A Deeper Look at the Omega Seamaster Ultra Deep

We break down the event that unveiled the Omega Seamaster Ultra Deep and think about the future.

It’s been days since the reveal of the Omega Seamaster Ultra Deep at the British Museum in London, but the event left a lasting impression with me.  For certain, the creation of a watch able to withstand 15,000 meters of depth was extremely impressive, but there were other things at work that made this day significant.  Like every other site, we were Johnny on the spot with an article once the embargo dropped, but let’s now take a deeper look at what happened that day, the reaction to the watch, and what we think might develop as a result. 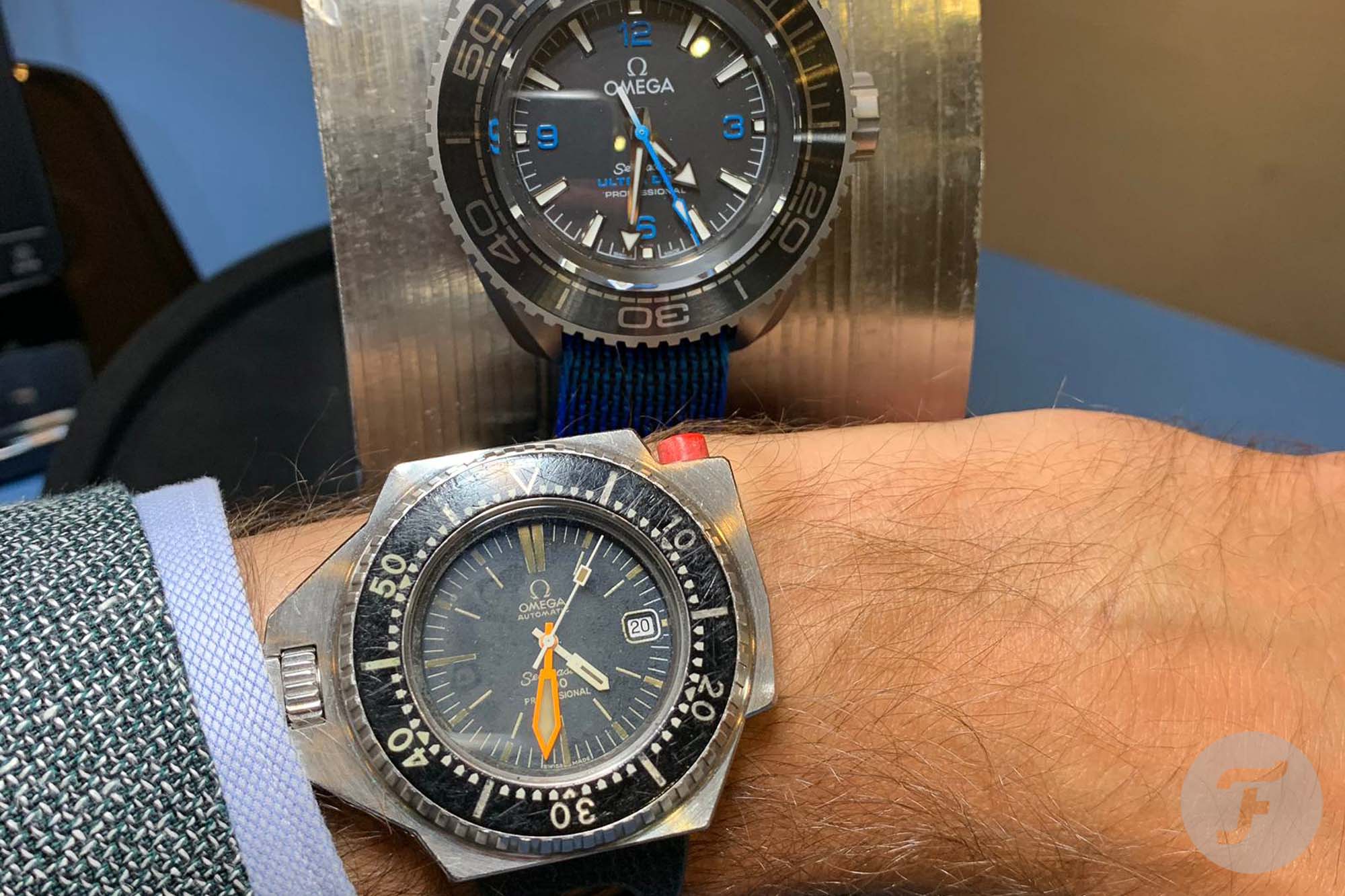 I love London and to those who know me, I’m not exactly subtle about how much I’d love to try living either there or somewhere relatively close to the city yet still within the UK.  As an American, there’s just something about visiting London, a city where at least I think I can speak the language.  The history, the quaintness, the service and the pubs all collude to create one of my favorite spots on the planet.  And so, when we were informed that The Big Smoke would play home to a press conference for the forthcoming Omega Seamaster Ultra Deep, I gladly decided to attend.  Of course, we didn’t know what was coming and so when the Ultra Deep did finally show itself, instead of passing this off as a bit of “that’s neat, but not overly relevant” technology, I think that most of us came away as quite enthused. But first, how did Omega organize the reveal? 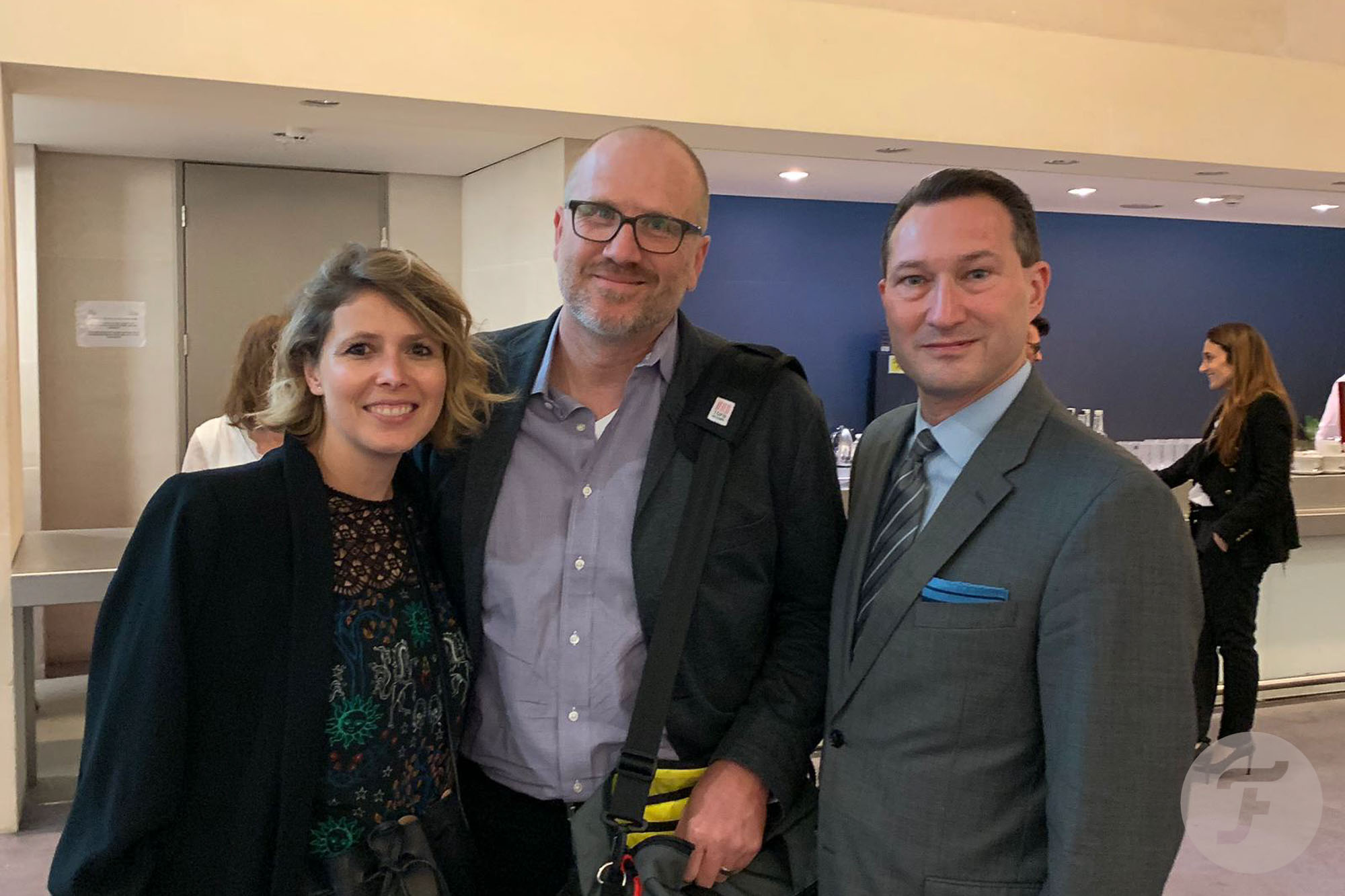 A Well-Organized and Efficient Day

For press releases, it’s rather typical for a brand to create different subgroups of attendees, so that interview sessions or photo shoots can move in parallel without feeling too crowded.  And so when I looked at the group I would move with, I was pretty excited to see that Jason Heaton (Hodinkee, The Grey NATO, and various other publications) was going to be there.  I ended up palling around with him for quite awhile and we even managed to use a scheduled break to slip off for a couple of well-sorted cask ales while discussing the Ultra Deep. 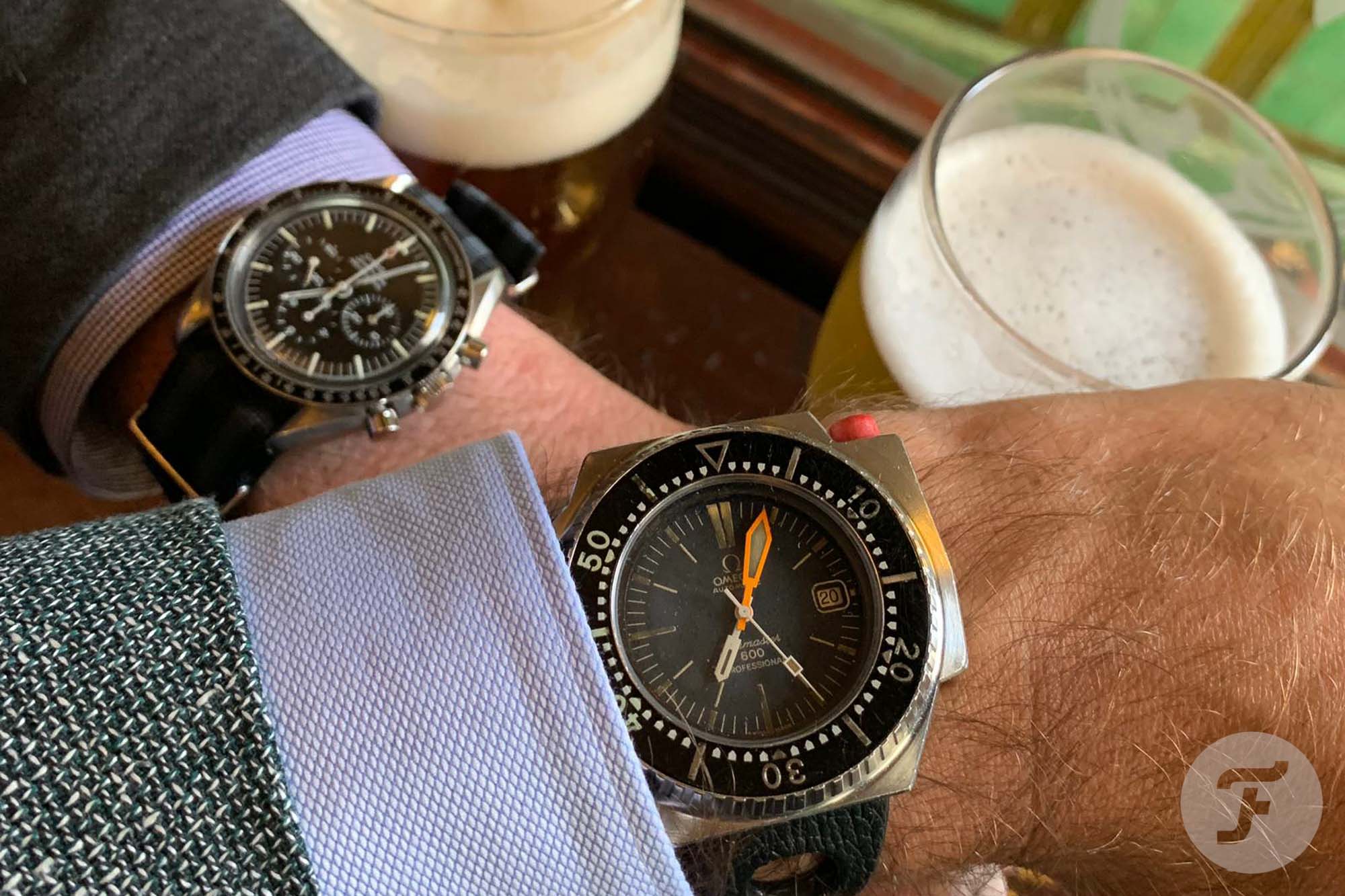 I also spent time with Mark Bernardo of Watchtime, another friendly and humble chap, and the always fashionable Silène Fry (Omega’s Senior PR Manager for the Americas).  We all essentially arrived on the Thursday (the Americans the night prior) and headed out for lunch.  At 2:30, we made our way to the British Museum auditorium and the press conference kicked off promptly at 3. 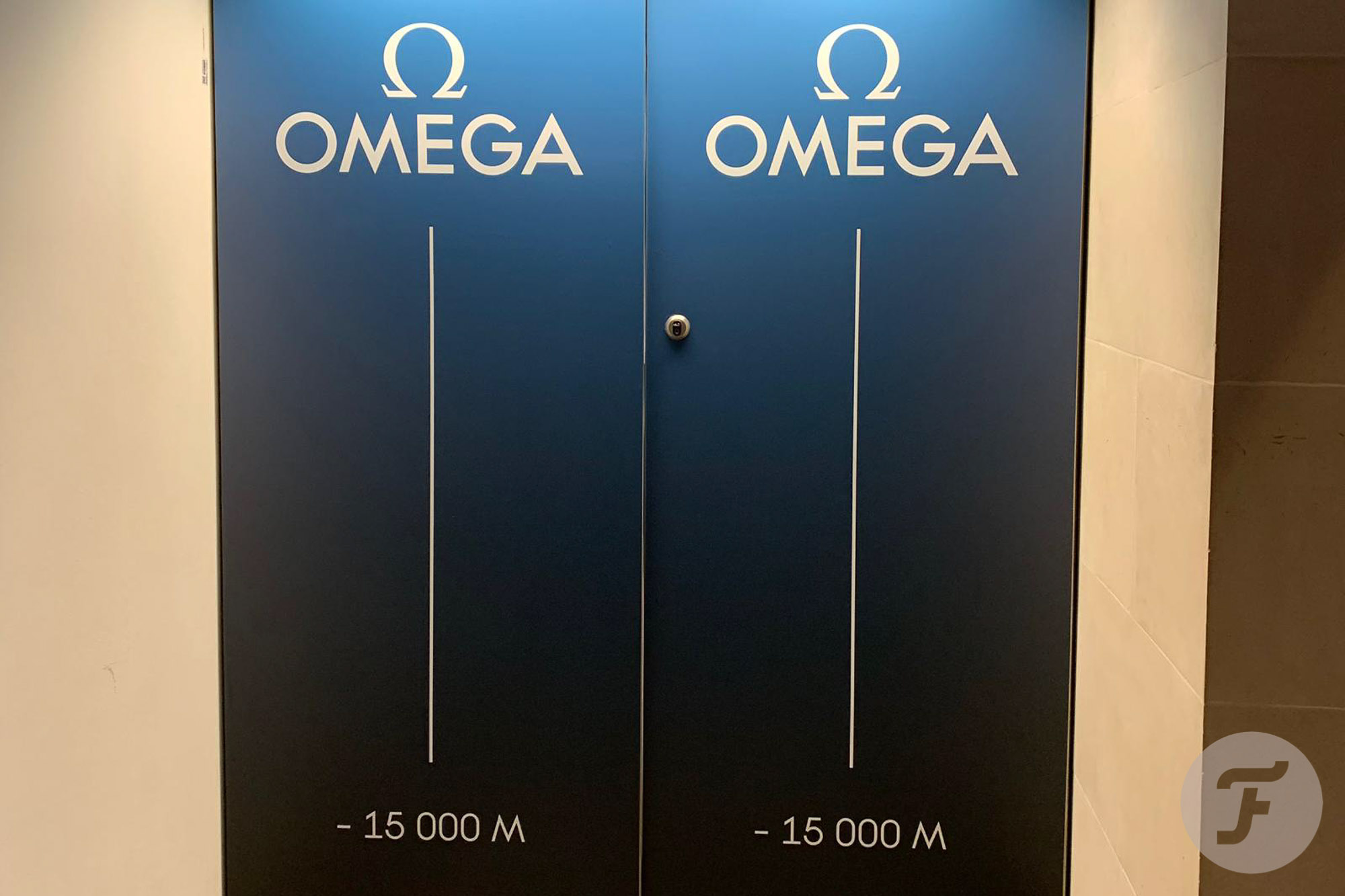 Now, at this point, despite seeing brand signage on the outside of the auditorium, we still had no idea of the Omega Seamaster Ultra Deep. 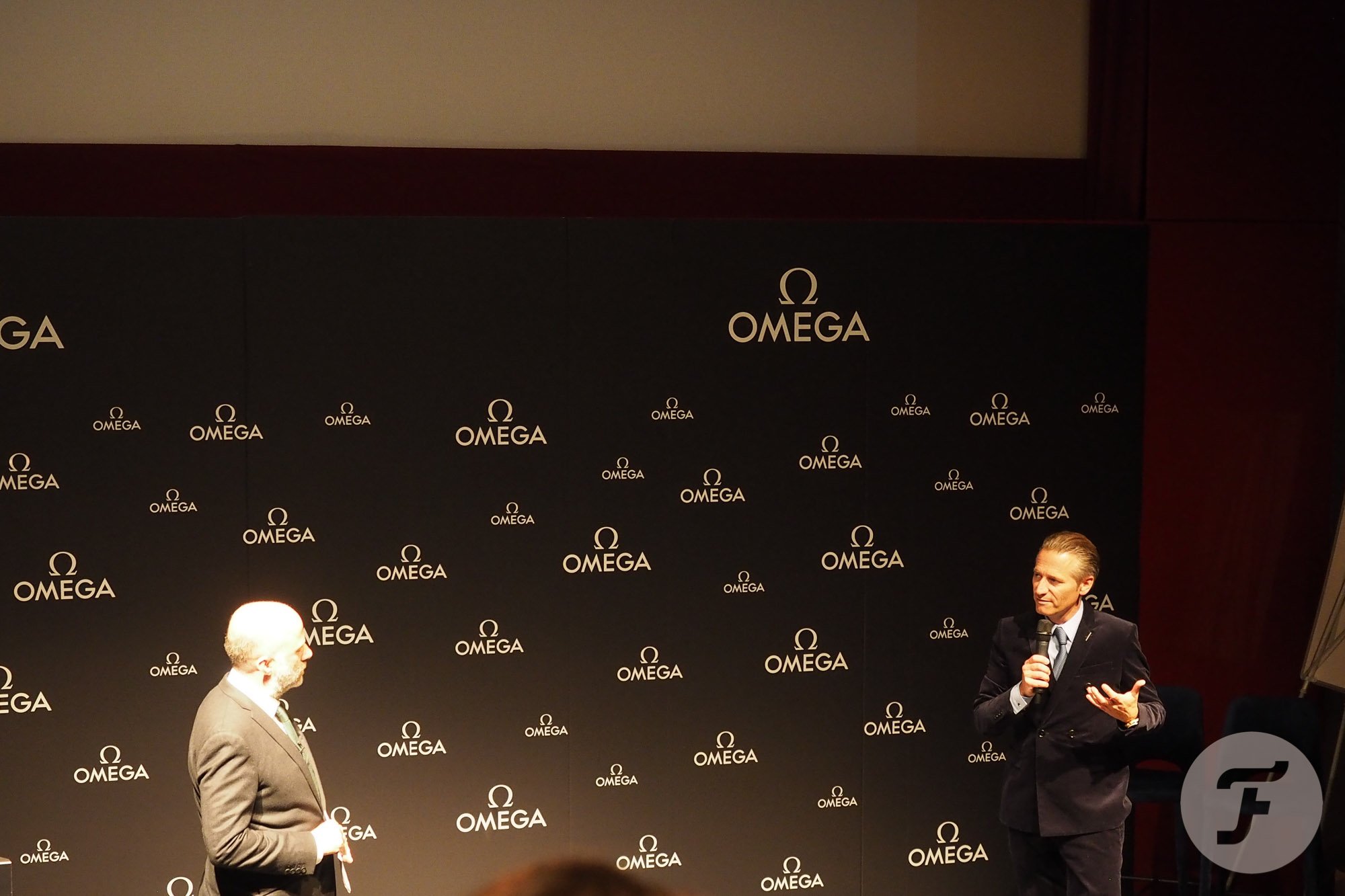 Talks, Interviews, and Some Photography

CEO Raynald Aeschlimann kicked off the event and relayed to us that what we were about to see was really something that Omega needed to be a part of and that the brand and its people deserved to have its name associated with the record breaking feat that we would soon discuss. It was a humble, yet passionate discussion – something we’ve become accustomed to with Mr. Aeschlimann. 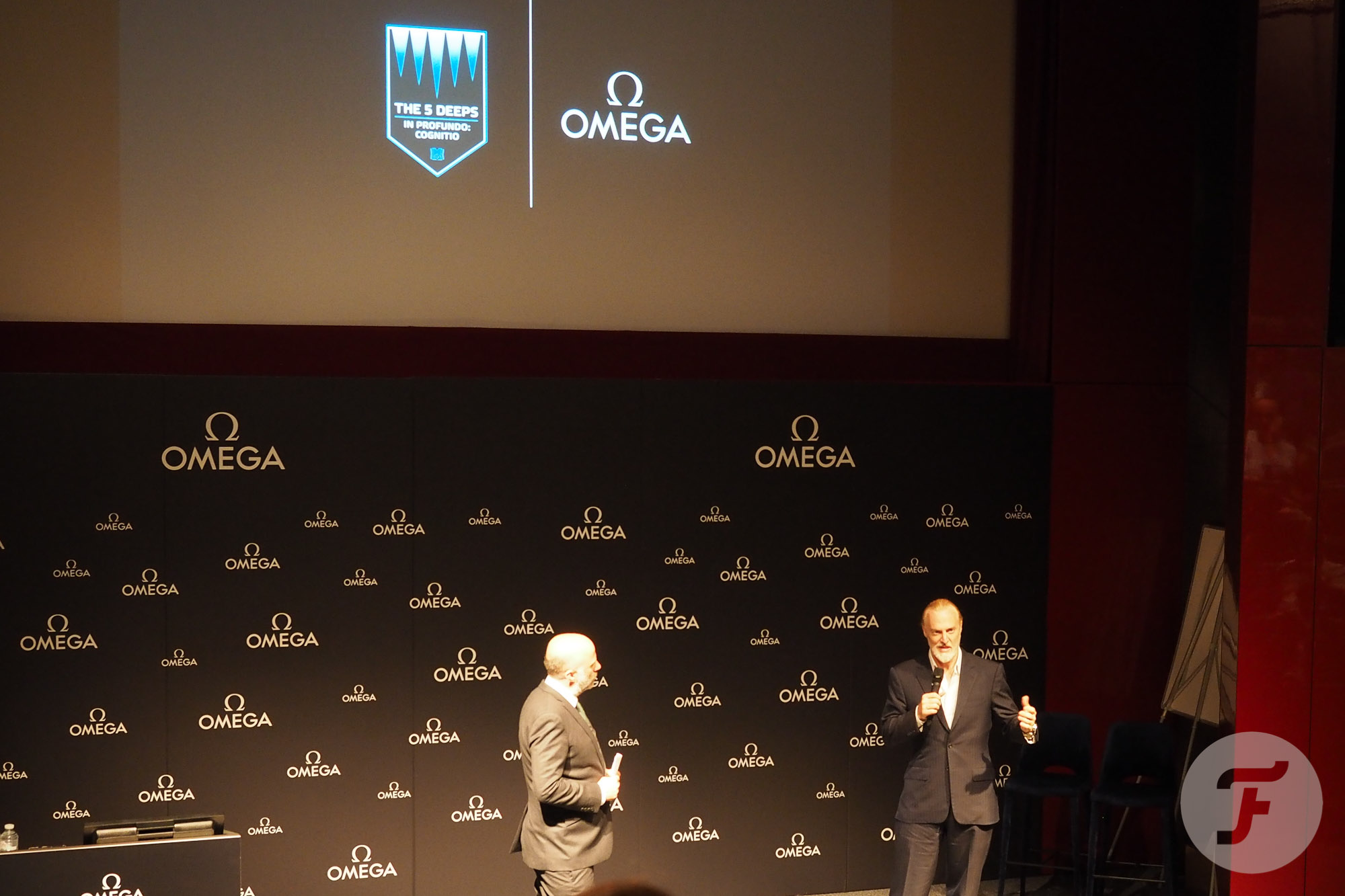 Then, we heard from Victor Vescovo, who was introduced for the first time along with his project to build a reusable manned submersible that would attempt to reach the deepest points of each of the five oceans.  Now, if you’ve watched enough Bond films, you probably have an idea about what a well-to-do gentleman with a slightly eccentric hairstyle might sound like. Well, scratch that from your memory because Vescovo was extremely down-to-earth and one could tell that he was and is very heavily involved in his quest.  From the engineering details down to the spirit of learning more, he came off as the kind of person you’d want to get to know.  It’s funny because in our roles at Fratello, we often talk about hoping that we like the brands we work with and we obviously like Omega.  Yes, we love the watches, but the people are approachable and it seems that they’ve found an equally humble person in Vescovo.  But still there was no Omega Seamaster Ultra Deep. 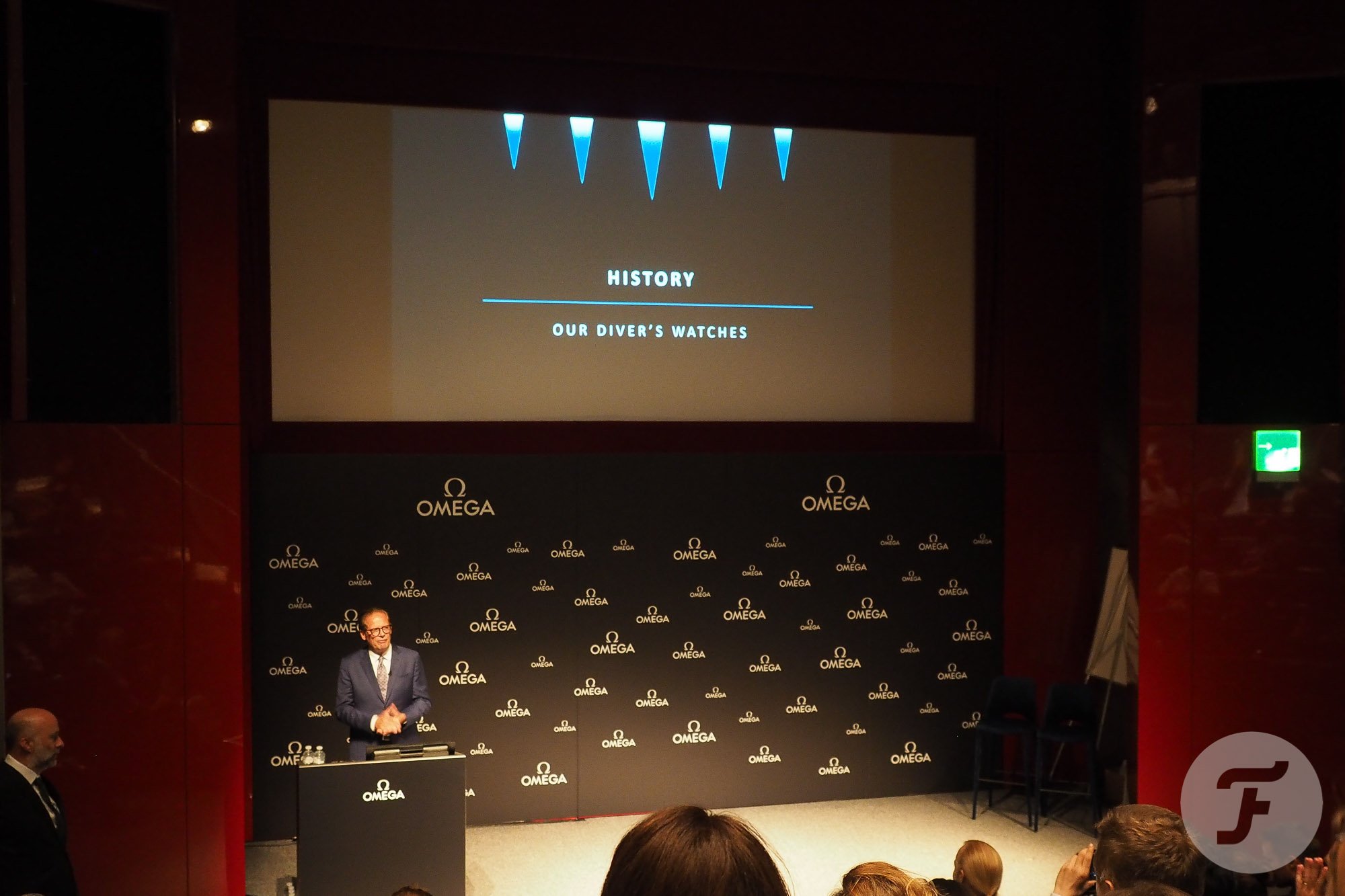 Next, we heard from Jean-Claude Monachon, Omega’s VP and Head of Product.  He walked us through Omega’s history of dive watches starting way back in 1932 and, of course, spending serious time on such legends as the Seamaster 300 and Ploprof 600.  Finally, he ended at the main event, the Omega Seamaster Ultra Deep. 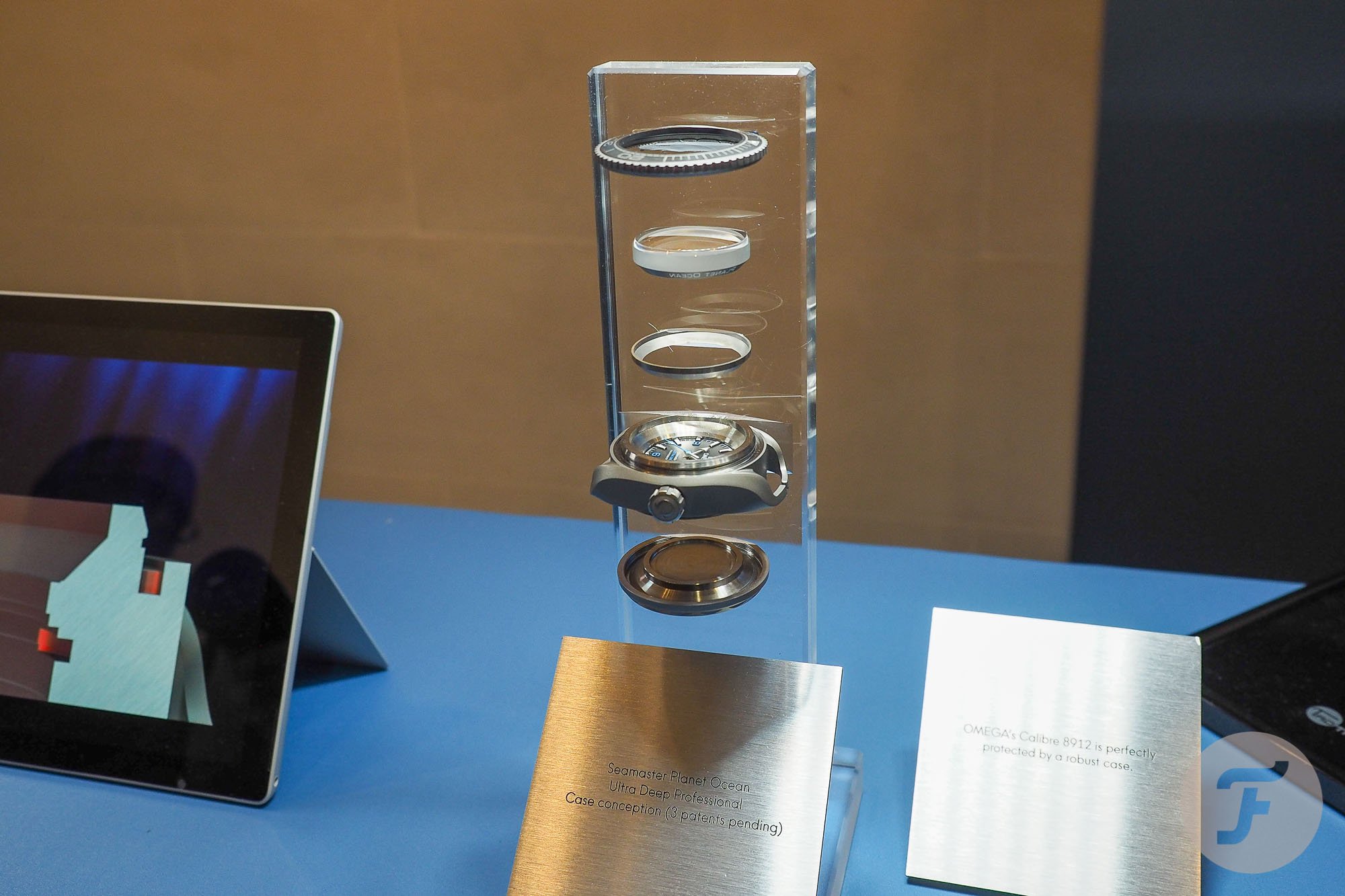 But, we weren’t allowed to see it until Omega’s Head of Design, Gregory Kissling explained the design of the watch and all of the requirements the team needed to take into consideration when making such a deep diver.  Naturally, a lot of time was spent on the use of Liquidmetal to bond the crystal to the case, which kept things thinner while eliminating the need for polymer seals. At the end, we were shown the watch and while there were no gasps, there was an undertone of chatter as people exchanged first impression thoughts. 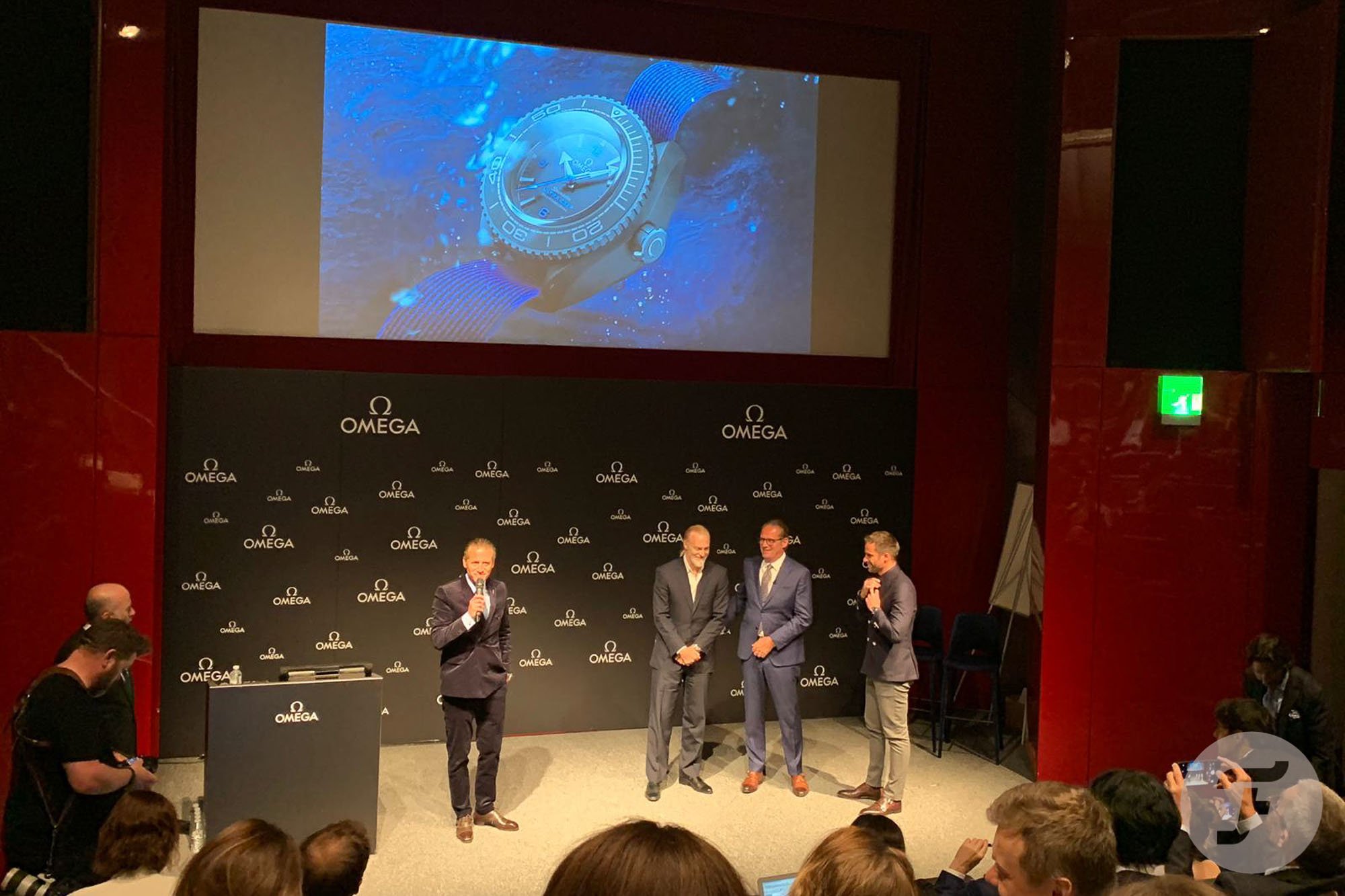 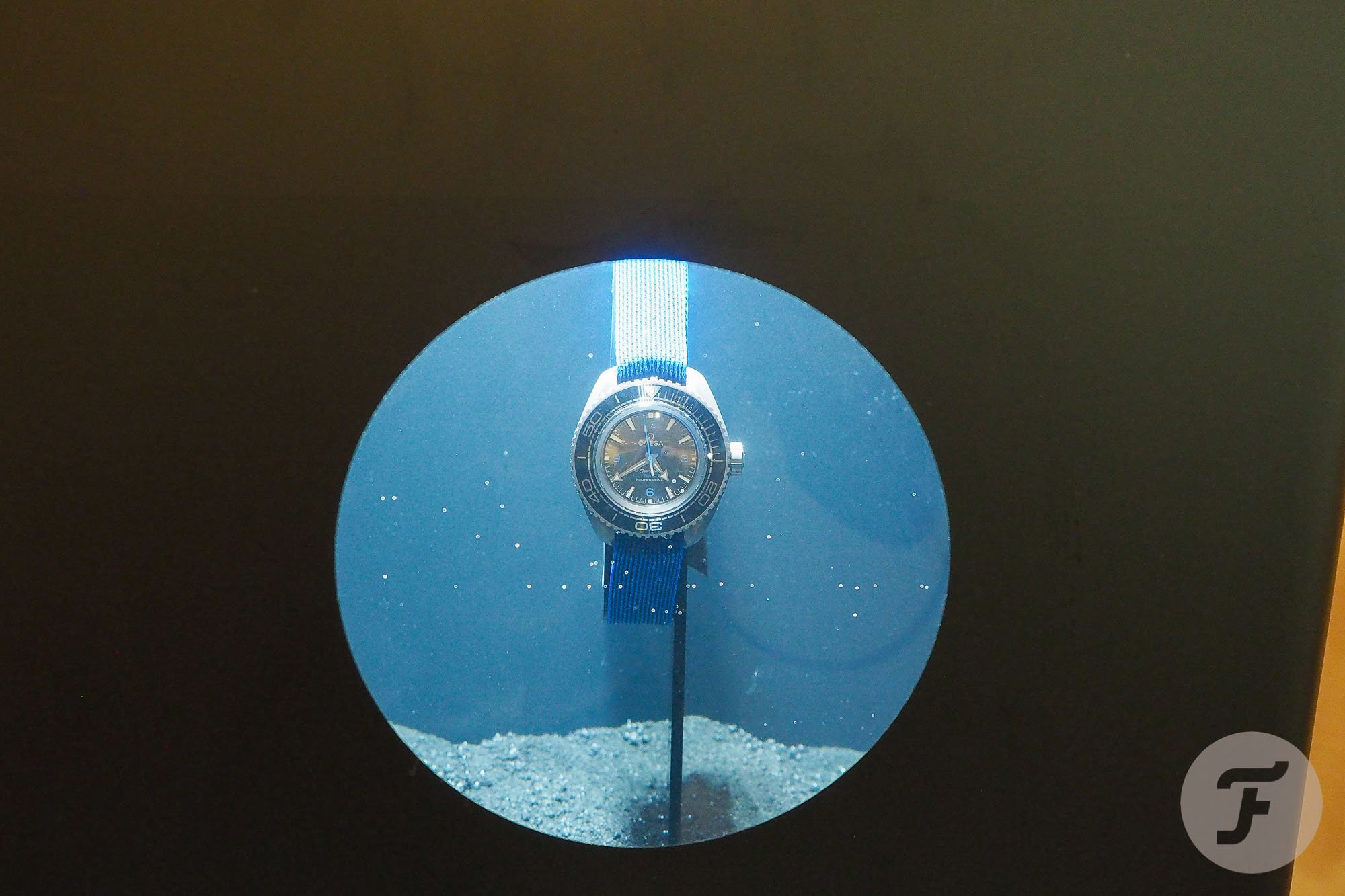 And even though we couldn’t handle the watches, two were mounted on pieces of the submersible’s titanium hull and the final one was in a tank of water.  That lone “wet” piece was the one that spent over 50 hours at the bottom of the Marianna Trench when one of the landers failed to resurface. 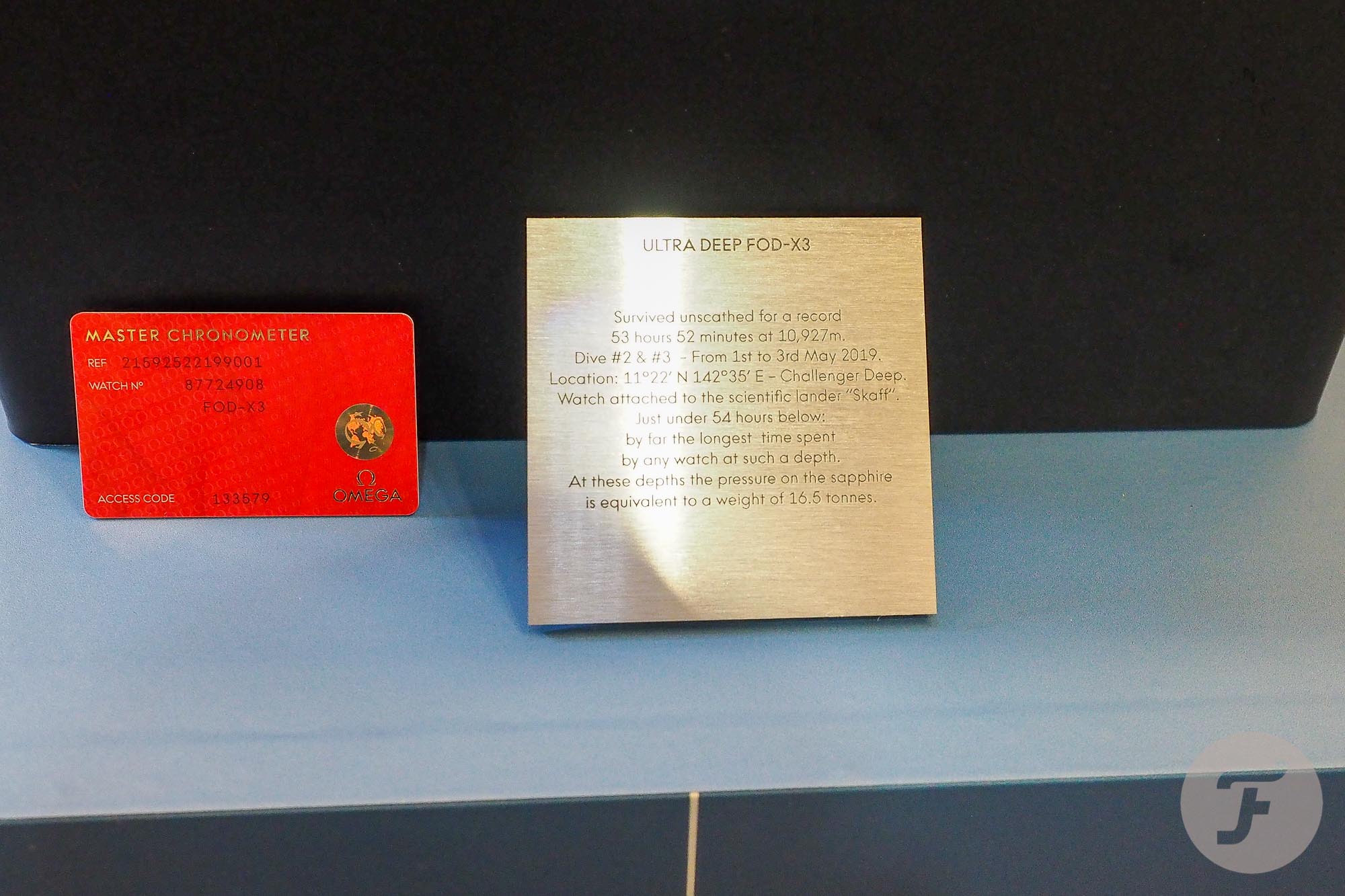 You can see the tank and the plaque above explaining what the watch dealt with while being submerged. 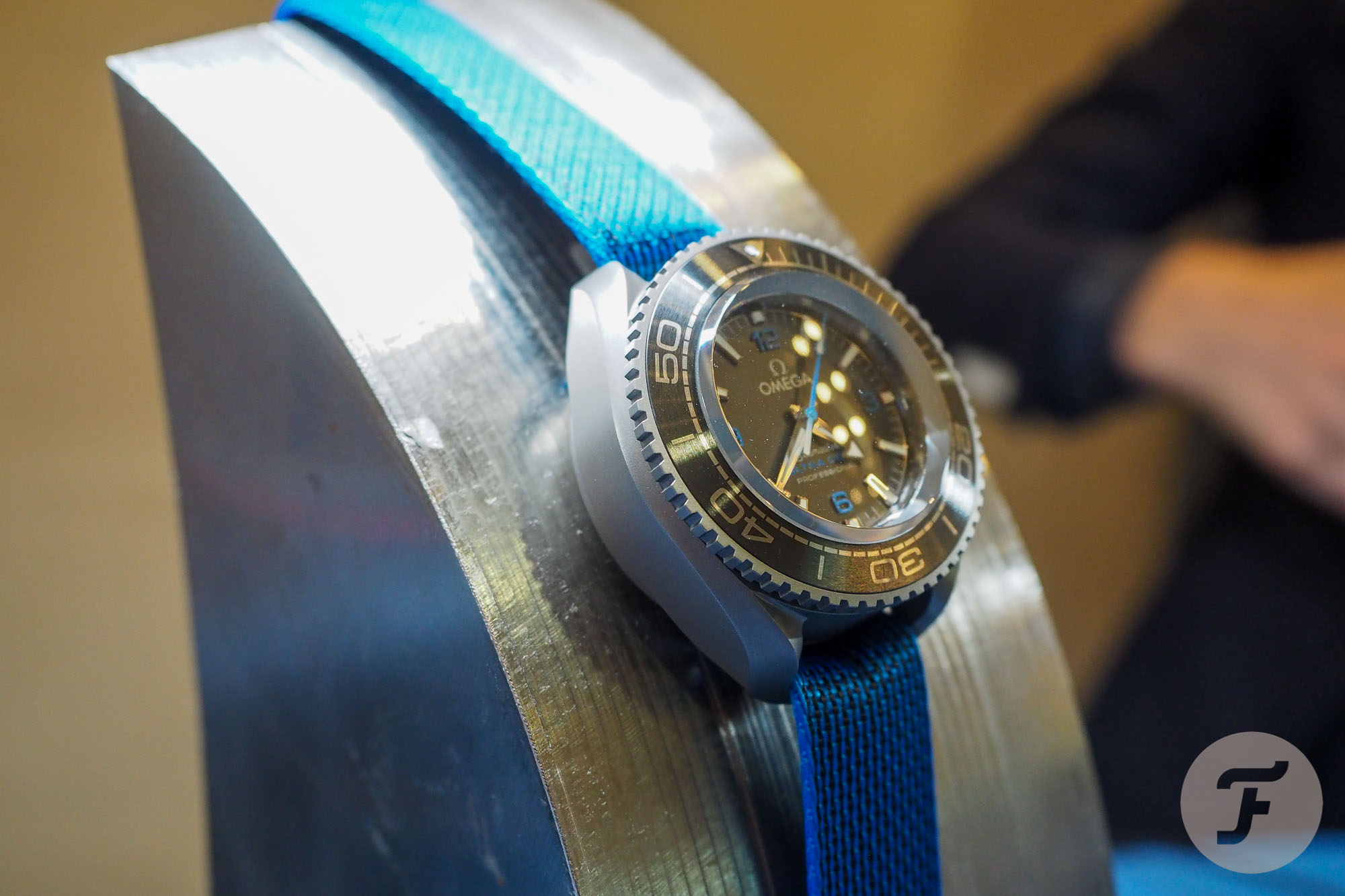 After these sessions, we went back to the hotel and this was when Jason and I slipped out for a couple of hand-pulled ales in a local free house.  Dinner was close by and aside from it being excellent, Mr. Vescovo walked around to each table and guest and gave each the opportunity to hold one of the three Omega Seamaster Ultra Deep models.  It was dark in there, so my pictures weren’t great, but it was neat to hold this behemoth that had survived the depths.  That effectively capped the night.  All in all, it was a perfectly organized day with just enough time to listen and see, but it was far from boring. 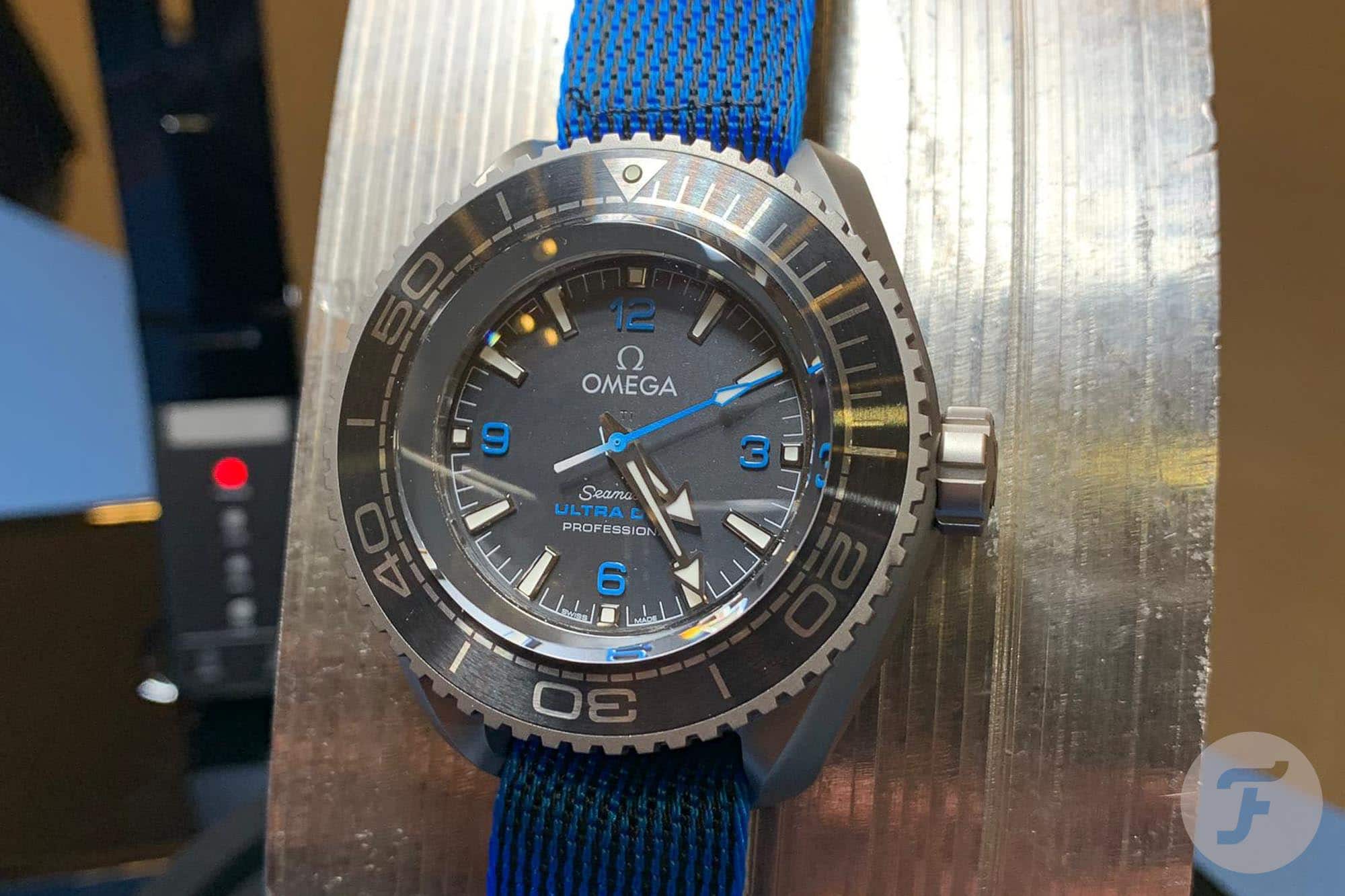 What We Learned and What We’re Hoping

First off, the Omega Seamaster Ultra Deep release was done to help celebrate Victor Vescovo’s 5 Deeps Expedition (he has one more ocean to conquer and will stop at the wreck of the Titanic along the way) and to show off Omega’s technical prowess.  But we think and hope there was more to it.  Regarding the watch, let’s just get it out of the way – people loved it.  Now, when I say they loved it, they may not have actually loved “it”, but they were excited about what it could become.  After all, a 52.5mm, 28mm thick, 225 gram beast isn’t practical for anyone this side of Schwarzenegger, but we saw things we liked.  I’m interested to see if this Liquidmetal bonding can translate into a production-ready and cost-effective solution.  If it helps in slimming down Omega’s slightly thick divers, it’s a real win.  As an added bonus, inscribing the model name in the Liquidmetal, thereby making it look as if it’s etched into the crystal, is a really nice touch.  But what else was there? 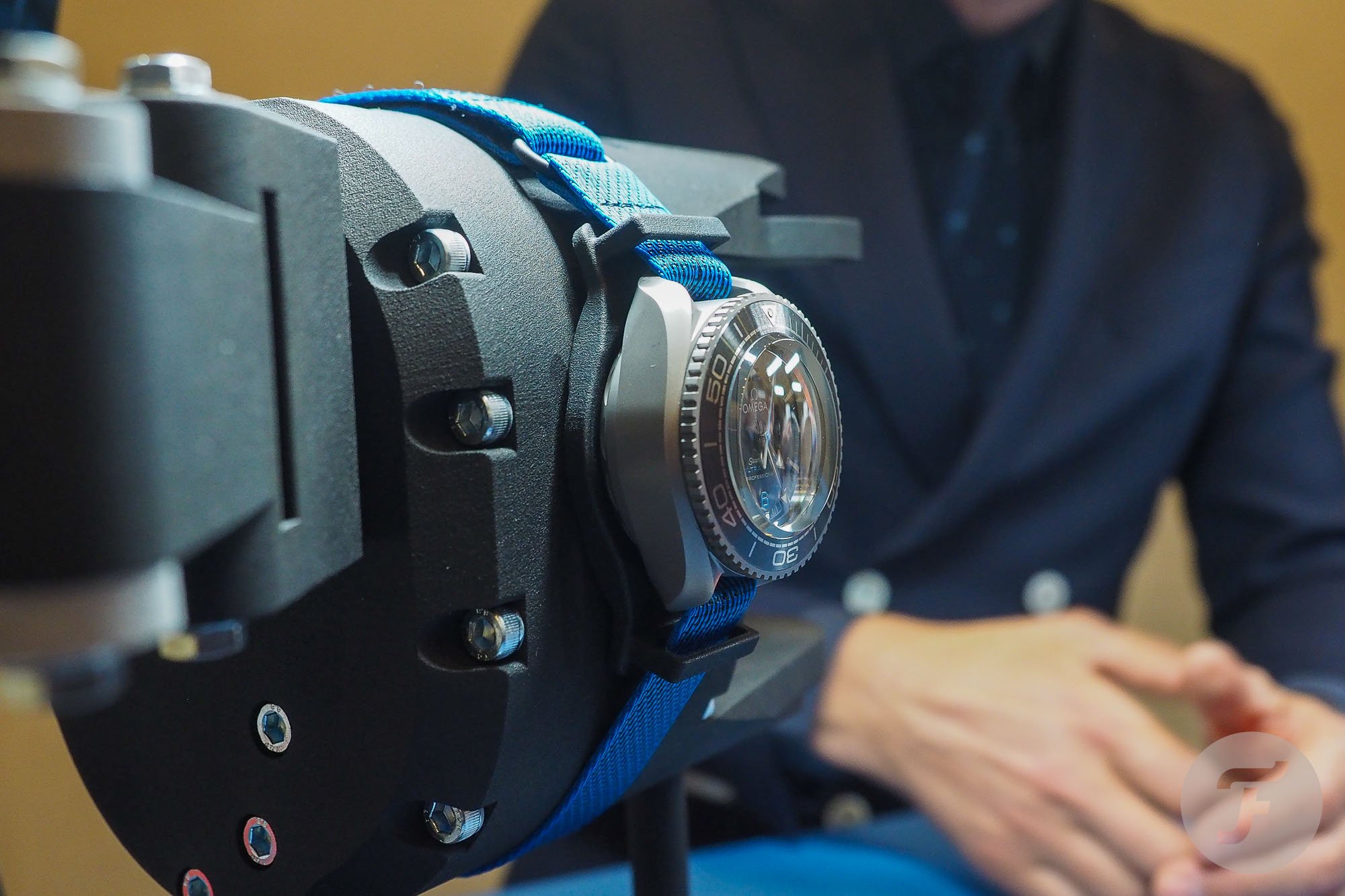 People, myself included, went gaga over the color scheme of the Omega Seamaster Ultra Deep.  As part of the Planet Ocean family, we’re used to seeing some fairly bright colors, but this blue, grey, black and white didn’t disappoint.  It was serious enough looking, yet visually intriguing enough to catch the eye.  I know that Omega already employs blue on a black ceramic-cased Planet Ocean, but this aqua looked entirely different.  And then there was the elimination of the date window.  For the purposes of Vescovo’s quest, a date was viewed as extraneous, but damn if that dial didn’t look the part.  But for me, the best part of the design was the lack of a helium valve.  Look, Omega sells a lot of watches and they probably don’t need any advice from peanut gallery members such as me, but the Ultra Deep looked so good without the protrusion that 99.9999999999999999999999% of people never use.  I’ve long thought that Omega’s case designs for its divers are amongst the best.  After all, head back to the mid 60’s and feast your eyes on the Seamaster 300 because this is tbe birthplace of all Omega twisted lug diver cases .  Yes, this is the kind of case that can rival a Rolex, but to me the valve breaks up what is otherwise a flawless beauty. 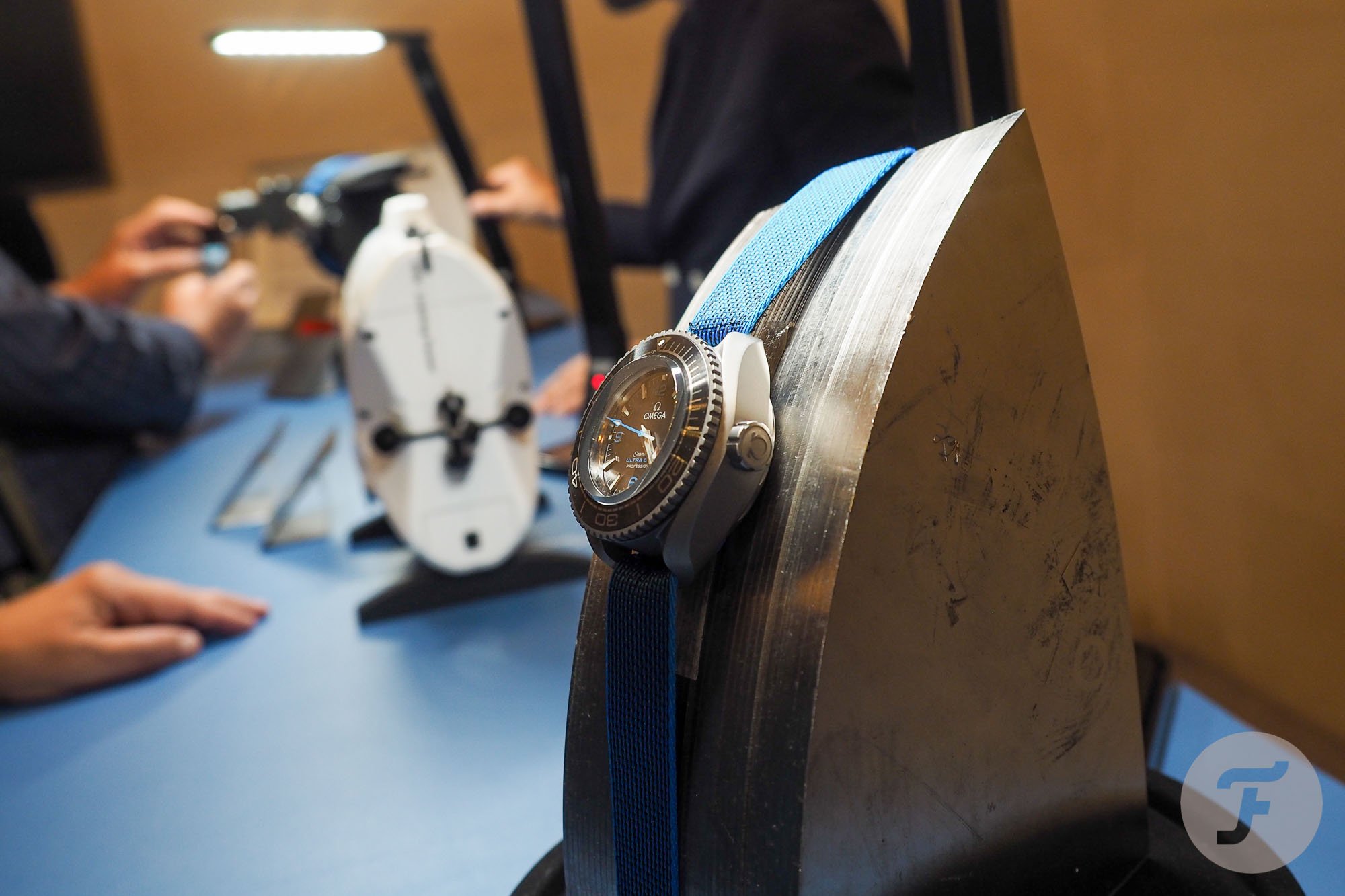 You can call me a lot of things, but shy generally isn’t one of them.  I was respectful, but in the group interview, I went for the jugular with Mr. Aeschlimann and asked what we could possibly see in the future on “normal” models as a result of the Omega Seamaster Ultra Deep.  Raynald skillfully reminded us all that 2019 is truly the year of the Speedmaster with the 50th Anniversary of Apollo 11, but he later mentioned that there were a number of things under discussion.  Let’s see, but something based on the Ultra Deep in what I hope will turn out to be a reasonable size seems like it should happen. 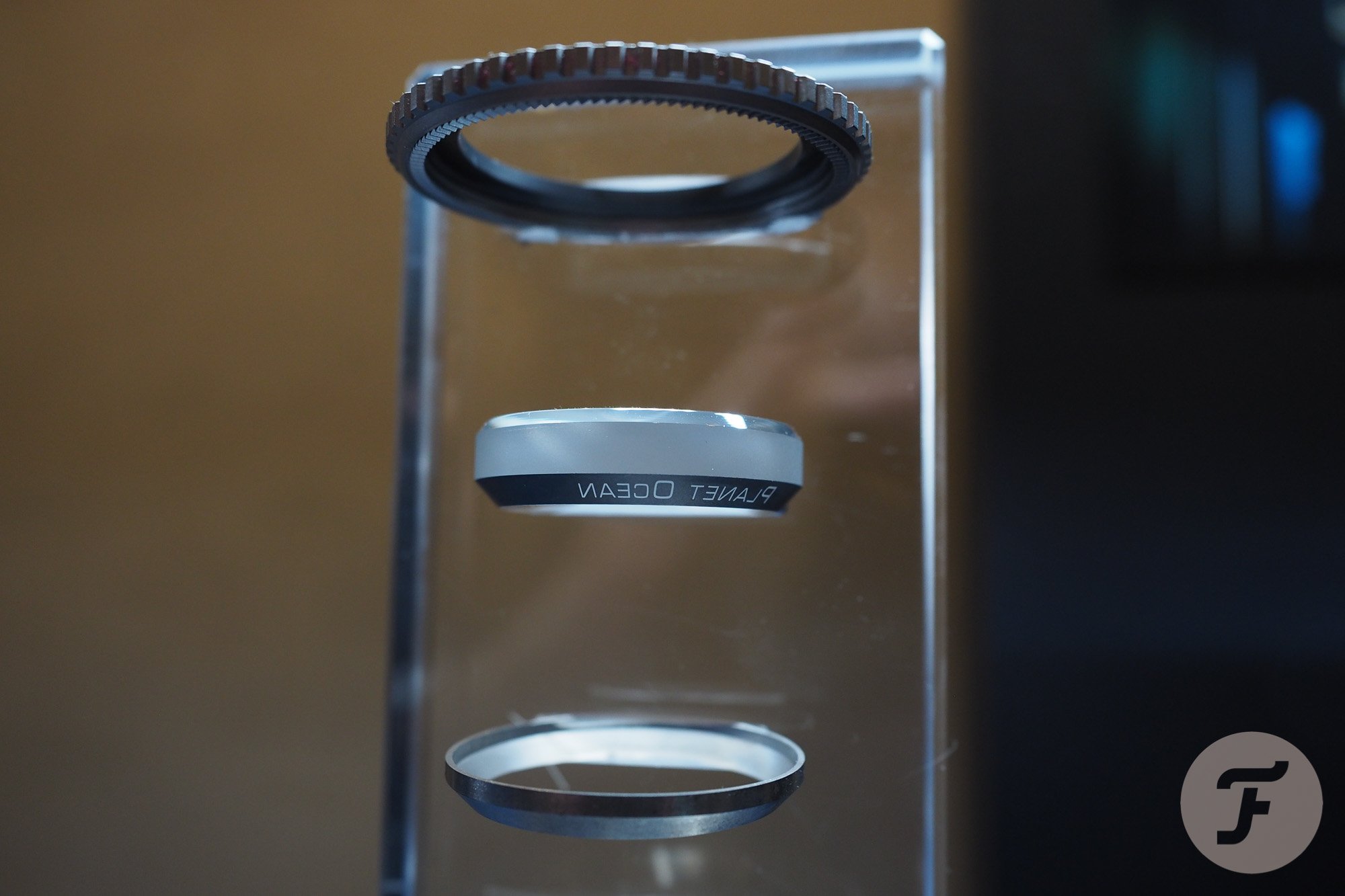 In the end, we walked away with nothing concrete as a result of the unveiling of the Omega Seamaster Ultra Deep, but it was extremely clear that Omega wanted this piece to tie in heavily to the Planet Ocean line.  Despite the challenges faced at 10,000+ meters, I am sure they could have gone down a very different design path and the fact that they didn’t will hopefully mean something good for us.  Regarding the quest itself, I said it before that it’s great to see one of the largest high-end sports watch companies still hunting for records while aligning itself with what appears to be a genuine figure.  The event was great, the innovation was even better, and the watch was best.  Let’s hope that 2020 brings something we all want to strap to our wrists.

For an official look at the Omega Seamaster Ultra Deep and its record-setting dives, head to the Omega site.

Hot Topics
Laventure Automobile Chronograph With A Proprietary Movement — Marking A Huge Leap Forward For One Of The Industry’s Most Promising Brands
155 comments
We Talk To Swatch Group CEO Nick Hayek About The MoonSwatch
93 comments
Fratello Exclusive: An Inside Look At The MoonSwatch Production Facilities
75 comments
Selling Your Watch To A Dealer Or Trading It In — Tips From A Former Watch Dealer
49 comments
Summer Splash — Round 2 : Jorg’s Tudor Pelagos FXD Vs. Lex’s Hublot Big Bang Integral Ceramic Sky Blue
48 comments
Popular
(From The Archives) Shut Up & Read The Truth About Cartier Watches
George Cramer
21
#TBT Seiko H558 Arnie – One Serious Diver
Michael Stockton
23
Why You Can’t Go Wrong With The Rolex Datejust
Robert-Jan Broer
3