The next generation of horologists is almost ready to service your watch!
Daan de Groot
comments 6
Share

At some point, don’t we all dream of being a watchmaker? I mean, how cool would it be to service your own watches or check a secondhand watch’s movement before you decide to buy it? I guess I’ve missed the opportunity to take that career path, but sometimes I still think about taking an evening course to at least get an idea of what’s actually going on inside my watches. That’s why I decided to take a look at the watchmaking school in Schoonhoven, the only one of its kind in the Netherlands.

Well, to be fair, I didn’t actually decide to go all by myself. Last month, at a RedBar meetup in Amsterdam, I met two of the school’s teachers, Brendan and Hilbert. As I showed quite a lot of interest, they kindly invited me over to Schoonhoven, which is also called Silver City and is home to the Dutch Silver Museum. They would show me around the facilities and would make sure I could get a feel for what it’s like to be a watchmaking student. And that’s exactly what they did. I went there last week, and I must say the visit didn’t exactly cure me of my longing to become a watchmaker! 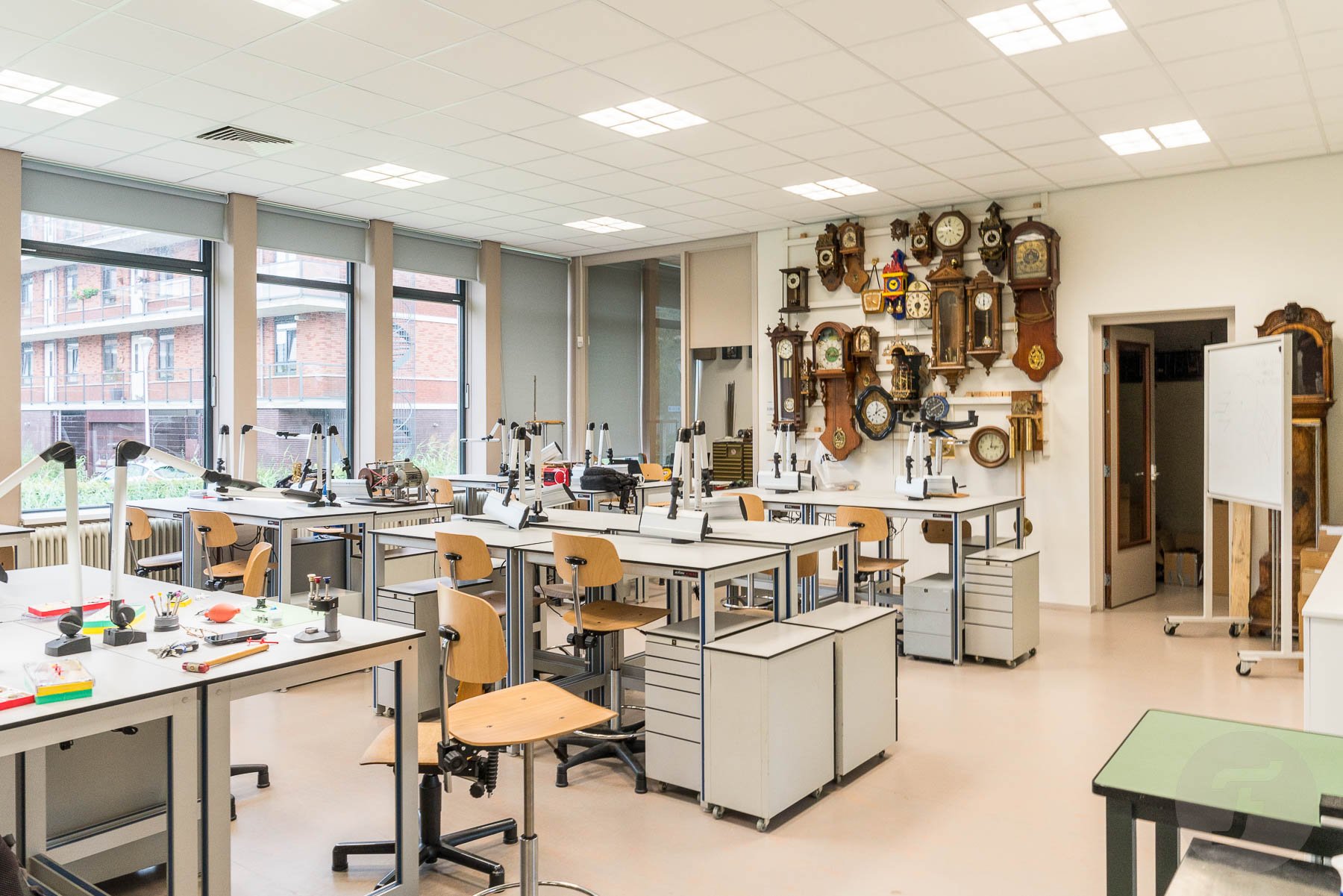 I guess I’m in the right place

Watchmaking is certainly not the only course they teach at the Zadkine vocational school in Schoonhoven. You can learn how to become a gold or silversmith, and they teach you all about how to become an all-around jeweler. But I was there for the watchmaking, of course. So when I walked in and saw a Rolex Submariner on a student’s wrist, I knew that I had come to the right place! And that certainly wasn’t the only (luxury) watch in the building.

At the beginning of this year, I was teaching as well. No, not watchmaking; I was working at a high school, so obviously, it was at an entirely different level. But there, very few of the students wore a watch. So I knew I was dealing with a different kind of people here. But before we entered the watchmaker’s class, Brendan, their teacher, showed us around the building.

We passed several classrooms in which various aspects of all the different crafts are taught. In some, students were sitting at high workbenches, designing their next projects with clay. In others, I had to put my hands over my ears to not be deafened by the hammering on the anvils. And a little further down the hall was a room full of 3D printers, which allow students to print their initial designs and see whether they work in real life.

And yes, there are also some “more classic” classrooms with computers where students learn how to make 3D models of their creations. But in general, the school looked a lot more hands-on than the school where I got my degree in anthropology (which, of course, was a more theory-based education). I must say, however, that I was quite jealous when I saw all those classrooms with ovens, microscopes, anvils, and 3D printers. But what really made me jealous was to see the students who were actually making and constructing things with their own hands. And that feeling only increased when we entered the watchmaking classroom. 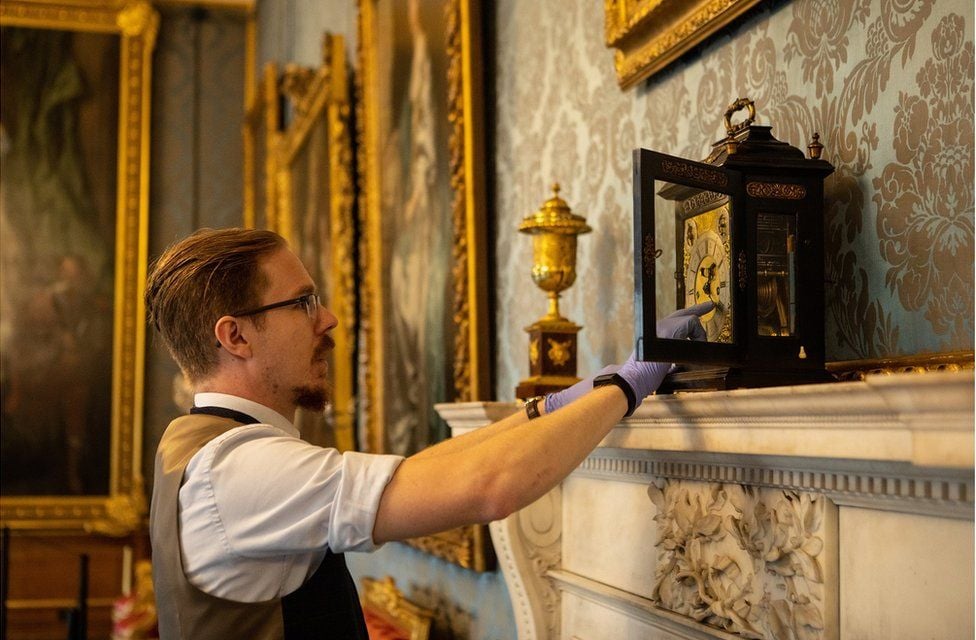 Something to be proud of

Even before I entered the room, I could already feel how proud the teachers were of their students. On the door, there was a newspaper clipping of an article about former student Fjodor van den Broek. He is now in charge of maintaining the hundreds of clocks owned by the British Royal Family at Windsor Castle. But there was also a big poster on the wall picturing a Grönefeld watch because Tim, one of the Grönefeld brothers, also got his watchmaker’s degree here. So I guess the expectations are quite high when students take their places at the workbenches in this room.

At one side of the room were the second-year students. I expected only to see guys at the here, but there were certainly also female apprentices. The students were servicing watches and clocks from their family and friends. But what they also often do is buy a non-working vintage watch, service it, and sell it on to earn some money while studying. Now that’s a neat little side gig, right? 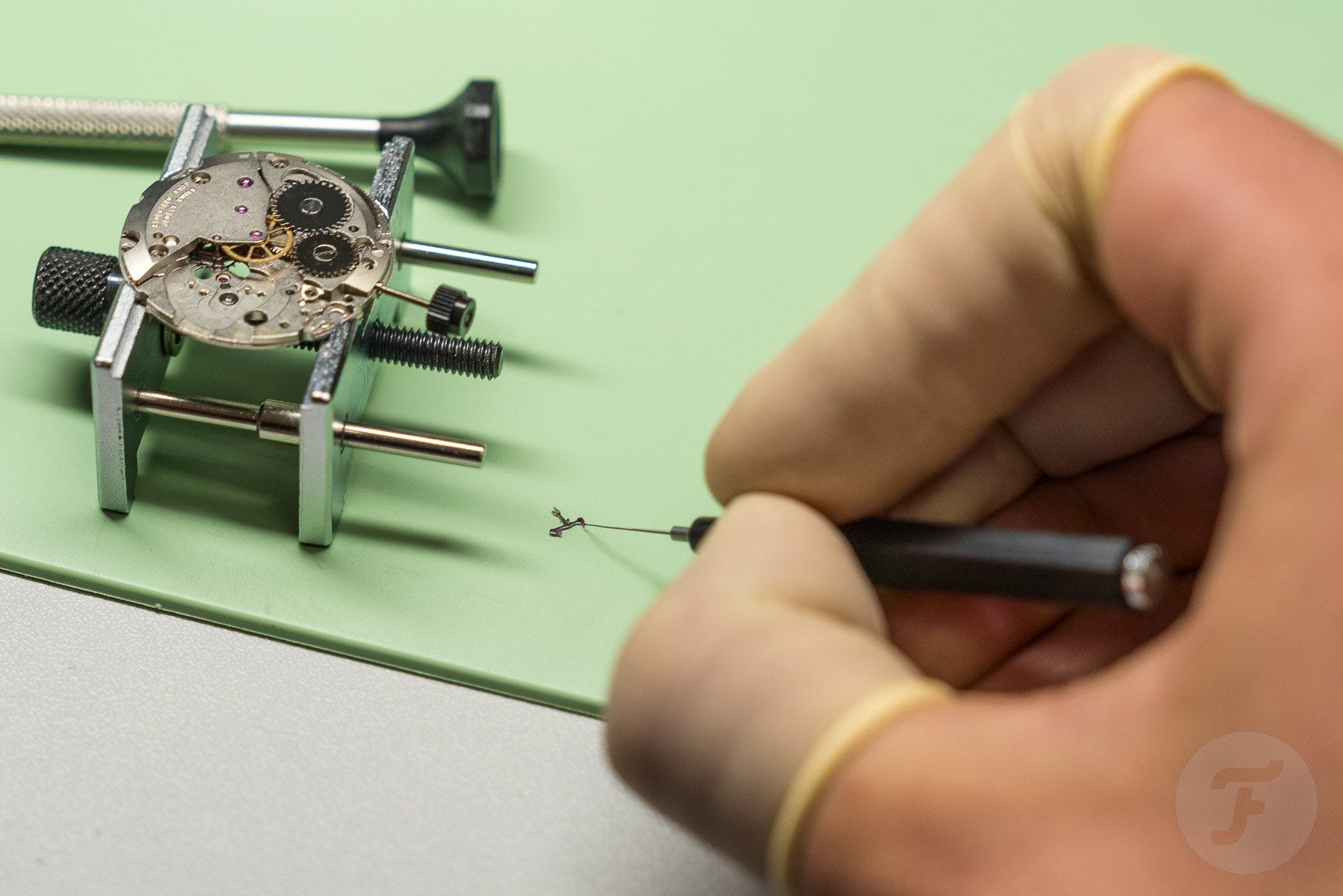 But before they get to service anyone’s watches, the students have to pass multiple exams, of course. One of them involves the very precise oiling of an escapement’s anchor. They even showed me on the spot what that means. I wish all of them good luck on their next exam!

On the other side of the room, there were the graduate students, who were working on their final projects. One of them was Tim, who was working on his own clock. He built the whole thing by himself, using parts from an existing movement. But he was also manufacturing his own parts because he wanted to integrate a moving ice-skating scene into the clock. As I saw the 3D-rendering classes earlier on, I expected him to have a whole digital file on his project. But when I asked him about it, he said he had only used his paper notebook and a compass to figure it all out. It’s no surprise that this young man already has his first job lined up. That goes for all of the graduates, by the way, as watchmakers are highly sought after. 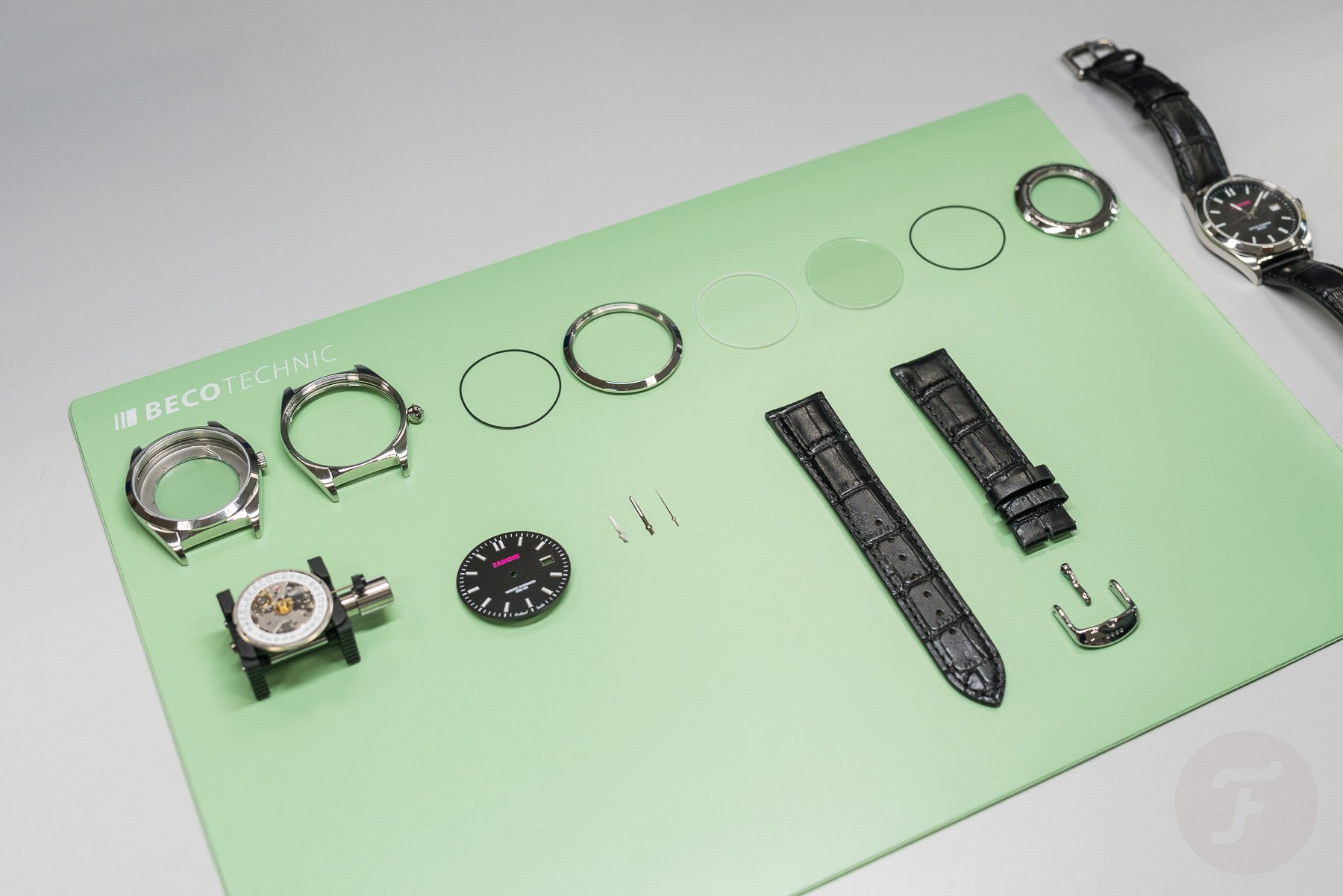 What I also found very interesting was the “school watch” concept. At the start of their degree, every watchmaker’s student gets a “school watch” starter kit. Throughout the four-year program, they are taught everything that’s needed to manufacture a watch like that. And although the movement is handed to them in one piece, in the end, they’ll also be able to completely service it themselves. But it doesn’t end there. 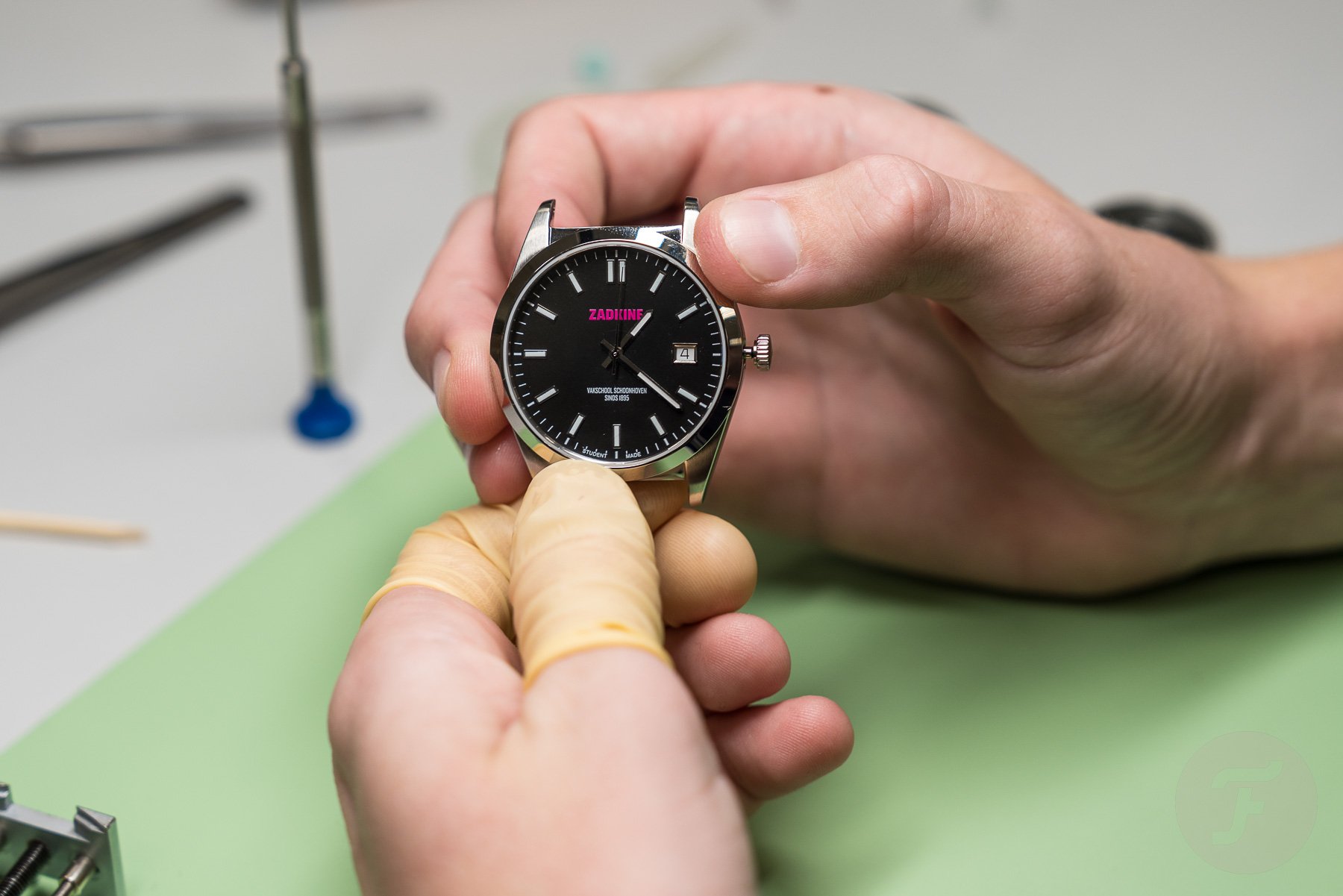 When the watch is fully assembled, the students also learn the necessary skills in marketing and sales to start their own businesses. There’s even a classroom with an actual store design so that students can feel what it’s like to sell their own masterpieces. If you’re interested in the “school watch”, you can find more information on it here. You can even buy one of the watches there. Each comes with the guarantee that it has been serviced and assembled by one of the students. That’s why, instead of “Swiss Made”, all watches state “Student Made” underneath the minute track at 6 o’clock. 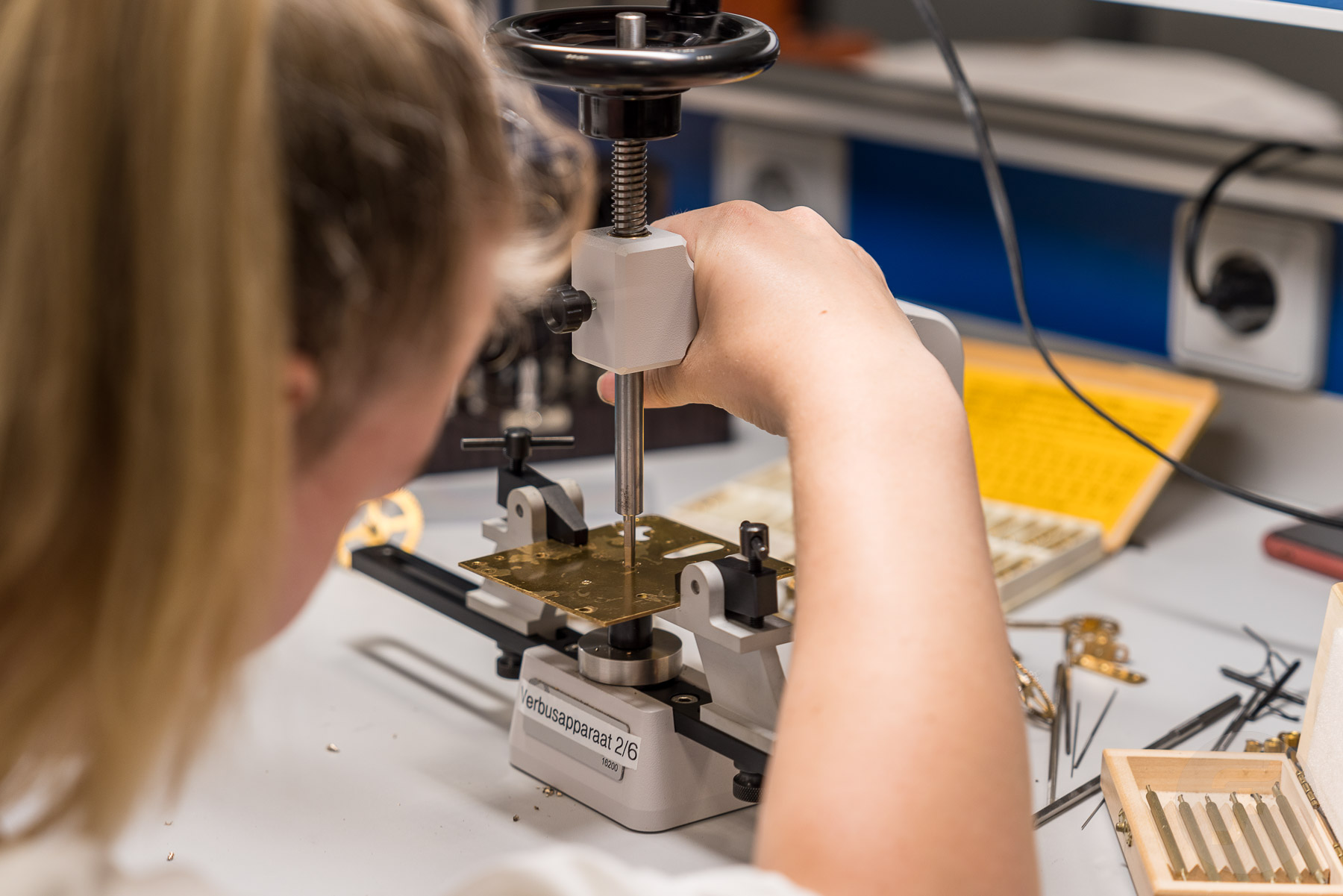 I can certainly recommend visiting a watchmaking school to anyone who is interested in watches and their movements. I had never been in a watchmaker’s atelier before, and it was fantastic to see the students fidget with all the tiny parts of their movements. But it was also great to see that there’s still a younger generation that will keep up the craft of watchmaking and everything that comes with it.

I’d like to thank Brendan and Hilbert for their invitation and hospitality. And, as I said before, I might be back soon for one of their evening courses!

Have you ever thought of becoming a watchmaker? Or do you prefer to leave that intricate work to the pros? Either way, do let me know in the comments!