A fascinating or silly invention? When a crown on the watch screws down, that’s usually a signal of higher water resistance. The Parmentier crown on the Accurist Marinograf screws down too. The problem is, that it also screws off. Like completely off. If you are not careful when unscrewing it you might end up totally scr**ed…

You know me, I like everything that went against the mainstream. And there was (and still is) so much yet to be unearthed in the vintage watch realm. It was just a few weeks ago that I learned, from one of you lovely readers, about the crazy Pierce Correctomatic watch. This particular piece uses chronograph-like pushers to control the regulation of the balance wheel. To name a few more odd-balls, check out the Lip Thermometer, a pretty unknown Citizen Challenge Golf, or the unbelievable winding system in Wyler Crichettino. 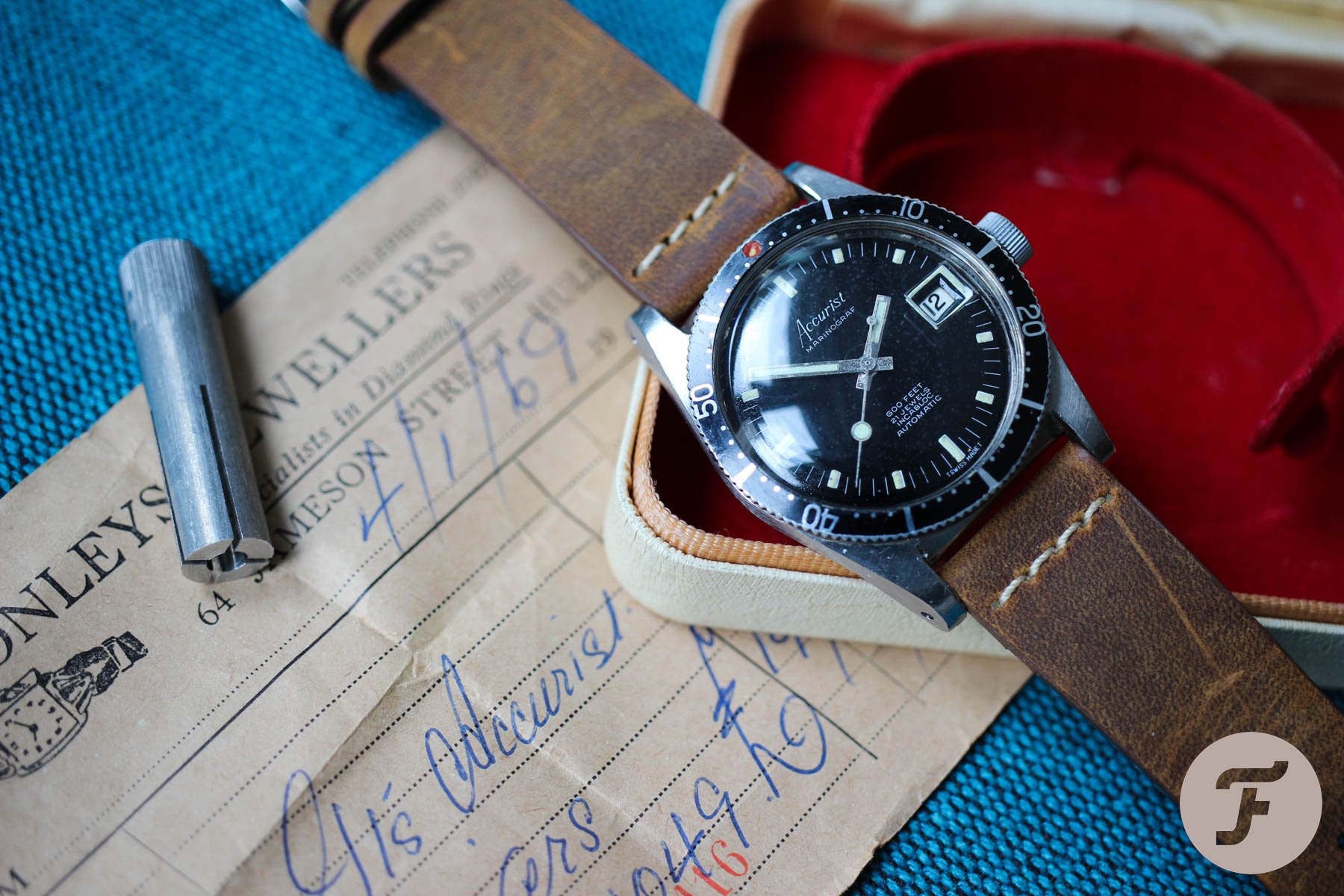 The Accurist Marinograf with a Parmentier crown

It’s just about a year ago when I featured TOP 5 peculiar watch inventions that never caught on, the so-called Parmentier crown was one of them. This particular execution featured today is really hard to spot, as it looks like your run-of-the-mill vintage diver with an ordinary crown. If you want a watch with one, you’ll have to put a few lesser-known brands on your auction radar and hope for a surprise to pop up someday. I recently received my surprise when my watch-friend  Haroon decided to let go of his full set Accurist Marinograf diver. Safely stored in its original box, the receipt with a purchase date was the cherry on top. The only missing piece was the winding tool. 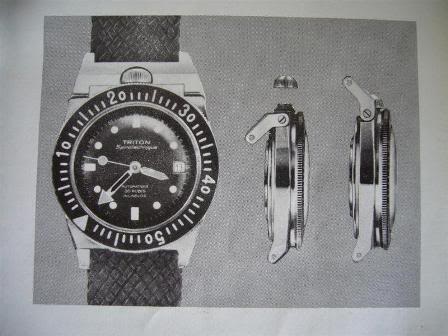 Jean René Parmentier was a former colonel of the French army and mastermind behind the “bending” upper lugs that create natural protection for the watch crown. His Triton watch was launched in 1963 exclusively through Spirotechnique’s dive shop. The design is so unique, it’s hard to oversee it. Once you folded the lugs back, you could access the crown. Well, the crown cap first, unscrew it and only then you got access to the actual crown hidden underneath.

Besides the famous Triton Spirotechnique, there were two other executions of the patented Parmentier system. In the picture above, you can see the Pryngeps diver with the semi-simple version. It’s neither integrated nor protected by the lugs, obviously, as it’s located at the usual position. It’s quite big and has a unique shape that attracts the eye instantly. The top, which looks almost like a squid beak, with tens of micro teeth is actually a notched tool. Once you unscrew the crown and flip it over, the toothed slot perfectly fits onto the naked crown. Voila, you don’t need a winding tool, the oversized cap itself makes winding easy. 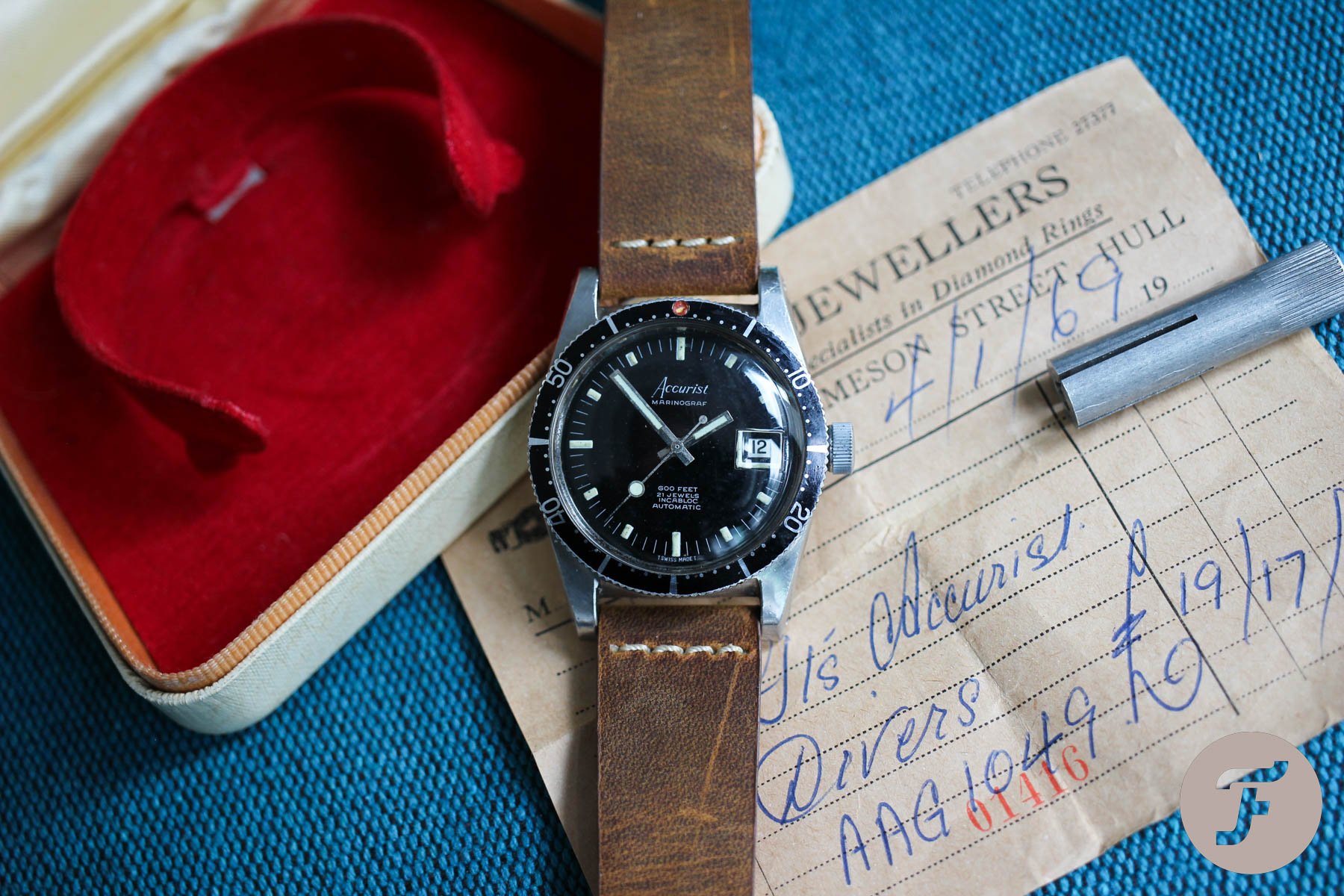 Finally, we get to the most basic Parmentier execution, as featured on the Accurist Marinograf. If someone wasn’t familiar with the concept of a Parmentier crown (or isn’t actively looking for one) I bet he wouldn’t have any suspicion there is something different about this watch. Looking at it from another perspective, it would be quite amusing if somebody bought this vintage dive watch without knowing about the crown system. The look of surprise on their face, upon unscrewing the crown off the case to find a smaller crown underneath would be priceless. I wouldn’t be surprised if half of the Parmentier crowns might have been swapped out for that very reason. Uninformed owners who thought they were dealing with a faulty crown.

I think all the pictures confirm my words when I say that this particular Parmentier version looks like a standard, rather unassuming, crown. With its simple flat style, it perfectly matches simple flat lugs that are slightly curved when you look from the side. But it is actually quite the opposite. Not even two full counterclockwise rotations are needed for the crown cap to slip from the threads and separate from the case, nestled between your fingertips. Unique and fun as the system is, I can tell you that I would not feel comfortable unscrewing it anywhere other than in the safety of my own home. Doing so out on the street might prove to be the last time you do it. If you drop the crown cap, chances are you will never see it again.

The threaded part of the watch case looks like an archaic diving suit and the actual crown looks like a head sticking out of it.

Once the crown cap is off, the Accurist Marinograf changes instantly. The threaded part of the watch case looks like an archaic diving suit and the actual crown looks like a head sticking out of it. From this point on, it operates just as you would expect. Thanks to the notch you can pull it out easily to set both the time date. As you can see, the teeth on the top part crown are quite worn on my Accurist, which suggests it lived quite the action-packed life before it went on to spend a number of years in a drawer. 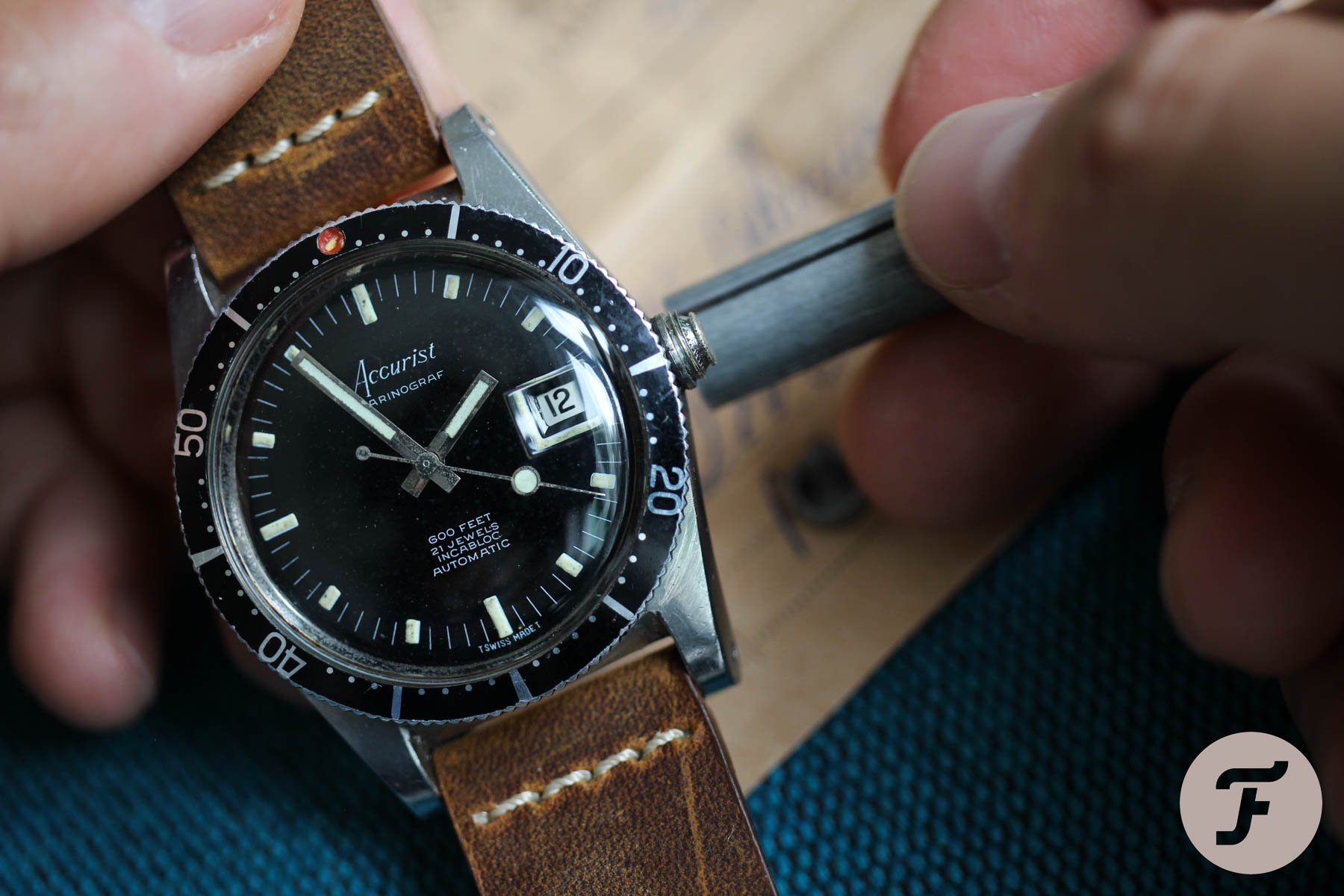 Searching for a winding key

As mentioned in the beginning, my friend Haroon didn’t have the winding tool. A tool that’s more mysterious than Colombo’s wife. Not just because you can’t buy it, you even can’t google it to see what it looks like. Haroon pointed me in the direction of a dealer, that sold me the one you see in the pictures. I don’t even know if it’s original. It doesn’t have a specific slot that would fit the teeth at the end of the crown. The original tool may be responsible for this lack of teeth. If you try hard enough, you can wind the crown with your fingers. But it seems that ends of the teeth were literally shorn off by the winder, which is nothing other than a cut tube providing better grip.

If it weren‘t for the Parmentier crown, Accurist Marinograf would hardly make it into one of these #TBT articles. Marinograf is a nice-sounding name for a watch. I dare to say it almost builds high expectations. But some might conclude that, other than the nice logo and big lollipop hand, the Marinograf is a pretty boring dive watch. Well-trained eyes instantly pick up on the 600ft depth rating and the date window. What’s so special about it? Take a better look under the nicely integrated magnifier and see the glowing tritium framing that matches the indexes. A small detail that adds a ton of charm. 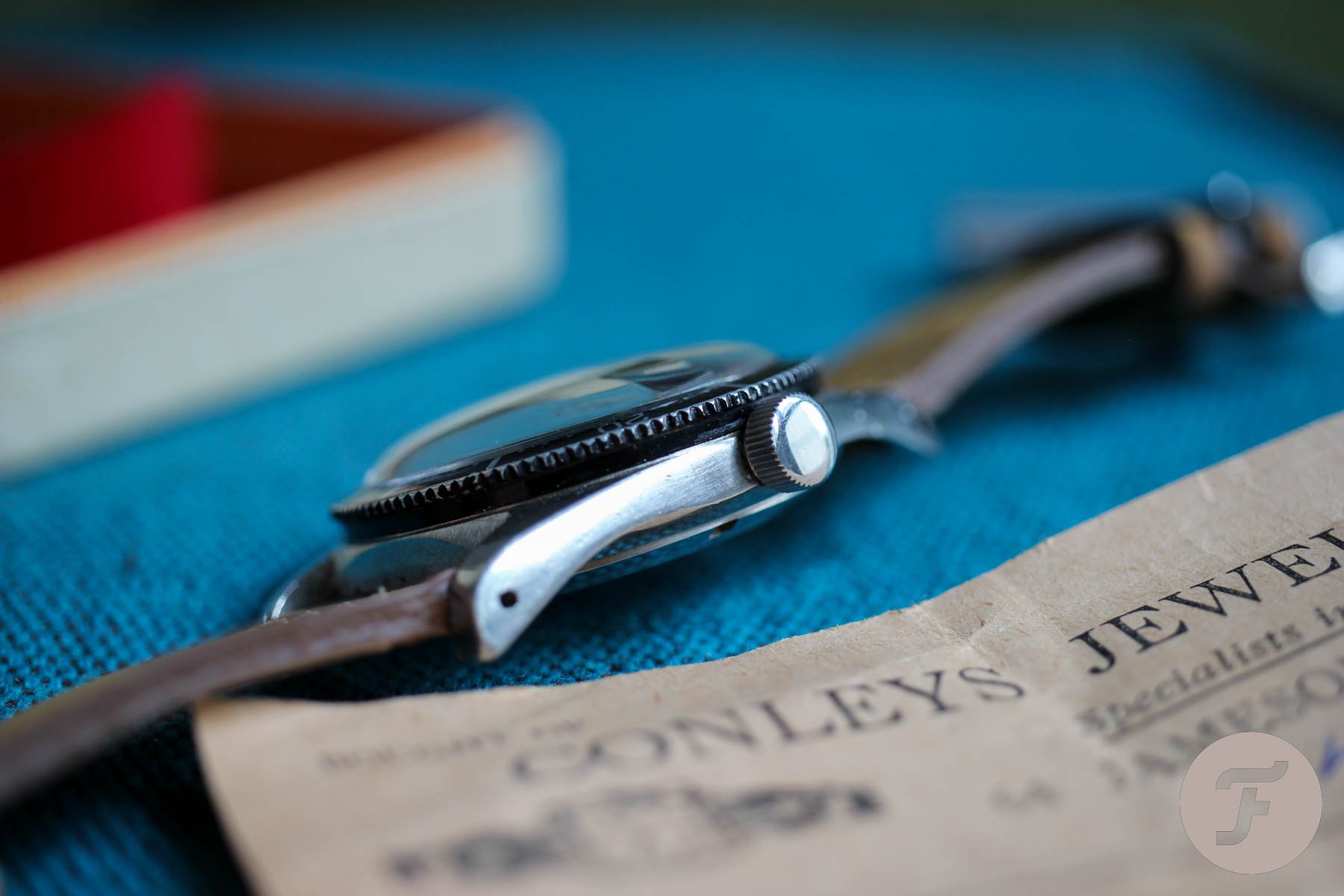 No special branding or engravings can be found on the case back. An extra step just behind the slots for the watch opener adds a bit of detail to the construction. I don’t know if it comes as a result of the case back style, but it makes you notice how sturdy and durable the watch is. There was also a version with a bigger Parmentier crown with a toothed slot and there was also a countdown bezel as an option. There are not many Parmentier watches, we know of maybe a handful. 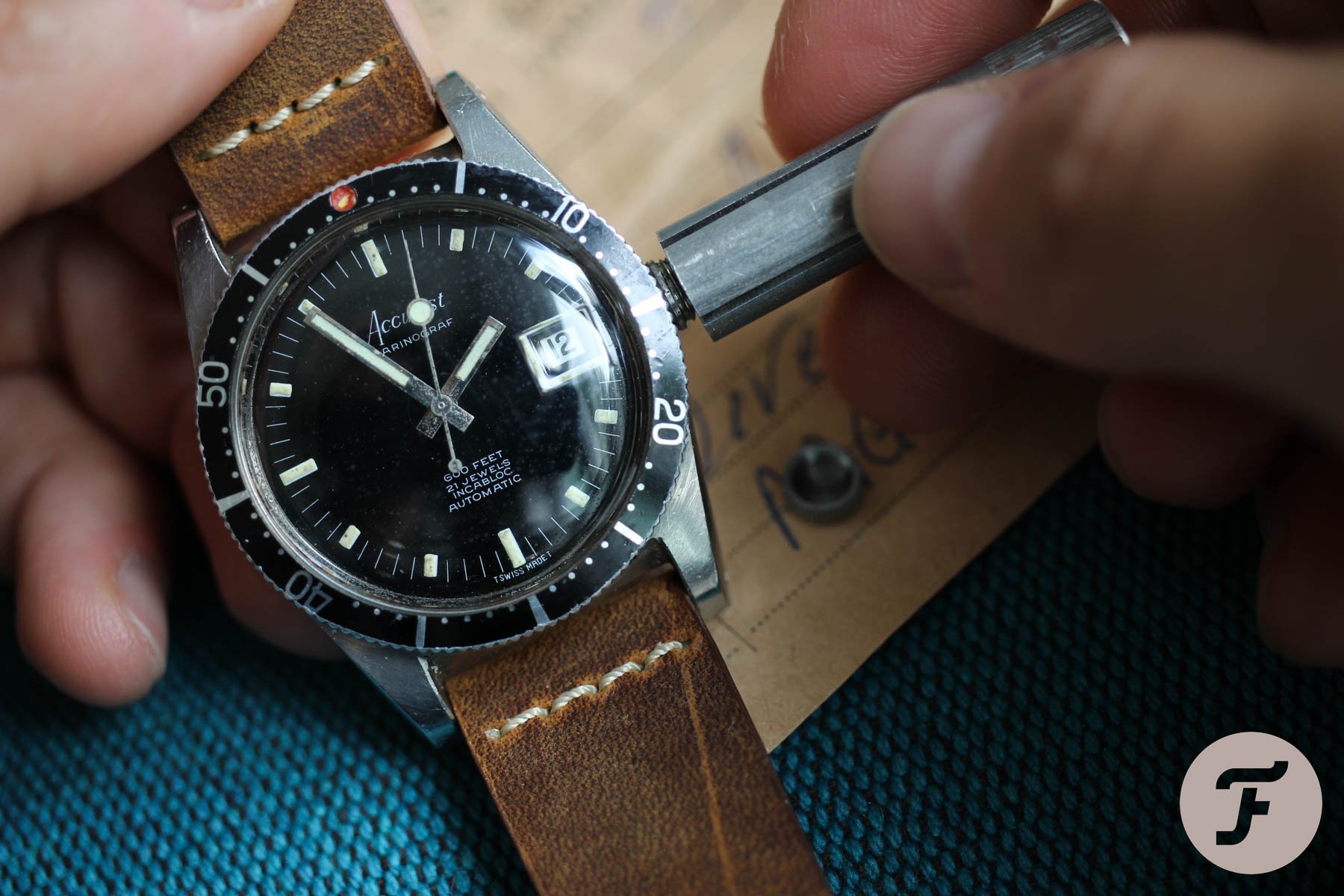 The Accurist Marinograf with its Parmentier crown is a modest and undoubtedly interesting watch. Uncapping and capping the crown before and after winding the watch is quite a refreshing and welcome morning exercise that can get throw you off your daily stereotypes. If you are patient, just save a search for “old diver” on your favorite auction site. I am aware you will get bombarded by hundreds of new listings, but it may just pay off. When I discussed the Accurist Marinograf with Haroon, he told me that this was exactly the way how he found his. Hidden away in a vaguely titled eBay listing. And that pleasing feeling when you land a €2,000 watch for just a few hundred euros is absolutely priceless. Happy hunting!

Hot Topics
Introducing: The Omega Speedmaster Super Racing With Spirate System
165 comments
Design Vs. Specs — Which Is More Important To You When Buying A Watch?
86 comments
My Predictions For New Omega Speedmasters In 2023
54 comments
The Time To Buy Is Now: How The Current Economic Climate Influences Watch Buying And How You Should React
51 comments
A Regret-Free Guide To Buying Your First Luxury Watch — Part Three: Higher-End Options From Omega, Rolex, Grand Seiko, And More
48 comments
Popular
Oris Classic Date Or Save Up For an Omega De Ville Prestige?
Robert-Jan Broer
17
An Overview: The Tissot Chemin des Tourelles Watches
Fratello
Hands-on: Tudor Black Bay 36 – Like a Comfy Pair of Jeans
Michael Stockton
13