The SIHH 2017 is over and we’re left with mixed feelings. If all SIHH brands knew how to make us smile like A. Lange & Söhne seems to be able to do every year, there wouldn’t be any issues. This year, A. Lange & Söhne showed their 1815 Annual Calendar watch, and it immediately became the talk of the exhibition.

It was a bit of an awkward moment, when A. Lange & Söhne gave their presentation on all the new timepieces they have for us (and you) in store. Just a few moments before, we received the message that Walter Lange (92) passed away the day before. He spent his entire life dedicated to watches and was the man who helped building up A. Lange & Söhne after Germany was reunited again in 1990. Until the end, Walter Lange was involved in the company and well-being of A. Lange & Söhne.

Nevertheless, in the spirit of Walter Lange, the new A. Lange & Söhne watches were presented with much pride by Anthony de Haas (director of product development). Among them, the A. Lange & Söhne 1815 Annual Calendar. A timepiece that caught the attention of many journalist and collectors during the fair. It became the favorite SIHH 2017 release of many of the attendees of the exhibition. Let’s have a closer look. 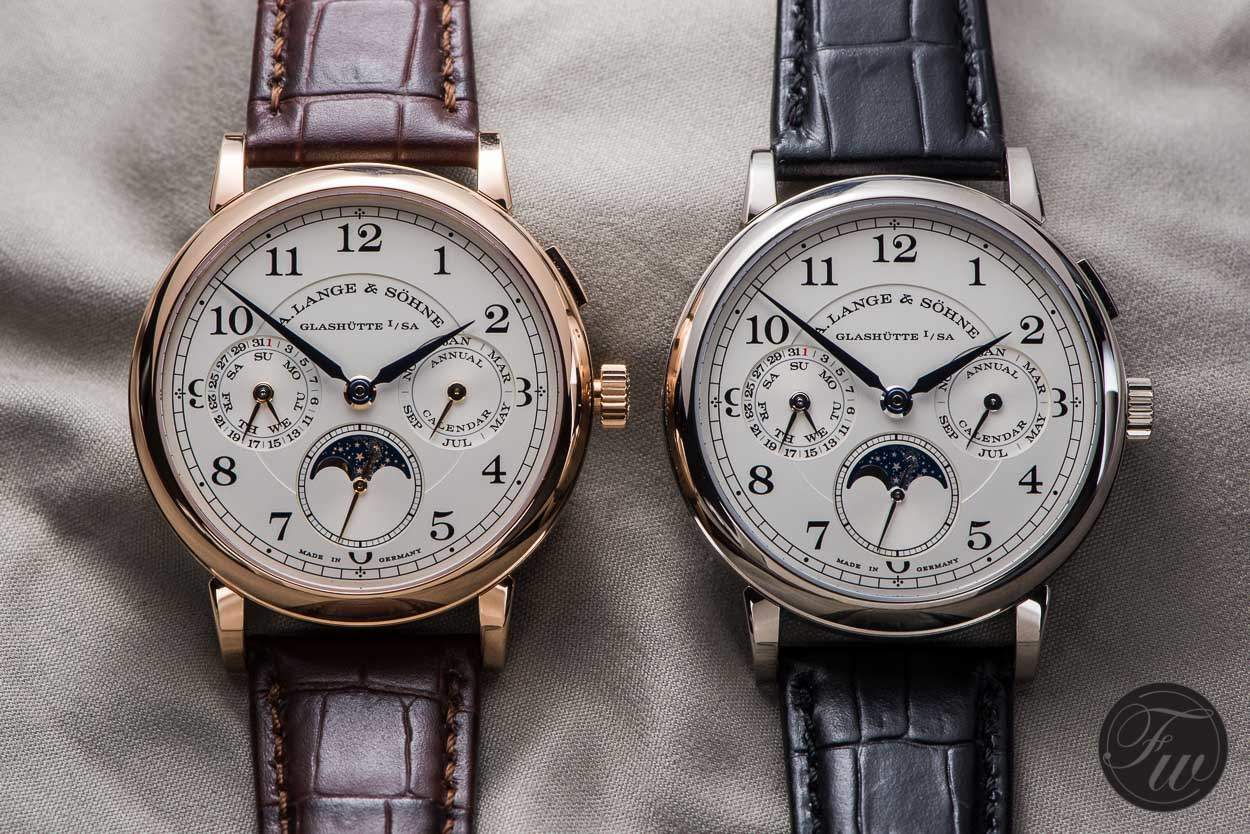 The 1815 collection refers to the birth year of founder Ferdinand A. Lange. With this collection, A. Lange & Söhne grabs back to the design elements of the high-end pocket watches that Ferdinand A. Lange was famous for. This means that you will find the use of Arabic numerals, a railway-track minute scale and of course the three-quarter plate that was devised by Lange.

The 1815 Annual Calendar is no different, but adds the day, date, month and moon phases indication to the functionality of the timepiece. An annual calendar, a very useful instrument that will only need one correction per year (on the 1st of March) to coop with the shortest month of the year. A perpetual calendar, even more complex, will even tackle the issue of February being a month with a variable number of days.

Inside the 1815 Annual Calendar is a hand-wound movement, calibre L051.3. Interesting fact is that Ferdinand A. Lange obtained actually a US patent in 1866 for his development of winding a movement and correcting time via a crown instead of the then common key-operated winding works. Available in both rose and white gold, the watch looks absolutely stunning in both variations. 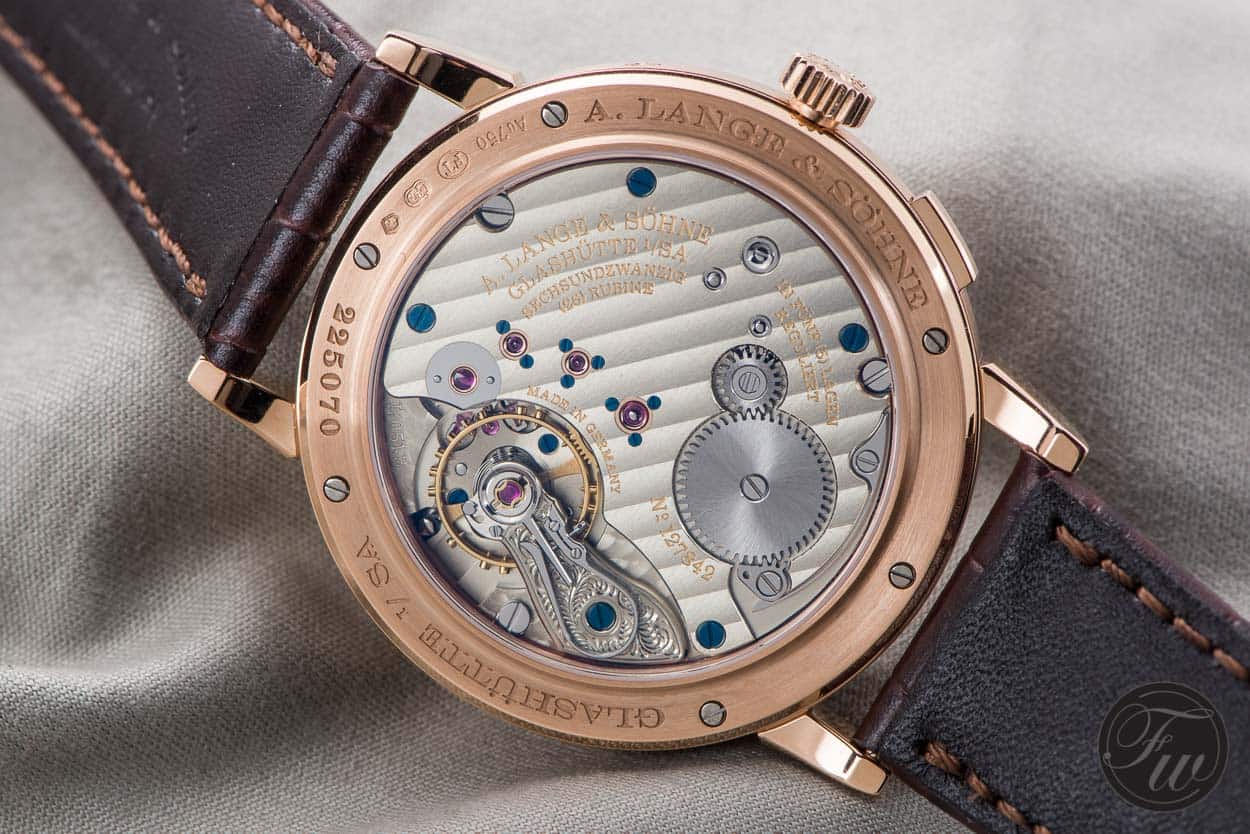 A closer look at the beautiful silver dial of the A. Lange & Söhne 1815 Annual Calendar tells us that a lot of the 1815 elements have been respected. Arabic numerals within the railway-track minute scale and beautiful finished hands that indicate, time, day, date and month. The watch has three sub dials, that indicate a number of calendar functions. At 9 o’clock, you will find the indication of the day and the date. The first day of the month is indicated in red, where as the other numerals are in black. Two polished gold hands are used for this indication. At 3 o’clock, the 1815 Annual Calendar shows the month. Each odd month is written on the dial, the even months are indicated with a short stick marker. The last sub dial, at 6 o’clock has a double role. Not only does it indicate the running seconds with a beautiful gold polished long hand (note the railway-track seconds scale), it also shows the moon phases on a beautiful blue disc with a gold moon and stars. 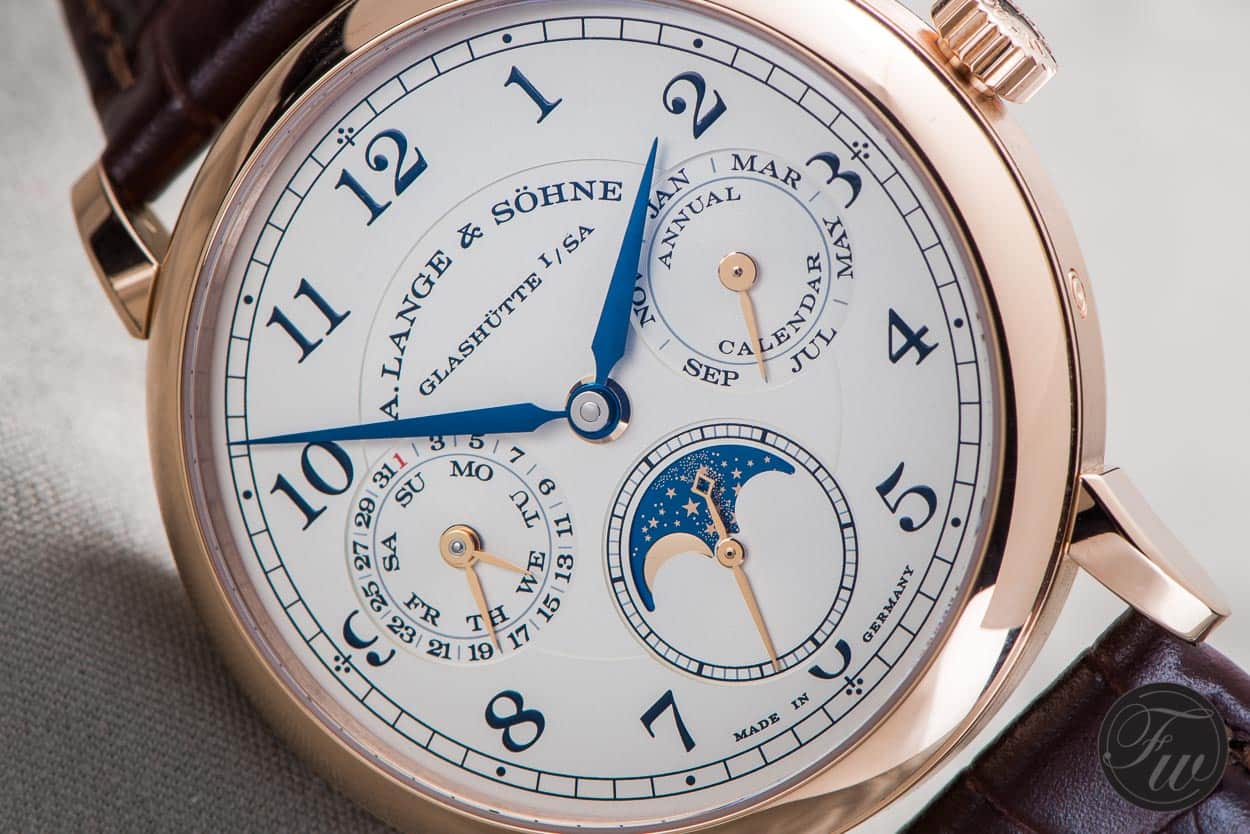 The white gold A. Lange & Söhne 1815 Calendar is no different than the pink gold as pictured above. However, the small hands are white gold instead of pink gold. Of course, the moon phases disc also has a moon and collection of stars in white gold. The solid silver dial is equal for both version of the 1815 Annual Calendar. 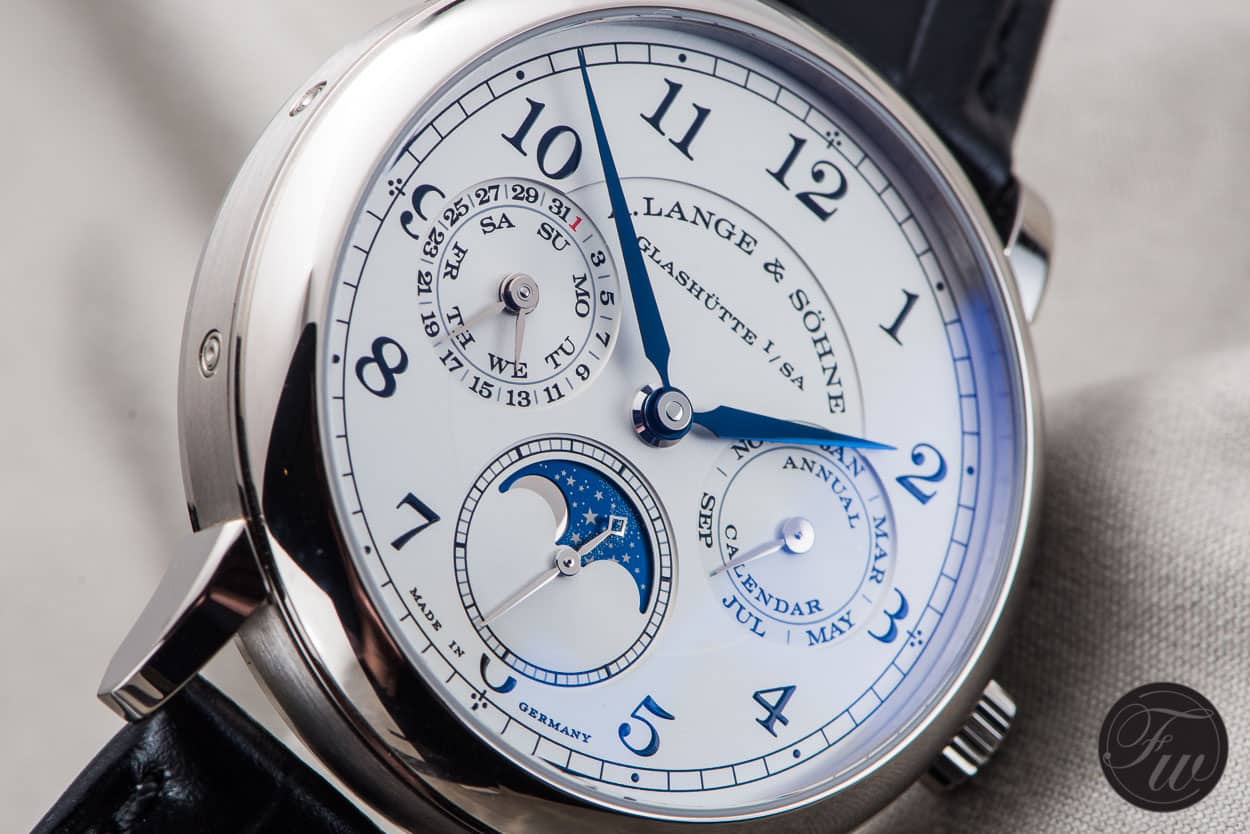 As written above, in this beautiful 40mm annual calendar you will find a hand-wound movement with 3/4 plate. As always, the balance cock has been hand-engraved by the fine craftsmen at A. Lange & Söhne in Glashütte. The movement is assembled and decorated by hand. The untreated German silver plates give a wonderful contrast with the gold case and has been engraved with gold letters. The movement is a feast for the eyes, not only the hand engraved balance cock but also the use of gold chatons, blued screws and beautiful beveled angles everywhere. The calibre L051.3 movement consist of 345 parts and has a power reserve of 72 hours when fully wound. 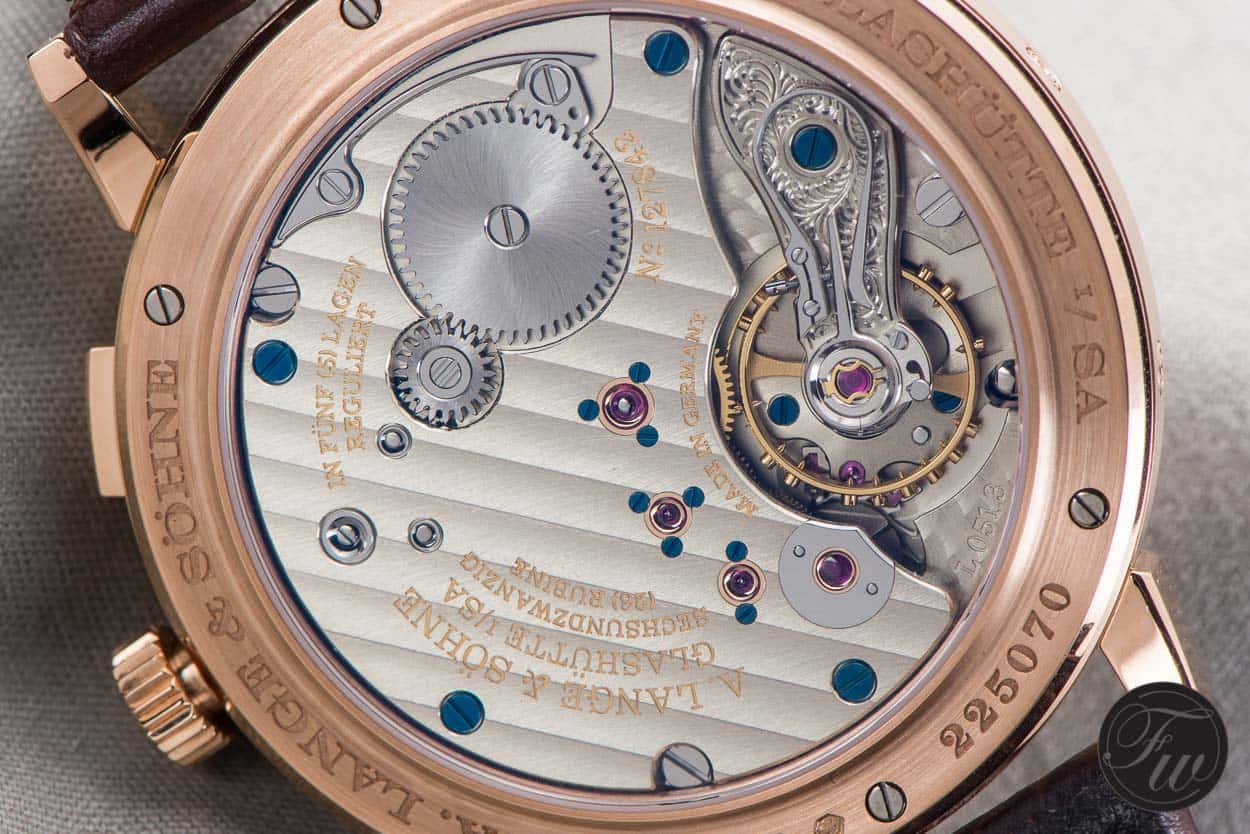 The operation of the watch is done via the winding crown for the time functions and the pushers and four additional push pieces for correcting the calendar. The large pusher at two o’clock is used to quickly advance the calendar (all functions). The other four small pushers are used to separately advance the day, date, month and moon phase. Once everything is set correctly, you can use the pusher at two o’clock to advance when it is 1st of March for example. 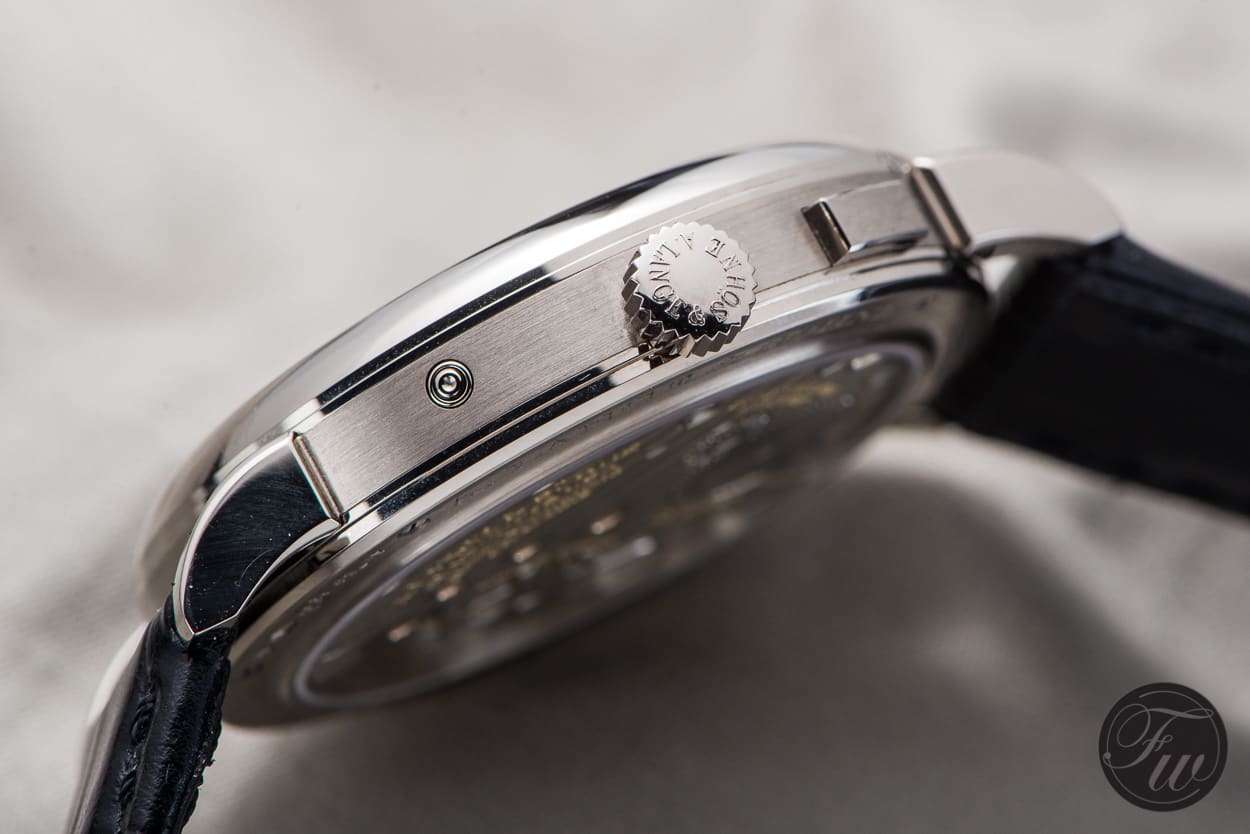 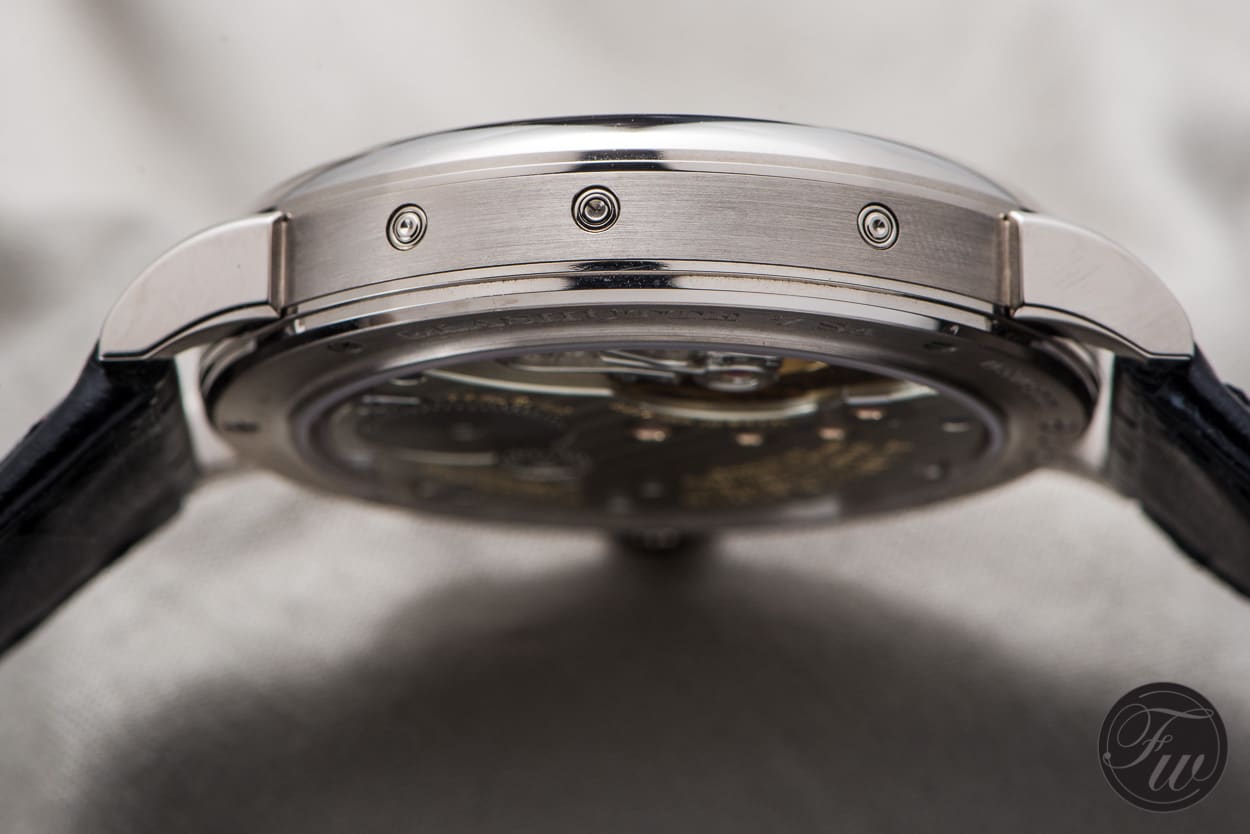 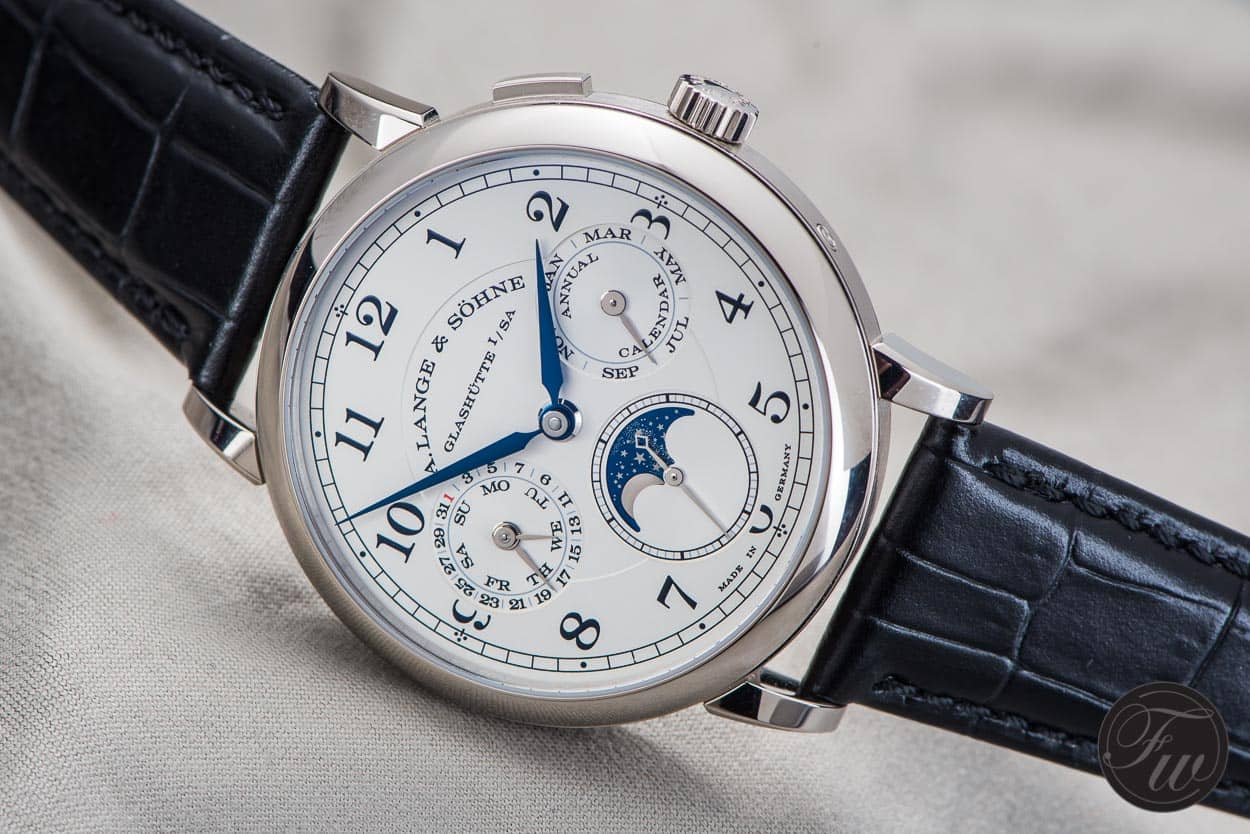 There used to be little doubt in my mind that if I had around 35.000 Euro to spend on a watch, it would go directly into the funds of a A. Lange & Söhne Lange 1 (but no worries, that time is still far away from now). This 1815 Annual Calendar makes me a bit indecisive regarding spending that amount on a high-end timepiece. Fact is, that from all the modern watches in this price category, I would spend it on an A. Lange & Söhne without much hesitation. They, again, showed how things are (or should be) done in this segment. Beautiful gold piece, stunning finish on dial, hands, case and movement. A perpetual calendar would be a next-level complication, but I don’t see the practical disadvantage of having an annual calendar to be honest. I think it is even fun to play with that two o’clock pusher at least once per year. Then again, would I go for the iconic A. Lange & Söhne Lange 1 timepiece without this annual calendar complication or for this 1815 Annual Calendar watch with stunning moon phases indicator (I am a sucker for those). Based on looks alone, I might decide for the latter.

Hot Topics
Introducing: The New Seamaster Professional 300M 60 Years Of Bond — With A Special Animated Case Back
100 comments
It’s Time To Invest In A Dress Watch — Our Picks From Breguet, Omega, Grand Seiko, And More
67 comments
Are You Still After An Omega × Swatch MoonSwatch?
65 comments
Sunday Morning Showdown: The Tudor Pelagos Provocation — Pelagos Vs. Pelagos 39
55 comments
The Rolex Waitlist Conundrum — How Much Will The Price Of Your Watch Increase While You Wait?
48 comments
Popular
Top 10 Rolex Watches – Overview of Models Favoured By Our Readers
Fratello
24
The Ultimate Sports Rolex – The Explorer II Reference 1655
Robert-Jan Broer
17
You Asked Us: Tissot Powermatic 80 Seastar 1000 or Longines HydroConquest
Robert-Jan Broer
19