2017 sees ANONIMO celebrate its 20th birthday. The last two decades have been full of innovation, change and diversity, with new products being inspired by new talent and new locations. Birthdays always inspire reflection, so this is a look back at the ANONIMO which has been, and a look forward at the ANONIMO yet to come.

In 1997, an era when the digital watch was king, Federico Massacesi sought to launch a business which would leverage, pay homage to, and develop the watchmaking traditions of Florence, Italy. The watches would be entirely mechanical and they would be beautiful; the ultimate tribute to the union of form and function which had made Florence such an icon of the early watchmaking scene.

As one of Italy’s oldest and most respected watchmaking companies, Panerai, relocated to Switzerland, was leaving behind many of its most experienced craftspeople, at around the time that Massacesi was formulating his business plan as luck would have it. Through Massacesi’s vision and the ex-Panerai team’s experience, ANONIMO was born. 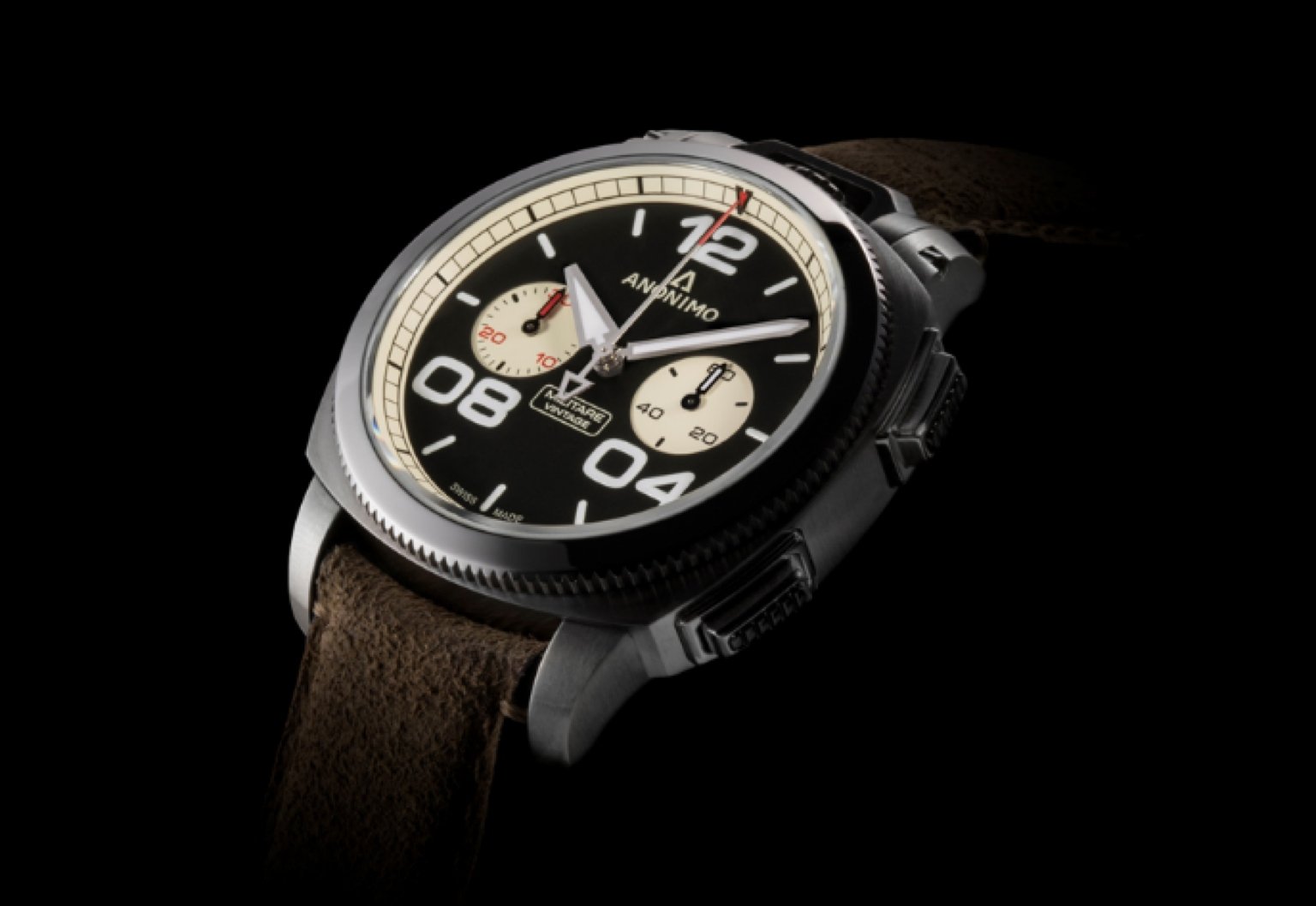 One year after the brand was founded, it showcased its first collector’s piece; the Millemetri, at Italy’s premier jewellery exhibition, Vicenzaoro. Crafted with a fully automatic movement, the deceptively simple design was designed to military standards and waterproof to 1,000m. It would set the standard for all ANONIMO timepieces to come.

As ANONIMO discovered which of its features most ignited the interest of aficionados, and professional divers, more and more focus was put towards the militaristic aspects of their timepieces. the ultimate martial piece – the Militare – was released in 2001, sealing ANONIMO’s place among the watchmaking elite.

A patented crown locking system ensures the watch’s functionality in all environments; the 6 ‘o clock crown is secured by the mechanical pressure of the strap once it has been adjusted to the wearer’s wrist, preventing it from being opened inadvertently, while giving great freedom of movement to the wearer.

Following a collaboration with Colonel Dr. Dino Zei, Italian ex-navy officer and former CEO of Panerai, the Militare and its successors – the Nautilo and Polluce – soon became favourites with both the military and the diving fraternity. The watches were both beautiful and robust. Some models could withstand water pressure down to 2,100m, as demonstrated by the CNS (Cooperative Nazionale Sommazzatori) in their oceanographic geophysics research GEOSTAR project off the Sicilian coast.

While horologists will know the story of the hunters who created the Gefica Safari in the 1980s, the beauty of bronze was slow to catch the attention of the public. Released in 2006, the first ANONIMO bronze diving watch played upon the true changeability of the alloy. Far from repenting bronze’s tendency to tarnish and record the progress of its travels in its patination, ANONIMO realised the potential of bronze to tell its wearer’s story. But not only does the material look astonishing, but as seafarers through the ages will attest, it holds astonishing properties; yes, it tarnishes, but it never degrades, even when exposed to salty water, making it ideal for products used at sea – including diving watches.

While other manufacturers held back, unsure of the aesthetic appeal of, and consumer demand for, bronze, and hesitated over the viability of the alloy being used for jewellery – would it cause allergies when worn against the skin for prolonged periods? – ANONIMO researched, experimented, innovated and developed.

From there, every future model adhered to ANONIMO’s ethos of style with substance. Handcrafted leather straps; strong fixings; crowns created to suit each watch’s particular purpose – whether easy access for the military or carefully concealed for divers – and cases not cast, but rather painstakingly milled from solid billets of metal or alloy in a bid to secure quality over quantity; a philosophy which continues to stand the brand in good stead.

Success is often marked by the ways in which your competitors view you, and in business the greatest form of flattery is a takeover bid. In 2013 ANONIMO was taken over by European investors and moved to Switzerland. While some thought that this would spell the end of what had been a beautiful independent success story, the brand simply did what had made it a triumph in the first place; it listened to what people wanted and it evolved and it innovated.

Still independent, ANONIMO SA moved on to create a series of watches which would change with you. There were still several bronze watches within the ANONIMO collection, each one a shining example of what can be achieved when craftsmanship is given free rein. 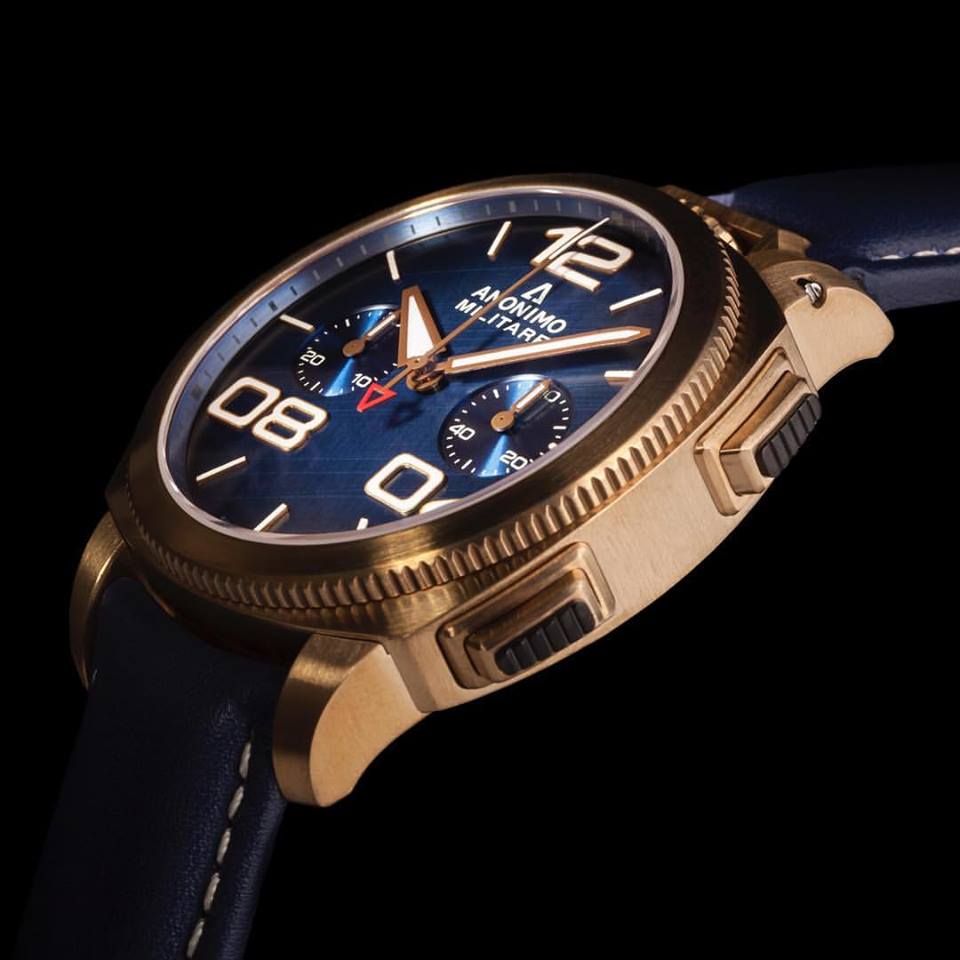 Today ANONIMO is nothing if not a success story. Its timepieces are not designed as a brand status, but rather a statement of the wearer’s personality; each watch is elegant, yet robust and created for use rather than plain adornment. Hand finished, finely detailed, yet durable; ANONIMO watches are made to last. This is what appeals to the watch-buying public.

The company now has a global presence, retailing in more than 15 countries across all continents and will likely see that coverage grow in the coming years. 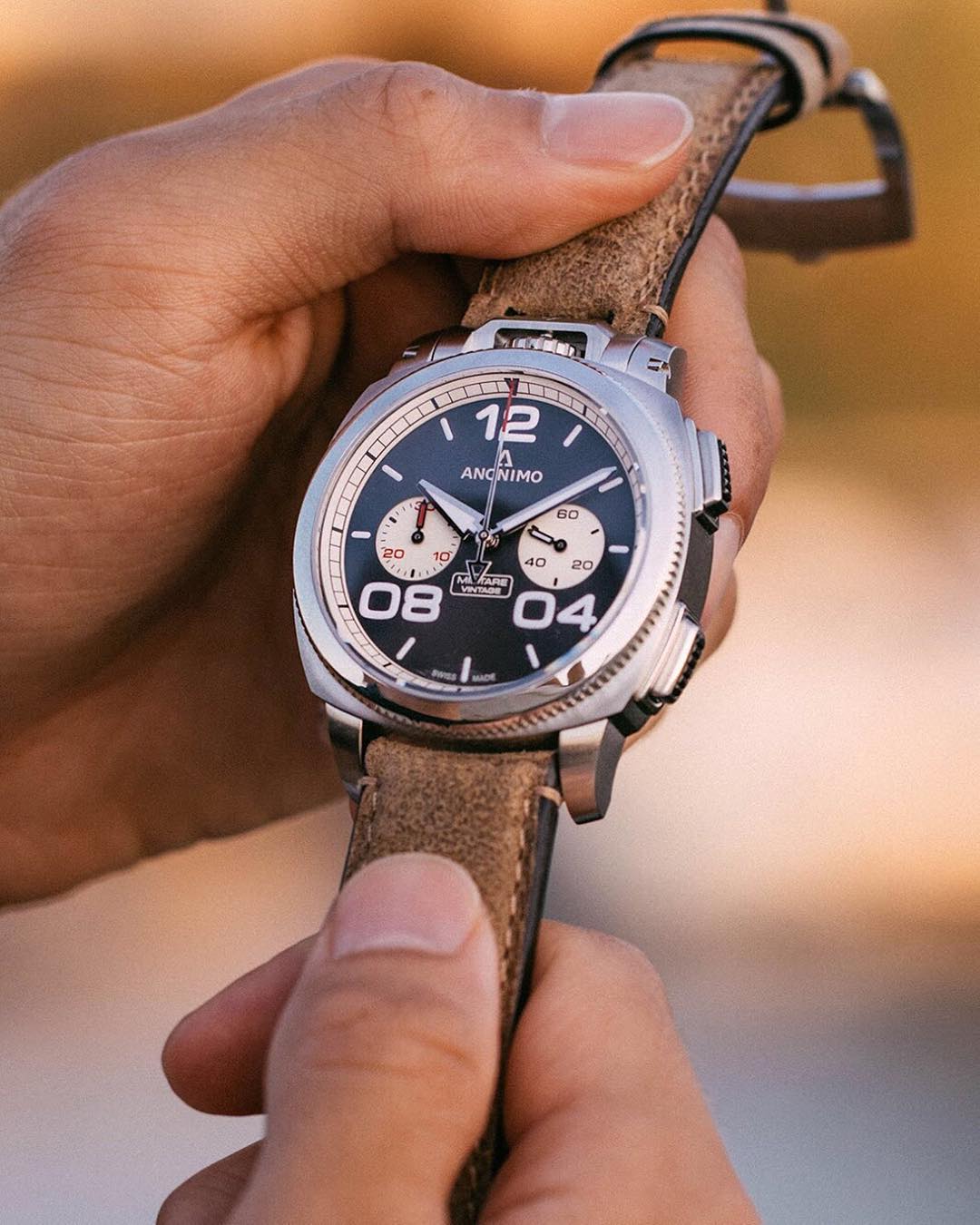 2017 marks not only the platinum (or china for the traditionalists) anniversary of ANONIMO but an usual face of the collection. Looking to the future while nodding to the past, the new MILITARE and NAUTILO lines combines the elegance of traditional Italian craftsmanship, the impeccable movements of the Swiss watchmakers, and the innovation of today’s ANONIMO designers.

As well as the beautifully bronze classically styled pieces that the brand has become synonymous with, this summer sees ANONIMO Nautilo NATO collection with a vibrant stripe of colour flowing along the textile strap, while accents of colour and stainless steel highlight key features of this diving watch.

This fall a chronograph version of its Vintage Automatic model will be presented in two versions. An elegance worthy of Italy, its country of origin and which will delight connoisseurs and collectors alike.

With a more incisive dial treatment, these new MILITARE Vintage chronographs comes either in a version commonly called “Panda”, or “Newman”. Very graphic, these Vintage models are mounted on a bracelet of aged leather, and give off a refined style, which goes straight to the point.

For greater readability, an internal railroad paces the turn of the timer. With its polished bezel and satin case, this new MILITARE reveals through a glass back its automatic movement and its engraved ANONIMO oscillating weight.

As ANONIMO looks forward to the next twenty years of watchmaking, it sees a future of innovation and adaptability, but also a future which continues to honour the tried, tested and trusted techniques of the Swiss and Italian watchmaking artisans of the past who originally inspired the brand’s creation. If it ain’t broke, don’t fix it. And ANONIMO is in its prime. 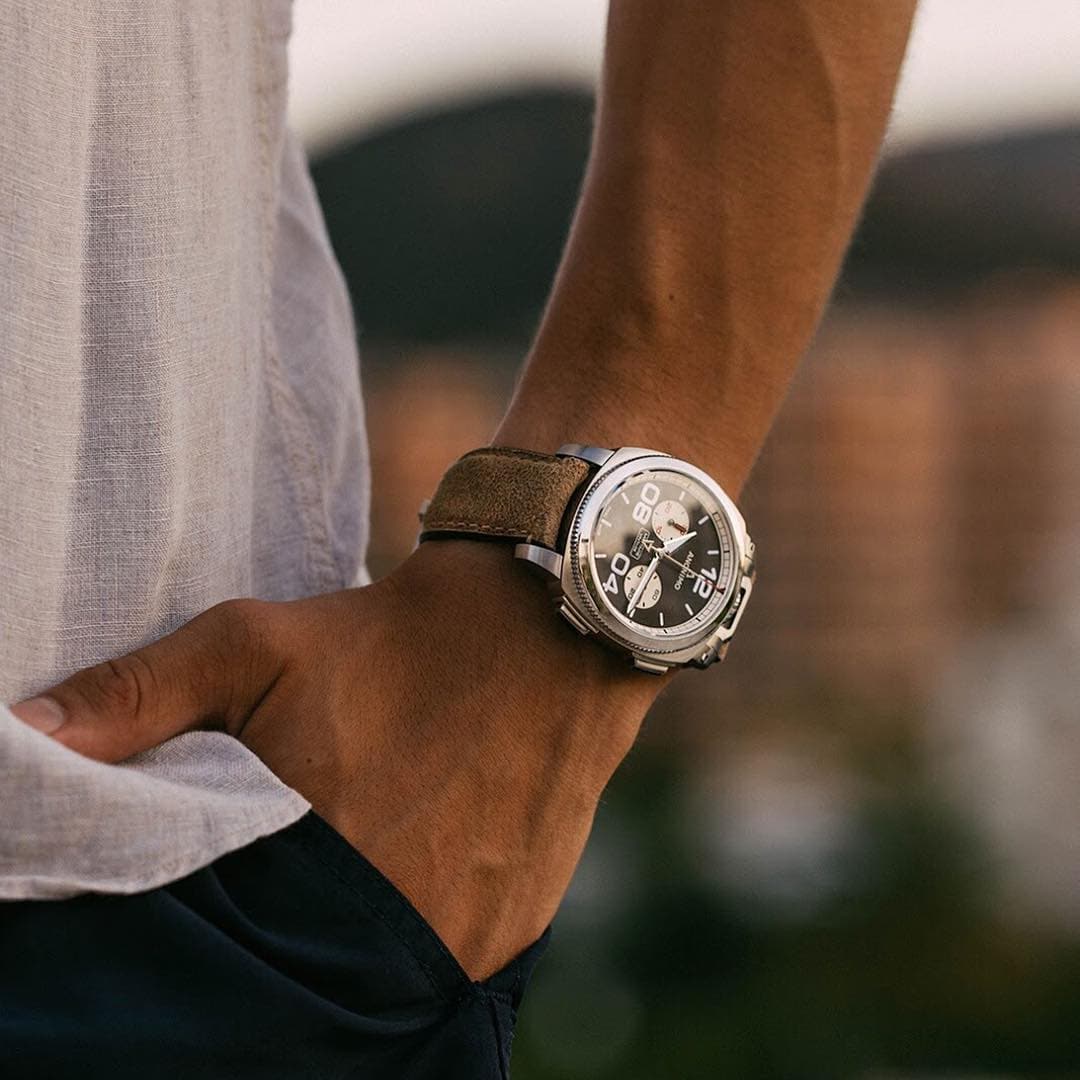 Hot Topics
A Californian Controversy: The Origins Of The Term “California Dial” And Why It Can Mean Two Very Different Things…
49 comments
What Zenith Is Doing Wrong With Its Pilot Line And How The Brand Could Fix It
32 comments
The Best Omega Watches Of Daniel Craig’s James Bond Era — Have Your Say!
27 comments
Why The Rolex GMT-Master II 16713 “Root Beer” Is Better Than The 126711CHNR “Cough Syrup”
26 comments
Here Are The Best Grand Seiko Watches Of 2021
23 comments
Popular
Rolex Submariner – Historical Overview Of A Diving Legend
Robert-Jan Broer
18
You Asked Us: Nomos Orion as a dress watch?
Gerard Nijenbrinks
2
Hands-On With The Patek Philippe Nautilus 5740/1G
Robert-Jan Broer