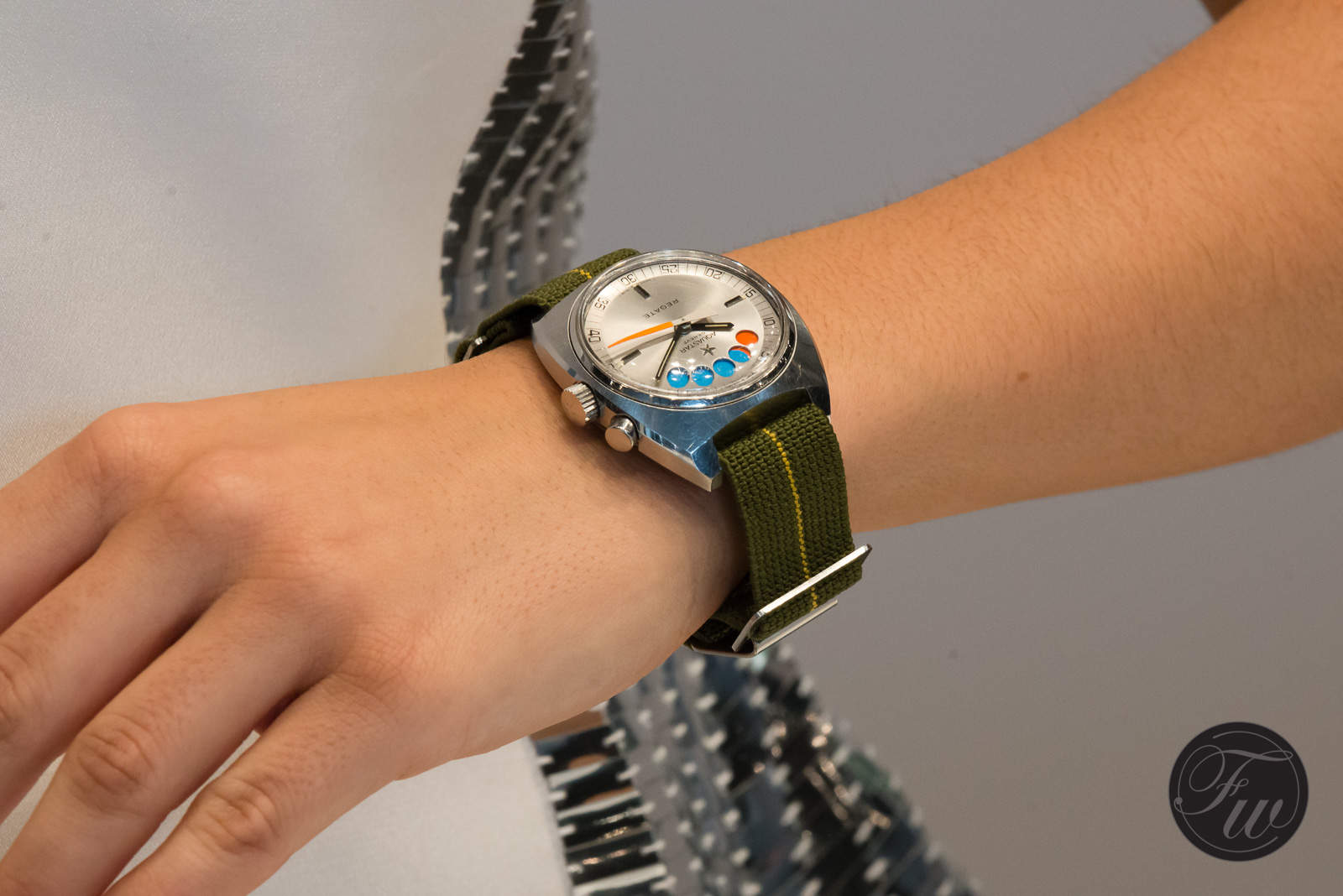 And the first question – which watch – I was happily helped with by our team member Balazs Ferenczi. He showed me a very nice regatta timer, the Aquastar Regate, and offered it me to wear for this week.

I’m a lover of classic chronographs, specially if they have or are something special in terms of function or design. The Aquastar certainly qualifies. A regatta timer is a chronograph specifically constructed for its job, to time the start of a classic sailing race.

Timing the start of a regatta

10 minutes before the start of a classic sailing race a whistle or horn will be blown, or a shot will sound. Exactly at that moment the shipper pushes the button of this single button chronograph. 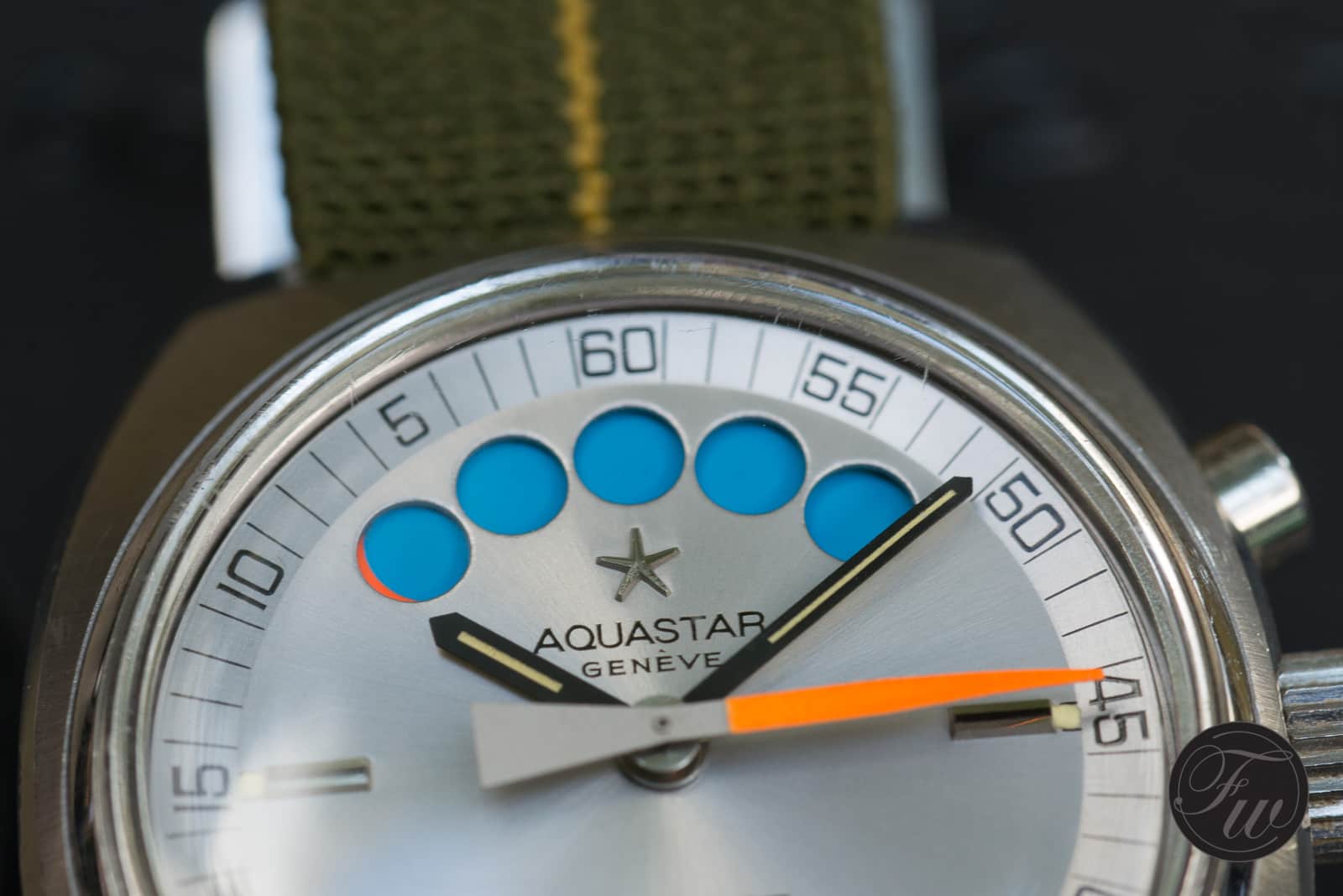 Immediately the 5 openings at the top of the dial of this watch turn blue, and the orange chronograph second hand jumps to zero and starts to run. During 5 minutes, every minute, one of the blue balls will turn orange, each indicating that a minute has passed. 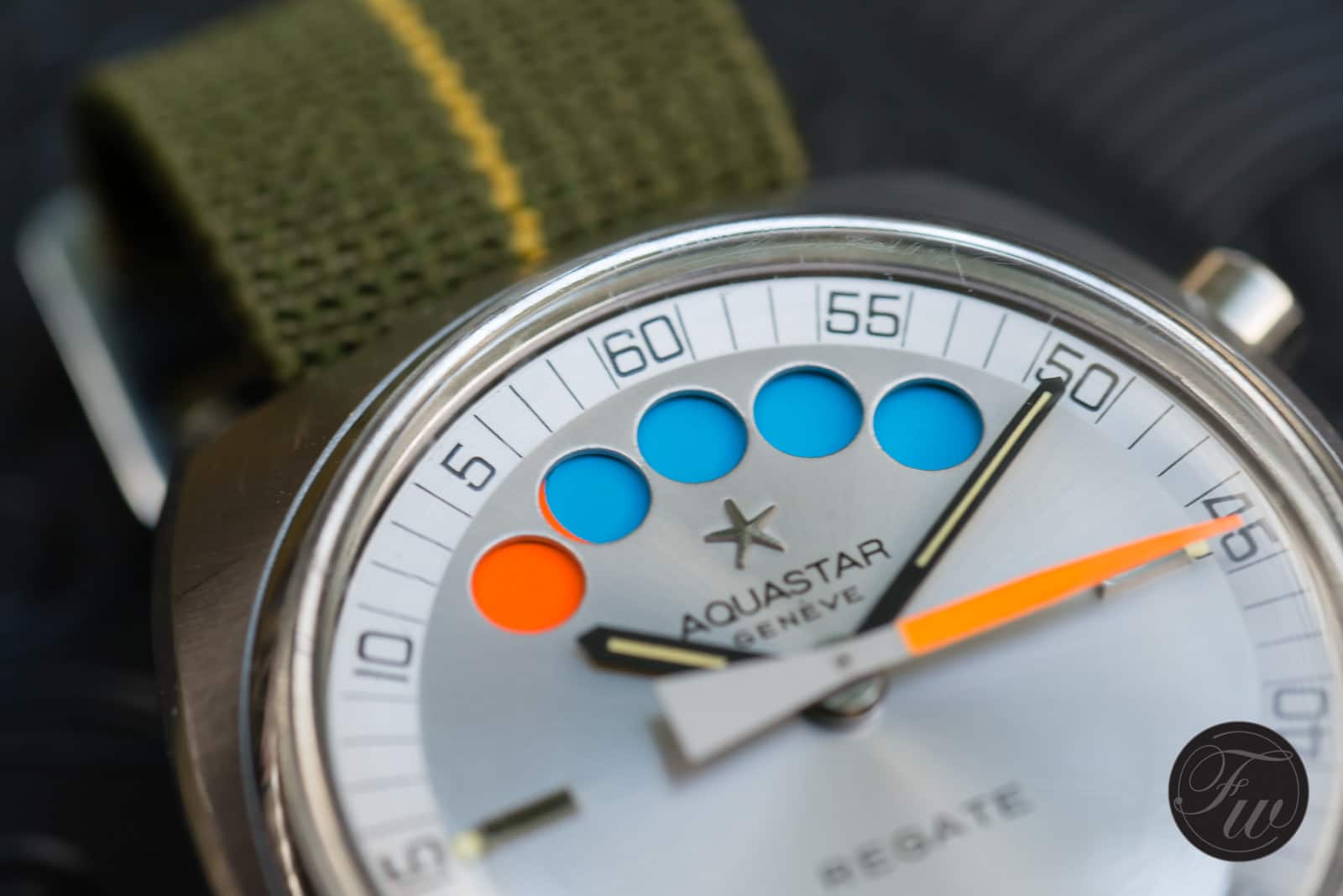 After 5 more minutes a second whistle, horn or shot will be heard. At this moment your chronograph will show all balls orange. The next thing which happens is that the balls will turn silver, equaling the color of the dial. So they more or less disappear. 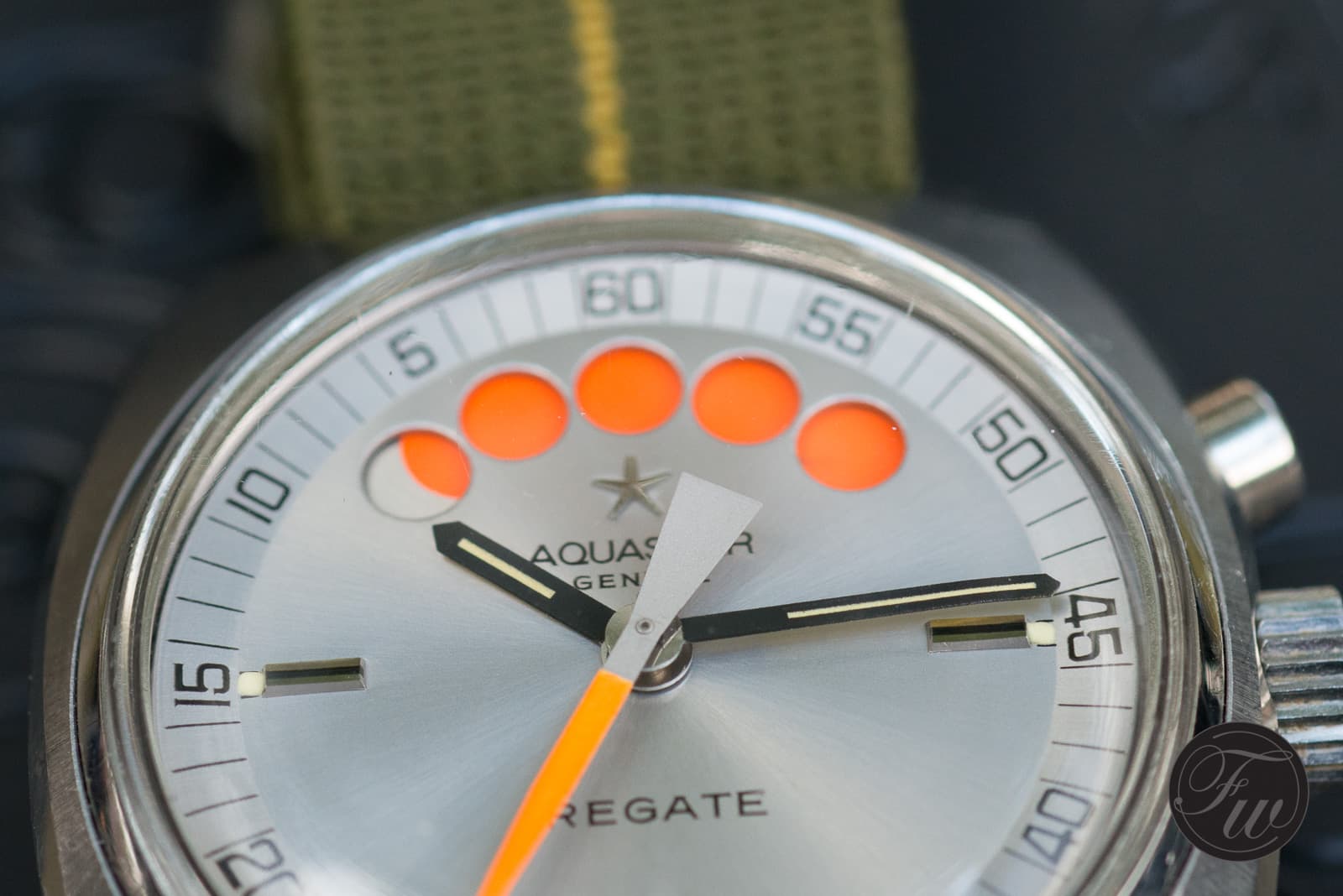 When all balls have disappeared and the orange second hand is at 60 the the third and final signal will sound indicating that the race has started. At further use of the watch without operating the chronograph button, the balls remain invisible and the watch can be used as a regular watch. The second hand will remain running, without further changing the balls. 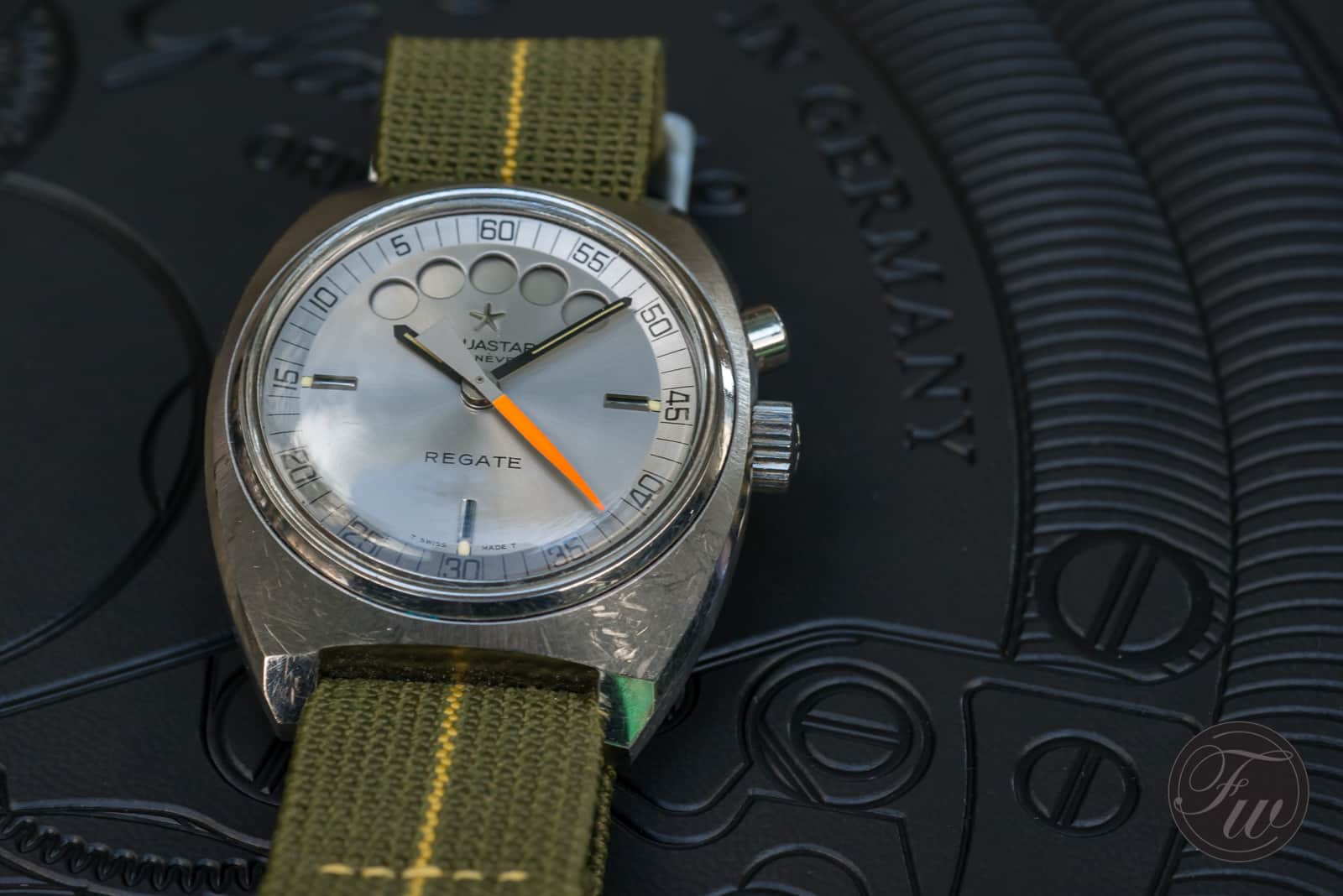 Mostly the starting line will be indicated as  a line between a starting ship and a buoy. Too early crossing of the starting line is not allowed and results in disqualification or at least an extra turn of the sailing ship to cross the line once again.

Jean Richard filed a patent concerning a watch with a 5 minute countdown function in 1961. This patent concerned in fact the regatta yachttimer watches as we still know them today. Then in the mid sixties Frédéric Robert developed the Aquastar Regate from this patent with a modified Felsa 4000N movement. 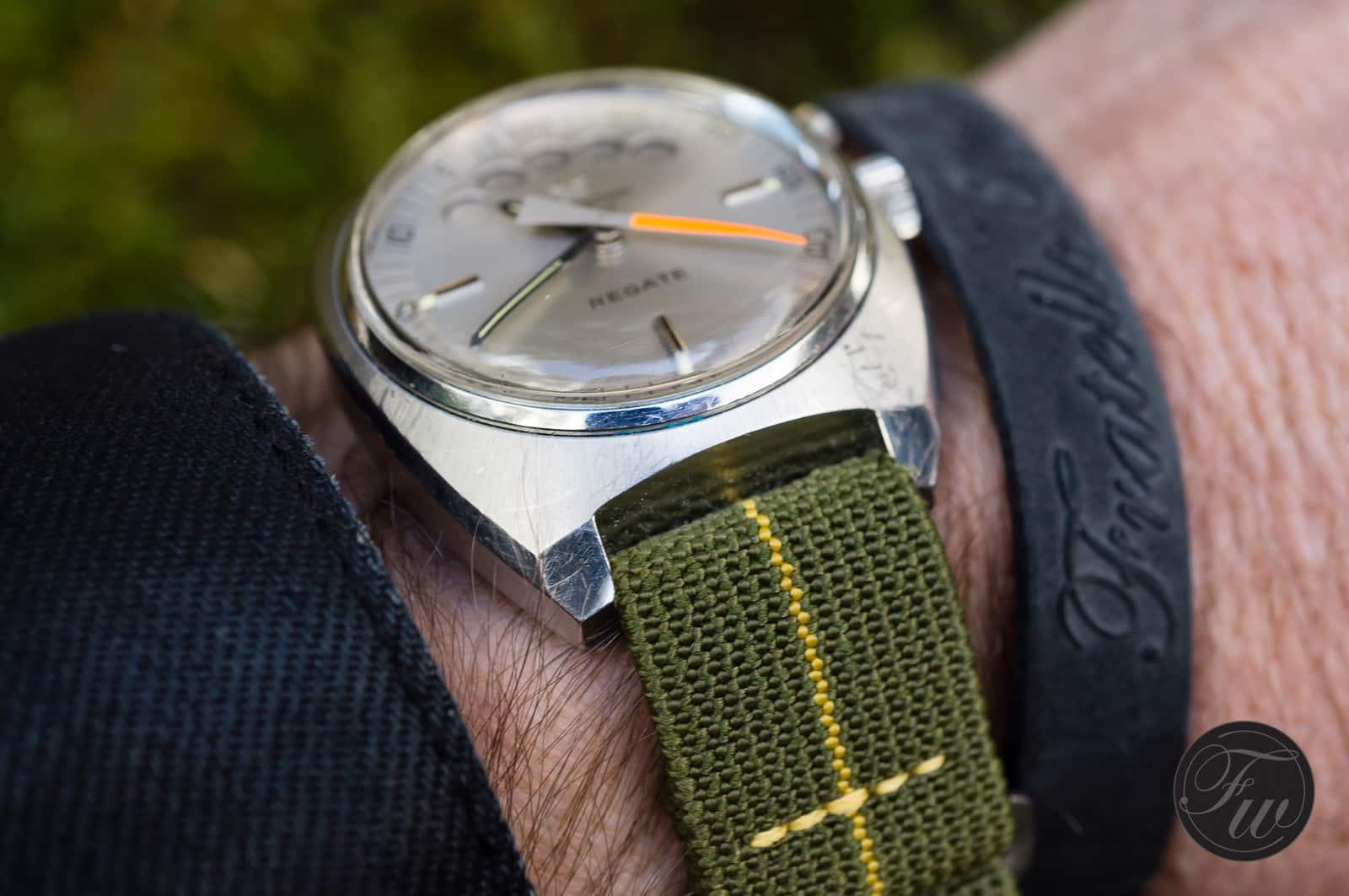 The case size of the Aquastar Regate is just under 38 mm, and it’s almost 14 mm thick. Balazs has put his watch on the very attractive MN (Marine National) strap, which he describes here: MN strap