In our beloved industry, “Swiss” is the buzzword. Swiss watches are luxury, but we all know how much of a part China plays in manufacturing watches. Not only small microbrands but also many big names employ Chinese manufacturers to produce large numbers of different parts. Is that a bad thing? No, of course not. But for some shortsighted people, it’s not worthy if it’s not Swiss. Well, that’s some successful marketing there. Thankfully, we have the likes of Atelier Wen doing its best to break down this way of thinking by celebrating the “made in China” moniker and showing what Chinese craftspeople are capable of. After its debut, the Porcelain Odyssey collection, Atelier Wen’s second collection, Perception, features beautiful hand-guilloché dials made by China’s only master guilloché craftsman.

Atelier Wen is two Frenchmen who connected over a shared appreciation for watches and Chinese culture. Robin and Wilfried met while studying. It was then that they decided to embark on a project that embraced Chinese watchmaking and truly celebrated it. For Atelier Wen’s first models, Robin and Wilfried spent a long time working with Chinese craftspeople to create the beautiful and traditional Porcelain Odyssey collection. Porcelain is notoriously challenging to work with, but their dedication to tradition paid off, with five beautiful models featuring differently colored porcelain dials now all sold out. Wanting to feed and allow their ambition to prosper, Atelier Wen decided to up the ante for its second collection by going guilloché. 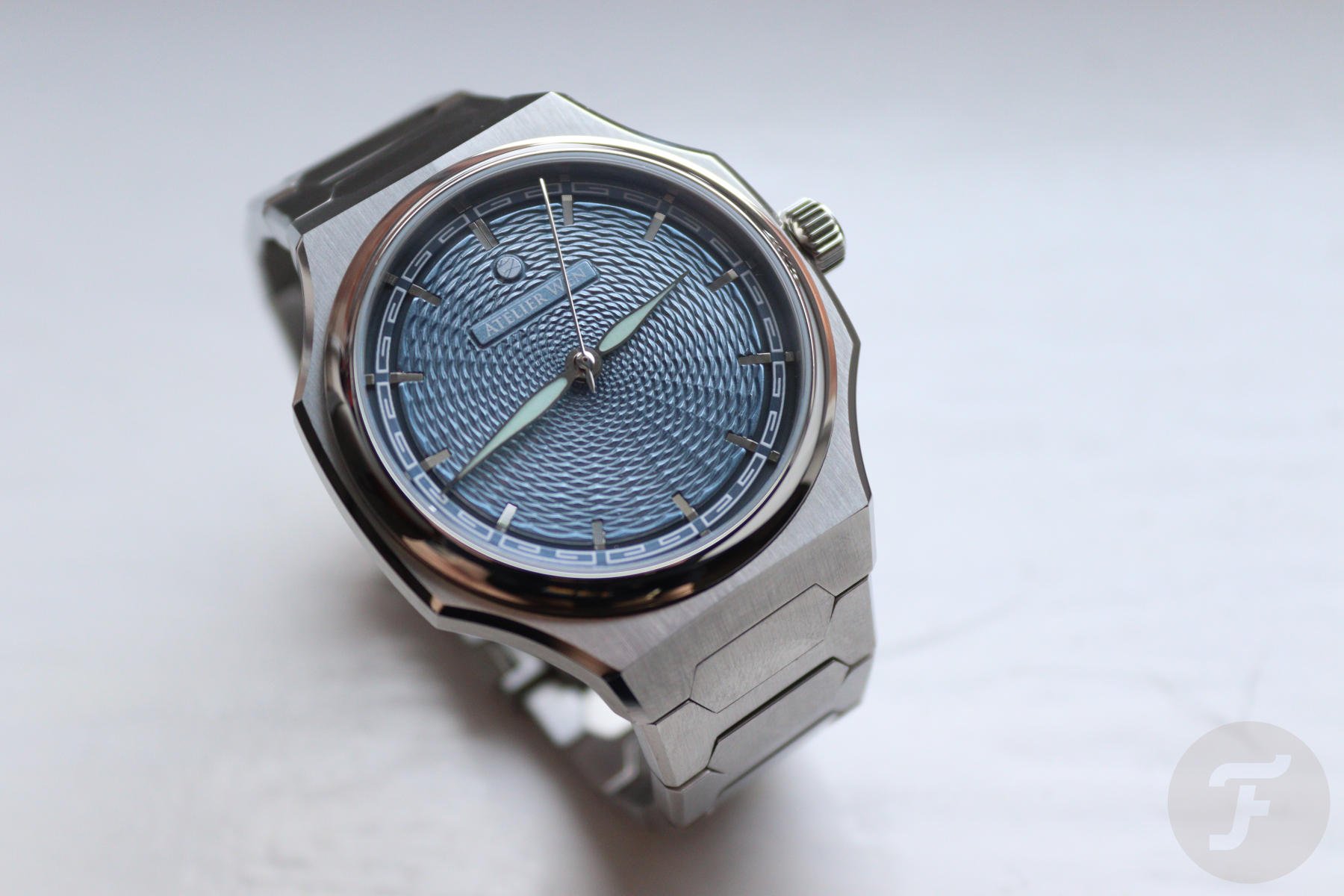 Atelier Wen’s Perception is a beautiful amalgamation of a classic steel sports watch (complete with an integrated bracelet) with traditional craft in the form of guilloché. The collection’s theme — Chinese architecture — is a little more conceptual than its predecessor, but it resonates through every aspect of the watch’s design. Now, architecture itself as a form of inspiration is nothing new per se, but this is the first time I’ve seen Chinese architecture as the base of design codes in a watch. 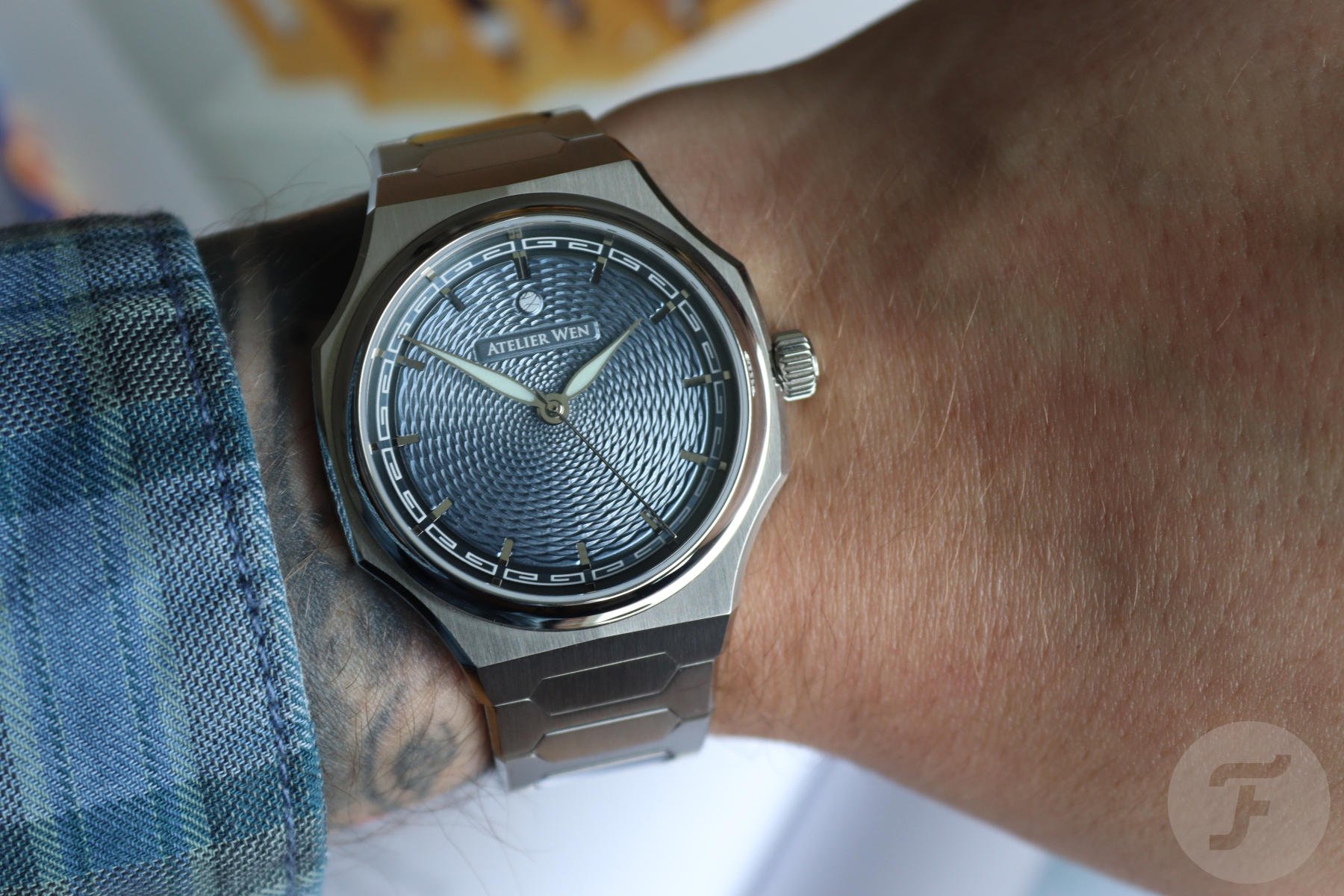 Chinese pagodas offer a unique pool of inspiration for shapes due to their iconic hexagonal form. The use of the hexagon is no coincidence either. The number six (六), pronounced “Liu”, is considered lucky, as it sounds like the word that means “to flow” and can indicate smooth progress in life. It also means “well-off”. The focal point of the Perception collection is the beautiful guilloché dial, so it only seems fair to start there. And to do that, we must start with the man who creates these beautiful dials, Master Cheng. Dedication is the epitome of Master Cheng’s journey to becoming a master guilloché craftsman. It is a bold decision to give up everything to embark on a journey into learning a rare métier d’art. It takes enormous effort and hardship to master such a skill. This journey was even riskier for Master Cheng because there was nobody to teach him. Furthermore, there was no equipment. Nobody commercially makes rose engines anymore, and antique ones hardly ever come up for sale — even less so in China! Many lesser individuals would give up with no tutor and no equipment, but Master Cheng took this in his stride and decided to build his own rose engines. 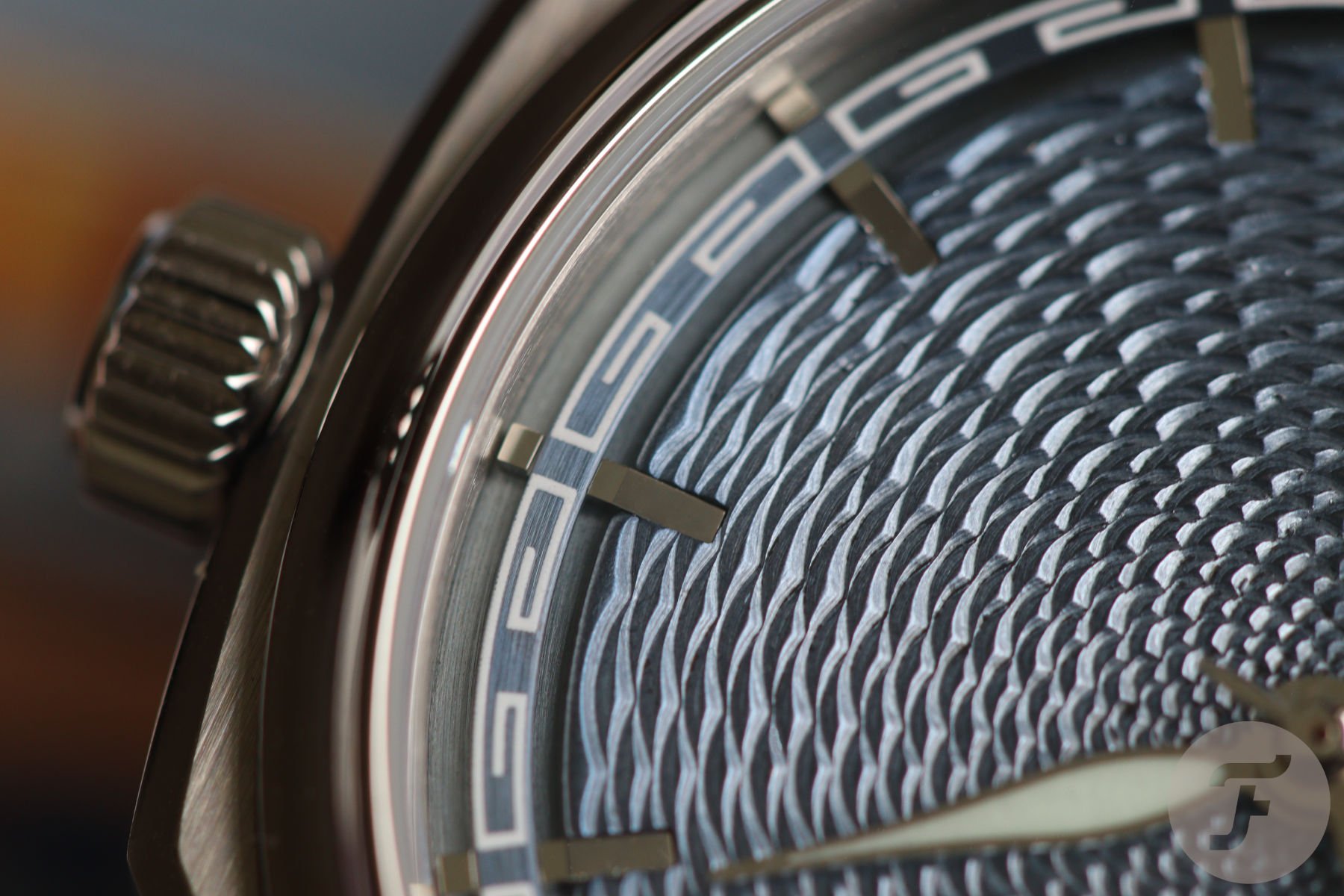 Having never seen a rose engine and with little to no literature available to instruct him on how to design and construct one, the task was as challenging as you can imagine. After a couple of years of working seven days a week, and after several failed machines and plowing through most of his life savings, Master Cheng finally completed his first working machine, making around 90% of the components for his proprietary design by hand. But he didn’t stop there. He kept on building new machines, continuously improving his craft. By 2021, he had completed his fourth working machine. These four machines enable him to engrave more than 1,000 different, intricate guilloché patterns. 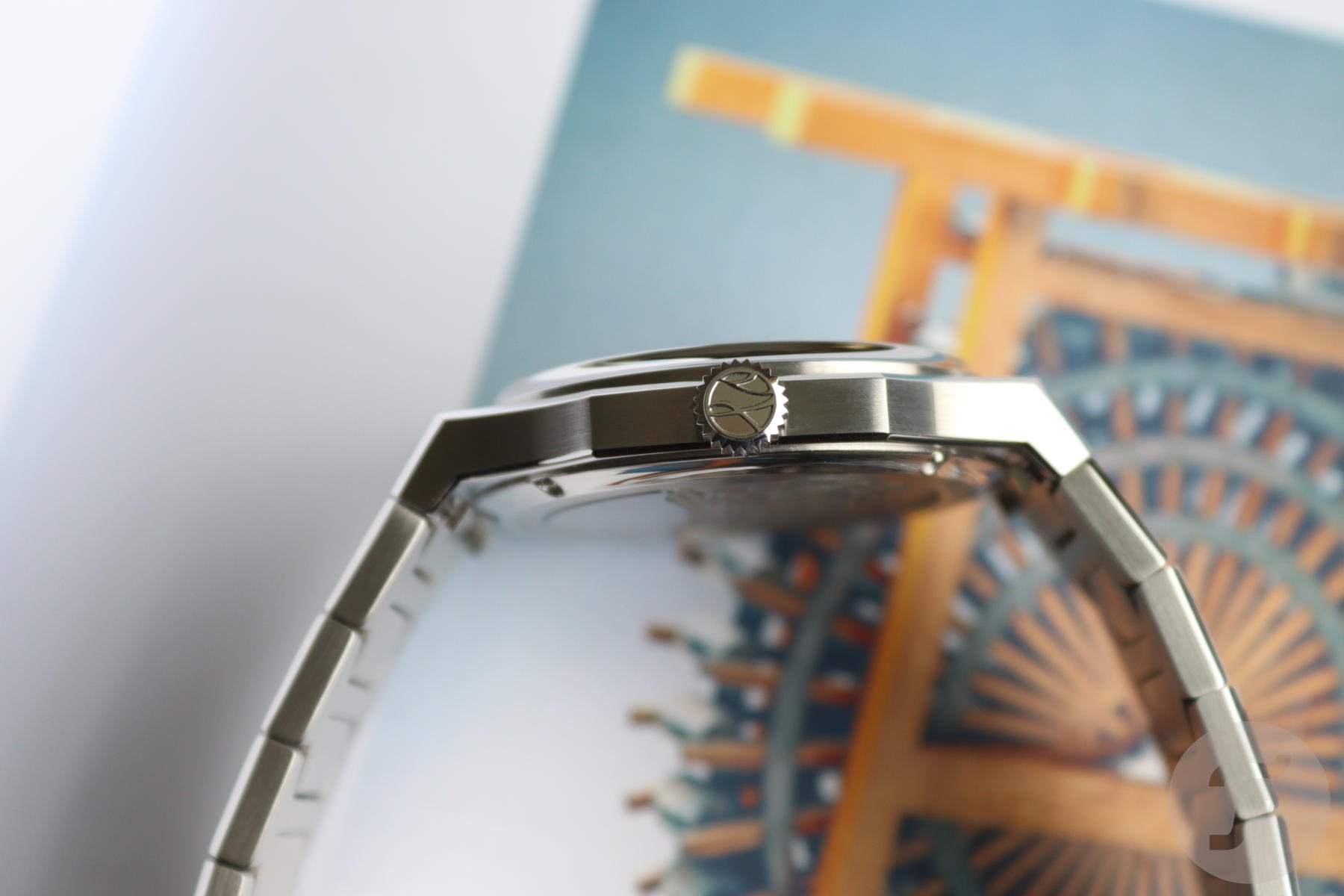 Guilloché is a type of engraving. A craftsperson can engrave geometric patterns into metal using a sharp cutting tool. The rose engine is the tool used to engrave those patterns. While not a common art form these days, guilloché dials are popular in watchmaking due to the classical origin of the craft, as well as the beautiful patterns created. Authentic hand-guilloché dials are often expensive because of the time it takes to produce each one. In the case of the Atelier Wen Perception, Master Cheng takes around eight hours to produce a single dial, but the challenges don’t stop there. 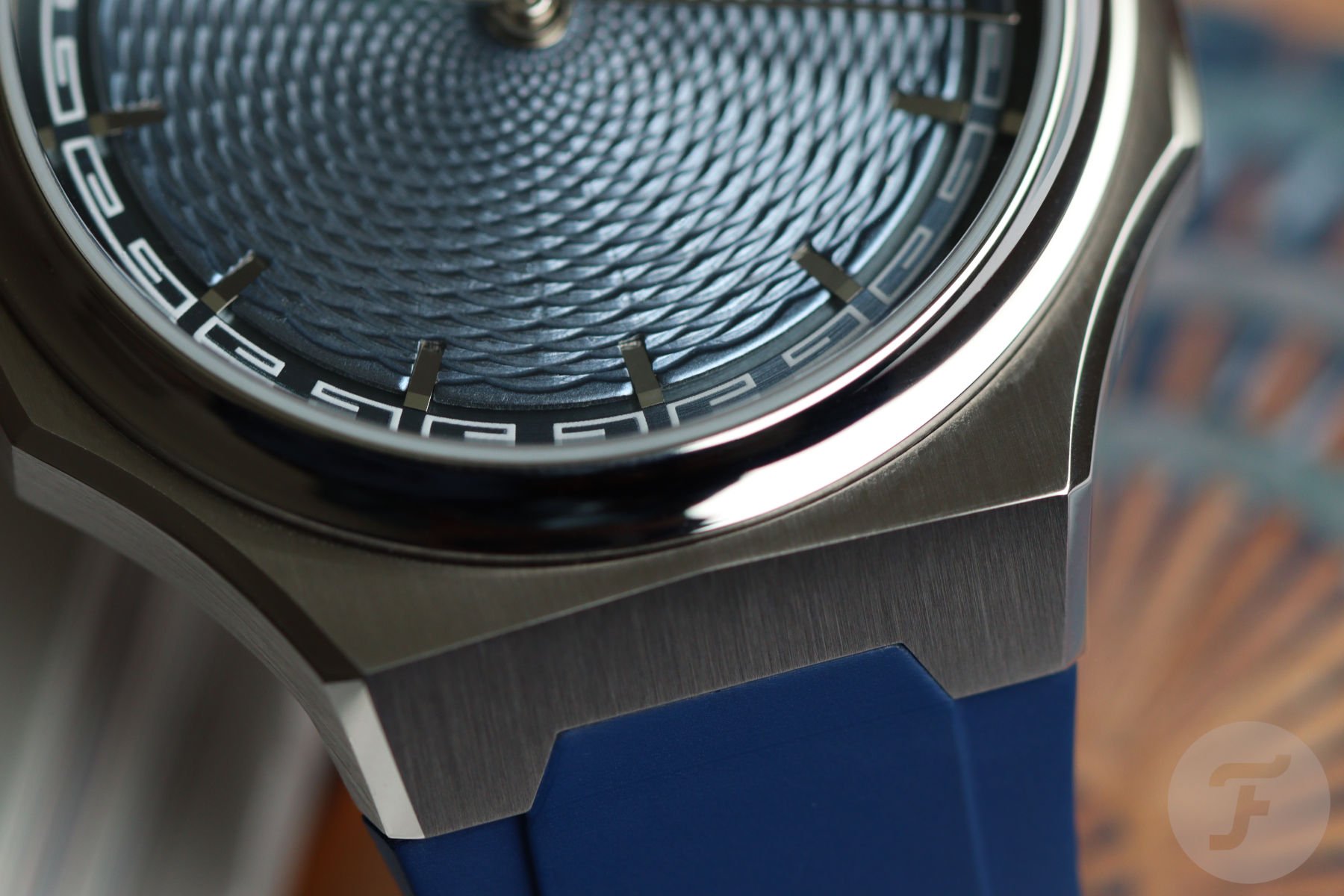 It’s an intricate and highly-skilled art where Master Cheng’s steady hand must complement and work with his rose engine. Special cam, feeler, and crank setups determine the designs while the Cheng carefully guides the cutting tool by hand. The demands are extreme, and a single deviation in the pressure exerted will render the entire dial useless. This means he must start everything over from scratch. 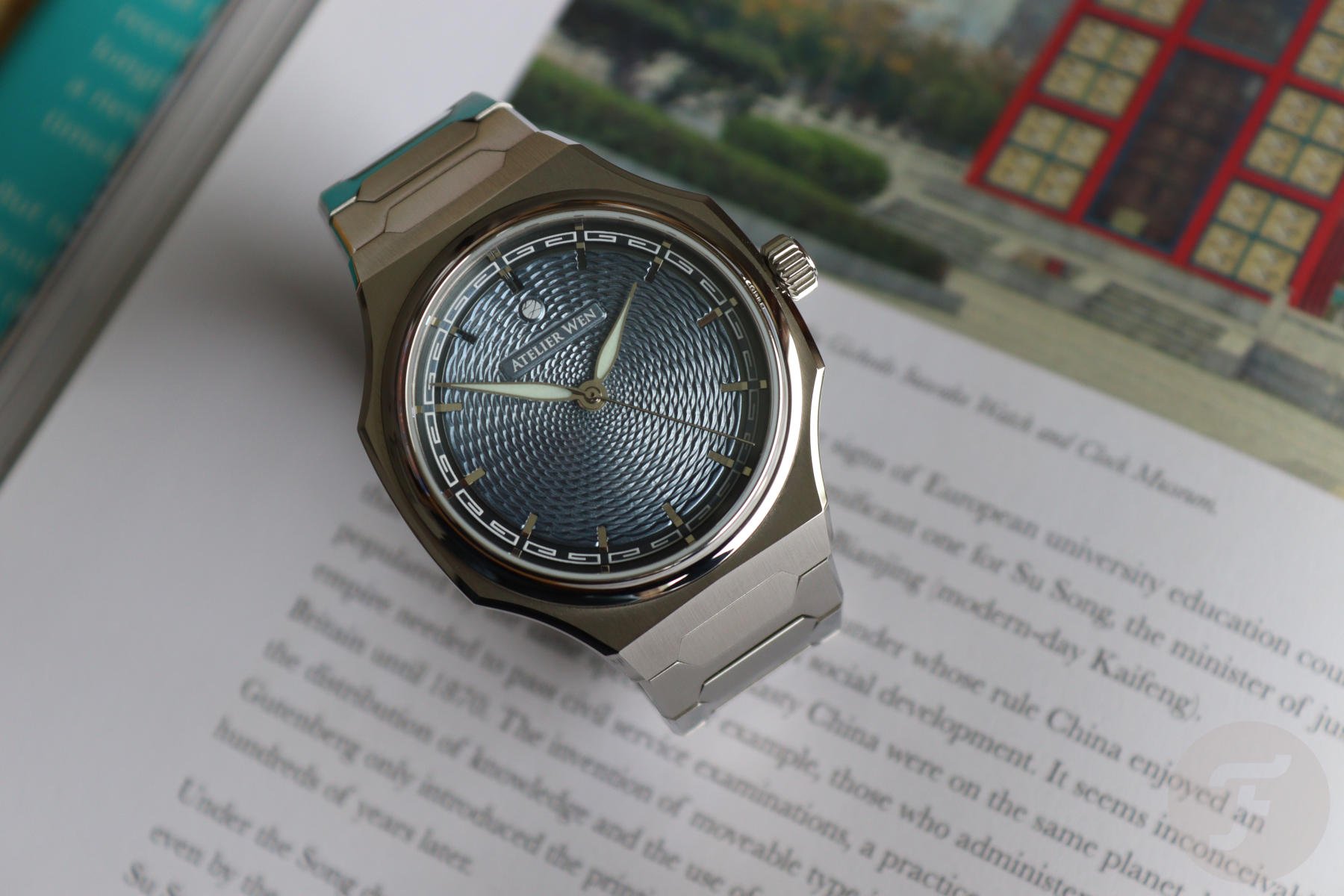 The 904L stainless steel case is a truly remarkable creation. That may sound like lip service or a bit of BS, but I mean it. The main case is an octagonal shape, yet the diagonal edges are shapely and curved, inspired by the curved silhouettes of Chinese pagodas. A smooth, polished chamfer graces the upper shoulder of the case, running on the edge of the lugs. The flat upper surface of the case has a simple brushed finish, allowing the wearer to focus their gaze on the beautiful scooped bezel, which also mimics the pagoda shape.

The inspiration becomes instantly apparent if you look at the case from its side profile. Furthermore, the central links of the steel bracelet feature the same hexagonal shapes found throughout many elements of Chinese architecture. The bracelet is very comfortable, although I did experience a little bit of arm-hair snagging from time to time. There’s not much you can do about that, though.

I want to take a moment to talk about the Perception clasp, as this is one of the unexpected standout points of the watch. Hand on heart, I can say this is one of the nicest clasps I have seen in a long time. It’s a fully custom-designed number, and the attention to detail in size and operation shows. A slim clasp was in order for a slim watch, and Atelier Wen delivered with a real doozy. It uses a two-button system to release with a cleverly integrated micro-adjust function operated using the button disguised as the brand’s logo. The operation is flawless and truly one of the best micro-adjust systems I’ve ever seen. It’s not cheap or easy to design and produce a high-quality custom clasp, but Atelier Wen has set the bar high for anyone who dares to try it! 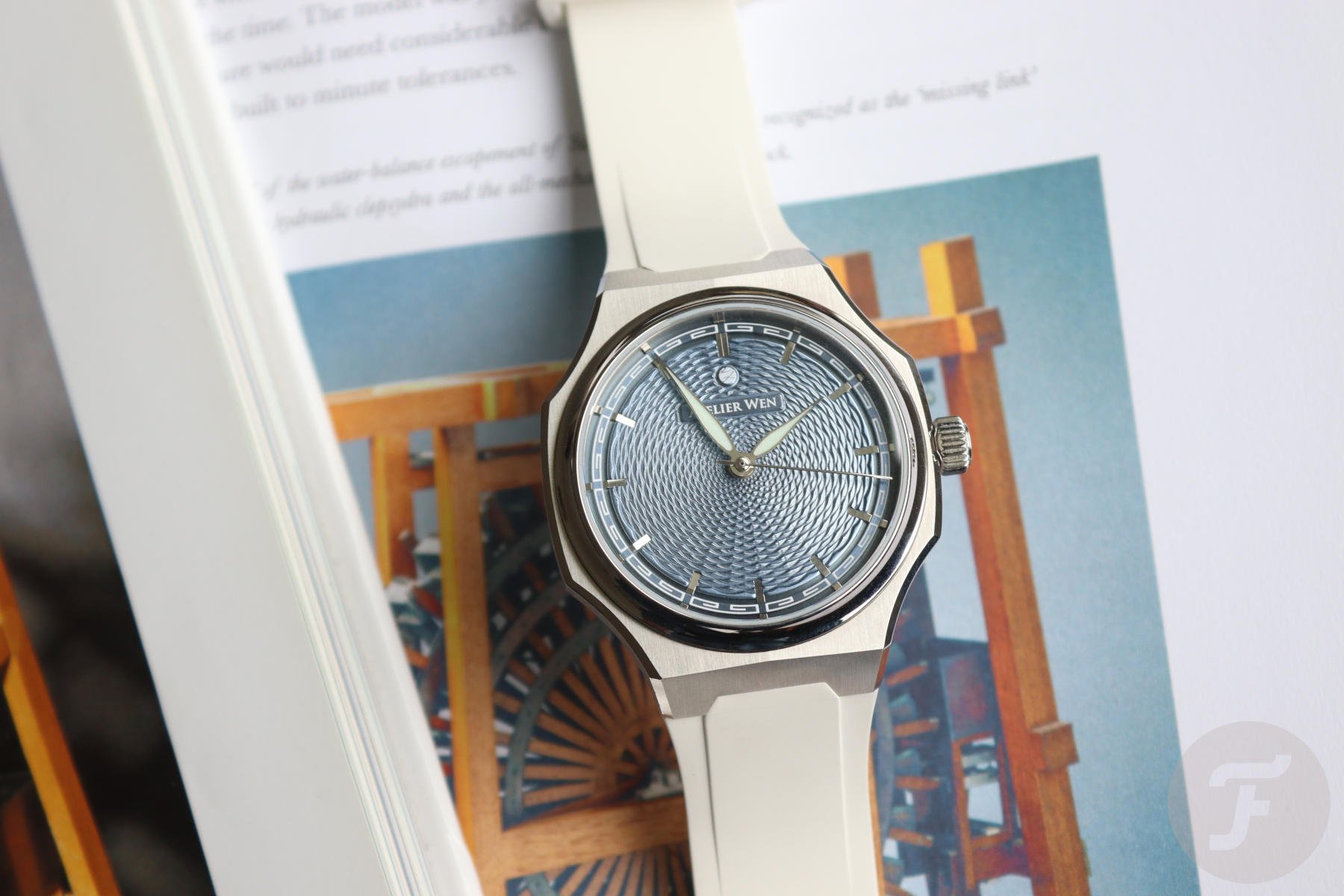 For those who are not so keen on the bracelet or perhaps just want to swap it out for other strap options, Atelier Wen has designed the strap/lug integration quite cleverly. It’s not actually a proprietary connection as it may appear. In fact, any 18mm watch strap will attach via regular spring bars — music to many watch lovers’ ears, no doubt. However, Atelier Wen has also produced some rubber straps for the Perception, which also appear fully integrated thanks to a custom end piece. 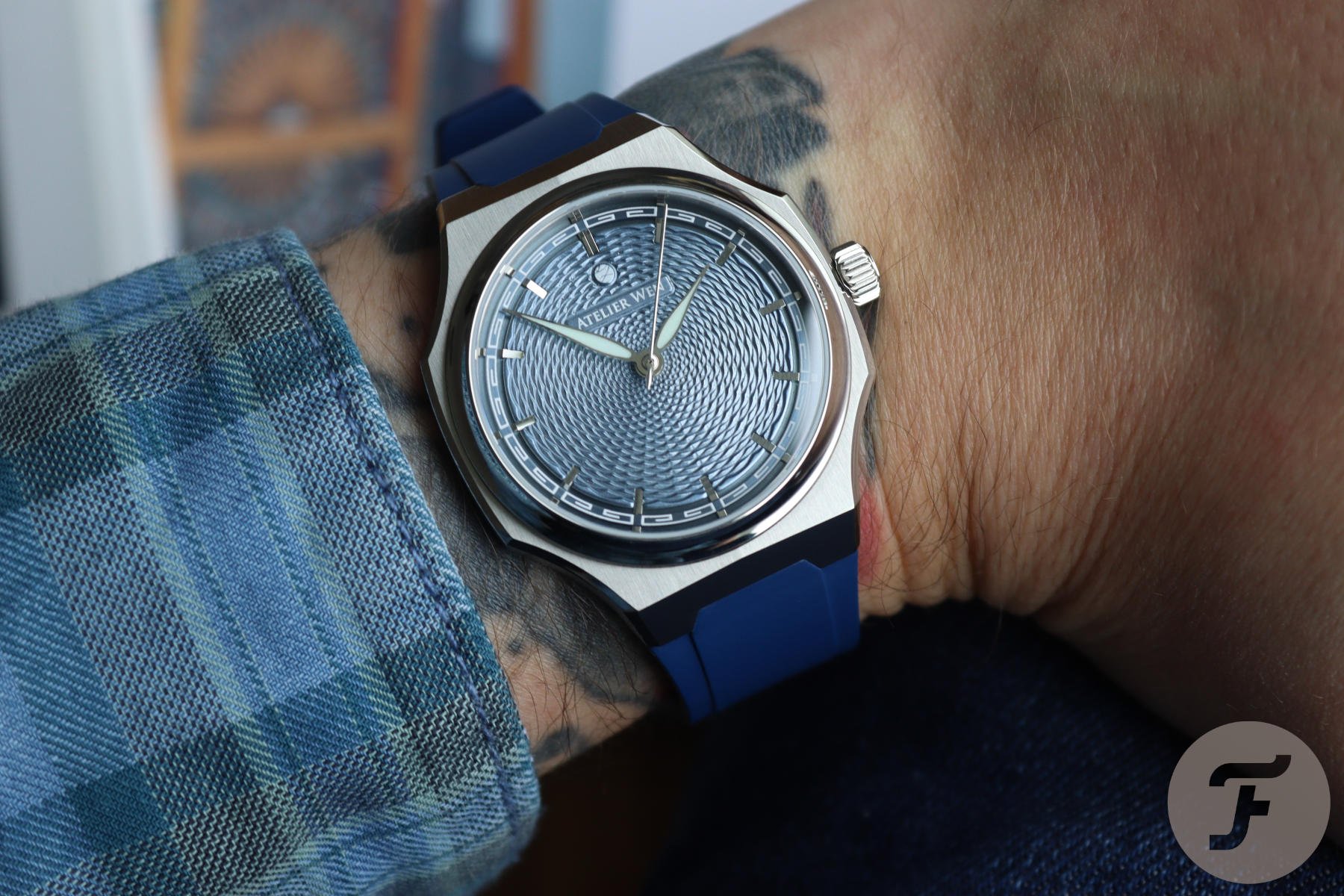 Made of FKM rubber, they’re incredibly comfortable. Unfortunately, they only had XL-sized straps to send me, so I could not get a suitable sizing. Aside from the photography, I wore the Perception on the bracelet for the week I had it on loan. That said, the rubber straps are lovely, and I was a big fan of the white rubber against the icy blue dial.

As you can guess, the movement is proudly Chinese. No Swiss movements here! Atelier Wen has worked with the Dandong movement factory to produce a customized version of its new SL1 architecture. This movement has the reference SL1588. Modifications include a slimmer profile, refined accuracy (+/-10 seconds per day versus the +25/-15 of standard Peacock movements), and a longer power reserve of 41 hours. Since the production of prototype watches and movements, Dandong has been working on removing the “phantom” date position and adding hacking functionality. 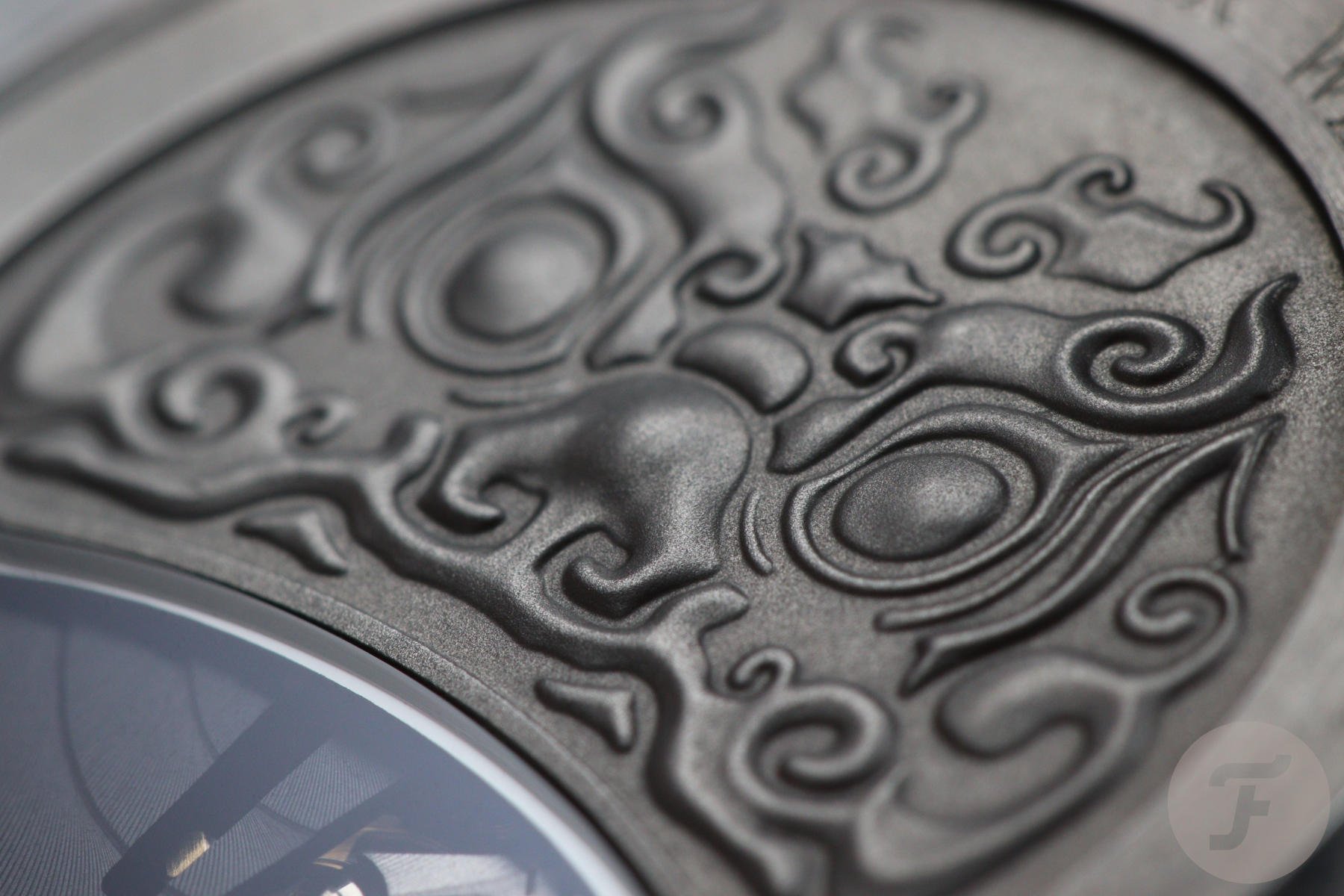 Atelier Wen initially had 300 pre-order places for the Perception (100 pieces of each color) at the launch. Ambitiously, or perhaps naively, the brand had assumed they would last for around one month. Needless to say, these 300 pieces were snapped up by savvy collectors in record time yesterday afternoon. However, all is not lost! Thankfully, the Perception is not a limited-edition watch, and more are on their way. Due to the nature of the handmade guilloché dials, there’s a limit on the number Master Cheng can make. He’s only human, after all. As such, the Perception has an annual production limit of 500 pieces. 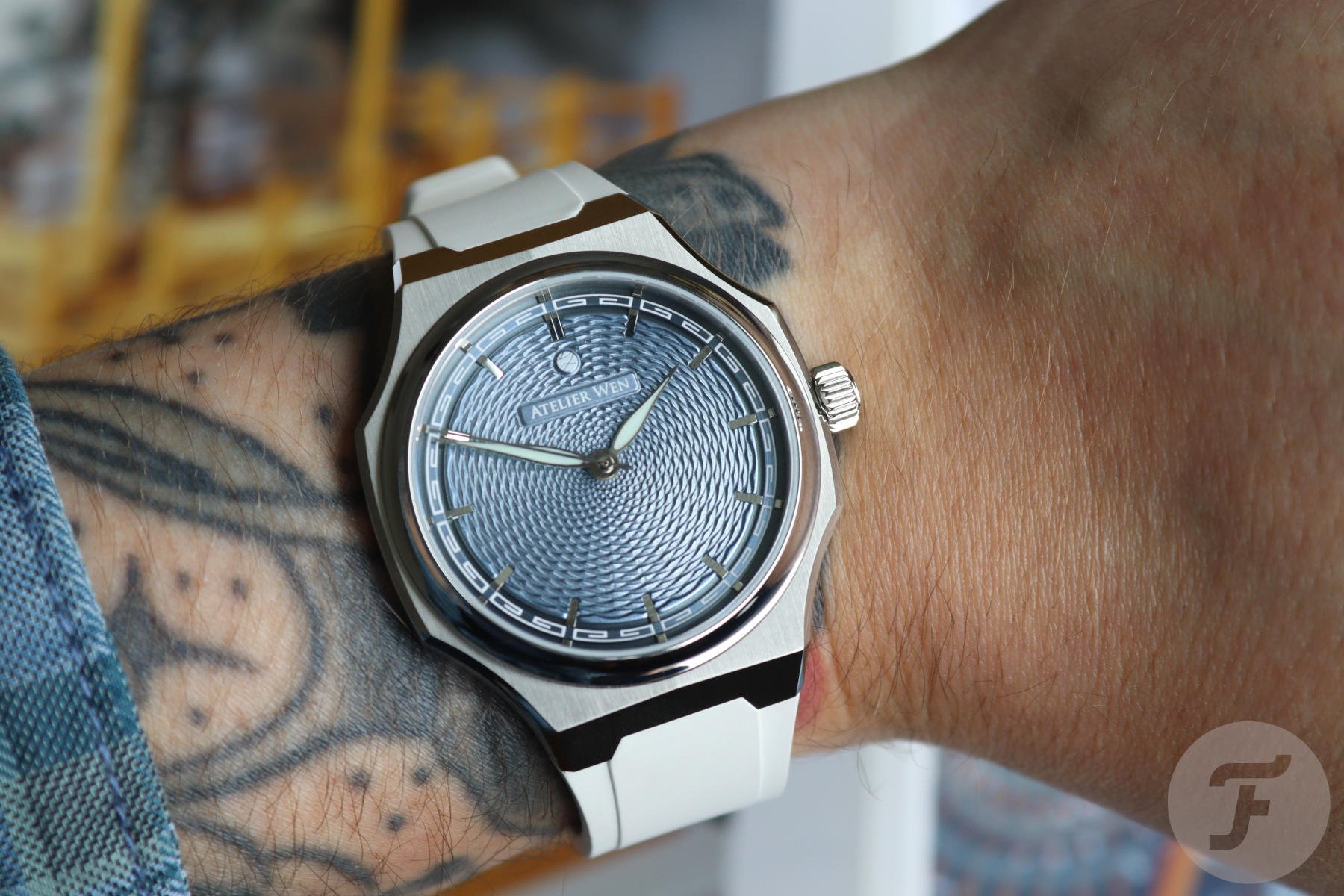 Once the pre-orders have shipped, Atelier Wen plans to have an additional small number of watches available in October 2022. Once these are gone, orders will reopen again in February/March 2023 for the next batch. New colors will potentially be available too! From there on out, the Perception will continue to be made as batch production. So, if you’re keen to add one to your collection and you have the chance to grab one, don’t delay!

The pre-order price is $2,088 USD, and the retail price will stand at $2,588 USD. For more information, please visit the Atelier Wen website.