Why Pay Double Retail For A Royal Oak When You Can Get A [Re]master-piece For Less?

Sorry for the [Re]master-piece pun. The Audemars Piguet [Re]master01, however, is just that, and rather it’s accessible compared to the R.O. When you can have this, why pay double retail for a plain Royal Oak? I’ll throw some petrol on a fiercely burning fire by saying that I understand Rolex, Patek, and AP. I understand them not ramping up production of their steel sports watches. They could all quadruple their output of steel grails, and Patek could pump out the three-hand Nautilus again, but for what?

Imagine if BMW only produced the 3-series to satisfy demand? Do we want Armani to only produce show-off logo T-shirts and keyrings instead of Haute Couture? Many brands have so much more to offer, but people can’t get enough of their run-of-the-mill output. Rolex and Audemars Piguet are, for the general public, known purely for luxury sports watches, and in Rolex’s case, ironically meant as a diver’s tool. For Audemars Piguet, the Royal Oak has turned its fortunes around, but at what cost? Yes, for God’s sake, keep the production of the Royal Oak low so we can discover the rest of the brand’s watches. This situation has resulted in some surprises from the AP over the last few years, including purple ones. Nevertheless, we still mainly desire the Royal Oak, to the point of paying double or triple retail, following the Instagram herd. 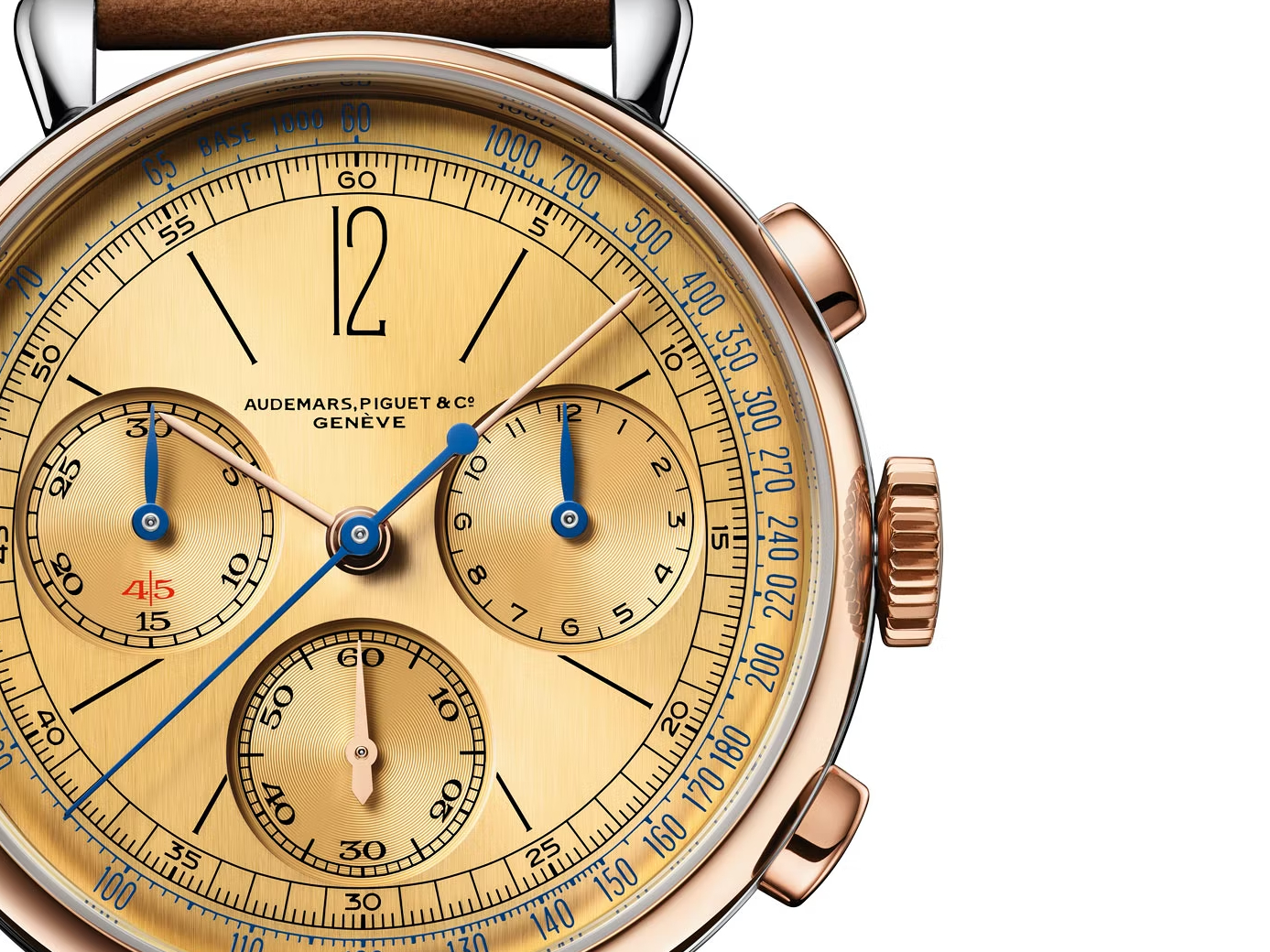 This might just have been the pitch of the bold designer who suggested the quirkily named [Re]master01. And it fits. Another big watch publication even announced it as a whole new collection of watches from Audemars Piguet, something that we don’t see often. But it was a one-off, and like the Code 11.59 that its movement was based on, the reception was mixed. This shows in the pre-owned prices, despite big-time collectors like Eric Ku embracing the simple fact that the [Re]master01 is the best of both worlds. It is fiercely vintage while being technically contemporary, and unlikely as it seems, it’s a robust daily wearer. We love ’60s sports watch reissues, but a dressy ’40s chronograph? Was it too niche? 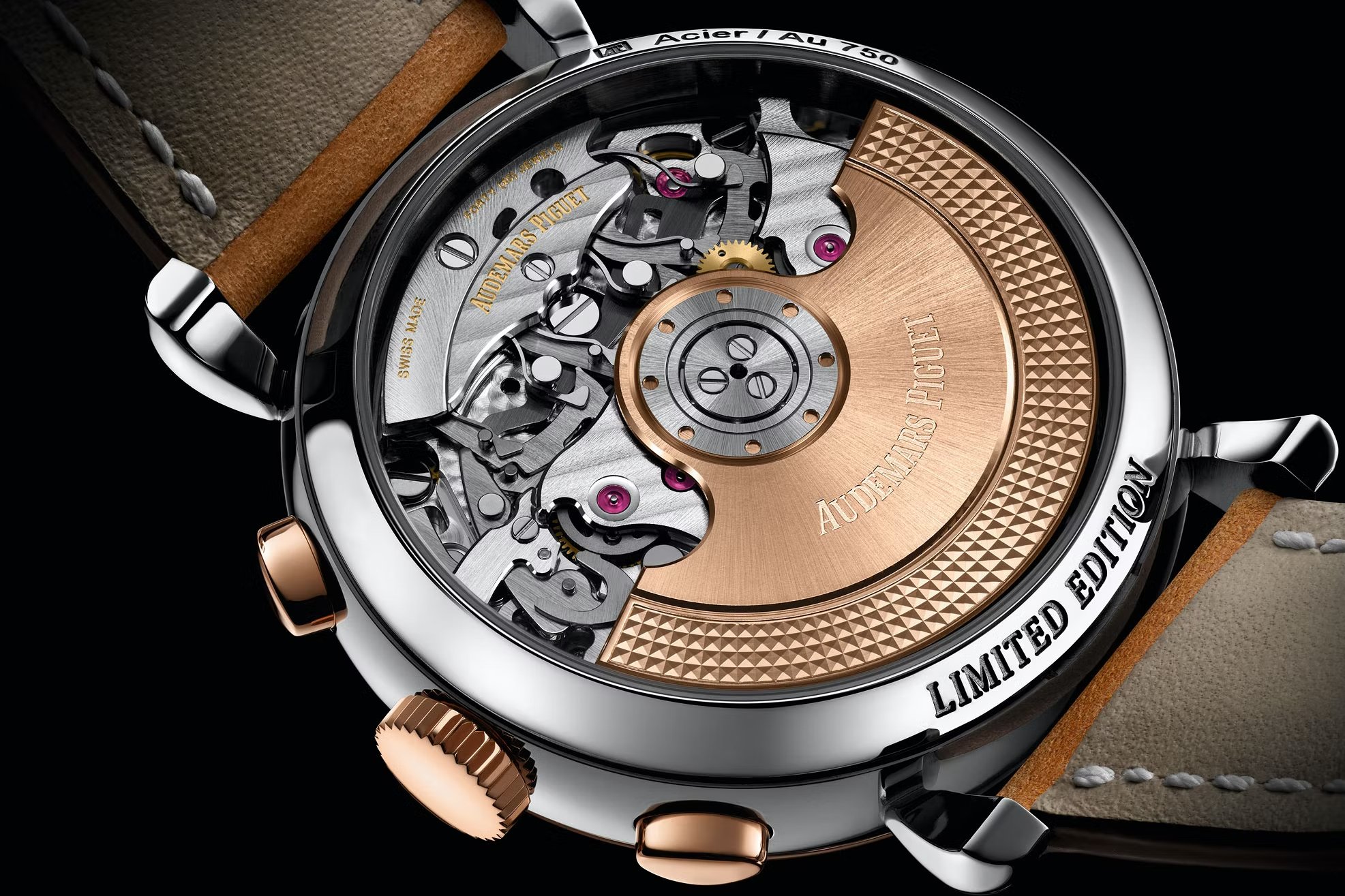 What about the Code 11.59 movement within?

Like a 2022 engine in a retro Singer Porsche, the movement powering this watch is thoroughly modern. It is the Audemars Piguet caliber 4409, the in-house automatic chronograph familiar from the Code 11.59. In that watch, it goes under the 4401 nomenclature, and here, it has had the date complication removed. The skeletonized rotor of the 11.59 has been swapped for one with an elegant hobnail pattern, finished to the exemplary standards expected of Audemars Piguet. I know, it is not hand-wound like the original ref. 1533, but get with the concept — this is a remaster, not a reissue. So, this is a beautifully finished movement, but not made for the same purist that would buy an Omega Speedmaster “Ed White”. It’s exquisite but robust with a superb 70-hour reserve. 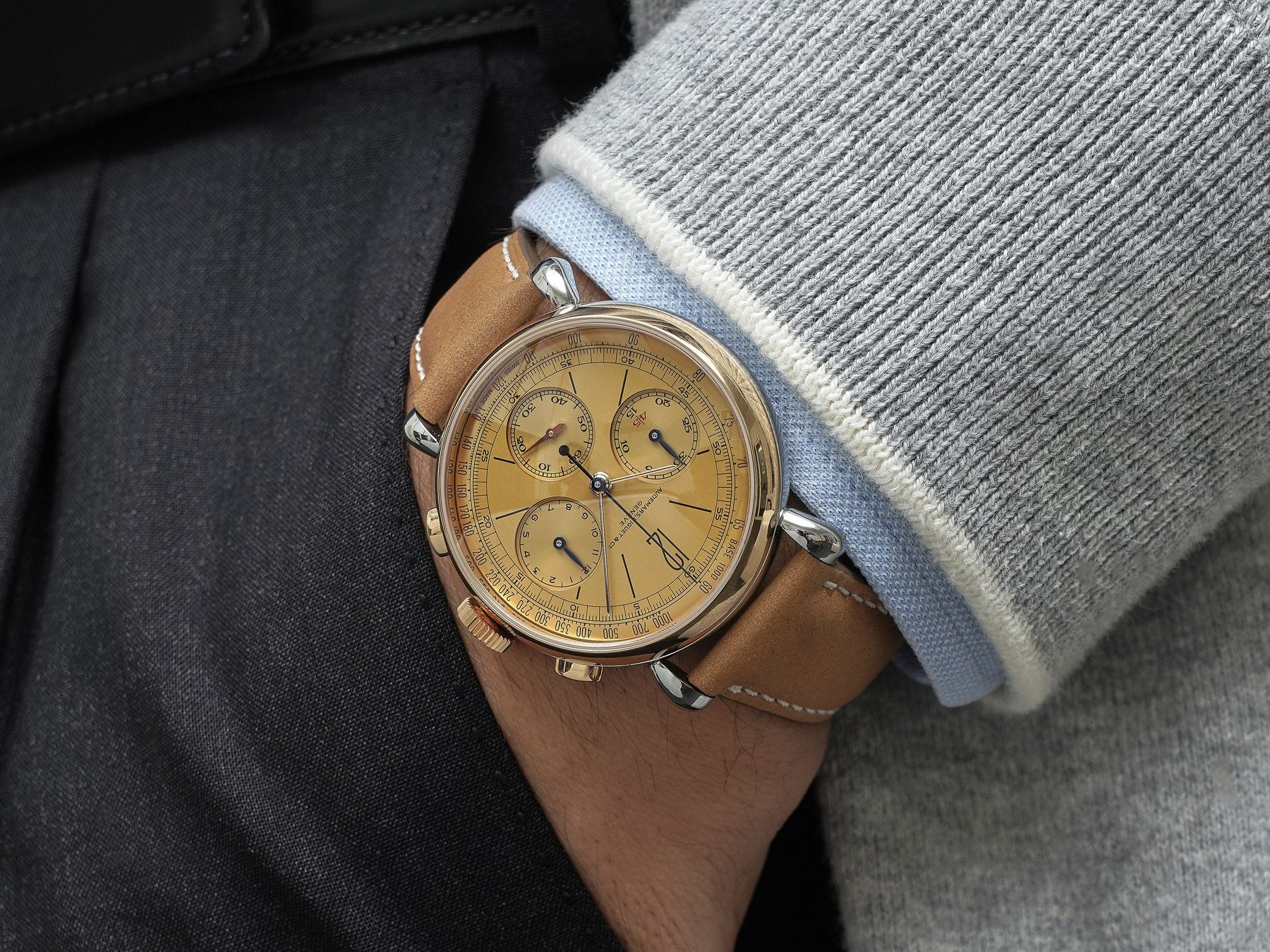 Was it too much two-tone goodness?

With an RRP of CHF 53,400 at its launch, the 500-piece run had a fair sticker price, especially considering the research behind it and the unique position within AP. It might never make a return, but right now, it represents surprisingly good value. And not only that, it has a rich pedigree. Based on one of the very few chronographs produced by Audemars Piguet in the early 20th century, the [Re]master01 paints a rich picture of its heritage. The size is a modern 40mm, while every detail is true to its 1943 inspiration. This even extends to the delicious teardrop lugs soldered onto a two-tone case of steel and rose gold. AP’s Michael Friedman said upon the release that “…creative expressions of case form and dial design have occurred during every decade of our history.” He also underlined that “this is not a historic reissue — it is a contemporary remastering of one of our past creations.” 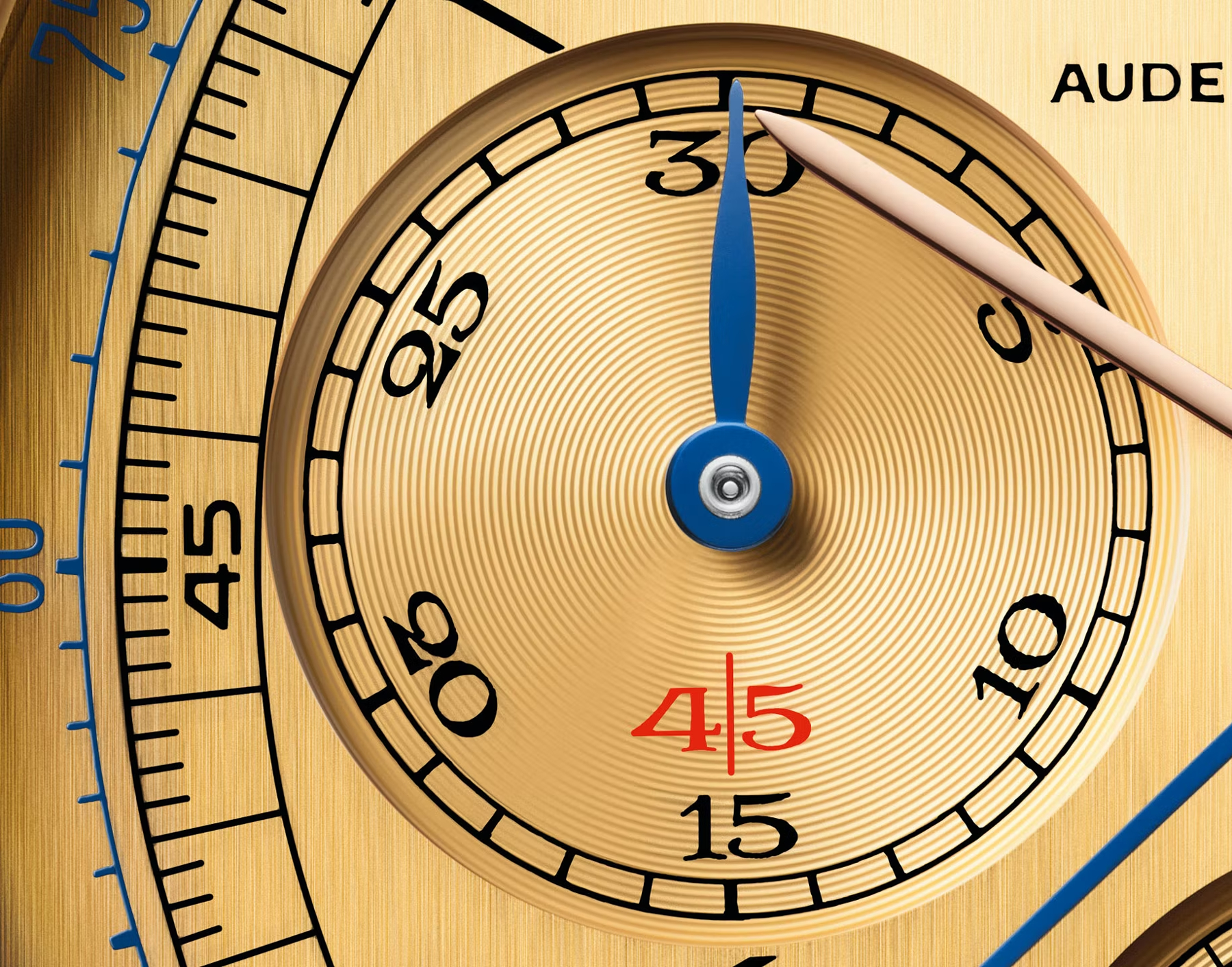 The soft shape of the case instantly takes you back to the designs of the ’30s and ’40s, with an exquisite finissage that the artisans of the last century could only imagine. But it is very much about the dial, which smashes your preconceptions with a barrage of colors and details. The dial has a gold tone close to champagne, with the brushed finish setting a bright backdrop to blued hands and a tiny touch of red. I adore the slender Art Deco numeral “12” with its sharp kink-up of the flat leg of the “2”. The red “45” print on the minute totalizer is also a welcome distraction. As with any early-mid-century chronograph, there are masses of information on the dial, and as such, it will still seem compact at 40mm. It is a perfect recreation and only slightly increased in size to fit better with our tastes. Would I have enjoyed the [Re]master01 more at 38mm? Sure, but that golden dial with its balanced raffishness surely deserves to be shown on a larger canvas. 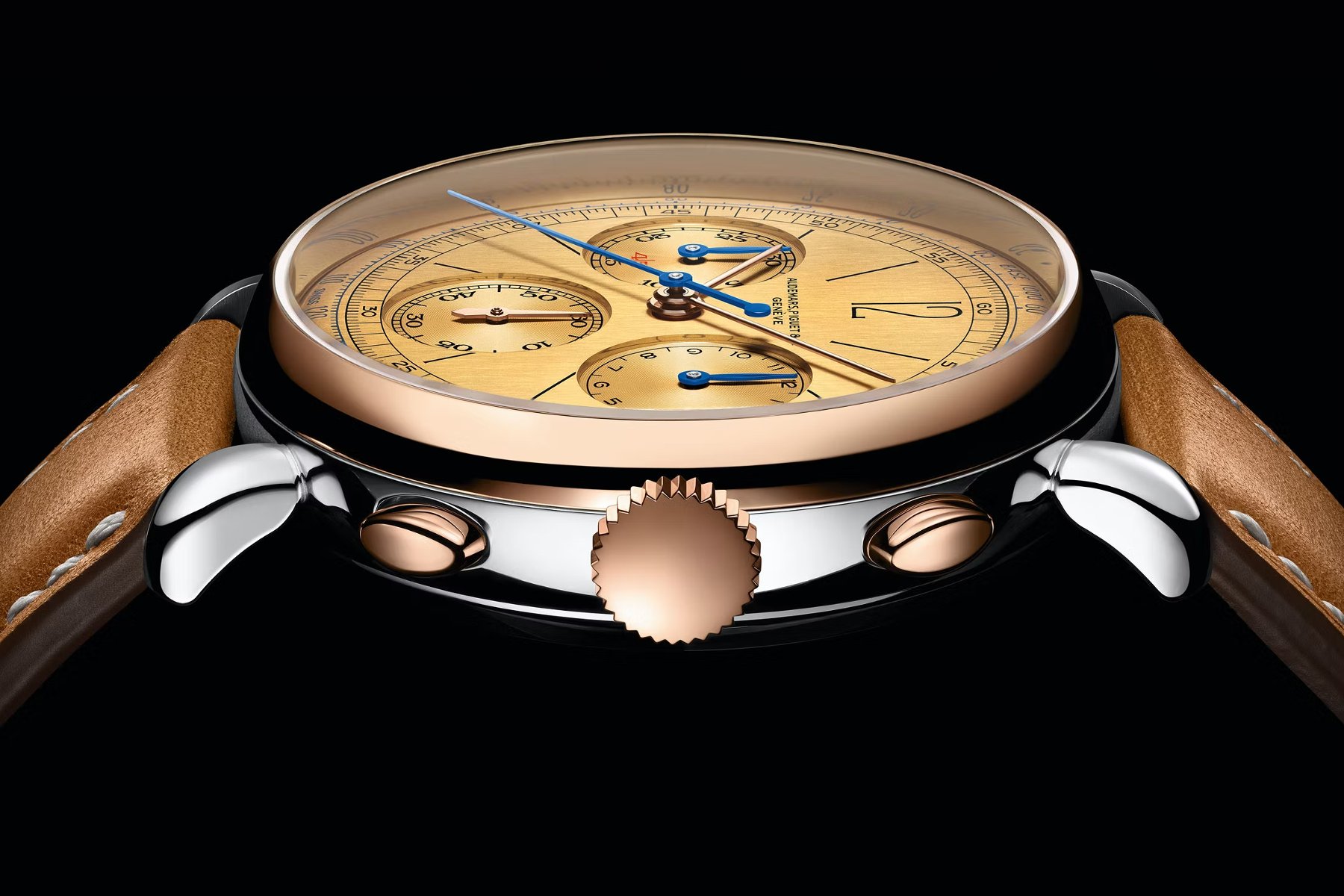 How can this be a great alternative to the Royal Oak?

There is nothing wrong with the Royal Oak. It belongs among the top sports watches of all time. However, it is nigh on impossible to get. The fact that this rather delicious and strictly limited piece is more easily available at a good price is baffling. It might seem unfair to put the limited [Re]master01 up against the iconic (that word, sorry) R.O., but for a twisted reason. I am not lying if I say there are a fair few more intricate, hand-assembled details within the [Re]master01. Even at more than double the retail price 41mm Royal Oak, CHF 53,400 was a fair price in 2020. Today, however, that has flipped 180 degrees in unexpected favor of the [Re]master01. 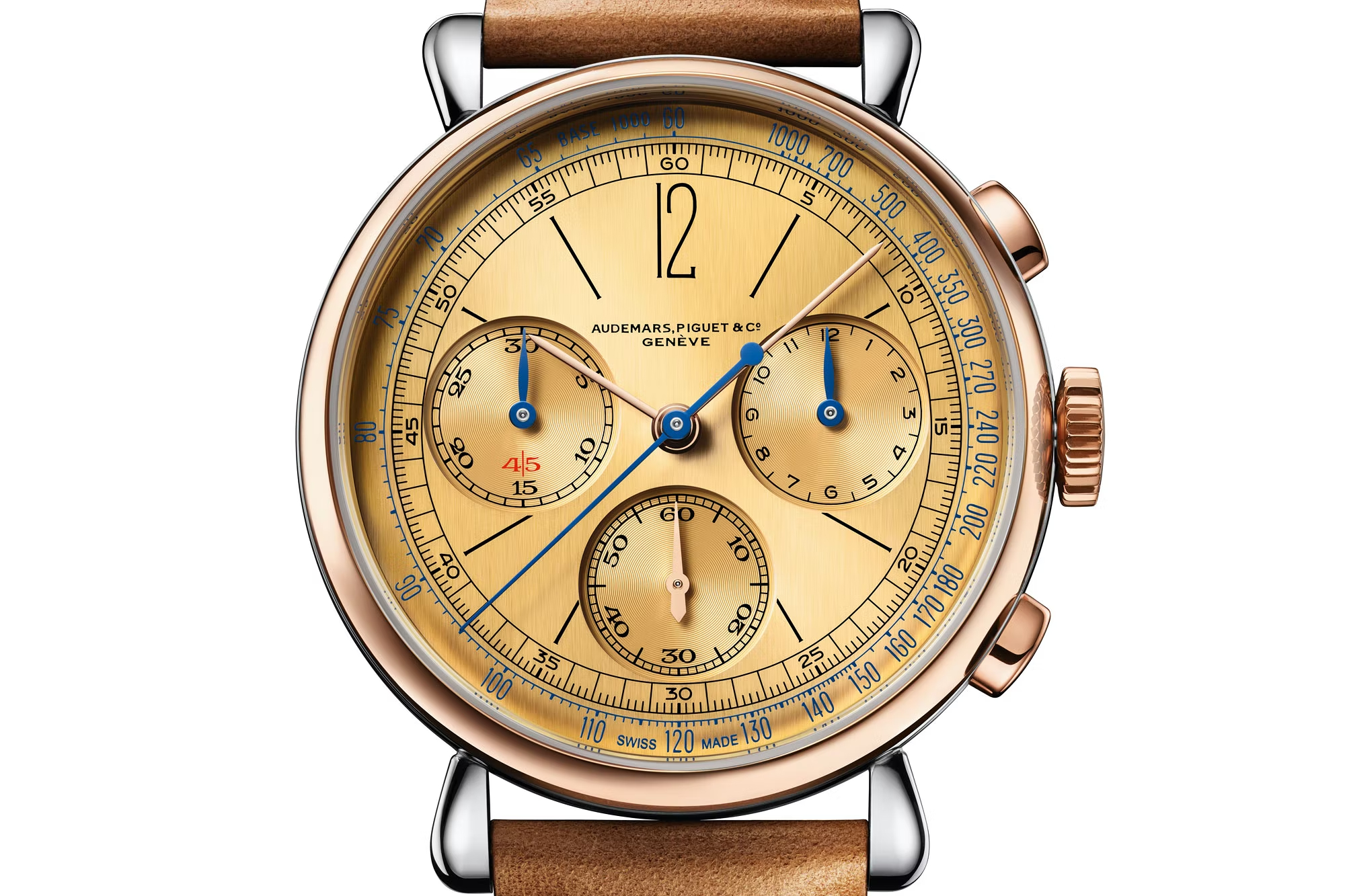 The madness of the market

By now, we know the situation all too well; the surge in popularity has shifted demand toward the steel sports icons. But is it for good? The latest 41mm Royal Oak ref. 15500 in steel has a retail price just under CHF 23,000, and the chronograph is a bit over CHF 30K. To be fair, the 38mm chronograph is the nicer-wearing one, but I’m sticking to 41mm as a reference point. Still, these are all moot points anyway, as you won’t be able to get them at your local AD. As usual, check out the pre-owned market, and everything changes. Even a 2020 ref. 15400 is around CHF 50,000, while a 2022 model is upwards of CHF 54K. The 41mm Royal Oak Chronograph is all over the map, ranging from CHF 51,000-300,000+ depending on the model year. This is today’s reality, and it doesn’t look like it’s changing anytime soon. 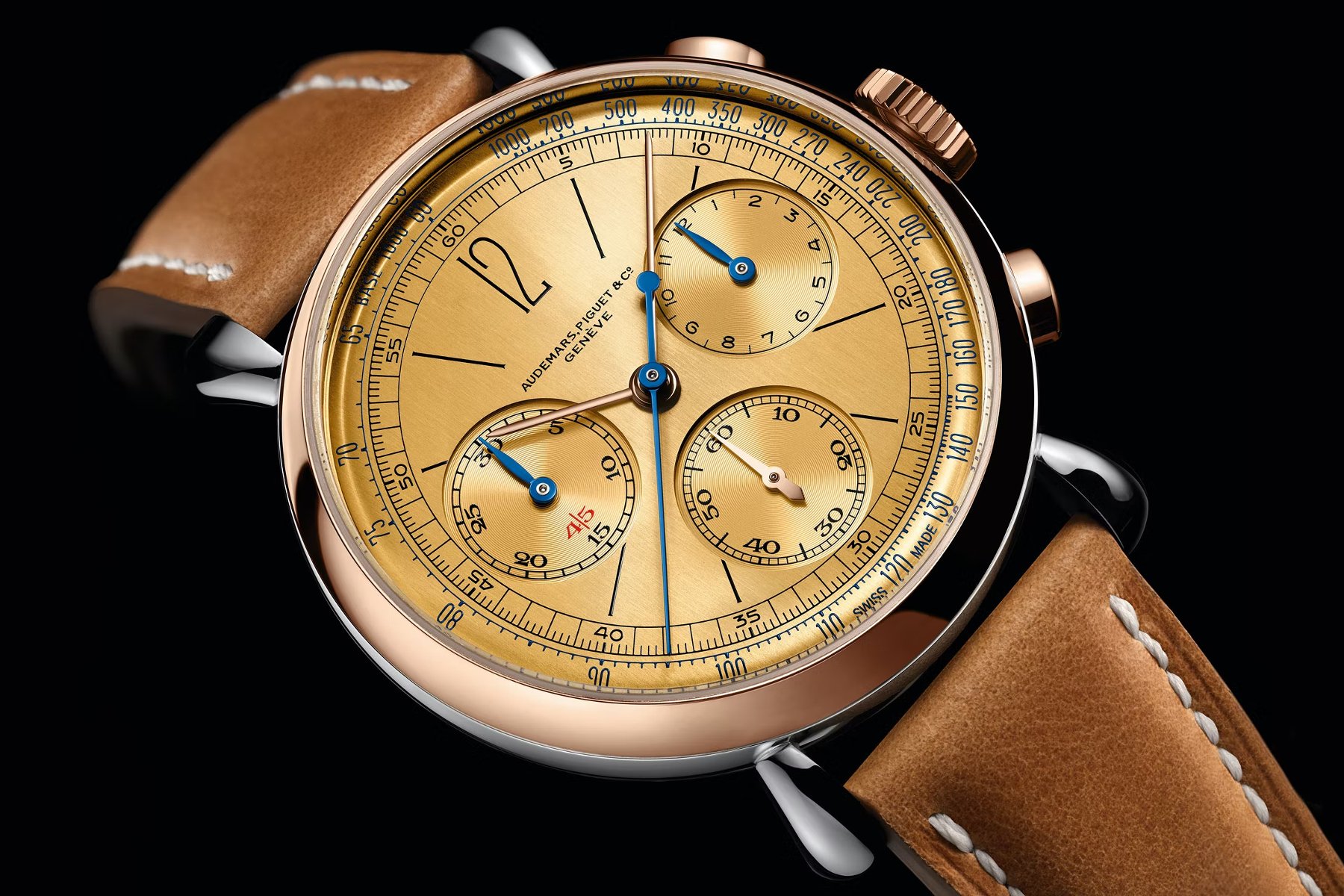 But surely the limited [Re]master01 has risen in value?

You would think so, with the [Re]master01 being limited and not readily available. Perhaps CHF 70,000-100,000 could secure one? But here’s the kicker. There are a fair few on Chrono24, where the [Re]master01 can be found for around CHF 47,000. Yes, that is less than its original retail price of CHF 53,400. This watch was limited to 500 pieces and only produced once, unlike the Royal Oak with thousands produced over the last five or six years. But this is the reality in 2022. If you go back in time to 2010-2015, who could’ve imagined that 53-grand limited watch from AP would beat the half-priced steel Royal Oak on the pre-owned market? I know which one I’d choose in a heartbeat, and it’s got a soft, brown leather strap and two oblong pushers in pink gold.

Fratelli, are you caught up in the steel sports watch hype, and would gladly spend double on a fairly ubiquitous Royal Oak? Or does this labor of love in steel and two shades of gold seem like quite a bargain in 2022? Let me know in the comments.

Hot Topics
Laventure Automobile Chronograph With A Proprietary Movement — Marking A Huge Leap Forward For One Of The Industry’s Most Promising Brands
155 comments
Fratello Exclusive: An Inside Look At The MoonSwatch Production Facilities
75 comments
Selling Your Watch To A Dealer Or Trading It In — Tips From A Former Watch Dealer
49 comments
Summer Splash — Round 2 : Jorg’s Tudor Pelagos FXD Vs. Lex’s Hublot Big Bang Integral Ceramic Sky Blue
47 comments
The Top 10 GMT Watches Right Now — From Ball, Grand Seiko, Tudor, And More
44 comments
Popular
A Question From A Reader: “Which Modern Speedmaster Is Closest To The Original Moonwatch?”
Robert-Jan Broer
13
10 Tips For Better Watch Photography
Bert Buijsrogge
11
Hands-On With The Seiko Prospex Dawn Grey Series
Robert-Jan Broer
9