After no longer being able to add any more things to his Audi S4, Chris Culver got into watches as a way to keep “hunting” for more Audi stuff. Since landing his first Audi watch more than five years ago, Chris has grown his collection significantly and has some pretty fascinating pieces.

Last summer I shared the story about a very special quartz Audi watch, that I’ve owned since 2004. I was a magazine car tester back then and I got it as a present from Audi when they introduced the A6 to the market. I liked it and I wore it a lot back then. When I found it in a box a few years ago, it brought back tons of wonderful memories. So I put it in a more visible place in my safe. Although I do not wear it often, it means a lot to me. 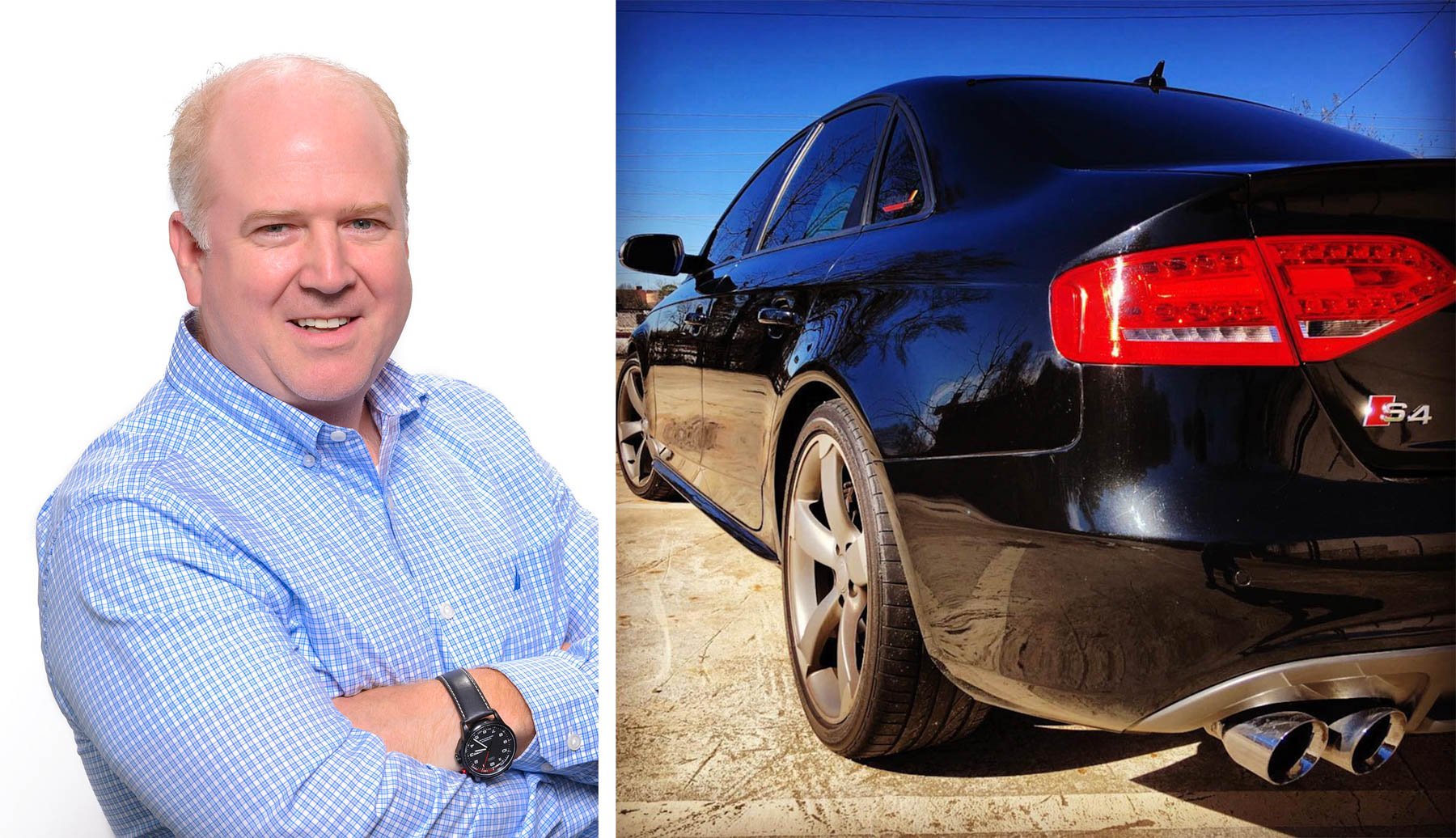 Chris is an architect living in the US. He recently found my article and commented that he has an extensive Audi watch collection. That’s was more than enough for me to reach out and get to know Chris a bit more. When I was younger, I also wanted my own car-watch collection. I was really curious about how it all started. “My first car in the States was an old Infinity G20, a real piece of junk. The motor finally blew up and then I got my first Audi A4, which my wife crashed. So that was my excuse to get an S4. I tuned and modified the car so much that there is not much else I can do to it. It‘s at about 500 horsepower. After no longer being able to add things to the car, I got into watches,” explained Chris.

Chris bought his first Audi watch in 2016 and decided to make it a collection a year after he got around another 20 Audi watches. When his wife found out about his new passion, he slowed down a lot. At that time he got to around 150 Audi watches. He already sold a few pieces, but he is sure he could get them back again. Before he was buying every Audi watch he saw, but over time it evolved into only buying nicer pieces. He is still on the hunt for a fairly priced Audi Muhle or Audi Sinn. Probably the biggest rarity is the Heuer Audi Sport Chronograph, which could undoubtedly be called the grail Audi watch. 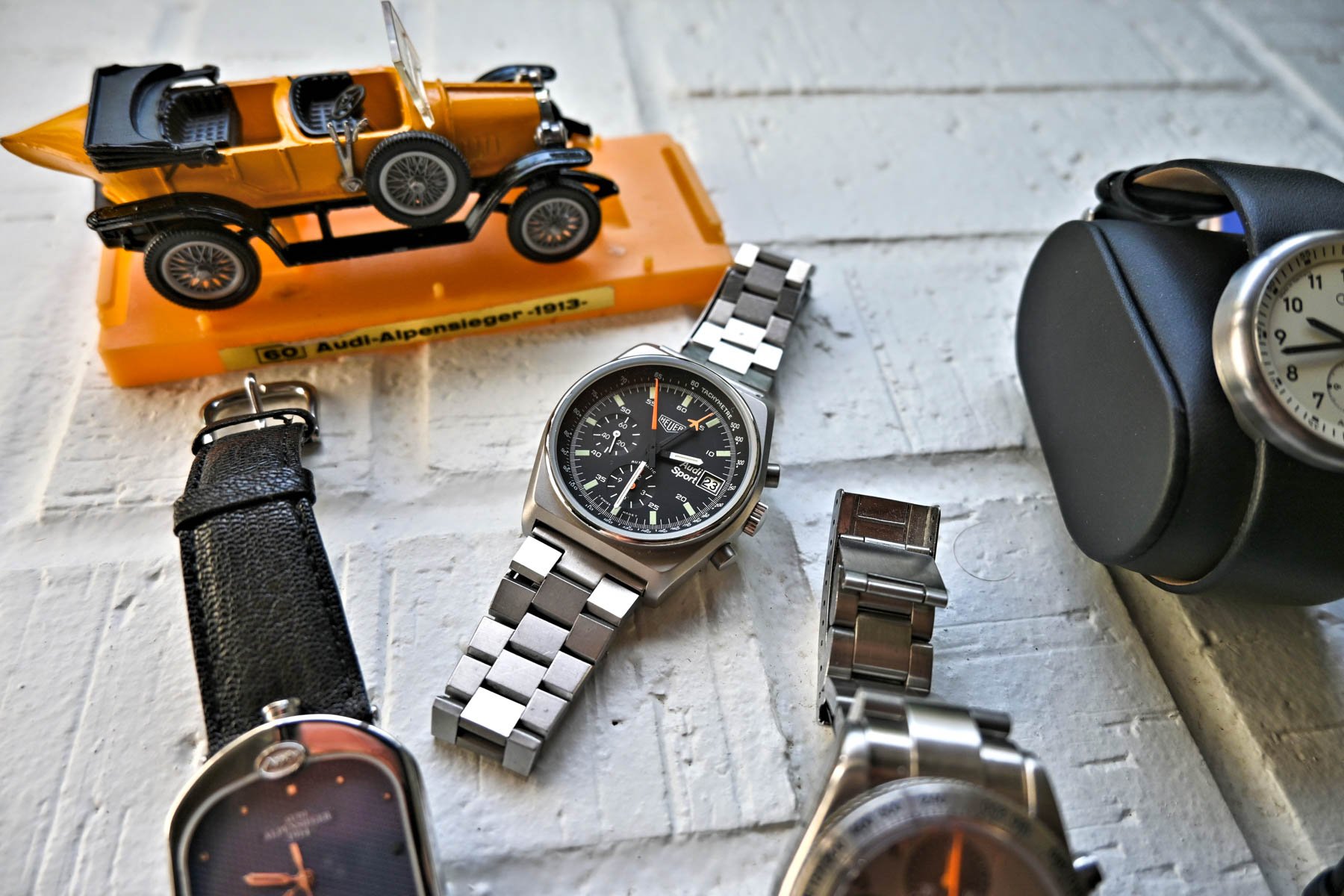 There were two dial versions with different designs of the 12-hours sub-register. Chris owns the rarer model that lacks the half-hour increments marks on the 12-hour counter. The watches were commissioned by Audi Sport U.K & David Sutton Motorsport Ltd. They were available only in the UK and based on the available information, was sold in the 1980’s only for around two months. The Heuer Audi Sport watches thus represent a very unique and very sought-after co-branding.

If it reminds you of other watches, you’re probably thinking of military chronographs with a 17 jewel Lemania Cal. 5100. This admirable movement also beats in the Heuer Audi Sport, but again interestingly enough, it was slightly modified. Audi made both the 24-hour register at 12 o’clock and the day window disappear, thus creating more space for the unusual branding.

Typically seen on other examples featuring a Cal. 5100. The day aperture was also removed in favor of the “Audi Sport” branding, making this configuration rather special. What a flagship watch in Chris’s collection, especially judging the fact that less than 100 Heuer Audi Sport watches are known to exist. 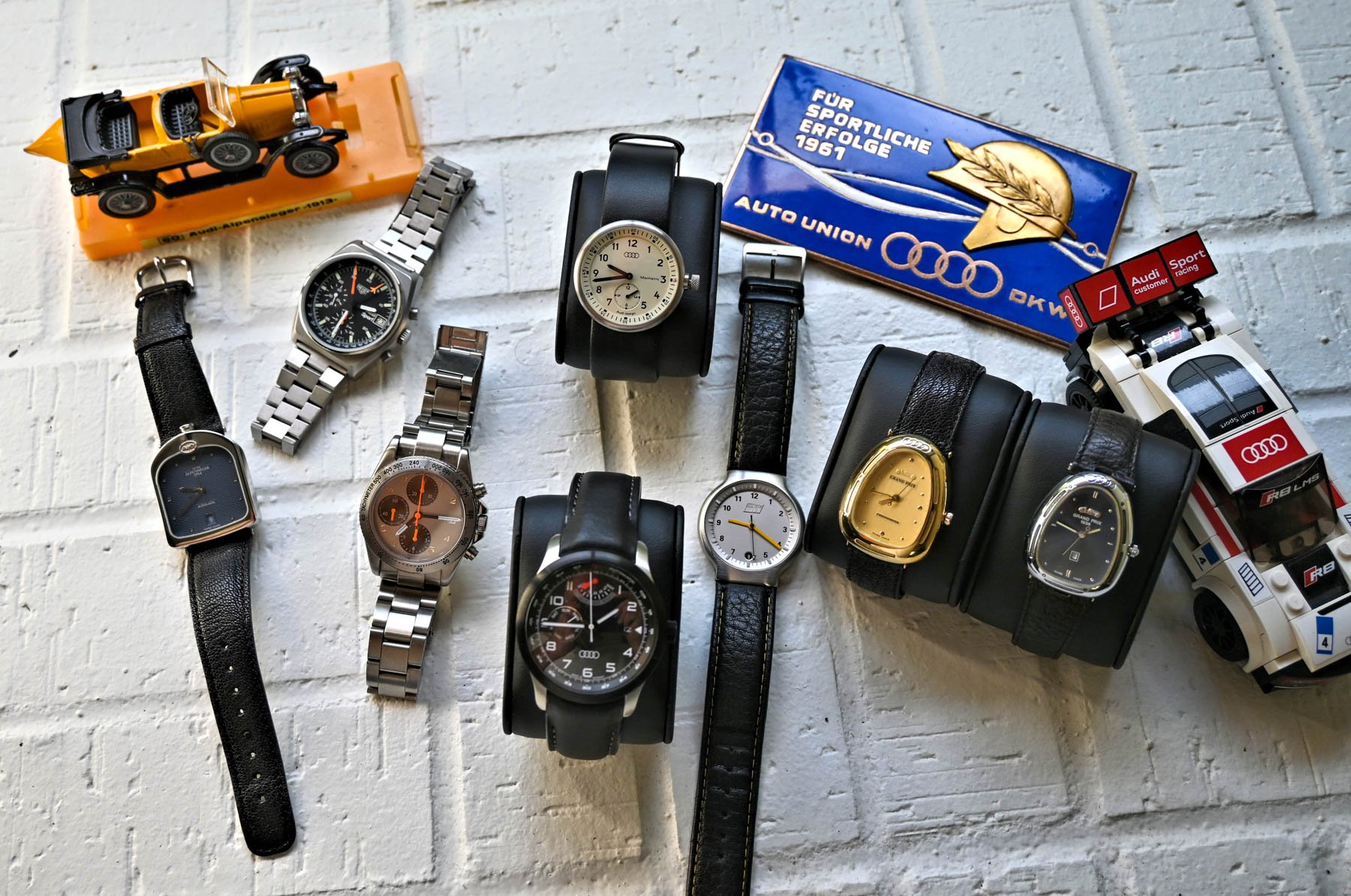 All sorts of watches

Chris is a busy man and he hasn’t had the time to properly catalog his watches yet. Using the rule of thumb here, he has around 30 automatic and 10 manual wound watches, the rest are quartz. I was expecting to see automatic watches, but up to 10 mechanical watches was a surprise. When I asked Chris about his other most beloved pieces besides the Heuer Audi Sport, he instantly knew. 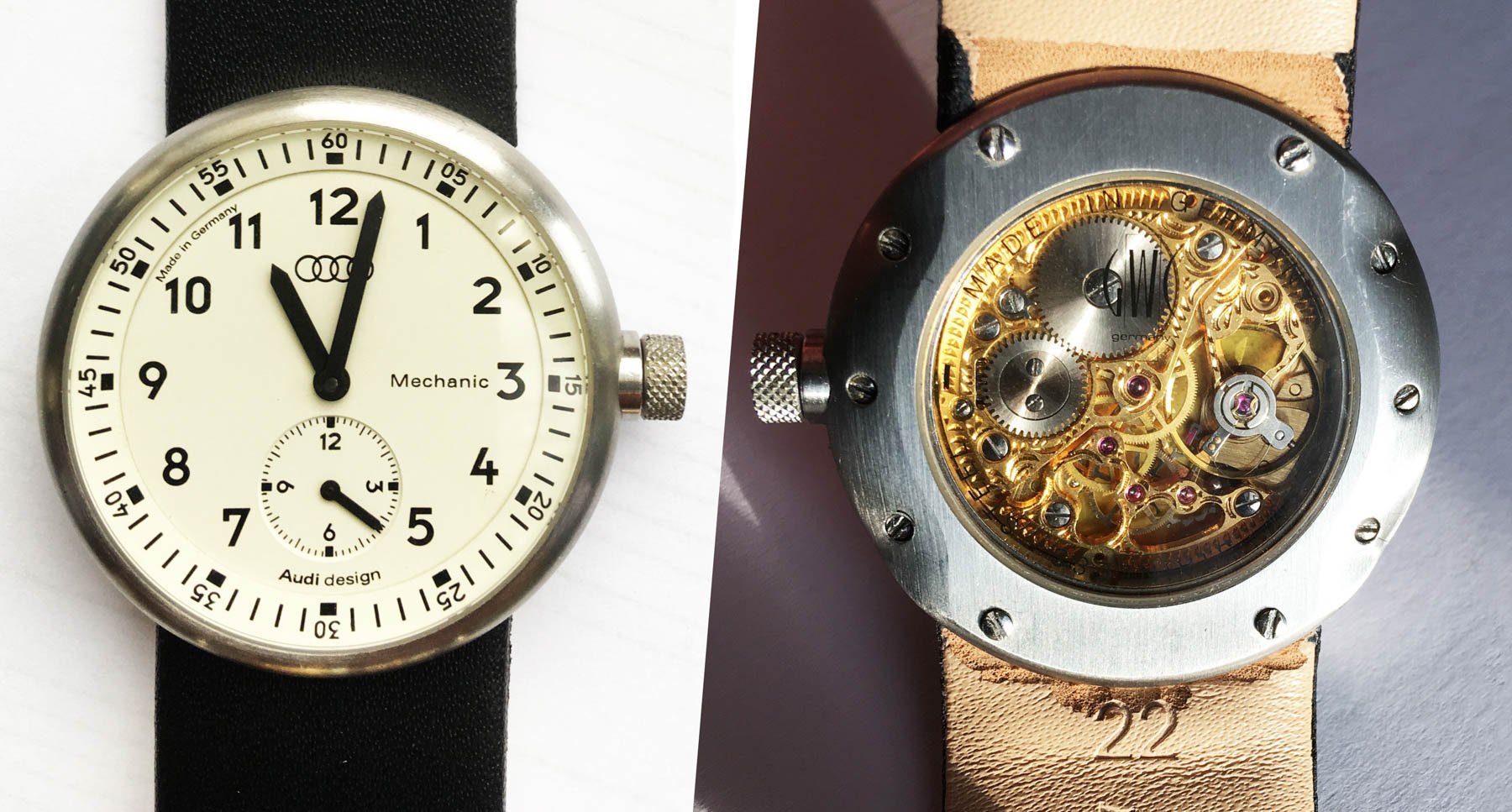 One of them is a watch that has almost the same design, but it’s powered by a manual German-made beautiful GWC skeleton movement. “GWC, short for German Watch Center was the original Audi watch producers, but they are no longer in business. When I bought this watch, it was not working due to a tiny spring that came loose. I hunted down the company that bought the original GWC and sent the watch off to them. They had a spare part and it now works great. These were part of a series similar to the white one you have, this one is simply a mechanical one,” Chris adds.

From his endless portfolio including different designs, case shapes, and complications I decided to choose some Audi watches that I would happily strap on, no matter the quartz caliber. It will help you to understand the variety and exotic nature of Chris’s collection.

The first one that spoke to me was a simple watch with a pearlesque dial and quite big and tightly fit holes around the dial. They are numbered 1–31 to show the date thanks to the red dot that looks at you from one of the holes. The only other red detail is the very old Audi logo that I always liked. “This was not an Audi collection watch, rather just an off-brand unique kick. I bought it from someone that bought it in Paris, not sure where it was made,” says Chris. 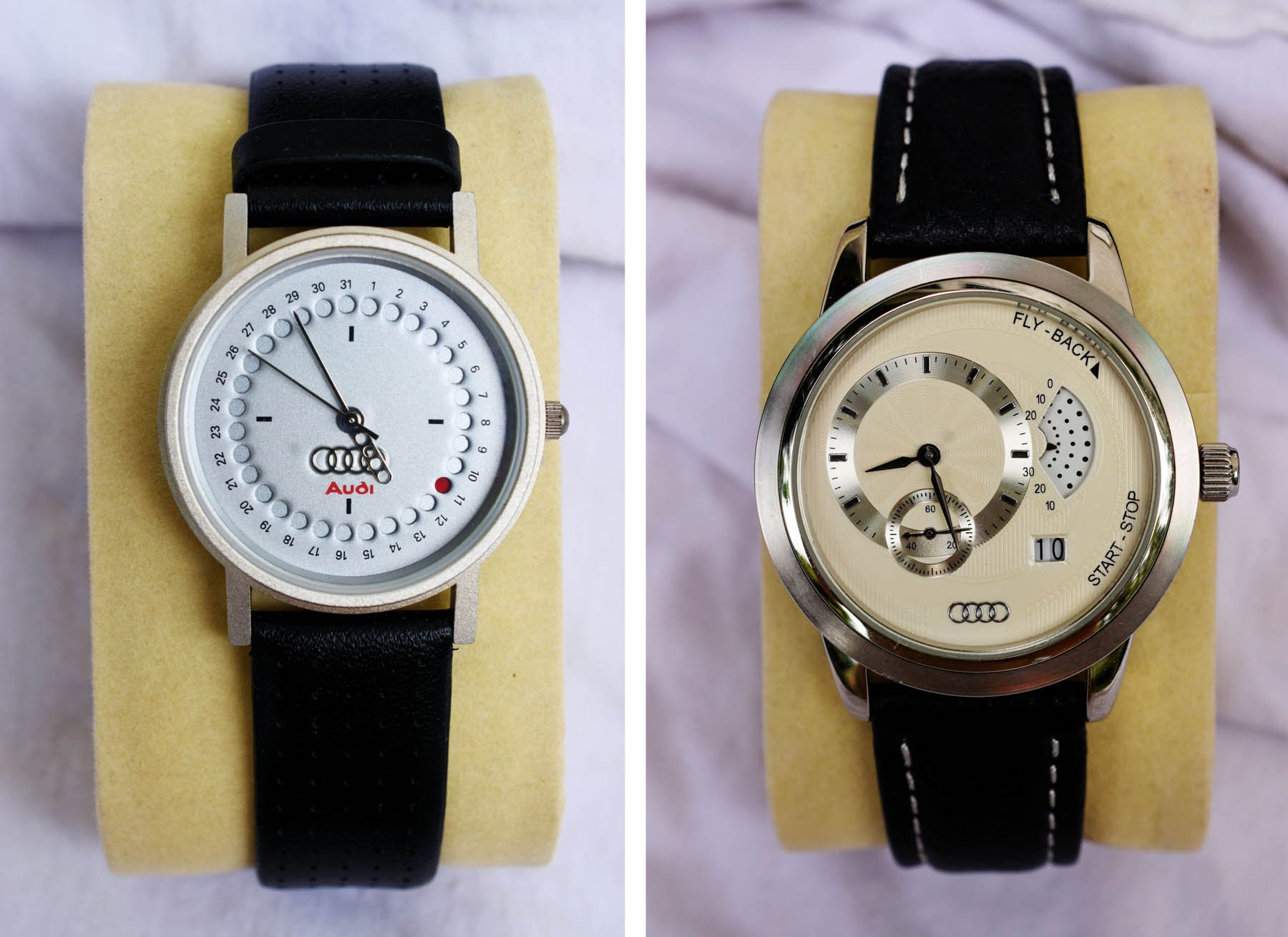 I was attracted by the unusual chronograph counter designed as an arc on the right side from the smaller time dial. “This is a watch that is supposed to mimic the PanoGraph that Glashütte originally put out,” says Chris who bought it because of its looks. The date is much smaller and the pushers are missing completely, so it won’t be the most high-end watch in his collection. Quirky enough though! 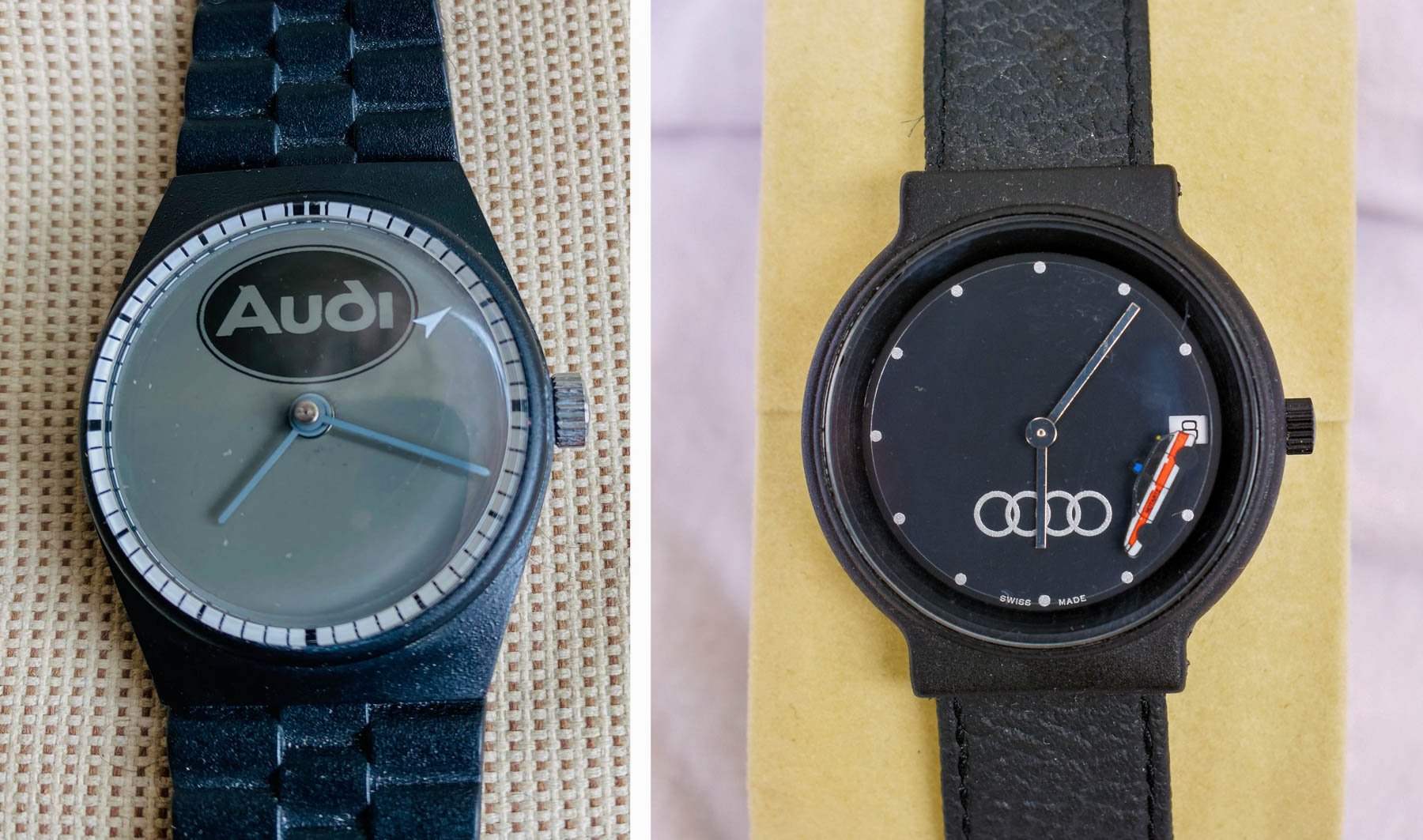 Do you remember Wrigley’s Ghost Dial watch I featured on #TBT a few years ago? Well, I was so happy to see the same dial idea again designed with an ultimate “Make the logo bigger” strategy (or tragedy). Chris found it very recently in the US, but he hasn‘t opened the back yet. Looking at the minute track and the style of the floating arrow for that shot second, I would not be surprised if Chris would discover a Buler movement inside.

Another black mamba with floating seconds reminds me of another crazy watch in my collection, the beloved Timex Heinz. This time, the ketchup bottle was changed for an Audi police car. And this time it’s Swiss, not German made. “I have no idea, why that is. Sometimes watches were made simply for a special organization or event,” Chris elaborates, unsure about the watch origins. 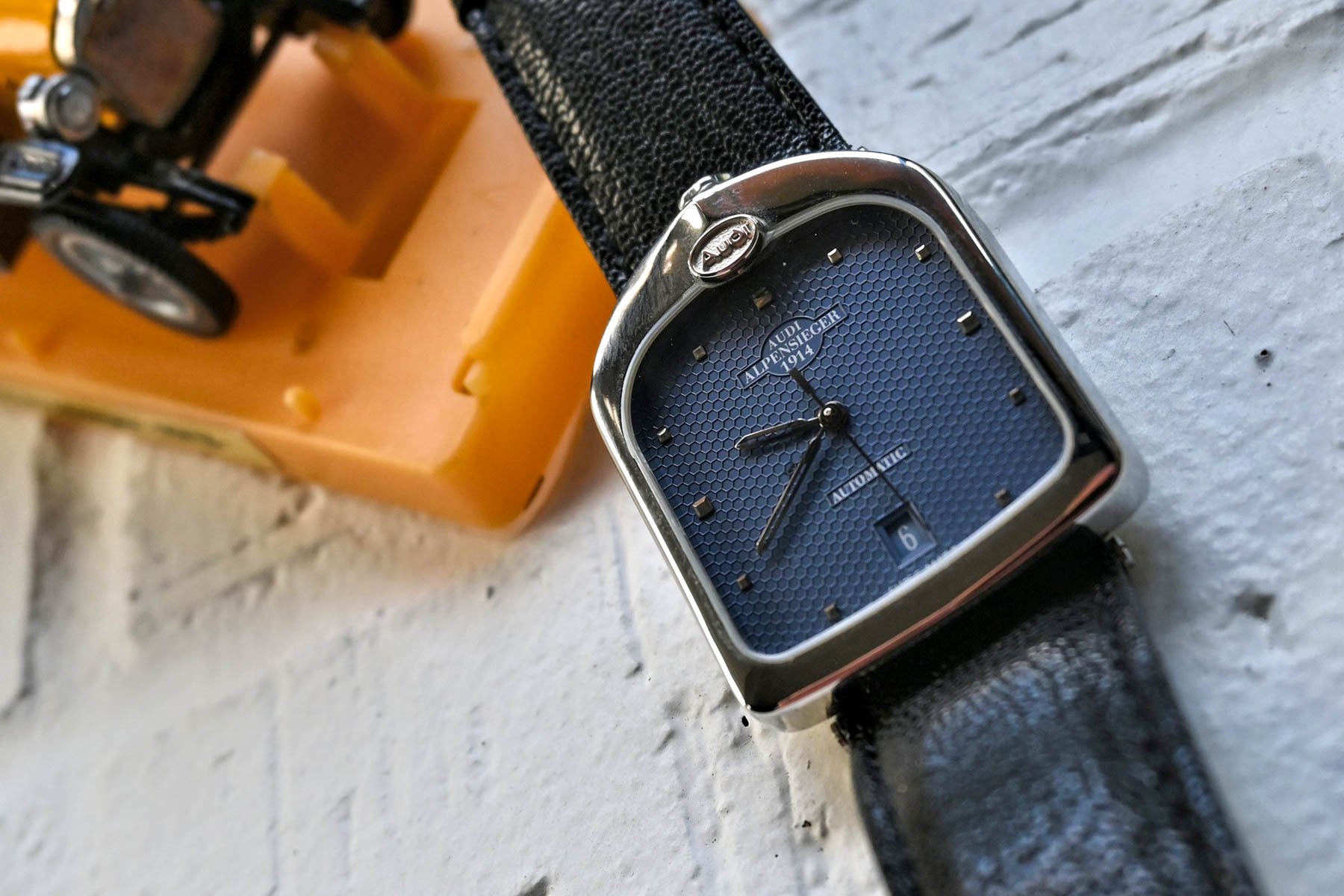 Quite a special watch that reminds me of the sought-after Mido “Radiator” watch from the 1930s. Chris loves the watch and he has an interesting story to tell. “It’s a very rare limited edition with a fine automatic movement. The radiator mimics the 1914 AlpenSieger Audi car, which won a lot of early mountain races. I bought it from a German Audi mechanic that is now retired. It was gifted to him from some upper Audi boss.” 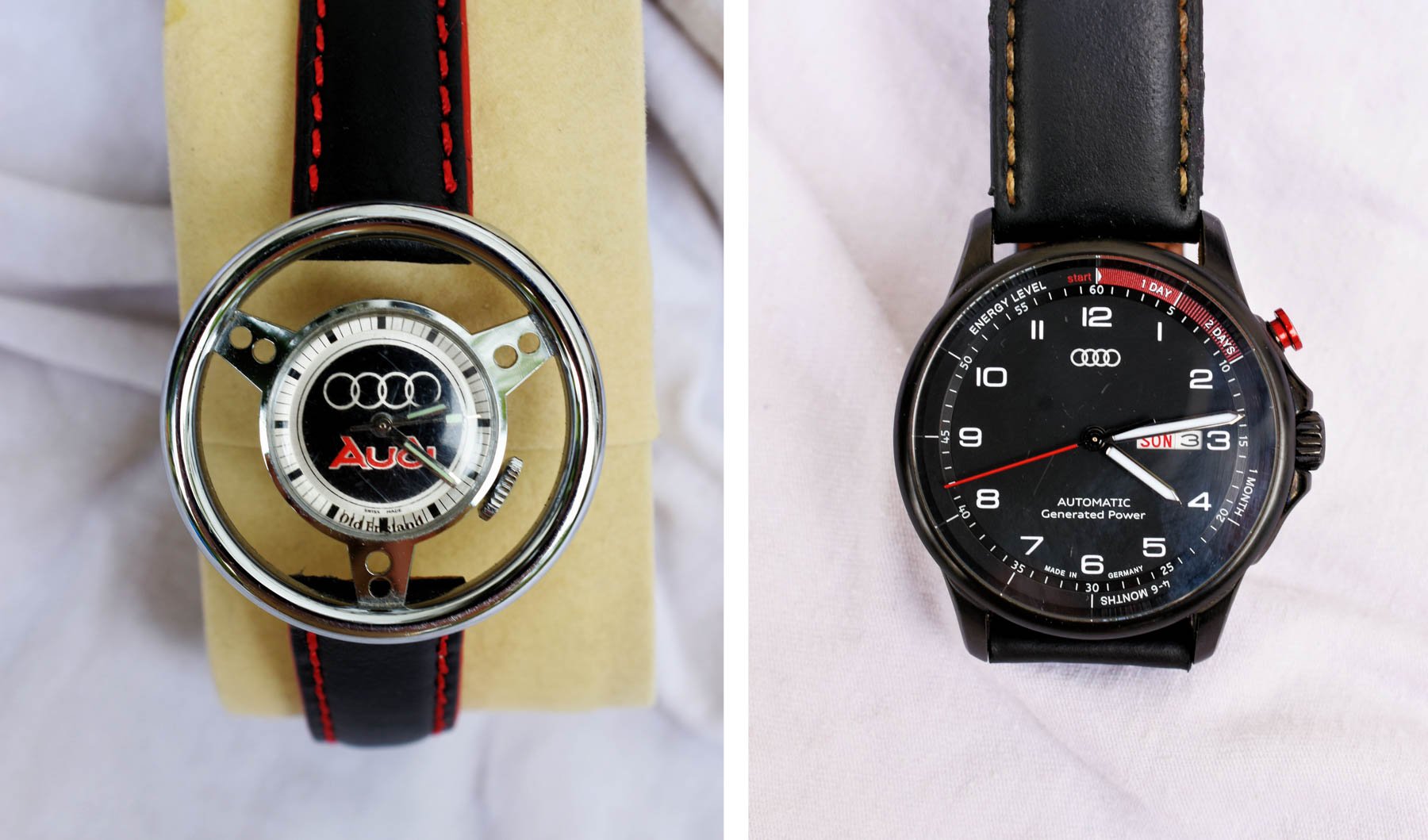 From the small number of watches that Chris has sold, there is one he regrets the most. “This Audi watch is super difficult to find. ‘Old England’ was a company that made steering wheel watches for many many car brands. Everything from Ford, BMW, Fiat… as many car brands you can think of. They were from the 1960s. It’s not easy to find them still in original condition.” If you decide to go after one, don’t forget fakes won‘t have the “Old England” name at the bottom of the dial.

When I asked which watch gets most of the wrist time, Chris instantly showed me an elegant sporty three-hander with a day/date movement. When you hit the red side button, the red second hand will move around and stop at a spot that then tells you how much power reserve is left. “I can wear this watch for a few days and it will charge itself for months,” Chris explains how to read the dial. These watches were part of the Audi Collection and possibly came out when Audi was first getting into the whole battery/electric car sector.

Big thanks to Chris for reaching out and showing us something we don’t see every day. If you have some precious pieces in your collection you would like to show and talk about a bit, reach out to me at [email protected] and we might feature them as well.

Which Audi watch would you go for?

Hot Topics
Introducing: The Omega Speedmaster Super Racing With Spirate System
159 comments
Design Vs. Specs — Which Is More Important To You When Buying A Watch?
86 comments
The Time To Buy Is Now: How The Current Economic Climate Influences Watch Buying And How You Should React
51 comments
Introducing: The New Cartier Tank Française
49 comments
A Regret-Free Guide To Buying Your First Luxury Watch — Part Three: Higher-End Options From Omega, Rolex, Grand Seiko, And More
48 comments
Popular
A Question From A Reader: “Which Modern Speedmaster Is Closest To The Original Moonwatch?”
Robert-Jan Broer
14
Top 10 Rolex Watches – Overview of Models Favoured By Our Readers
Fratello
25
You Asked Us: Nomos Orion as a dress watch?
Gerard Nijenbrinks
10