I read about this “complication” a few years ago, but never stumbled upon it. Until last summer, when I accidentally found a Buler in a Royal Oak-styled case.

It’s early 2020 and most of us are refusing to accept the fact that Christmas is over. So I thought I might take it easy on you and offer a bit of vintage fun. To cheer you up before getting ready to dive back into your daily job routines. Flipping through my archive, I stumbled upon a really unique mechanical piece. It’s not the movement, it’s the idea again that amused me so much. Twice a minute, or 120 times in an hour, the dial is visible for a few seconds only, otherwise clouded in darkness. Maybe it’s too daring call it a complication, but you get the point of an unusual feature on a mechanical timepiece. 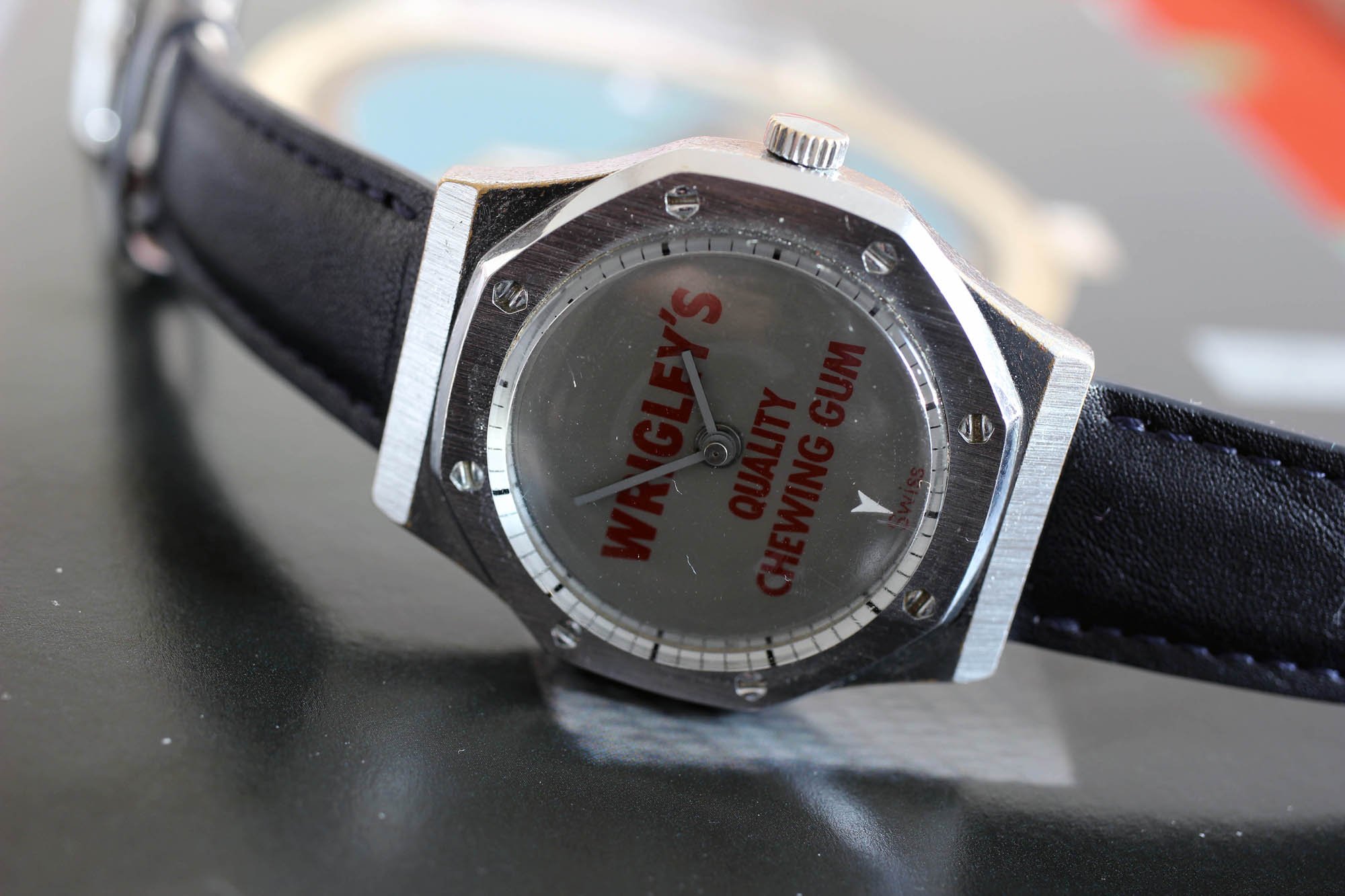 Christian Pfeiffer-Belli is a well-known German watch author and journalist. For many years he has worked as an editor of journals such as Klassik Uhren. He published about 50 books on all kinds of watches. In one of his books called ‘365 Klassische Armbanduhren’, I saw a picture of a watch with a naked woman printed across the entire dial. I assumed there has to be more to it than the naked woman to make it into his book. I started digging and for the first time learned about the dial that hides behind two polarizers. Happy that I understood the concept, but unhappy about the idea of wearing a naked girl on my wrist, I dropped the idea of the watch at that same moment. 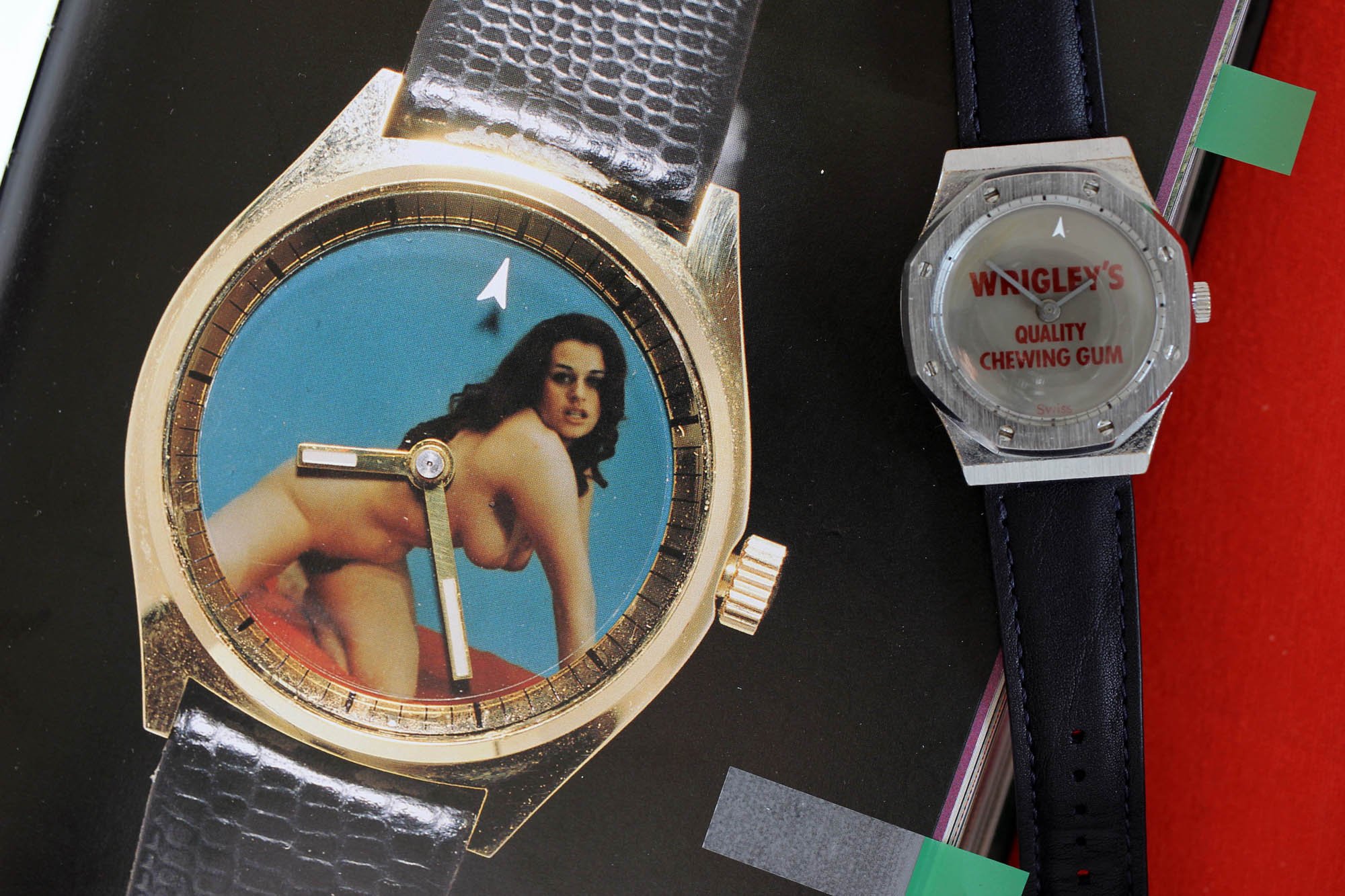 ‘The naked one. How cool! I want that one!’ Without waiting for my response my badass wife left the room 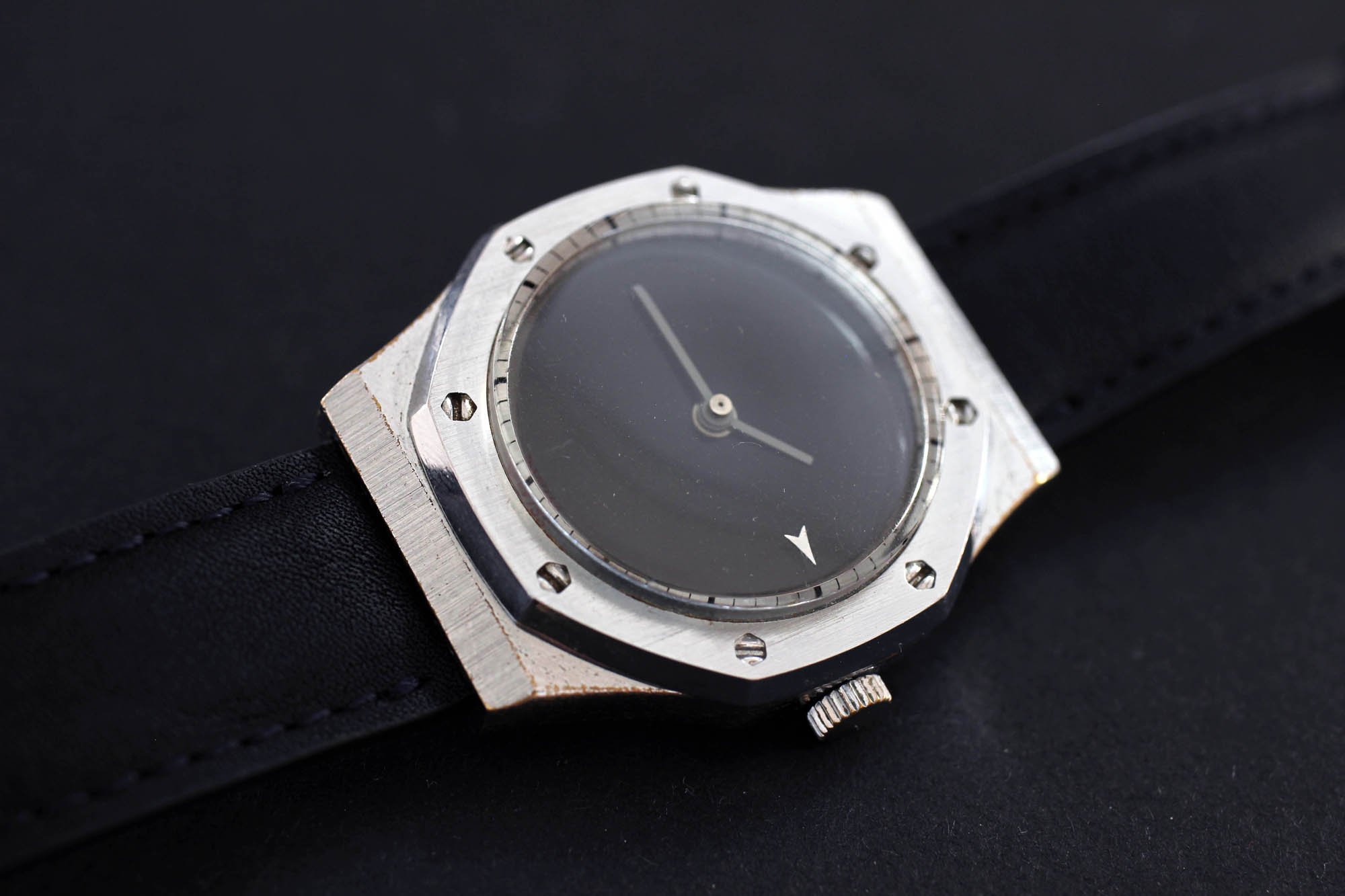 Guess what I did the second the watch arrived. I took it to my friend and watchmaker Tomas to disassemble it. I gave him the watch and he gave me that “You have to be kidding me” look. With a bit of hesitation, he pulled the movement out so we could see what lies beneath. Notice that while Pfeiffer-Belli’s book and the last auction featured an EB 8810 movement, I got a bit of an improvement. Well, did I say a bit? With two jewels we’re talking 100% improvement. A painful joke, I know, but the watch does what it needs to do. The movement and the case back carry the Buler Watch Ltd name that you might remember from a recent #TBT about an addictive GMT with four time zones. 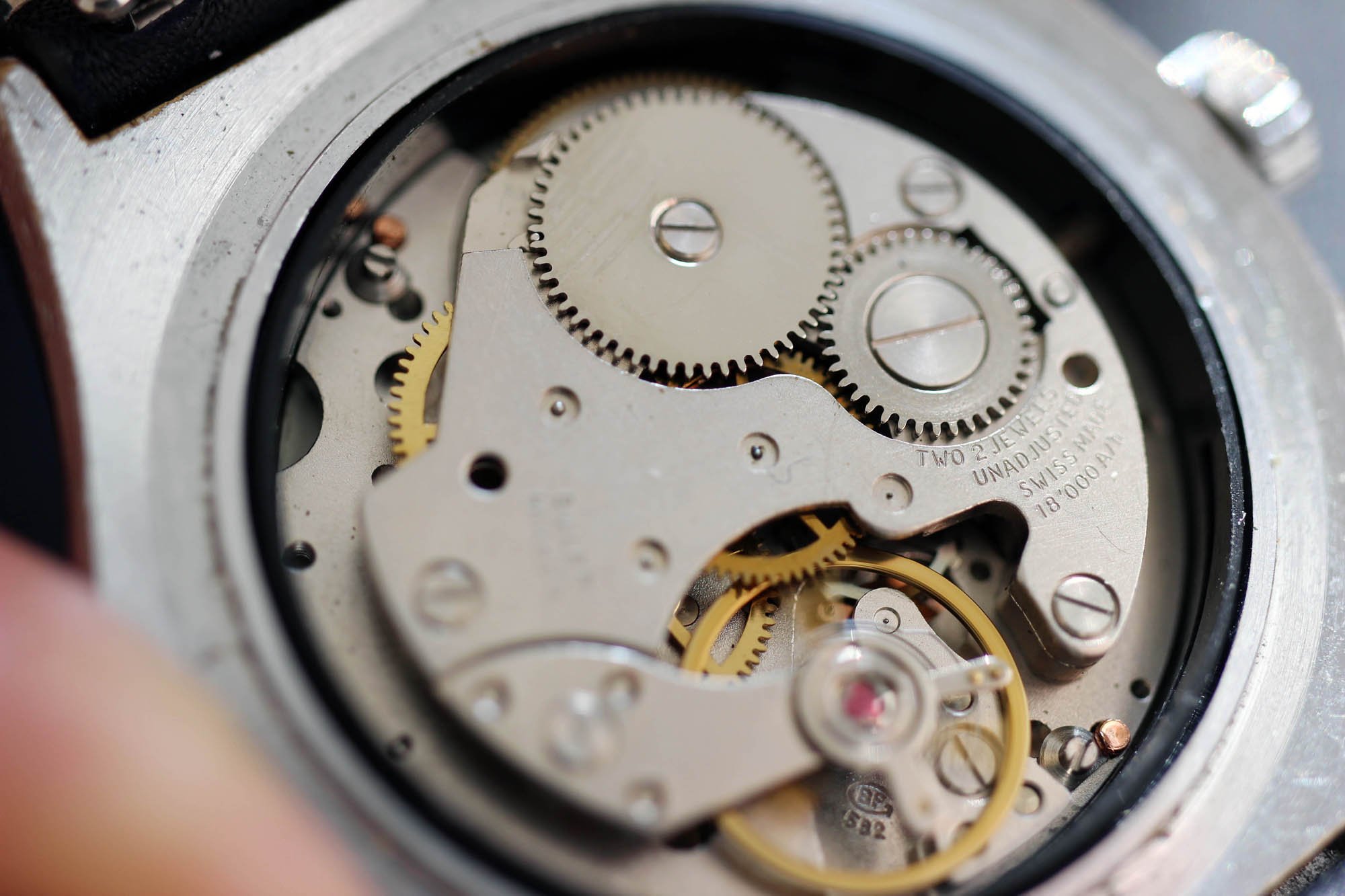 A closer inspection of the movement reveals the BFG 582 marking, making it a Baumgartner 582 movement. The delicate part came shortly after when we released the movement from the case and stripped off the second-hand polarizer. If you manage to land this watch and decide to have it serviced, be careful when removing the seconds disc. The standard second hand is easy to take off, as you can access it easily. But since the polarizer spans all over the dial, you have to stick a long thin tool to the center to prevent damage. As these watches might be from the seventies or eighties, a gentle touch is essential when manipulating with polarizers. 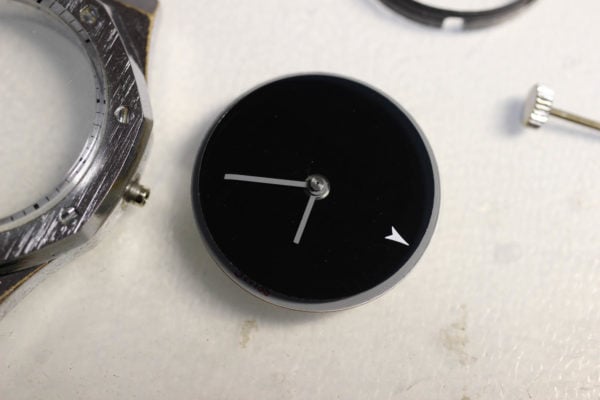 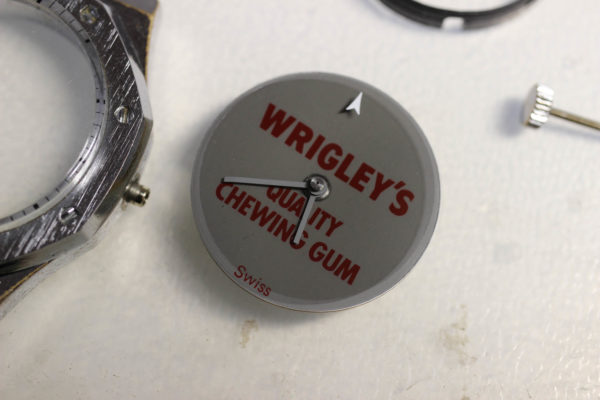 The picture above explains it all. Red lettering printed over the white dial with the bottom polarizer firmly riveted to it in the center. On top of the hand and the minute hand, there is another polarizer that is attached to the center and is moving as a second hand. Picture it as two filter grids rolling against each other. If the top filter grid is aligned with the bottom one, it allows light to get through, so you can see the image placed underneath. When the above grid is perpendicular to the one below, no light comes through and you just see a dark surface. You can see how it works on the video below.

The Buler company was founded in 1945. After nine years, the founders Charles and Albert Buhler left the business, but the company managed to flourish without them. In the late fifties, production exceeded over one million Swiss watches that were distributed to 65 countries over the world. According to the Buler website, Buler was one of the leading mass producers of lower quality pin-lever-watches at that time. 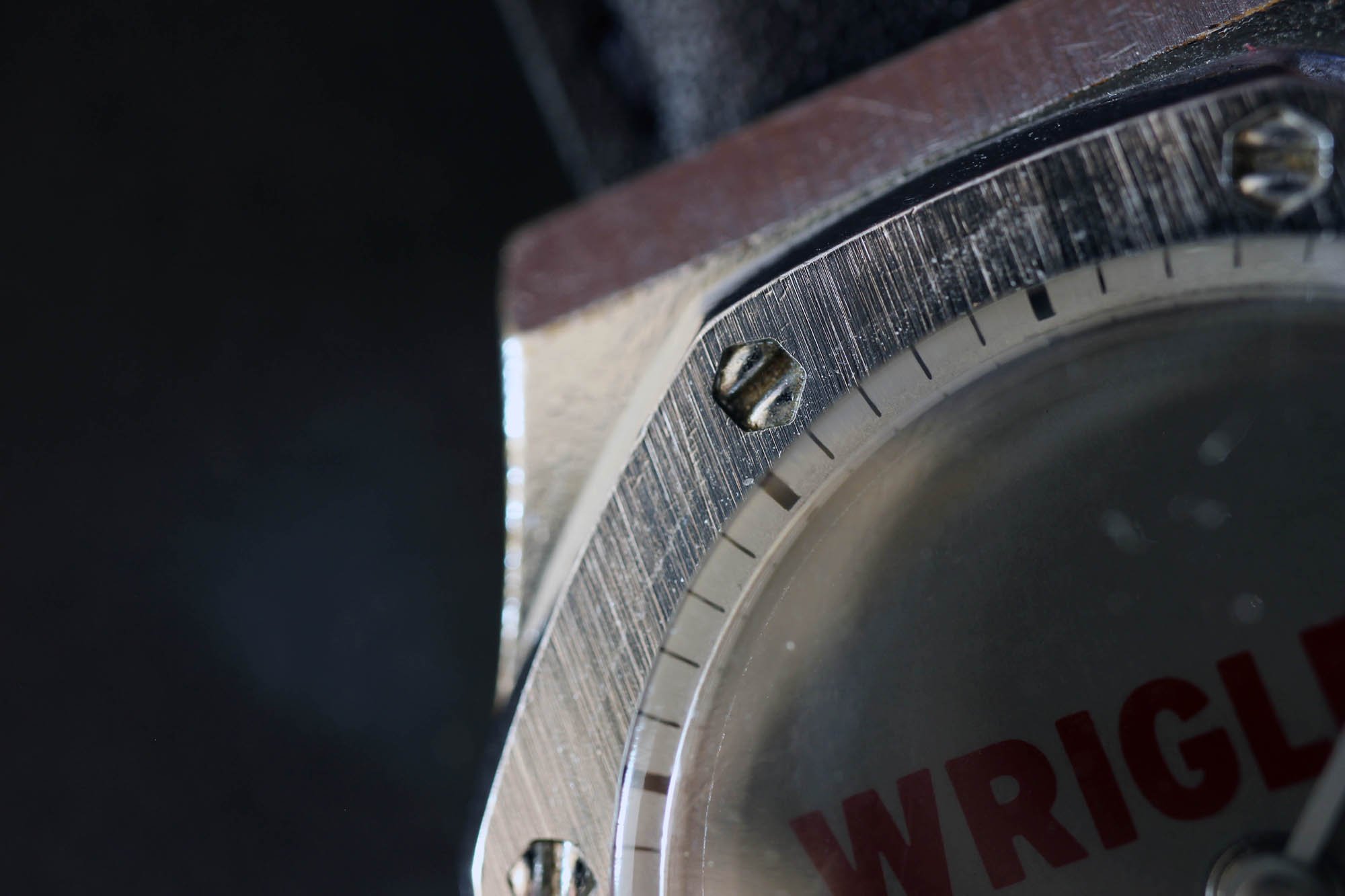 It is difficult to exactly date the Wrigley’s watch, but my estimate would place it in the late 1970s. The base model for Wrigley’s mystery dial version is clear. Buler Astromaster doesn’t pretend to be anything else than it actually is – the poor man’s alternative of Audemars Piguet’s Royal Oak. Buler just did some trick to do dial and the result is a completely new promotional watch. It was probably either a gift to employees or customers. But I’m sure that I haven’t seen a second example up till now. 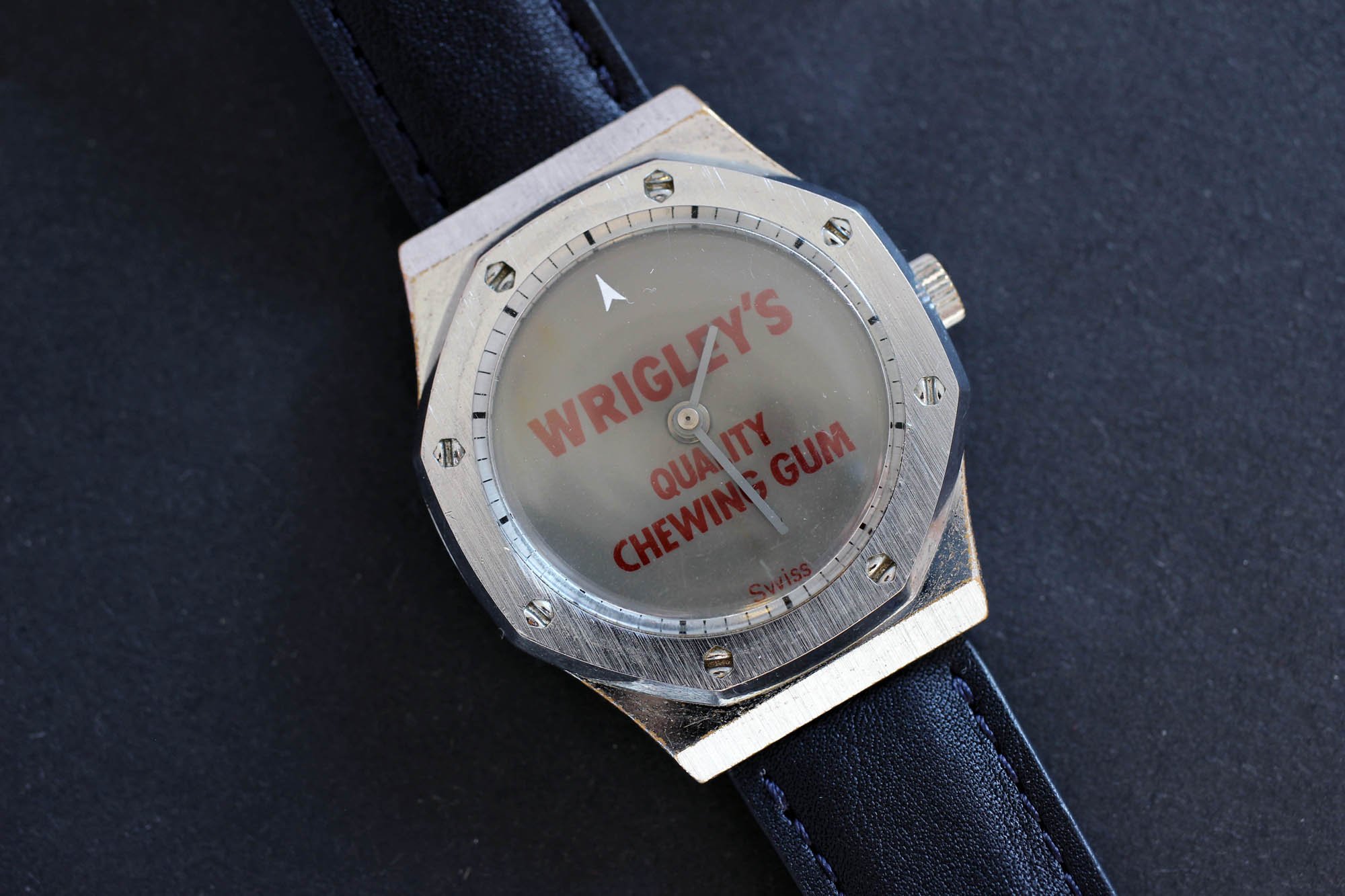 The finishing quality equals the price of this Royal Oak copy. The watch looks great on a black leather strap, especially when the dial turns full black. That always happens between the 15th-20thsecond and the 45th-50thsecond. Polarizers always eat some light, even when aligned, so the Wrigley’s branding at the zero position or 30thsecond is still a bit foggy. As a former copywriter, the watch reminds me of funny days and nights spent in an advertising agency. 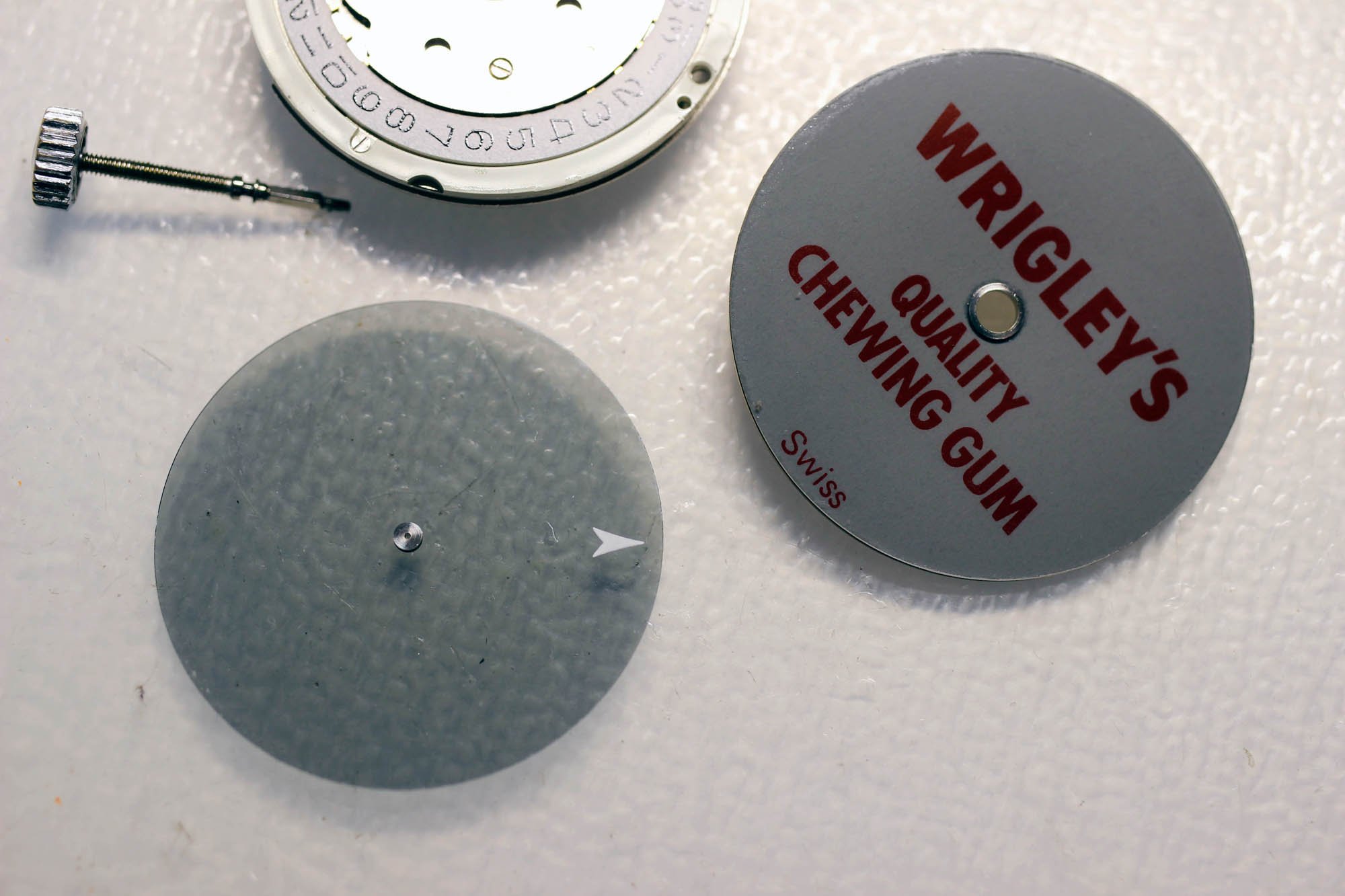 Who is it for?

While writing this piece on the Buler Wrigley’s, my wife came in and saw it sitting on the open Pfeiffer-Belli’s book. ‘What a watch!’ my wife said. Excited that she likes it, I hand her the Wrigley’s watch to take a closer look. She looked confused, didn’t take the watch and nods towards the open book behind. ‘The naked one. How cool! I want that one!’ Without waiting for my response my badass wife left the room. Well, either the erotic one, the Wrigley’s or any other type you can find online, I am pretty sure it will make for a great refreshment of your vintage watch collection. Happy hunting. 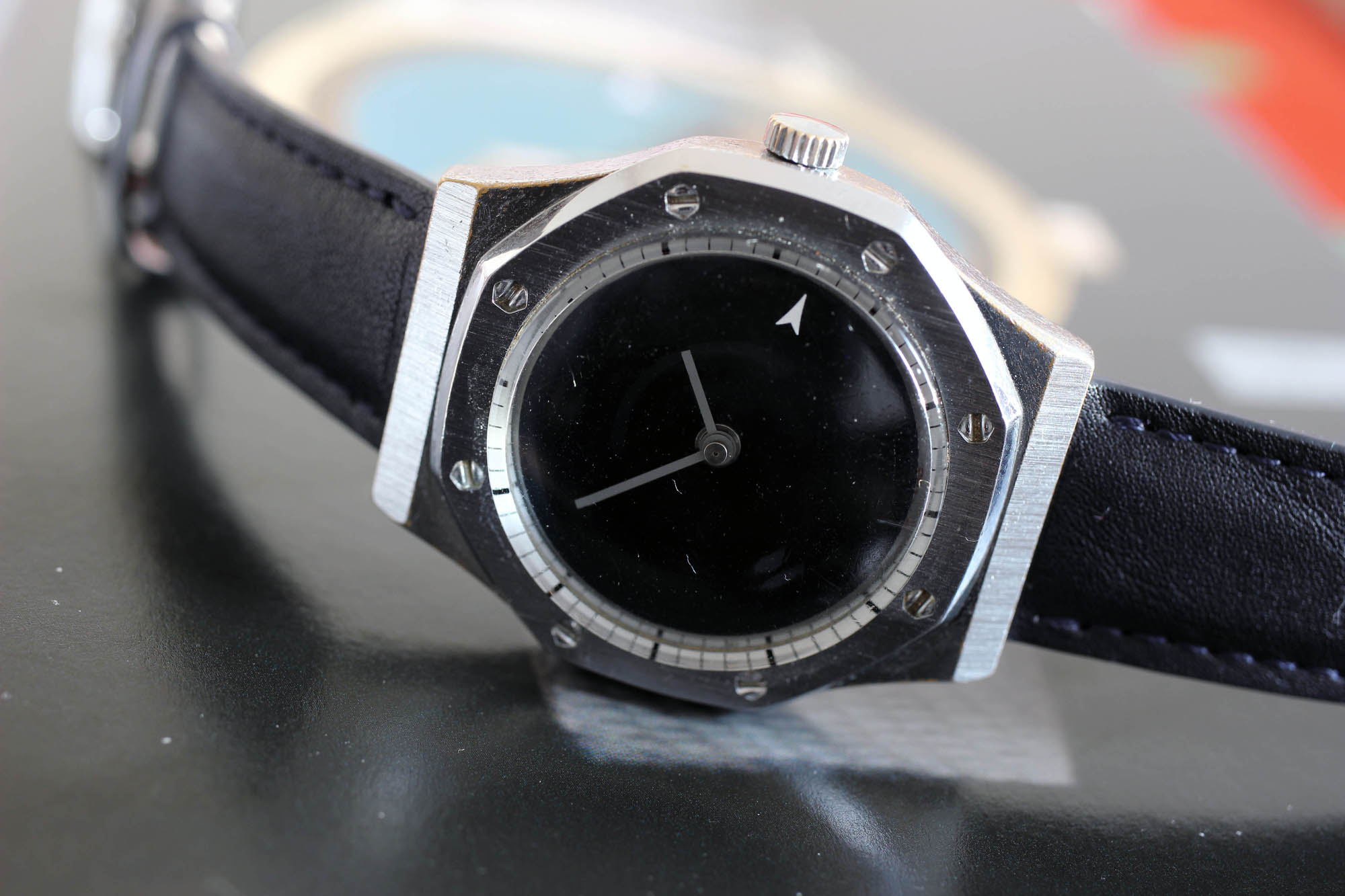 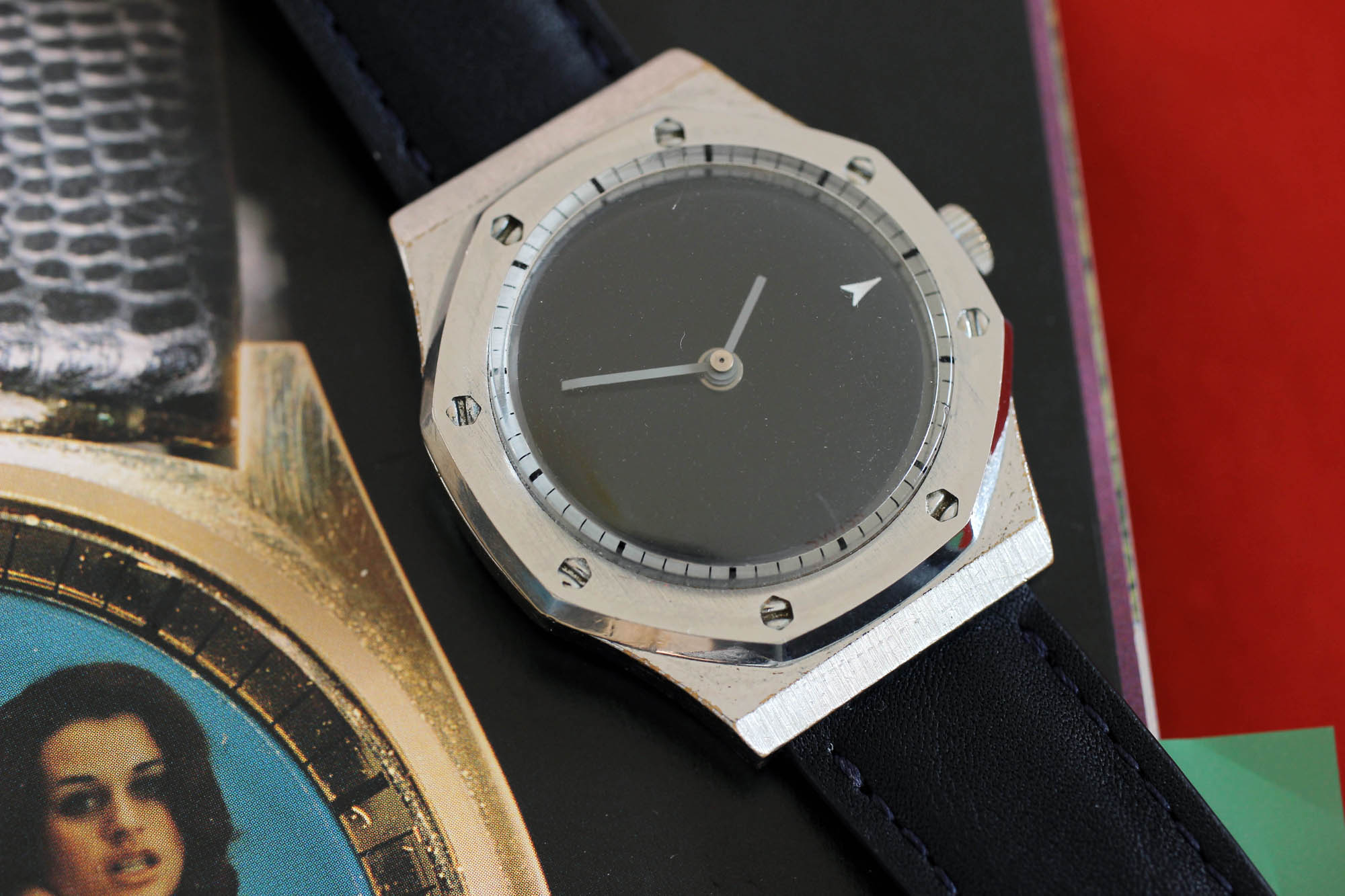 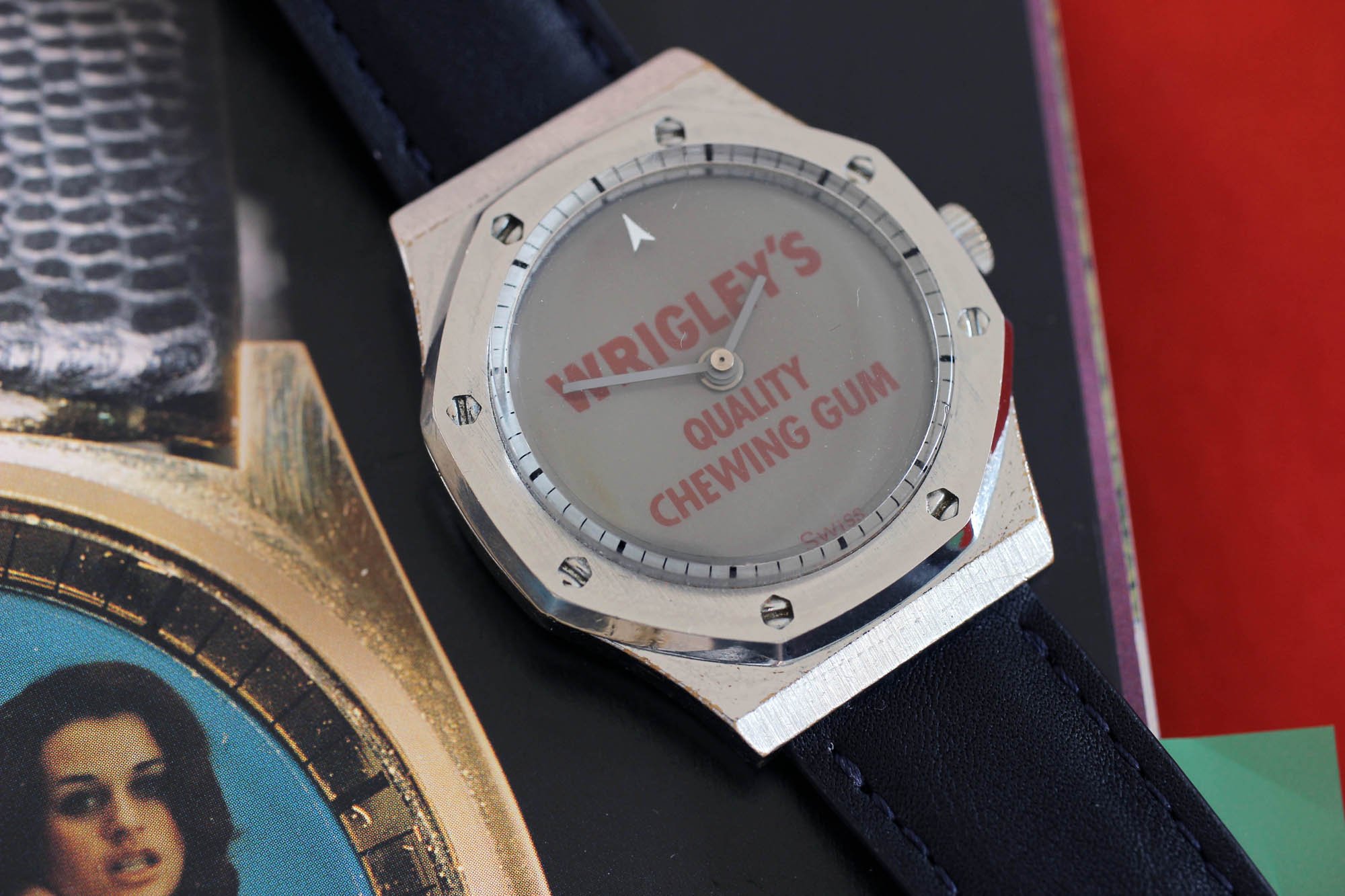 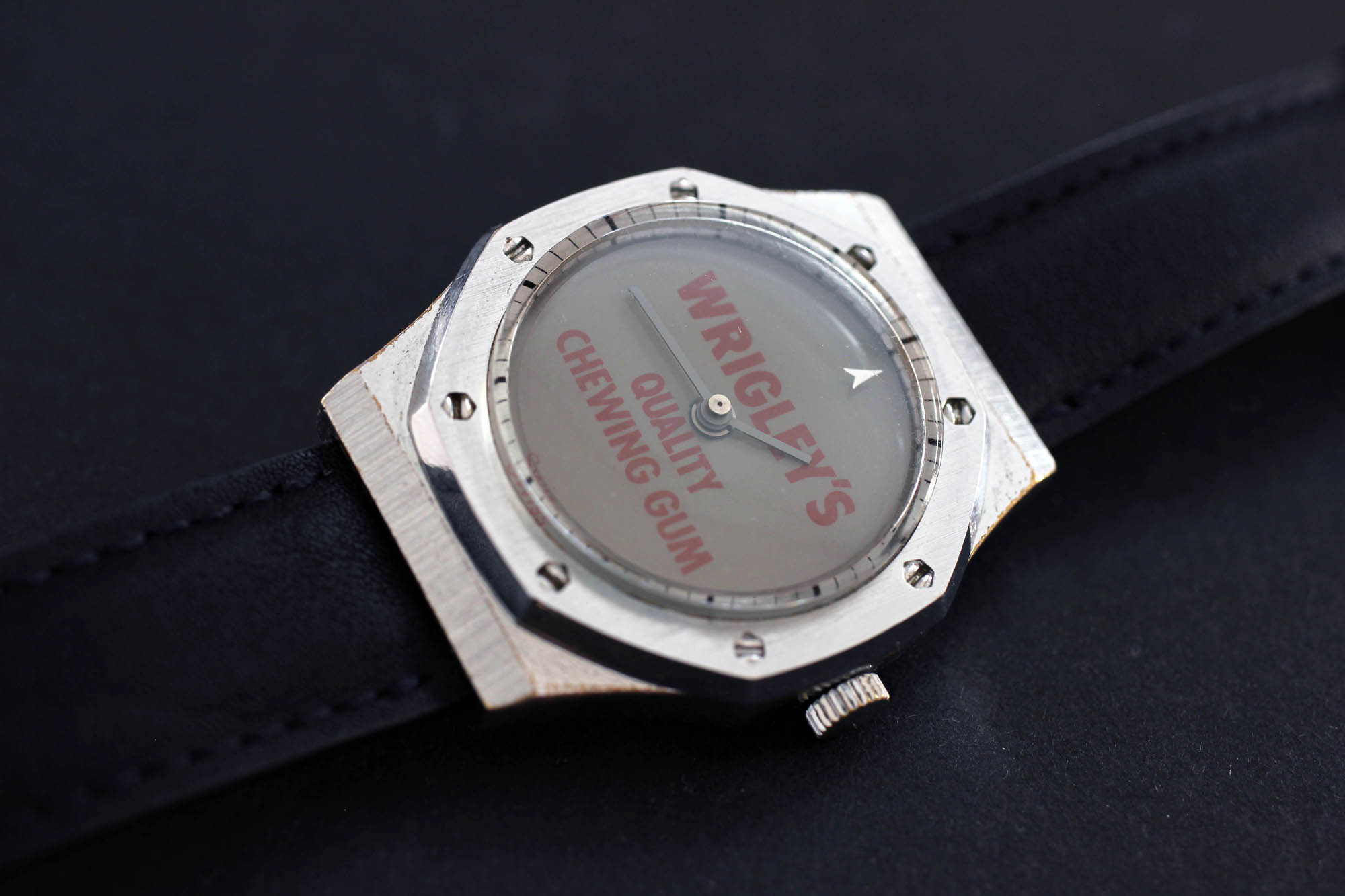 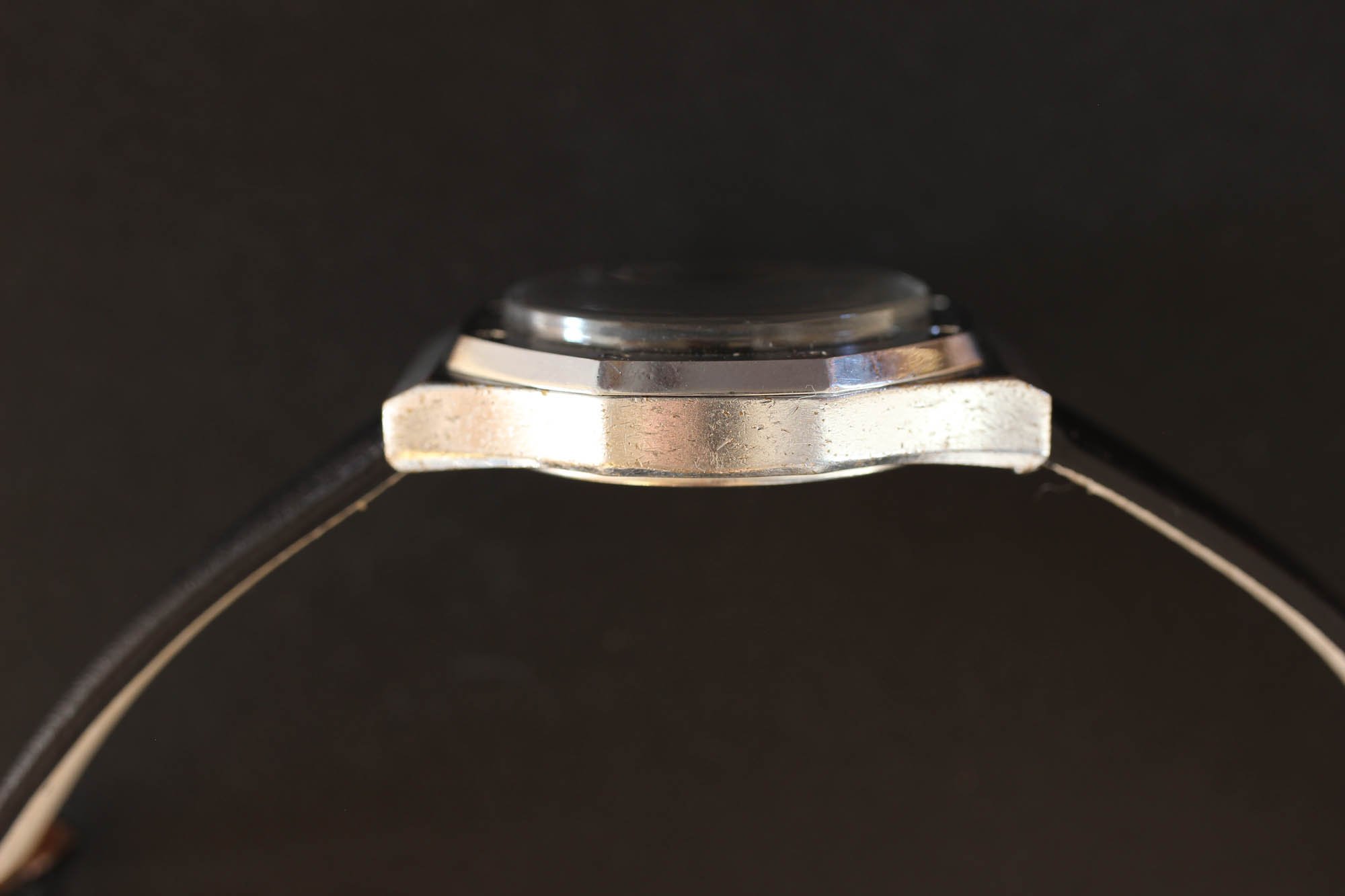 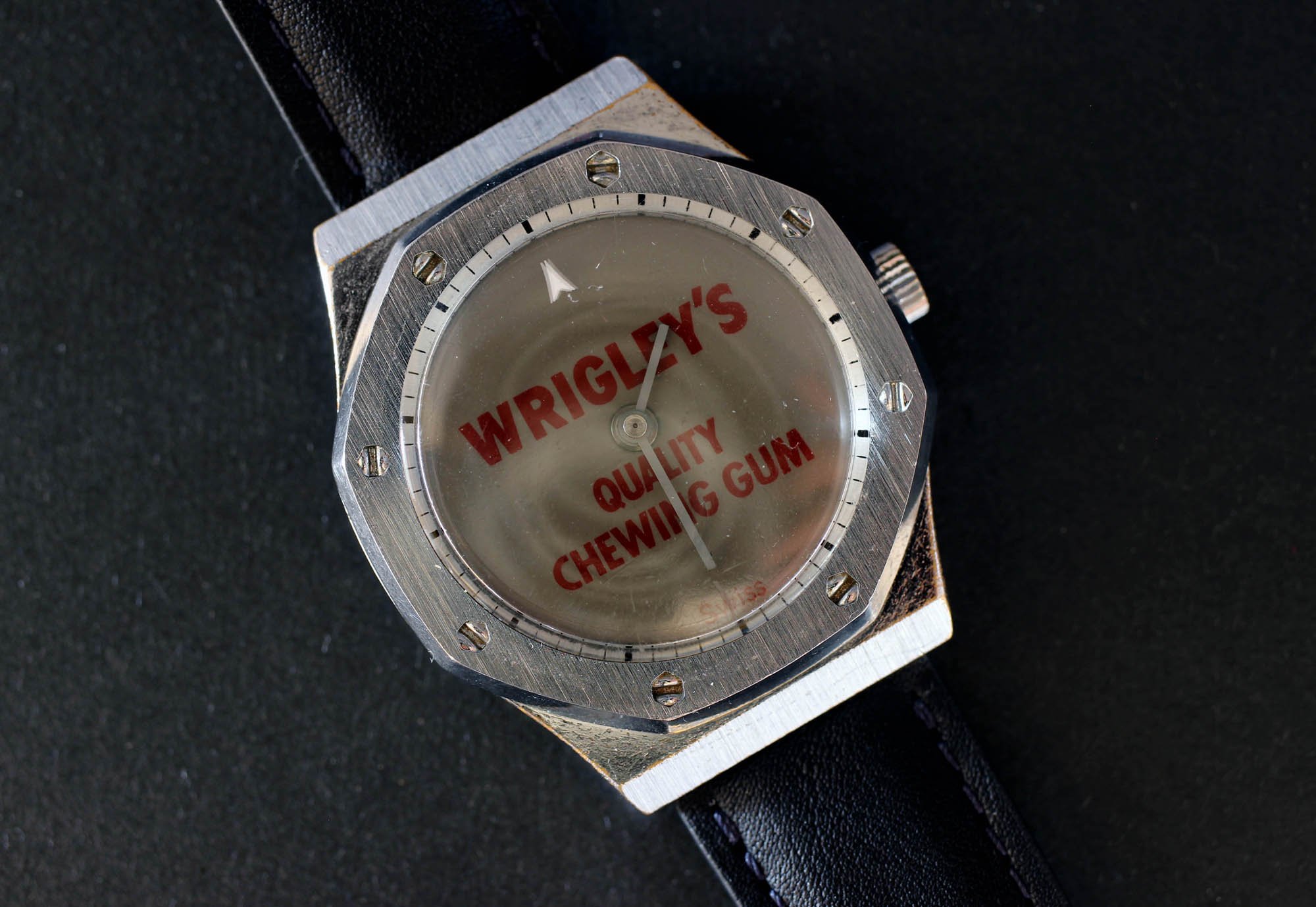 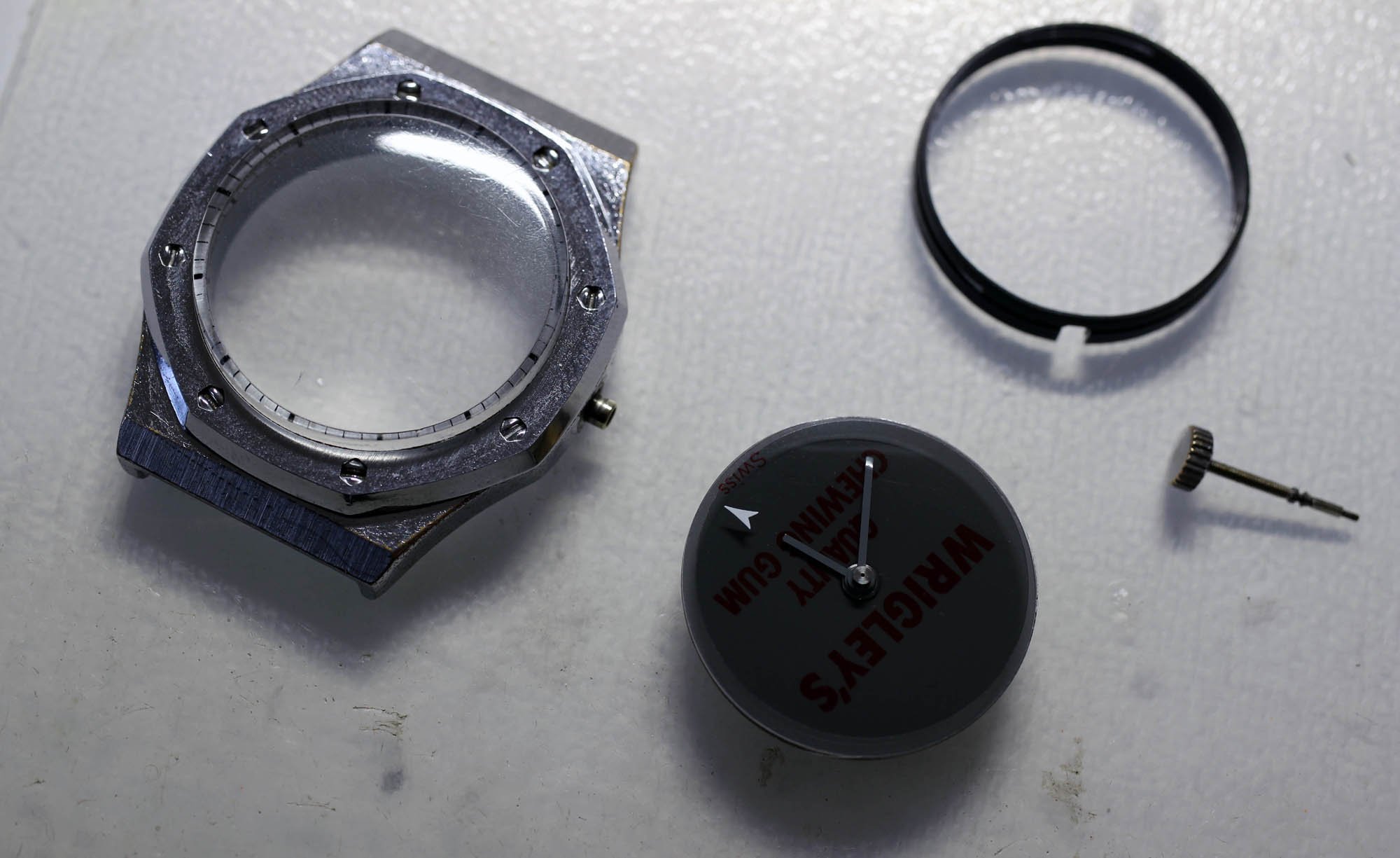 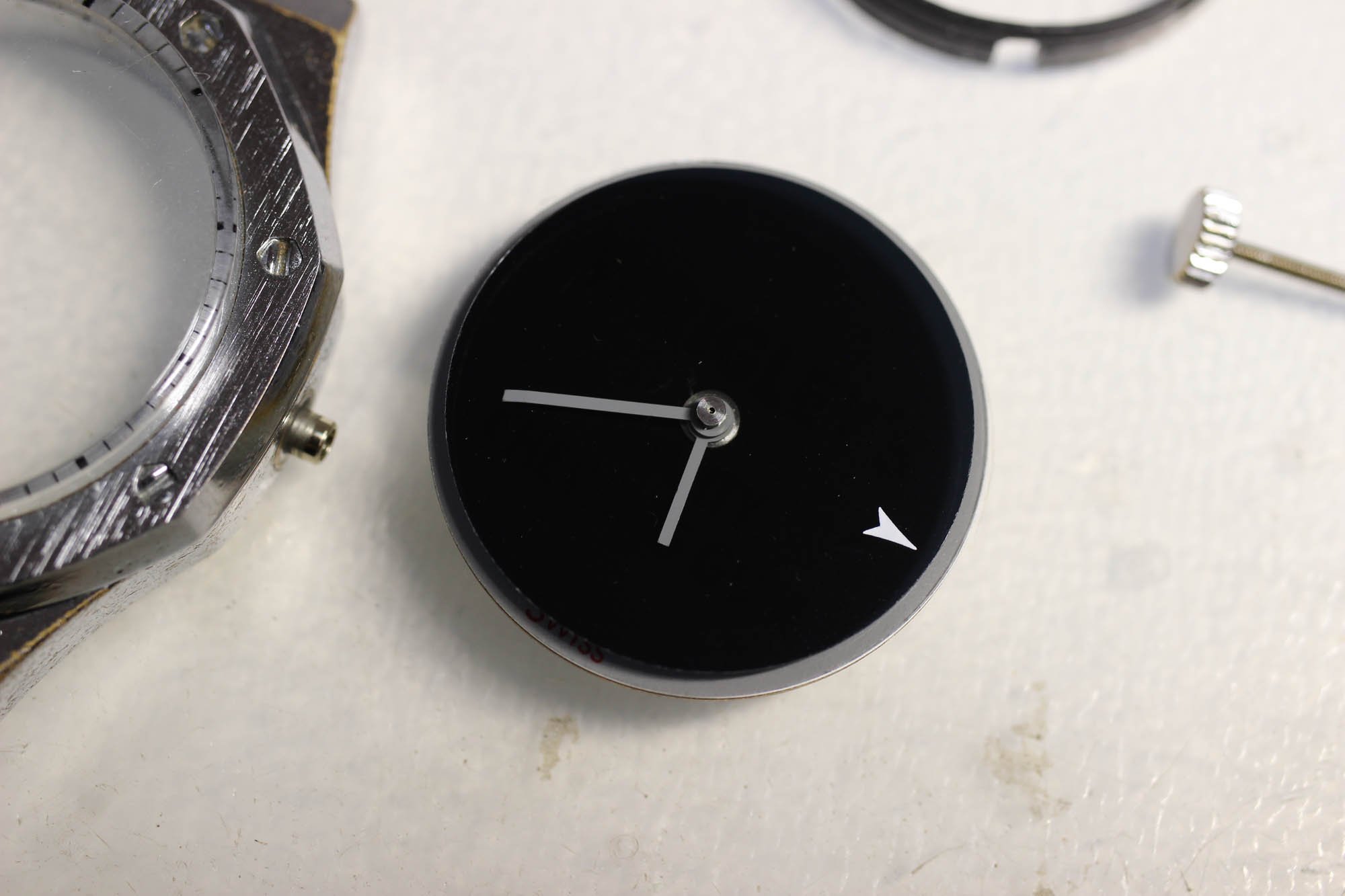 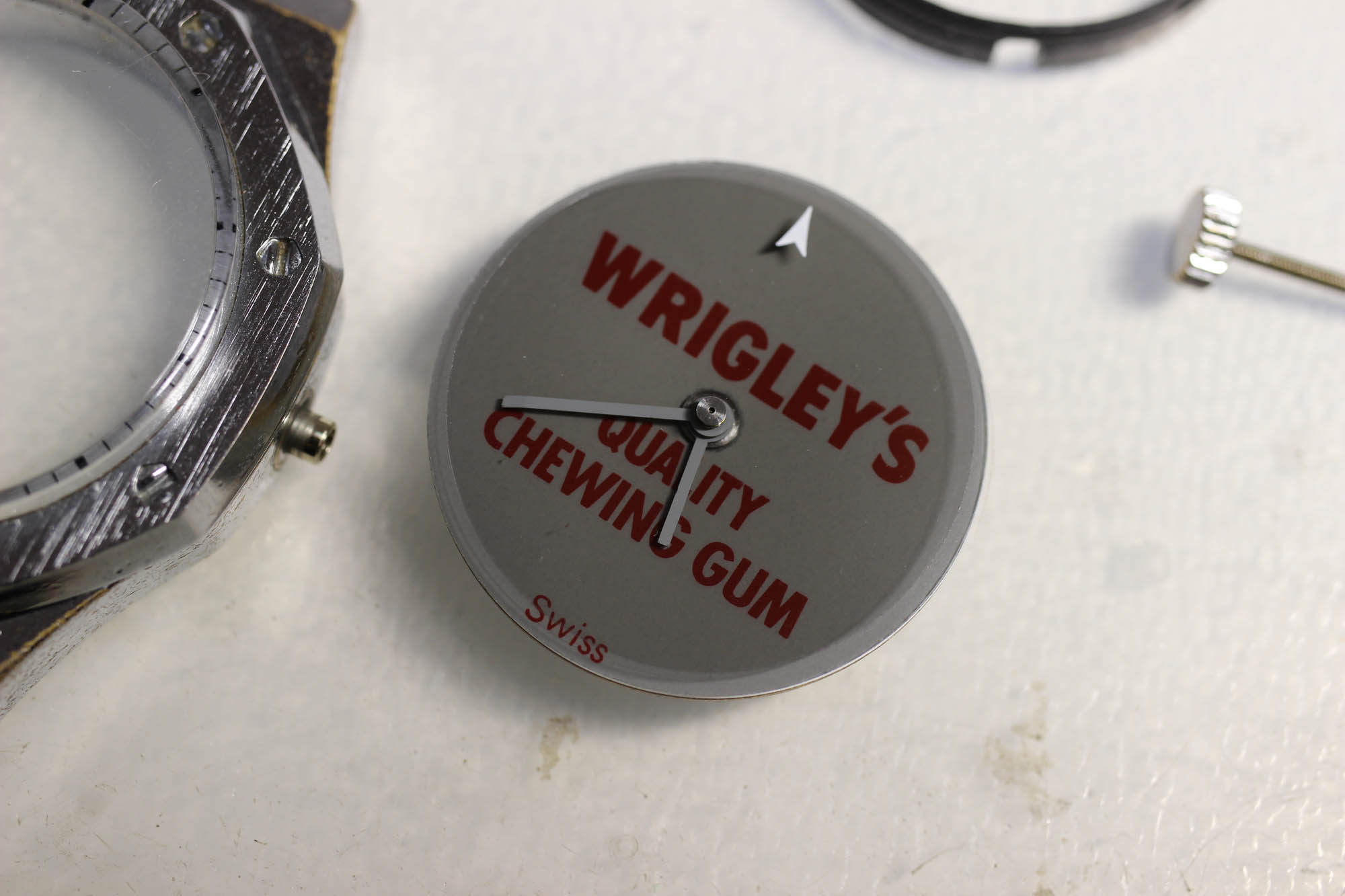 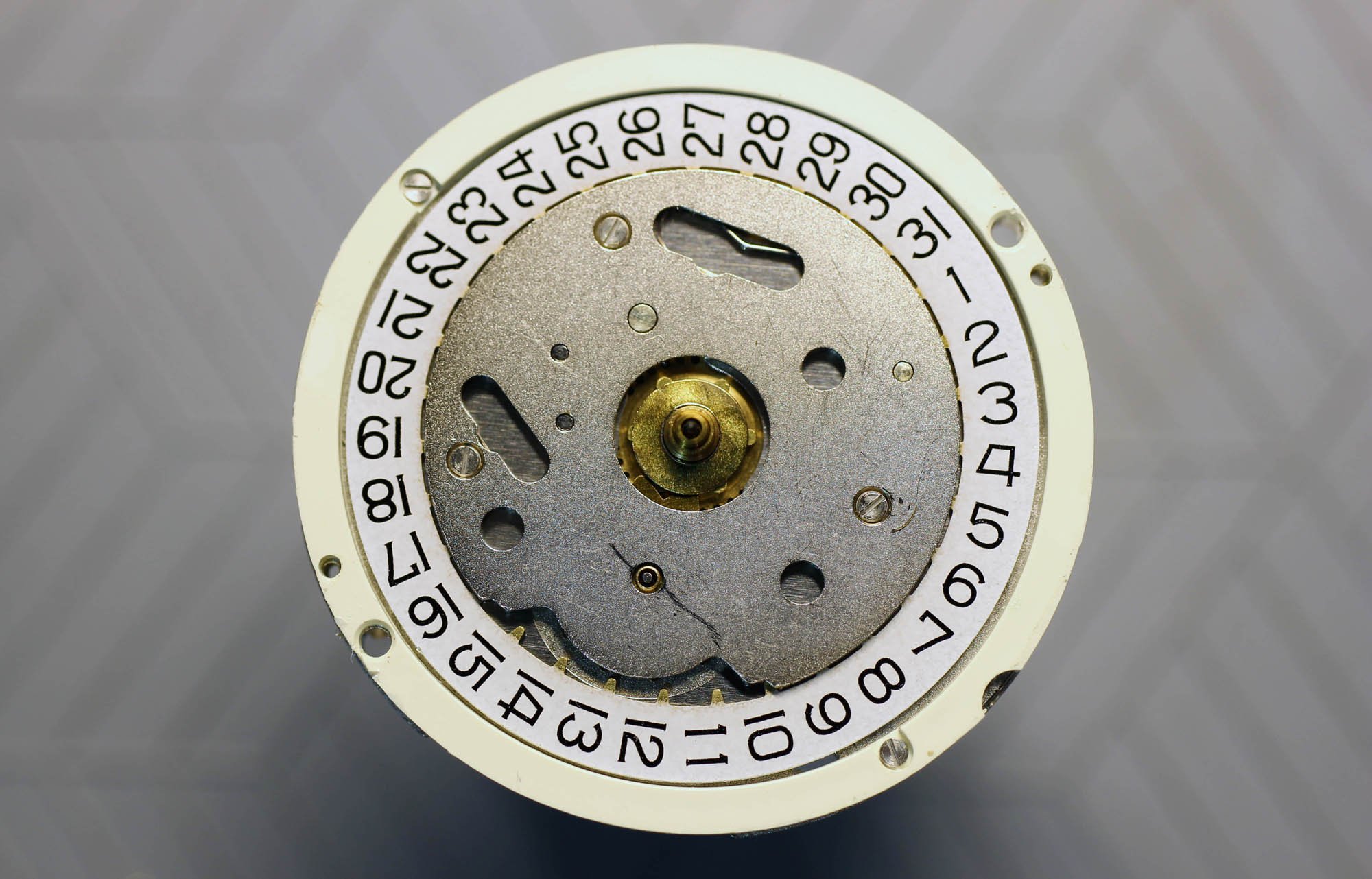 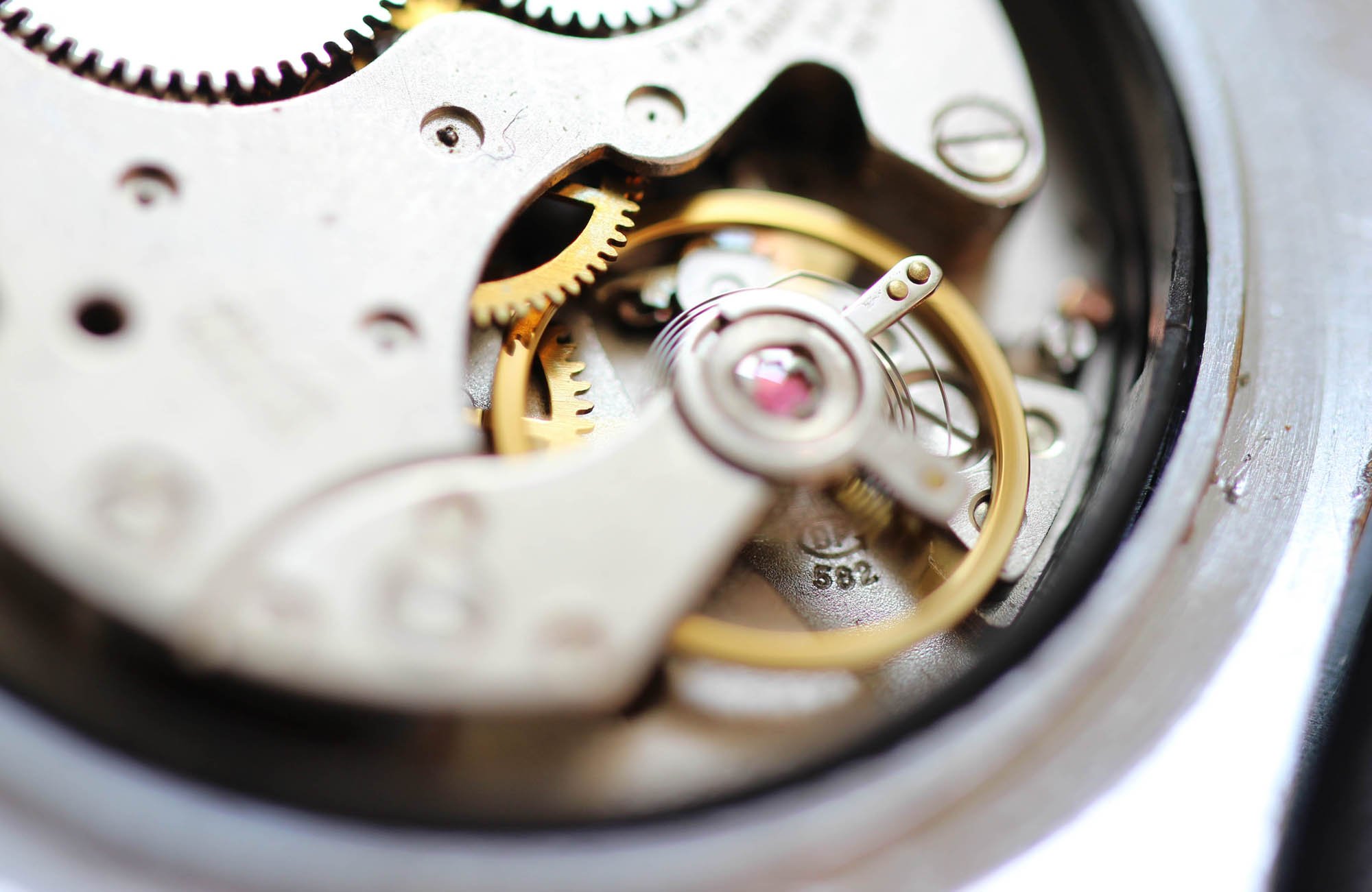 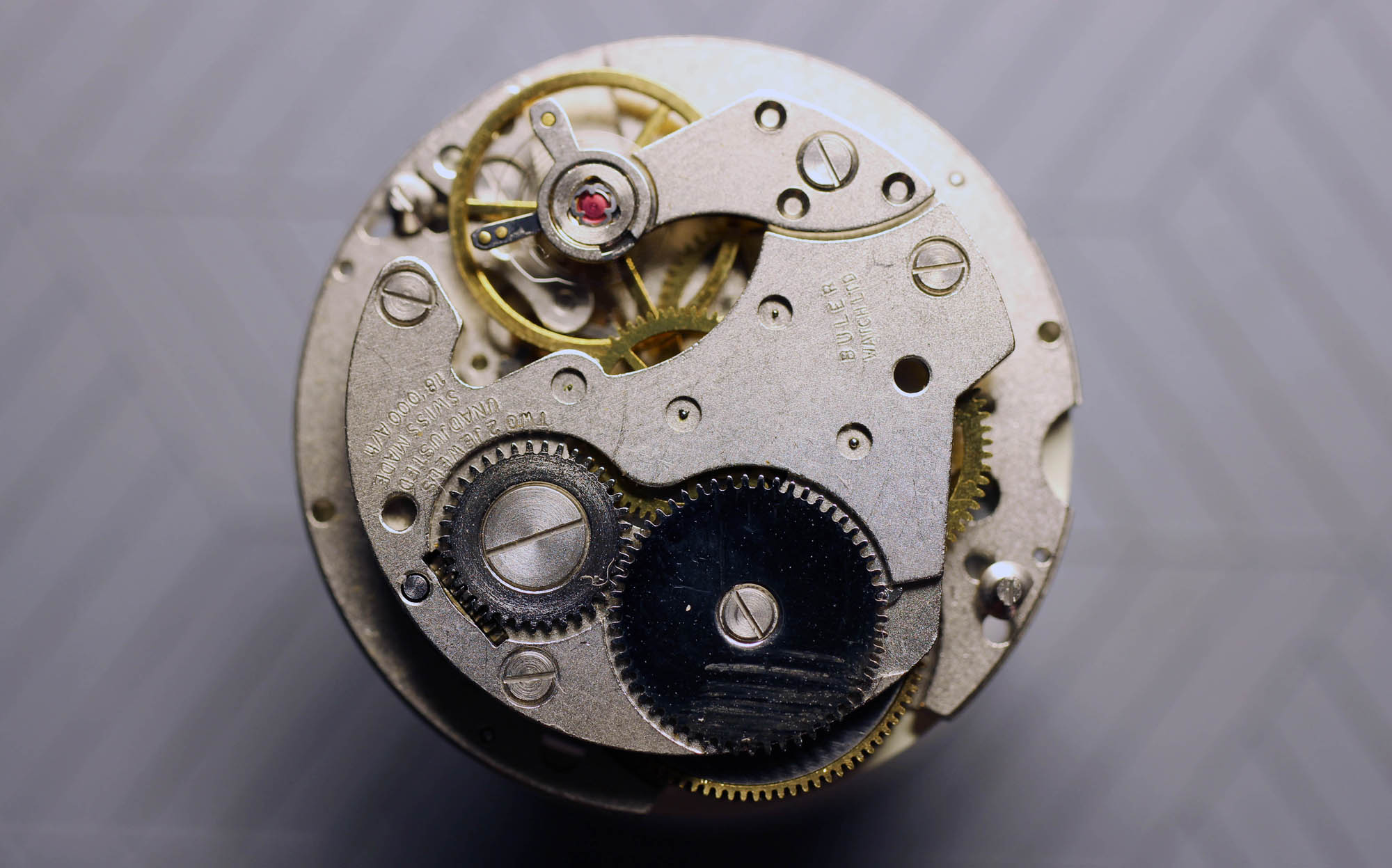 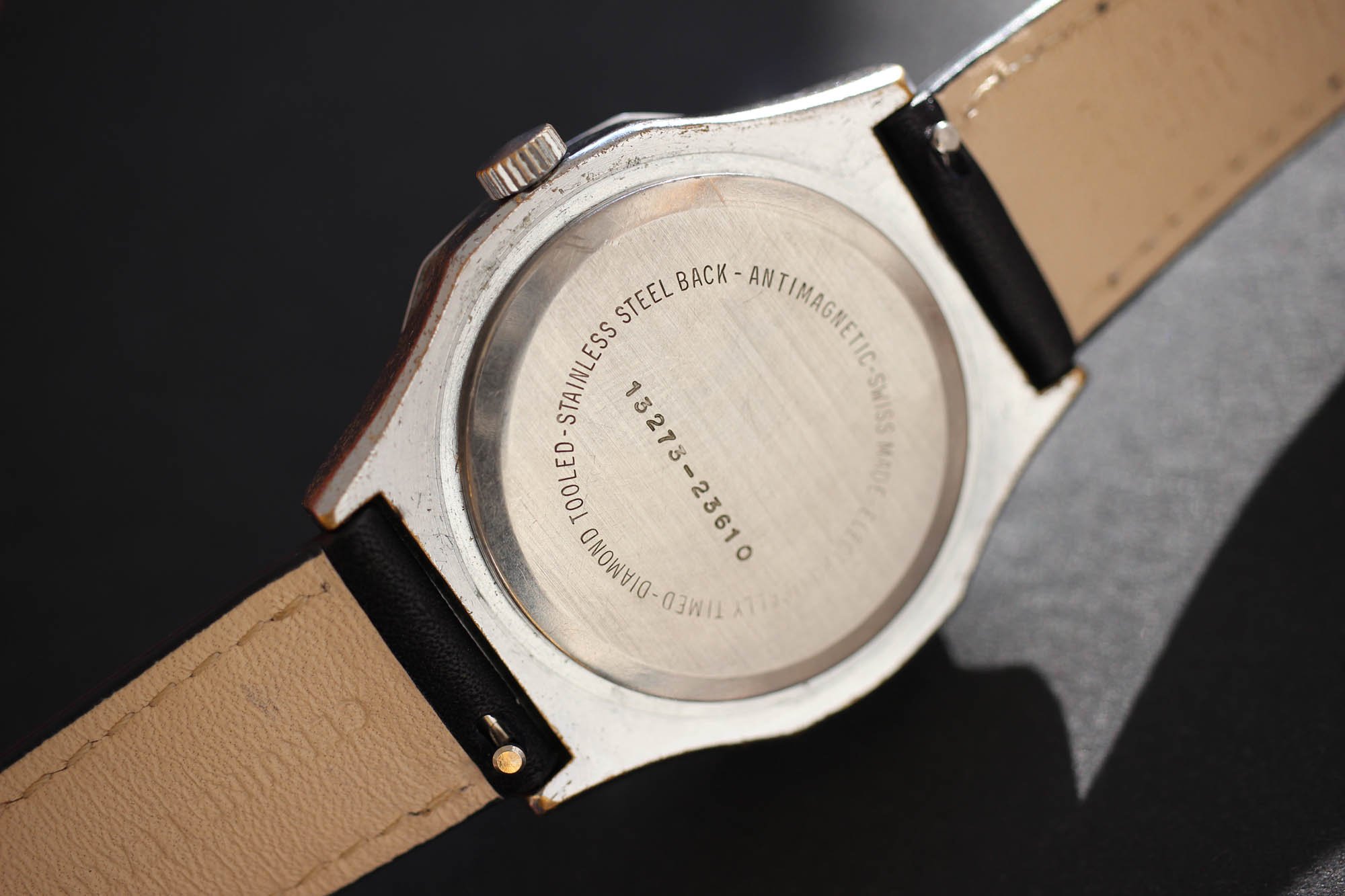 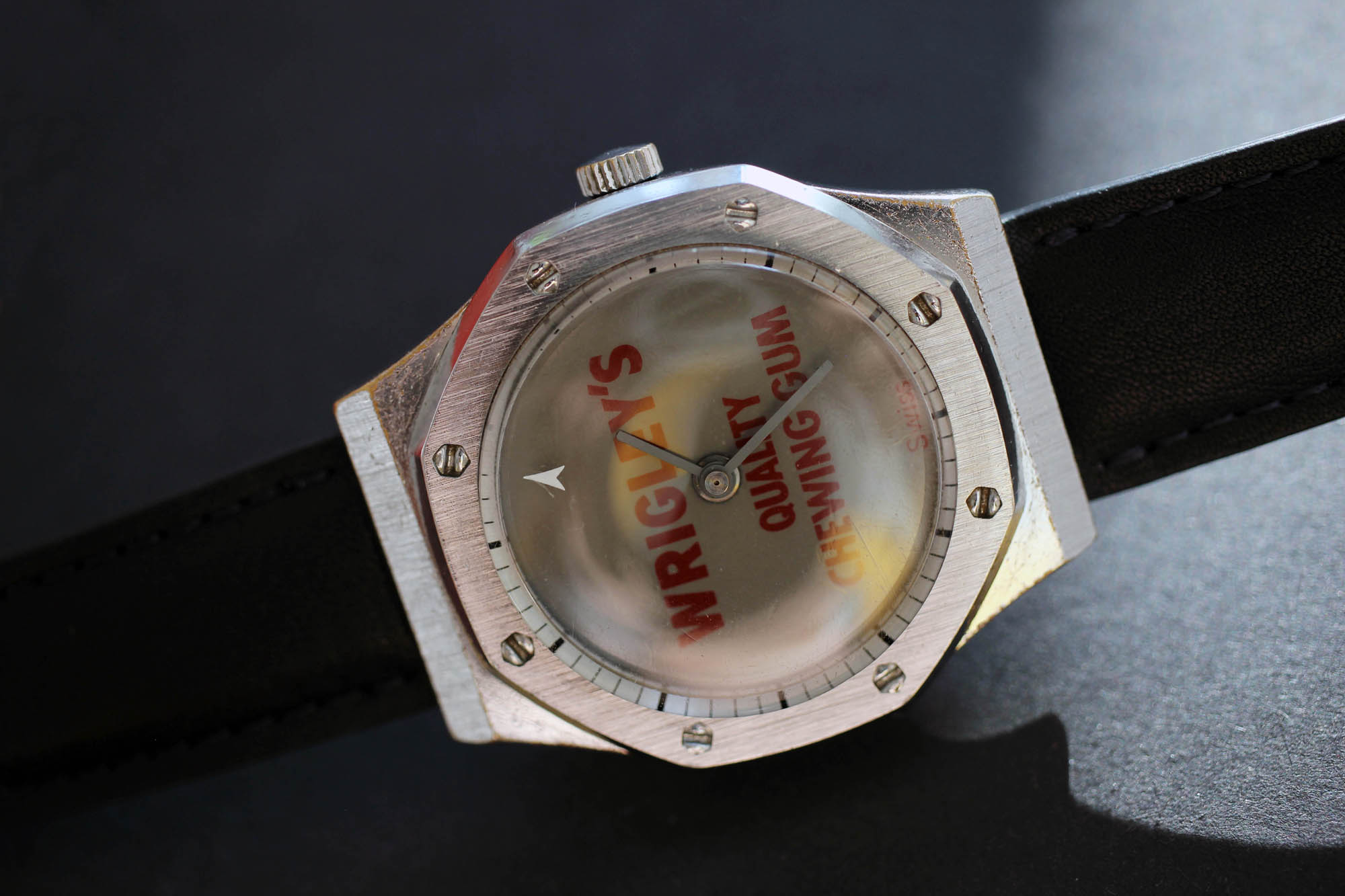 Hot Topics
Introducing: The Omega Speedmaster Super Racing With Spirate System
165 comments
Design Vs. Specs — Which Is More Important To You When Buying A Watch?
86 comments
My Predictions For New Omega Speedmasters In 2023
54 comments
The Time To Buy Is Now: How The Current Economic Climate Influences Watch Buying And How You Should React
51 comments
A Regret-Free Guide To Buying Your First Luxury Watch — Part Three: Higher-End Options From Omega, Rolex, Grand Seiko, And More
48 comments
Popular
Rolex GMT-Master History And Overview Of All Major References
Robert-Jan Broer
21
Grand Seiko SBGA211 ‘Snowflake’ And Why I Didn’t Buy It
Robert-Jan Broer
23
You Asked Us: Rolex Submariner vs Omega Seamaster
Robert-Jan Broer
25