If you start to explore the world of Speedmasters and Omega in general one name you will come across is the late and great Chuck Maddox. Many things we know today are results of his thorough research, which is still a reference point for a lot of topics. Let that be a Speedy Pro, a vintage Heuer or vintage chronograph in general; he had his hands in everything. And boy was he ingenious. So ingenious that his works inspired a lot of people to start their own research, buy their first watch, or like the subject of this article, make their own “authentic” NASA Velcro strap. 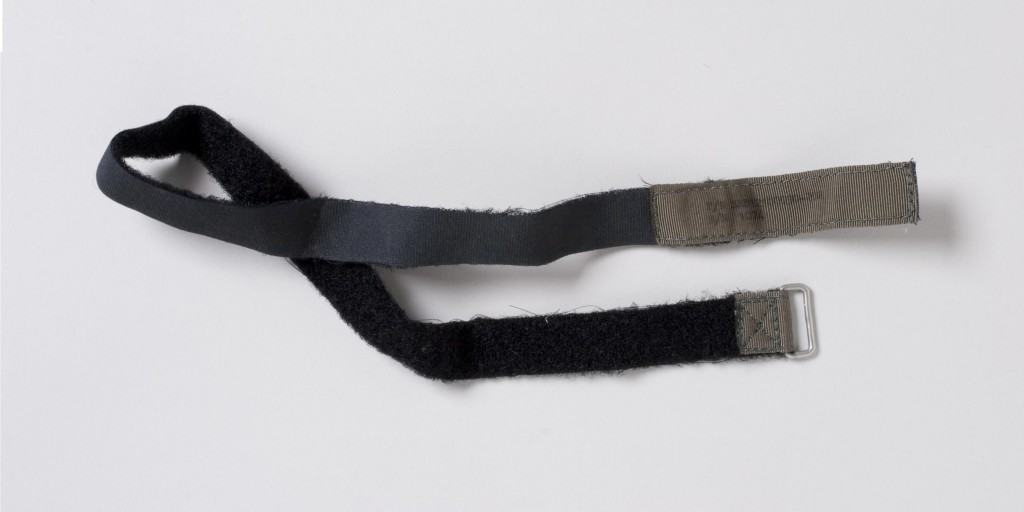 As Phil (or Kizzi known by members on watch forums and eBay) a veteran Speedy wearer for 40 years puts it:

“…always thought it would be cool to have a watchband linked to Apollo to go with the watch, but the ones available never looked like flown ones sold at auctions or from the NASA image archive, and that always puzzled me. It wasn’t until I chanced across Chuck Maddox’s website that hosted the NASA watchband specification SEB12100030 that I realised everyone else had got it wrong and if I wanted one just like the astronauts wore I’d have to be make it myself.” 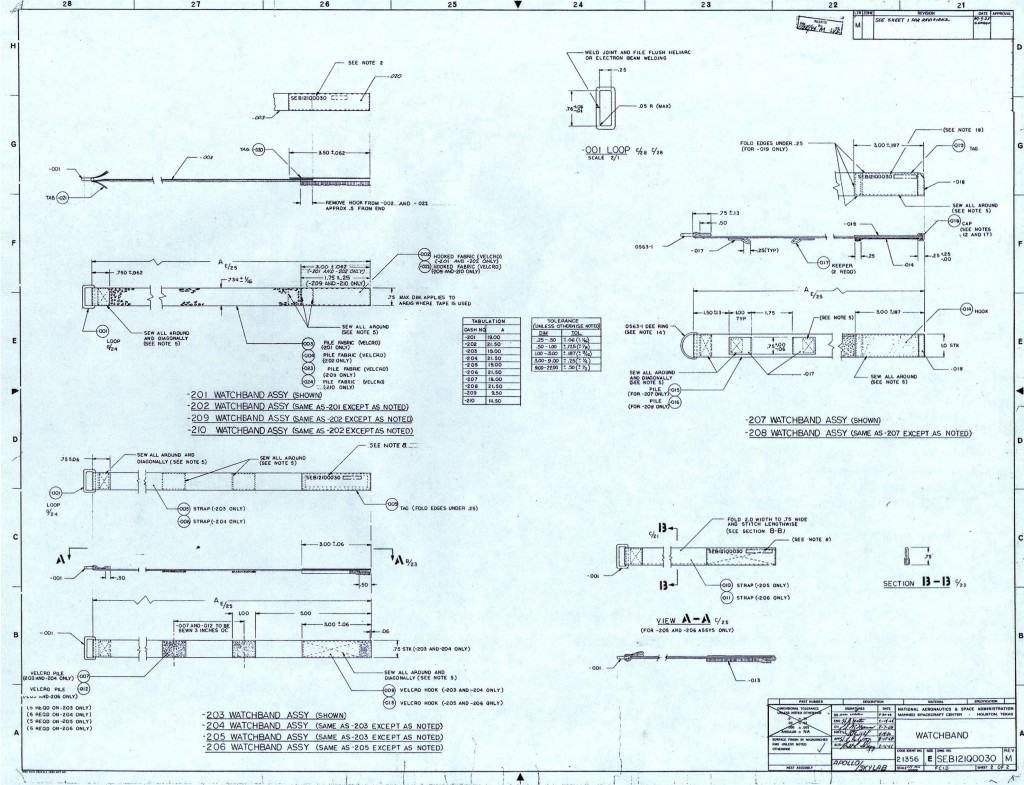 It is fair to say that Chuck was, unintentionally though, involved in this project. The outcome is an instant classic and something every Speedy fan must have – though it looks stunning on other models too. But lets not run ahead so fast, let me tell you the whole story from the beginning.

It is well known that the standard issued Omega Speedmasters were equipped with a Velcro strap for the astronauts since the Apollo missions. These straps were produced in various lengths (and colors) and were used by the crewmembers both inside and outside the space shuttle. The strap was very convenient in space; you could use the Velcro to strap the watch onto a hook of an equipment if needed, it was much lighter than the bracelet and more durable than any leather or corfam at the time, not to mention that it was a simple design with few parts that could break. As said before, it was strapped on the wrist of the astronauts while working inside the cabin or – using the long strap – onto the sleeve of the space suit during spacewalk. We have probably the two most iconic images to prove this below. On the first photo you see Buzz Aldrin inside wearing his Speedy on the long Velcro (please note how it is strapped twice around his wrist) and on the image below (taken from his Wikipedia page) you see Ed White wearing his signature Speedy  around his left wrist during a space walk. There are numerous other photos of astronauts wearing them during training, after landing or even on the moon. 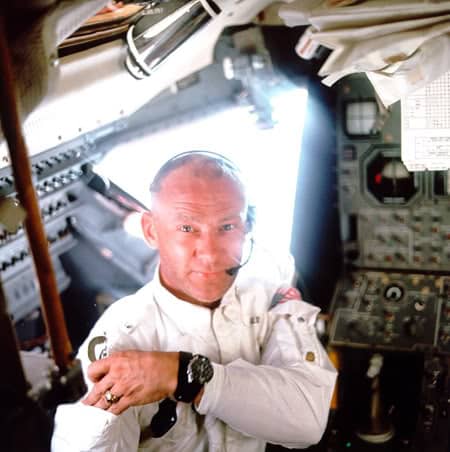 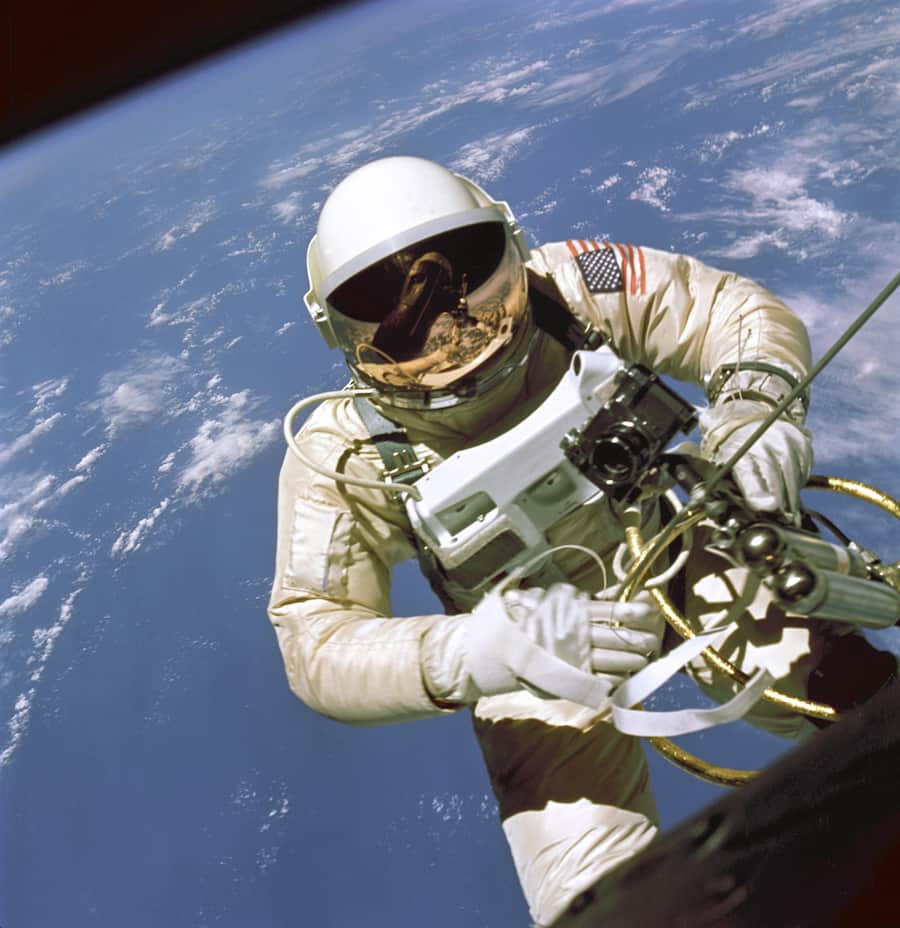 Now let’s get back to Phil and his creations. When I received some info from Phil, I was amazed by the thoroughness of his research. He wanted to create a strap that not only looks like the strap could have been provided by NASA but is actually of the same quality of the original. He used the original blueprints and went the extra mile with the particulars. I won’t bore you with the details (they are available upon request) but let me give you a few examples. The fonts on the binding tape (and even the tape itself) are not just some Times New Roman CE fonts but the “original” used by NASA. How does he produce it? Here is the answer:

“I invested in a vintage typewriter with the correct font for the serial and part numbers, but the markings can be hard to read on mil-spec dark grosgrain ribbon in direct light. This is perhaps compounded by my design decision not to chase an olive drab colour for the binding tape that matches the faded genuine flown items. I use the official U.S. Army OD #7 for a factory fresh look,”

The Velcro itself is no modern production but vintage mid 1970’s deadstock. Even the thread used in the straps is the correct color used in that era. So it is safe to say that if you are looking for an “authentic” NASA Velcro I really know no better choice than these straps. The price is a friendly $50 or so, which given the time spent on research, the vintage deadstock material and equipment used to produce it, is pretty much nothing. They come in a regular plastic bag but the cool detail is the NASA-like tag/sticker on them. I have to say I was afraid to wear it first. I thought it would scratch the back of my transitional but found a very cool way of using it – before I just used it like a NATO. I also thought the material is rough and it will scratch my wrist but found it to be an extremely comfortable fit. I have had my fair share of straps in the past so I could compare it with many I have had and I have to say they are top notch. If you have a Speedy and you need a summery alternative when the thick leather greatness is too tight, you have to get one of these. I wear mine as I type this; even tried it on the Mark III which we all know is a big dude. 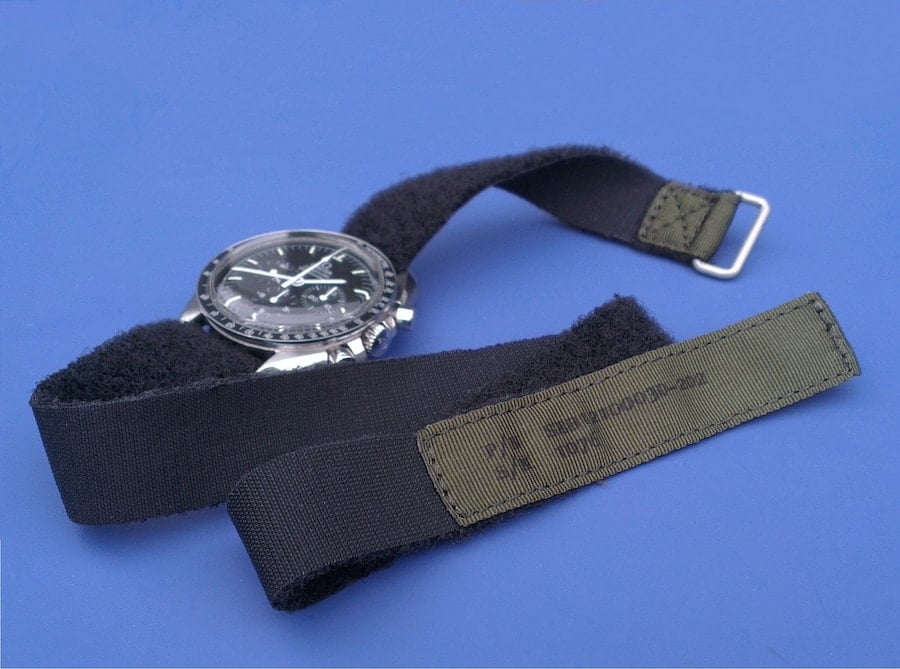 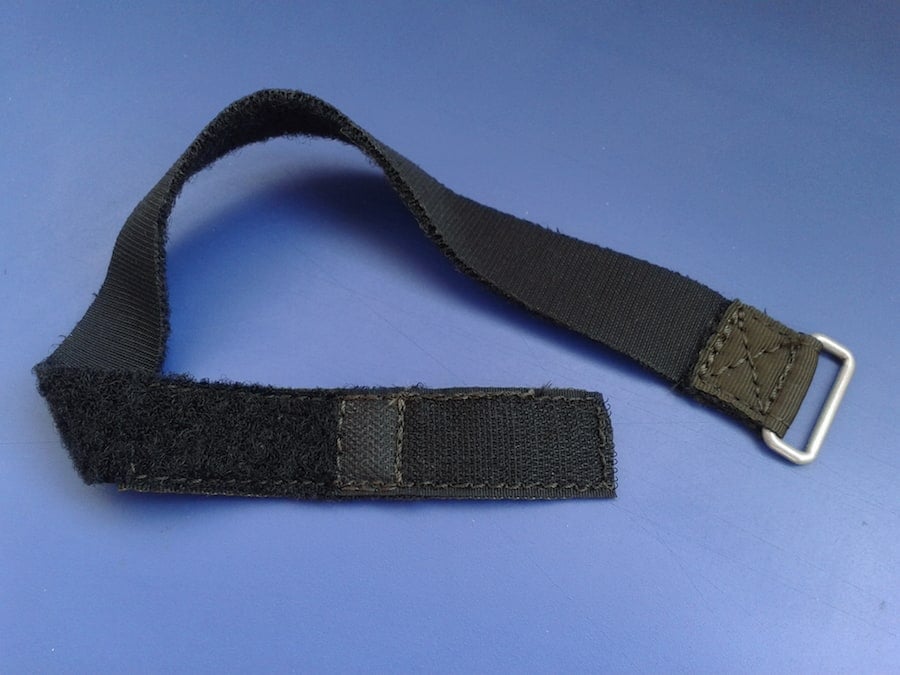 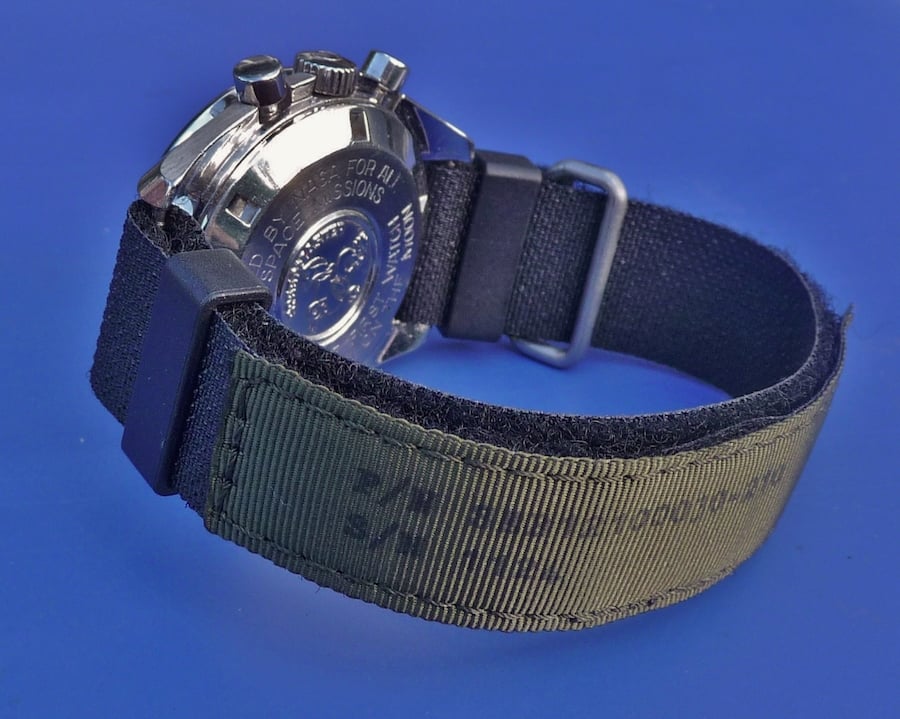 If you would like to get one you can get in touch with Phil on WatchUSeek or Omega Forums. Also keep an eye out for his dealer profile on eBay where he lists every once in awhile. This is not a money-making business but one he does out of love for the strap and that makes a big difference. These are the guys we need in this community who have the love and passion. I mean it could be just a strap but now that you know all the effort put into it I’m sure you’ll think of it differently. It is also a nice conversation starter for those GTGs (speaking of which, have you already signed up for our German GTG yet?) all you need to pair them is some military green chinos…or a spacesuit if you have one. 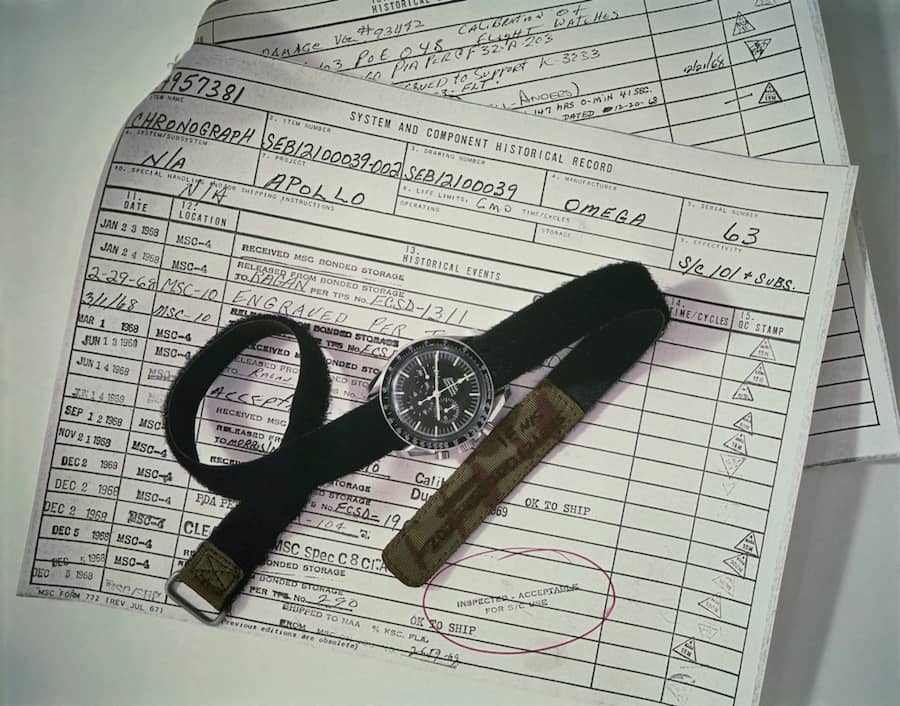 Hot Topics
Introducing: The Omega Speedmaster Super Racing With Spirate System
165 comments
Design Vs. Specs — Which Is More Important To You When Buying A Watch?
86 comments
My Predictions For New Omega Speedmasters In 2023
54 comments
The Time To Buy Is Now: How The Current Economic Climate Influences Watch Buying And How You Should React
51 comments
A Regret-Free Guide To Buying Your First Luxury Watch — Part Three: Higher-End Options From Omega, Rolex, Grand Seiko, And More
48 comments
Popular
Hands-On With The Seiko Prospex Dawn Grey Series
Robert-Jan Broer
12
Two Patek Philippe Nautilus Watches: 3700/1A Versus 5711/1A
Robert-Jan Broer
16
Hands-On With the Seiko Prospex SRPC91K1 – Save The Ocean
Robert-Jan Broer
15