Back On Cloud Nine With Patek Philippe

One of my biggest fears is that I take things for granted. And by “things”, I mean both immaterial and material ones. Let me focus on the material side of my fear since this is a watch website and not a self-help platform. When you see as many watches as I do — a privileged situation, I know — it can cause an overload of the senses. You go numb a bit. Watches start to look alike, and prices become numbers without meaning. That’s bad. A watch journalist needs to be sharp and open-minded like a child. And during the recent Watches And Wonders show in Geneva, I did feel like a child again, and what I saw sharpened my senses. After an intense touch-and-feel session, I was back in on cloud nine with Patek Philippe. Have a look at the six rejuvenating watches that reignited my admiration for the famous brand.

As I was sorting through the pictures that our Social Media Manager Sinara took of me wearing various new Patek Philippe creations, I remembered wearing the 5070P — a blue dream in platinum — a while back. What a chronograph! The feeling that watch delivered was sensational. Not a lot of watches have the ability to cause mental and even physical sensations, but the legendary 5070P sure has that power. I think every watch enthusiast would be in awe of a platinum hand-built, hand-wound chronograph from the most prestigious watch brand in the world. But the number of watches that we see come through Fratello HQ and the even larger number of watches that drop in the mailbox have an effect on how we see them. 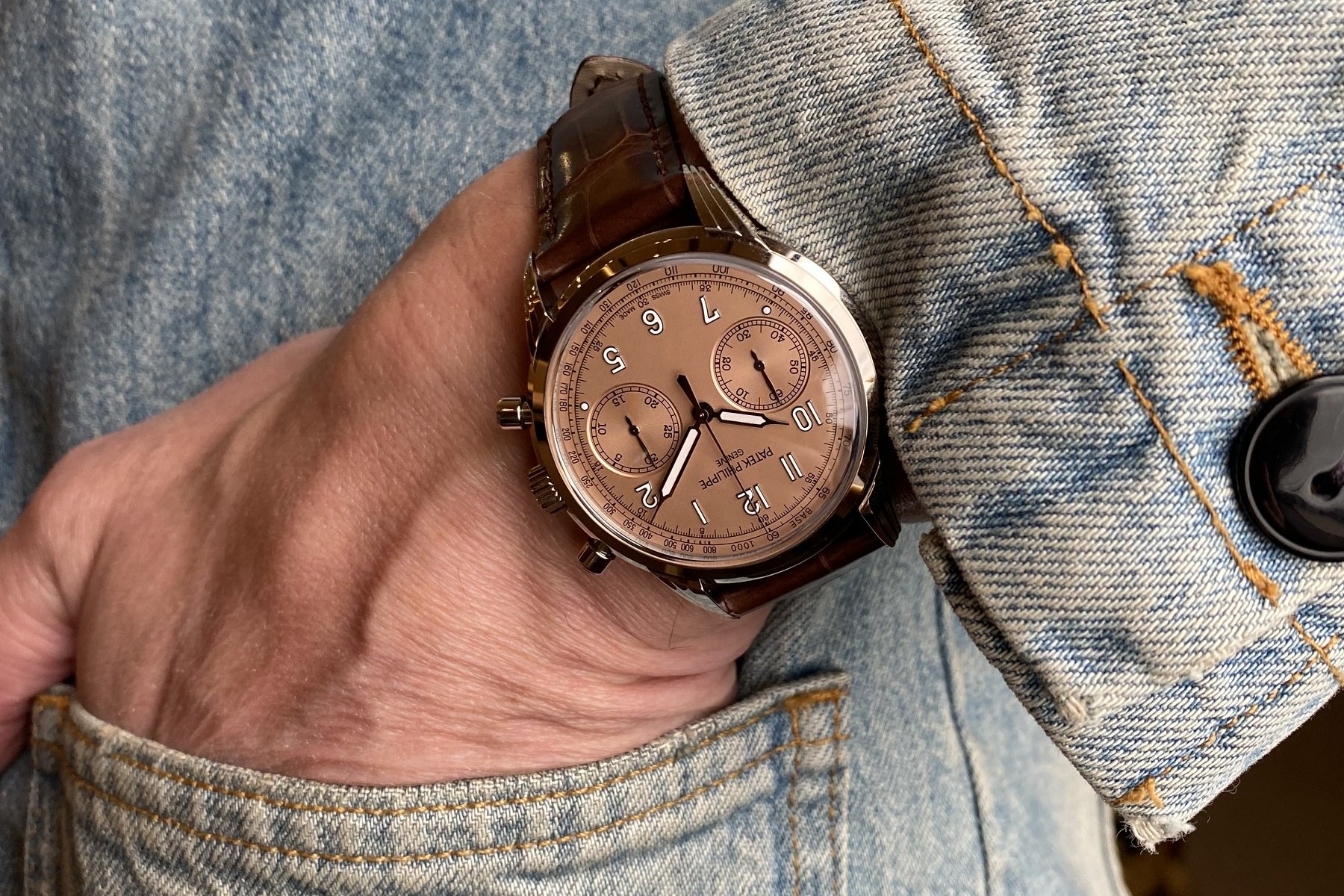 Let me focus on the digital news stream. No press release does any watch justice. No matter how tasteful or crisp the pictures appear, a watch can only be experienced on the wrist. That not only goes for a creation from a Kickstarter brand but also for a watch from the top of the Haute Horlogerie pyramid. So a press release from Patek Philippe does spark curiosity, yes, but no matter how good the description and the included pictures are, the magic just doesn’t come across. But as soon as I saw, touched, and put a 2022 novelty on my wrist during Watches And Wonders, I was touched by the Patek Philippe magic wand. And REO Speedwagon was right (again) — I can’t fight this feeling. And why would I? Being enchanted by a superbly made and expertly designed timepiece is something truly addictive. And I experienced it six times over with these Patek Philippe creations. 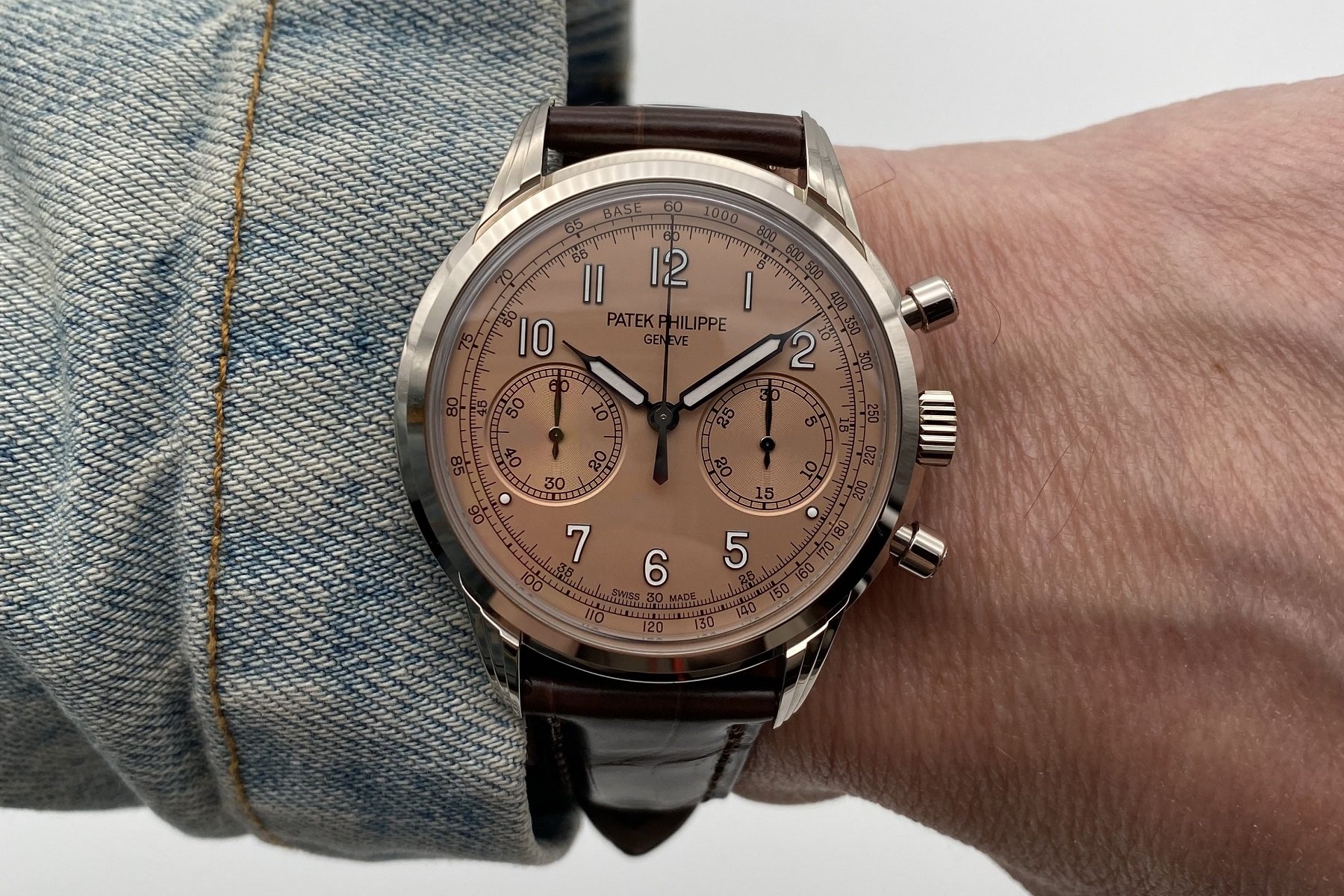 The first dose of watch bliss came from the 5172G Chronograph with its salmon dial. Jorg already wrote about the 5271G during the Geneva watch show, so I will skip all the technical details. The purpose of this article is not so much to explain what the watch does, what it’s made of, or how much it costs. What Sinara and I hope to bring across is the live feel of the different watches. That’s why you get the raw, unedited stuff. I’m trying to share the magic of the moment with you. And the magic of the 5172G Chronograph is the hand-wound caliber on the back and the salmon dial on the front. I heard people complain about or question the aesthetic added value of the dots — the blue-dialed version of the 5172G doesn’t have them — but believe me, they look smart and add visual drama 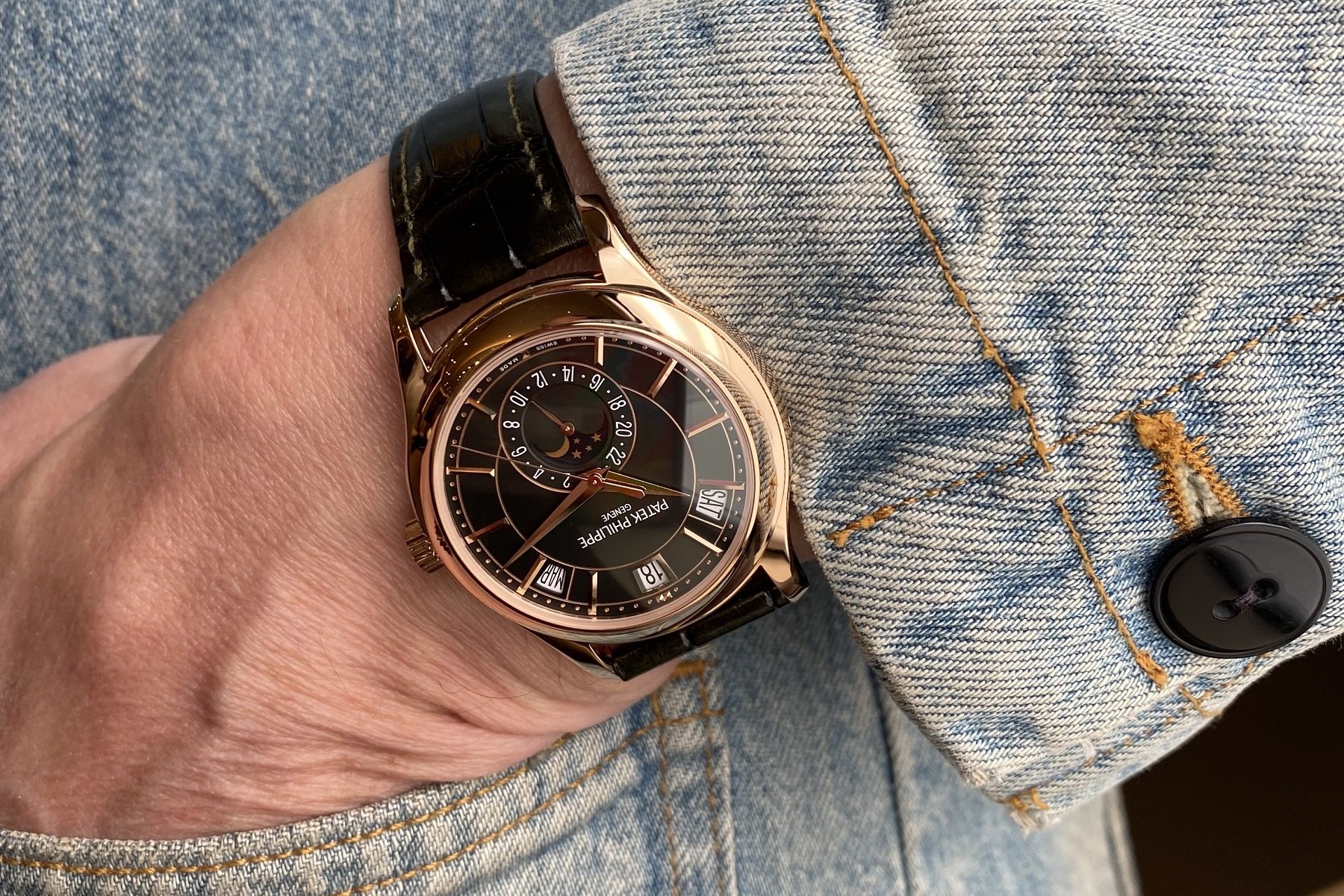 The Annual Calendar ref. 5205 is unmistakably a Patek Philippe because of its day/date/month apertures arranged along the arc of a circle. The design debuted in 2010, and now twelve years later, a new dial color comes out. Patek calls it “olive green”. In reality, it’s a shade between brown and green. It’s just very hard to pinpoint. This comes across in pictures too, as you can see. Let’s blame the sunburst motif, the black gradient around the rim, and the brown strap. On the wrist, it doesn’t matter anyway. The different shades create a harmonious appearance. This is also thanks to the concave bezel, the subtly hollowed flanks, and the skeletonized lugs. 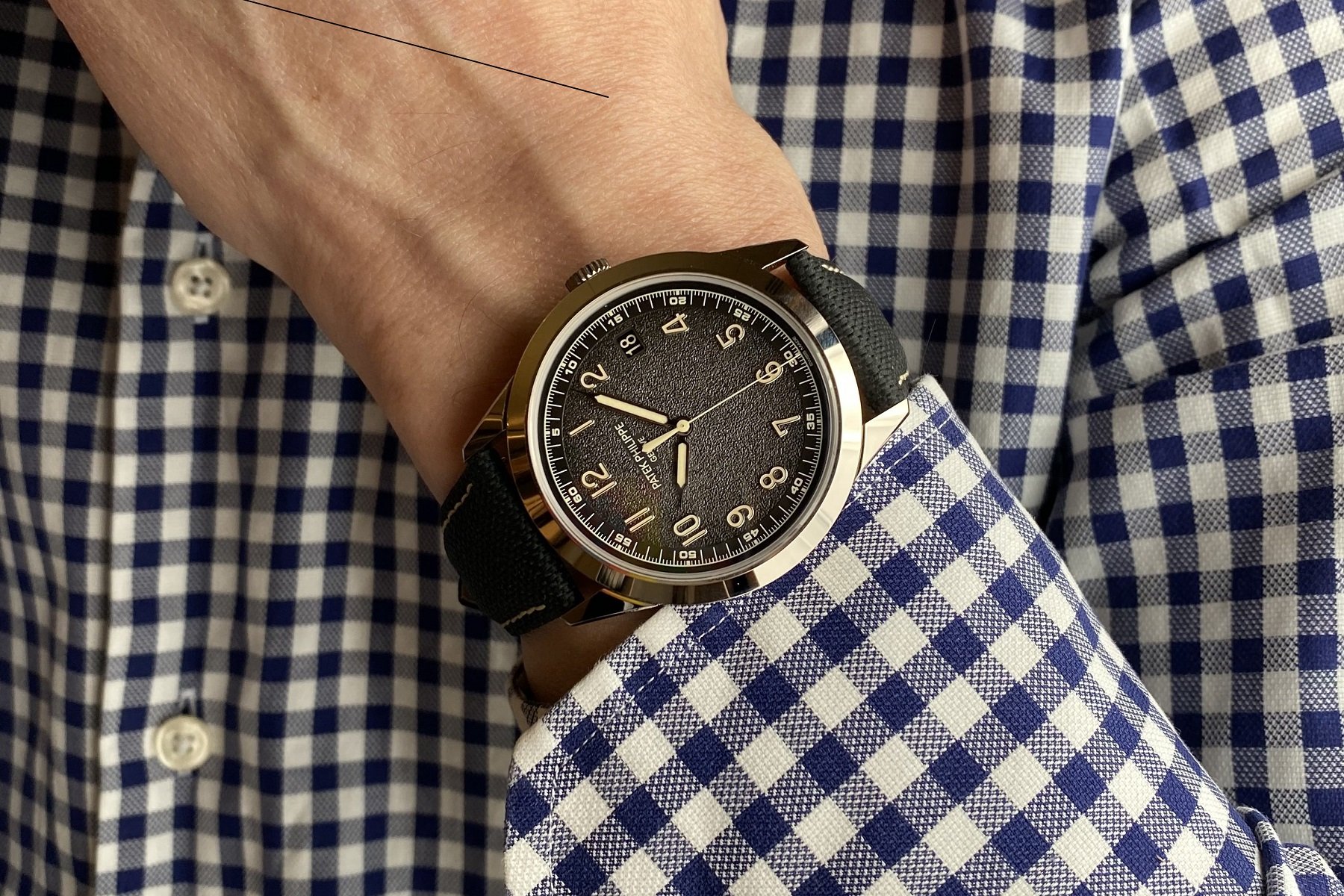 I’m not the biggest fan of retro-designed watches. Consequently, I approached the latest addition to the Calatrava collection that I saw in the press release with a bit of skepticism. The new white gold ref. 5226 is the perfect illustration of the shortcomings of a press picture. Once I experienced the 5226G Calatrava, everything changed. You simply have to touch the sides of the 40mm case that is decorated with a Clous de Paris hobnail pattern. You’ve got to see it up close and personal to discover how the motif continues around the entire case band and fully appreciate the brilliance of how the lugs integrate with the case back. The charcoal-gray dial with its grainy texture and black gradient rim is also fantastic to observe on the wrist. The 5226G Calatrava comes on a sober black calfskin strap with an embossed motif and beige stitching. Paired with this dial, it’s utterly fantastic. 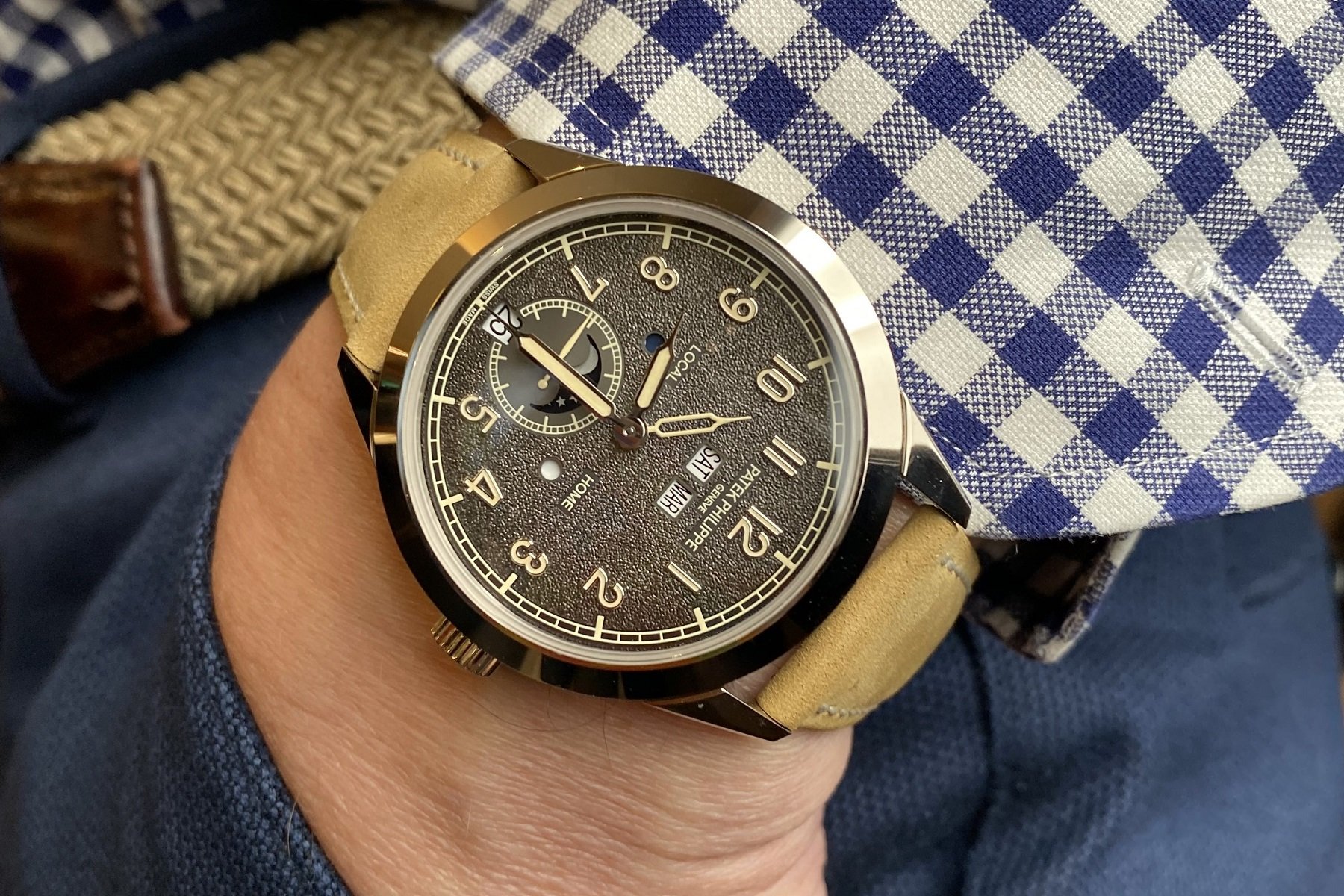 The 5326G is the perfect example of a watch that looks good in pictures — it’s mainly the dial layout that is responsible for that — but actually blows you away in the metal. The 41mm white gold watch is a symbiosis of an annual calendar and a travel time complication. That explains the impressive dial with its many apertures. The back of the watch reveals a horological masterpiece with a micro-rotor, the new caliber 31-260 PS QA LU FUS 24H. Patek states that the structure and color of the charcoal-gray dial are reminiscent of the cases of old photo cameras. Whatever the inspiration, on the wrist, the dial with its plethora of indications and hands looks ace.

Attached to the marvelous case is an interchangeable strap, either in beige calfskin with a nubuck texture or the black strap I experienced on the 5226G Calatrava. The beige strap provides a fashionable contrast, creating an understated look that will get noticed. Yes, that’s a paradox, I know. But have a look at the pics to see what I mean. 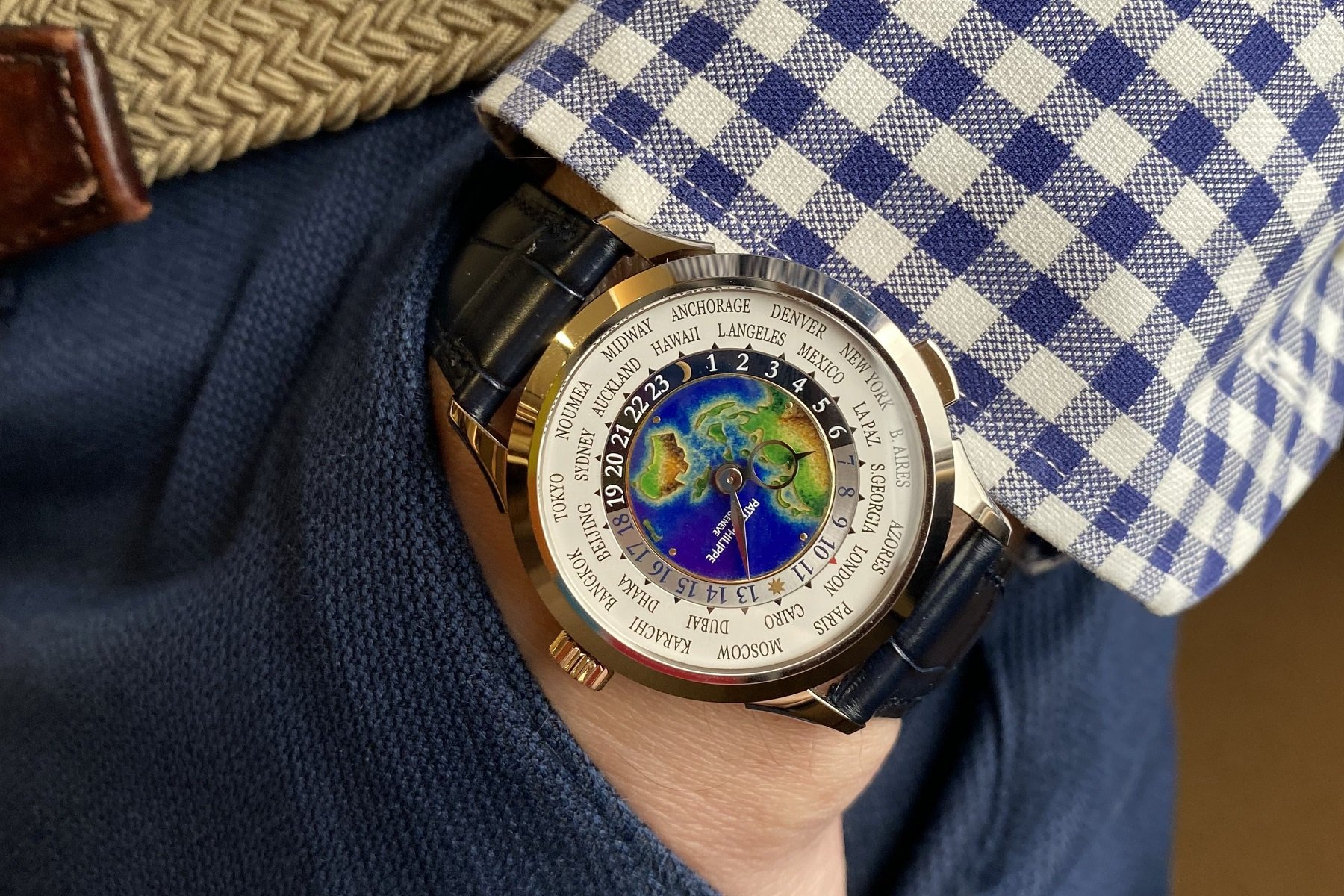 I don’t live in Australia. I’ve never even been down under. But that doesn’t mean I can’t admire a grand feu cloisonné enamel dial depicting Southeast Asia and Oceania in a 38.5mm white gold watch. A world-time watch from Patek is a familiar sight, although you actually won’t see many “in the wild”. The brand, however, has been producing them for many decades — this type of ingenious world-time watch was conceived by Louis Cottier in 1931 — and that’s where the familiarity comes from. But when I put the watch with its navy blue square-grained alligator strap on the wrist, it felt magical. That’s because of the deep colors and nuanced depiction of the map that reveal both artisanal and artistic mastery. The signature hour hand is also a sight to behold. 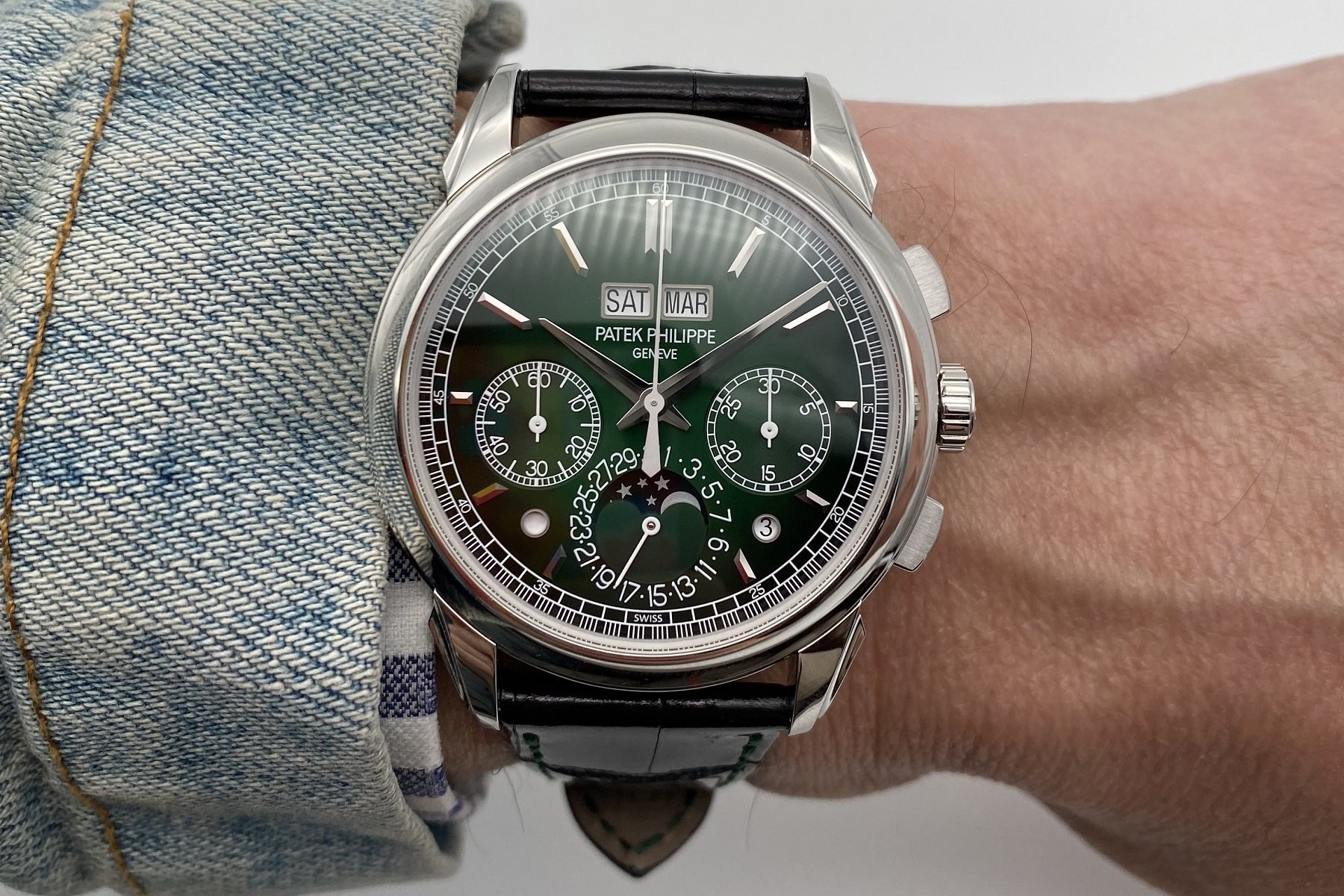 I saved my personal favorite for last. This watch surprised me the most because it has a lacquered green dial, and I don’t really care much about those, to be honest. But my indifference towards green-dialed watches changed instantly when I strapped on the 5270P Grand Complications with its deep green dial and black gradient rim. It was already quite the experience since the 41 × 12.4mm case is made from hefty platinum. But once on the wrist, the light that played with the dial turned it from intriguing shades of green to even a sinister black. And you know what? That shiny black alligator leather strap with green stitching also impressed me. The glossy strap and its folding buckle add to the exclusive experience of this grandiose complication. 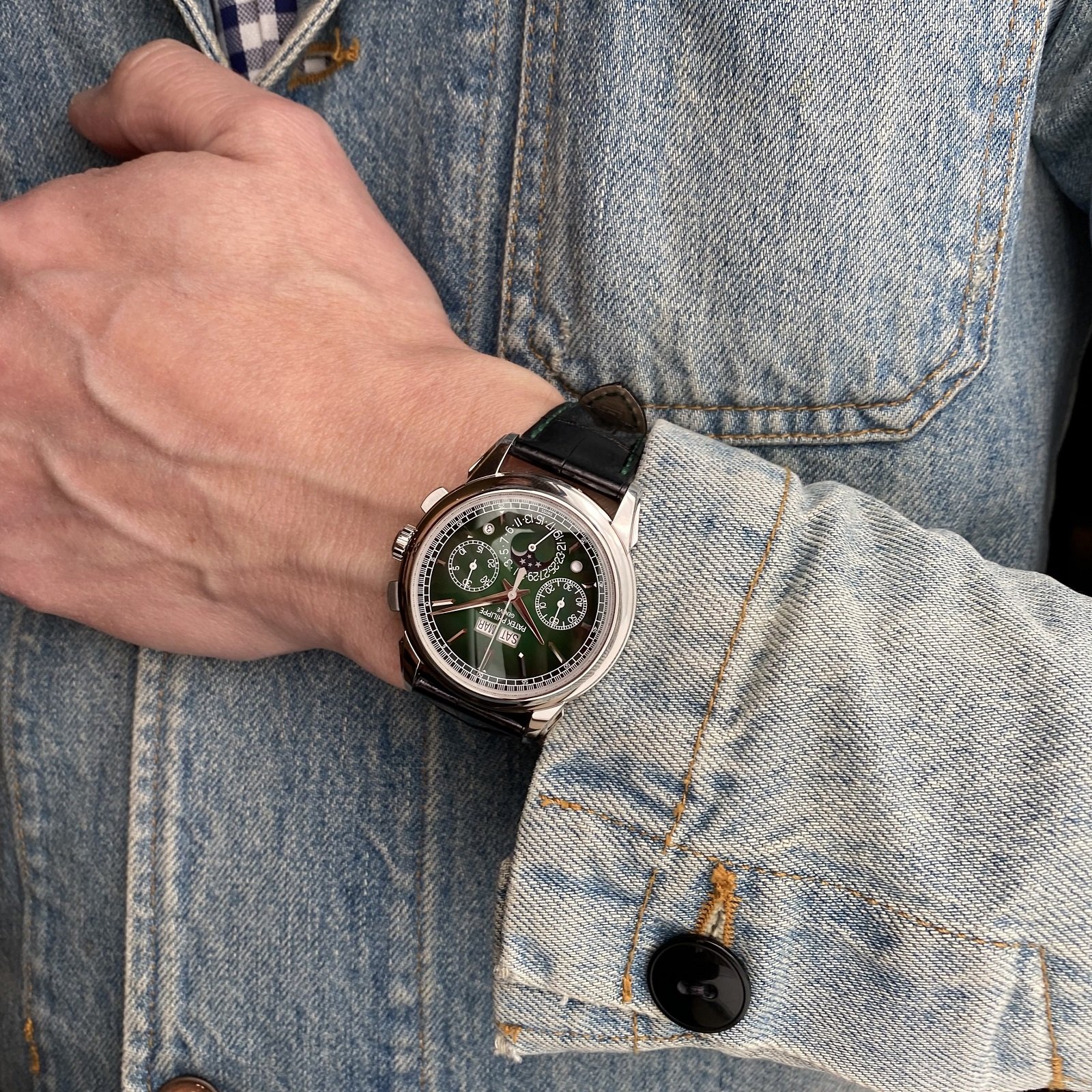 The reference 5270 has been an Haute Horlogerie spectacle since 2011. In yellow gold with a white dial, the manually wound perpetual calendar chronograph is a traditional masterpiece. In rose gold with a black dial, it looks a bit more contemporary, especially on a matching bracelet. But in platinum and green, it becomes almost futuristic. And with the diamond between the lugs at 6 o’clock, this 5270P will always tell you how special it is. As if you even need to be reminded of that. I didn’t need that during the short time I got to experience the watch. But I did like the look of that twinkling gemstone; it hypnotized me.

… Patek not only reignited my admiration for the brand, but it also reinvigorated my enthusiasm for other traditional watchmakers.

The Patek Philippe touch, feel, and photo session was one of my personal highlights of Watches And Wonders. I was blown away by the brand’s creations. The physical experience made me realize that Patek Philippe is truly something else — something very special and magical indeed. With all the talk about the discontinuation and prices of the Nautilus on the gray market, the attention was drawn away from what Patek Philippe really is. And that is a traditional master of complicated watches, an expert in classical but also evolving designs, and a guardian of Haute Horlogerie. My session with Patek not only reignited my admiration for the brand but also reinvigorated my enthusiasm for other traditional watchmakers. Thanks, Patek Philippe, for putting me back on cloud nine.