Behind the scenes of A. Lange & Söhne wet plate product shoot

Some weeks ago we were invited by A. Lange & Sohne for an exclusive behind the scenes event capturing some of their watches in a very special way. We all know that photography is important for presenting watches in the best way possible but sometimes you don’t want those picture perfect images. Where the average pack shot or soldier images looks amazing it misses that real life feeling. Se when it comes to sharing images it’s great to see some more authentic shots. But when you look at the watchmaking tradition and craftsmanship you realize that back in the days photography was a different trade. 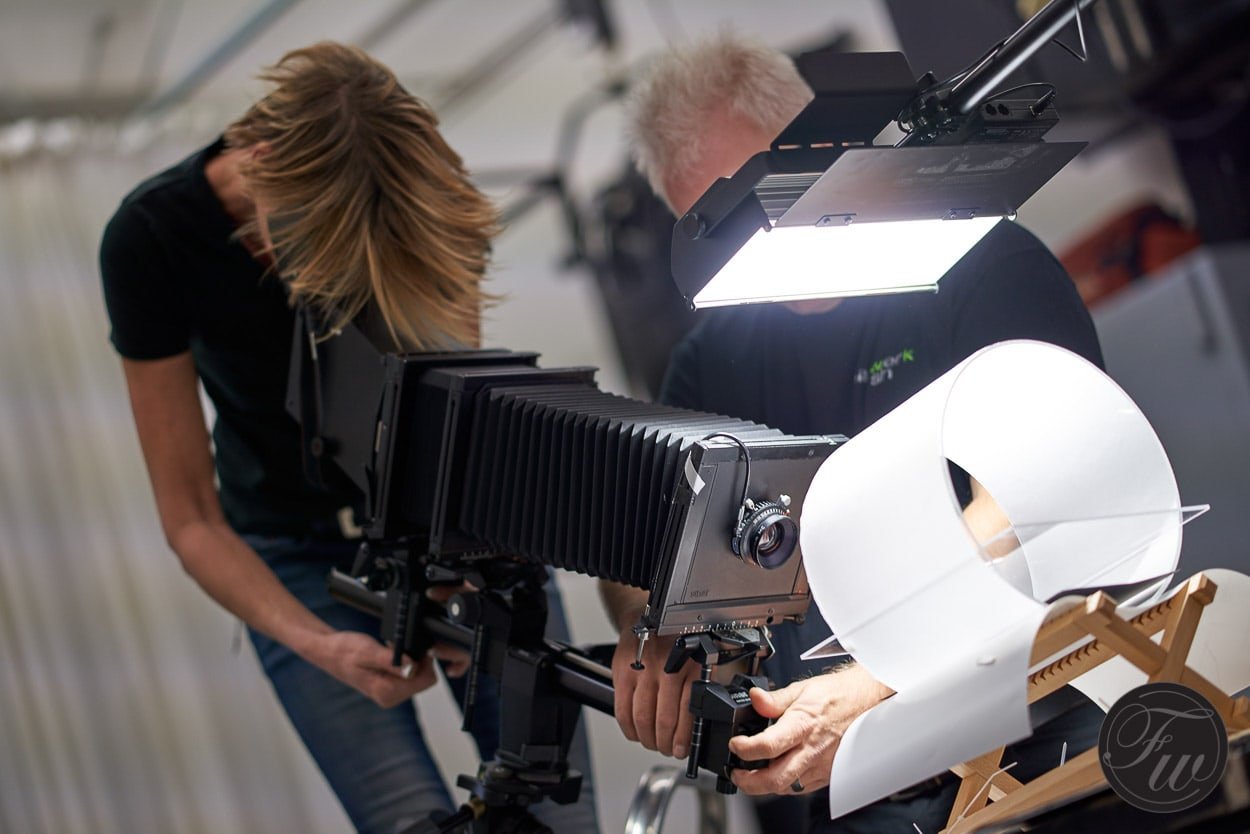 Being a photographer myself I have learned the trick of the trade the hard way. Spending endless hours developing my skills a and techniques through the years. Yet it’s far from the original way images were captured back in the days. There were no previews on a screen that gave you an idea of what the image would look like. However it still exists today and it was pretty exciting to receive an invite to have a look behind the scenes of this photoshoot. So I am about to learn how photos are being made in the traditional way using plates, chemicals and endless patience. Something that greatly resembles the production of the A. Lange & Sohne watches.

Upon arrival in an industrial area I found myself in a large photo studio. Here, the team had their equipment all set up as they used it the day before already. After a short introduction we looked at the process and and the steps we had to capture which are about 10 in total. So for the day we would go through them several times and I quickly learned that it’s a delicate and time consuming process. 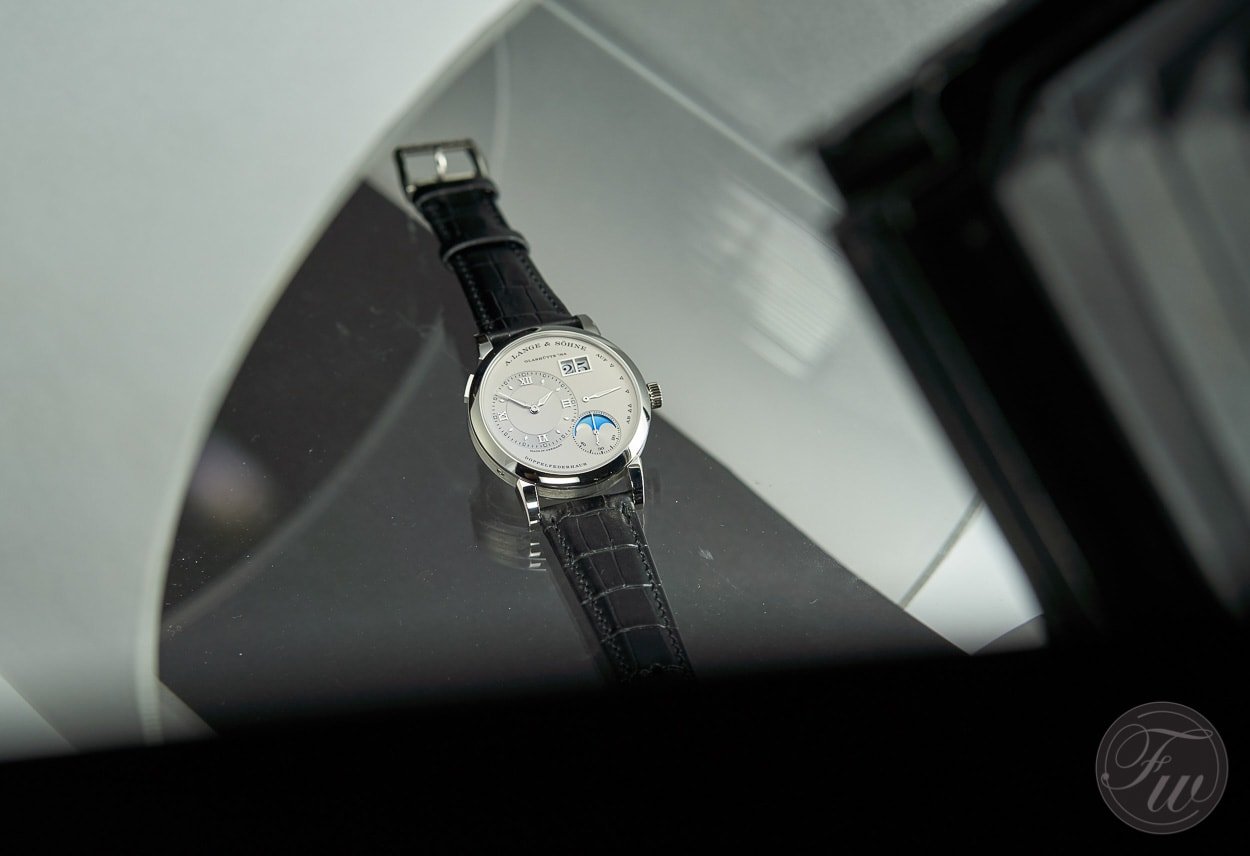 As with all photography basically, the setup of the lights and camera is equal. Finding the right composition is similar to the way I do it. However setting up a bellow camera asks for a lot more adjustments. With its multiple anchor points, functions as a tilt & shift lens which allows you to correct the perspective. In modern photography there are special lenses available for this which are mostly used in architecture. So after some time adjusting lights and the camera we are good to go. 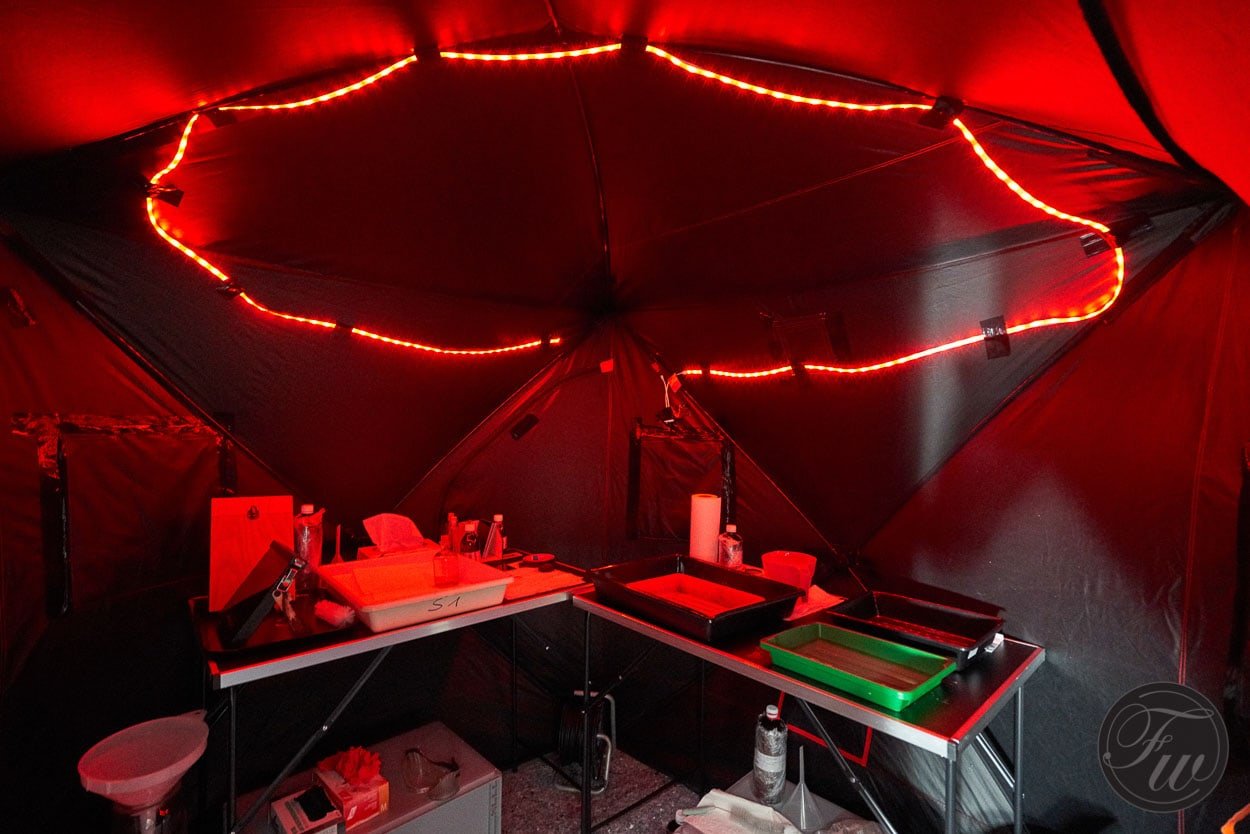 This is where it get’s a bit more complicated. After setting up the image we need something to record it. This is where it get’s interesting as we enter the lightproof igloo which is setup in the studio. All possible light openings have been taped to prevent light coming in. Inside there is just a bit of red led light which is just enough to see what you are doing. We start with a brand new sheet of aluminium of about 4×5” which only needs the film removed. To be able to capture an image on it we need to add a film of collodion by hand. Any excess liquid is removed and the plate now goes into a silver oxide liquid which sticks to the collodium. After some minutes the plate is ready and transferred into a plate holder. 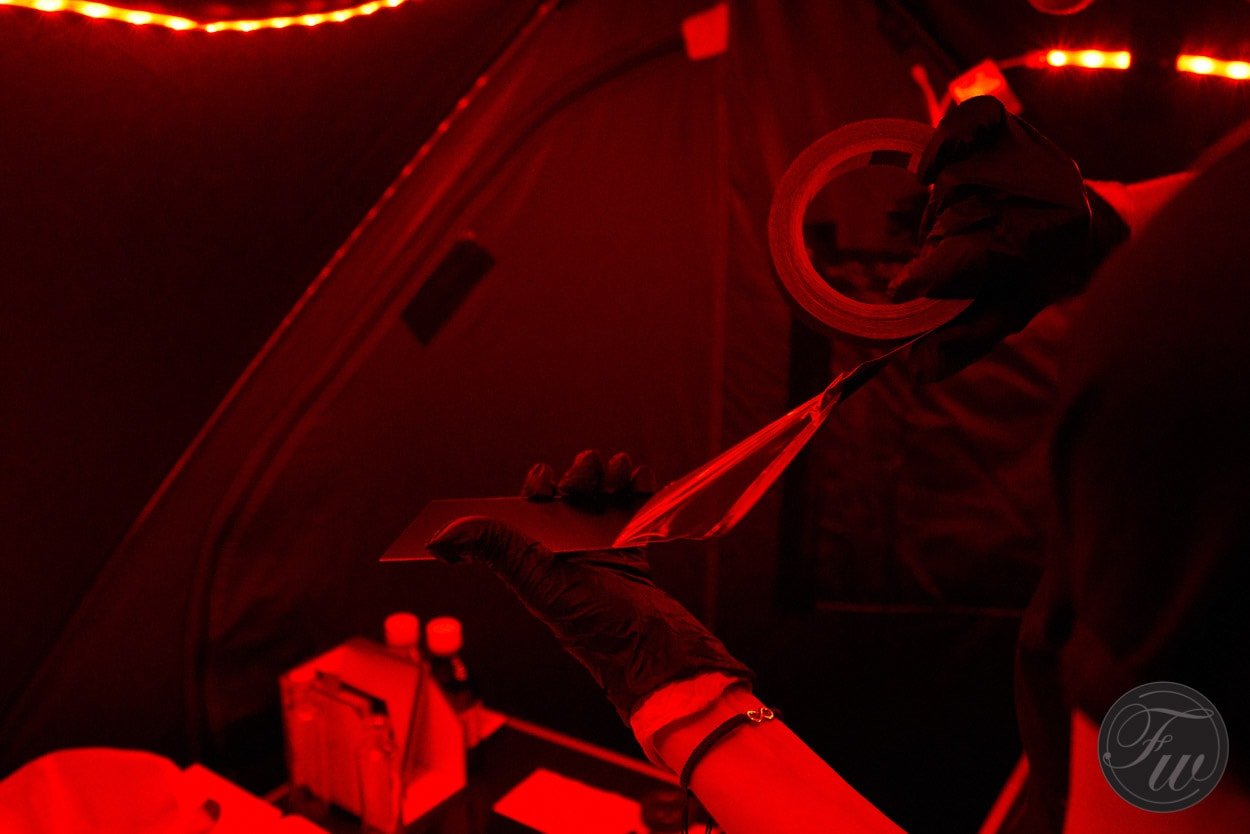 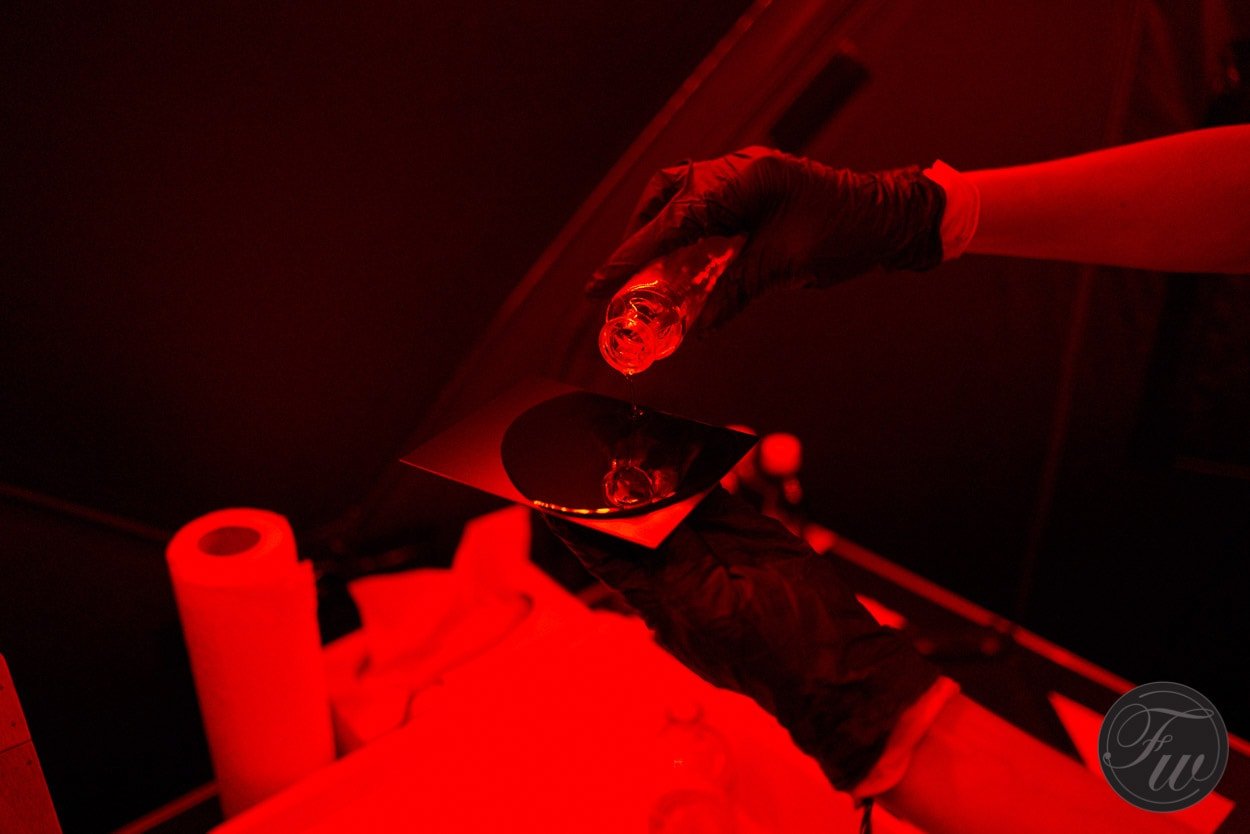 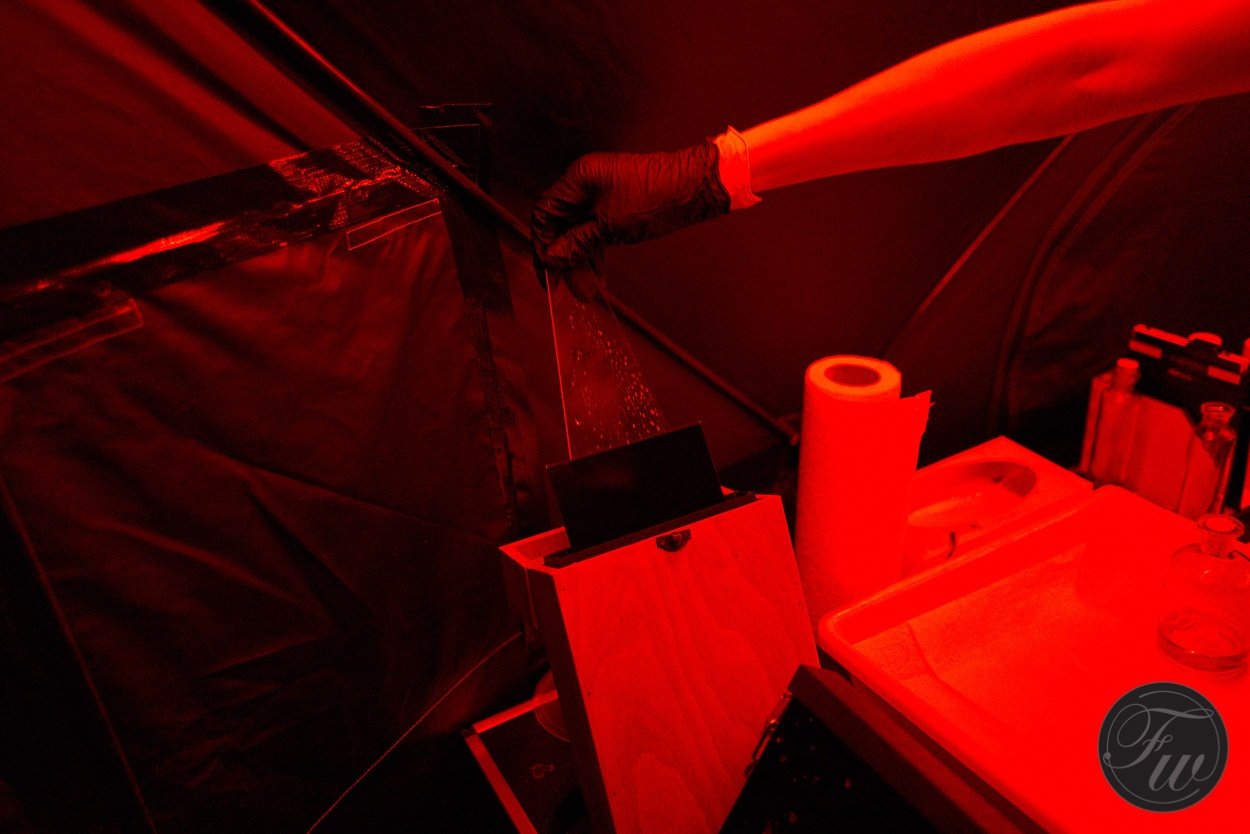 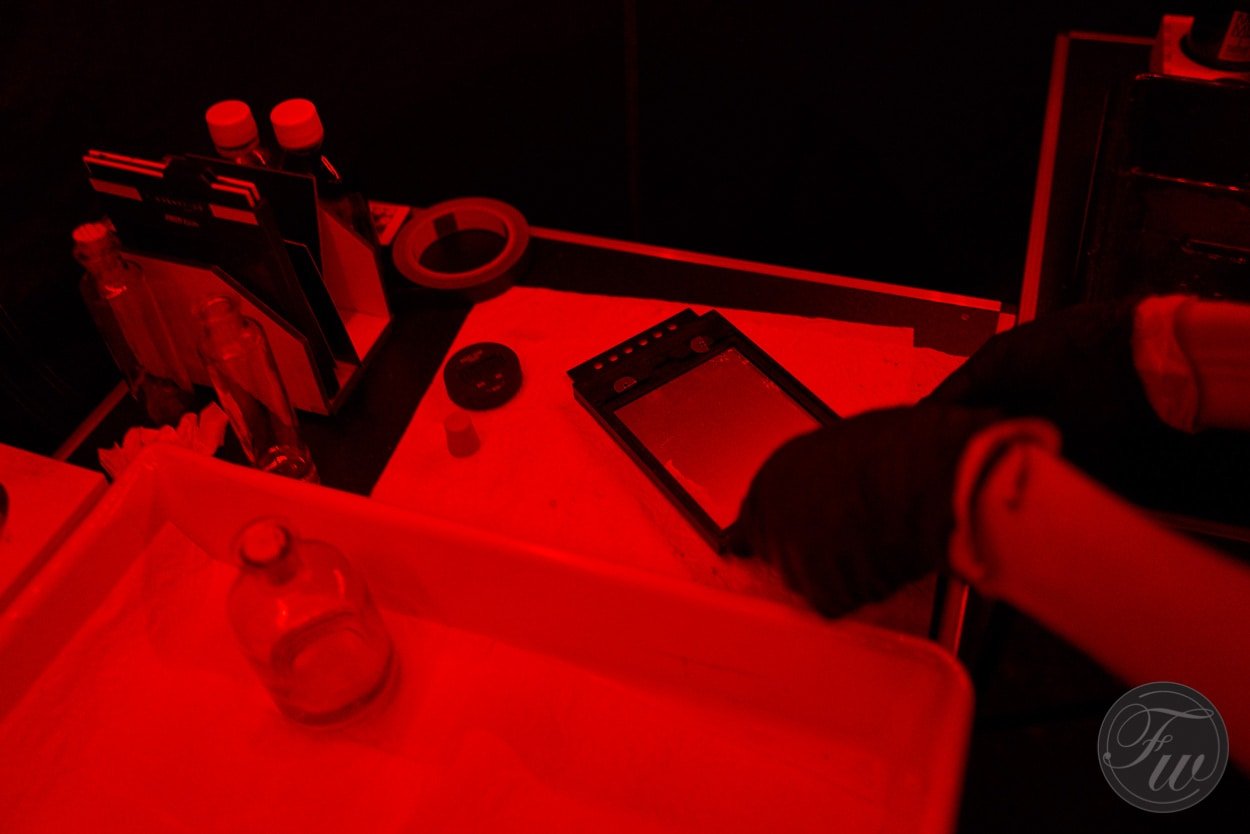 With the plate holder installed into the camera it’s time to do the actual capture. Unlike modern camera’s this takes up to several minutes as the light sensitivity of a wet plate is around 0,5 iso. Even with a lot of light it takes a long time to record the image. So when the shutter is opened the capture begins which is timed with the help of a stopwatch. After the desired exposure time the shutter is closed again pressing the cable release.

Now the plate holder is being closed off from light so it can be transferred back to the darkroom where the image will be further developed. Once taken out of the plate holder, a development liquid is poured over which reveals the image already yet in a negative way. During the next steps the image is rinsed several times during which you can see the image transform into a clear picture. 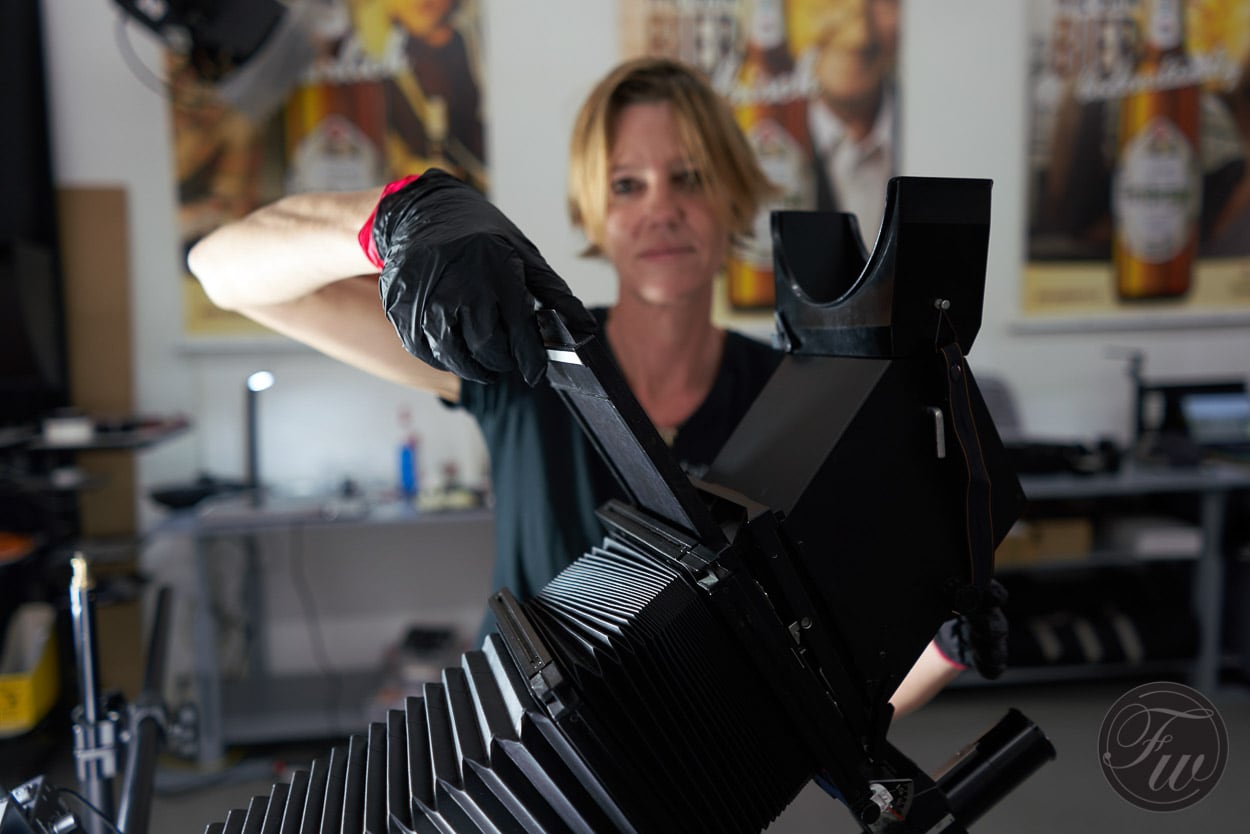 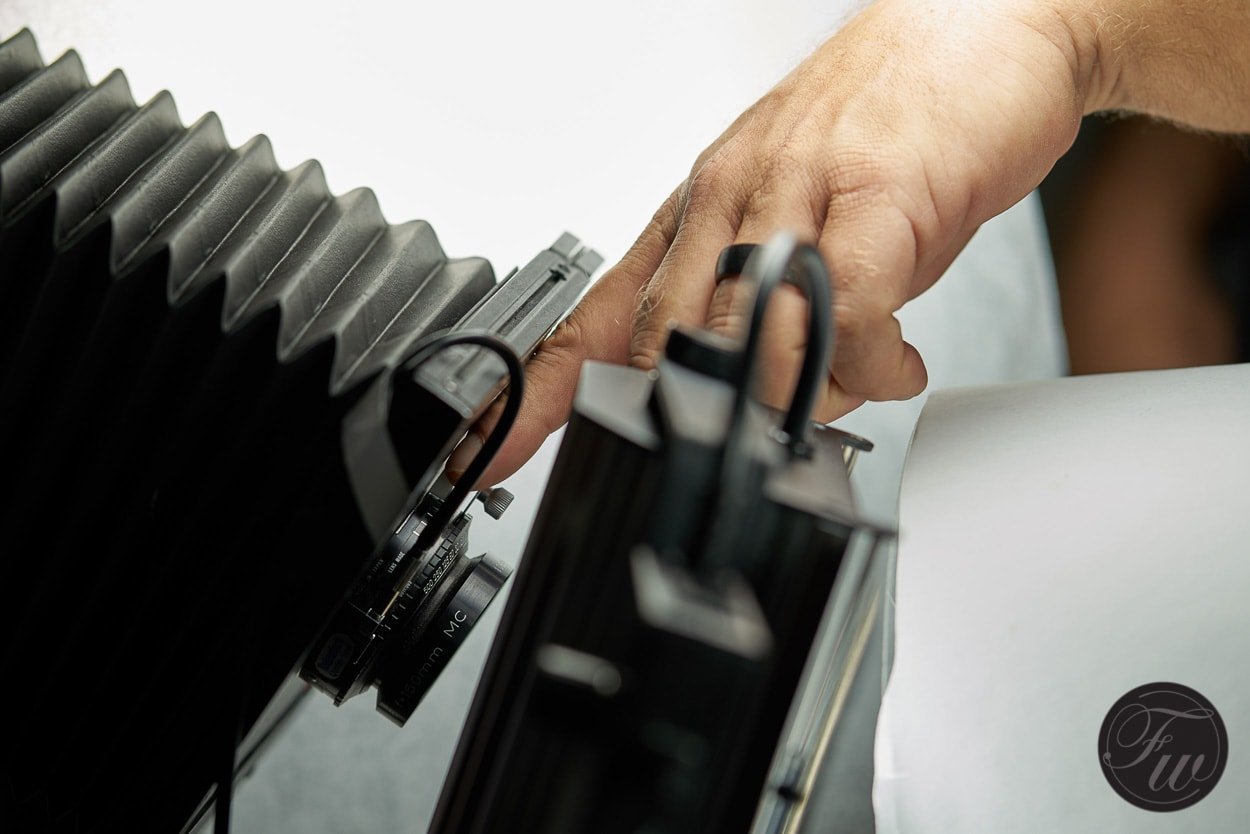 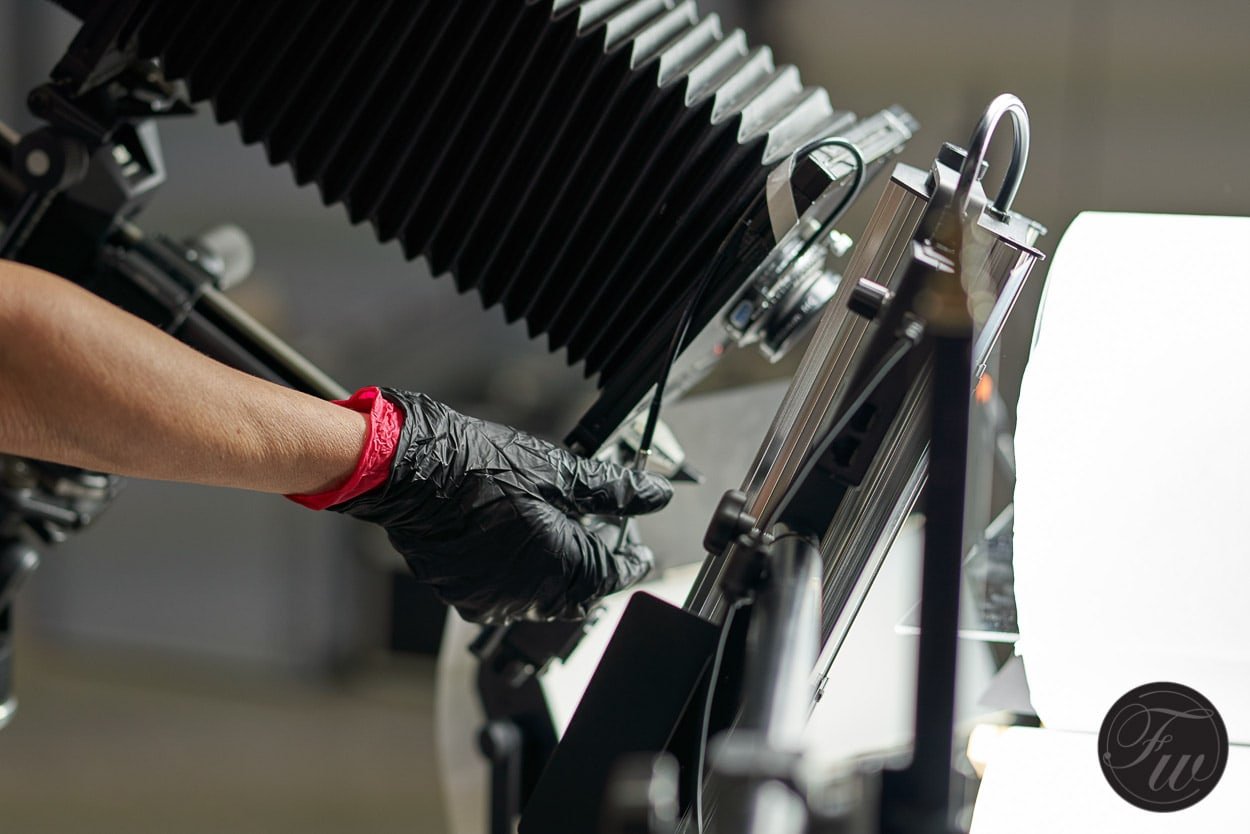 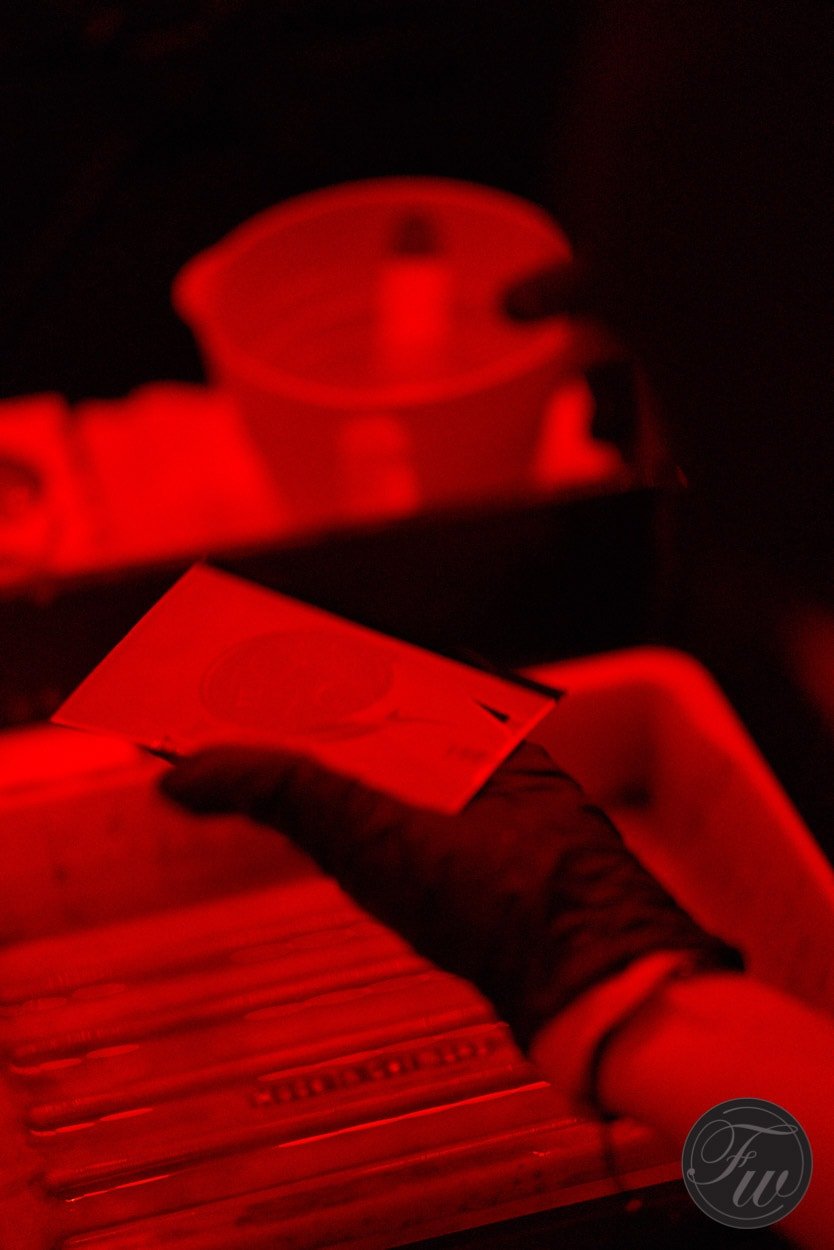 Each of the images taken are inspected and discussed which results in slightly different settings for the next photo. In the end each watch was photographed about 6 times resulting in the perfect final image. Unlike digital images the images are captured in its full glory which means they technically can be enlarged endlessly as they are not limited to a certain amount of pixels. 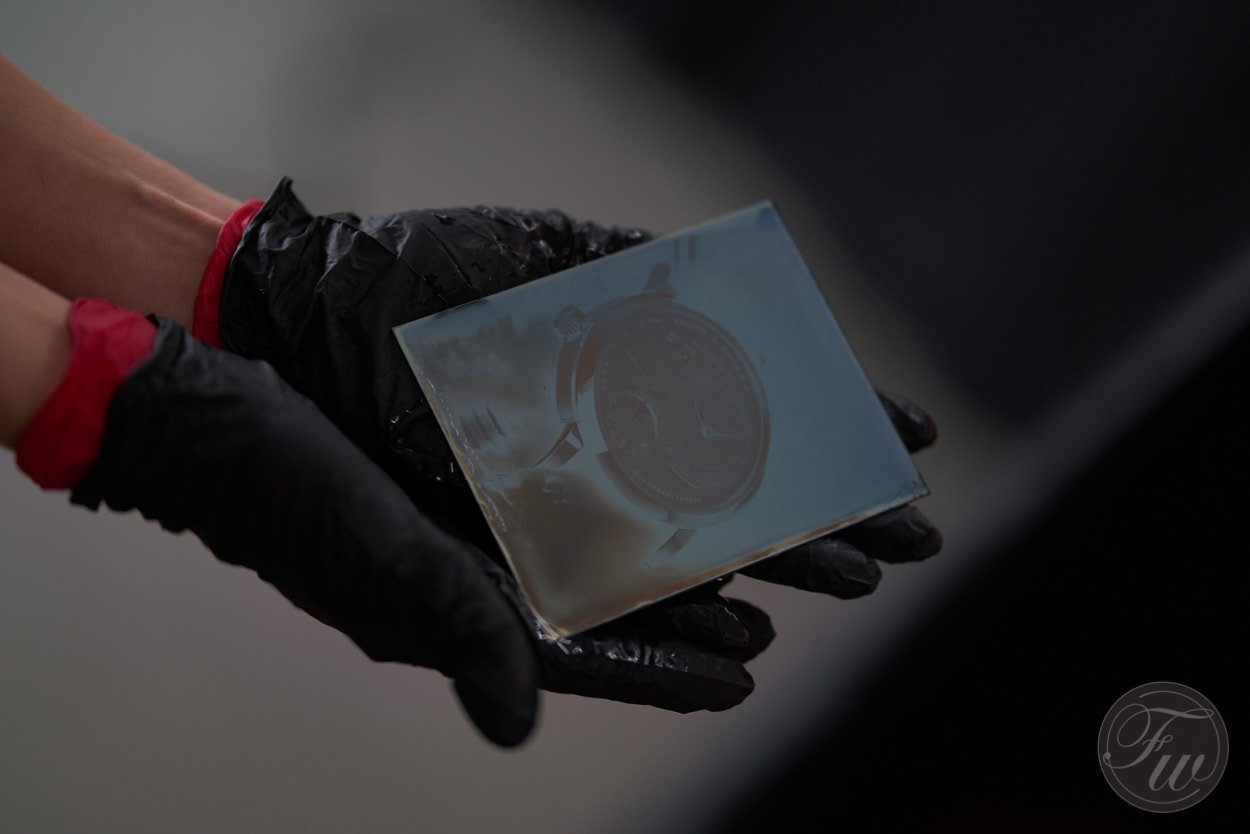 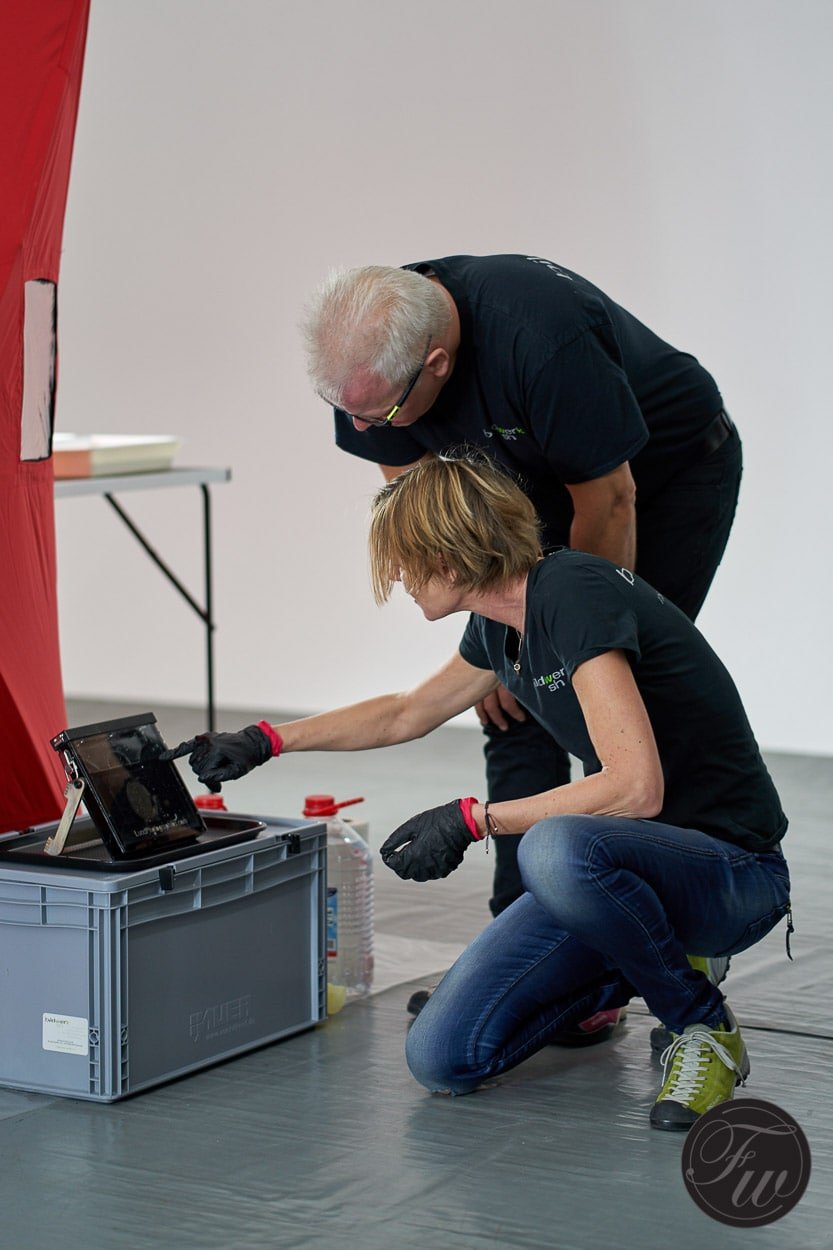 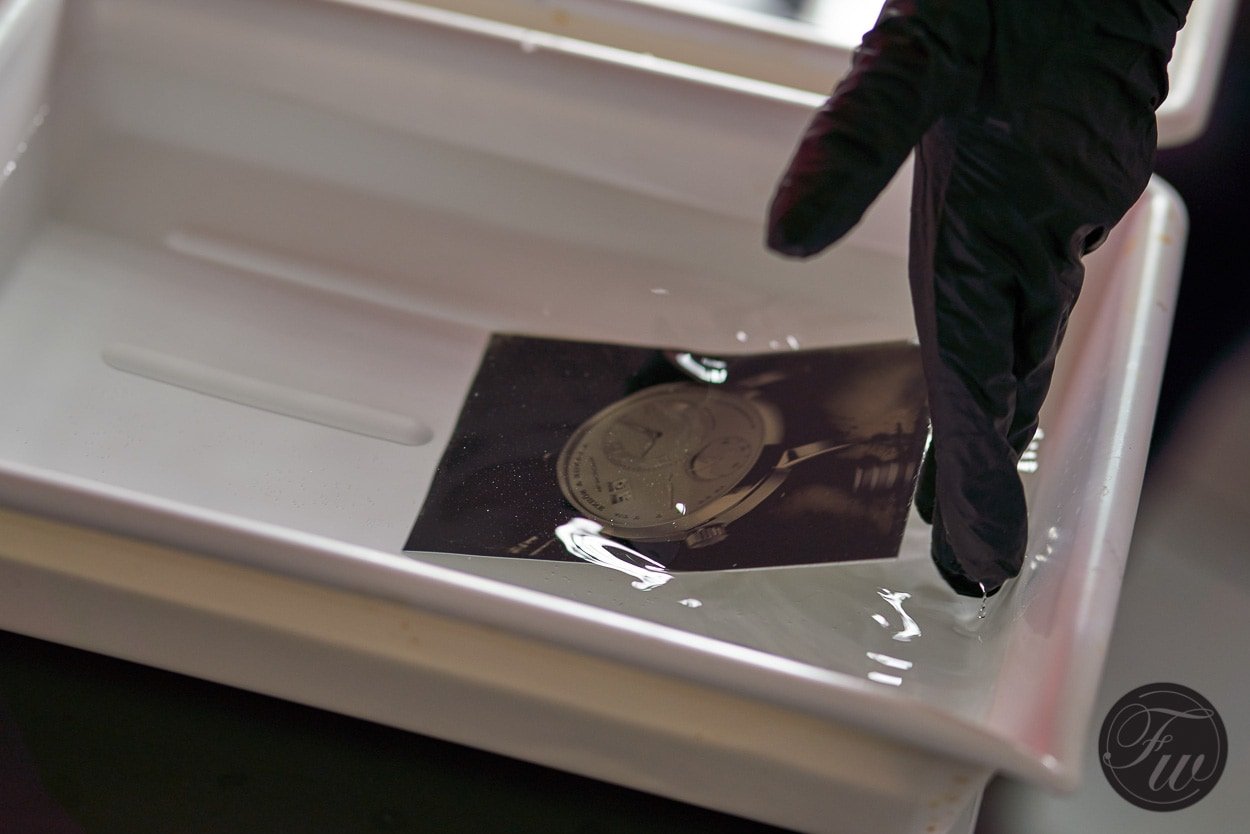 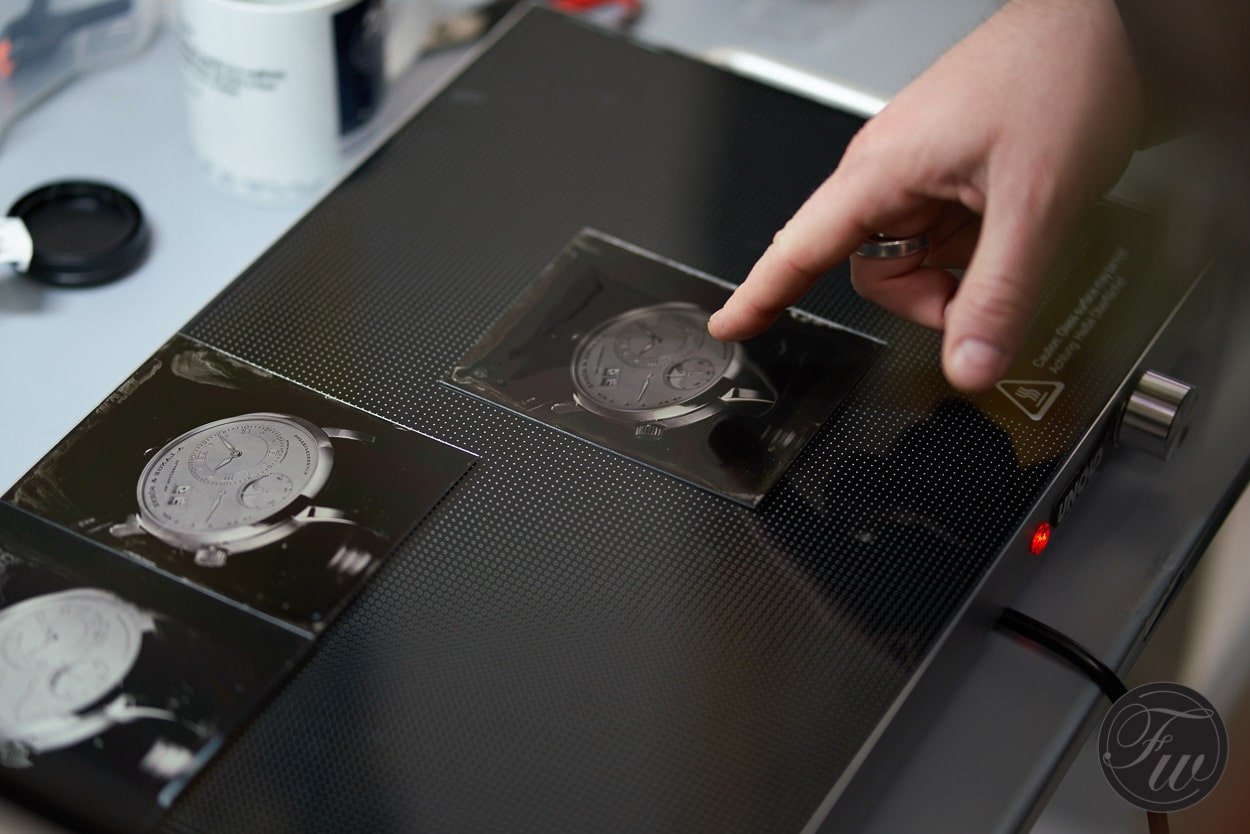 For more information make sure to visit A. Lange & Söhne and check out their social media channels.

Hot Topics
When Sneaker Heads And Time Geeks Team Up — The 11 Most Iconic Sneakers And The Watches That Go With Them
62 comments
A Californian Controversy: The Origins Of The Term “California Dial” And Why It Can Mean Two Very Different Things…
51 comments
What Zenith Is Doing Wrong With Its Pilot Line And How The Brand Could Fix It
34 comments
The Best Omega Watches Of Daniel Craig’s James Bond Era — Have Your Say!
28 comments
Why The Rolex GMT-Master II 16713 “Root Beer” Is Better Than The 126711CHNR “Cough Syrup”
26 comments
Popular
Hands-On With the Seiko Prospex SRPC91K1 – Save The Ocean
Robert-Jan Broer
13
Hands-on: Tudor Black Bay 36 – Like a Comfy Pair of Jeans
Michael Stockton
10
Hands-On: Breitling Navitimer 1 B01 Chronograph In 43mm
Robert-Jan Broer
0