Blancpain Surprises with a Reissue of an Enigmatic Chronograph
Michael Stockton
comments ...
Share

The Blancpain Air Command debuts and reignites interest in a mythical military chronograph meant for the US Air Force.

Well now, it seems that everyone wishes to join in the fun by offering some truly delectable vintage-inspired models.  With the new Blancpain Air Command, the brand steps up in a big way and gives us something that’s hard not to like.  The Air Command looks old and that’s because it’s fashioned – very closely – after an enigmatic chronograph that was apparently built for the US Air Force in the late 1950’s.  Per the lore, and now Blancpain’s literature, less than a dozen prototypes were built and sent to US distributor Allen V. Tornek (yes, that Tornek of Tornek-Rayville fame that built the Fifty Fathoms for the US Navy) before the Air Force scrapped the project.  But the funny thing is that there is no official literature proving the build of these watches.  So, let’s call it not allowing a good-looking watch to get in the way of a…good looking watch. 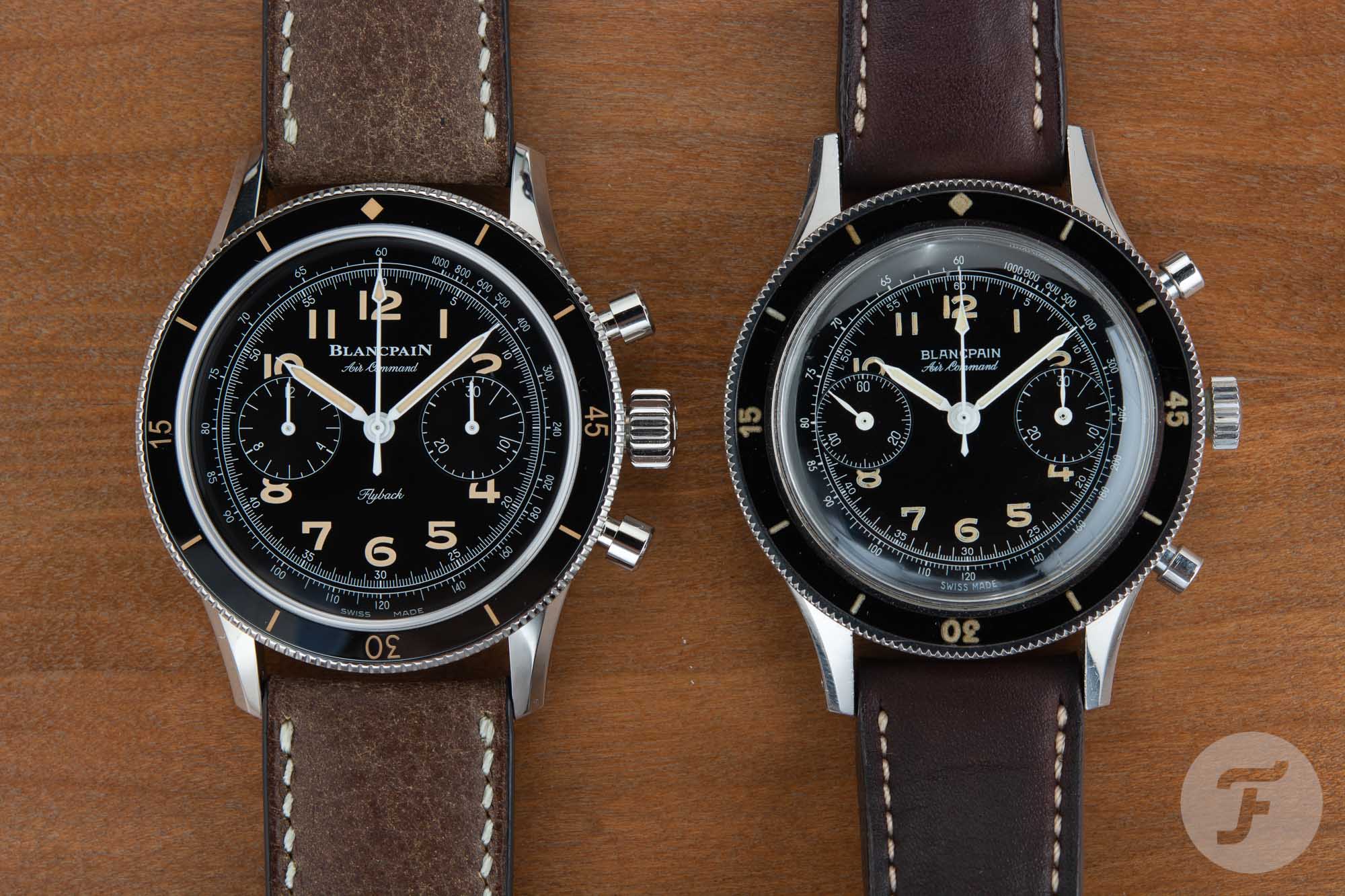 Reissuing a Rare and Controversial Watch

The original Blancpain Air Command is so rare that they’re rarely seen and seldom come up for auction.  In fact, my cursory searching brought me to an example sold hammered by Phillips in May 2016 in Geneva for the sum of – buckle up – 100,000 CHF.  Interestingly, the catalog description from three years ago reads in a similar fashion to the Blancpain introduction.  The older watches contained a 42mm case and were equipped with a flyback, manual wind Valjoux 222 movement.  As you can see, Blancpain had one on hand to photograph alongside the new edition. 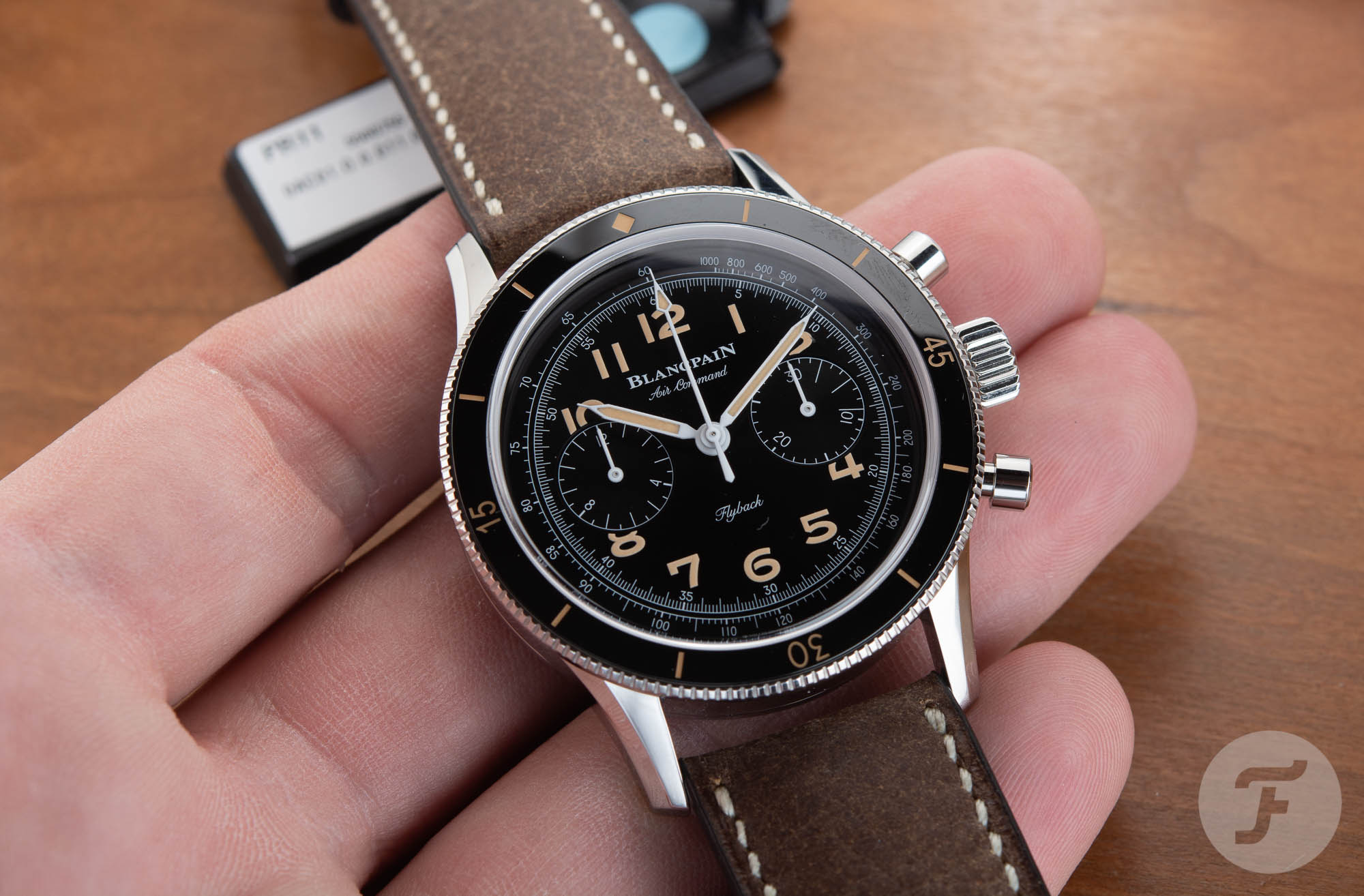 The Blancpain Air Command is Faithful

The new Blancpain Air Command, upon first glance, is nearly spot-on when comparing it to the original model, but there are modern differences.  Its case comes in at roughly the same size (42.5mm in diameter) and the dial and ceramic bezel are designed as near replicas.  The biggest difference is the size of the dial – the new one is clearly larger and Blancpain tells us it was to improve legibility.  The other differences, from what I can tell, come down the Blancpain script where the new version keeps the brand’s current font and other subtle changes such as straight hands, hand length on the sub dials instead of paddle-shaped, and the “Flyback” wording above 6:00.  I also see slightly different hash marks on the sub dials and thinner font on the rotating countdown bezel. 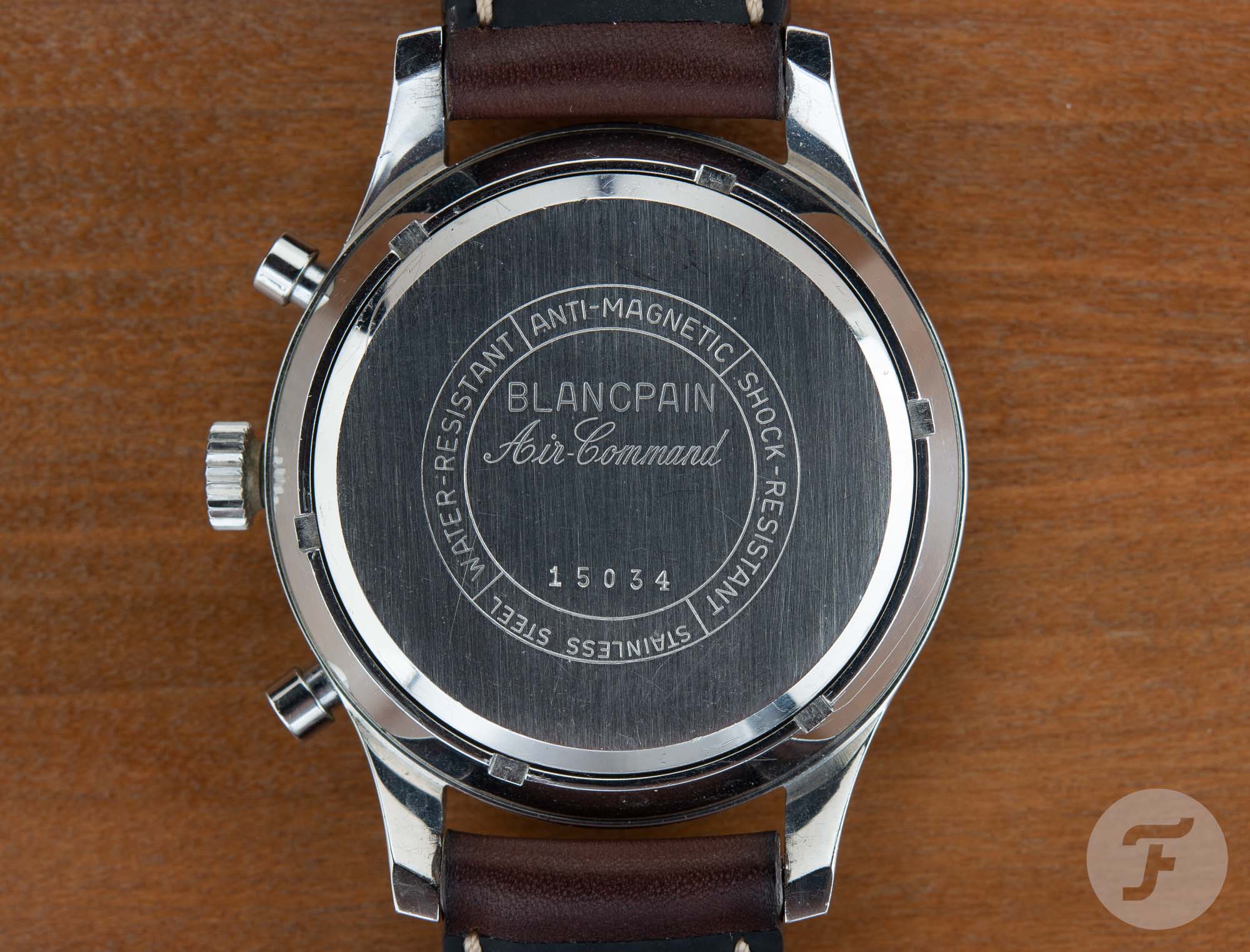 The old version contained a solid screw down case back whereas the new one features a display.  Case wise, the new version drops the drilled through lugs found on the older edition and the newer sports lugs that appear to be slightly thicker. 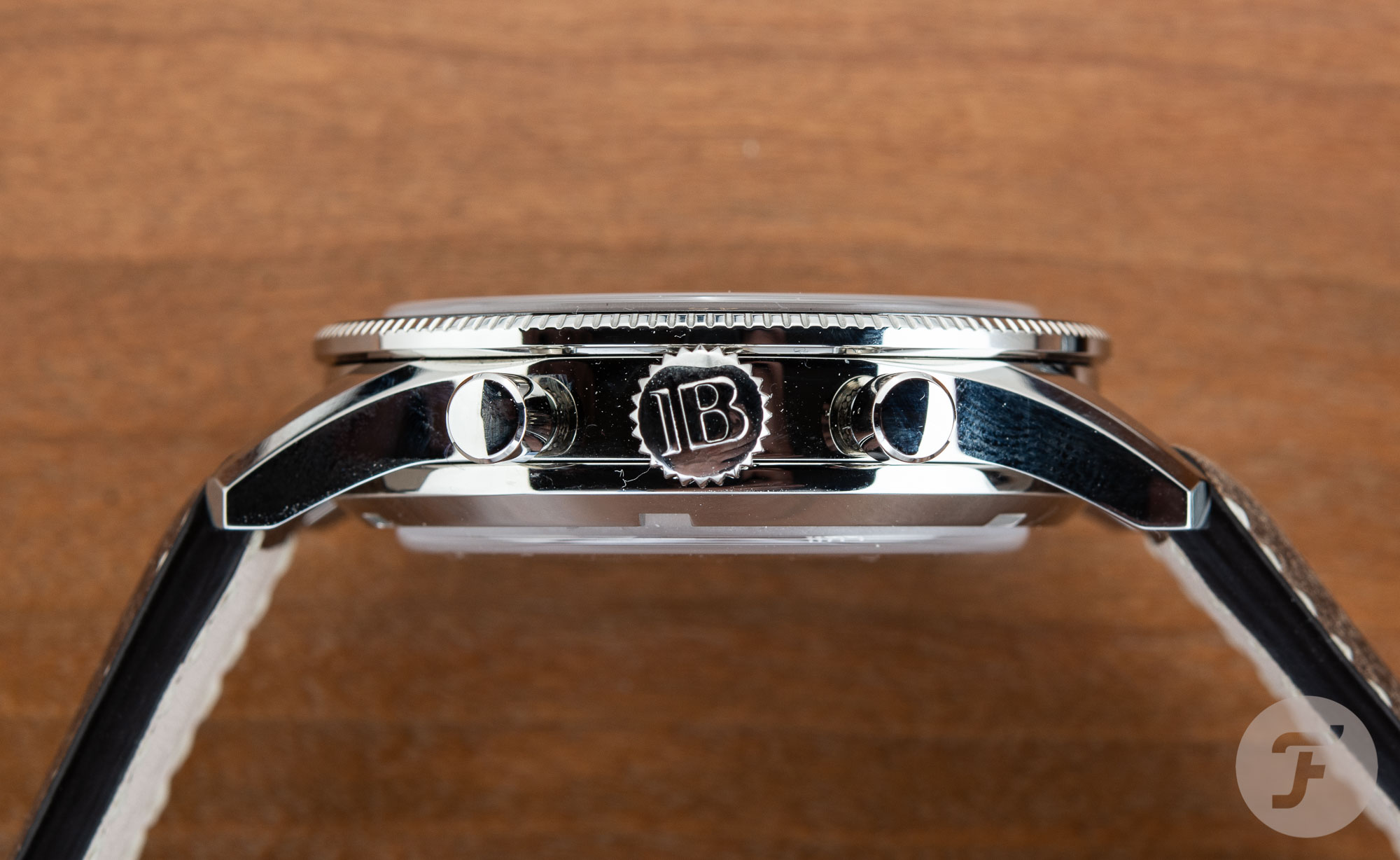 Finally, sapphire is now used on the Blancpain Air Command in lieu of acrylic. 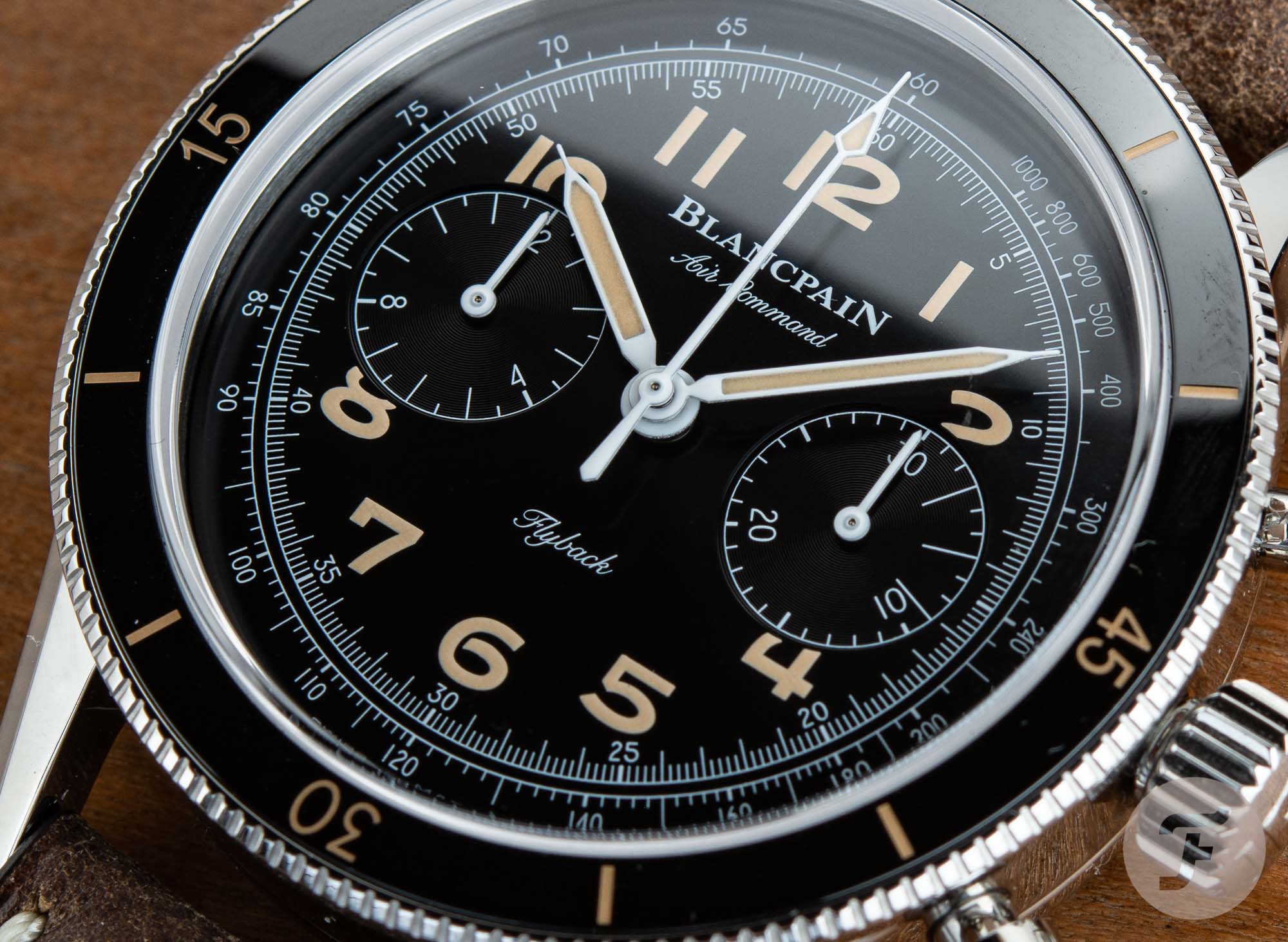 Whatever the differences, the Blancpain Air Command is a lovely watch that brings back looks that harken back to so many 50’s and 60’s chronographs that we know and love.  Some examples are the many Type XX watches made for the military and other civilian pieces such as the Gallet Multichron Pilot and the Zodiac Sea-Chron.  So, needless to say, I really like it and it works on the patinated 22mm brown calf strap.  I’m also asking for pitchforks and other farming tools because I like the use of “old radium” Superluminova on the dial.  Honestly, after seeing the original, this lume color just looks right. 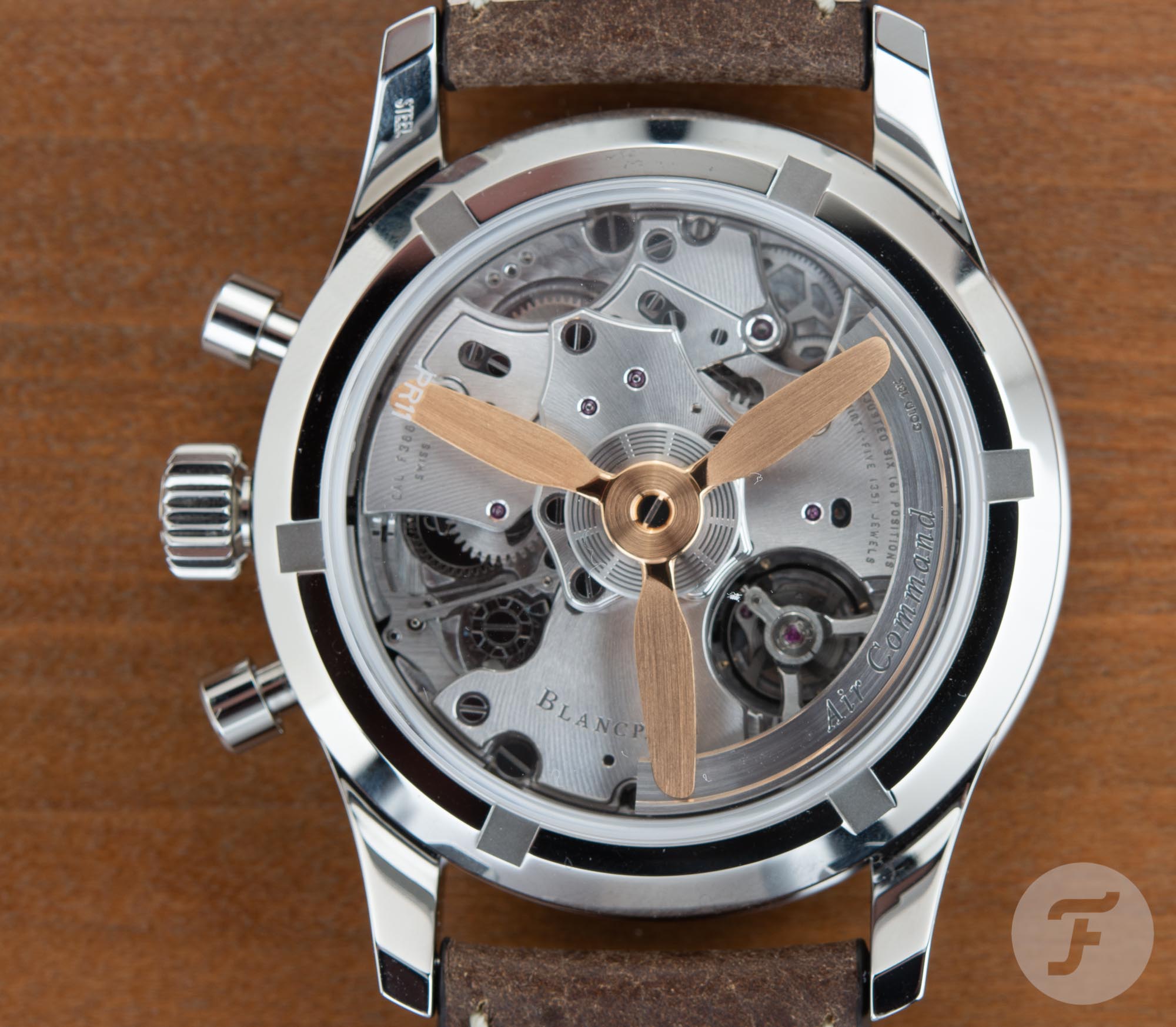 Upon reading about the employ of the automatic, 35-jewel Blancpain F388B flyback movement, I’ll admit some disappointment in the choice to eschew a manual winder.  (Send Breitling a thank-you note for doing the work to engineer one for its 1959 Navitimer; this should you convince you that it was no small chore.). But, one glance at the back of the Blancpain Air Command and it’s hard not to like what you see.  A boxed sapphire crystal (similar to what is on the front side) allows the viewing of the F388 and it’s worth the look.  A cool red gold propeller rotor dominates a nicely finished movement complete with vertical clutch and column wheel.  Plus, this movement runs at 36,000 bph, so that’s a real treat.  The thickness is a reasonable 13.77mm and water resistance is 30 meters. 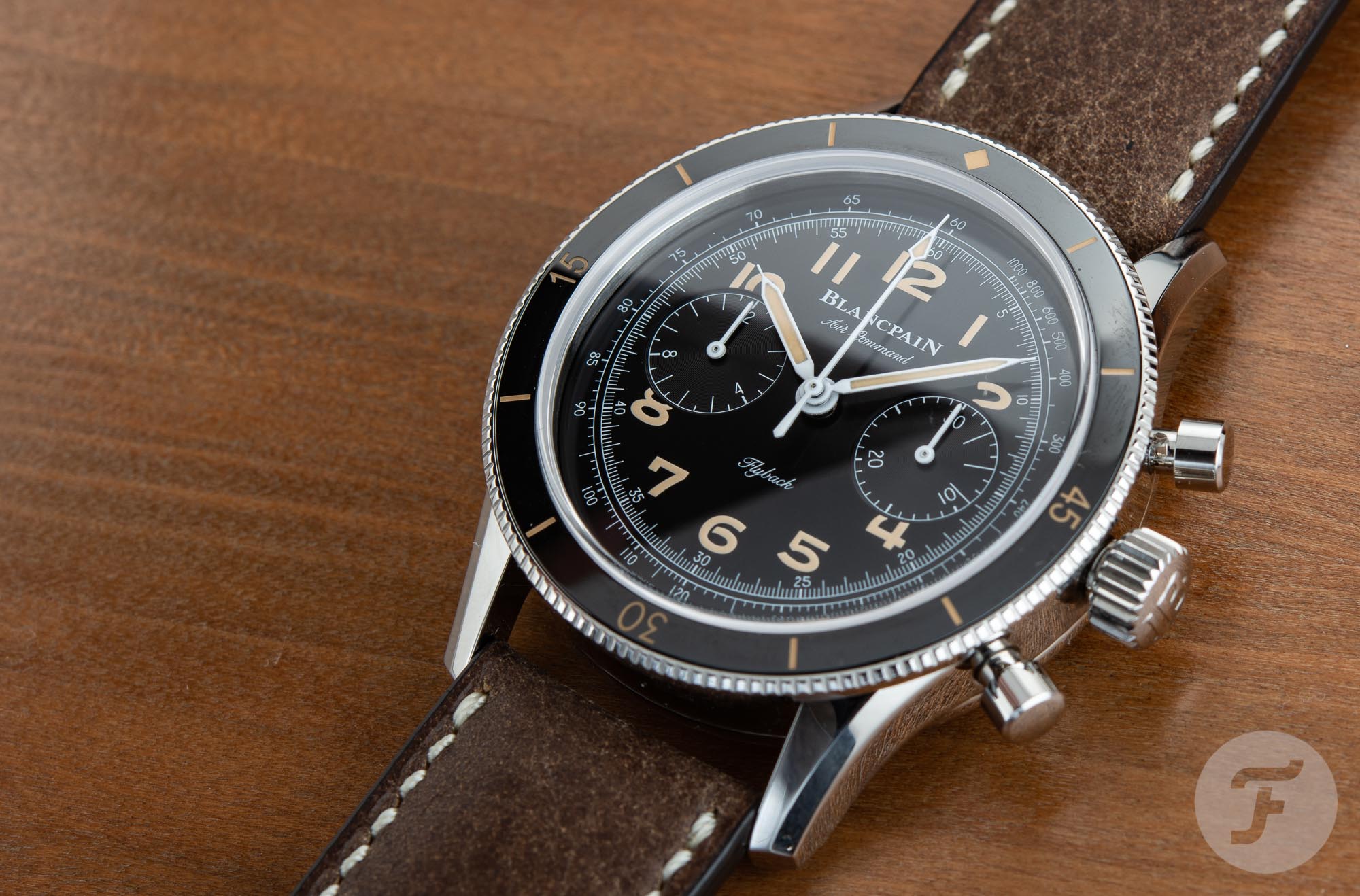 The Blancpain Air Command will not come inexpensively at 18,000 CHF (ex VAT), but it’s not surprising.  When high-end brands (and I consider Blancpain in this realm) do vintage, they tend to be expensive and limited.  Speaking of the latter, only 500 of these will be made and I’d expect them to sell well.  I am sure some will decry the release of yet another back catalog-driven watch, but I say keep them coming provided they’re this good looking and done this well.

Hot Topics
Introducing: The Omega Speedmaster Super Racing With Spirate System
162 comments
Design Vs. Specs — Which Is More Important To You When Buying A Watch?
86 comments
The Time To Buy Is Now: How The Current Economic Climate Influences Watch Buying And How You Should React
51 comments
A Regret-Free Guide To Buying Your First Luxury Watch — Part Three: Higher-End Options From Omega, Rolex, Grand Seiko, And More
48 comments
My Predictions For New Omega Speedmasters In 2023
46 comments
Popular
10 Tips For Better Watch Photography
Bert Buijsrogge
12
Speedy Tuesday – The Original Omega Speedmaster Ultraman
Robert-Jan Broer
7
You Asked Us: Tissot Powermatic 80 Seastar 1000 or Longines HydroConquest
Robert-Jan Broer
20