As I write the latest installment of #TBT somewhere over the Atlantic, looking down at my left wrist, I am constantly reminded of something; there is no justice in the world of vintage watches. I say that because if justice truly prevailed, today’s featured watch would be far more valuable than it is today. I’d be crazy to suggest that watches such as vintage Heuers are overpriced because, as a devout free-market supporter, I believe that consumers speak loudly and freely with their wallets. What I am here to tell you, though, is that there are credible alternatives out there for now that might allow you to keep some of that hard-earned green in said billfold. Without further ado, today’s #TBT focus is the outstanding Gallet Multichron Pilot: let’s take a look. 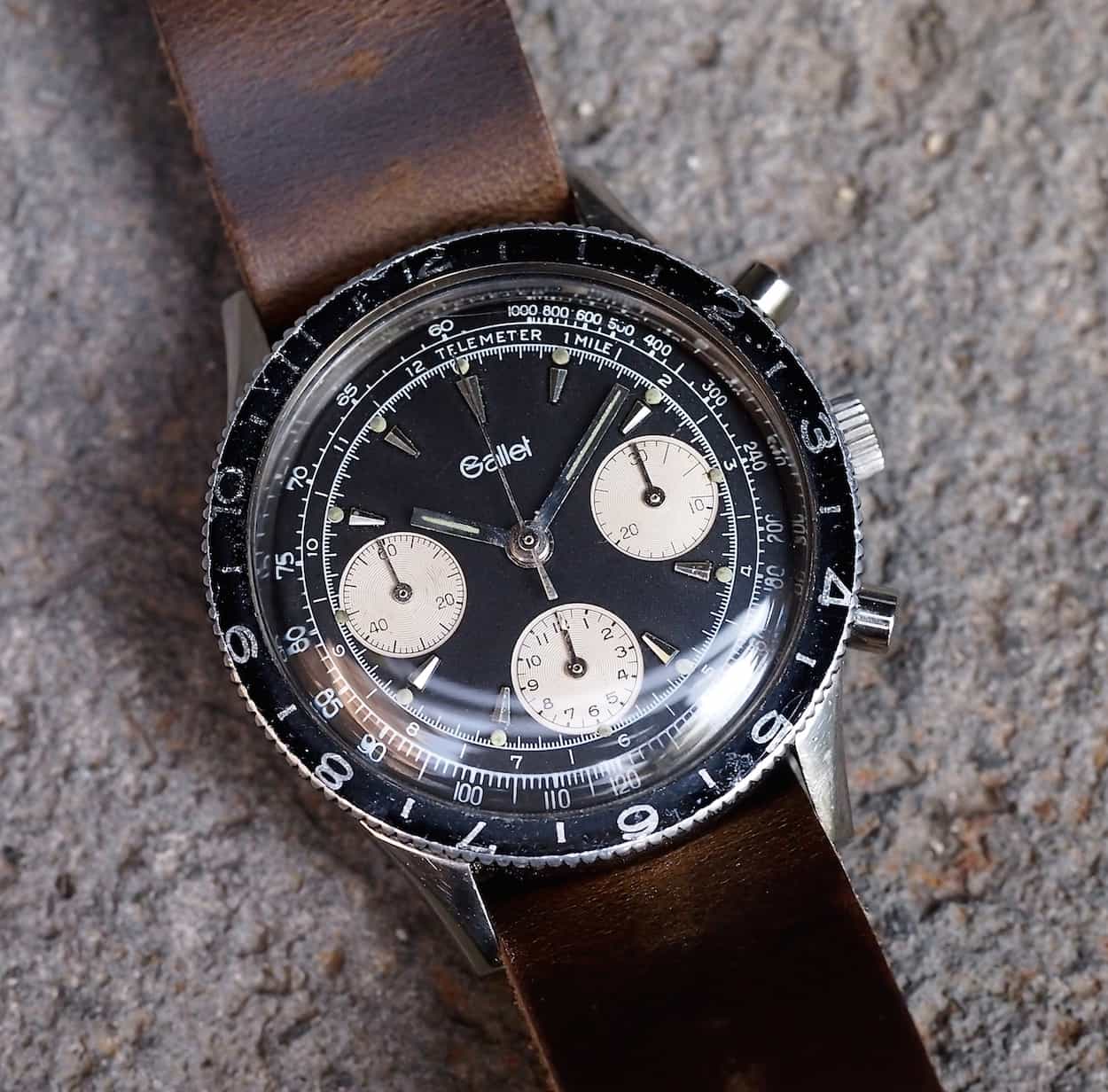 As always, though, before we speak about a specific piece, let’s touch upon some history. Gallet is an old company that was established in the 1400’s. A quick view here shows some of the company’s multiple innovations over the years. I won’t delve very deeply into the entire history, but I will mention a couple things. First off, the company has always had a strong affiliation with aviation and even managed to outfit Amelia Earhart and also fighter pilots during the Second World War. For fans of motor racing, it’s been said that Jim Clark wore a Gallet Multichron during his 1965 Indy 500 win. If you’re not familiar with Jim Clark, we’ll likely focus on him in a forthcoming article, but, needless to say, many consider him to be the greatest racing driver in history. In conclusion, if star power is important to you when considering a vintage watch company, Gallet stacks up well. 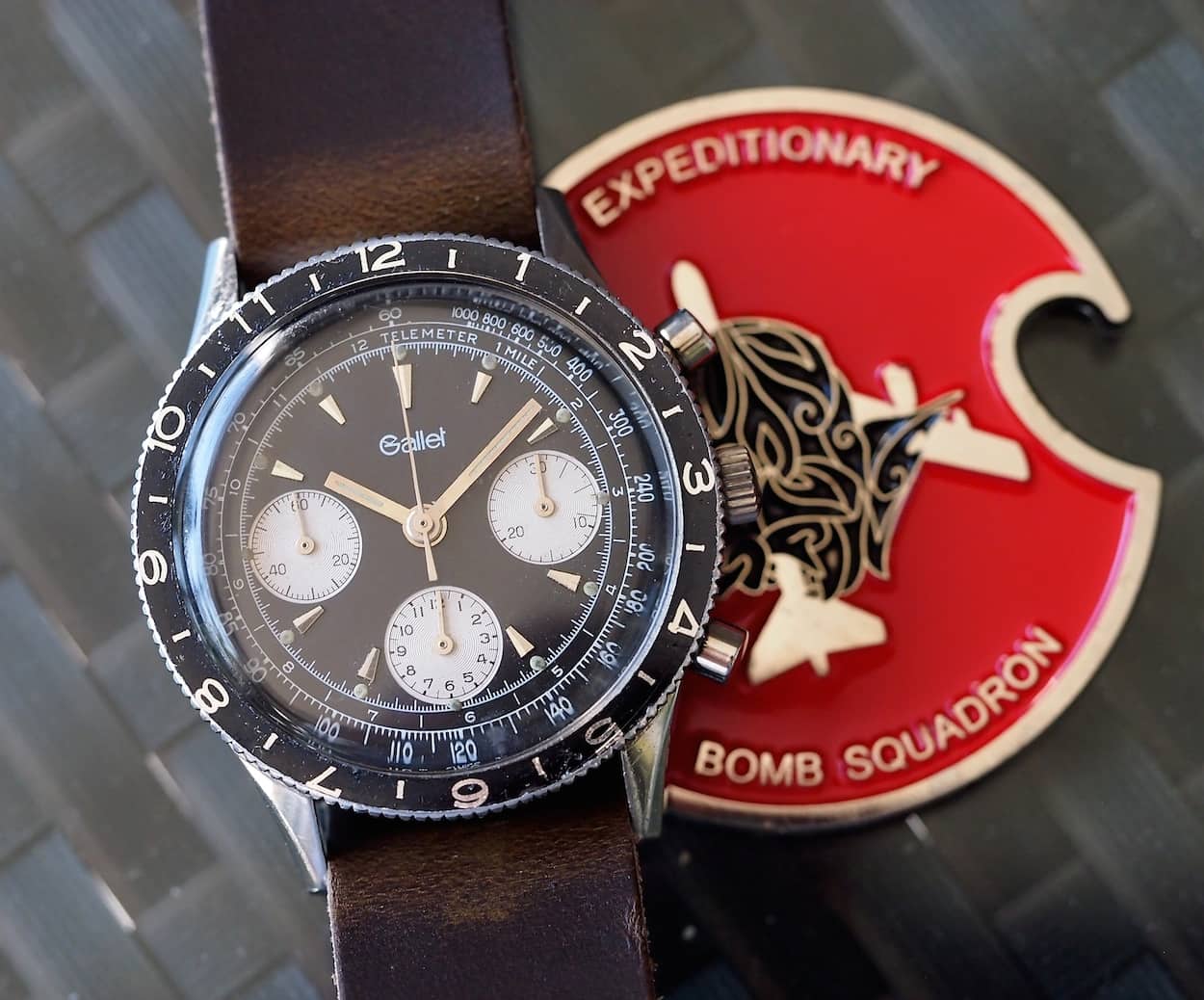 The Gallet Multichron Pilot is a great looking watch. It sports a bold 37mm stainless steel case with rotating 12-hour bezel while carrying delicately chamfered, tapered lugs. The case itself is thick and beefy with its screw-down case back and thick, domed acrylic crystal. The version pictured here today carries a classic reverse panda dial with white registers and a matte black dial. Hands are simple and silver with lume on the hour and minutes sticks. Hour markers are applied, chromed darts with lume pips applied directly to the dial just outside of the markers. As an ode to Gallet’s commitment to both aviation and motorsports, the Pilot includes both a tachymeter and telemeter ring on the dial itself. Further attesting to the Gallet’s sporting attentions, the watch is water resistant to 100 meters. Finally, the tried and true Gallet-signed Valjoux 72 powers this Pilot, although versions are found with the lovely Excelsior Park 40. Just to refresh your memory, the Valjoux 72 can be found in fantastic vintage chronographs such as the Rolex Daytona and Heuer Carrera as well as various other vintage Heuers. 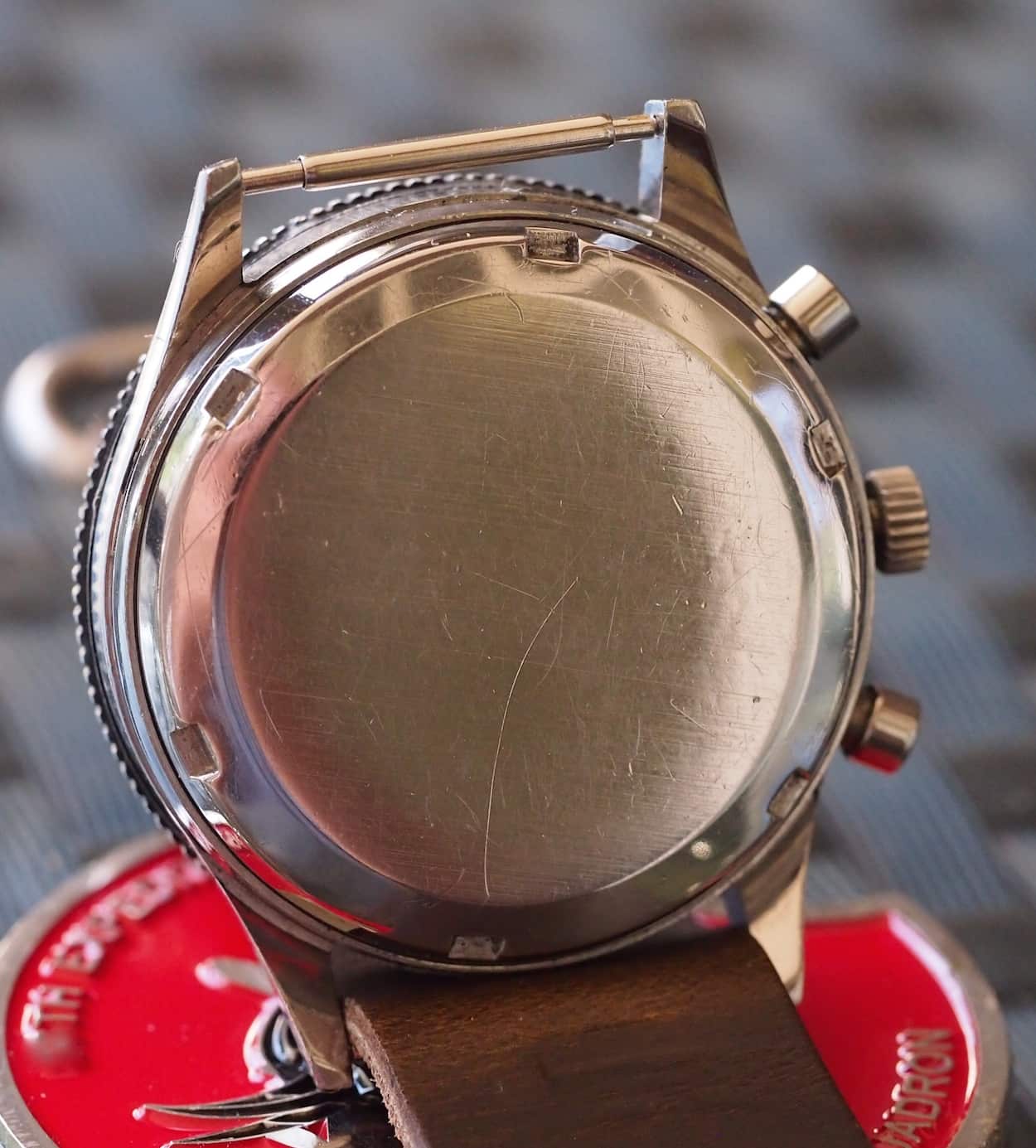 I didn’t know Gallet very well until I started reading some forums and asking some friends about the company. I was impressed by the details on most of the pieces and the movements used. I studied several models such as the Multichron 12 and, particularly, this watch. The Multichron Pilot was made from the late 1960’s up through, amazingly, the mid 1980’s. As mentioned previously, the Valjoux 72 and Excelsior Park 40 were offered and later, the less costly Valjoux 7736. In addition to the reverse panda, a white dial was also on the market. I had decided to focus on a column wheel version and, not long after, a solid and original one came up for sale via a friend. I had it serviced and cleaned before taking delivery and the watch ultimately found its way to my wrist a month or two later. 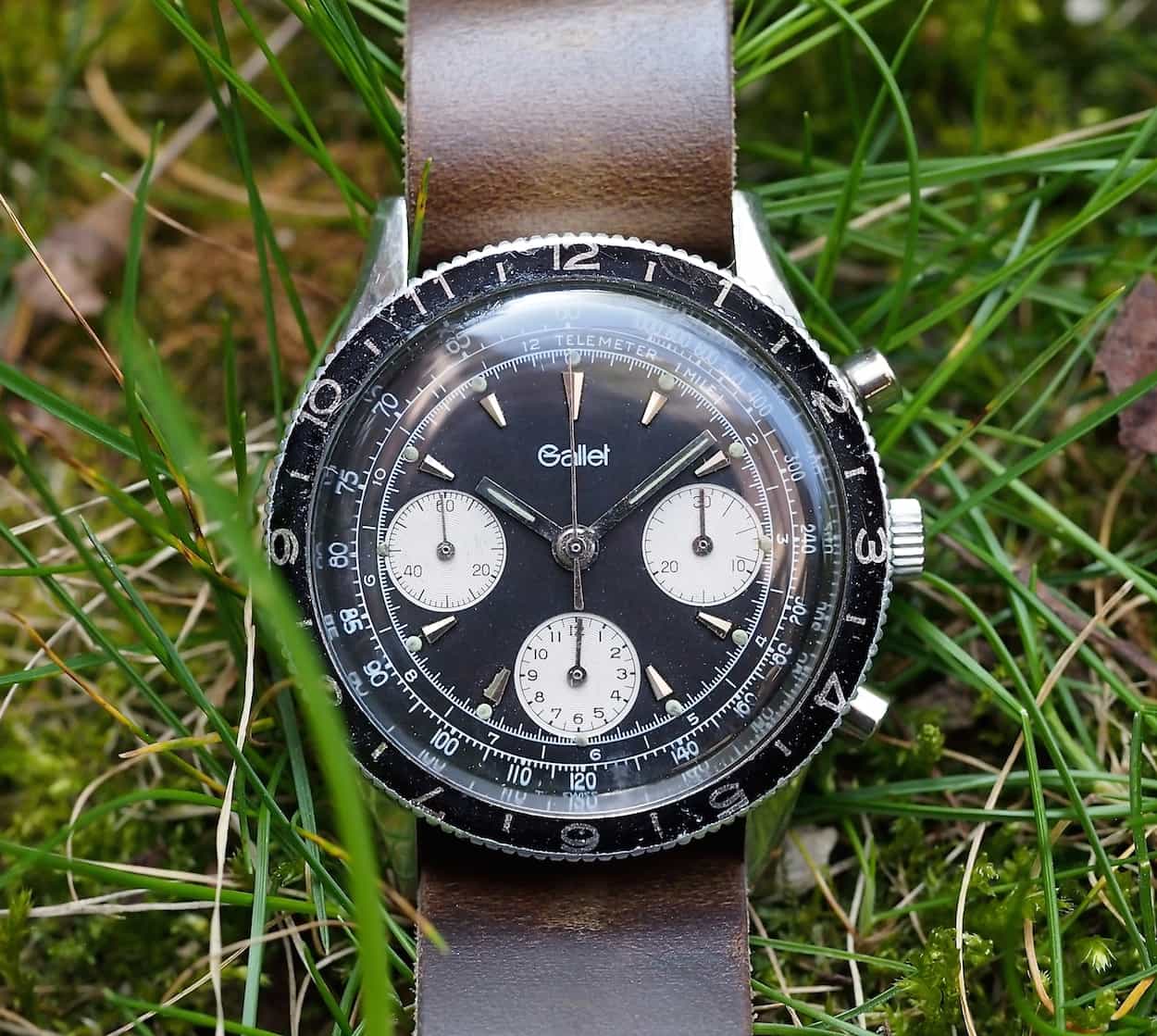 I own a fair number of vintage watches and while I am a much better buyer than seller, I generally like all of the pieces that I have added over the years. The Gallet Multichron Pilot, on the other hand, is part of that top 10% of pieces that I love. The robust size of the watch and its vintage bezel are coupled with well-organized details that sum up a well-designed timepiece. I’ve paired this watch, for the time being, on a Horween single piece 20mm NATO strap from Crown & Buckle. Yes, somewhere the vintage watch Gods have smiled, as 20mm strap options are farm more generous than the typical 19mm on so many vintage chronos. I think it looks fantastic as the leather oils “pull away” where stretched and just adds to the slightly worn vintage look that this actual piece already contains. I’d guess that black or brown minimal leather straps or even perforated rally straps would look great as well. 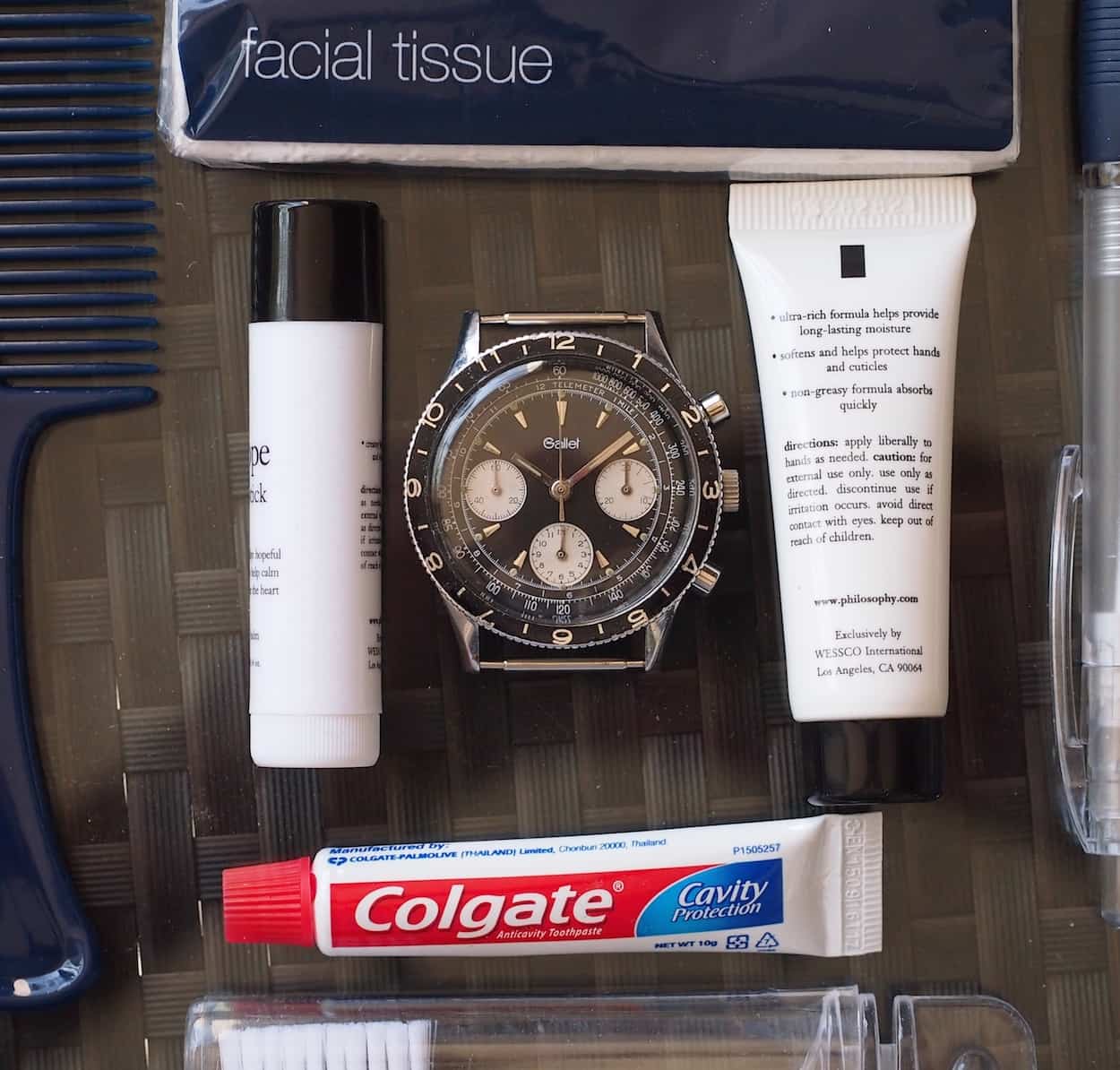 Getting back to why this Gallet sits in my top 10%, the value proposition comes into play as well as a solid reminder of another, more valuable watch. I don’t necessarily like to suggest to readers that buying a watch that shares the looks of another as you’ll likely be left wanting for the original. In this case, though, the attributes of the Multichron alone are strong enough to consider consideration for purchase. So which watch does the Multichron Pilot most closely resemble? To me, it looks a lot like the early, manual wind Heuer Autavias.   Specifically, the Multichron looks a lot like the 2nd and 3rd execution Autavias as they also contain nicely tapered lugs and stick-like hands. The primary differences are a larger case size for the Gallet, different bezel options on the Autavias, and the lack of an internal tachymeter or telemeter ring. Otherwise, the Autavias use an unadjusted Valjoux 72 just as the Gallet. Oh yes, I almost forgot, there’s that annoying issue of price. 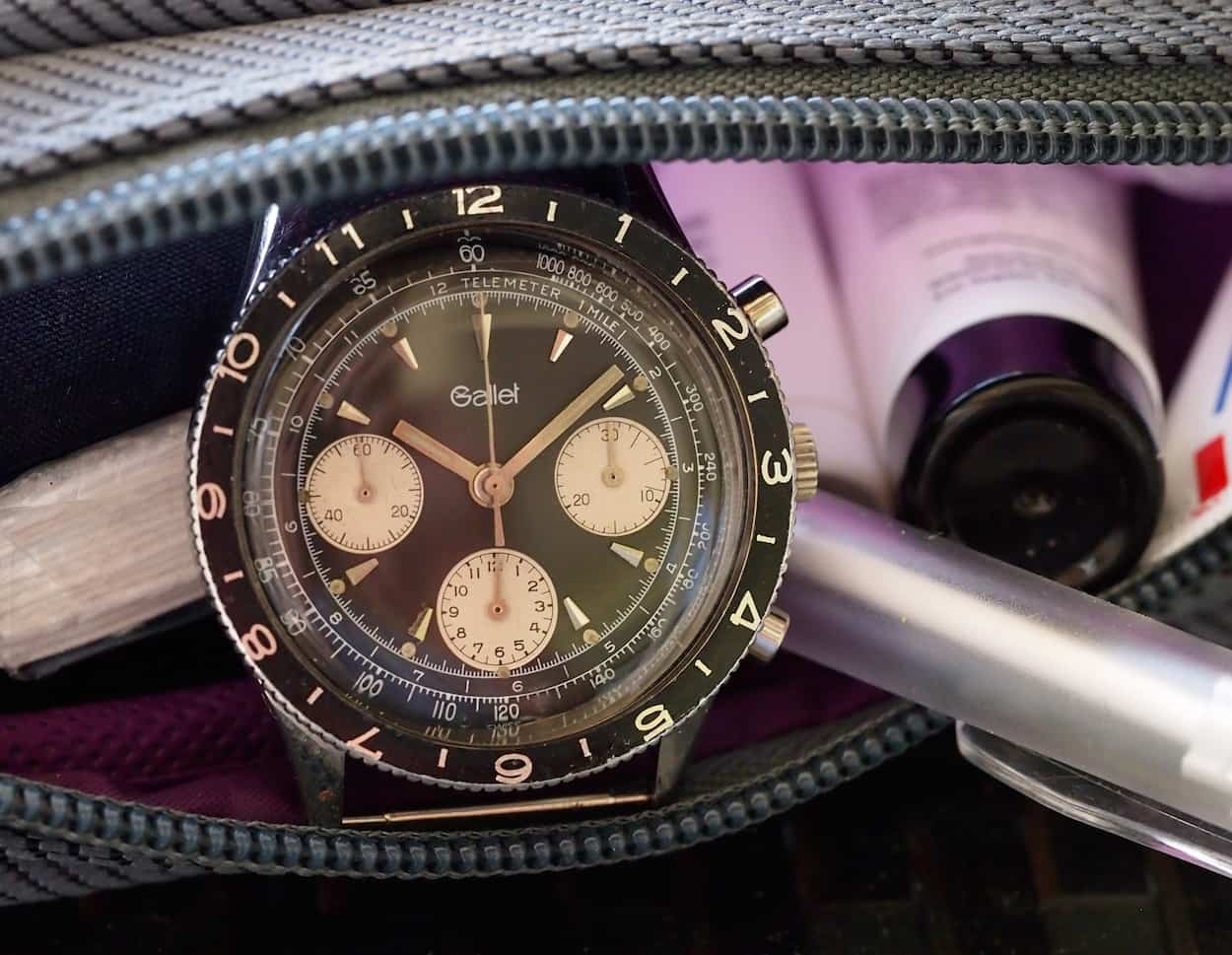 I’ve looked at vintage Autavias and while I’d love to own one at some point, I’ve yet to successfully source a good one at a fair price. Vintage Heuer pricing is nutty to say the least due to the love of motor racing, the good looks of the watches and the general upswing in vintage watch prices. Autavias are no exception and I’ve seen pricing anywhere from the $4,000 to 9,000 range depending on execution and seller audacity. The other thing I’ve noticed with vintage Heuers as of late, and listed pricing is no indicator, are an increasing number of pieces being sold as original when they’re not or unpolished when they have clearly seen the wheel. So, yes, battlefield Heuer is a popular and often mine-ridden playing field. Thankfully, the search game for Gallets is a bit safer for the moment. 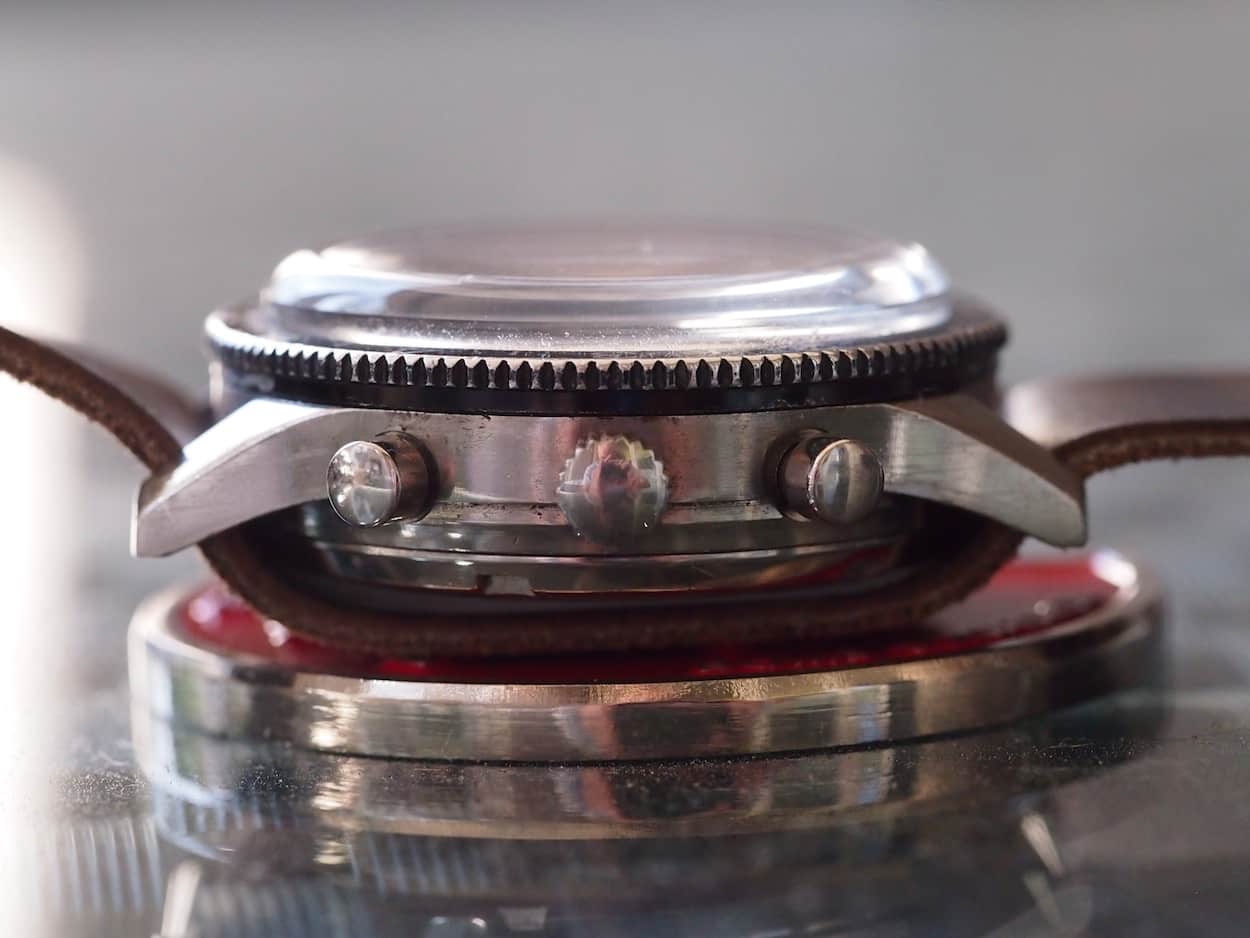 When searching for Gallet Multichron Pilots, pricing seems to hover around the $2,000 to 3,000 realm but I’ve seen several listed recently for just south of $4,000. While doctored pieces are out there, the positive of looking for watches that have only recently gained in popularity is that original pieces seem to be more prevalent. Good, honest examples are out there and seem to come up on forums and eBay every few weeks or month. I recommend joining a great forum such as chronocentric to ask questions should find a possible specimen. 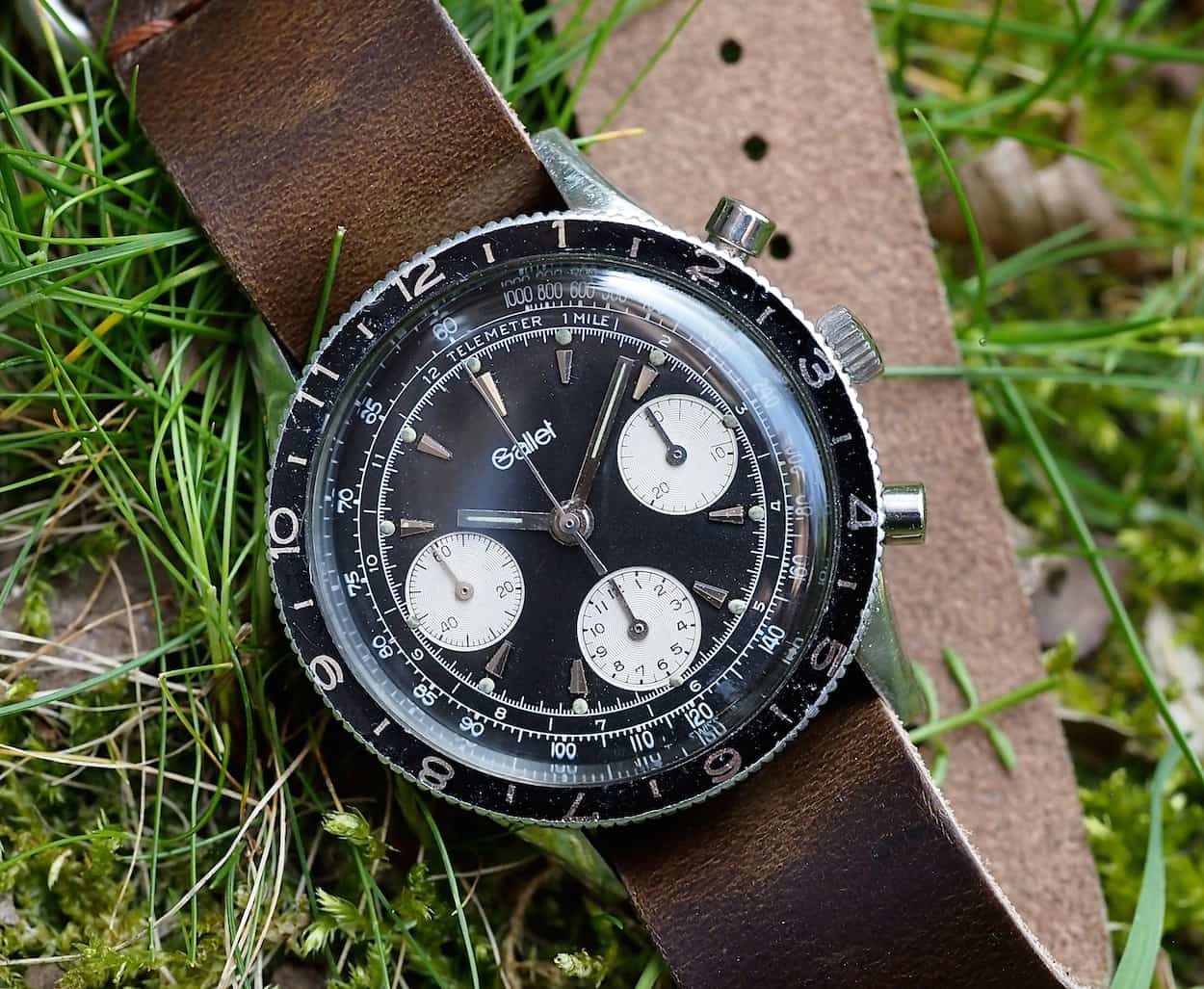 While I realize that this week’s article isn’t about an affordable vintage watch, it is at least pertaining to a more affordable, yet no less credible, option when considering a racing or aviation inspired chronograph. Gallet made some truly collectible chronographs and like most good-looking vintage chronographs, expect pricing to increase as more people discover them. As always, enjoy the hunt and don’t forget to ask questions before buying!