Hands-On: The Breguet Tradition 7097 Watch Is A Costume Drama On The Wrist

The montre de souscription, or “subscription watch”, presented by Abraham-Louis Breguet in 1796, was not only a pocket watch but also a brilliant conceptual idea. Produced upon registration and fitted with a robust, relatively easy-to-manufacture movement, this pocket watch responded perfectly to the capricious market during post-revolutionary times. And the Breguet Tradition 7097 Automatique Seconde Rétrograde I wore on my wrist is reminiscent of those turbulent times. This watch is like a mechanical costume drama and an action movie combined.

The stage is Paris. Of course, Abraham-Louis Breguet (1747-1823) was Swiss. He was, after all, born in Neuchâtel. But his parents were French refugees, and Breguet was actually very much a veritable Parisien.

… in the French capital he felt at home, celebrated successes, almost fell victim to the French Revolution …

Here in the French capital he felt at home, celebrated successes, and almost fell victim to the French Revolution that made him flee back to his native soil, only to return later. He did so not only to resume his work but also because Paris was his home. Here, in the city where scientists, artists, and philosophers inspired each other, he constructed his watchmaking inventions. In Paris, he also networked tirelessly as a marketing genius avant la lettre. 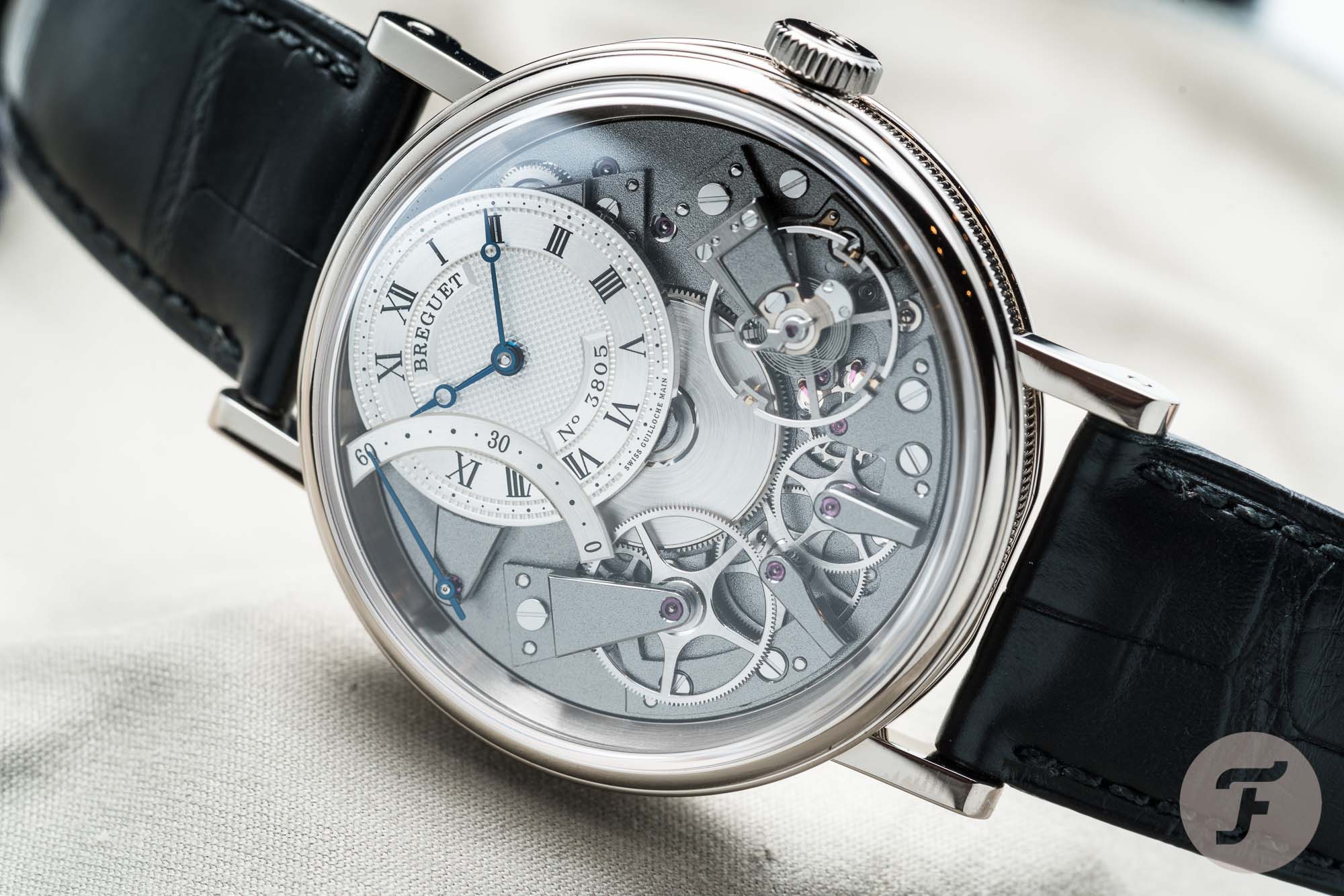 The story of the close connection between Breguet and Paris starts in 1775. It is that year that Abraham-Louis sets up shop as a watchmaker at the Quai de l’Horloge 39, near the Place Dauphine on the Île de la Cité, the island in the center of the French capital. And there, near the legendary Pont Neuf, his work draws attention thanks to its superior qualities. His pocket watches and clocks know no precedent when it comes to precision, design, and finish. In this way, he comes to the attention of the wealthy nobility who become his customers. 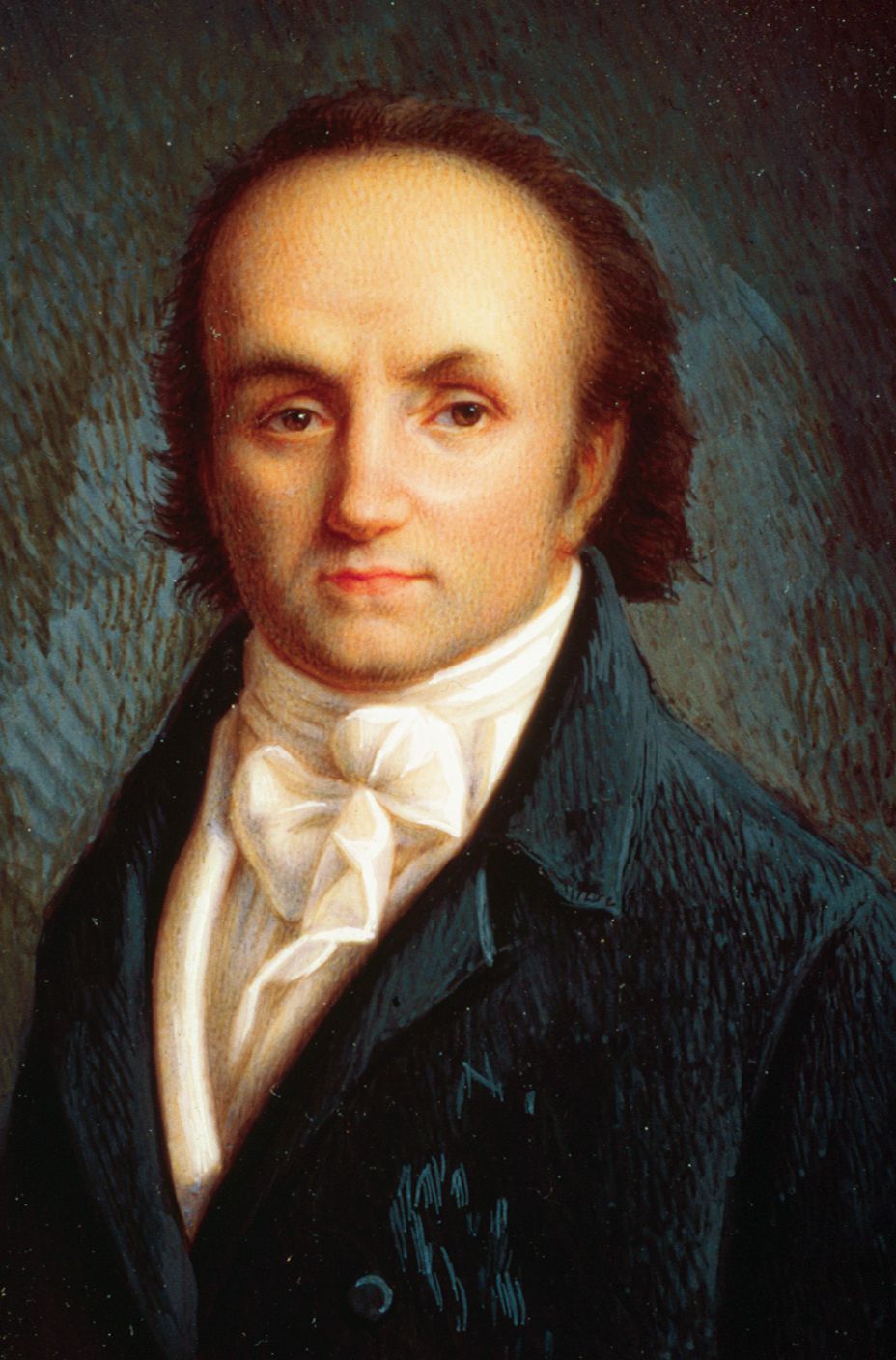 “What he did was completely new,” Emmanuel Breguet, Vice President and Head of Patrimony & Marketing of the brand, told me back in July 2020, when I visited the small but charming Breguet museum in the brand’s boutique on Place Vendôme. “When you look at some pocket watches from that time we have on display here, you notice the long and slender hands. They lack the typical Baroque style of that era. The lack of rich regalia was radically new for the period. Breguet introduced a completely new aesthetic. By rotating the slim hands over a white dial, he created clarity, space, and light and that was completely revolutionary.” 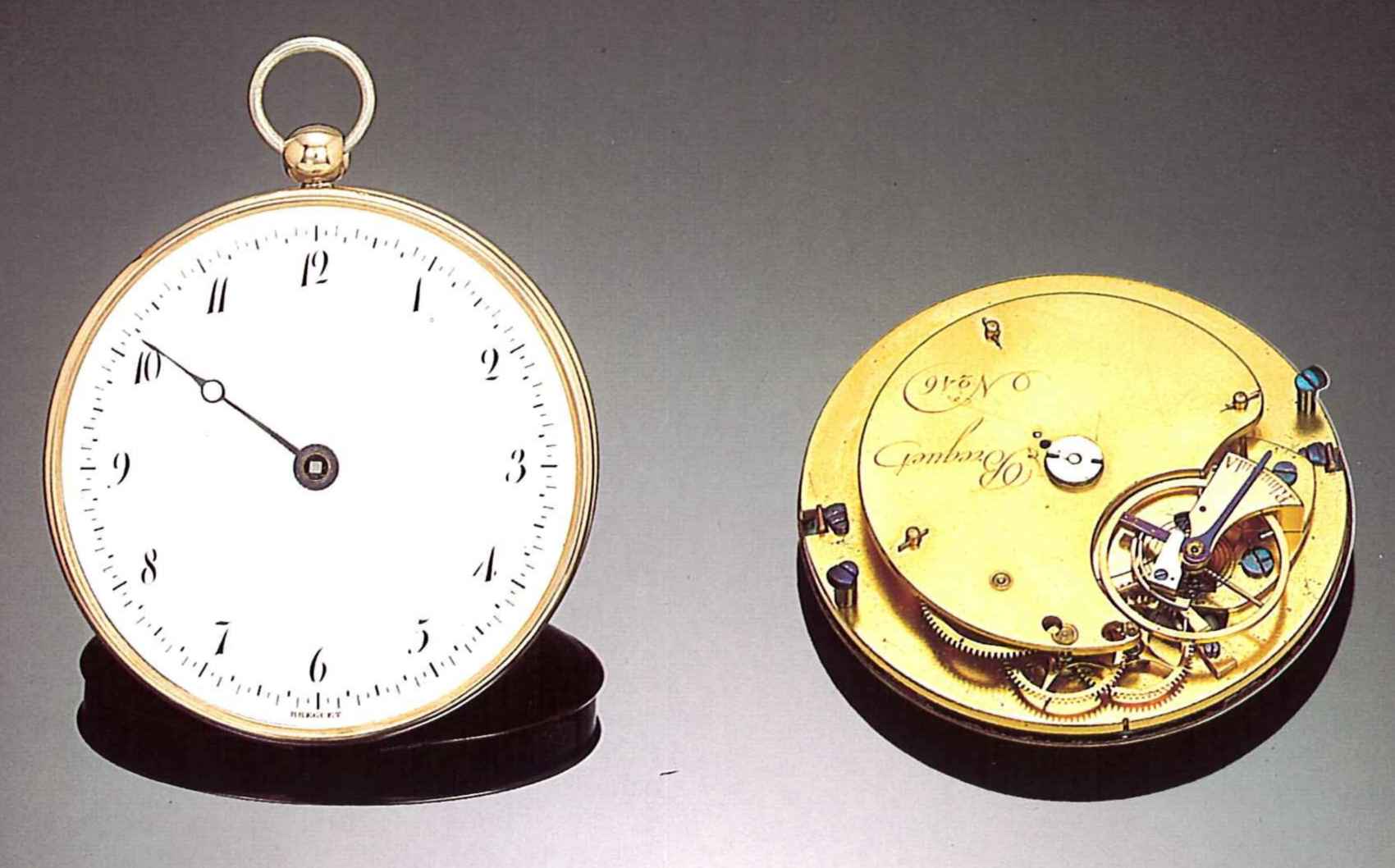 Montre de souscription no 246 sold on January 9, 1798 to monsieur Durbach

Abraham-Louis Breguet himself was not a revolutionary. His customers before the French Revolution of 1789 belonged to the ruling class and came from mostly noble families. But the incredible inequality in the country made Breguet sympathetic to the progressive political ideas that were gaining ground in France at the time. That’s why he joined the Jacobins, a group led by the radical Jean-Paul Marat. He already knew Marat through his sister, who thought him wiser. The lives of Marat and Breguet would become intertwined as if a plot taken straight from an action movie. 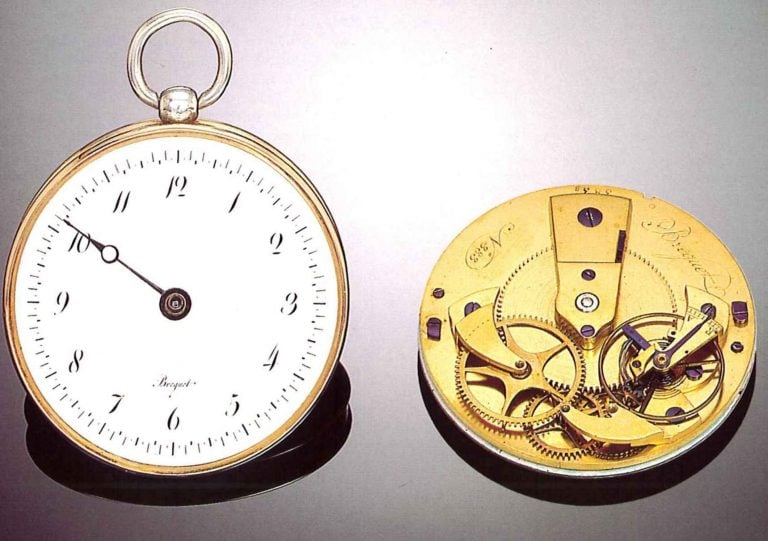 Paris in 1789 is a maelstrom of political unrest that will engulf many lives for the next decade. When the two men visit a mutual acquaintance in April 1793, a royalist mob gathers outside, demanding the head of the radical Marat. He’s stuck, if not for the genius Breguet. He dresses Marat up as a woman, complete with a powdered face and ruddy cheeks. They wait until nightfall and then very calmly walk out arm-in-arm, blending into the crowd before Marat makes his way to safety. 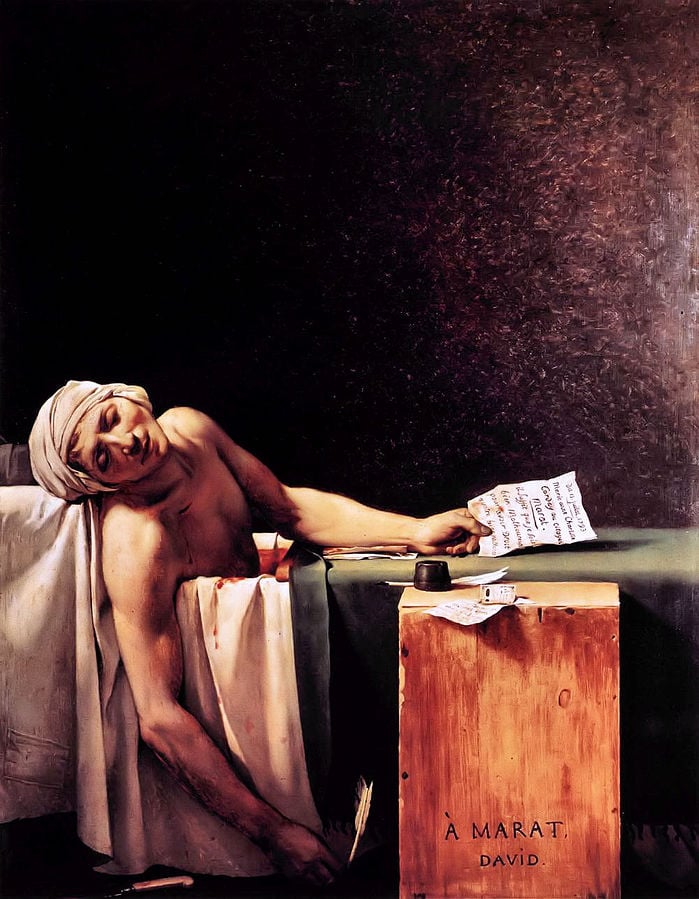 “The Death of Marat” painted by Jacques-Louis David in 1793

Two months later, it is the revolutionary who rescues the watchmaker from distress. When Marat learns that Breguet has been put on a death list by the Revolutionary Committee — in part because he was a purveyor to King Louis XVI — he urges him to leave France. He arranges safe conduct for Breguet and his son to cross the Swiss border. It’s the last time the watchmaker sees his friend. Later that year, Marat is stabbed to death in his bathtub, an event captured forever in Jacques-Louis David’s famous neoclassical painting. Because of his escape, Breguet is convicted as a traitor. The Public Safety Committee confiscates his home and studio and even kills one of his employees. His tools are destroyed. “The Terror” reigns in blood. 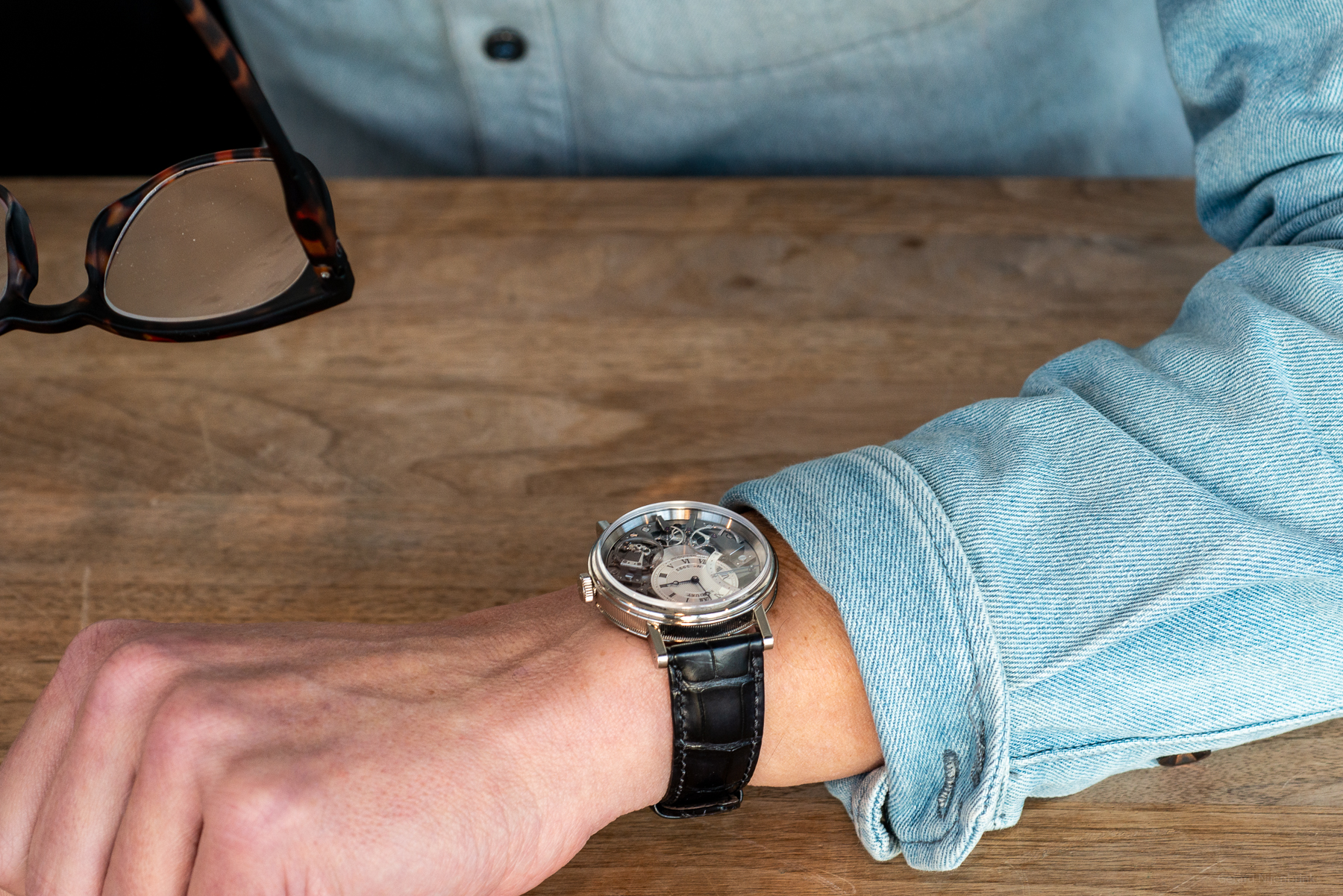 The exile in Switzerland is a tough period for Breguet. He worries about his employees, his house, and his atelier. And although his friends who have fled to London beg him not to return to the still unstable city and instead come to England, he nevertheless returns to Paris in 1795.

The Terror had decimated the aristocracy, Breguet’s most important customer group.

Determined and fearless, he demands his house back and even receives help from the new government to restore his atelier on the Quai de l’Horloge. But the city is both emotionally and economically a total wreck. The Terror had decimated the aristocracy, Breguet’s most significant customer group. In its place, however, new social classes were forming. This wealthy bourgeoisie, together with the new Napoleonic aristocracy, became Breguet’s new customers — the term nouveau riche never sounded more appropriate. 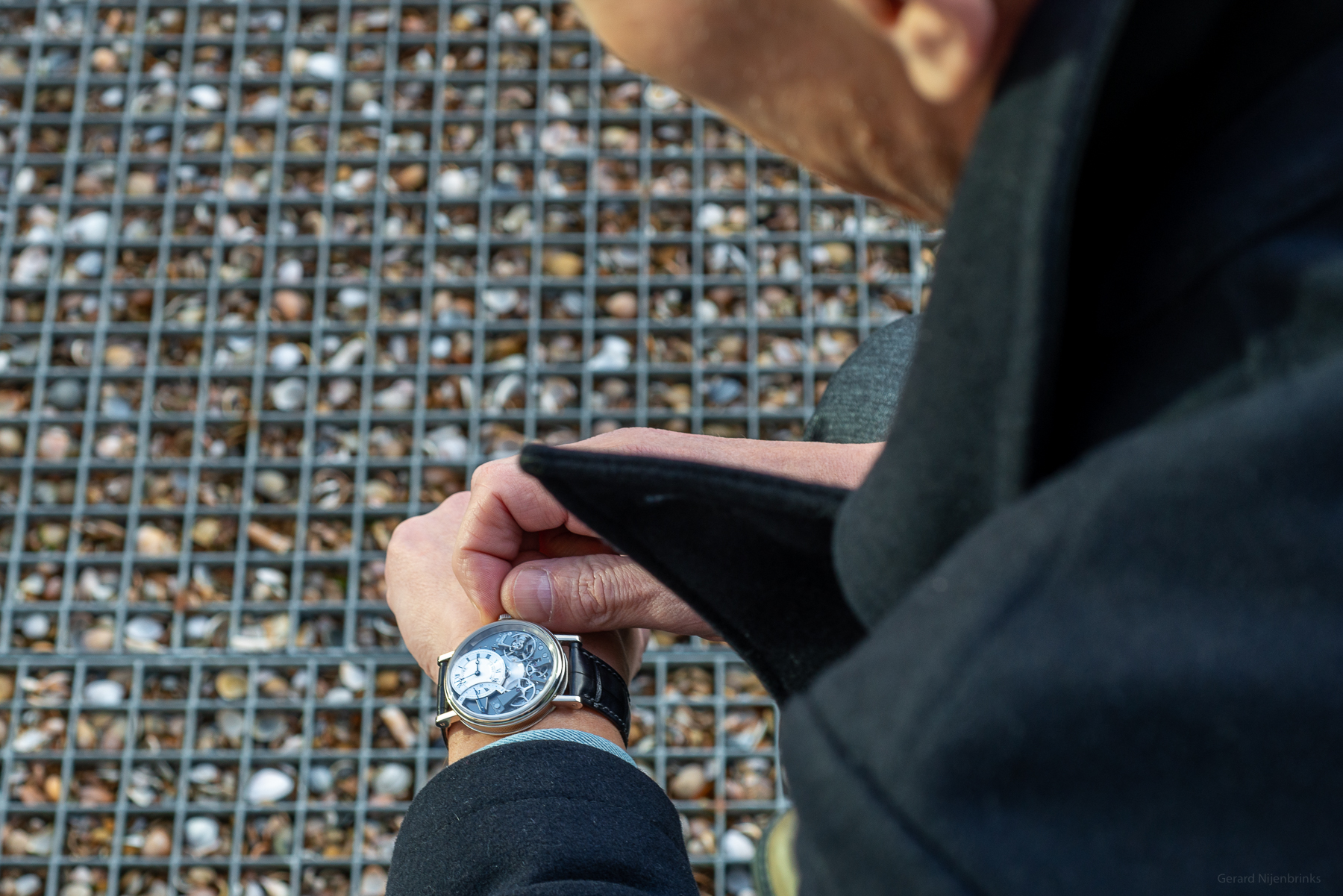 Breguet the marketer awakens during this period. “The world had completely changed,” Emmanuel Breguet explains, himself a seventh-generation descendant. “His old customers were gone, and he had to earn money by building a new clientele. But he had a plan. He came back to Paris with the idea of ​​making affordable watches for a less fortunate audience, but with the quality of a Breguet. His montre de souscription is a subscription watch. You register, pay a 25% down payment, and with the delivery guaranteed by Breguet, you pay the remaining amount. In this way, Breguet watches became more accessible, and the prepayments helped fund the development of other projects.” This is Kickstarter avant la lettre! 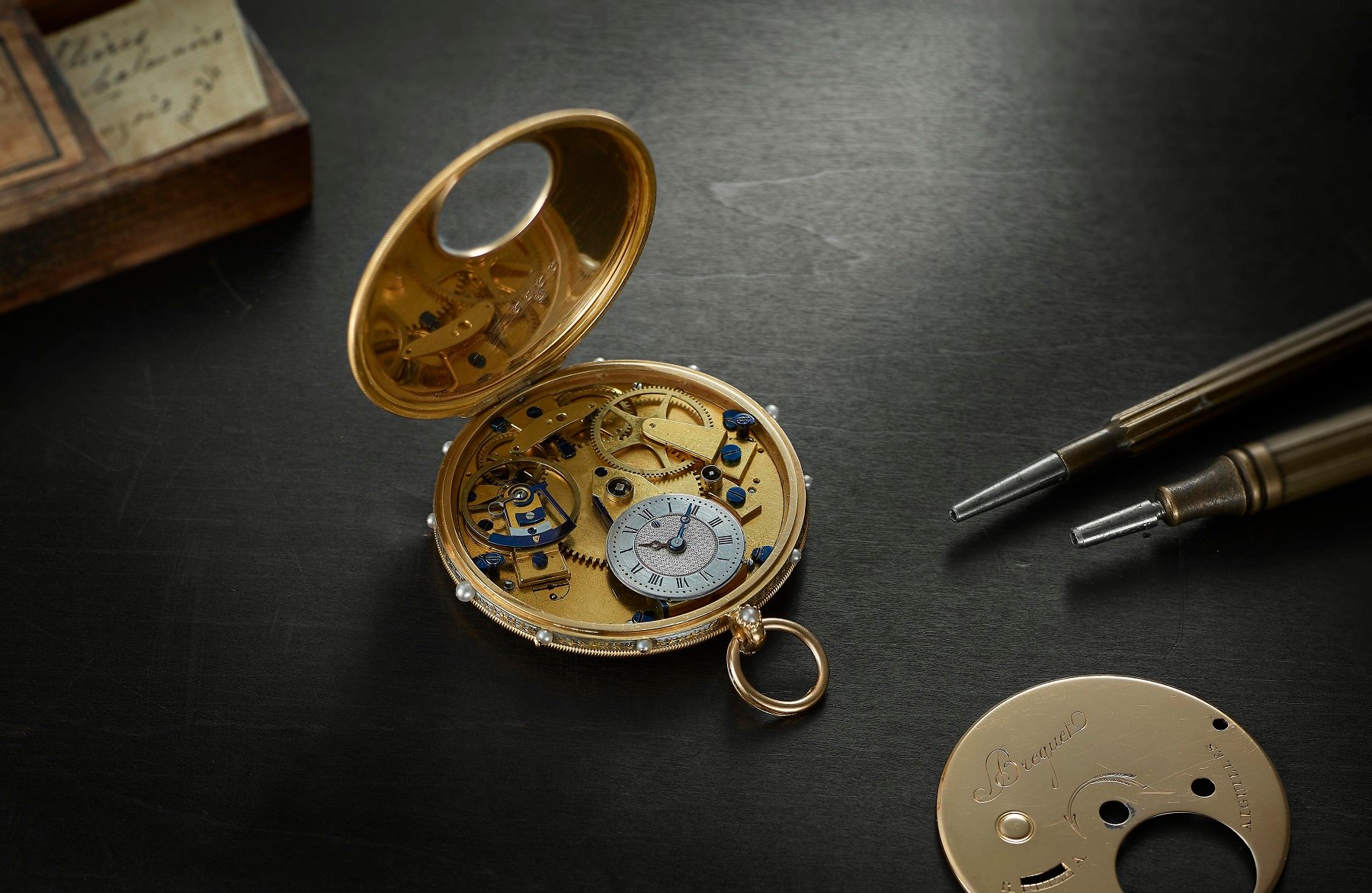 The no 2292 is a late, more refined, and evolved montre de souscription that shows the future

The idea behind the montre de souscription is fascinating, and so is its construction. Breguet built an ingenious watch that was both reliable and accurate but at a lower cost than was usual at the time. To achieve this, Breguet designed a robust timepiece, constructed as simply as possible, which could be repaired and maintained by inexperienced watchmakers. In addition, it could be produced in sufficient quantity to meet the high demand. In total, about 700 subscription watches were built and sold. To further reduce costs, Breguet used a single hand to tell time. But the spacious dial layout marked in five-minute increments still made it possible to read the time accurately. And the long central hand is the original Breguet hand that became famous and spread all over the watch industry. 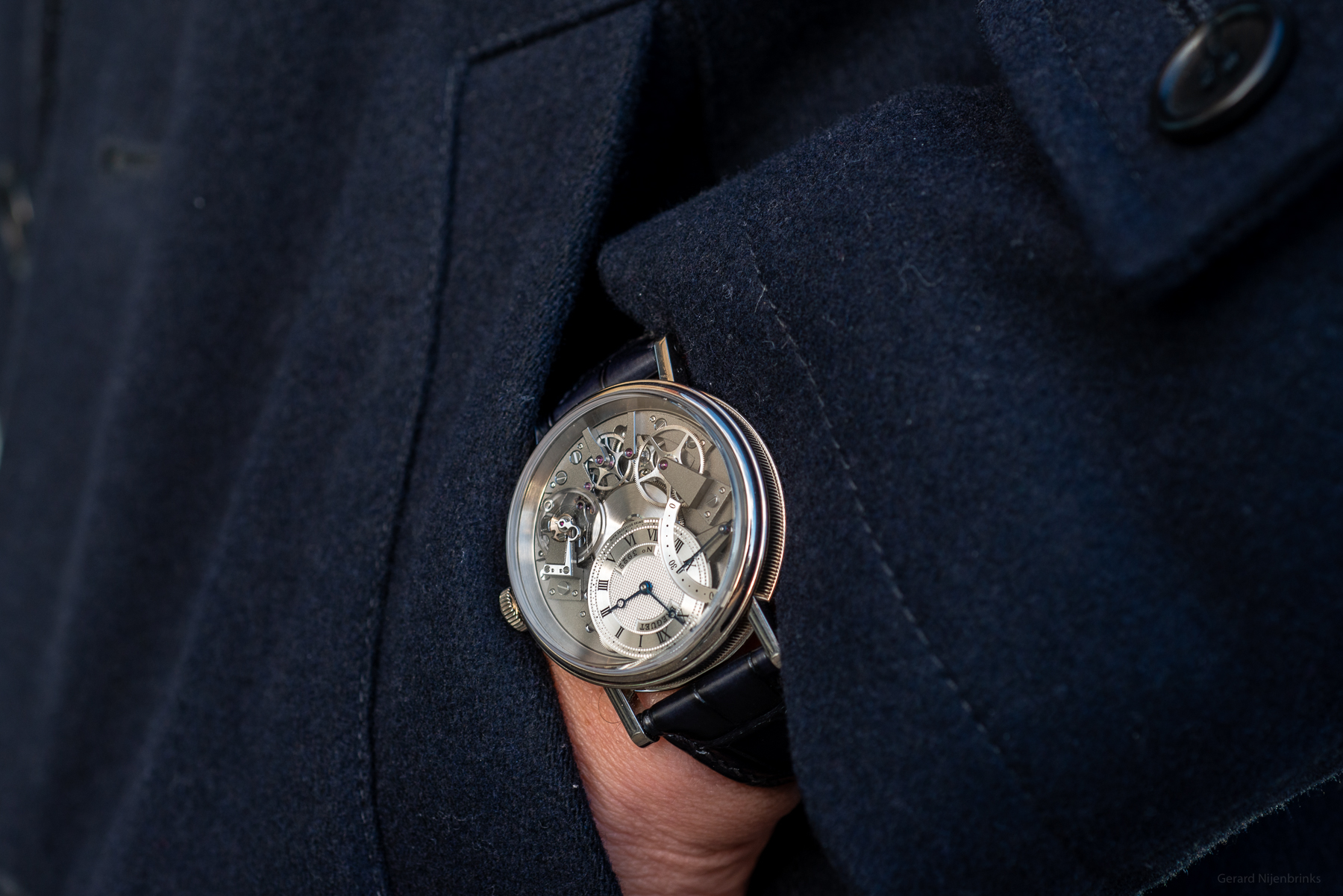 The first subscription watch Breguet sold was to M. Coquille on 11 Germinal in the year 4, the date according to the new revolutionary calendar — that’s April 1st, 1796 according to the one we know and follow. The architecture of the 61mm sturdy pocket watch was very rough in the first copies, but it gradually became more refined. The Tradition wristwatch, which debuted in 2005 and has since grown into an important collection of the modern Breguet watch house, is indebted to the montre de souscription. The timepieces have much in common when it comes to appearances. But whereas Breguet hid the movement behind a cover, the new creation shows the inner workings of the unconcealed in-house caliber. Forgive my expression, but the first Tradition started a new tradition of very peculiar Breguet wristwatches with an unrivaled historical appeal. 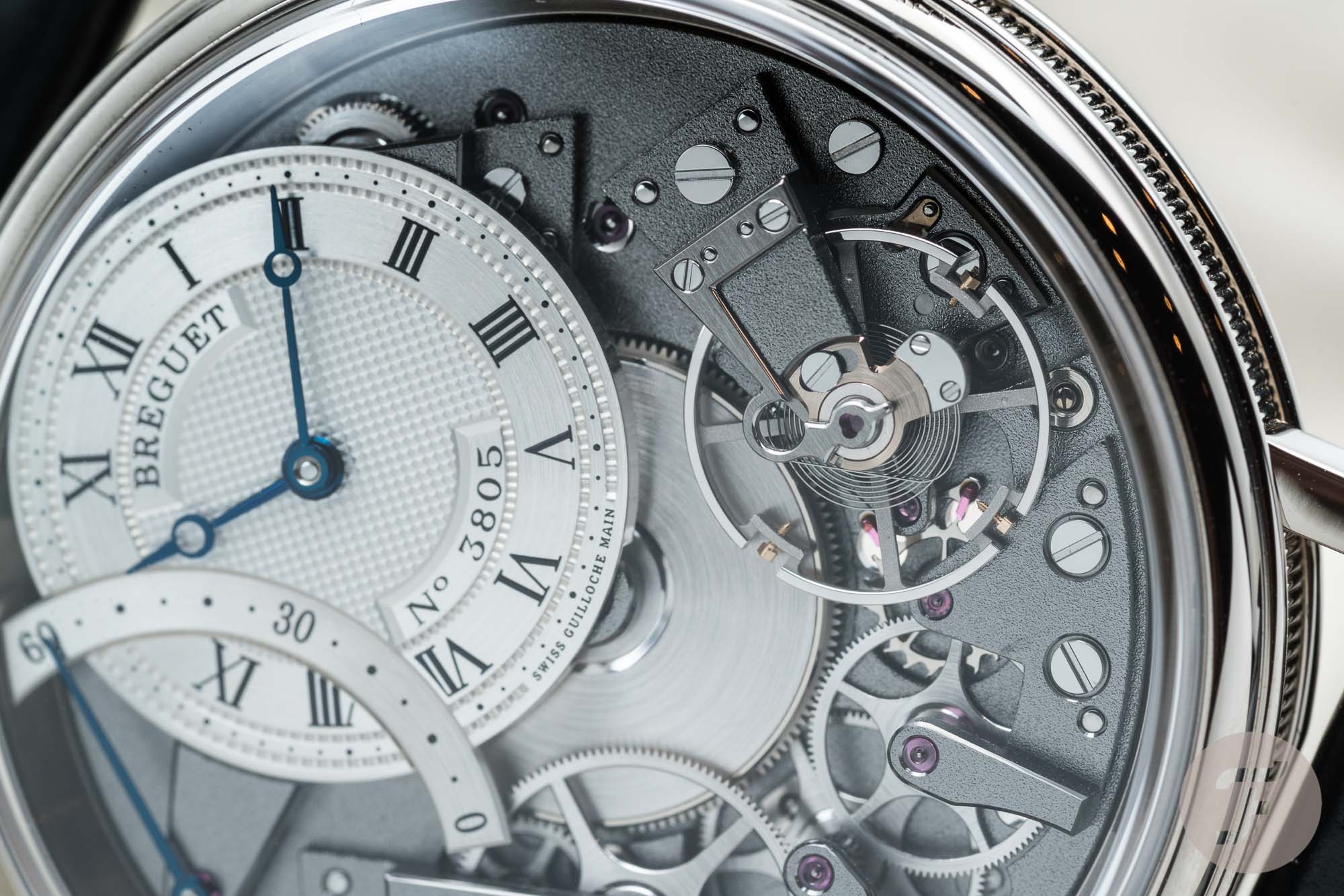 A panoramic display of the past and the present

The recent Tradition 7097 Automatique Seconde Rétrograde (€32,900) provoked my (very long) historical introduction. But when it’s a story as grandiose and adventurous as this, you can’t leave it untold. It’s also because the past becomes so very tangible with the Tradition 7097. The panoramic display of the going train is a layout that directly stems from Breguet’s later montres de souscription from the early 19th century. And when you turn the watch over, you find yourself eye-to-eye with a particularly shaped rotor derived from Breguet’s perpetuelle watches — I won’t go into depth and detail about those here, but I will save that for the next hands-on with a Breguet Tradition. 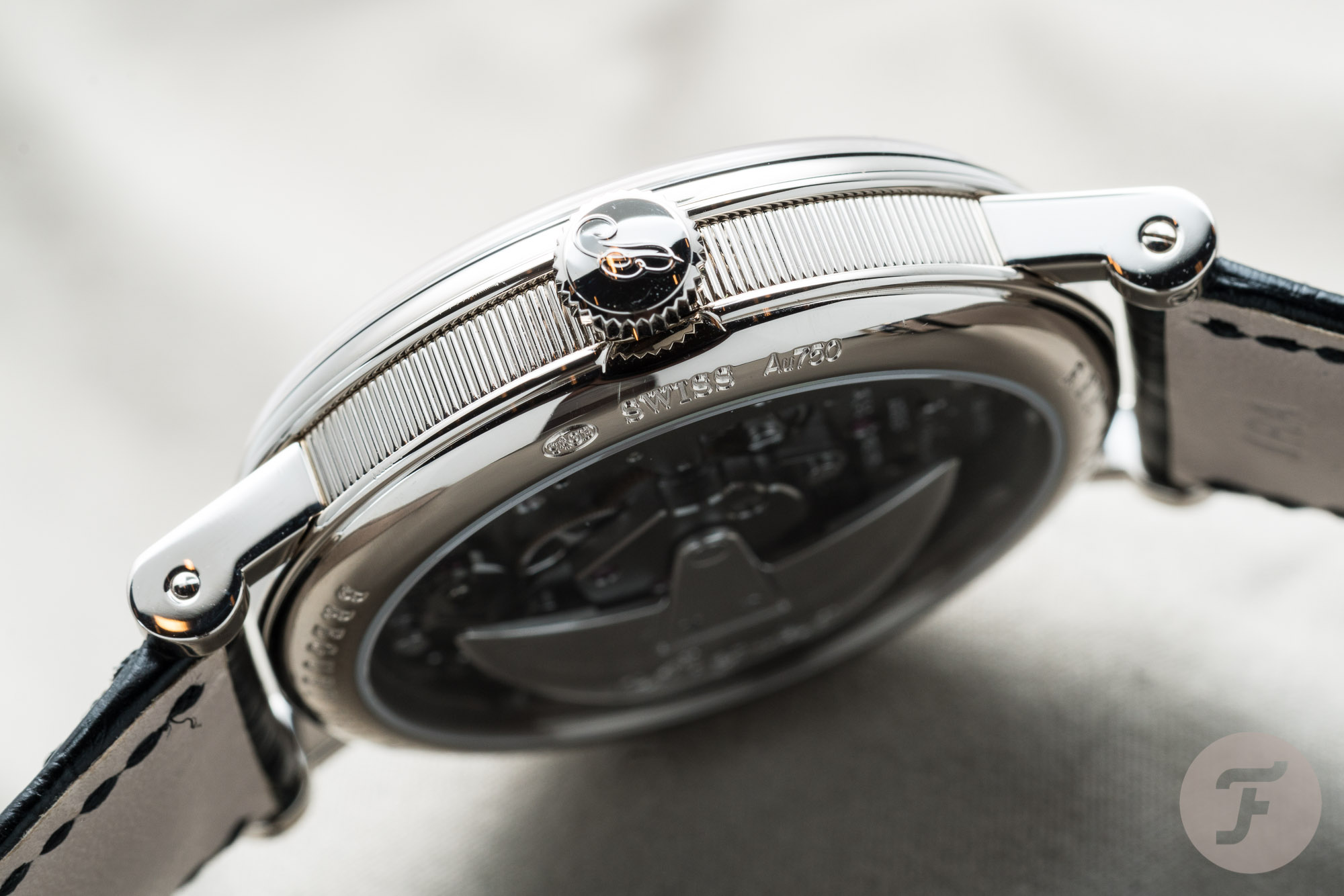 The grained finish on the bridges and main plate is a visual nod to the original subscription watches. And so is the way the stepped bridges of the train wheels and escapement are shaped — broad, angular, and with a modern, pre-industrialist look. In the center, partly hidden under the small dial, the mainspring barrel is visible. It’s in the same place as the late 18th-century original. More elements that were taken from the original and executed in a contemporary and more refined way are the open-worked gearwheels with a five-arm design. There’s even a pare-chute device to fight off shocks. Just like the tourbillon, Breguet’s pare-chute system still works today, centuries after its inception. 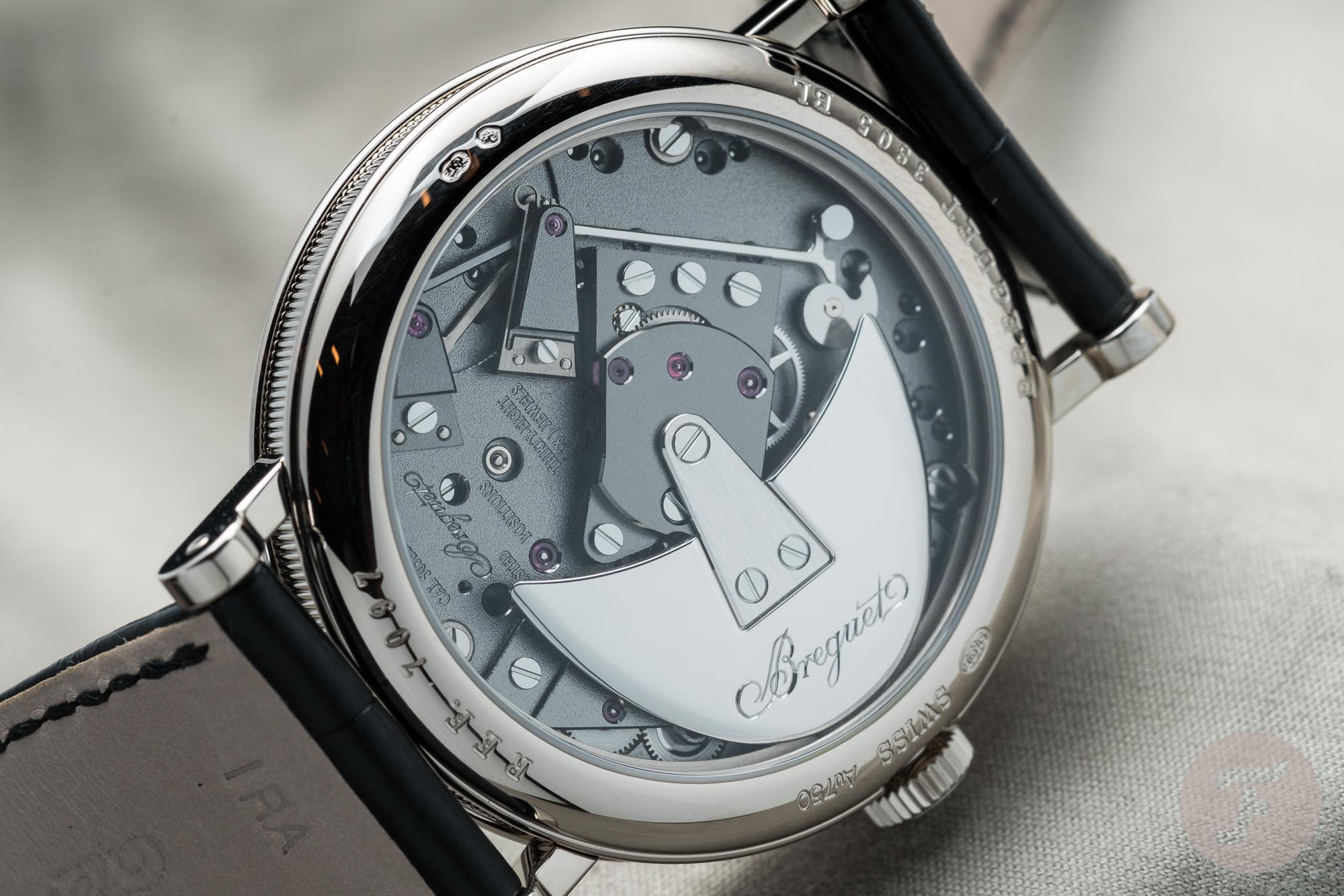 Attractive front and back

In the original subscription watches, the movement was visible from the front when you lifted the cover. The Tradition 7097 wristwatch has a movement that has components on both the front and back of the main plate. On caliber 5051RI, equipped with lever escapement with silicon pallets and a power reserve of 50 hours, the front is the more attractive side. Here you see the beating heart of the watch in action. The balance wheel swings because of a silicon balance with a Breguet overcoil. The blued retrograde seconds hand at 10 o’clock is very attractive. And so is the small, engine-turned dial, on which small but elegant blued Breguet hands show the hours and minutes. 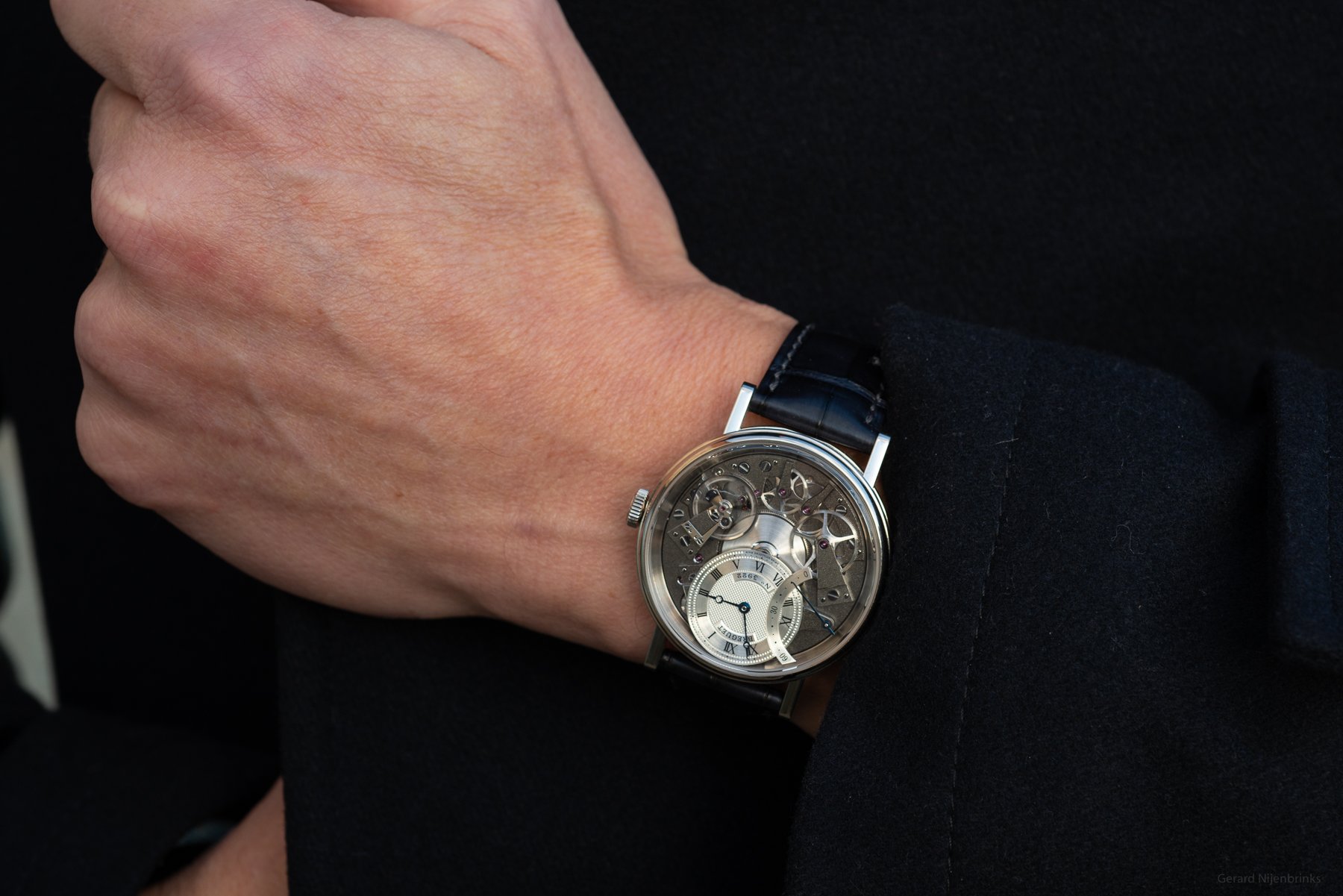 The 18K white gold Breguet Tradition 7097 measures 40mm × 11.8mm. With an elegant fluted case band and welded screw-bar lugs, is a true horological spectacle. Not in a Marvel, superhero kind of way, but more in a Three Musketeers kind of style — it’s definitely more d’Artagnan than it is Iron Man.

The Tradition 7097 Automatique Seconde Rétrograde is flamboyant and highly decorated, but because of its relatively small size, it doesn’t scream for attention. It takes time to fully take in and appreciate the three-dimensional and architectural structure of the movement that is on display. And when you do, the unique construction and its different finishes will keep you busy for a while. It’s an introvert spectacle for connoisseurs. 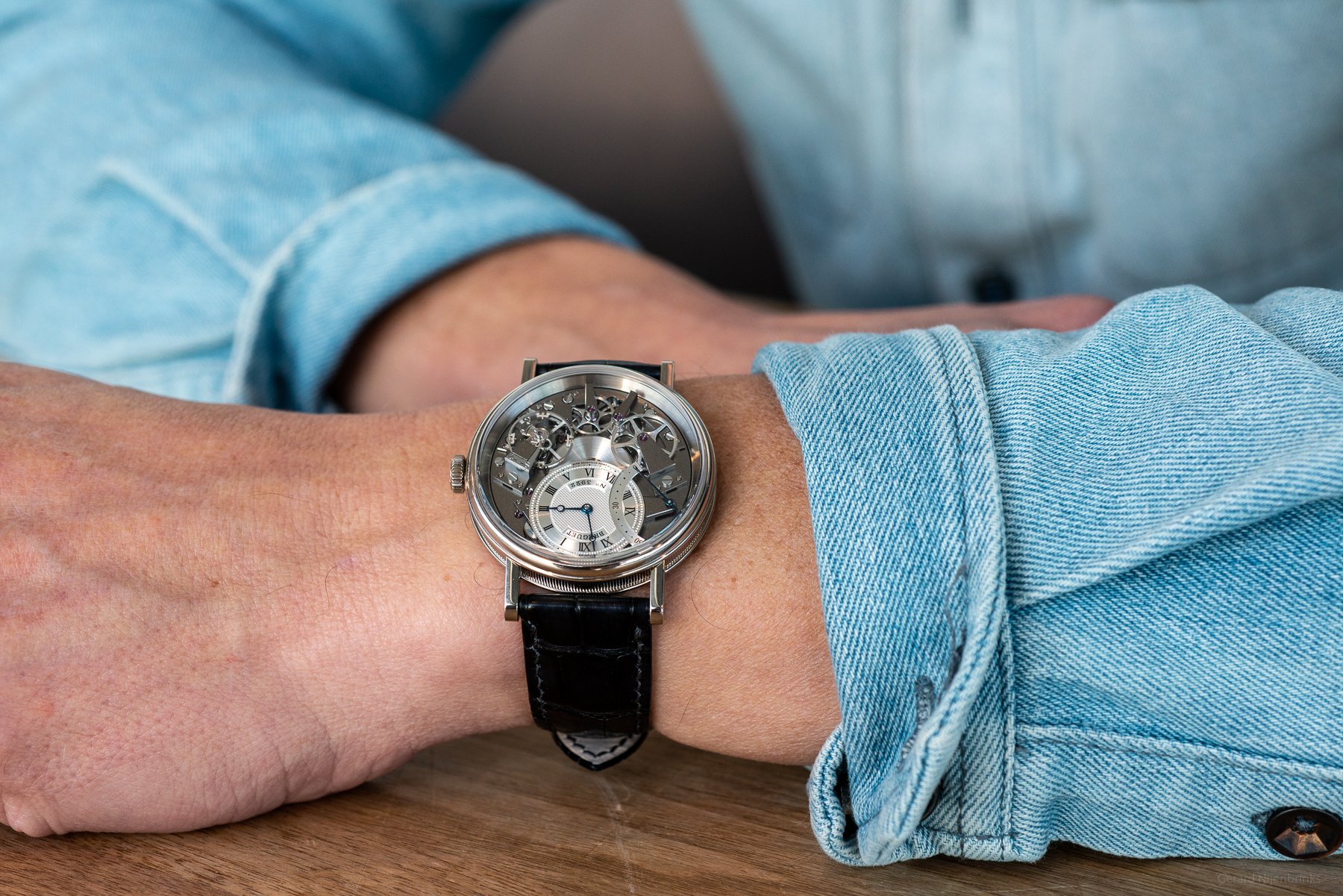 The paradox that is the Breguet Tradition 7097 Automatique Seconde Rétrograde

There’s just one last thing I have to address., and that is the paradox that is the Breguet Tradition 7097 Automatique Seconde Rétrograde. This wristwatch is a direct descendent of low-cost pocket watches. But with a price of €32,900, the Tradition 7097 is hardly a budget watch — although based on materials used, finishing, originality, and background story, Breguet didn’t overprice this particular Tradition. And unlike its predecessors, the Tradition 7097 is also not aimed at the nouveau riche. This watch speaks to seasoned horological aficionados, people with refined tastes that took ages to develop. I’m definitely developing a taste for it. 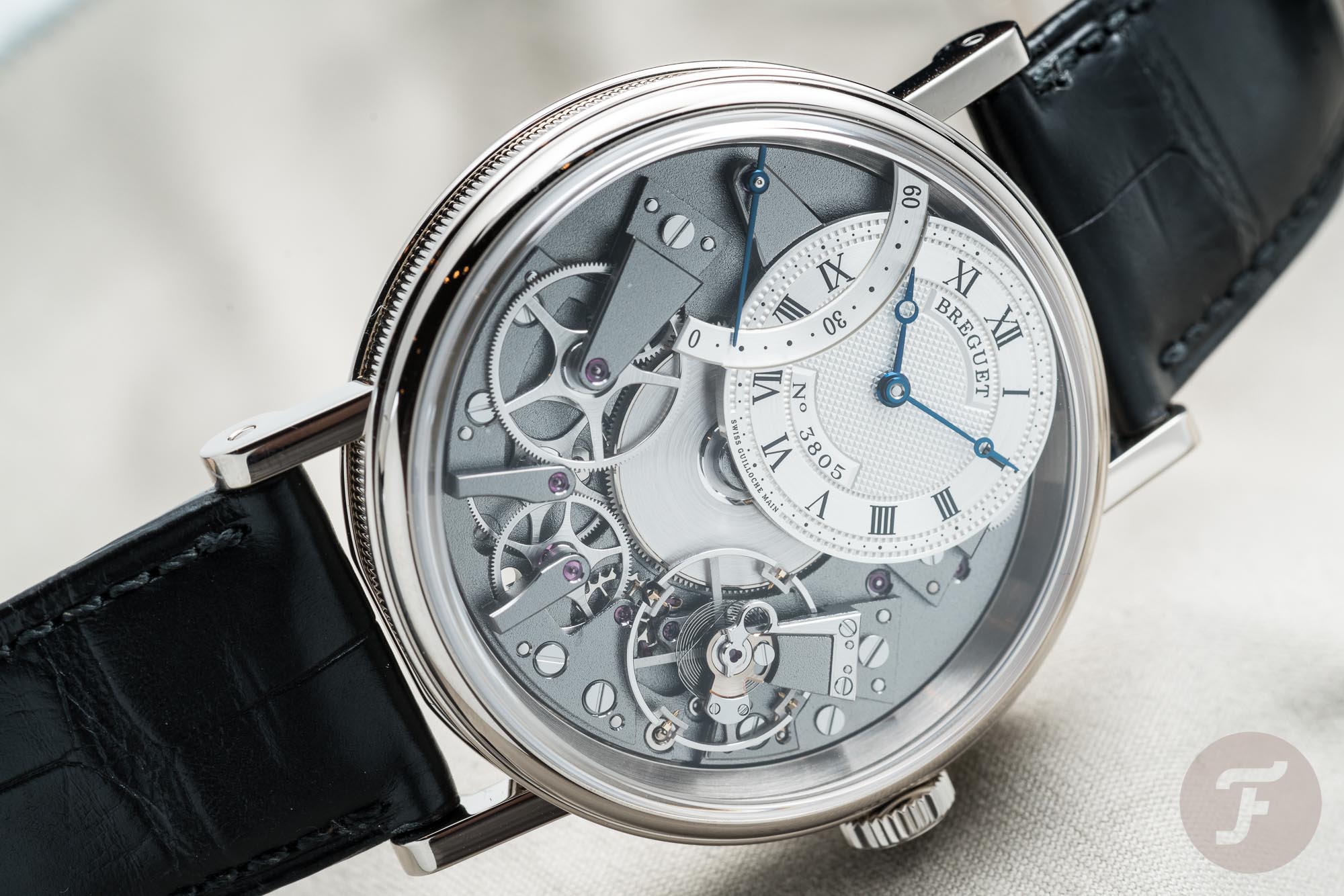