To me, it seems that Breitling has managed a difficult balancing act through the strong leadership of Georges Kern. The winged B still appeals to lovers of big watches, that’s for sure. With 43 and 46mm examples of the new Navitimer and SuperOcean together with the light Endurance Pro, big wrist presence is assured. But Breitling is also stepping up its game with an Haute Horlogerie take on the Premier line.

Yes, you did spot that unusual shape at 12 o’clock didn’t you? Flipped from the traditional placement at 6 o’clock, there is a tourbillon up top, which changes everything. I’ll admit to a guilty-pleasure desire for the too-big Endurance, but the Premier line is my favorite taste of Breitling. And this time it tastes of Haute Horology. Now, three triple-priced Premier B21 Chronograph Tourbillon 42 models in memory of the brand’s founding family join the already extensive range. This release marks the second time we’ve seen a tourbillon in the Premier collection, though you’d be forgiven for having missed the 25-piece Bentley Limited Edition last year. 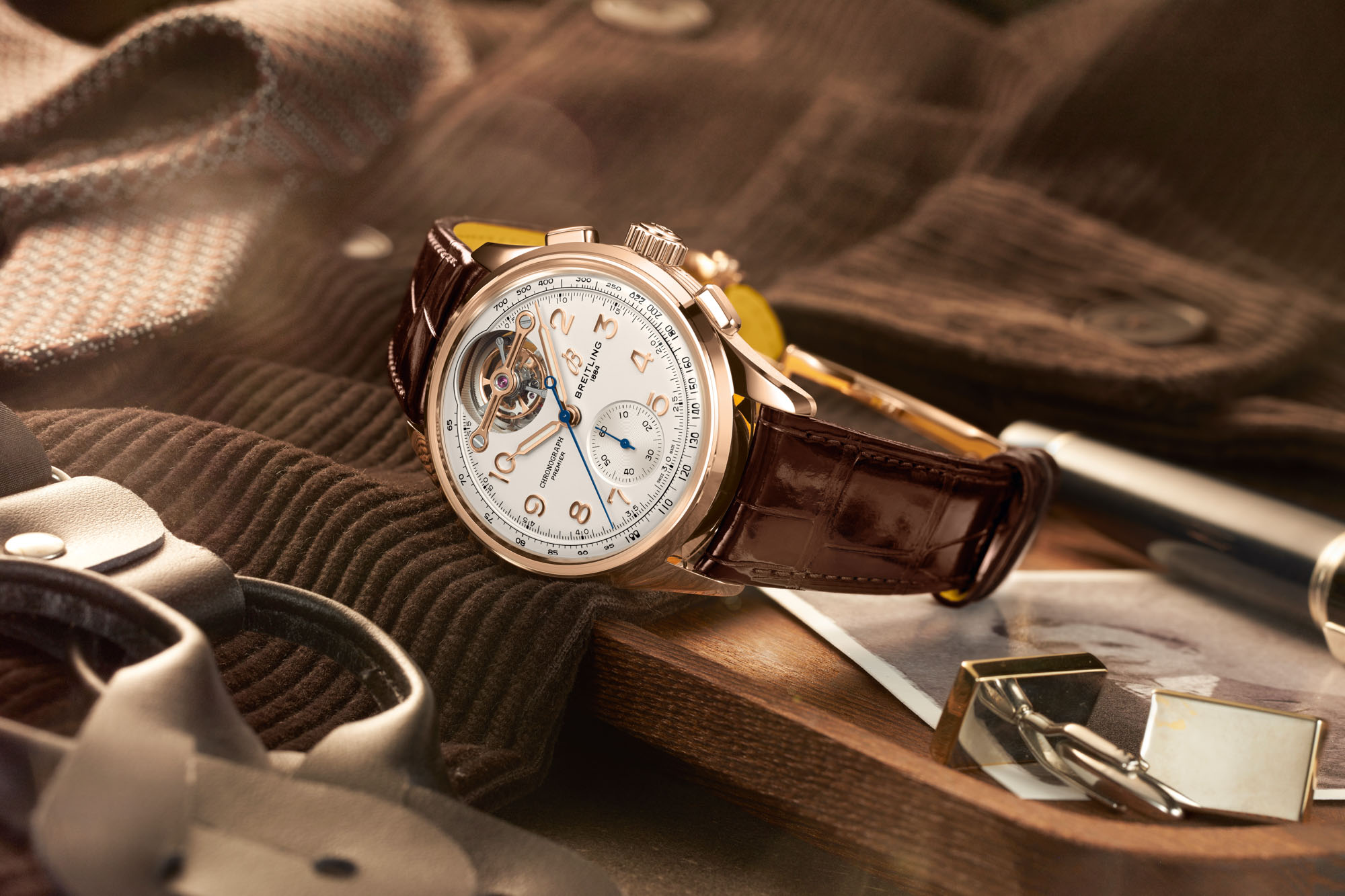 Where does a tourbillon fit into the lineup?

Adding a tourbillon to a Breitling might seem at odds with the brand’s tough design language, colored by its rich history of flight instruments for the wrist. Add big sports watches with much of the Chronomat line and diving inspiration with the SuperOcean, and it’s a butch mix. Dress watches are not Breitling’s forte, but maybe that’s just fine. The category in itself is fading out except for the runaway success of Cartier, or maybe a watch doesn’t need to be dressy to house a tourbillon anyway. I would say it’s not necessary. But still, the Premier, even with its 42mm case, is an example of traditional design and the closest Breitling will get to a dress watch. And this focus does get my respect. By adding this top-tier complication to the Premier, it almost triples the price of a Premier Datora 42 in gold. Is it worth the leap? 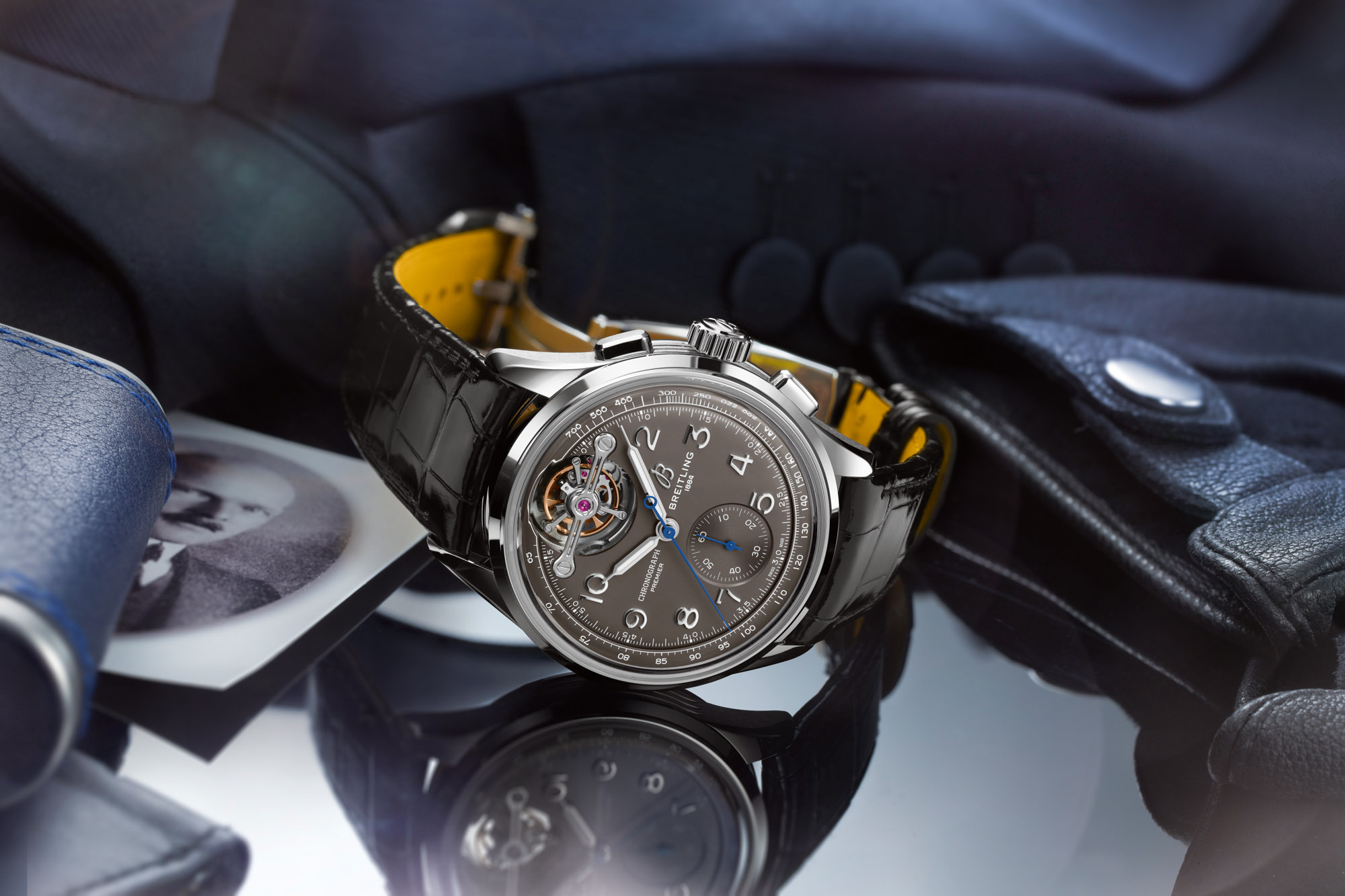 A top-of-the-line trio for the Breitling aficionados

Without concluding on the price-versus-value aspect, I would say that for the Breitling grail potential, it might be worth it. This is a piece of horology for the complete Breitling collector out there, whose passion will stretch close to €70K to reach the very top tier. And for a top Swiss brand, that cost is comparatively good for the über-complexity of a tourbillon chronograph. Within the same case design as the B25 Datora and the B15 Duograph, there is nothing over the top about the design, which is just right. There is the Breitling touch of a yellow lining to the alligator straps, which is quirky, but the rest is classicism incarnate. And at this price point, that’s what the serious Breitling collector wants. 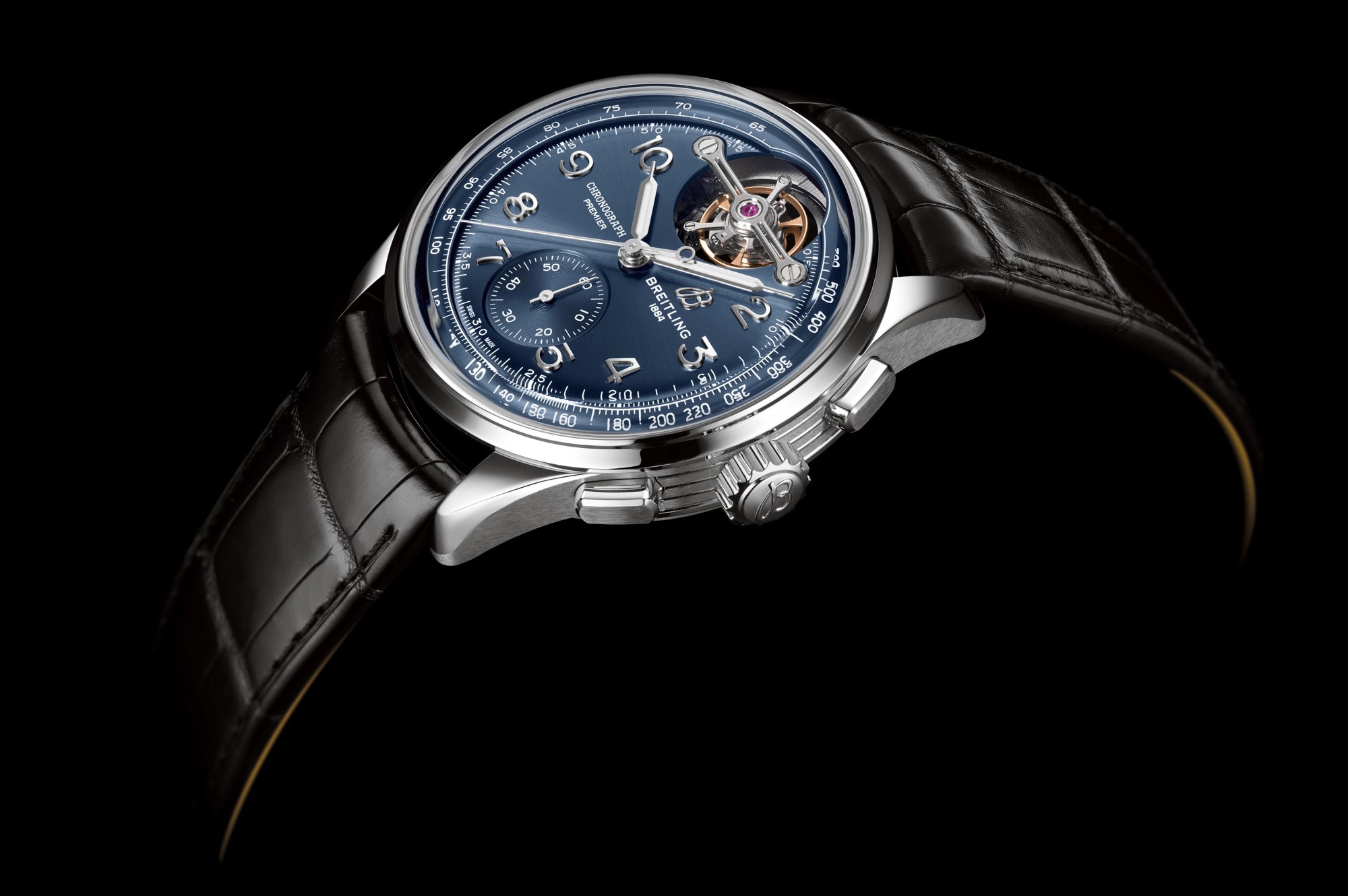 A soft 42mm case holds a navy-blue dial in my favorite Willy Breitling model. Its platinum luster is strong, but is the case itself a bit big for a tourbillon? Perhaps, but the striated side sections add character while the relatively short 50mm lug span means comfort. And remember, for Breitling, this is not large, and the details do warrant its scale. White gold numerals look superb on the stepped dial, and while the never-to-be-used tachymeter scale is crisp, the action is at 12. The tourbillon opening is cut into the scale, its line accentuating the circular cut-out. I could argue that this premier Premier (sorry) would look better as a three-hander, as no one will time any sporting activity with an almost-€70K platinum watch. But the B21 movement with these two complications marks out craftsmanship, not functionality. 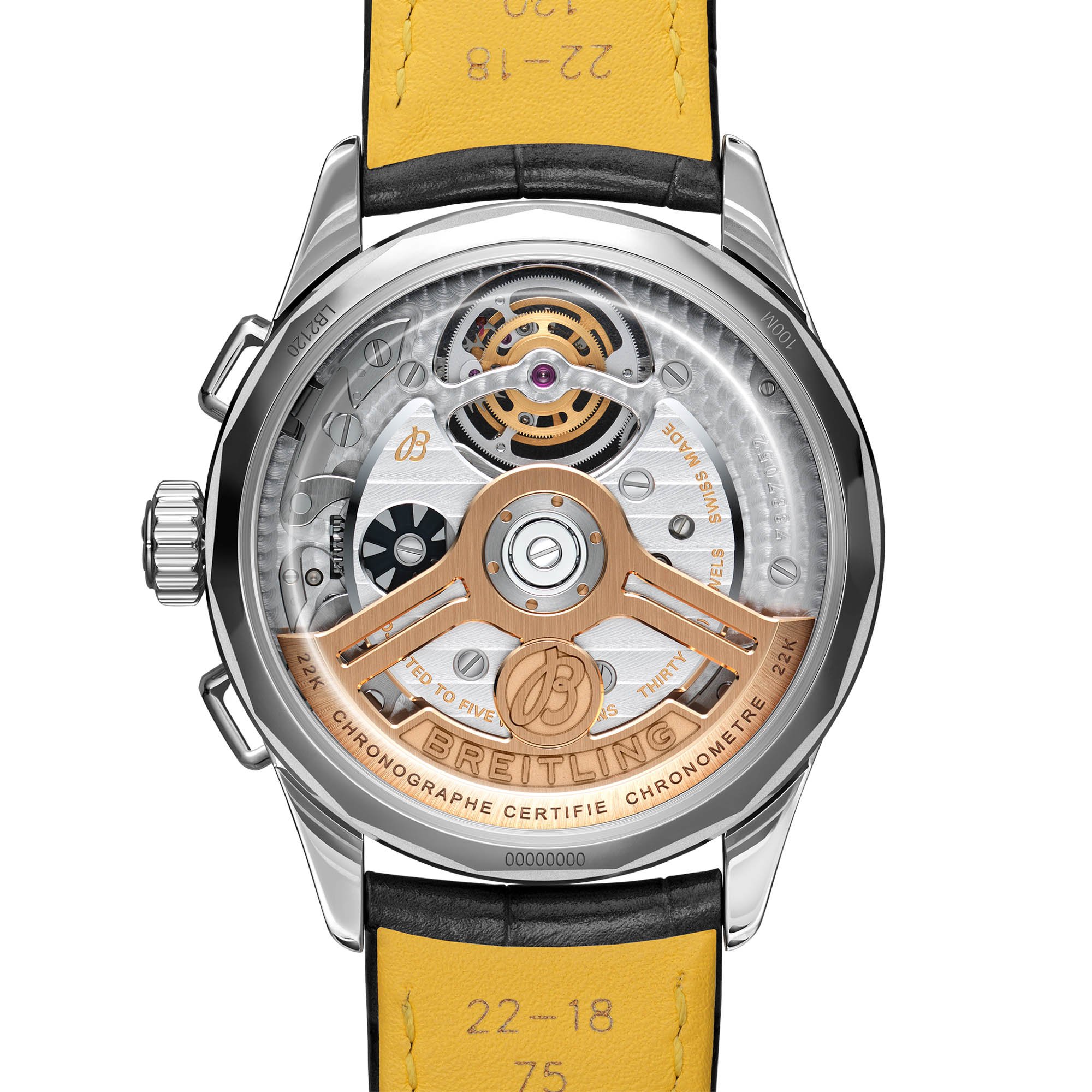 Interestingly, it was developed with La Joux-Perret rather than the Kenissi manufacture. As expected, it is replete with decorations, including perlage on the mainplate and tourbillon bridge, Côtes de Genève on the upper plate, and polished bevels as well. They carry through to the skeletonized 22K red gold rotor, which also shows distinct vertical brushing and the Breitling logo in relief. The caliber’s somewhat discreet architecture doesn’t reveal everything but highlights the tourbillon mechanism and the column wheel. This 30-jewel caliber ticks away at 28,800vph (4Hz) and delivers a power reserve of 55 hours. On the dial side, it displays a central chronograph seconds hand and a 60-minute counter at 6 o’clock. 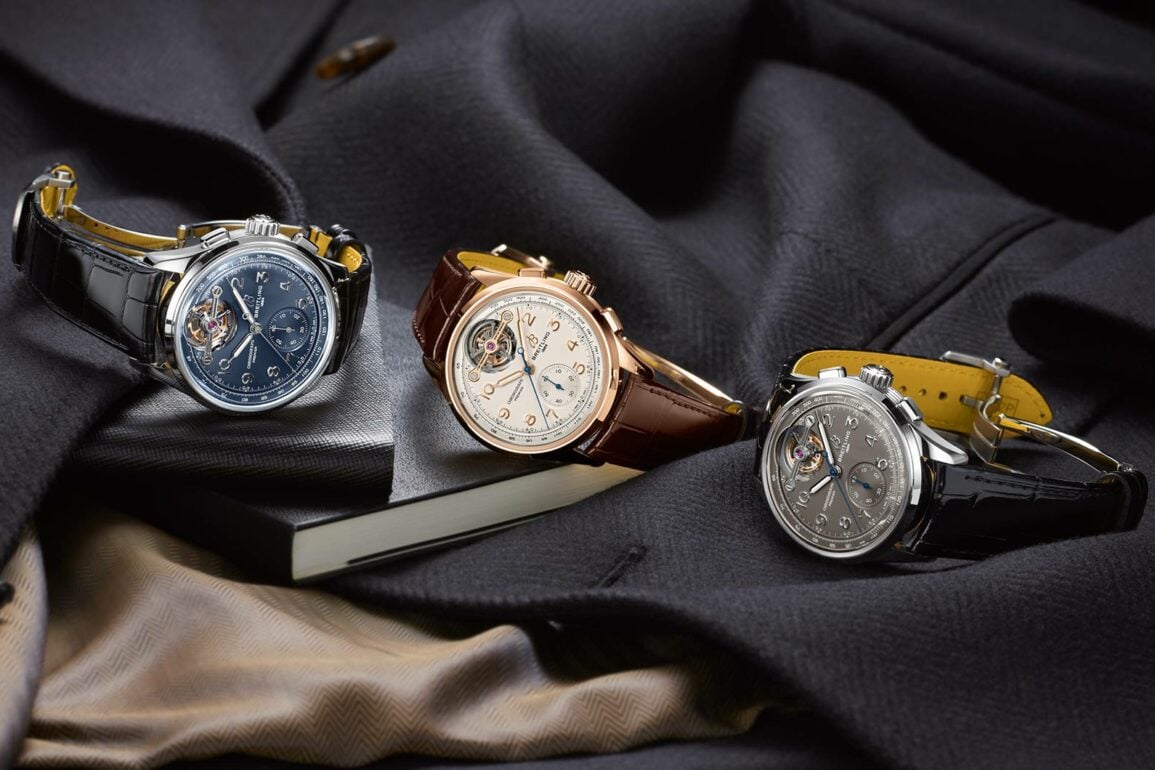 Are these Premiers worth the Premium?

The Willy Breitling with its scintillating blue dial and platinum suit is the star of the show. The new caliber is viewable through a domed sapphire back, and Léon Breitling gets a warm 18K red gold case. This looks suave with a cream dial and brown alligator, while the charming modernity of Gaston is a monochrome grail. The Gaston Breitling version has a white gold case and a soft gray dial with a dark gray strap. You won’t notice it when wearing it, but holding it, the lemon-pop of the yellow strap liner is a cheeky choice. And notice the fresh touch of the blued chronograph hands on the Léon and Gaston variants.

So what about the price tag? Celebrating brand founder Léon Breitling or his son Gaston will set you back a solid €56,000 / US$57,000. My favorite platinum-cased version, dedicated to third-generation leader Willy Breiting, is a sobering €66,000 / US$67,000. Yes, it is a fitting celebratory piece, and the Premier collection born in 1943 is a superb fit for this tourbillon and self-winding B21. For me, these three are all beautiful examples of a direction I would love Breitling to follow, and yes, there will be collectors out there who have now found their triple grails.

Fratelli, do you think that a tourbillon means Breitling is stepping up its Premier game? You might even feel these three are too traditional to sit beside the big sports watches that we are used to seeing from the brand. I love ’em, but let me know what you think in the comments.