New Release: The Bremont S300 RFU Limited Edition — In Celebration Of The Brand’s Partnership With England Rugby And Twickenham Stadium

Time to brush the dried mud off your cleats and kit up — Bremont has just announced the release of a new limited edition watch in partnership with the RFU. The Henly on Thames brand proudly presented its latest release today: the Bremont S300 RFU. A watch that adopts the kit colors of England Rugby, as well as the signature, rose logo, subtly incorporated onto the crisp white dial. Bremont not only acts as the official timing partner to the RFU, but it also brings you all match day content taking place in Twickenham stadium. If you’re lucky enough to make it to a match, you’ll see a number of branded match clocks in the stadium as well. So, if you are a fan of Rugby, Bremont, and all things British, keep your eyes on the brand’s site, as only 150 pieces of this special LE release will be produced.

If you are a fan of Bremont, you’ll know that this is not the brand’s first watch released in partnership with England Rugby. Just last year, we saw the RFU 150 model launched to celebrate the 150th anniversary of England Rugby in 2021. This 43mm dive GMT followed a predominantly dark blue color scheme, with accents in red and white. However, with the latest limited edition release, Bremont has opted for its 40mm Supermarine S300 as a base. This time sporting the same white kit worn by the England rugby team’s players. Now, if you’ve already seen the standard white-dialed S300, you’ll notice plenty of changes, though the color combination was already there. It’s all about those subtle design tweaks that make the S300 RFU the perfect watch for supporters and fans of England Rugby. 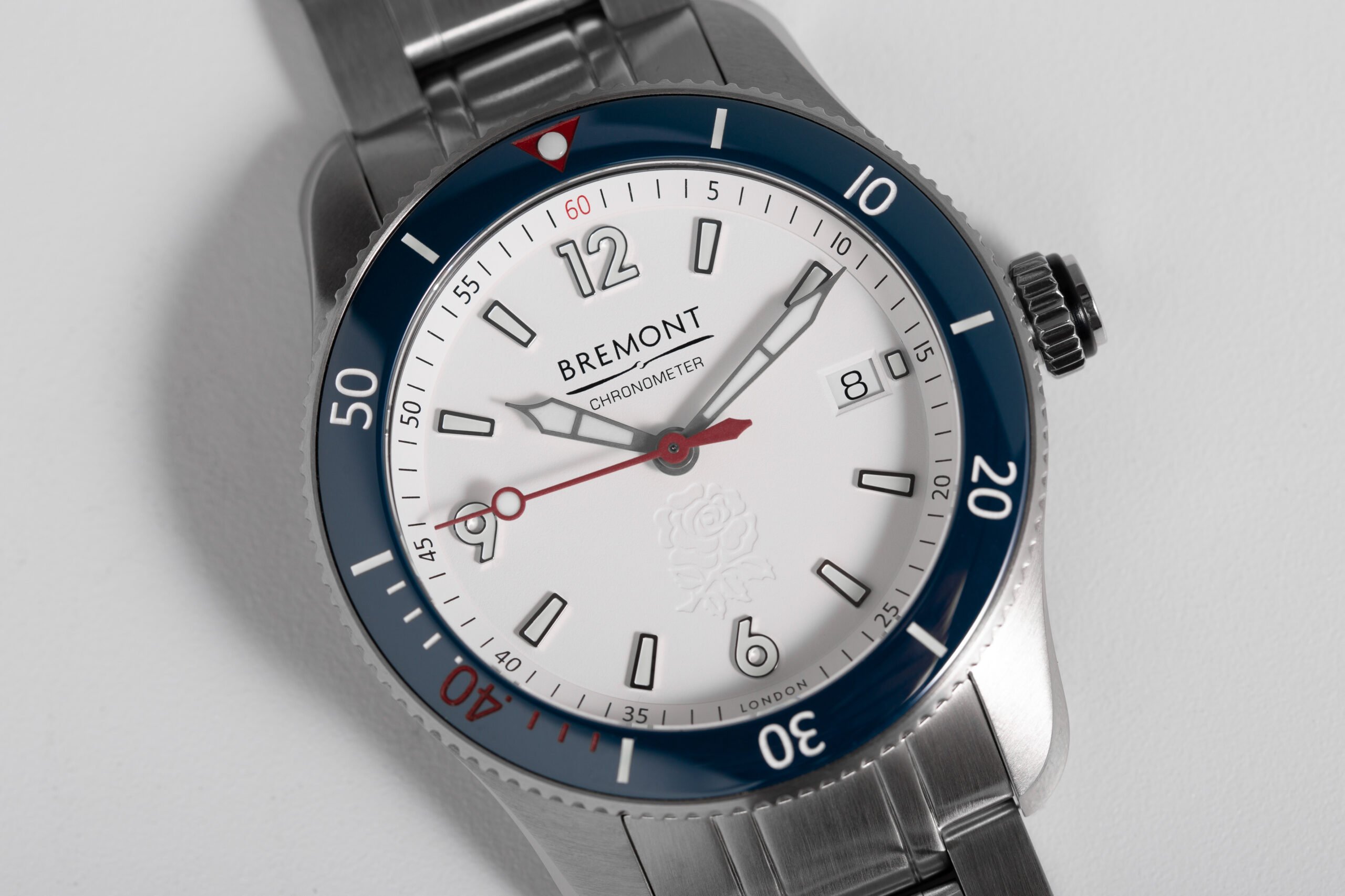 So, what exactly are these changes? Let’s start topside, on the dial. The first thing you’ll notice is that the blue, silver-edged markings on the dial are replaced with applied numerals and indices. These elements feature a silver metallic edge filled with white lume. Another big change can be found on the dial itself. Instead of the central portion featuring a textured guilloche-like texture, the dial is flat white throughout, with the exception of the debossed rose logo of the RFU which sits subtly above the 6 o’clock marker. This also replaces the water-resistance text and model name on the dial. Instead, the word “chronometer” sits underneath the Bremont logo at 12 o’clock. This creates a cleaner feel to the dial, but the applied markers add plenty of depth in how they play with the light.

Let’s talk hands. The limited-edition model’s seconds hand is all-red, a nod to St. George’s cross. The blue bezel, which normally holds only white numerals, hash markings every minute in the first 20 minutes, and a red triangle at 12 o’clock with a white lume pip, is a little bit different in this special model. Though it’s still a capable diver, the sport of choice here is Rugby. Therefore the timing indications are designed to suit followers and players of the sport. With the 40-minute marker and the preceding four hash marks in red. This shows the halfway point of the rugby match in question. The last four minutes in red provide a visual countdown, and the following four hashmark (in white) help track any overtime necessary. All you have to do is align the arrow to the minute’s hand at the start of the match — game on! 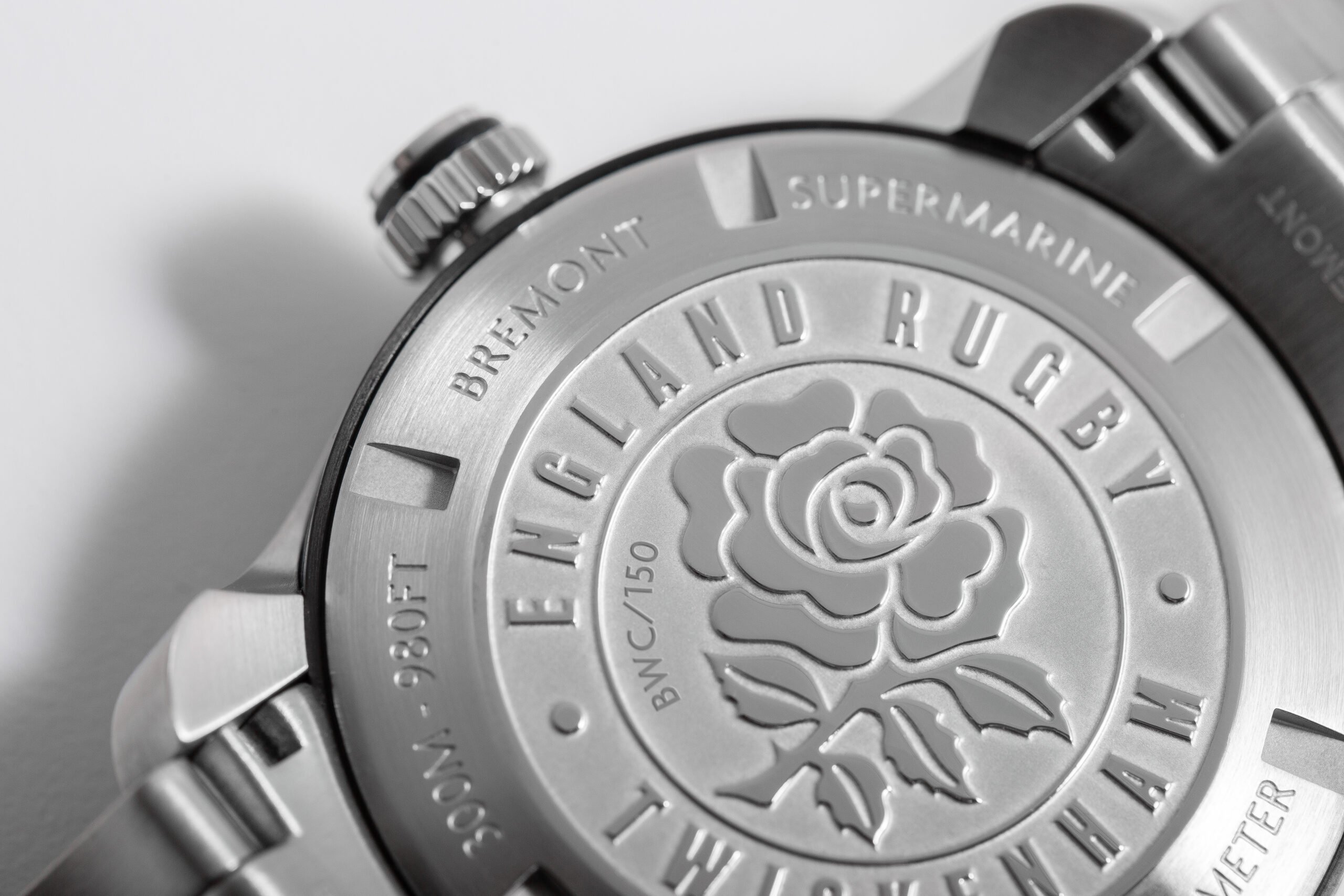 Instead of the usual engraved seaplane logo, on the back of the S300 RFU, you’ll find the rose logo, as well as the words “England Rugby” and “Twickenham”. Additionally, the number of the watch out of 150, and the usual markings indicating the model, brand, movement winding system, its chronometer rating, and its water resistance. When you flip the watch over you’ll undoubtedly notice Bremont’s signature “trip-tick” case design. One of the most unique and special case designs I’ve seen for a long time. The sharp chamfered lugs taper away, leaving the black-coated, striped central barrel of the case exposed. It’s not easy to describe, but the pictures above should do it justice. Though I already mentioned it previously it’s worth mentioning the watch’s perfect 40mm size.

So there you have it. A new special release from Bremont in partnership with England Rugby, and in anticipation of the 2022 Six Nations. Are you a fan of the S300 RFU? If you’re a rugby fan and a supporter of England, you more than likely will appreciate the meaning of this watch. And if you’re not, well, the standard S300, in both black and white is still an excellent watch! The price of the LE comes in slightly over that of the standard model (which is no surprise), but at €4,135 (no doubt a rounder number in Pounds Sterling) it’s still well within the brand’s usual price point. And certainly reasonable for such a limited release. For more information, check out the Bremont website.