Because the Schwerty is ready for a comeback!
Nacho Conde Garzón
comments 90
Share

Ever since I first got into watches, there have been a few pieces that have always struck me as special. The Rolex Explorer II 16570 is one example. Another is the Omega Seamaster 300 M ref. 2254.50. This is a watch that takes us back to the days of aluminum bezel inserts and Pierce Brosnan playing the world’s favorite British secret agent. Though the original Omega SMP shares its 1993 birthyear with the author, the specific model I’ll be making a case for today, the fifth-generation SMP, was released in 2000. With its sharp sword hands, it’s this brilliant iteration of Omega’s flagship dive watch that I’d love to see make a comeback today. As the latest reference in the Seamaster line (the 210.30.42.20.01.001) brings back the signature wave dial and maintains the classic good looks of the SMP, I think it’s time for the “Schwerty” to return.

Looking back, the Omega Seamaster 2254.50 was not the only model to feature the famous sword hands. In fact, they were featured in quite a few models, including the SMP chronograph (2594.52.00), GMT (2234.50.00), and in a number of America’s Cup special-edition watches. These include the wonderful regatta timer (2569.50.00), chronograph (2594.50.00 and 2293.50.00), and standard SMP with a white gold bezel insert (2533.50.00). Even a low-key, cool, full white gold version that Lex covered back in April of last year! However, it seems that Omega decided to drop its weapons, and leave all traces of swords hands in the past. Checking the current Omega catalog, not a single watch features this same set of hands, and I think it’s an absolute tragedy. 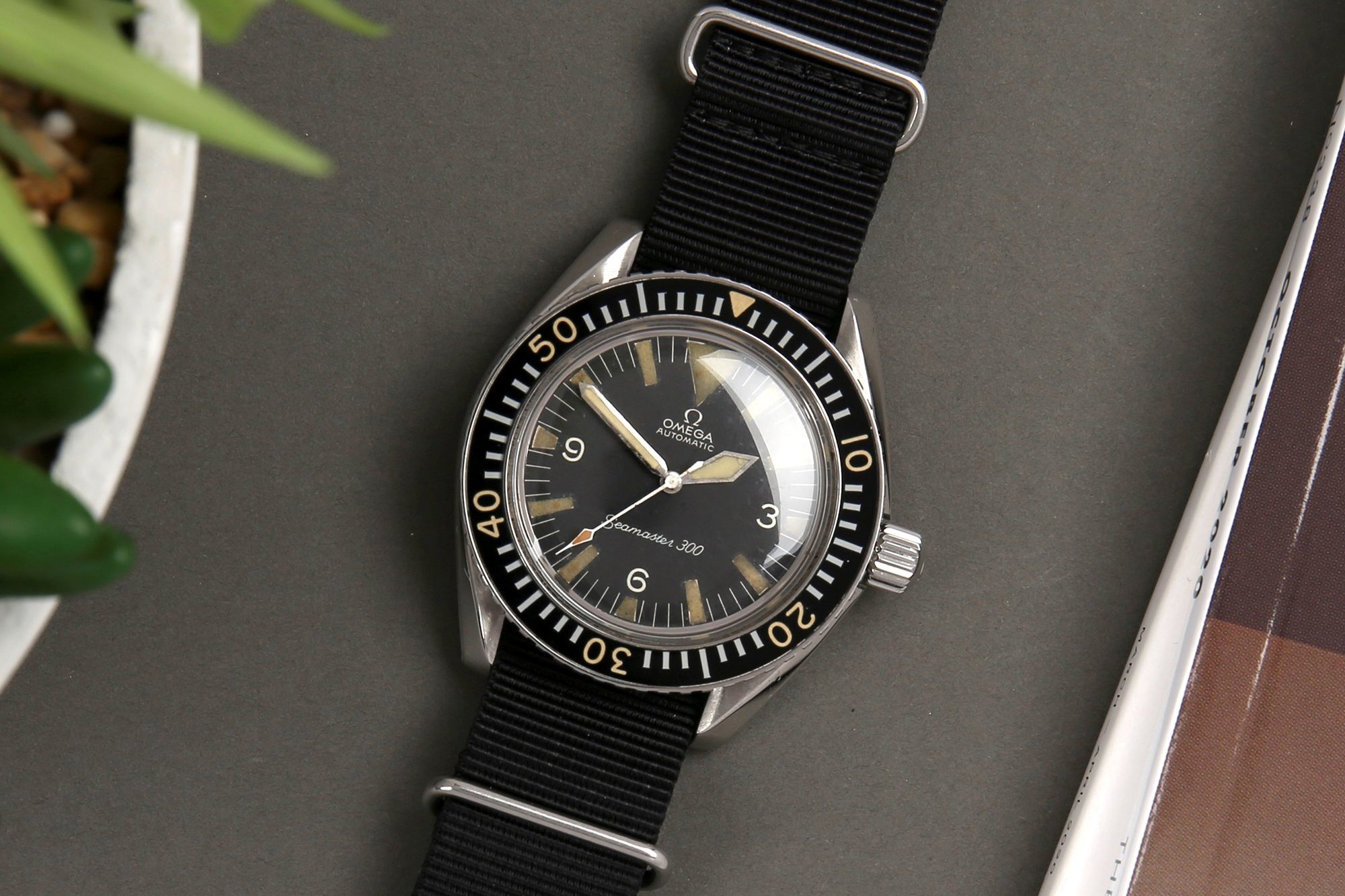 But Omega’s long story with this particular handset doesn’t come from the year 2000 when the 2254.50 was released. It actually goes way back. Even as far back as the 1960s. In 1962, Omega introduced the Seamaster 300 165.024, a classic Seamaster reference and one with a rich history involving the British Royal Navy, which commissioned a number of these watches. This is one of the first instances where a broader version of the sword hands make their way into the Seamaster model. In the ‘70s, Omega started to dive to new depths, introducing the watches that would come to be known as the PloProf. This includes the Seamaster 600 (166.077), the Seamaster 1000 (166.093), and even the “Baby PloProf” Seamaster 200 (166.0177).

All of those watches also feature Omega’s sword-shaped minute hand. Not only that, it’s proudly painted a bright diver’s orange. These were professional dive watches, and proper visibility of the minute hand can be key to the wearer’s survival. So, not only are these the sharpest hands in the world of dive watches, but they also have a long history in Omega’s back catalog and serve an important purpose. To me, likely due to the famous military Rolex Submariner “Milsub” models, sword-shaped hands also have a military association. They (quite literally) give a watch the special edge. This was certainly the case when it came to the Seamaster 2254.50. Do I like the classic 2541.80 and 2220.80 models? Sure. But do I love the 2254.50? You can bet on it! It’s not a watch that I would consider my grail, but it’s one I know I’ll have to own one day. 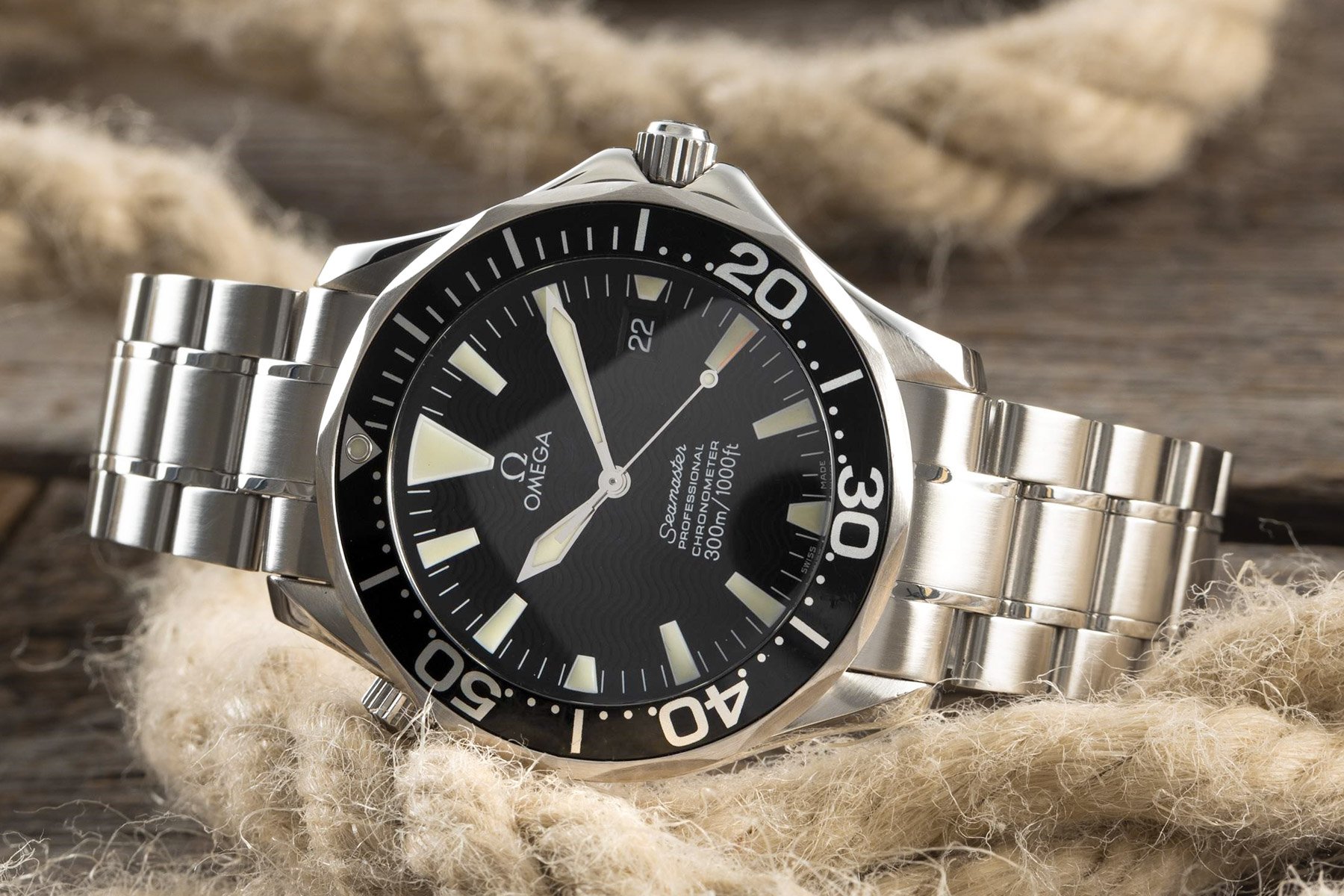 When I look at the Seamaster 2254.50, I see something a little bit more edgy than the classic “Bond” Seamaster. It looks perfectly purpose-built, stark, and stripped-back of all unnecessary ballast. I can picture it in my head. Like a scene out of your favorite street racing action movie franchise. Our main protagonist, probably in a tank top with a silver cross around his neck, grunts, “We’re gonna make this puppy faster than ever,” as he rips the back seat out of a shiny, racing-striped, American muscle car. This watch feels like the horological version of that. Rather than the more decorative, smaller lume markers on the blue wave-dialed, skeleton-handed counterpart, the 2254.50 features big blocky markers. These are more similar to the ones that found their way to the Seamaster Planet Ocean. 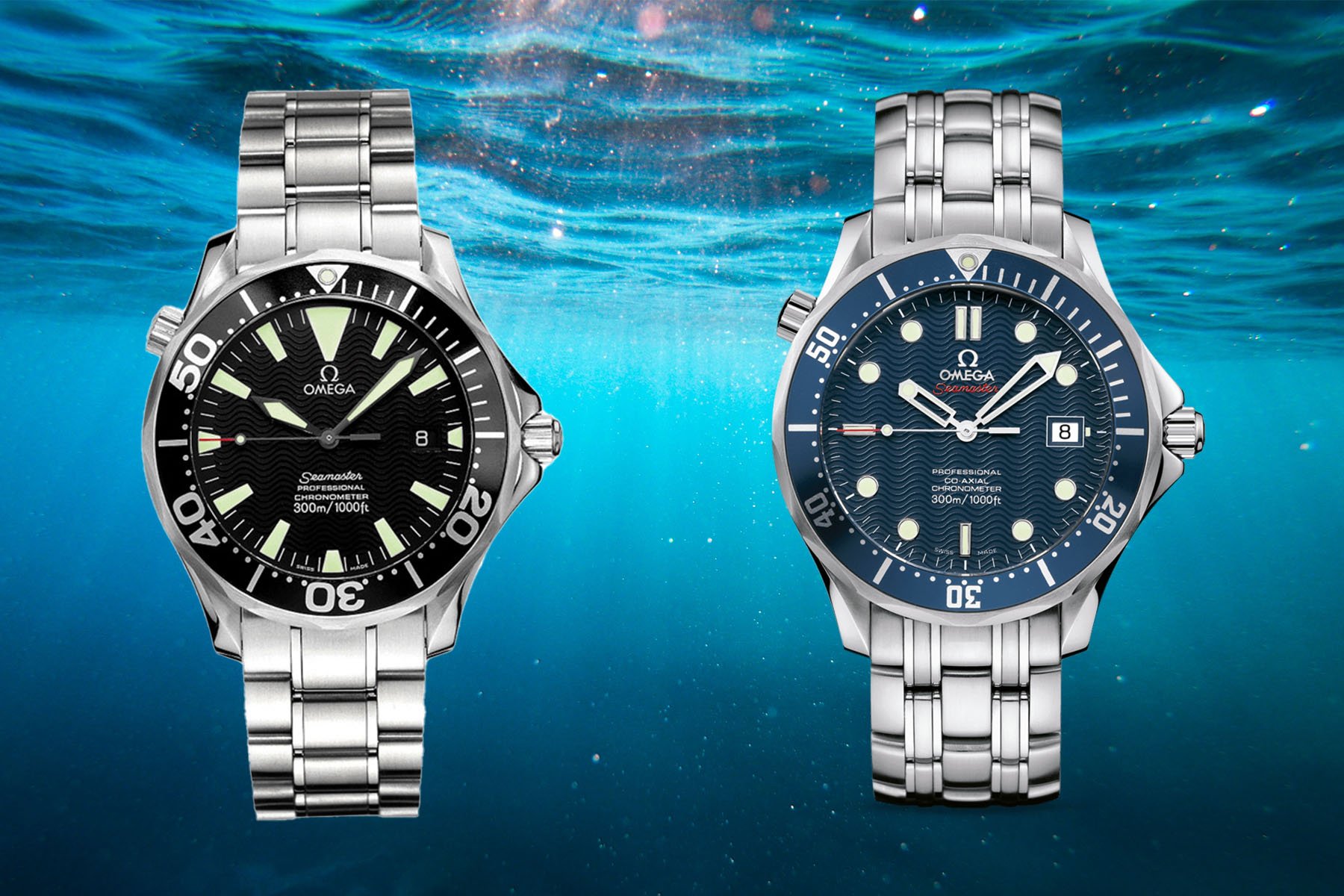 However, the PO is missing one of the details that makes this watch so unique — the extra-large 12 o’clock slice of luminous pizza. Another absent bit of the 2220’s unnecessary luggage is the square outline around the date window. Instead, the black date wheel is almost invisible, with just a white numeral subtly peeking onto the dial at the 3 o’clock position. The signature wave pattern of the dial is also far more subtle in its black incarnation. The final element that is stripped down is the bracelet. The 2254.50 Seamaster uses the old Speedmaster-style bracelet. It’s a bit less busy than the Bond SMP bracelet design. Other than that, all the best ingredients of the Seamaster are there — the scalloped bezel, with its brilliant aluminum insert and bold numerals, and the classic sharp lyre lugs of the case. It’s a timeless, elegant, yet rugged design. 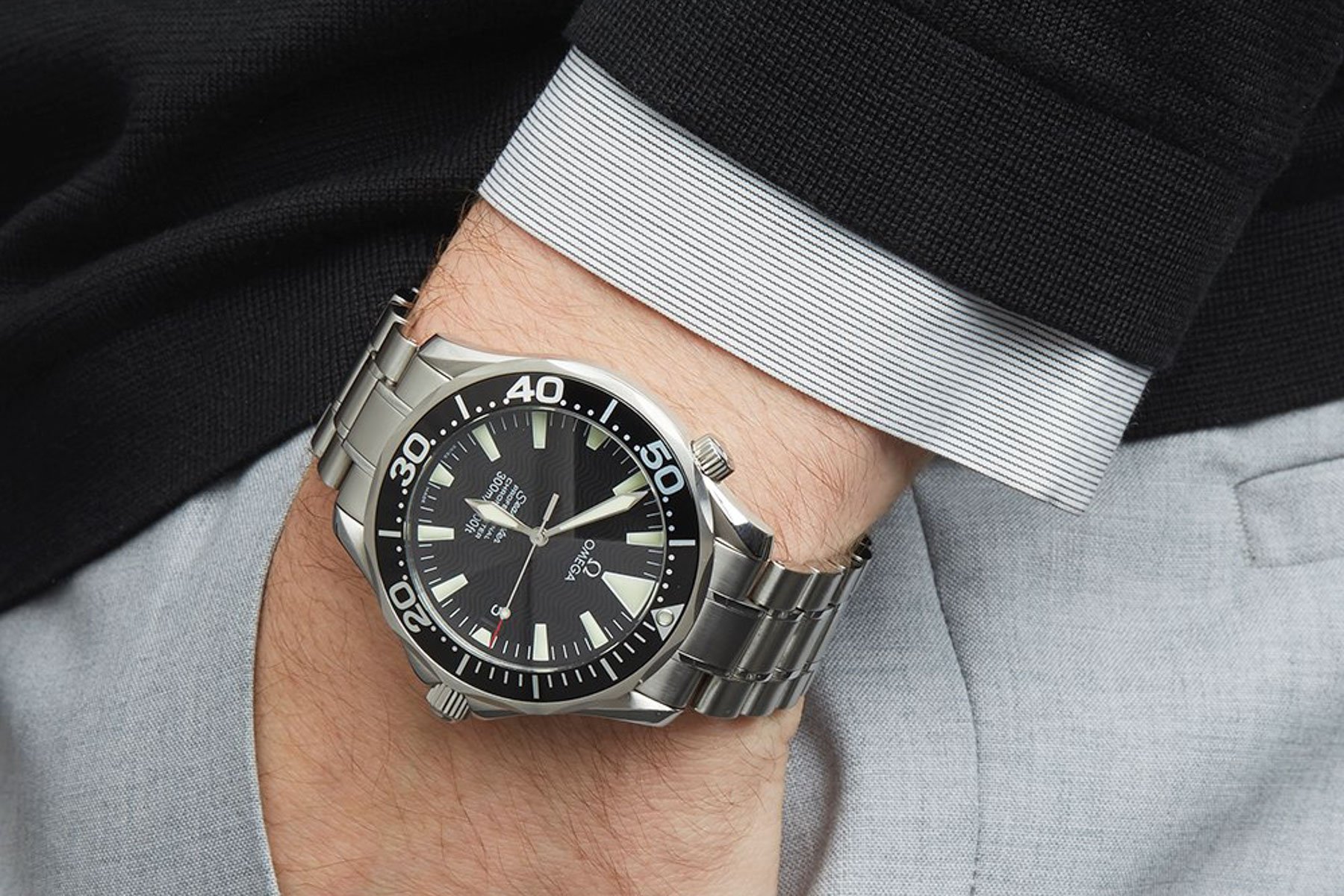 So, how would I like to see the Seamaster 2254.50 return? Not as it was, but as it would be today. The answer to this question might be somewhat underwhelming, but I think Omega has built one of the best modern dive watches on the market today. The Seamaster Professional has come a long way since the first wave-dialed model of 1993. And as much as I’m a big fan of the old-school charm of the smaller waves and aluminum insert, I would want them to go all the way in bringing this one back. Just give me the current-day SMP 300M in black (210.30.42) but with the signature big lume plots and sword hands. Keep the laser-etched wave pattern on the ceramic dial, as well as the ceramic insert. And if the old Speedmaster 5-link bracelet is out of the question, then one of Omega’s brilliant rubber straps will complete the look perfectly. 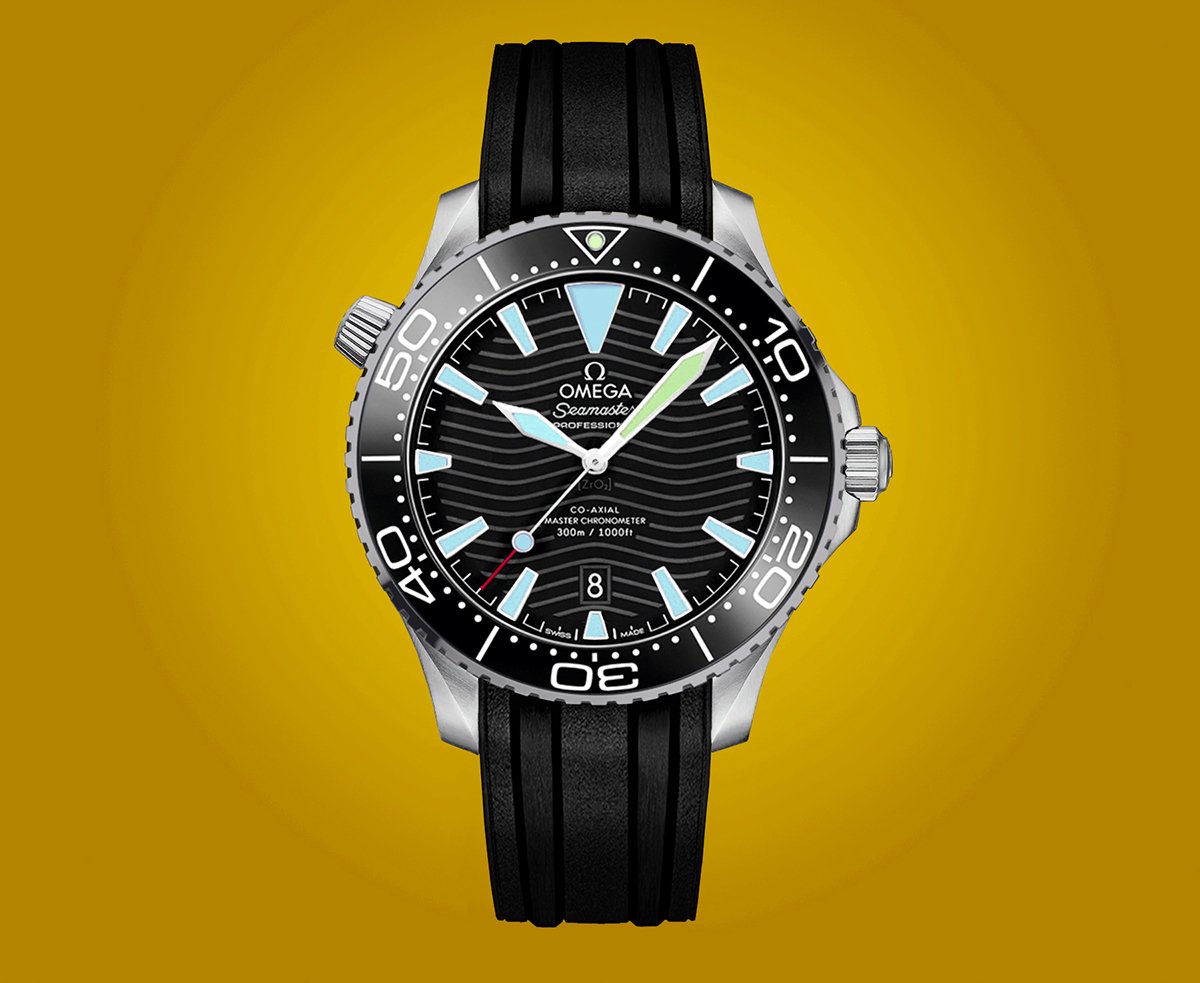 Above you see a render made by @dixanwatches on Instagram. As you can see, these classic design elements translate perfectly to the modern Seamaster Professional model. So is a return of the “Schwerty” that unrealistic? I hope not! The new-Schwerty would also feature the current-generation Master Chronometer Calibre 8800. It would make it not only an incredibly good-looking dive watch but one that also brags an excellent movement rated to the highest standards of timekeeping. Though there’s something charming in the simplicity of the original’s caliber 1120 (which is still a chronometer-rated movement), it would be a shame for Omega to skimp on the movement. 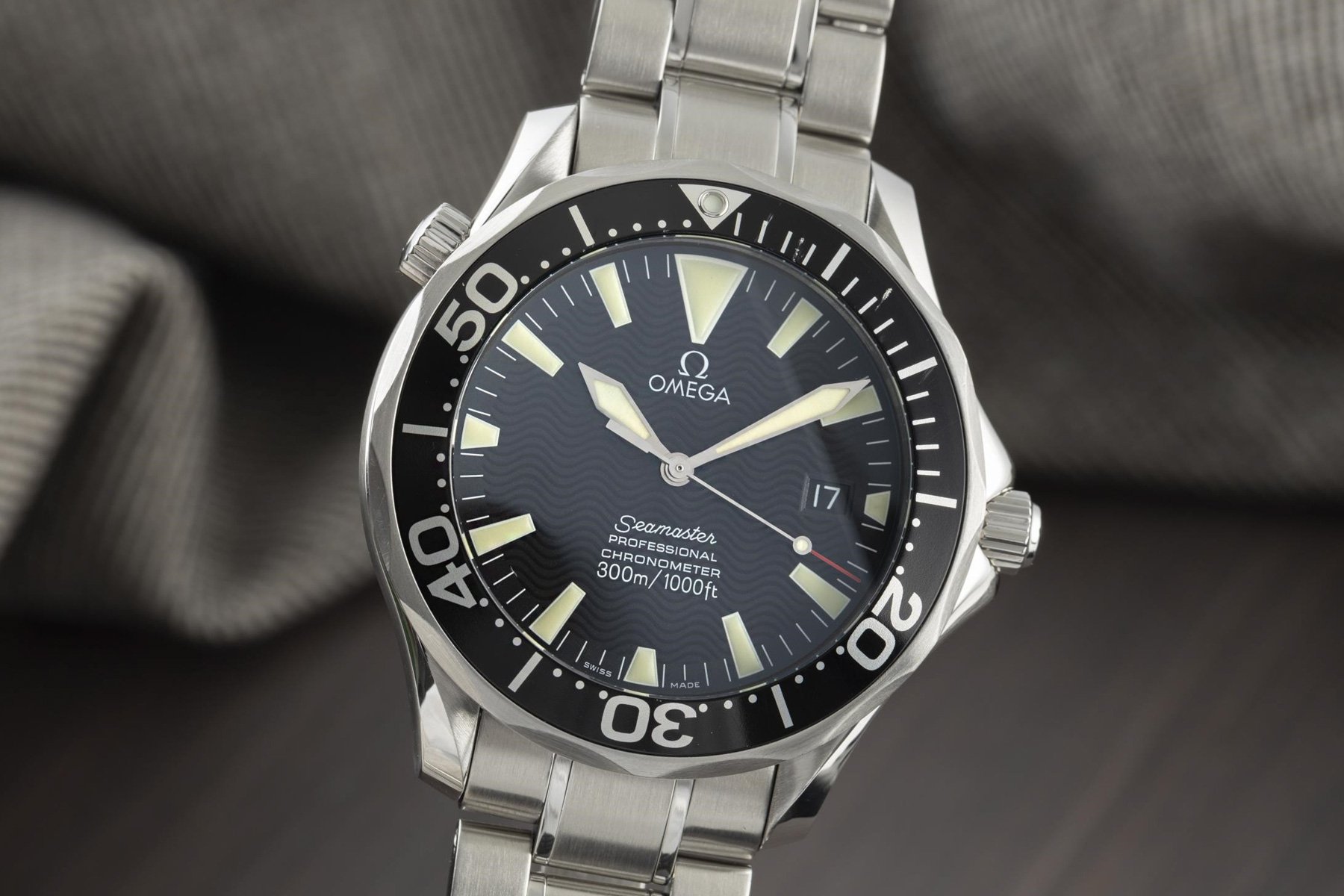 There you have it, dear Fratelli. Am I totally mad and alone in thinking that the Omega Seamaster 2254.50 and its brilliant sword hands and dial layout are long overdue for a comeback? Or do you agree? Make sure to share your thoughts in the comments down below. For now, all I can do is to cross my fingers, hope for the best, and continue to send anonymous letters to Omega’s upper management requesting its return. Each written with a different pen, and using different handwriting… I’m only joking, of course. But a part of me hopes that the lovely people over in Biel will take note, and make this watch journalist happy someday in the not-too-distant future. Meanwhile, here are some more lovely pictures of the 2254.50 to keep us satisfied while we wait.

As this series continues though, I’m sure you’ll even see some of your favorite watches from the past come up. And if you don’t, feel free to put in your requests down below. We’re always open to suggestions! Rest assured though, there’s a long list of watches that myself and other members of the Fratello team have fallen in love with that we’d love to see make a return. So tune in every Sunday to check out our picks!

In the meantime, you can find all details concerning the Seamaster 2254.50 on the Omega website.

Hot Topics
Introducing: The New Seamaster Professional 300M 60 Years Of Bond — With A Special Animated Case Back
105 comments
Are You Still After An Omega × Swatch MoonSwatch?
85 comments
It’s Time To Invest In A Dress Watch — Our Picks From Breguet, Omega, Grand Seiko, And More
72 comments
The Rolex Waitlist Conundrum — How Much Will The Price Of Your Watch Increase While You Wait?
50 comments
The Best Omega Speedmaster Watches Of 2022
40 comments
Popular
Rolex GMT-Master History And Overview Of All Major References
Robert-Jan Broer
18
#TBT Seiko H558 Arnie – One Serious Diver
Michael Stockton
25
Hands-On With the Seiko Prospex SRPC91K1 – Save The Ocean
Robert-Jan Broer
15