Visual Complications from The Past: Cartier Pasha Day & Night

Before we come to this about 18 year old Cartier Pasha, you should know that (until about 10 years ago) the production of Cartier watches was done very differently than it is today. It was  around 2007, when there was a complete change in the way of working and that the production of actually everything, was re-arranged at Cartier.

When Cartier finally decided not to rely on third parties anymore (for calibers and parts), they built a huge 30.000 square meters vertically integrated manufacture in La Chaux-de-Fonds. Cartier also hired new staff and appointed the right people to do the job. Carole Forestier-Kasapi (responsible for the development and creation of the movements and already on board since 2000) and her team redesigned and streamlined the watch production process.

Today, Cartier produces one movement after another, from the basic 1904MC automatic caliber to the impressive Calibre 9454MC (Mysterious Double Tourbillon). All made in the Cartier Manufacture in La Chaux-de-Fonds. But that’s not all. All parts like sapphire crystals, hands, dials and bracelets etc., are entirely made and assembled in their manufacture in La Chaux-de-Fonds. Cartier’s tourbillon models are assembled in their atelier in Geneva, enabling them to obtain the ‘Geneva Seal’. 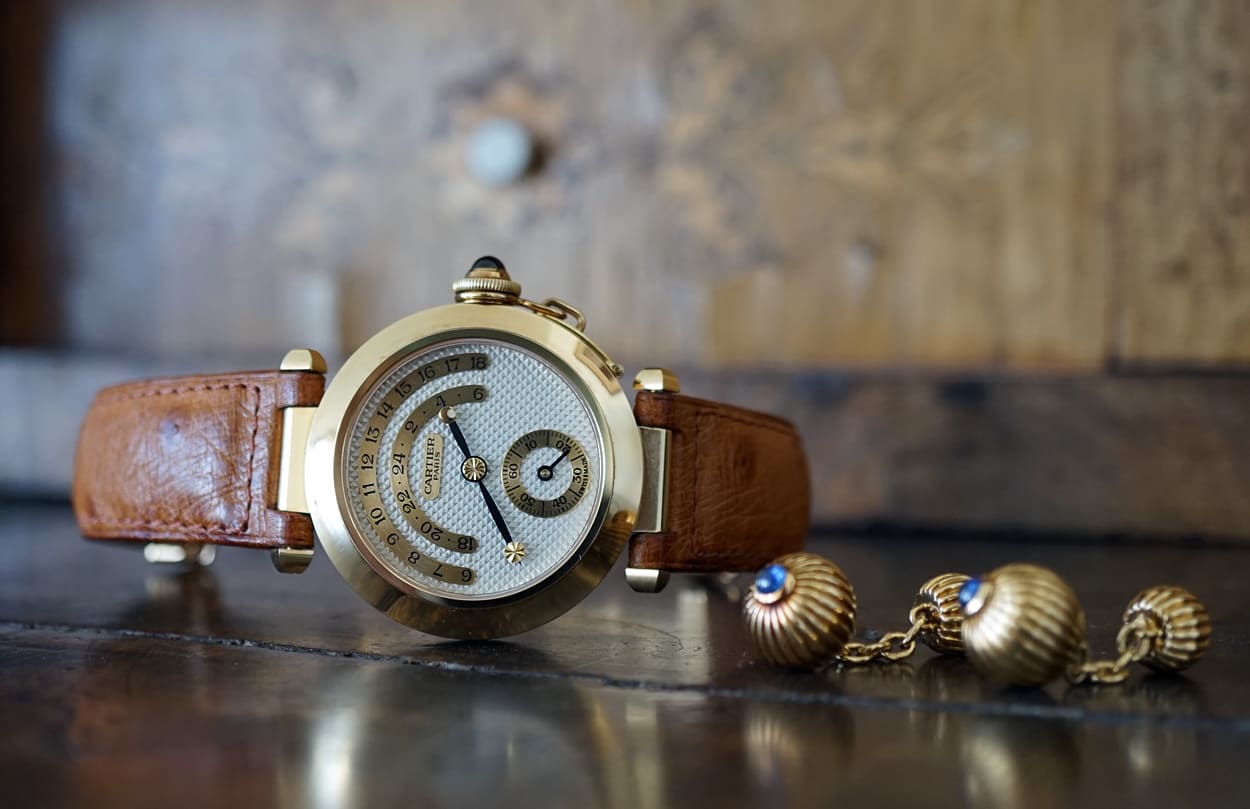 – The Pasha and matching cufflinks –

Before this time Cartier did not made everything in house, and yet  still had a great collection of watches. This ‘Cartier Pasha Day & Night‘ we have here is an exceptional piece and a perfect example of how La Maison worked in the eighties. Together with famous independent watchmakers and designers.

When Cartier decided to create a larger sports watch for men, almost every single timepiece in the collection was small and dress oriented. Only the steel/gold Cartier Santos of 1978 was a more sporty watch. It must have been around 1982 when Cartier briefed top designer Gérald Genta to help with the creation of a sports watch, One that needed to be masculine, sportive, water tight, but….. with the elegance Cartier was so well-known for.

Gérald Genta, world famous for his design of the Audemars Piguet Royal Oak and the Patek Philippe Nautilus, understood a briefing like this very well and came up with a design that looked at first  a bit like a port hole. It also had the typical Vendome lugs that were designed by Louis Cartier in 1932 and had a very dominant crown, bearing the typical Cartier blue sapphire. The crown is actually a cap that protects the real crown that’s underneath, from water, during swimming. 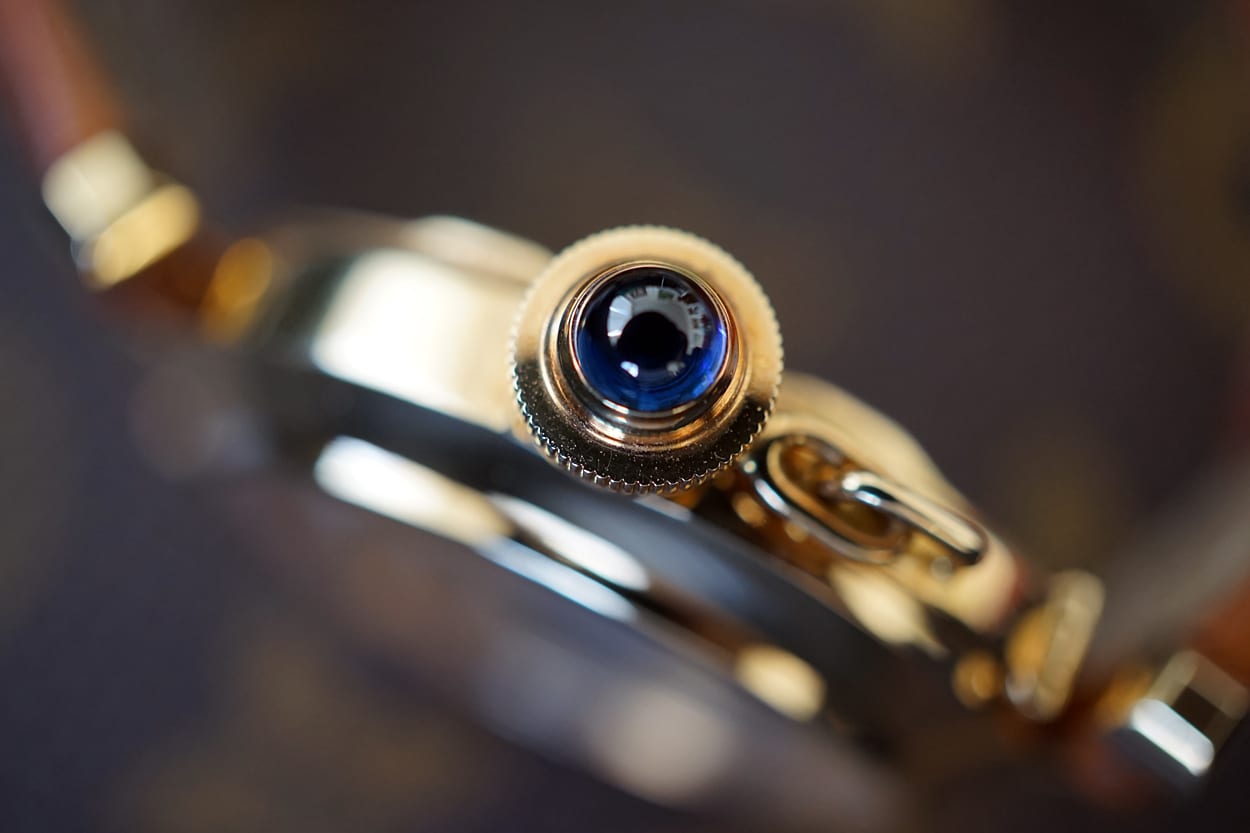 – The bold crown set with a sapphire –

The case was 38mm and that was really large for that time and especially for an elegant brand like Cartier. Several different Cartier Pasha models were officially launched in 1985, even a version with a grid! About ten years later (when the Cartier Pasha line was selling very well) Cartier approached independent watch maker Svend Andersen to come up with a ‘Day & Night’ system. The concept of a ‘Day & Night‘ indication is typical Cartier and was found in several Cartier clocks from the 1930s. 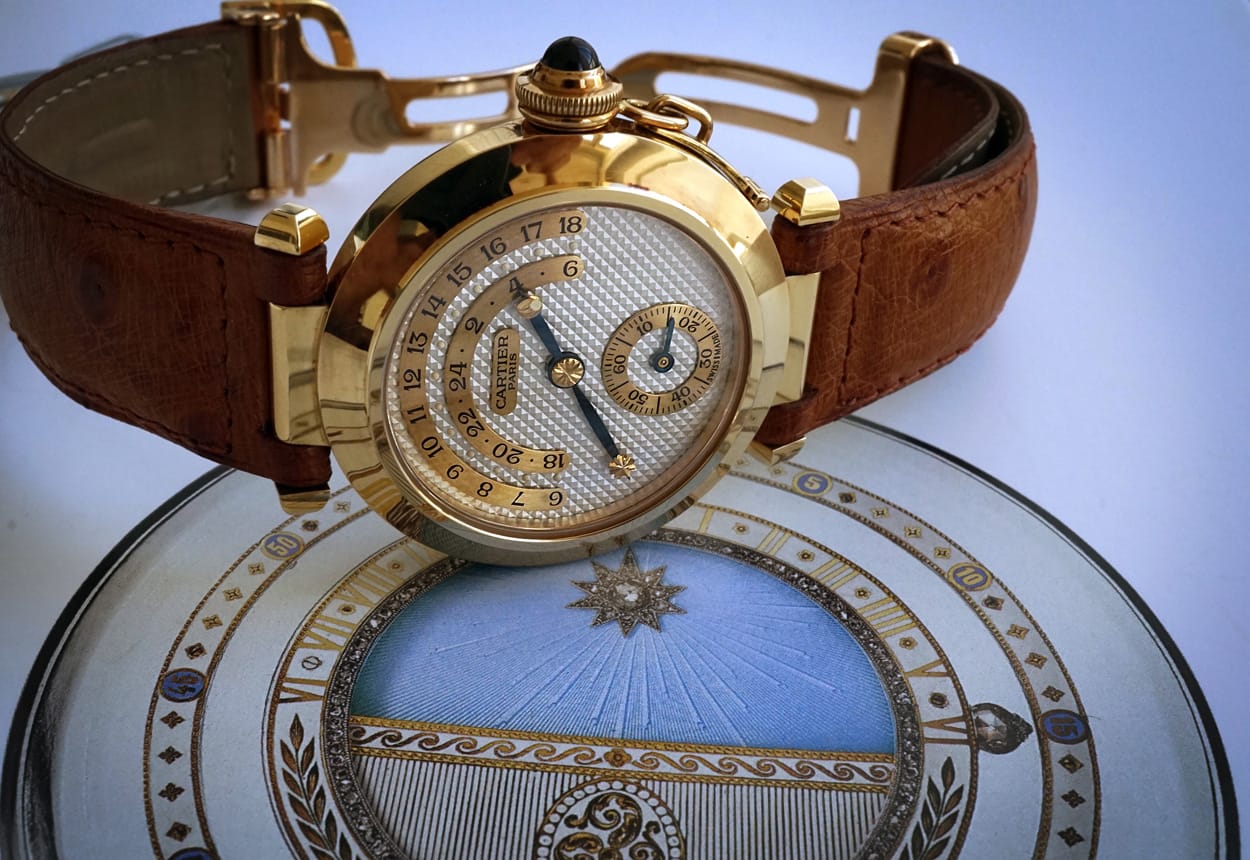 With that in mind, Anderson came up with his ‘Day & Night’ version and designed the 24 hour scale over two rows. Using one large hand that had a sun on the longest side and a moon on the shortest side. When the hand with the sun passes the 18 hour on the upper scale, the shorter part of the hand with the moon, starts again at the lower bow indicating the hours between 18 and 6 (6PM and 6AM). 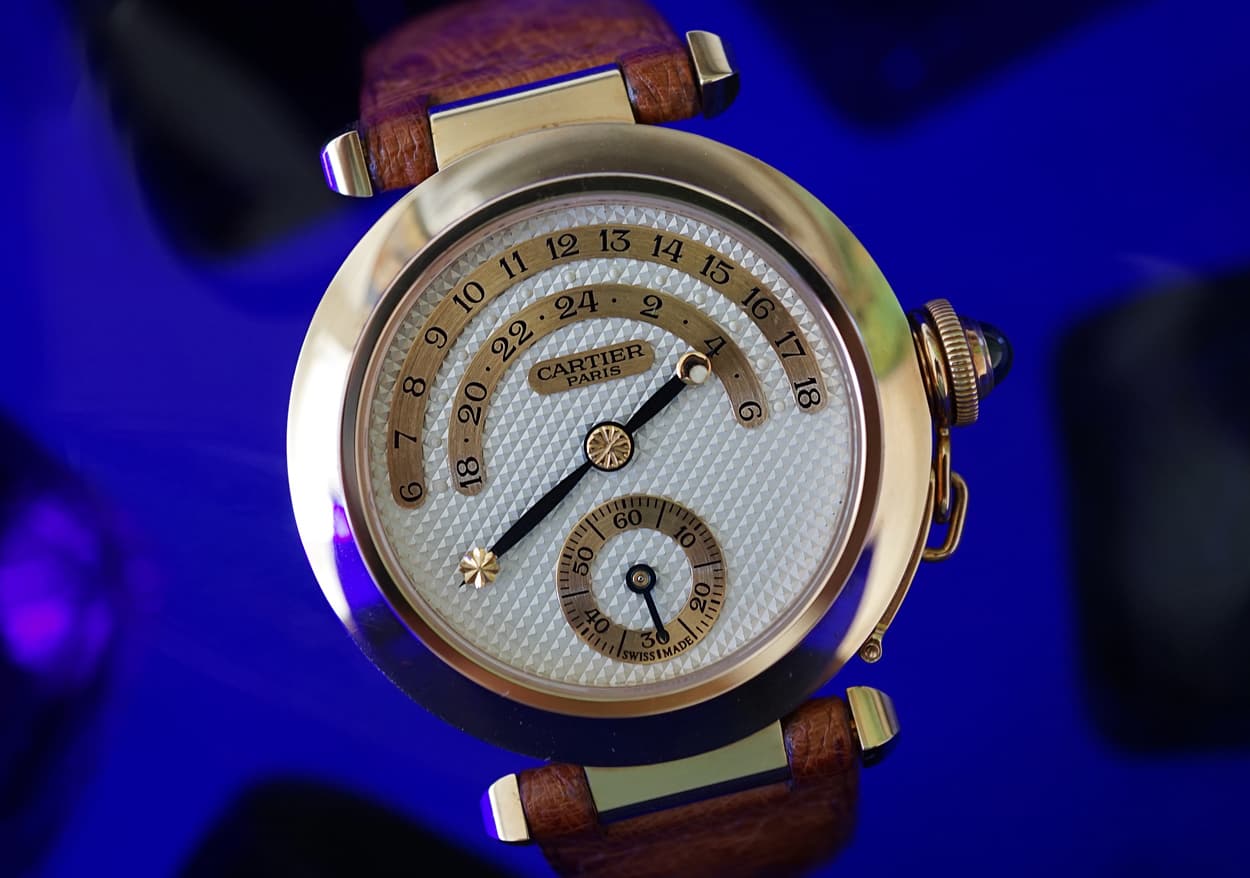 But beware, the sub dial at six (normally meant for seconds) is here indicating the minutes!  All this spectacle is directed by the Automatic caliber 15 by Frederic Piguet. 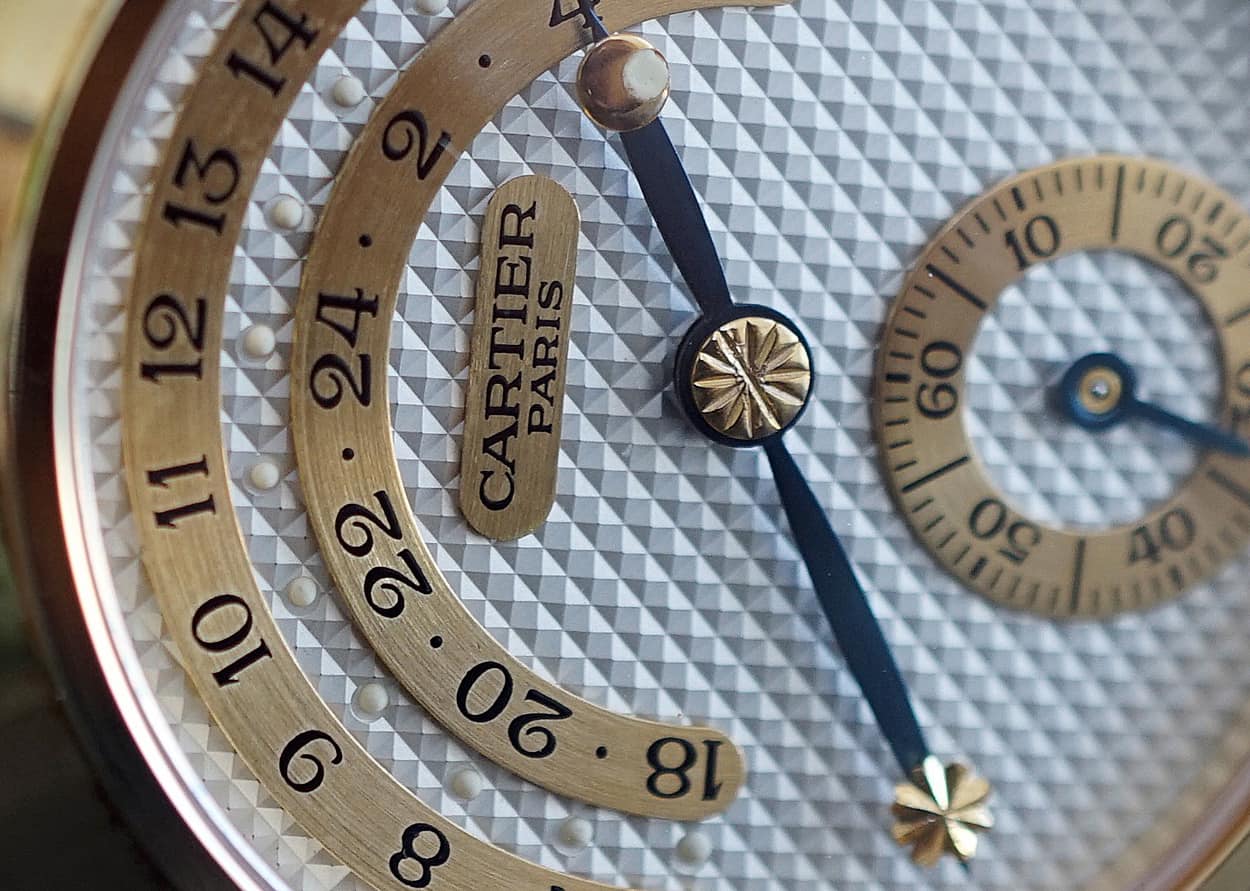 The very nice ‘Clous de Paris’ pattern dial looks rich with the applied brand plate with Cartier Paris and the hour scales made in 18k yellow gold. Through the transparent back, the decorated caliber 15 shows off its CPCP wall paper engraving. A motive that was used between 1998 and 2008. 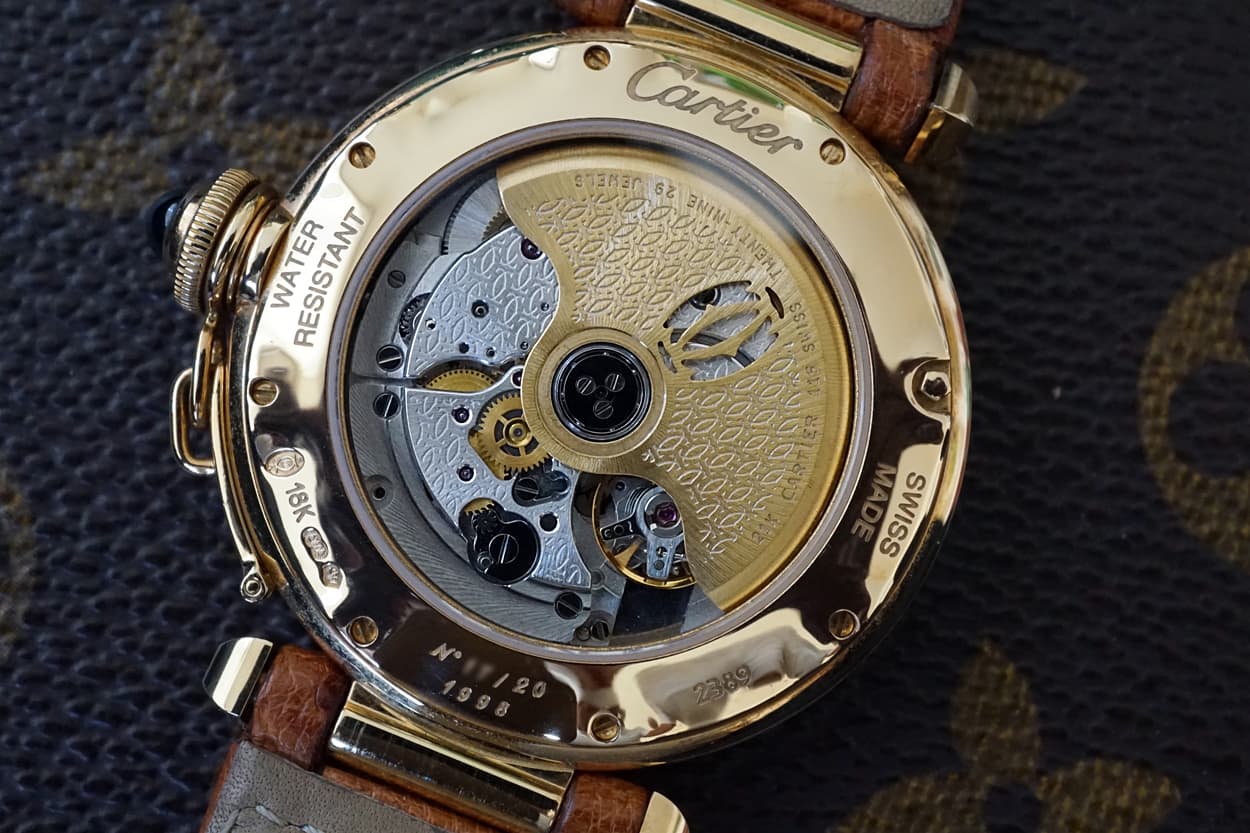 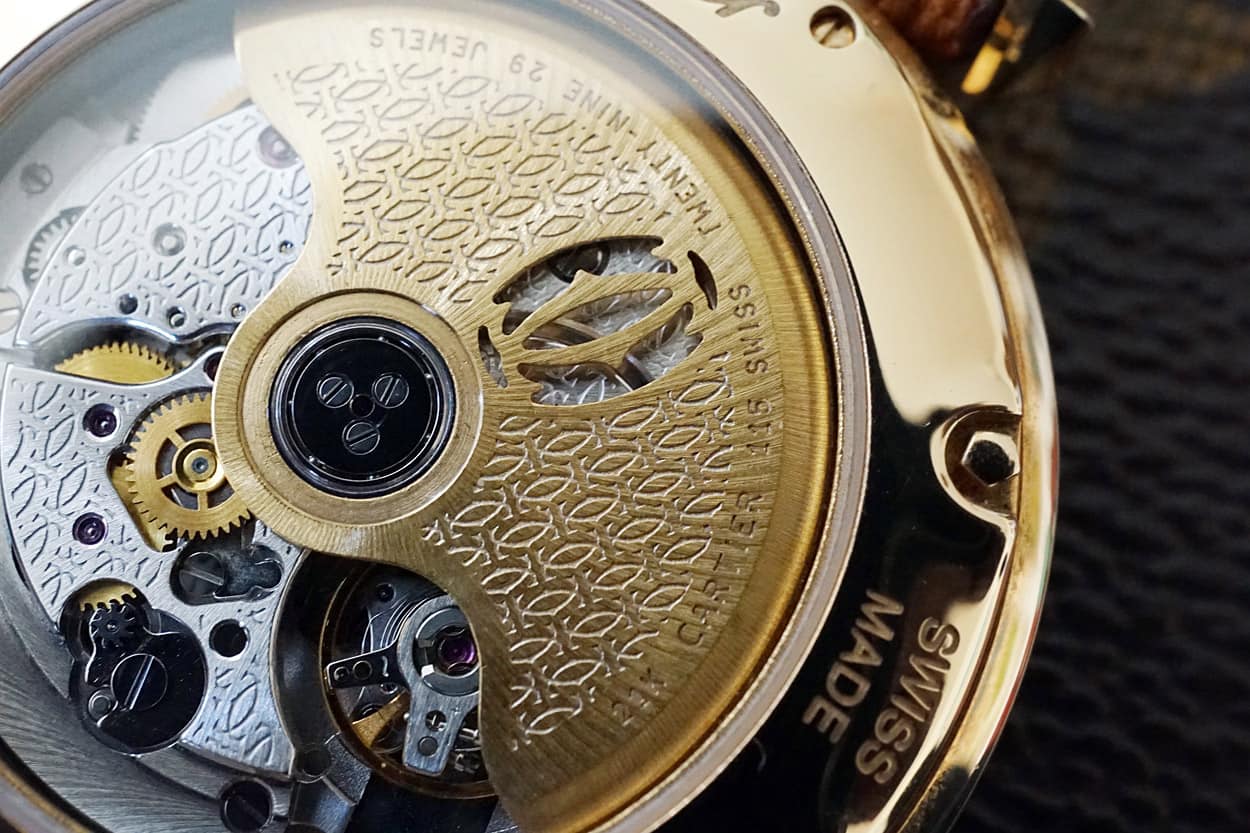 – Collection Privée engraving on the rotor and movement –

When we talk high-end or ‘special’ watches (prior to their Manufacture in La Chaux-de-Fonds), Cartier was hiring specialists from outside, to spread and extend the ideas found in the sketch books of  Louis Cartier.

The result in this case, is a historically inspired ‘Pasha de Cartier’ watch with a unique way of telling time, based on the original ideas of Louis Cartier. 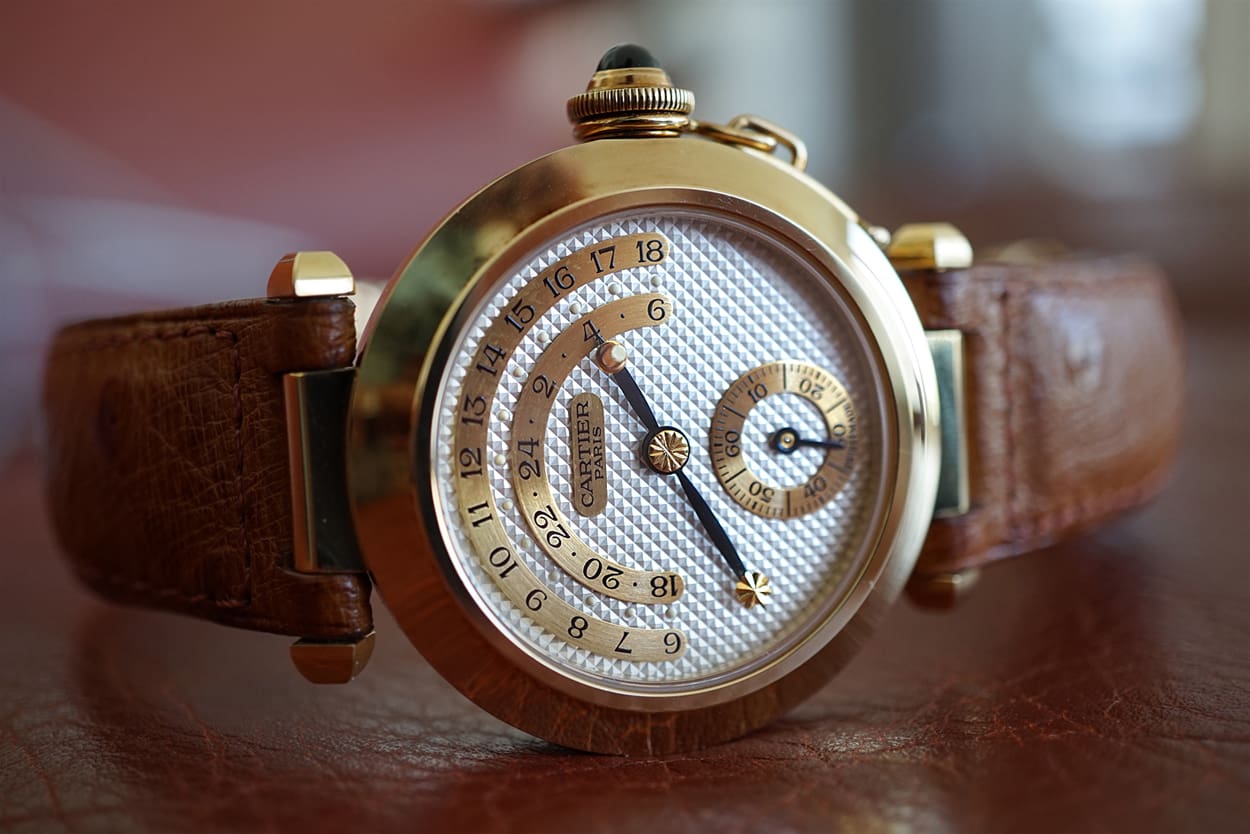 This Cartier Pasha was produced in a very small  limited edition of 20 pieces in each precious metal (yellow-, , white- and pink gold), which all sold out pretty fast during the last years of ‘Collection Privée, Cartier Paris’.

Since 2007, Cartier shows with every collection what they are able to do today and there is hardly any complication that they haven’t created yet. Cartier launched several tourbillon models, minute repeater watches and even a combination of these two. These high-end watches received great reviews over the years. These models can, from a technical point of view, easily compete with other established brands.

In the very  early years however, Cartier also had amazing products to compete with, since the brand scored in particular high among their clientele, with their amazing clocks with visual complications. Mystery clocks and the typical Day & Night pendules were their specialty. Since Cartier invested a fortune in their new manufacture, in highly skilled professionals and in research.

La Maison is not only still able to realize and produce this type of clocks from the twenties, like the mystery clock, that was re released in 2012. The brand is also capable to turn those visual complications, into spectacular watches. Made in their own ateliers in La Chaux-de-Fonds. I may come back on that, in a next article: ‘Cartier’s Visual Complications today!’

Topic of the Week

Why Are There No Stainless Steel Rolex Watches Available?