George Cramer
comments ...
Share
Last week when I came home after a few weeks of traveling and opened one of the smaller cupboards that I hardly use, a little gecko fell on the floor and didn’t move at all. When I picked it up from the carpet, I noticed that it must have been caught between the door and the doorpost because it was completely dried out to the bone. 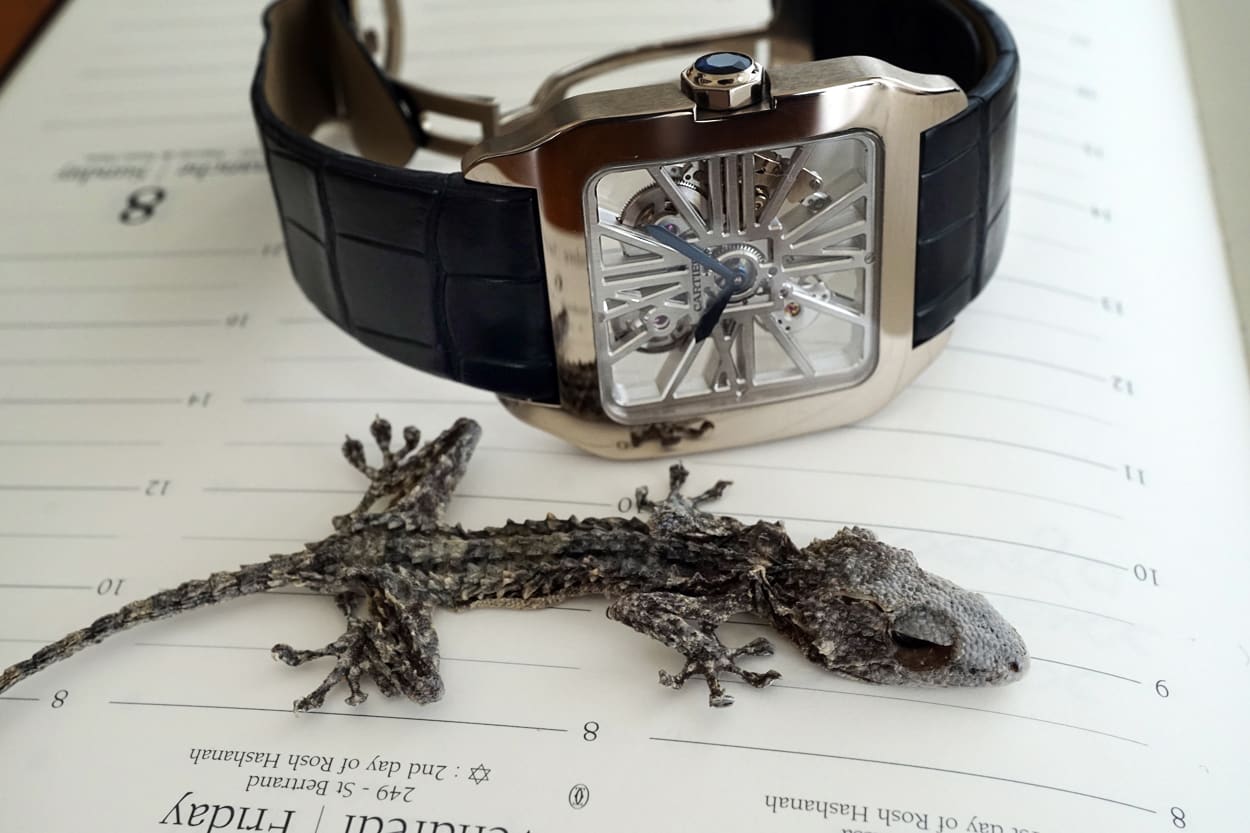 I felt bad, since I had never realized that I shared my apartment with this little gecko that probably has protected me from many mosquitos during the night.  However, it turned him into this beautiful skeleton.
But also when talking watches, skeletons can often be very attractive, especially when they’re stripped down to the bare minimum. The quite busy looking classic skeleton watches that we know since years never really held my attention for longer periods. In a way they’re often too busy for me and I find it hard to read the time, something I still find essential in a watch. 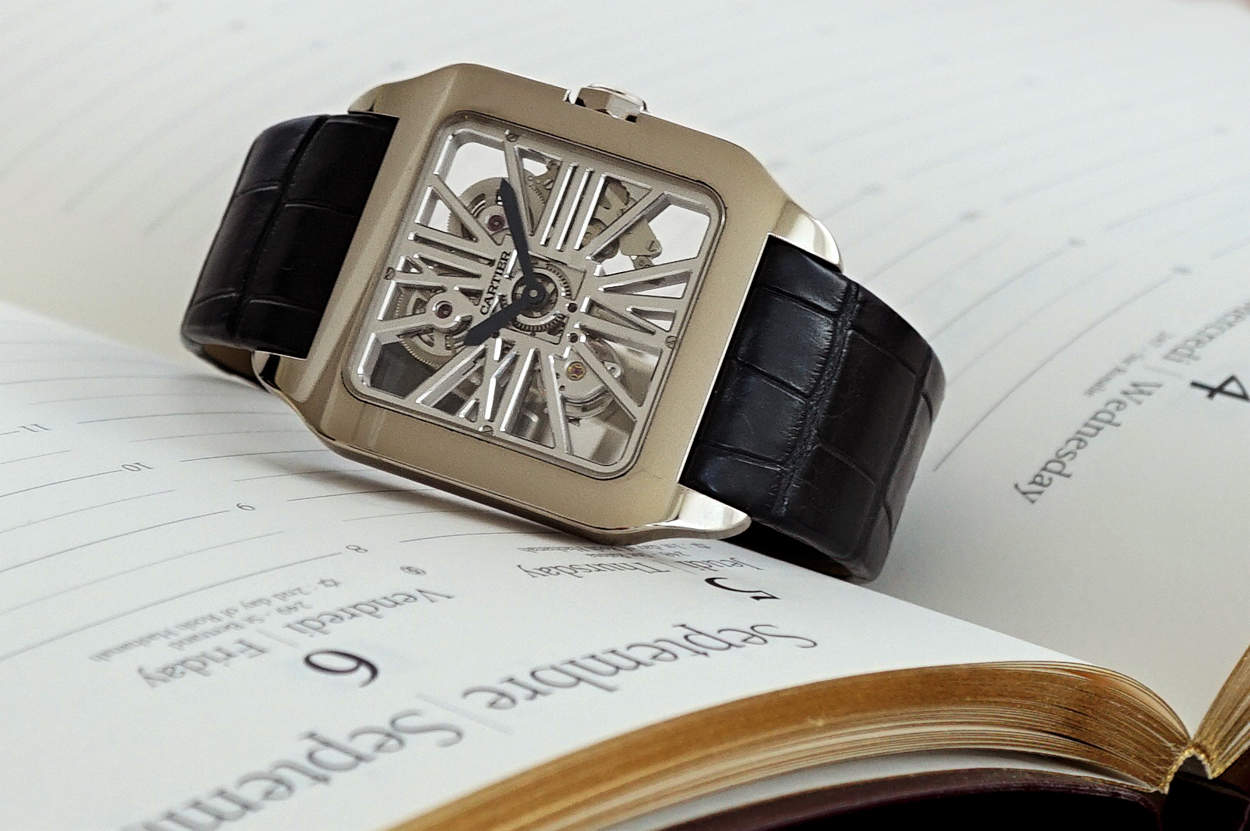 When the Santos 100 Skeleton was released in 2009, Cartier introduced a whole new type of skeleton watch. Now you may wonder, what can be that new? Well, ‘La Maison’ did it the ‘Cartier way’, by designing a whole new caliber completely from scratch; the 9611 MC. 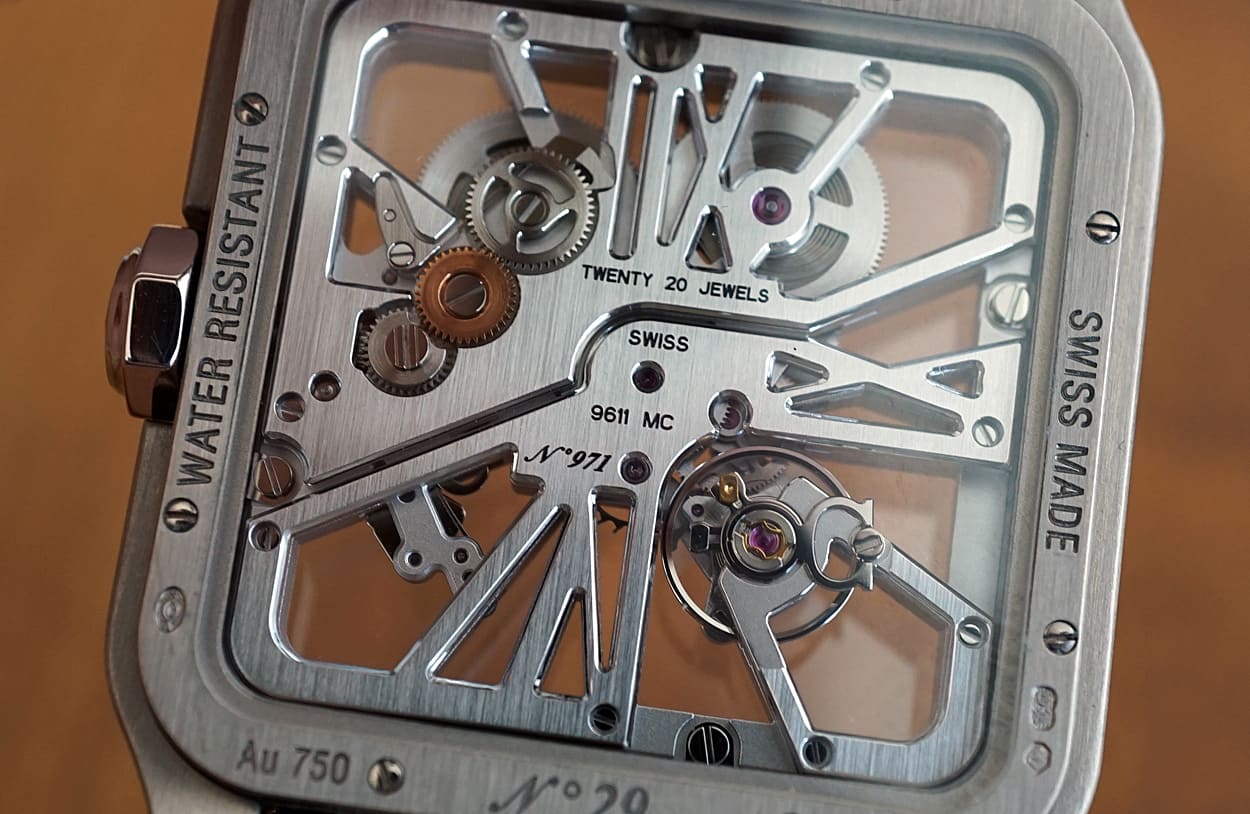 This is a movement that’s designed to be a skeleton, instead of eliminating everything that’s possible from an existing caliber like it was usually done. This way of working gave the watchmakers and designers the possibility to re-arrange the various components and to turn the movement plates into numerals, that became to function as a sort of  see thru dial and what makes this type of skeleton so admirable. 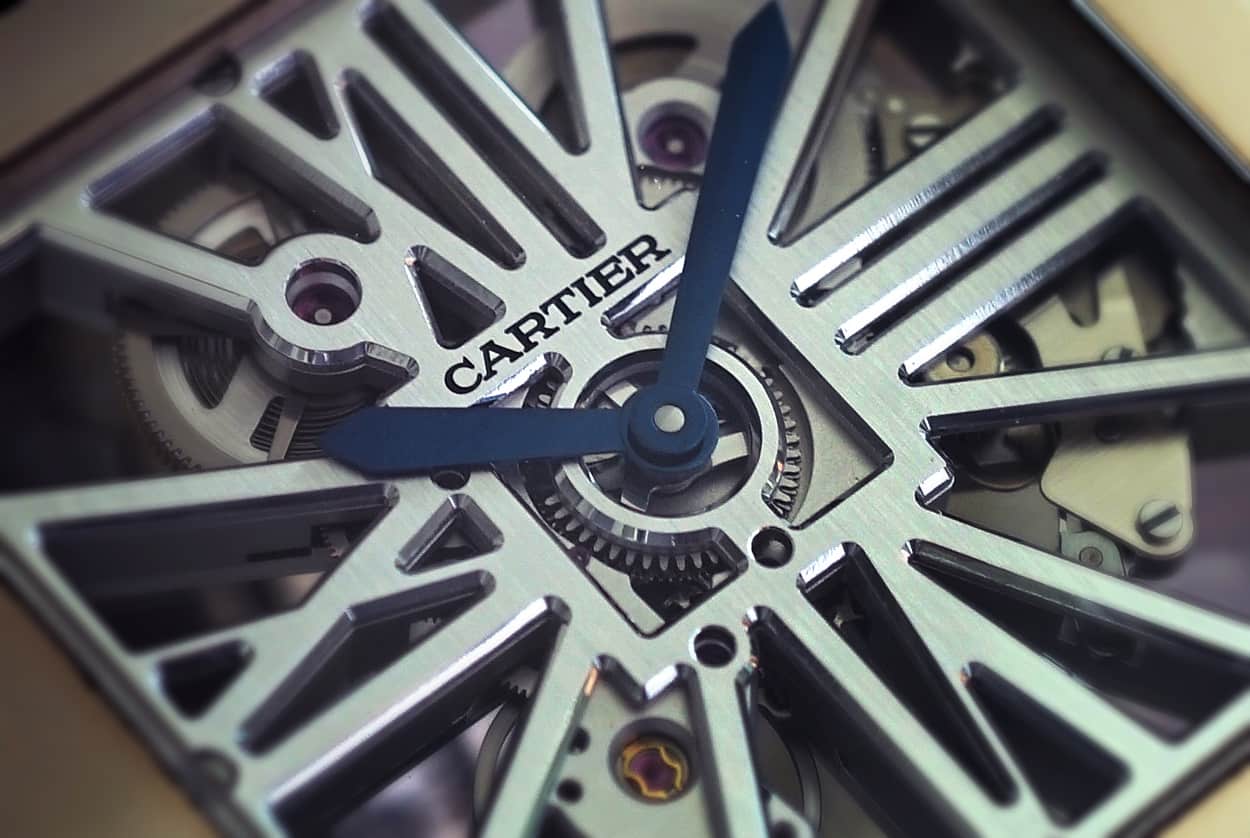 ‘Cut out’ numerals are very Cartier and….already since decades. The brand played already with this concept in the 1940’s with their Rond Skeleton models, where the space between the hour markers was taken away what gave a same kind of see through effect. 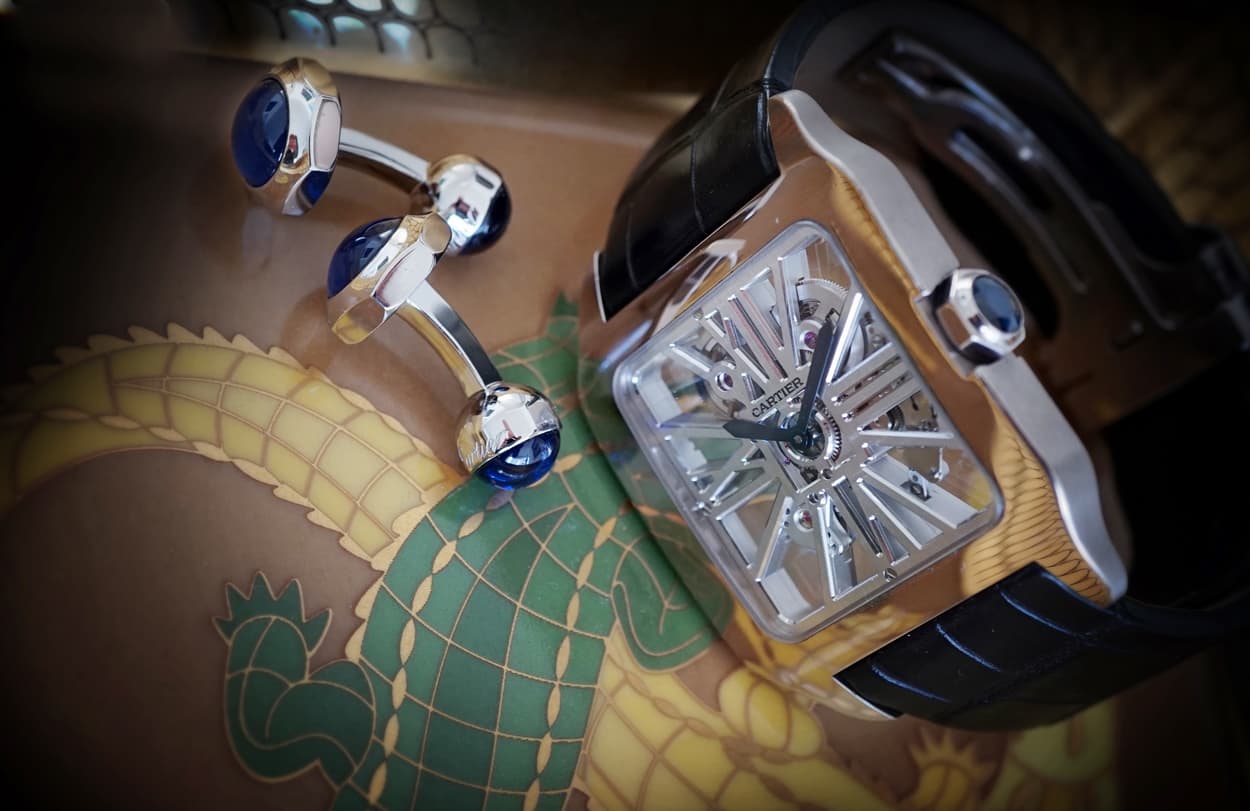 The bold Santos 100 with its extra large case looked very impressive when it was launched, because of its unique style, its robust dimensions and of course because of the fact that it was the first skeleton that was designed this way. But Cartier outdid themselves in 2011, when ‘La Maison’ launched the Santos Dumont Skeleton in white gold. 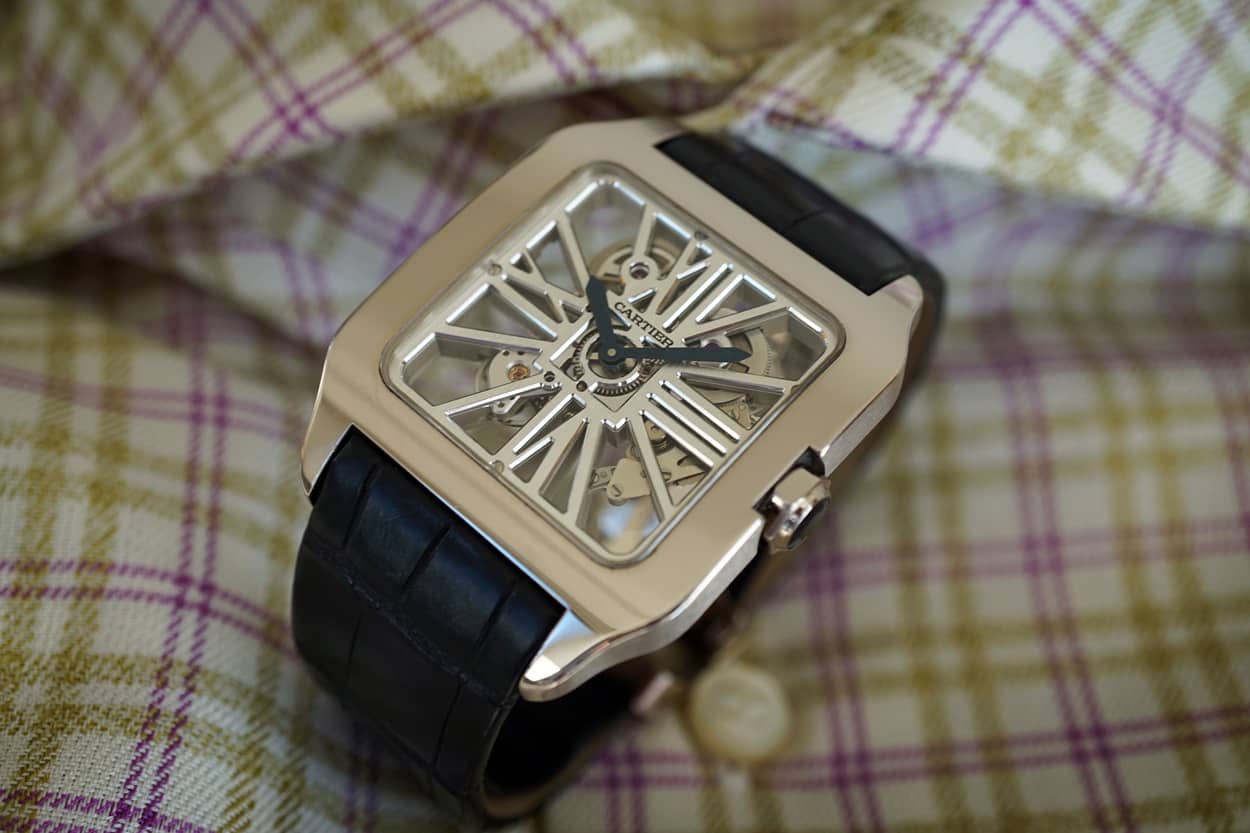 This model has no bezel with screws, unlike the Santos 100 XL and it has the slim smooth case of the Dumont models. All the attention goes to the amazing skeleton dial and the new mechanical movement. The Santos Dumont is because of its modest dimensions of 38.7 x 47.4 mm, more wearable and much less dominant than the Santos 100 XL. Both models share the same mechanical hand wound 9611 MC caliber, that sports a power reserve of 72 hours and was created and developed especially for the Santos models. 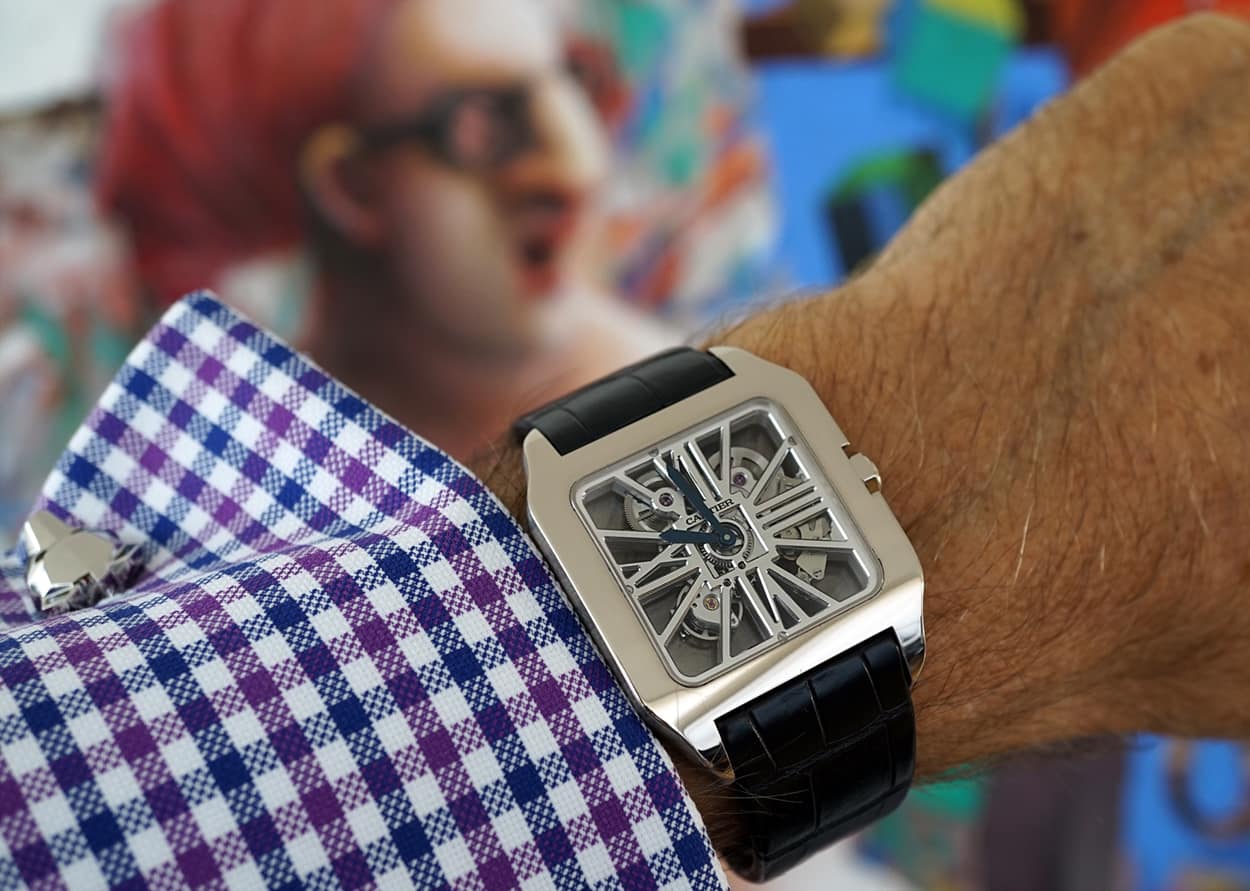 On the wrist the watch behaves like a very comfortable timepiece that shows the time very clearly in a glimpse when the watch peeps from under the cuff. This is thanks to the gorgeous blued hands, that offer a bold contrast above the see-through three dimensional numerals. Without any doubt this is the most gorgeous and eye-catching Santos Dumont that La Maison ever created. It is still discrete enough to wear during business meetings, since the concept of the skeleton dial is not loud. The watch more or less breaths architecture when the light plays thru the openings between the numerals. 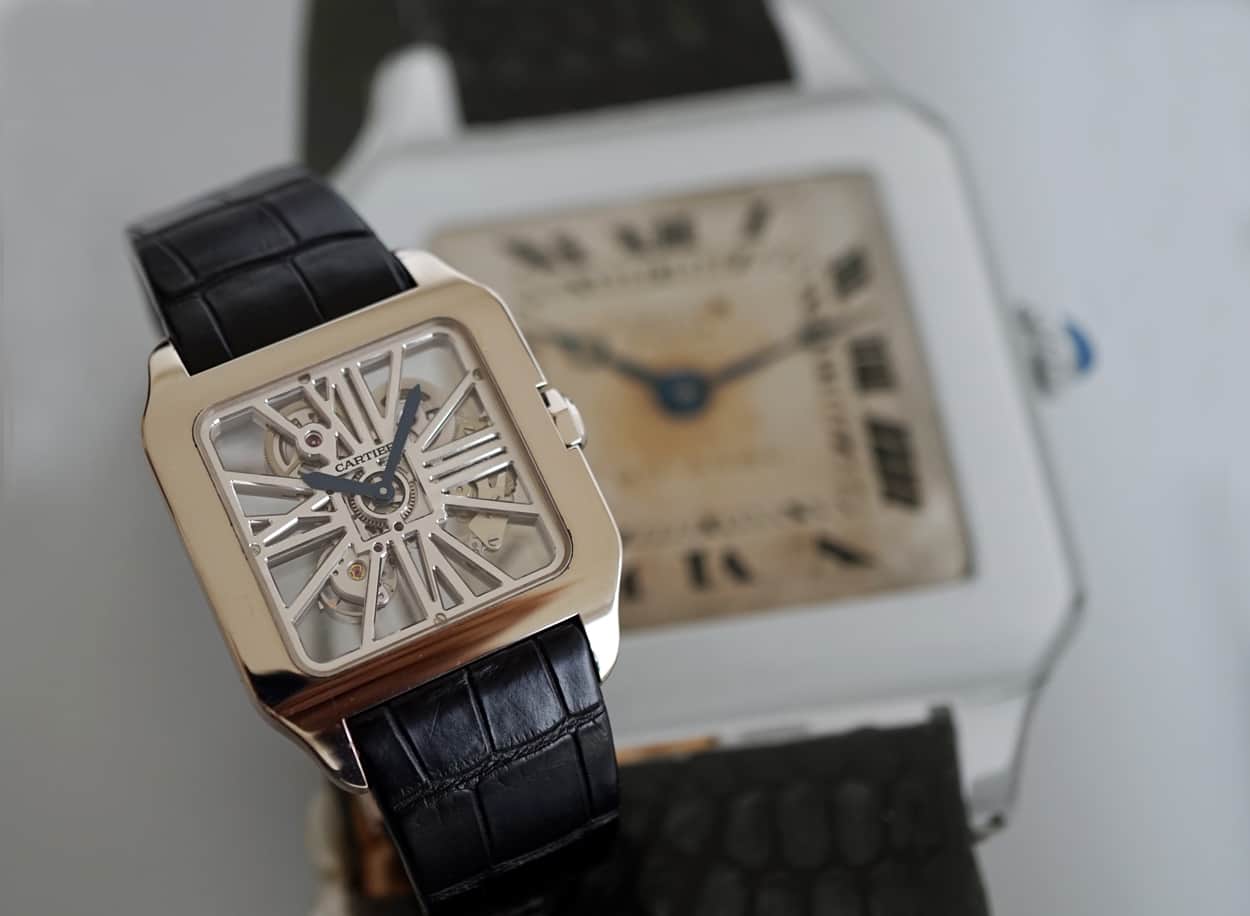 The sleek case of the Santos Dumont skeleton, without the well known bezel and the screws that most of the Dumont models share should be seen as a historic design since the concept was inspired by a model from 1910. (pictured above) 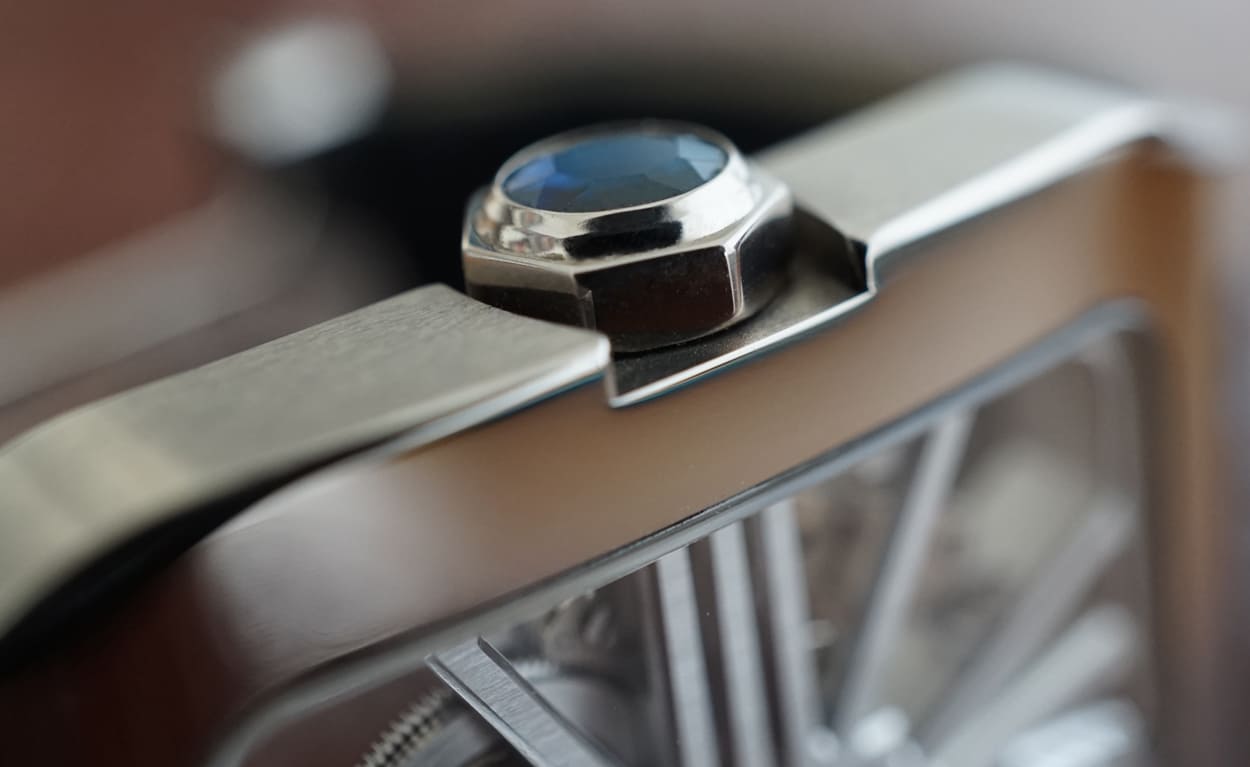 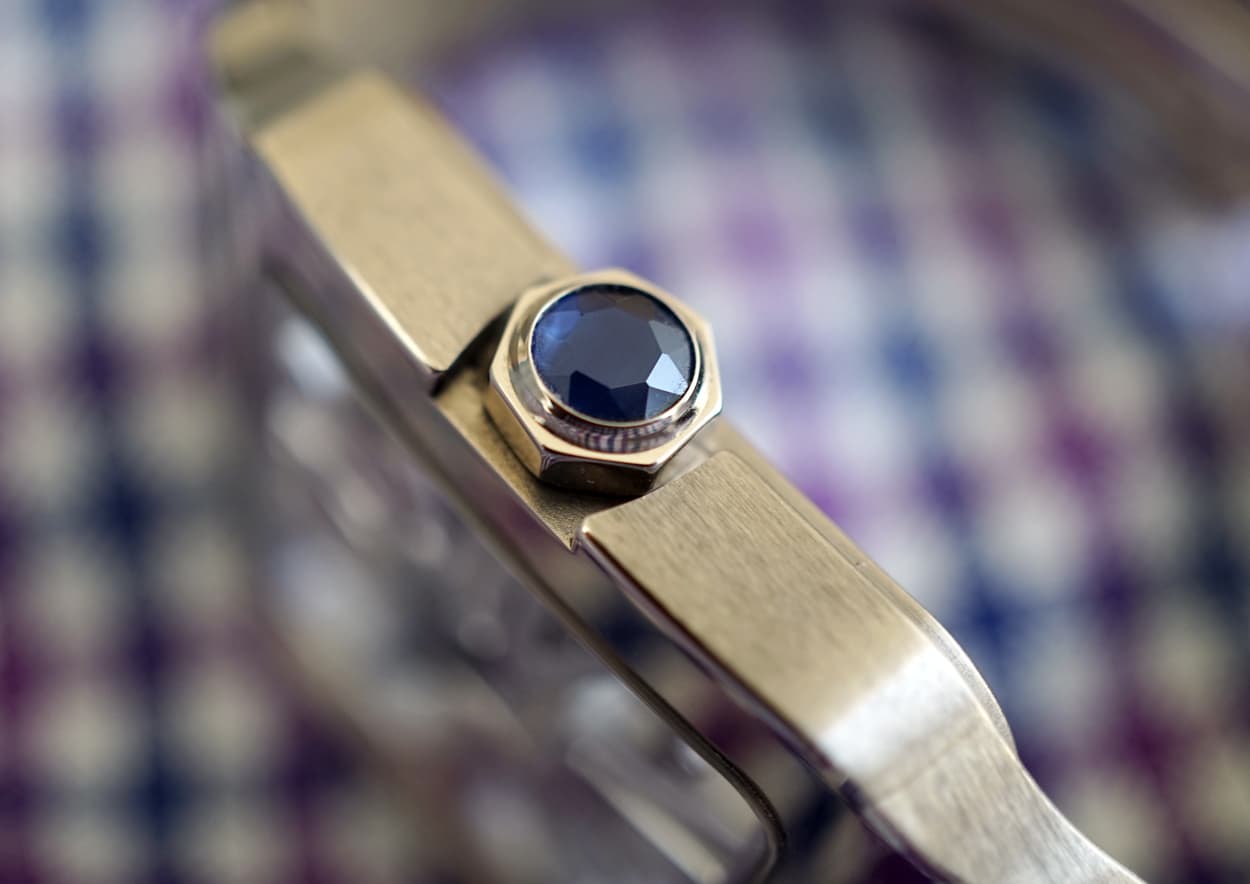 This type of case, with the recessed crown,  (pictured above)  was also used for the 2005 Santos Dumont and the 2013 version with power reserve window both with the TV shaped dial.
Besides the version of the Santos Dumont Skeleton we described here that was released in white gold in 2010, there is a great looking black ADLC coated titanium version available since 2011. The latest version was released in pink gold, in 2012. 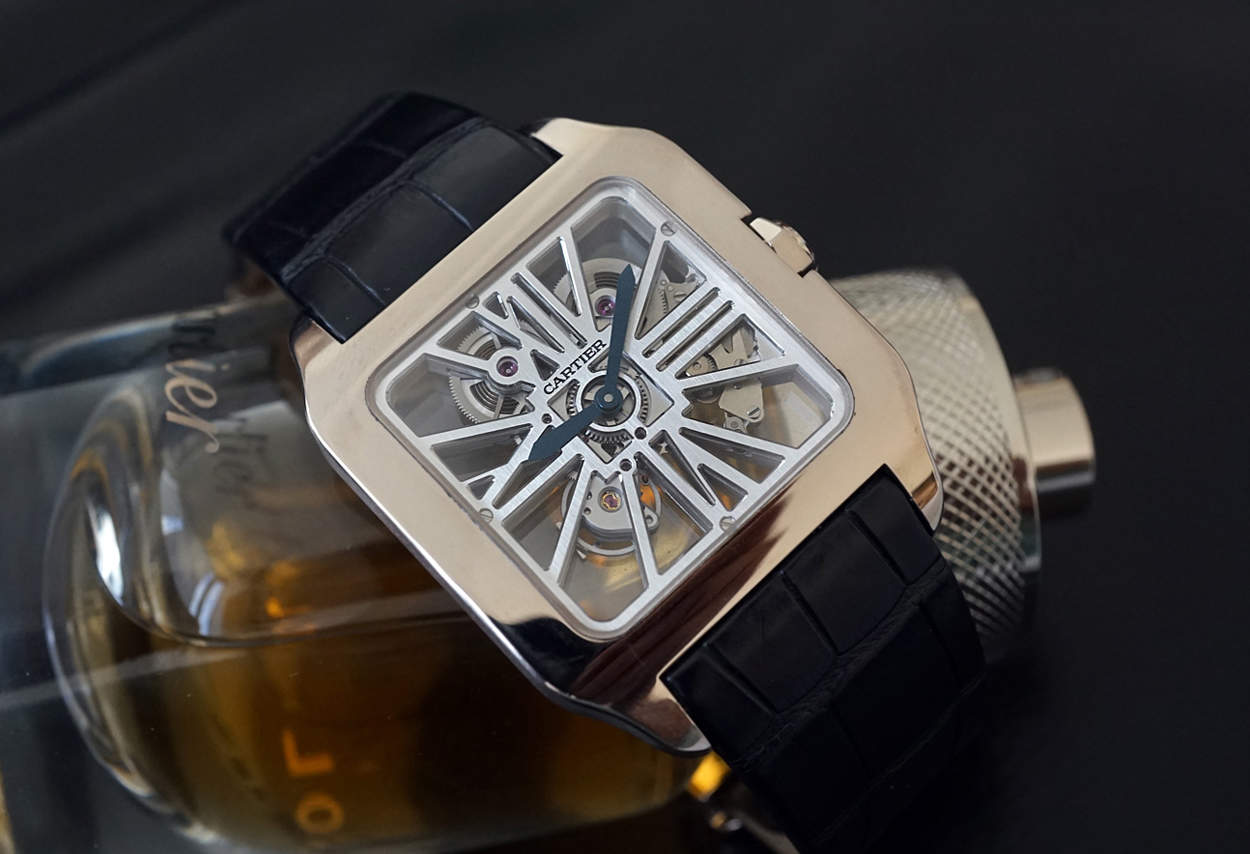 For collectors it is interesting to realize that this very new and modern looking ‘Fine Watch Making’ piece has a lot more Cartier DNA than one might think at a first encounter. And that’s exactly the strength of Cartier and what keeps their vintage and current collections so well together!
Editors
Michael Stockton

Watch of the Week
1

Topic of the Week
Comments