Dutch watch brand Christiaan van der Klaauw welcomed master watchmaker Pim Koeslag as a new owner and technical director last year. The first model to mark his stewardship is an evolution of the Ariadne, a core collection of the 48-year-old artisan brand. The resulting Ariadne Reijersen Collector’s Edition is exclusively produced for Reijersen Juweliers in the Netherlands. This 40mm steel chronograph boasts a moonphase indicator and a triple calendar, and it is available with either a turquoise or salmon-pink dial. Each dial version is a limited run of 50 pieces. 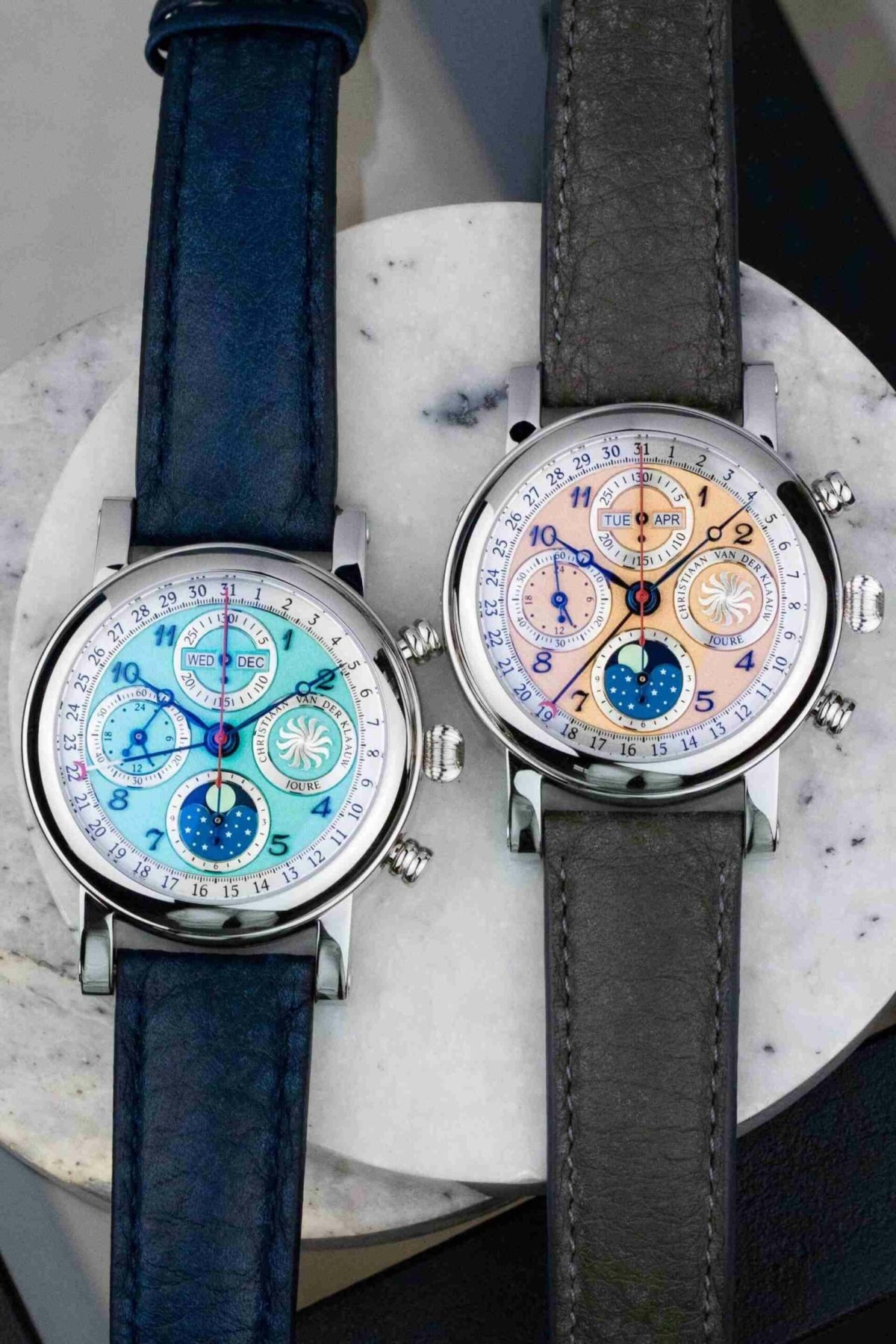 Christiaan van der Klaauw, or CVDK for short, is renowned for its specialty of hand-crafted astronomical watches. In 2021, its CVDK Planetarium Eise Eisinga won the Calendar and Astronomy Watch category at the Grand Prix d’Horlogerie de Genève (GPHG). As a Dutch independent watchmaker, Christiaan van der Klaauw was in the same league as Svend Andersen and Kari Voutilainen. In 1989, he became a member of the prestigious Académie Horlogère des Créateurs Indépendants (AHCI). However, he passed the torch in 2009 to husband and wife Daniël and Maria Reintjes, who have masterminded several award wins for the brand over the years, including the aforementioned GPHG. 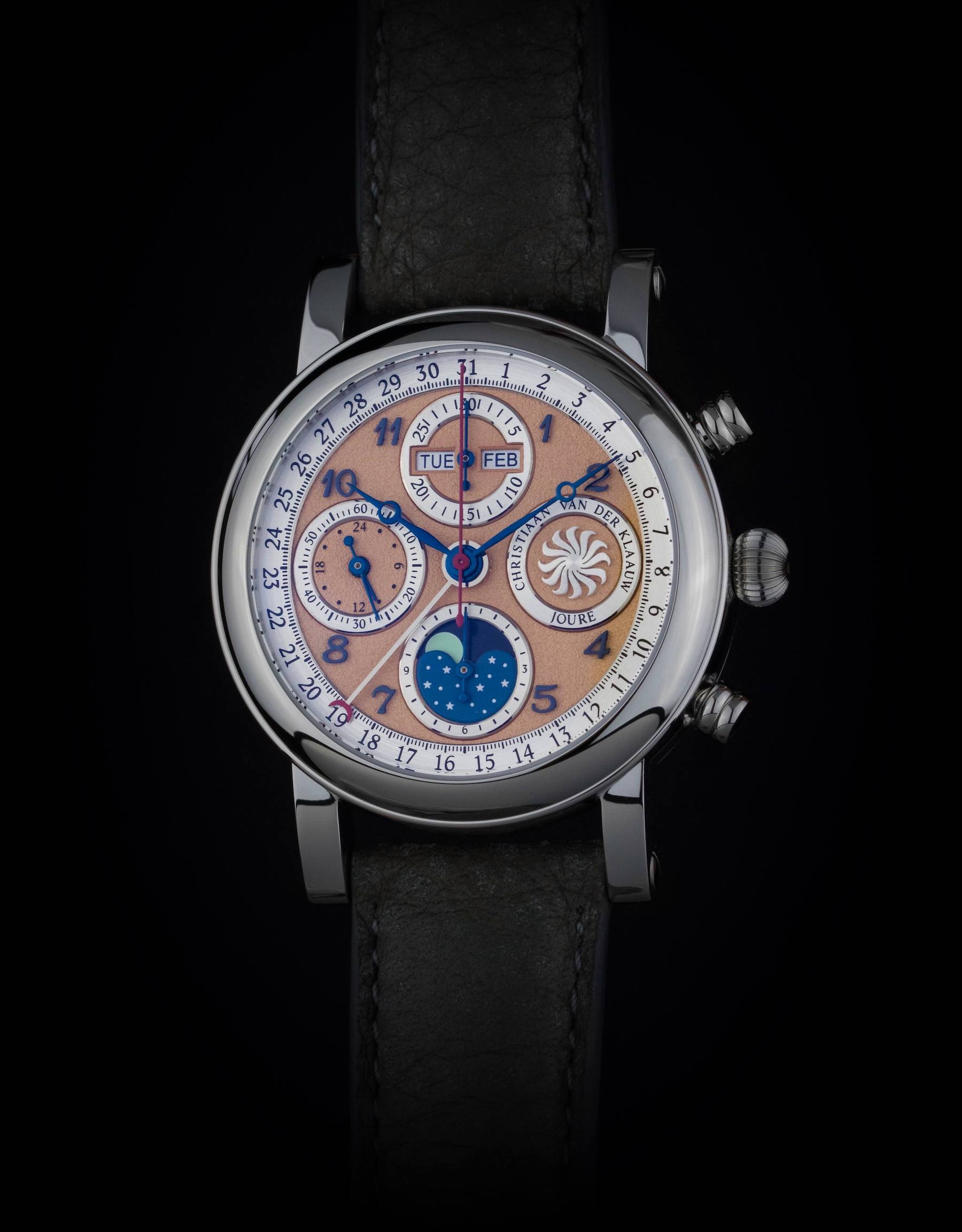 Fast forward to 2022, and the Reintjeses found their successor in fellow Dutchman Pim Koeslag, who acquired a majority stake in the brand. After spending almost two decades at Frederique Constant as technical director and building up the upscale brand Ateliers deMonaco as co-founder and later CEO, Koeslag came with high-profile credentials. At the age of 40, Koeslag brought with him not just his wealth of horological and business experience but also a certain freshness to the atelier of Christiaan van der Klaauw. 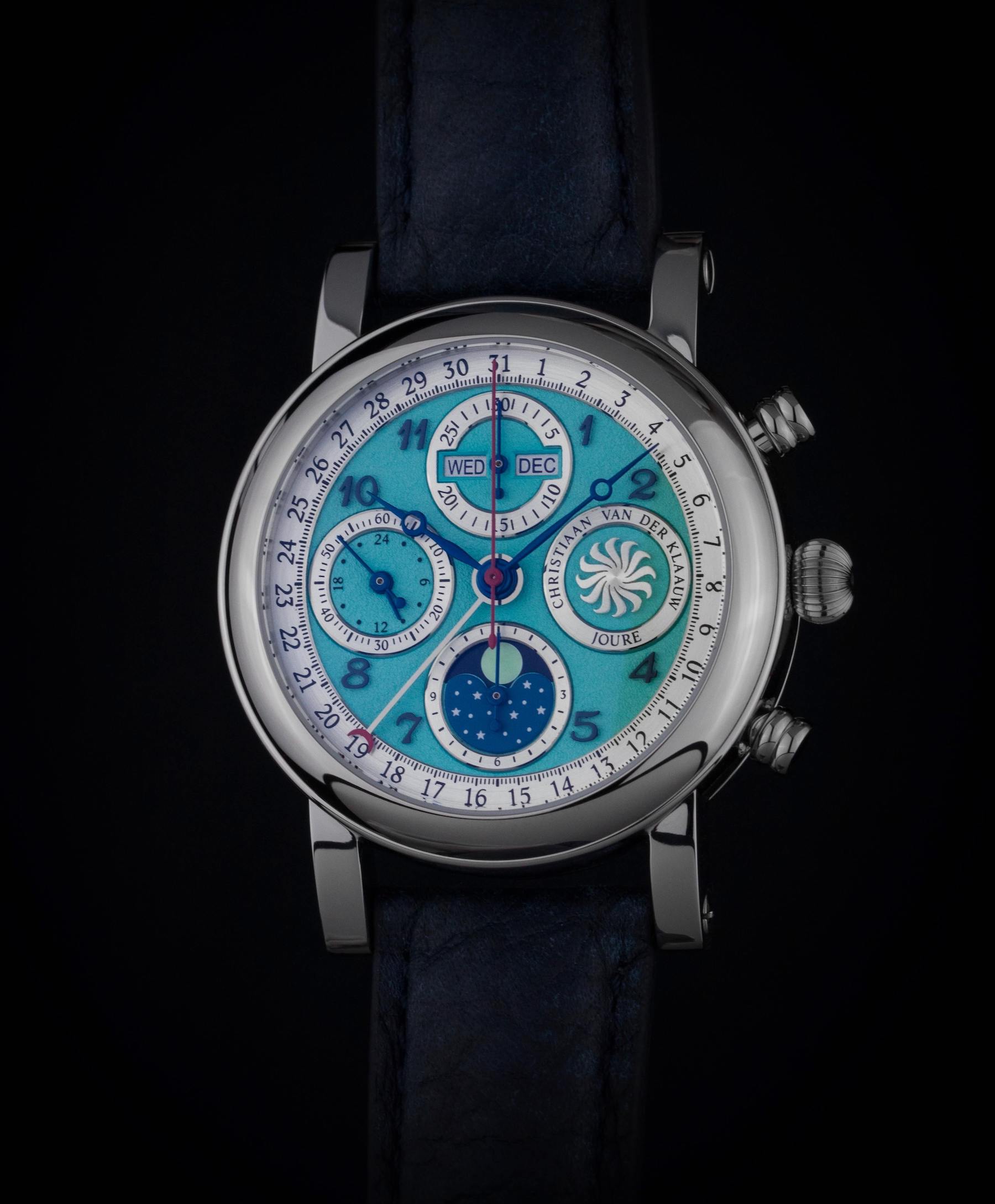 As the inaugural series under Koeslag’s management, the Ariadne Reijersen Collector’s Edition has a lot to live up to. It is also a show of confidence from the Dutch retailer to support Koeslag in his new venture. Jeweler Adriaan Reijersen has worked with Koeslag several times in the past to design special watch editions for his clientele. For his jewelry store Reijersen Juweliers in Oudewater, rare limited editions and exclusive collaborations are part of the creative appeal.

Another attraction of the store is its concept of “a jeweller-gastronome, a jeweller for gourmets.” The idea is to create an intimate and relaxed atmosphere to showcase unique jewelry and watches while building deeper connections with the guests through “culinary indulgences and hospitality.” And the launch of the Ariadne Reijersen Collector’s Edition would just have been the perfect fit for this concept of the store. 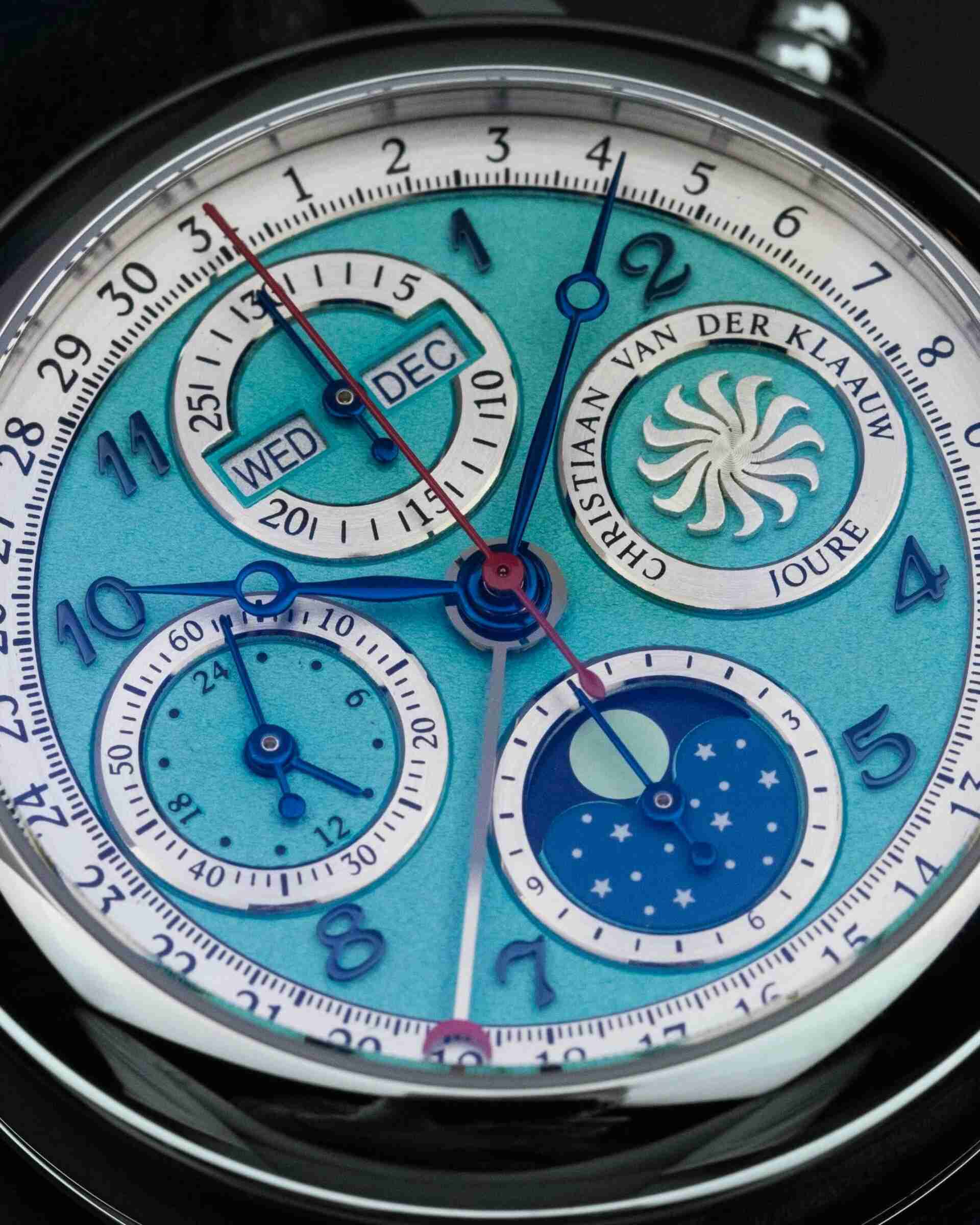 The refresh of Ariadne

The watch itself is an updated version of the classic Ariadne model. While technically the same and stylistically similar, the Collector’s Edition has a much stronger emphasis on contrast when it comes to decoration, surface treatments, and colors. Gone is the CVDK signature guilloché dial, and in comes a frosted dial in either turquoise or salmon pink. The dial features applied indexes and circular-brushed silver rings around the counters to bring a play of depth. 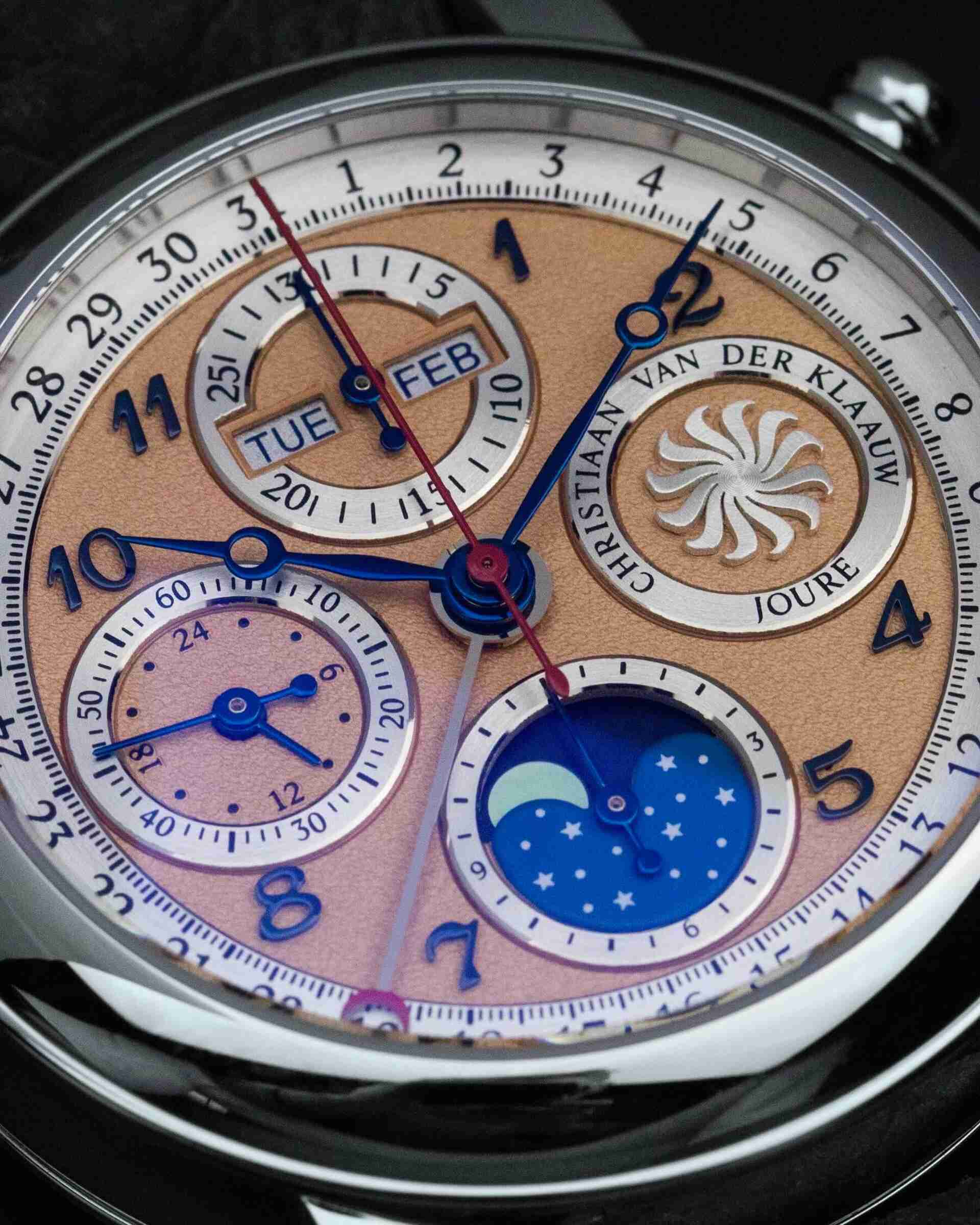 The interplay of complications

The watch presents a complete calendar with a peripheral pointer date, the day and month at 12 o’clock, and a moonphase display at 6 o’clock. Furthermore, a 24-hour indicator shares a home with the small seconds register at 9 o’clock. CVDK’s logo sits on a ring at 3 o’clock with the zonnenklaauw, a sun with 12 claws, in the middle. As an automatic chronograph, the Ariadne displays elapsed seconds, minutes, and hours. The chronograph pushers, signature onion-shaped crown, and straight, elongated lugs protrude elegantly from the fully polished 40mm stainless steel case. The case is sealed off by sapphire crystals on both sides. 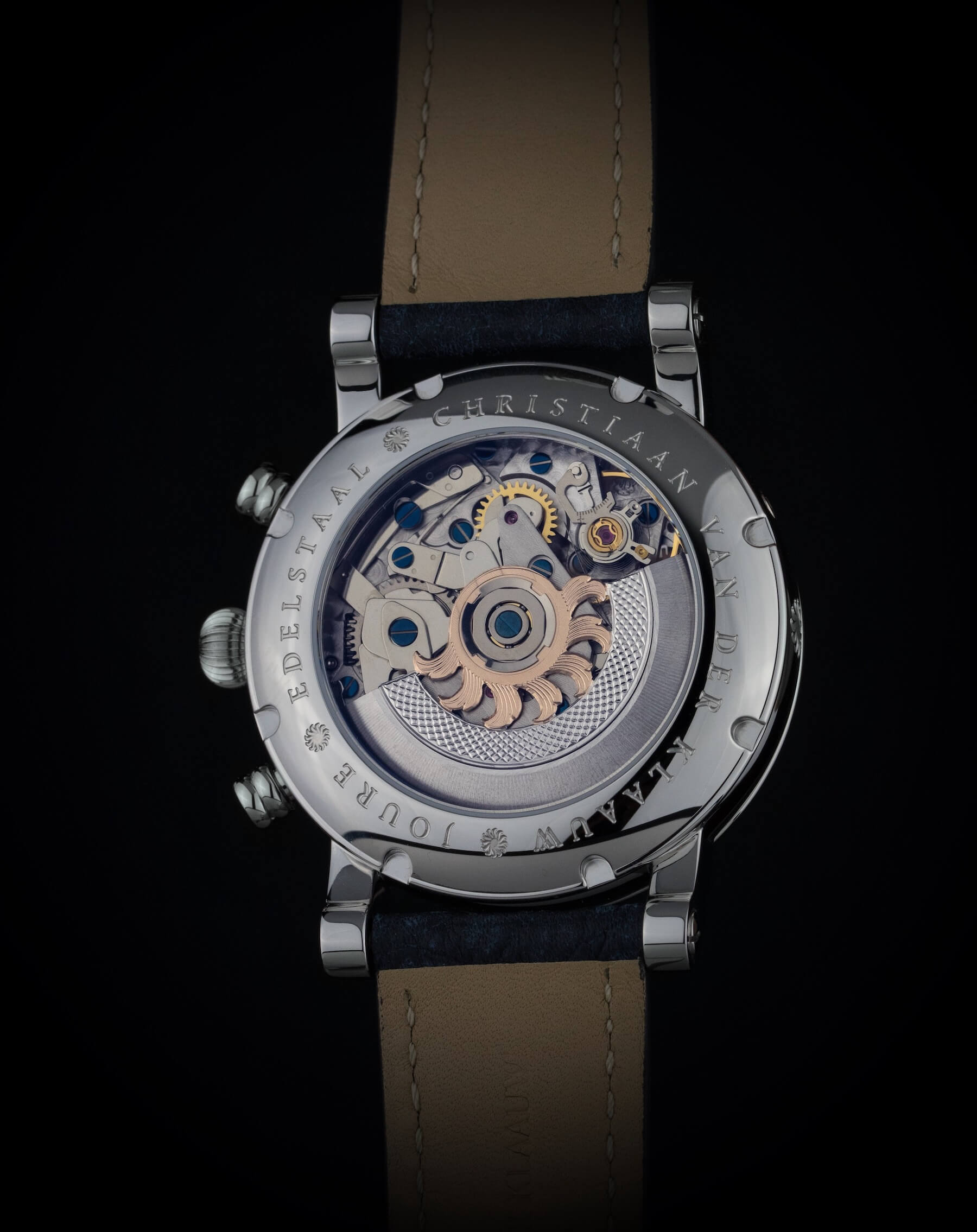 Visible through the exhibition case back of the Ariadne Reijersen Collector’s Edition is the CVDK7758 caliber. This Valjoux-based automatic movement provides a power reserve of 48 hours. Its rotor features a pink-gold-plated sun hand-engraved by esteemed German master engraver Jochen Benzinger as well as a rhodium-plated portion decorated with guilloché.

With added contrast, color, texture, and depth, the refreshed Ariadne watches have a more arresting aesthetic while maintaining their DNA. Both Collector’s Edition models come on a buffalo-leather strap featuring a signature folding clasp with an engraved CVDK logo. The turquoise version comes with a deep blue strap while the salmon-pink version with a brownish-gray one. Regardless of the color iteration, each Ariadne Reijersen Collector’s Edition model is exclusively available at Reijersen Juweliers for €8,950 including VAT.