Did it grow on me or did it disappoint?
Gerard Nijenbrinks
comments 21
Share

I’m a fan of monotonous, boring, and dull watches. That sounds weird, doesn’t it? But please let me explain. A watch that initially doesn’t speak too loudly to me often turns out to keep me interested for a more extended period later on. And the opposite is true as well; a watch that immediately attracts me often becomes boring to me rather quickly. You’ll understand that this makes for a rather delicate situation when it comes to actually buying a watch. Deciding for the Christopher Ward C65 Sandhurst, for instance, wasn’t easy.

Meanwhile, I’ve more or less learned to deal with this kind of situation. Avoiding rushed purchases and many years of watch collecting also helps. Looking at a watch for the first time, I often know what to expect from it later on. Usually, but not always. An excellent way to find out, in that case, is wearing a watch for an extended period and write a long-term review about it. 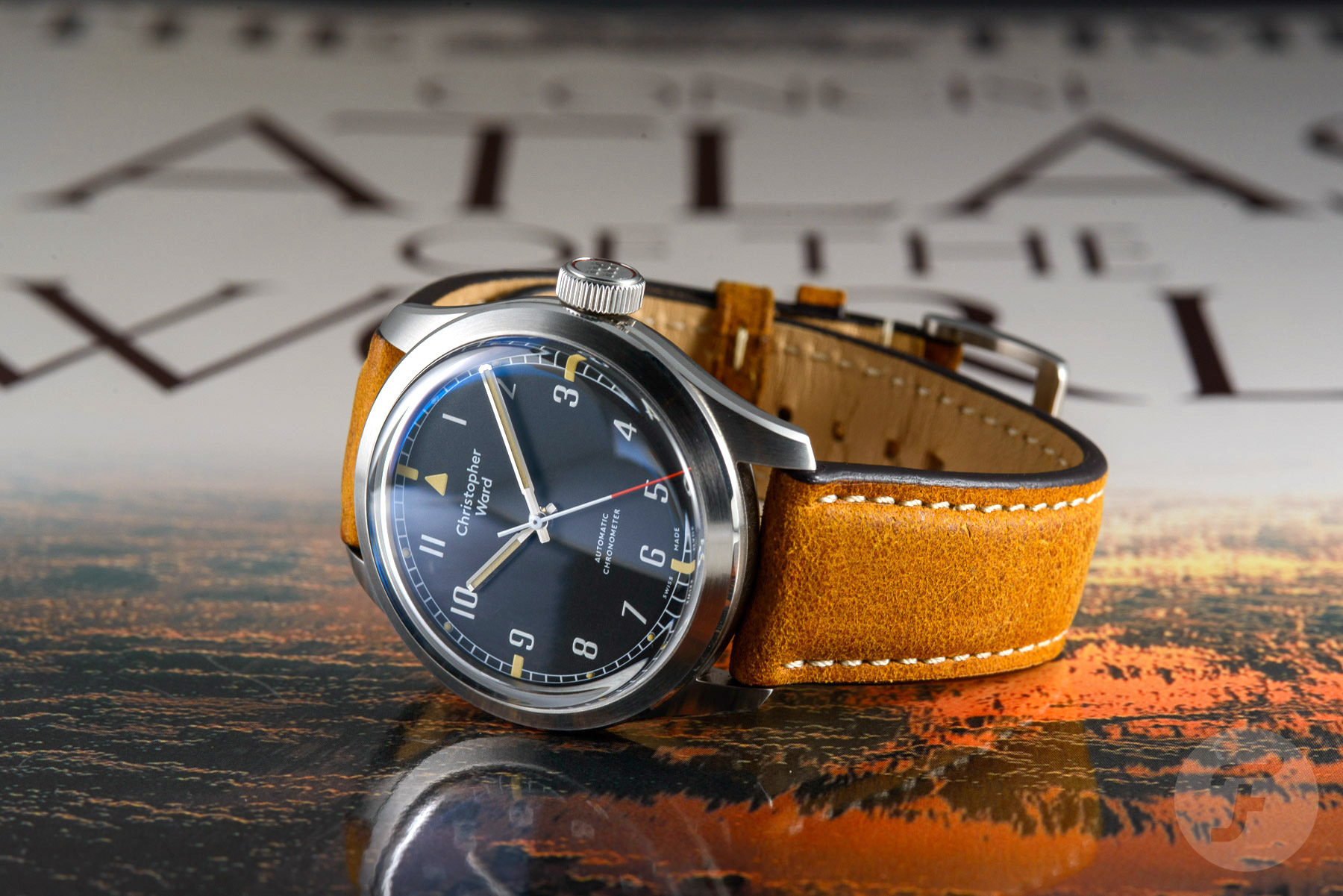 The Christopher Ward C65 Sandhurst is an example of a watch that I couldn’t quite put my finger on right away. The watch’s design gave me the impression that it was a watch that would grow on me. But for something to grow on me — as I have learned in the meantime — it’s not only the design that comes into play. There’s much more to it. Other factors, like the brand’s image, minor details of the watch, and possibly even something as simple as whether it wears comfortably over time or not. Will it become a beloved companion? Or will it quickly fall from grace? Wanting to know, I was delighted that Christopher Ward offered me the possibility to wear the C65 Sandhurst for a more extended period. Tomas already introduced the watch in this article. Now, I had the opportunity to put it to the test. 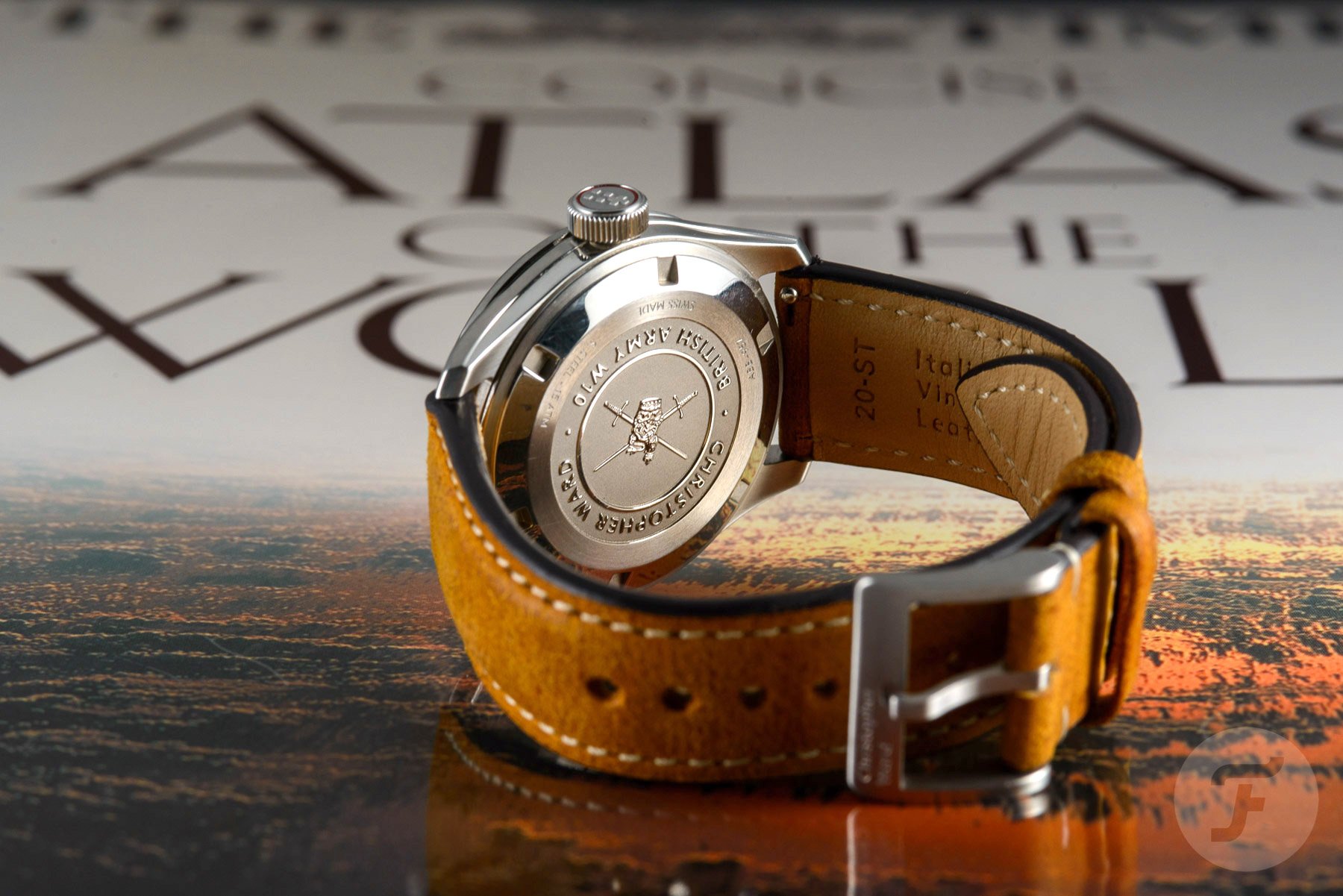 My last review on a Christopher Ward watch didn’t result in me buying the watch. In the end, the very present blue color of the dial, the odd positioning of the brand’s name, and the strap quality ultimately made me pass on purchasing it. Mind you; they were all very personal observations. Technically — other than for the strap — there was absolutely nothing wrong with the watch. For somebody else, who likes everything about the watch (there’s no accounting for taste), buying it could make perfect sense. With the C65 Sandhurst addressing a number of my issues with the Trident, I expect a more positive outcome. 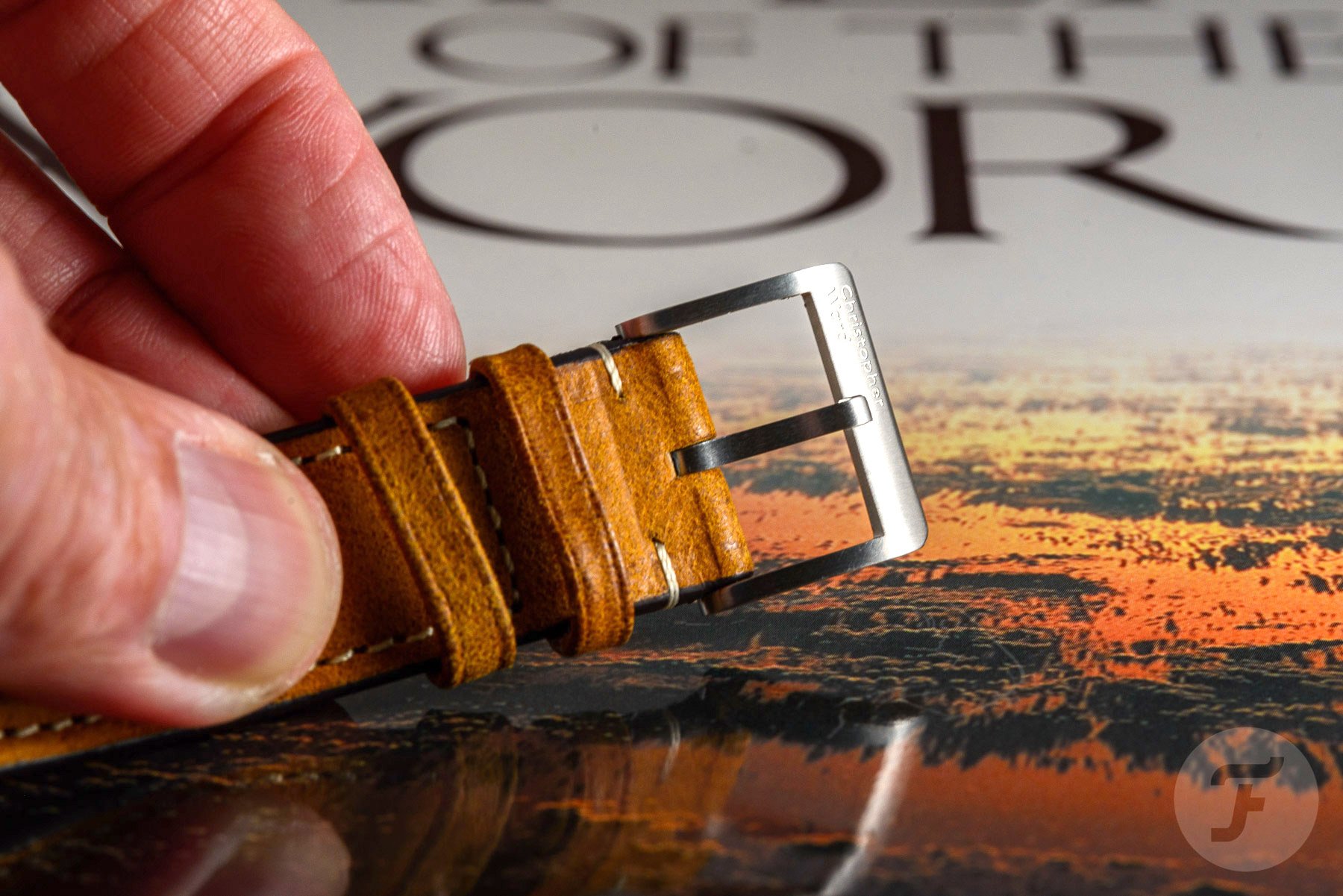 Generally speaking, the Christopher Ward C65 Sandhurst is a modest watch. At first sight, there’s not much that actively stands out. You might say it’s discreet, and that it’s easy to read. If you look closer, it quickly becomes clear that it’s also a rugged watch. The boxed sapphire crystal, 150 meters of water resistance, and a solid case back certainly make it feel that way.  It’s the first Christopher Ward watch good enough to be authorized to carry the heraldic badge of the British Army on its case back. That alone says enough about the watch’s quality. To avoid another disappointment with the Camel Vintage Oak Leather strap, which seems to be the same strap as the one in my review of the Trident, I asked Christoper Ward to fit the Sandhurst with a Camel Canvas Webbing strap. 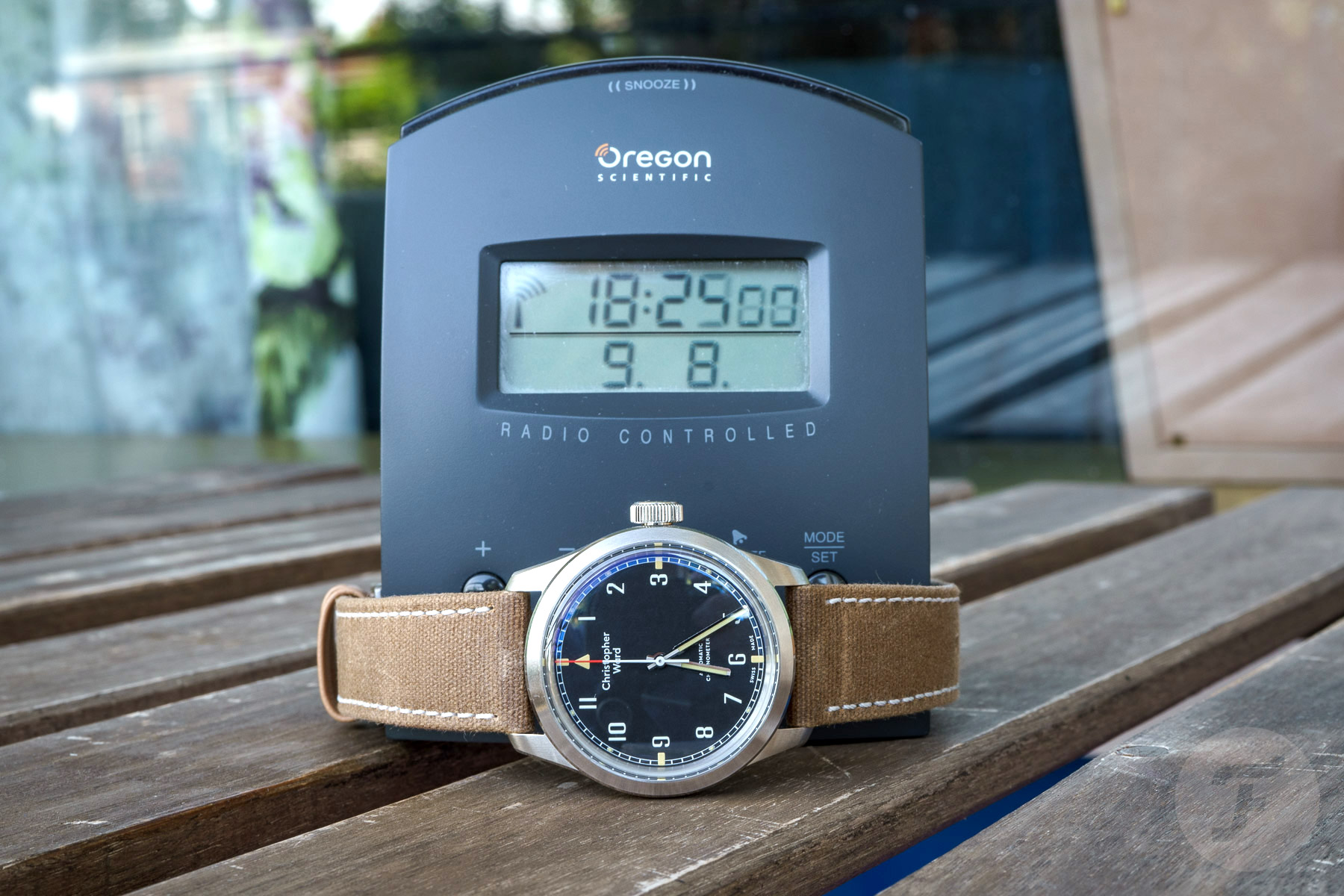 I started wearing the watch on August 9th, 2021 (which is 9.8. in Europe, not 8.9.), one day before the start of my summer holidays. For real-life timing purposes, I synchronized the watch at 18:25:00 with my radio-controlled alarm clock. I liked the look of the Christopher Ward C65 Sandhurst from day one. The Camel Canvas Webbing strap needed a bit of time to break in though. The ends which sit between the lugs are relatively stiff. This gave the watch a tendency to rotate to one side (rather uncomfortably) of my 17.5 cm wrist. I guessed that would become better over time, so with the Sandhurst on my wrist, it was off to France the very next day.

As is often the case in France, the further South we got, the higher the temperatures; the higher the temperatures, the more people start to perspire. And then… My changing of the Camel Vintage Oak Leather strap — which I had perspiration troubles with on the Trident — for a Camel Canvas Webbing strap turned out not to be a solution. Slowly but surely, after a few days of normal wear, dark spots started to appear on the outside of the strap.

Unfortunately, I didn’t bring another strap, so I was stuck with this one during my holiday. Luckily, Christopher Ward also included the infamous Camel Vintage Oak Leather strap with the shipment, so I would change to that one once back home. Due to the fact that this is the second CW strap I have problems with, people might try and blame me for causing this issue myself. But I’ve been using leather straps on my watches for over 30 years at this point, and have never had a problem like this before.

What about the watch?

So far I’ve told you about the strap, but let’s talk about the important stuff: the watch itself. As it turns out, it actually proved to be a charming companion. Readability is excellent in any light conditions, the size suits me well, and I like that the watch doesn’t seem to attract much attention.

I like some of the more subtle details of the watch, like the little red ring in the screw-down crown and the beautifully embossed heraldic badge of the British Army on the case back. I even like the cream lume in the hands and on the indexes; it suits this watch without feeling gimmicky. If everything had been white/white, it would have lost a lot of its character. 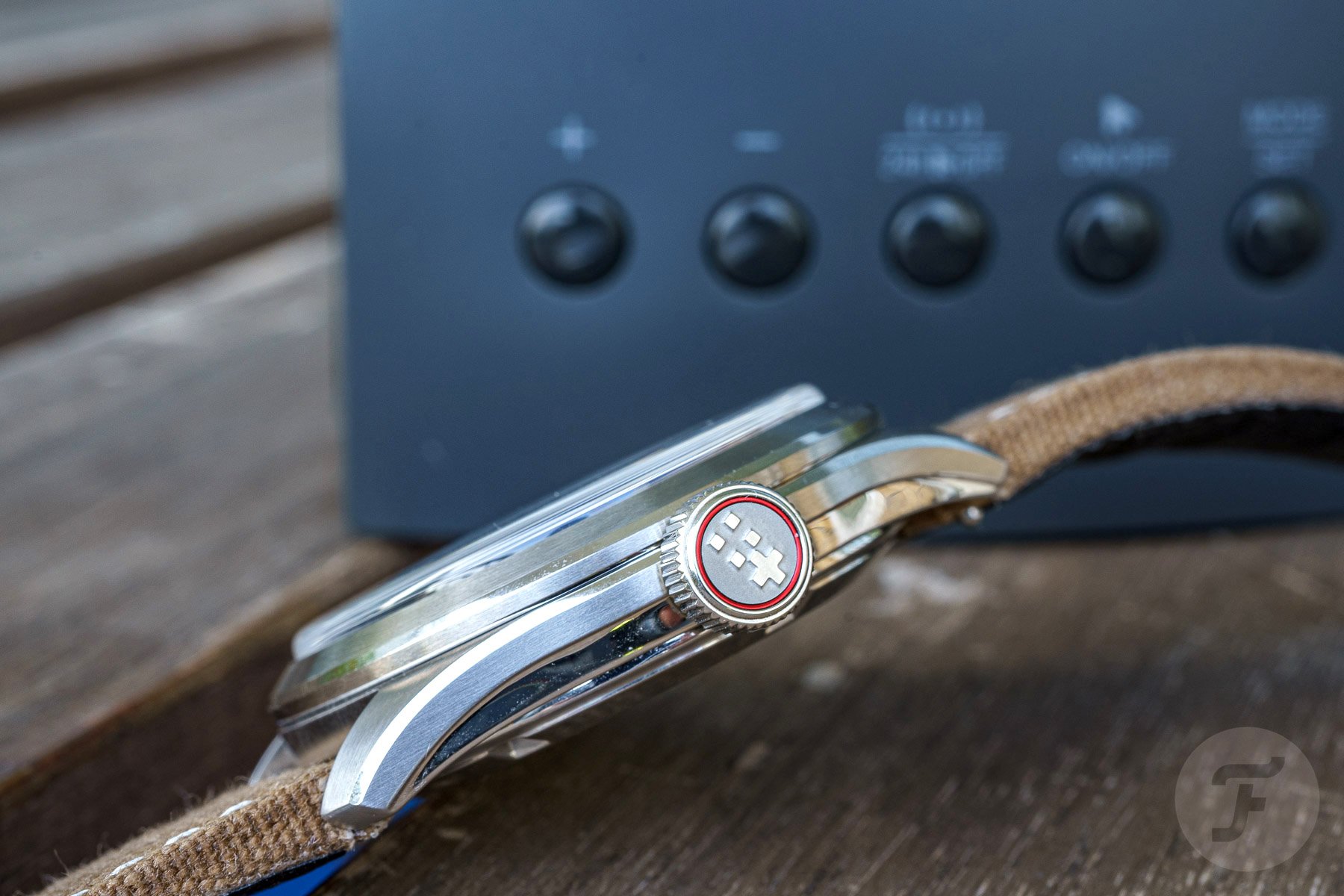 One of the fine details of the Christopher Ward C65 Sandhurst is a little red ring in the crown. Not something very present, but it calls your attention to the level of detail from time to time. Just like the beautifully embossed case back does whenever you take the watch off. 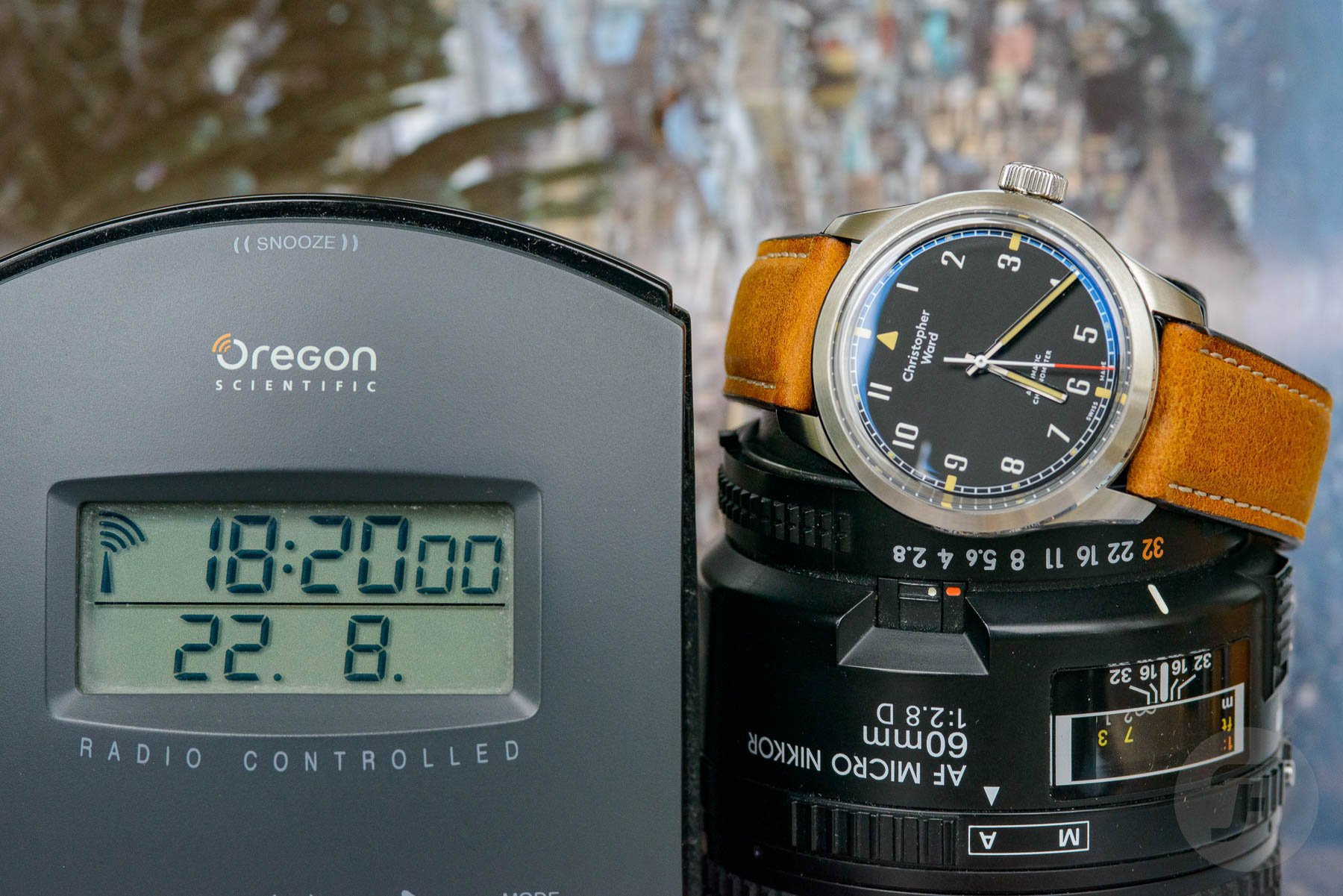 Back in moderate temperatures

Back home from France, I fitted the Camel Vintage Oak Leather strap as planned. And, to be honest, I think the watch looks even better on it than on the canvas option. There was also no precipitation or high temperatures to ruin the strap. Would this then be a better option? Well, as long as you can avoid getting it wet in any way, I think you’ll be better off with the leather strap. 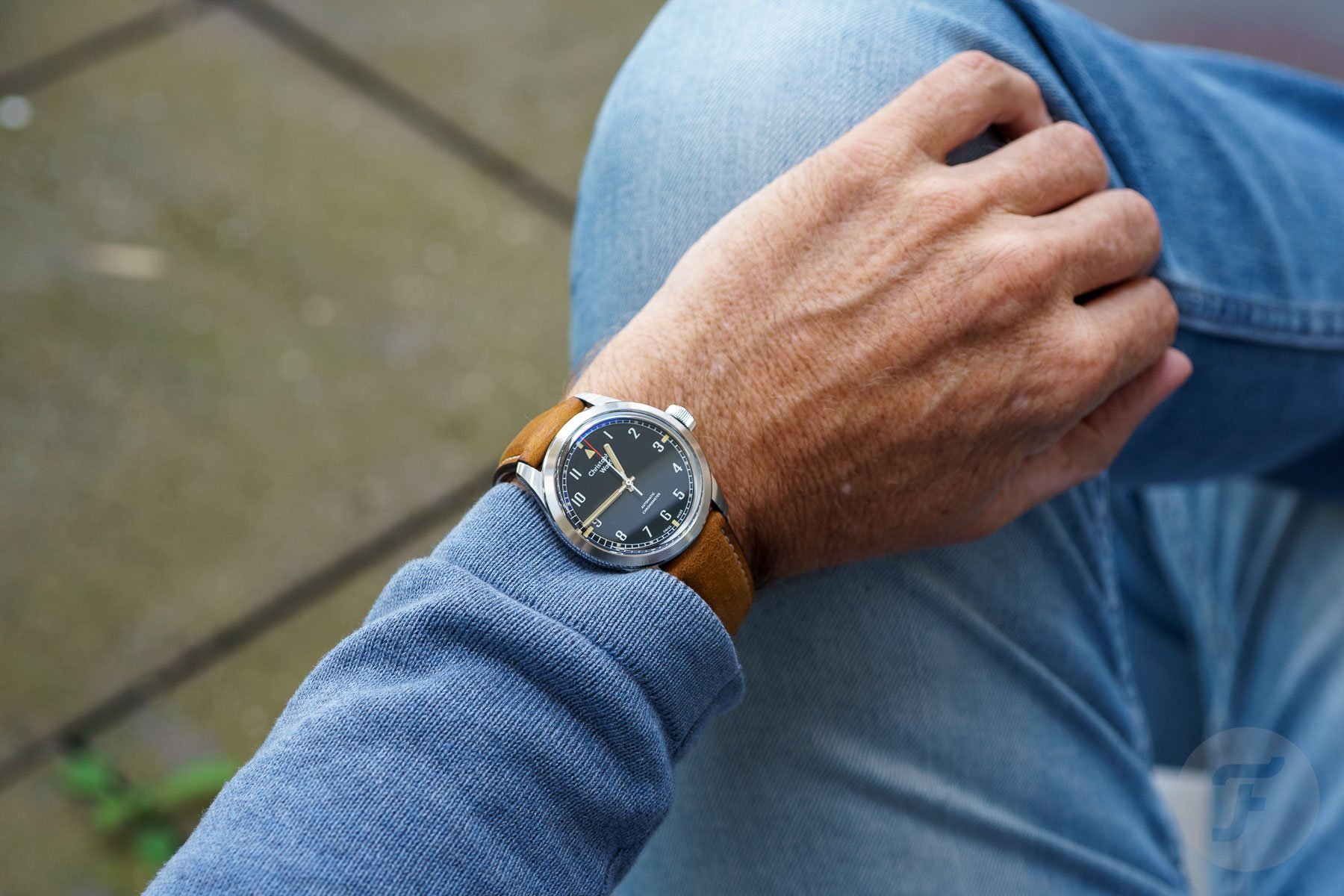 My long-term review draws to a close, but first, I had to check the accuracy against my radio-controlled alarm clock. I had the watch on my wrist for nearly two weeks, 13 days to be precise. That should be enough to show how the chronometer-certified Sellita SW200 automatic movement had performed under various conditions. I performed the measurement on August 22nd, 2021, at 18:20 hours, and at that time, the watch showed 18:20:28. This means the C65 Sandhurst gained 28 seconds in 13 days. An average daily deviation of plus two seconds per day. That’s almost a perfect result and an unbelievable performance!

The Christopher Ward C65 Sandhurst is a steal

I didn’t talk about the price of the watch yet, but I think at this point, it’s time to do so. The Christopher Ward C65 Sandhurst retails for € 1,050, including European VAT. For such a detailed and nicely finished watch with respectful technical specs and this accuracy, I’d say it’s a steal. The packaging surprised me as well. It suits the quality of the watch, but to be honest I didn’t expect such fine quality at this price point. Plus, it seems to be ecologically responsible. 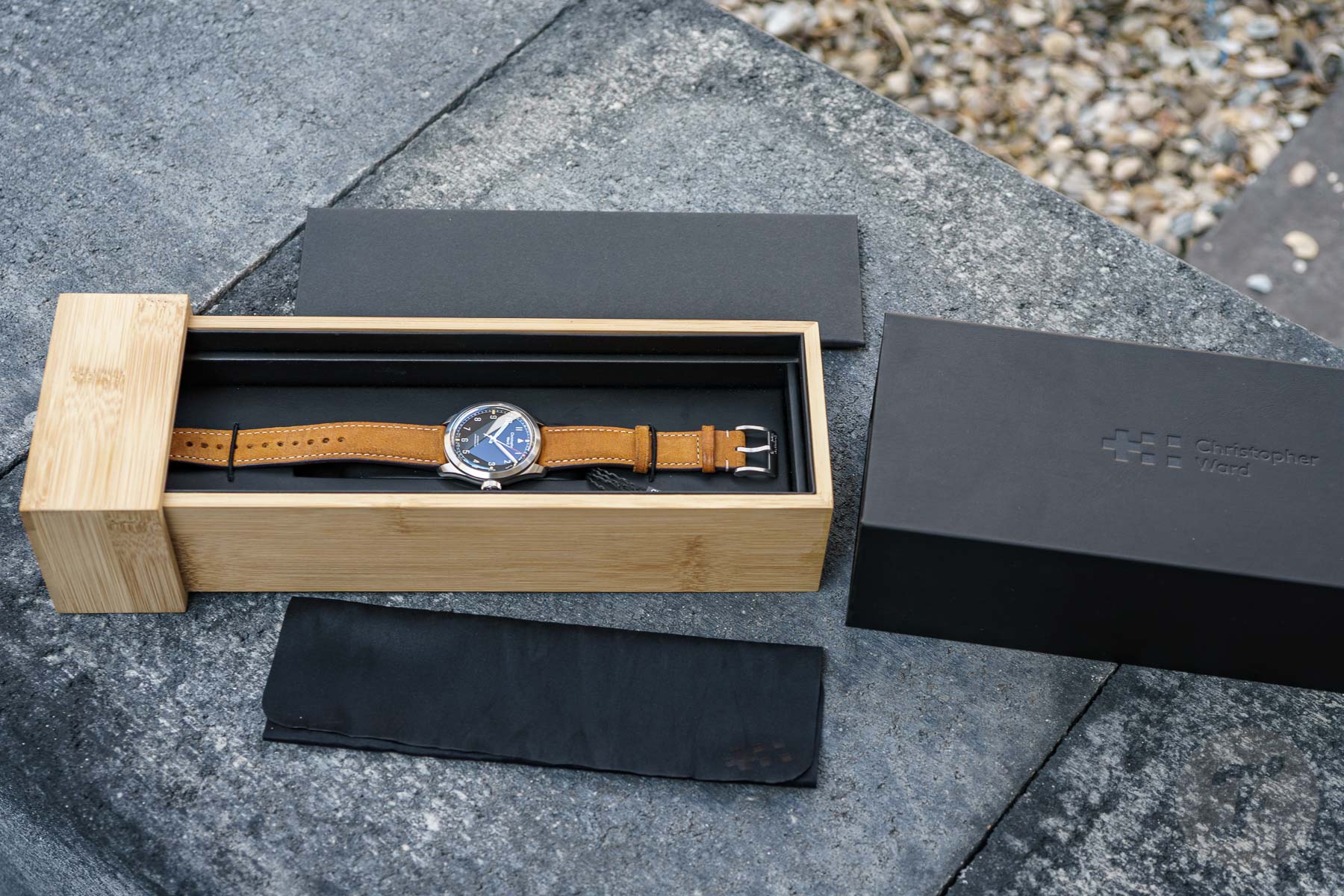 Did I like the Sandhurst more than I liked the Trident a few years ago? Yes, I definitely did. Mind you, the Trident is a fine watch, but in the long term, there were some details that did start to bug me a little bit. With the Sandhurst that’s definitely not the case. After a few weeks of wearing the C65 Sandhurst soon became a trusty companion. I won’t say it grew on me, as my feeling about the watch pretty much remained the same as it was when I saw it for the first time. But it definitely didn’t disappoint either.

For more in-depth information on the Christopher Ward brand and the C65 Sandhurst specifically, head over to the brand’s website here.