The Chronoswiss Régulateur model that I have for over 15 years, is reference CH1223. There was only one different reference before this one, which was a hand-wound watch (reference CH6322). The first Chronoswiss Régulateur was created by Gerd R. Lang (founder of Chronoswiss) in 1987, and had this Unitas based movement, turned into a regulator watch. Hour, minute and seconds did not interfere with each other, for perfect time reading. A few years later, early 1990s, Chronoswiss decided to use an automatic movement inside their Régulateur watch. Gerd R Lang sourced a number of Enicar caliber 165 movements and reworked them. This movement became Chronoswiss caliber 122. 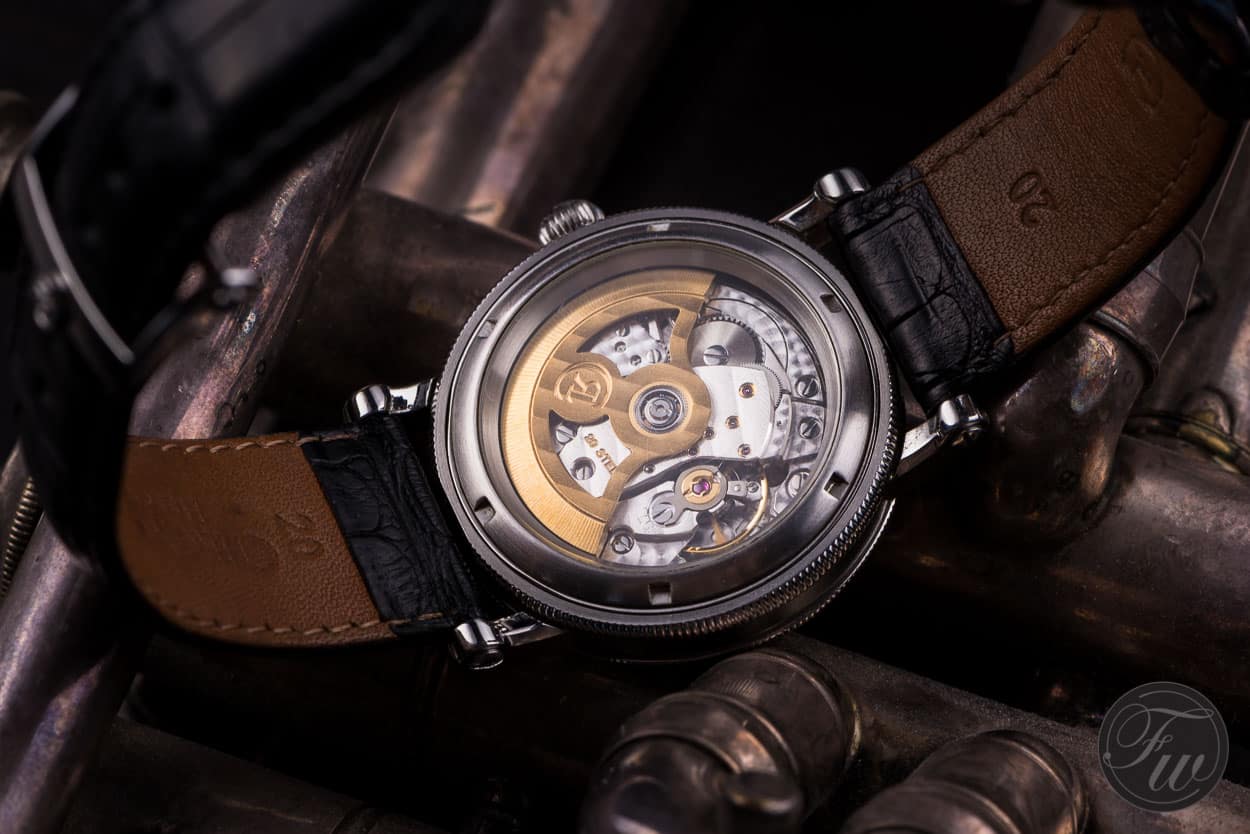 Road To The Flying Regulator

The reference CH1223 I have is a great watch. It is 38mm and wears nicely on the wrist. It has these typical Chronoswiss features, like a knurled bezel, onion crown, silvered dial and blued hands. At the time, many Chronoswiss looked similar, like the skeletonized Opus, Lunar Chronograph, Lunar Triple Date and so on. Chronoswiss was never a really well-known and big brand, but I doubt that this would be the intention by Gerd R Lang. The large and luminous Timemaster model did change that a bit, as it put Chronoswiss on a bigger horological map.

You can read it as ‘serious regulator’, but I don’t think it was intended that way. The Régulateur and Regulator watches never left the collection and have been available in many variations in the meanwhile, including models with a tourbillon movement and enamel dials. I’ve been following Chronoswiss as good as I can, and the Regulator always remained to be my favorite watch from them. I do have to admit I hardly wear mine anymore, but I do cherish it. I should wear it more often, but these days there are hardly many formal occasions I need a dress watch for.

Without further ado, let’s have a look at the Chronoswiss Flying Regulator. 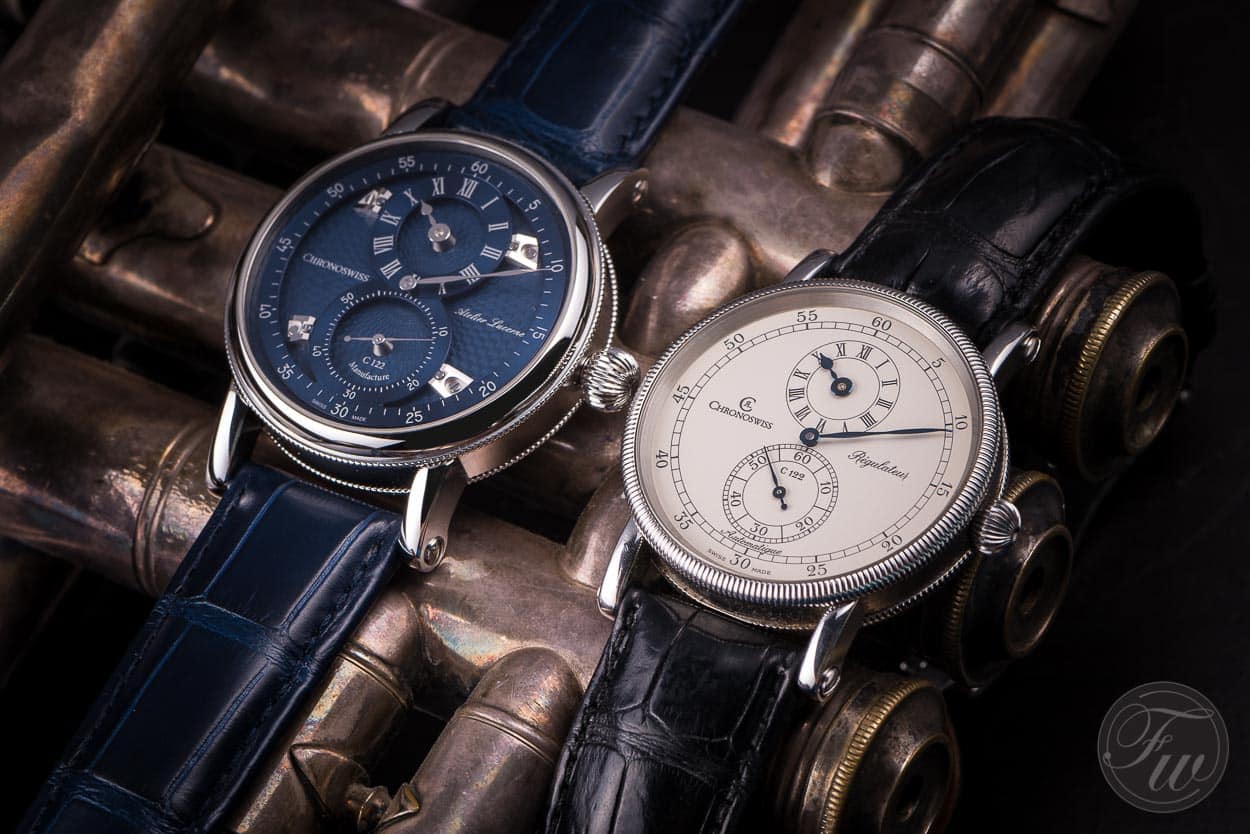 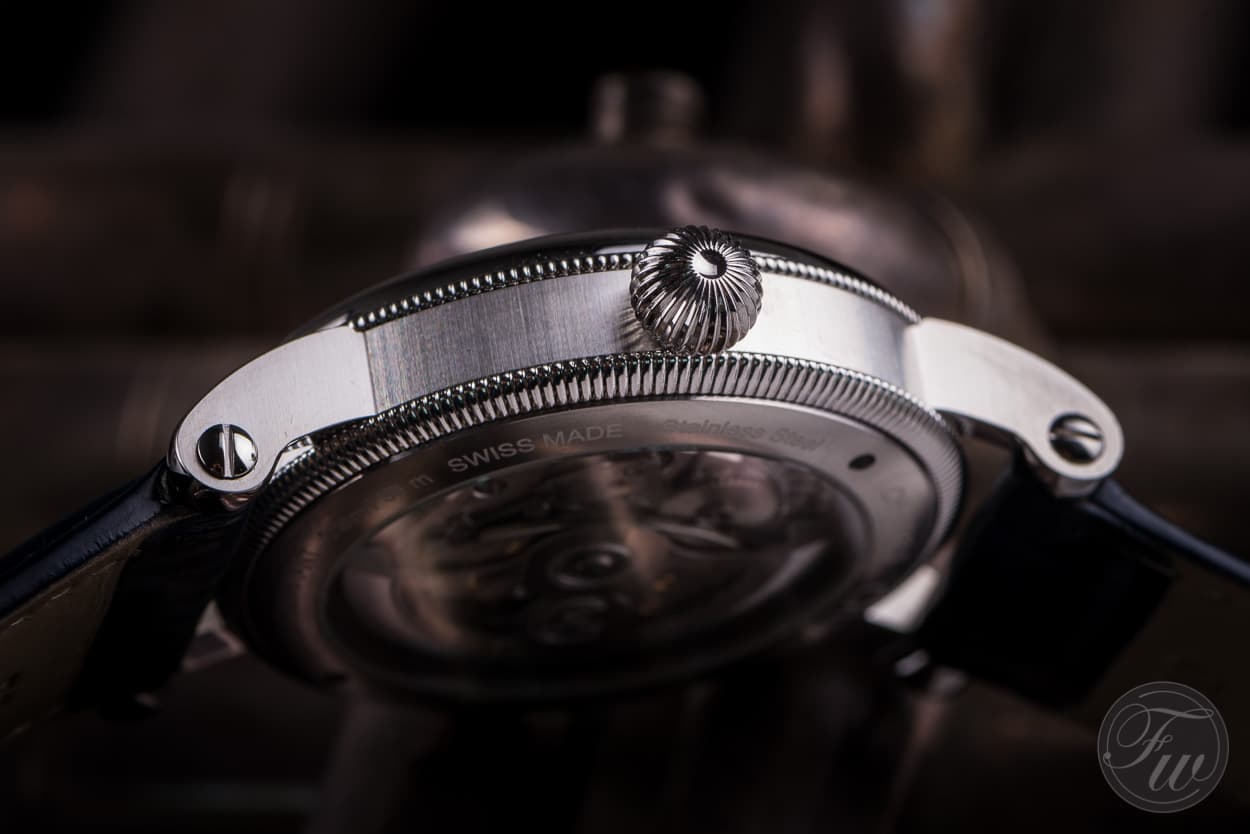 I am a bit of a watch purist. I like clean and pure designs, that’s why I am a fan of watches that keep it as close to the ‘original’ as possible (AP Royal Oak 15202, PP Nautilus 5711, Speedmaster Pro 311.30.42.30.01.005, IWC’s Ingenieur 3239 and so on). This Chronoswiss Flying Regulator is clearly not, with its layered and relatively busy dial. But I love it. The dial of the Chronoswiss Fyling Regulator has bridges that carry the sub dials, like rings that are floating. The large minute scale and the smaller hour and seconds scales and the lower main dial with guilloche finish are giving a nice 3D effect. The bridges are nicely done, using two screws each. All three hands have ‘pipes’ that are quite large, but correspond nicely with the bridges. What didn’t change, is the printing on the dial regarding the scales and the wording. 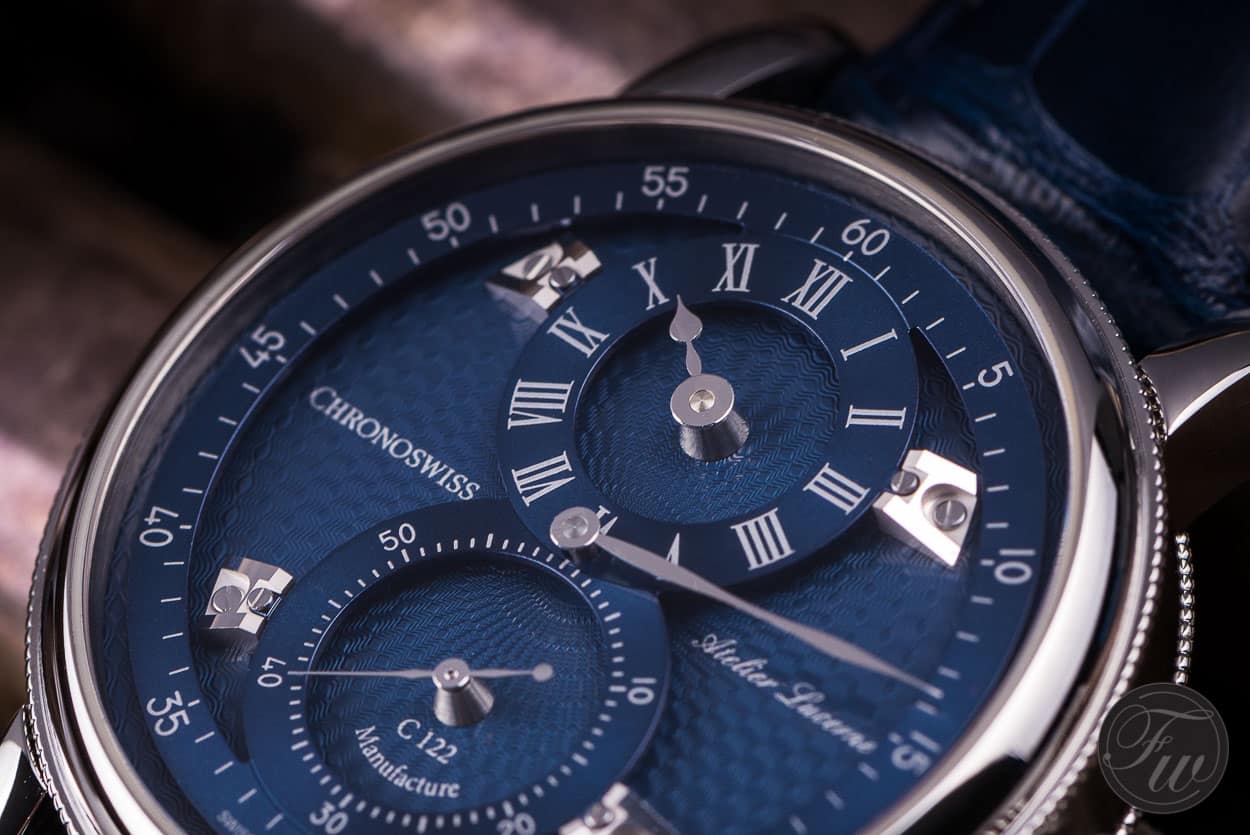 Somehow, the Chronoswiss Flying Regulator is a watch that kept back coming onto my wrist. Even though I still consider it to be a dress watch, the dial is just so playful yet stylish and sophisticated, that it needs to be worn. If you are not used to reading time from a regulator dial, it will take you a couple of times to be able to do it very quickly, but you will get easily used to it. The hands have this nice Poire Stuart shape, like the original CH1223, and are rhodinized. The minute hand is slightly bent by hand (you might have to read that sentence twice). 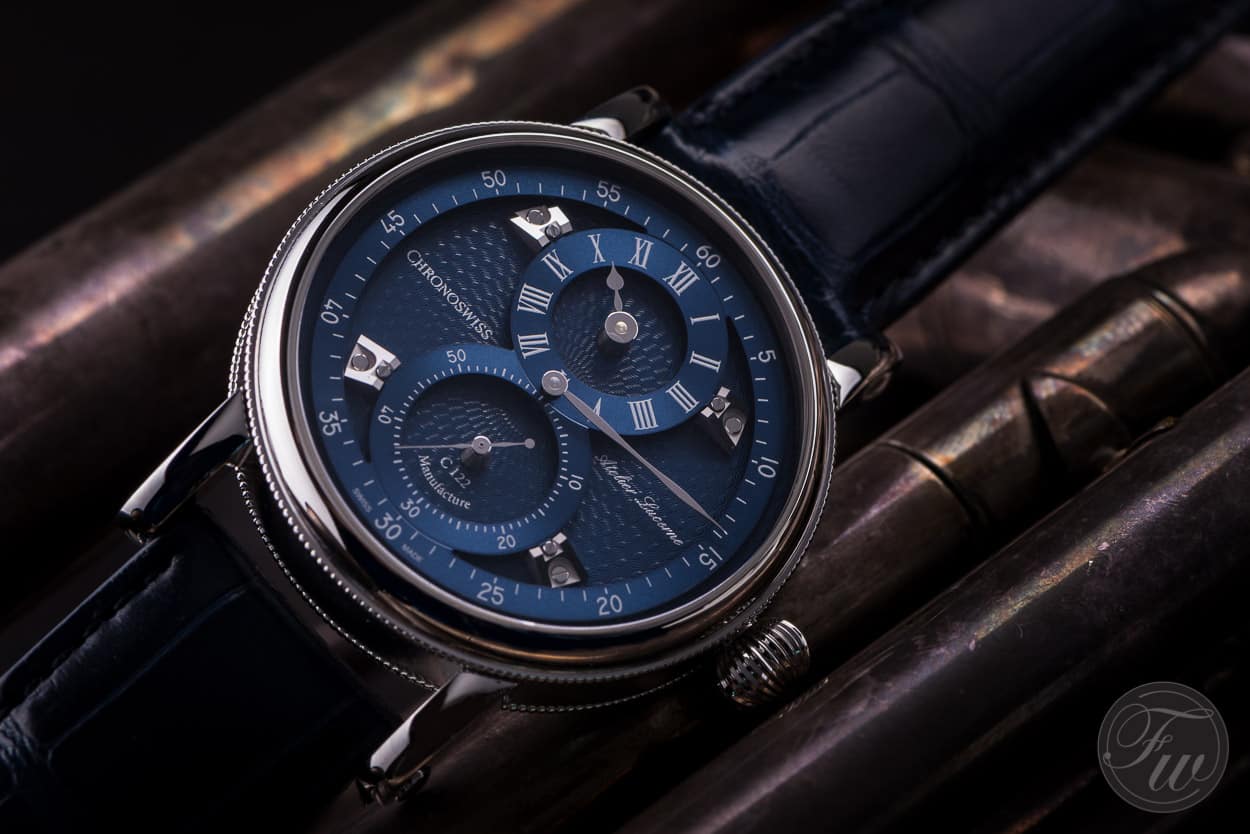 To be honest, I didn’t even know that the Regulator classic had a different movement than the caliber 122. However, the Régulateur Manufacture (they also call it the Regulator Manufacture, so I guess some updating needs to be done internally) and this Flying Regulator both have the caliber 122 movement inside. It is a great movement, I can tell from my +15 years experience with one, that it performs well and is nice on the eyes as well. This watch deserves a display back.

The movement has a nice perlage finish as well as some Côte de Genève. My old Régulateur (I keep writing it that way, as it is on the dial) has a gold colored (gilt) rotor, the one on the current caliber 122 seems to be rhodinized as well. The new caliber also has one jewel more (30 in total) than mine. The jewels are set in chatons, which you don’t come across very often these days.

The movement in my personal watch is based on the Enicar 165, Gerd R Lang did a reconstruction so it displays the hours, minutes and seconds differently. If I am not mistaken, the original Enicar caliber 165 had a centralized seconds hands (and minutes and hours for that matter). The current caliber 122 is still based on this movement. The movement has been heavily modified for its regulator set-up, and Chronoswiss is the only company who uses the Enicar 165 as a base movement today, that’s why they refer to it as ‘manufacture’.

Perhaps you find me overly enthusiastic about this watch and a bit forgiving on some points, but I find it a refreshing edition of a classic to be honest. Something a lot of brands are failing to establish some times. Chronoswiss took the classic Regulator (or Régulateur) as a starting point and decided to make it come more alive then some of the other models.

Making it ‘3D’, having a guilloché dial and using the original caliber 122 makes it a perfect tribute to their own classic. Perhaps they don’t see the Regulator as a backbone of their collections, but honestly, I do. The Régulateur was the first Chronoswiss (established in 1983) with that typical look, and they respect it with this new Regulator edition. 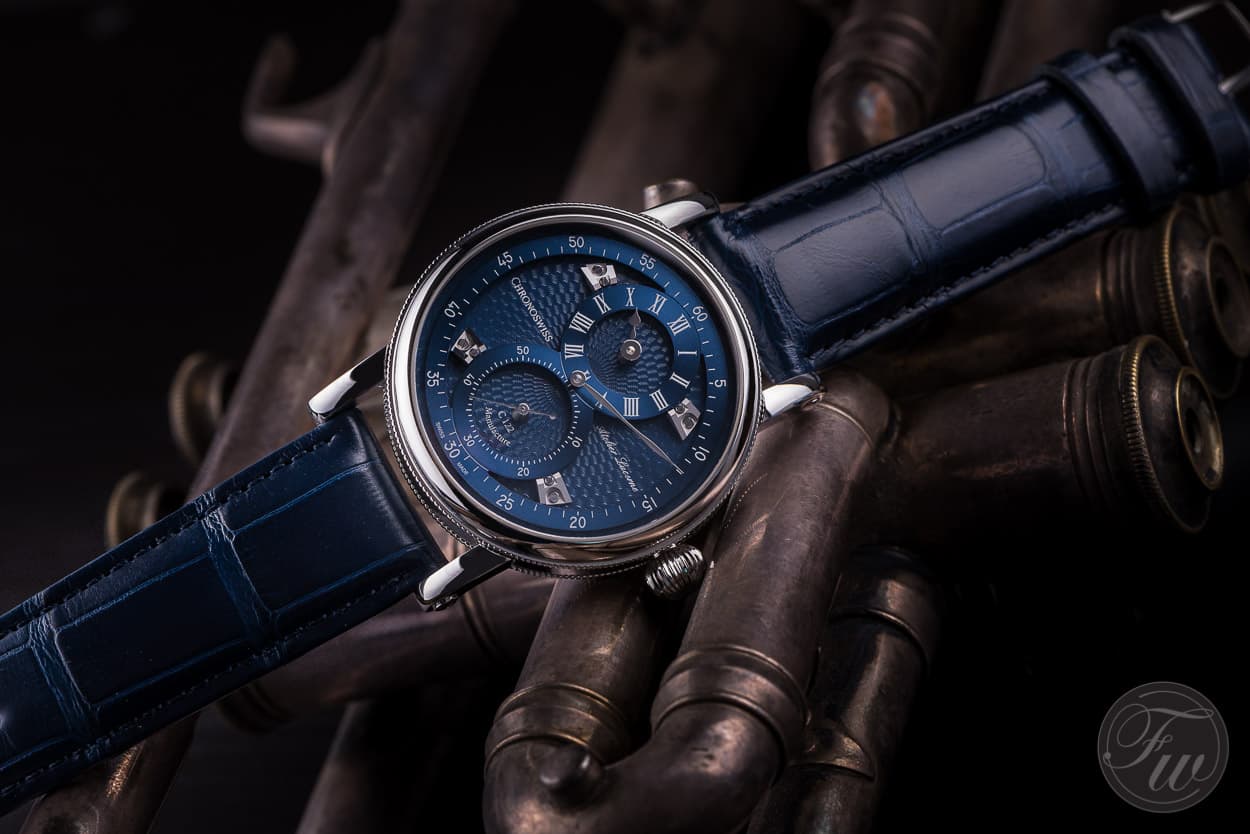 This watch could be a daily companion, especially for those who don’t care for a date and want something more unusual. Perhaps something different from the Rolex, Omega, IWC, Cartier, Breitling (fill in the rest of the top 10 brands) watches out there. Nothing wrong with those, but the refined Chronoswiss Flying Regulator is something different. Perhaps more sophisticated a well. It is a handsome watch that gave us quite a bit of positive comments from (watch) people.

More information via Chronoswiss online. A couple more images below in the gallery.