If it's color you're seeking, you've come to the right place
Lex Stolk
comments 8
Share

The Kodachrome Coffee Corner Watch Talk is all about “nice bright colors” — hardly a surprise with that name. Could I ask you to close your eyes and try to envision the colors Jura Green, New Forest Yellow, Acer Red, and Lucerne Blue? What did you capture on your imaginary color film? Four different versions of the Christopher Ward C63 Sealander? The new limited-edition 36mm watches may not be very original, but if the colors are done right and hit a spot, they’ve fulfilled their mission. Seeing the Christopher Ward models made me want to wear the dark yellow Citizen NJ0150. And in the search for more color, I stumbled upon a very exclusive and artistic Jaeger-LeCoultre Reverso.

The four funky colors that Christopher Ward picked for the limited-edition 36mm C63 Sealander are all the rage. A certain shade of blue that is often connected to a certain American jeweler seems to be very provocative and creates frantic responses. We’ve seen the stir that the Rolex Oyster Perpetual and in that particular shade of blue caused. And in the wake of the blue version, the red, yellow, and green variants of the “OP” became hyped as well. And by now, we’ve also seen brightly colored versions of the Omega Seamaster Aqua Terra 150M 38mm come to life to fulfill the need for something vivid on the wrist. 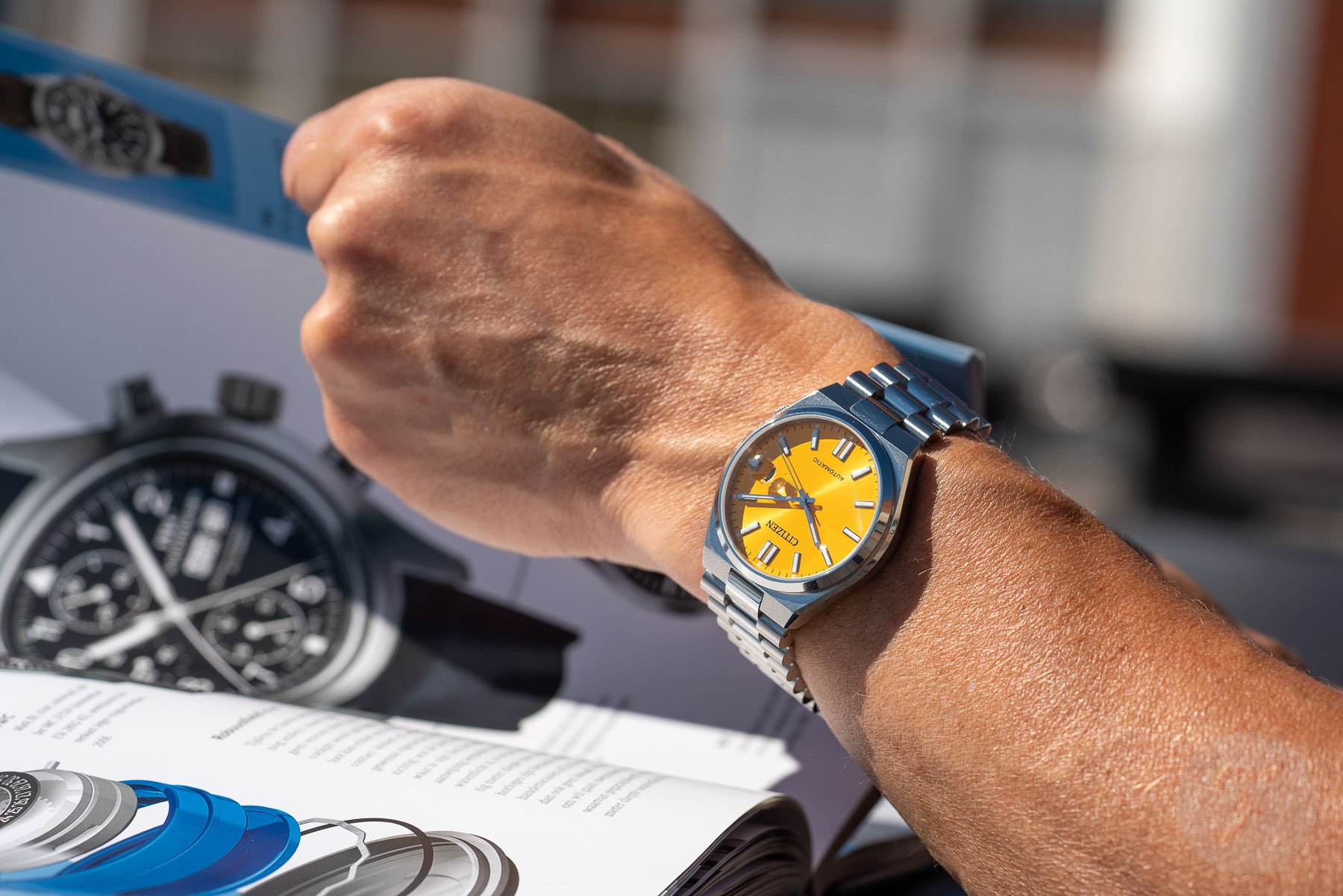 Colors usually come at a cost, but luckily, there’s also the new Citizen NJ0150 that delivers a look that’s familiar and somehow similar to that of the Rolex and the Omega. Don’t get me wrong. I do like a colorful dial. However, I’m also aware that a striking color that at first captivates can, over time, become a bit of an eyesore. You can grow tired of a color statement. Black and white are way more boring shades, but they also don’t get old like plum purple with red accents does.

The shiny sunflower-yellow Citizen NJ0150 on my wrist (which, coincidentally, matches my T-shirt from The Kooples) is a €279 watch. If I grow tired of yellow one day, the financial impact probably won’t be too devastating. But what about the colorful versions of the Christopher Ward C63 Sealander Automatic 36mm Limited Edition? Where do these watches fit in? 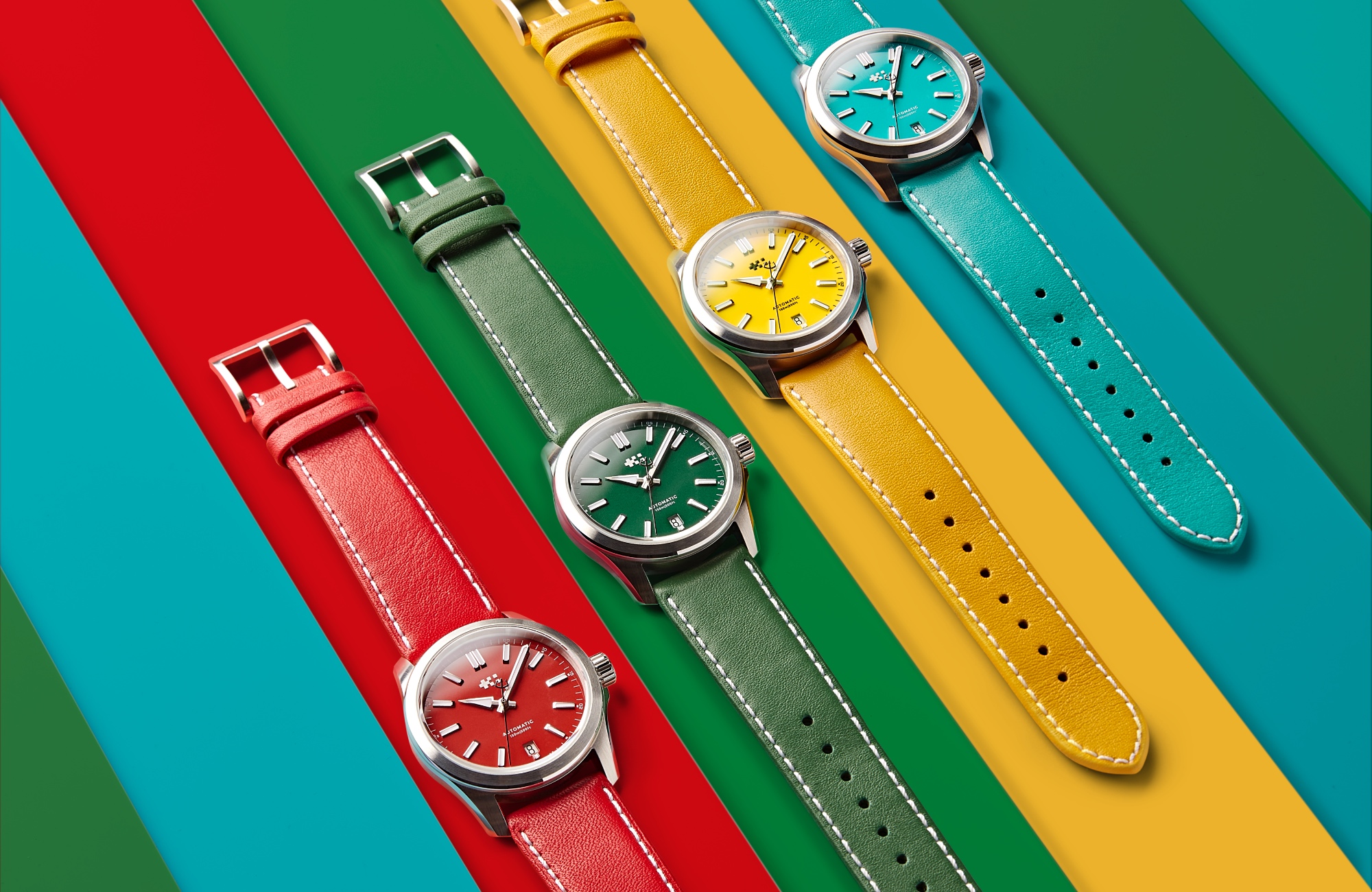 Well, the C63 Sealander is a recent collection that contains all-around watches. The line’s standard go-anywhere, do-anything watches will never look out of place, but they also won’t draw a crowd. The new C63 Sealander Automatic 36mm Limited Edition is smaller but also a more boisterous creation thanks to the different dial colors. Designed in the UK and made in Switzerland, the green dial is not called Surrey Green, but Jura Green instead. There are also variants with New Forest Yellow, Acer Red, and Lucerne Blue dials. And if you’re not thinking “Tiffany Blue” after seeing Lucerne Blue, you haven’t been on any watch website lately. Yes, the dial colors are hardly surprising. However, Christopher Ward found the right color shades, and some brands seem to struggle with that quite a bit.

Inside the 150m water-resistant 36mm steel case beats a fairly standard Sellita SW200-1 movement. Nothing to see here, and that’s why it has a closed case back. On the differently colored dials, you will find baton-style hour markers, a date window at 6 o’clock, and the new Christopher Ward twin-flag logo at 12 o’clock. What do you think of that logo? Is it a logo befitting a luxury watch brand, or is it a design that makes you think of a high-tech computer-chip maker? I can envision the logo on my laptop with the line “Christopher Ward Inside” right underneath. Anyway, the C63 (that is not an AMG version of a Mercedes C-class) costs €840 on a leather strap. And if you want the watch on a familiar-looking, sporty three-link bracelet, the price is €1,014.

You can find more information on the official Christopher Ward website. 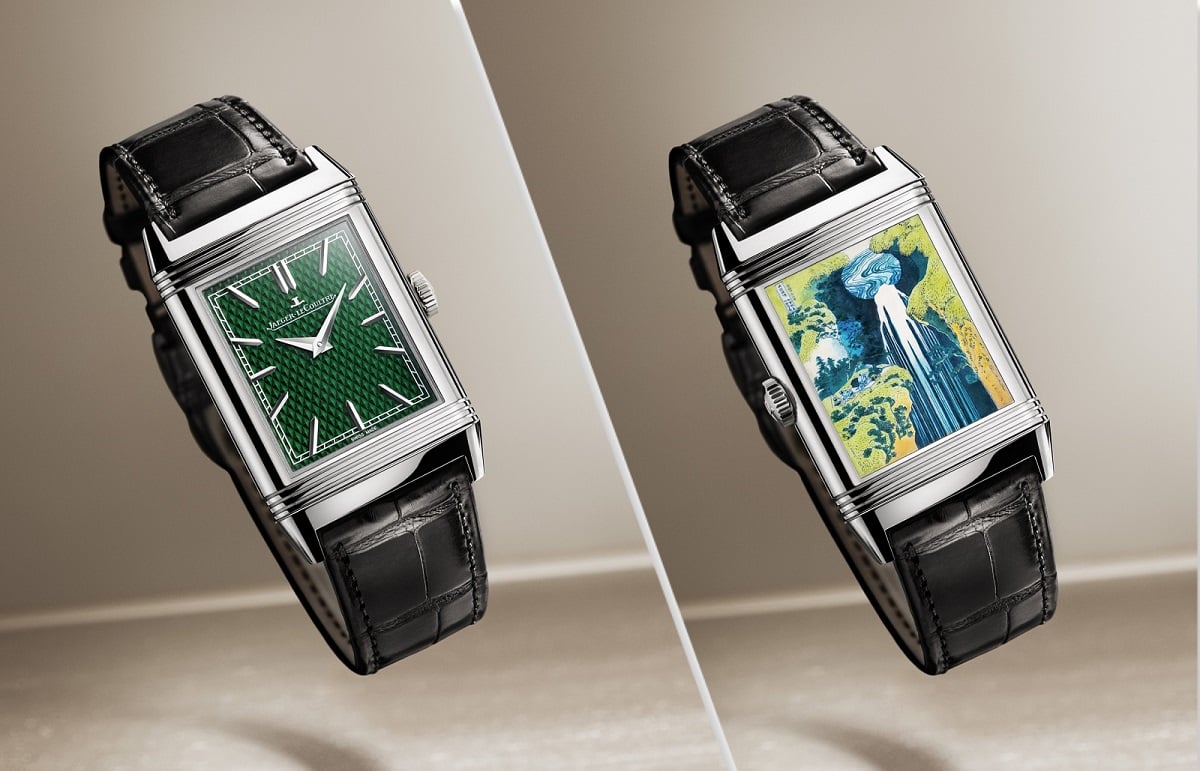 The Jaeger-LeCoultre Reverso Tribute Enamel Hokusai “Amida Falls” is also colorful but completely different in nearly every way. This limited edition of just 10 watches is an homage to one of Japan’s most celebrated 19th-century artists, Katsushika Hokusai. On its case back, this Reverso has an exquisitely detailed Grand Feu enamel reproduction of Hokusai’s woodblock print The Amida Falls in the Far Reaches of the Kisokaidō Road (Kisoji no oku Amida-ga-taki). The time-telling side of this exclusive Reverso is also quite special. The dial of the Reverso displays the Swiss expertise of the manufacture’s Métiers Rares atelier in the craft of guillochage. Having said that, the Japanese artwork on the reverse is also reproduced with the miraculous skills of JLC’s artisans. They are responsible for the miniature painting and the Grand Feu enameling of the artwork.

The hand-enameled miniature reproduction of The Amida Falls in the Far Reaches of the Kisokaidō Road is the best-known work from A Tour of Waterfalls in Various Provinces (Shokoku taki meguri), a series of eight woodblock prints created by Katsushika Hokusai in 1833 and 1834. To reproduce the artwork that was created using the Asian art form of woodblock printing, the enamelers had to develop a special technique. They needed a method that reproduced the unique bokashi effect of the subtly nuanced and graduated colors of the depictions originally printed on paper. At the same time, reproducing Hokusai’s signature vibrant blues and yellow hues was also a must. The JLC craftspeople succeeded, but one miniature picture requires 70 hours of labor spread over several weeks. That includes a total of 12–15 separate firings at 800°C. 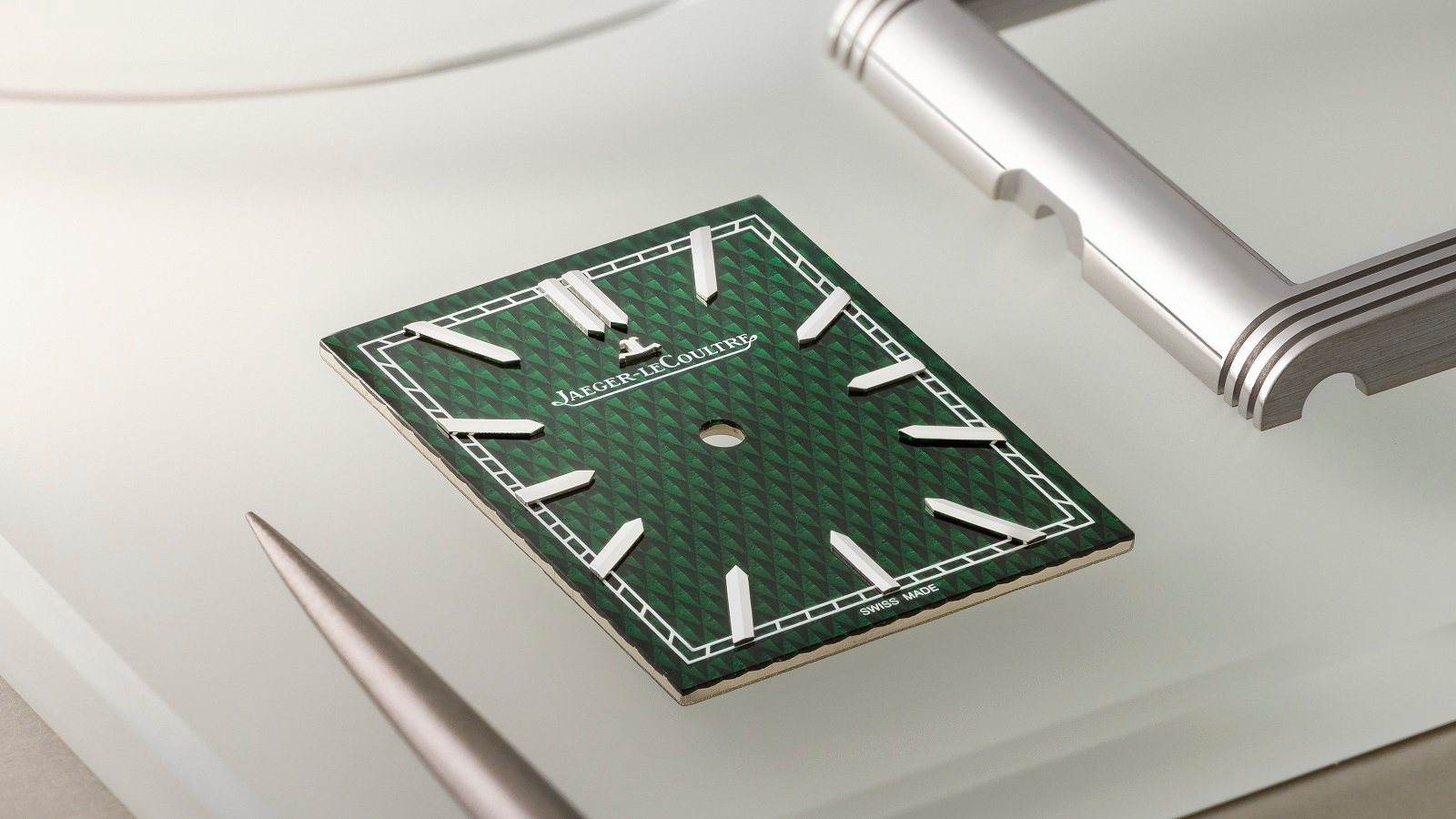 The trilogy is now complete

The Reverso Tribute Enamel Hokusai “Amida Falls” completes a trilogy of timepieces that pay homage to Katsushika Hokusai. It all started in 2018 with the creation of a Reverso showing Hokusai’s most famous work, The Great Wave off Kanagawa (Kanagawa oki nama ura). Last year, Jaeger-LeCoultre also presented another reproduction from the artist’s Waterfalls series, Kirifuri Waterfall at Kurokami Mountain in Shimotsuke (Shimotsuke Kurokamiyama Kirifuri-no-taki). The 10 new “Amida Falls” watches are intended for the Japanese market. Still, this incredibly artful watch will also look stunning outside the Land of the Rising Sun. 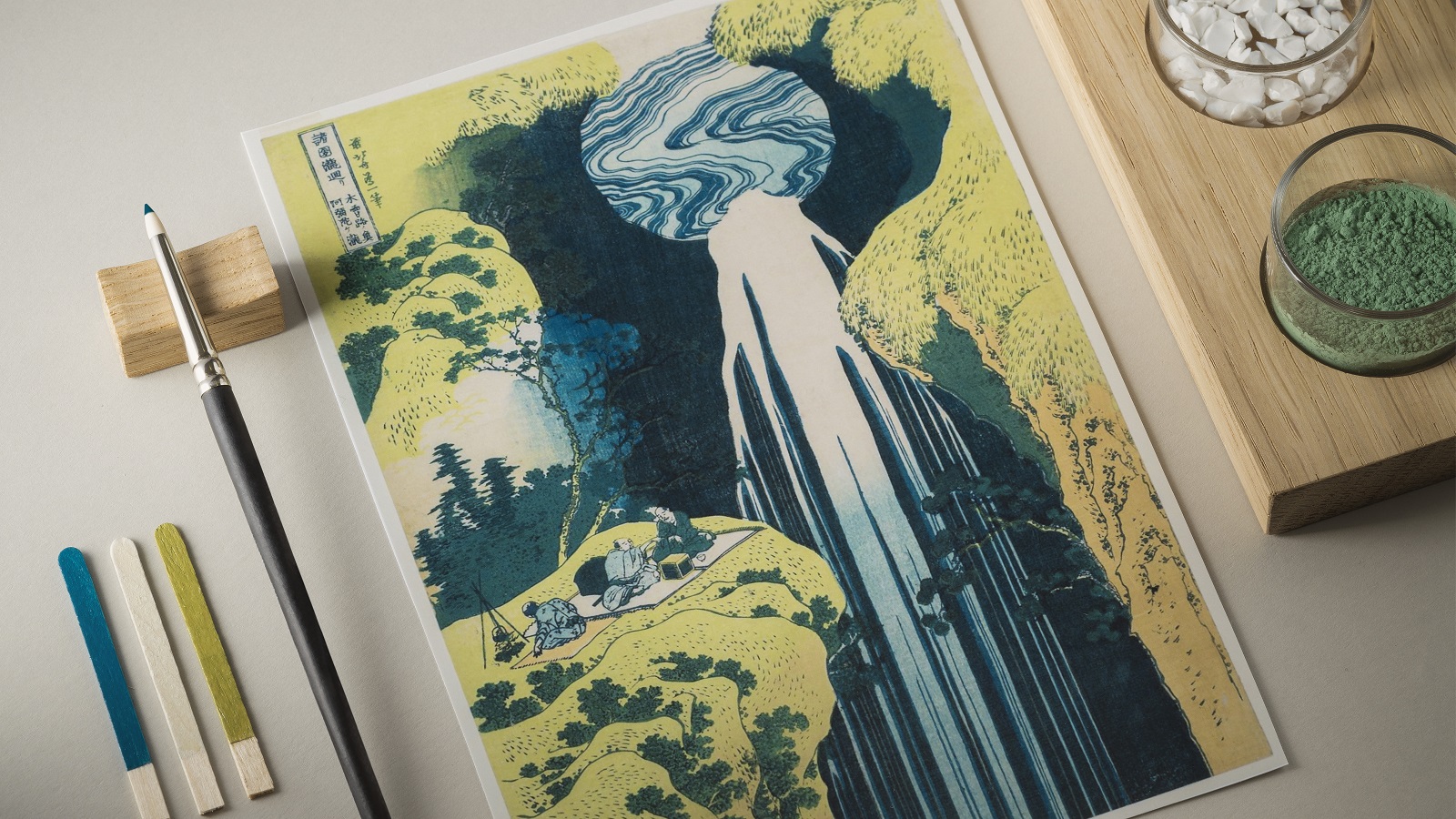 For more information on this new Reverso — the price of which I can’t find — please visit the official Jaeger-LeCoultre website.

I hope to have inspired you to wear something colorful on the wrist. Enjoy your (watch) week!