Coffee Corner Watch Talk: The Homecoming Of A Winning Seiko Chronometer And A Lange Pocket Watch

And who wants pizza with their morning coffee? Come on, it’s fresh from Mr Jones!
Lex Stolk
comments 10
Share

Let’s start the week with coffee and pizza! Oh yes, and the homecoming of a Seiko chronometer and a Lange tourbillon pocket watch. The Seiko Museum has recently added a rare and important watch to its historical collection. It is one of the 73 Seiko Observatory Certified Chronometers produced in 1969 with movements that passed the rigorous 45-day Neuchâtel Observatory Chronometer test. This particular watch was in the possession of the Swiss Kocher family. Fifty-three years after the watch’s creation and precise achievements, it’s now back home and on display at the Seiko Museum in Tokyo. Also, a complicated pocket watch with a tourbillon makes its way back to its place of origin. The A. Lange & Söhne “centennial tourbillon” from 1900 returns to the Museum Bautzen in Saxony. But before you start planning your trip, have a coffee and a slice of pizza by Mr Jones, and enjoy this Coffee Corner Watch Talk.

You think I’m joking, right? Well, I’m not. You can pair wine with food, and you can also pair coffee with food. And since coffee is one of my absolute favorite drinks and I just can’t say no to pizza fresh from the oven, I’d like to enjoy both in one sitting. But, as with wine, you have to pay a little attention to the combination. For instance, don’t ever (and I mean EVER) have a cappuccino with Hawaiian pizza! What does go quite well together, though, is a traditional and simple pizza with a bit of salami — it’s a Monday morning, after all; we have to pace ourselves — and the smoky taste of a Sumatran coffee bean. It’s a classic case of one flavor bringing out the other and vice versa. Enjoy! 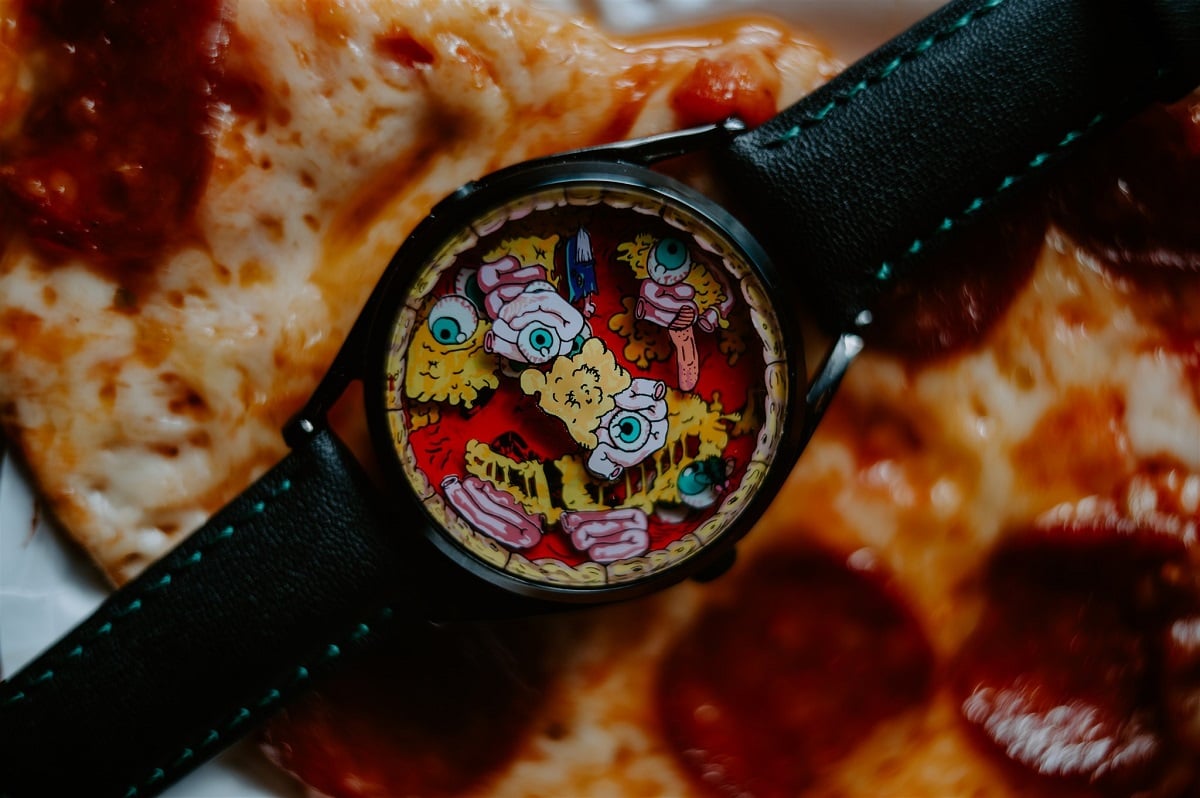 The Zombie Pizza (£195) is a gruesome yet tasty design by Mariana Calderón that, according to the British watch brand, “celebrates the macabre world of the horror comic.” What you’re looking at is a possessed pizza with the usual ingredients like traditional cheese and tomato but also some revolting toppings like eyeballs, intestines, and human limbs. Funnily enough, the most disgusting topping in the history of pizza — yes, pineapple — is missing. But having that on the dial would make the watch impossible to wear.

If you’re curious about how to read the time, you start by looking at the position of the severed finger for the hour. After that, spot the fly that indicates the minutes. Feeling a bit puckish? I’m sorry to disappoint you, but there’s a line for the next batch of pizza. It’s coming, but you have to be patient. Check out the queue on the Mr Jones website. 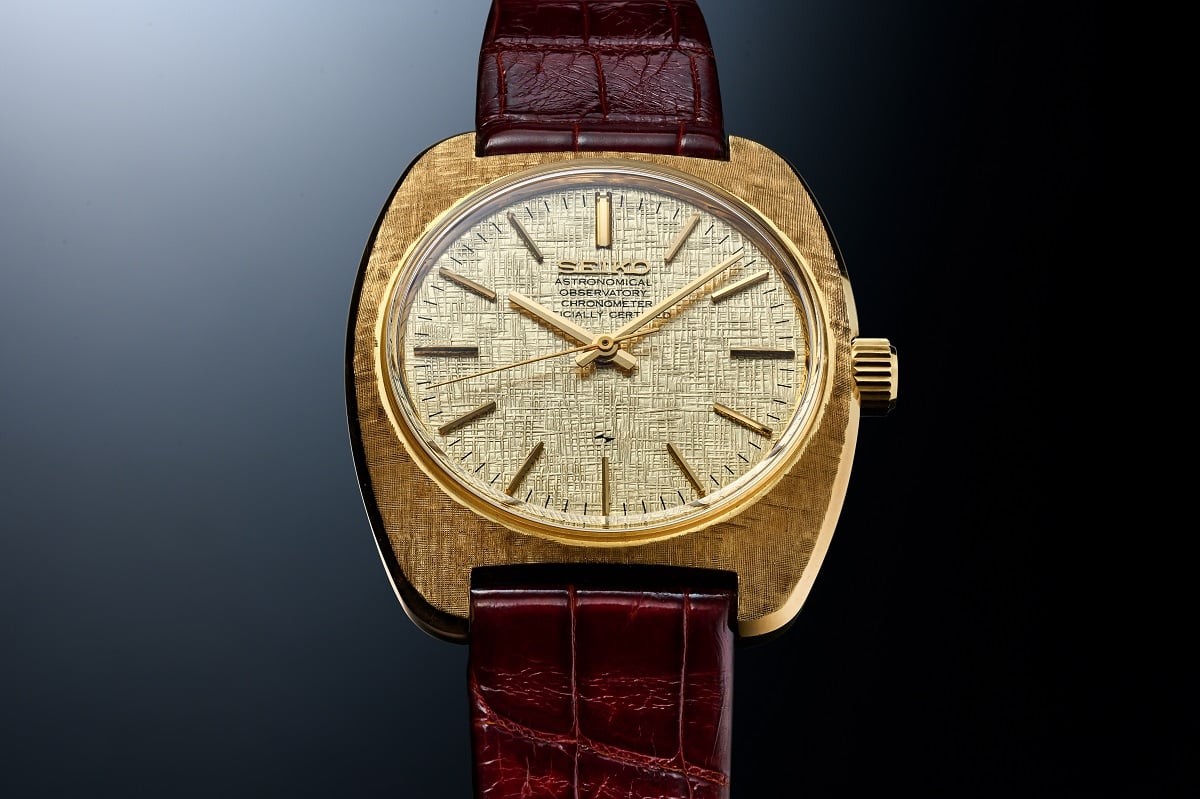 The homecoming of a winning Seiko chronometer

This watch is one of 73 Seiko Observatory Certified Chronometers produced in 1969 with movements that passed the rigorous 45-day Neuchâtel Observatory Chronometer test, and it’s finally back home. And with Japan having finally reopened to tourists, you even go have a look at it if you want. You’ll find it in a permanent exhibition on the fourth floor of the Seiko Museum in Ginza, Tokyo. The watch has quite an interesting story to tell. After passing the chronometer test, Swiss horologist Hans Kocher bought it. Kocher was the watchmaker who led the development of the famous Chronomatic Calibre 11 chronograph.

After his death, the hand-wound gold Seiko chronometer remained in the possession of the Kocher family. Last year, however, the family contacted Seiko to offer the historic watch back to its maker. In July of this year, the Deputy Director of the museum Noboru Miyadera visited the family in Switzerland to collect the watch and bring it back home to Tokyo. As you would probably expect from a watchmaking family, the watch had been carefully looked after. As soon as Miyadera-san turned the crown, the watch started running again for the first time in several decades — a magical moment, for sure.

For further information about this watch and Seiko’s 141-year history, please visit the Seiko Museum website. 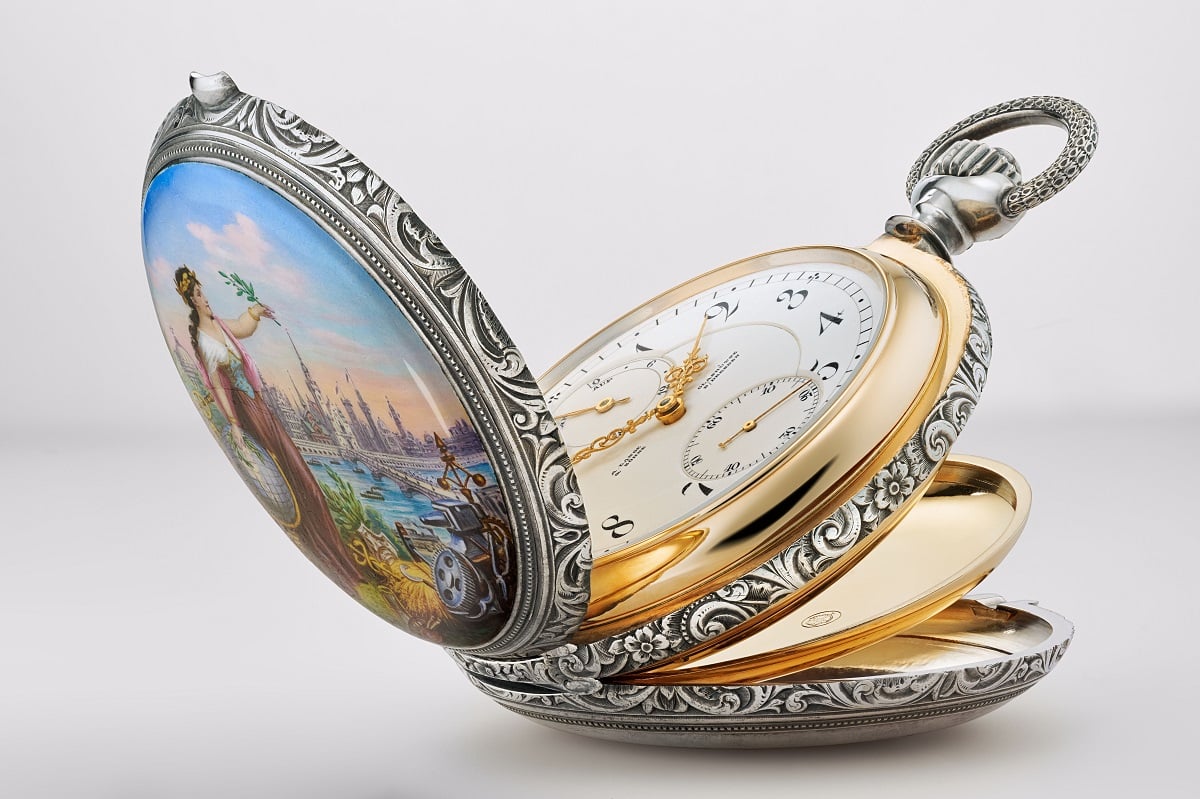 The A. Lange & Söhne “centennial tourbillon” returns to Saxony

Watches not only travel back to Japan, but they also return to Saxony, Germany. Indeed, one of A. Lange & Söhne’s most famous and valuable pocket watches has made its way back home. That home is the Museum Bautzen in the town of Bautzen, where the watch had been lost in the tumult at the end of WWII. The highly decorated pocket watch in a gold hunter case prominently shows the enameled painting of the goddess Minerva.

A technical highlight is the presence of a tourbillon, a rarity for the traditional Glashütte atelier. The brand’s archives detail only 12 tourbillons made between 1892 and 1925, of which just nine examples have accompanying delivery records. The “centennial tourbillon” bears the No. 41000, and it was presented by Emil Lange at Exposition Universelle in Paris in 1900, hence its nickname. Lange’s “centennial tourbillon” is outfitted with a caliber that combines a one-minute tourbillon with a fusée-and-chain transmission. It also features an AB/AUF (“up/down”) power-reserve indicator. Yes, this watch was a source of inspiration for many of A. Lange & Söhne’s modern wristwatches. It’s good that the brand’s historical muse is now “living” somewhere close to the manufacture.

There’s no word yet on when you’ll be able to visit the A. Lange & Söhne “centennial tourbillon”, but keep an eye on the Museum Bautzen website if you’re interested. 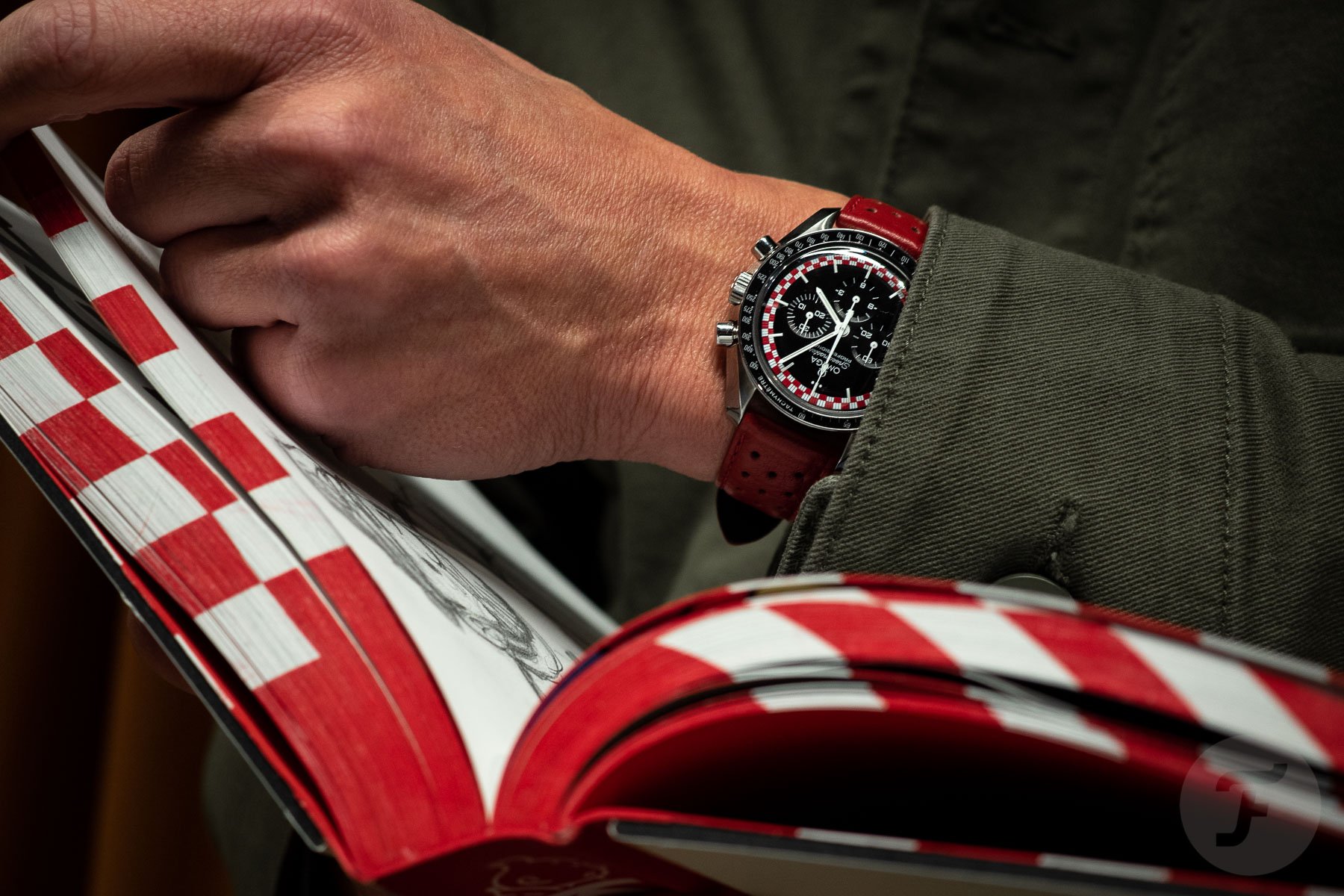 Tintin and Mercedes are made for each other

You must have noticed the Omega Speedmaster “Tintin” ref. 311.30.42.30.01.004 on my wrist. It’s not mine. It’s RJ’s — no surprise there — but he didn’t mind taking it off so I could have a go. He even switched the standard steel bracelet for a very funky GLC strap. And just as this Speedmaster is not your typical Speedmaster, the strap is not just any old strap either.

The brick-red strap is made from the leather seat of a vintage Mercedes-Benz 190 SL, a convertible that could be ordered with either a removable hard top or a foldable soft top. The car was produced from the mid-1950s until 1963, and it certainly was pretty. And so is the perforated strap that, in my humble opinion, perfectly matches the colorful and racy Speedmaster Professional Racing. 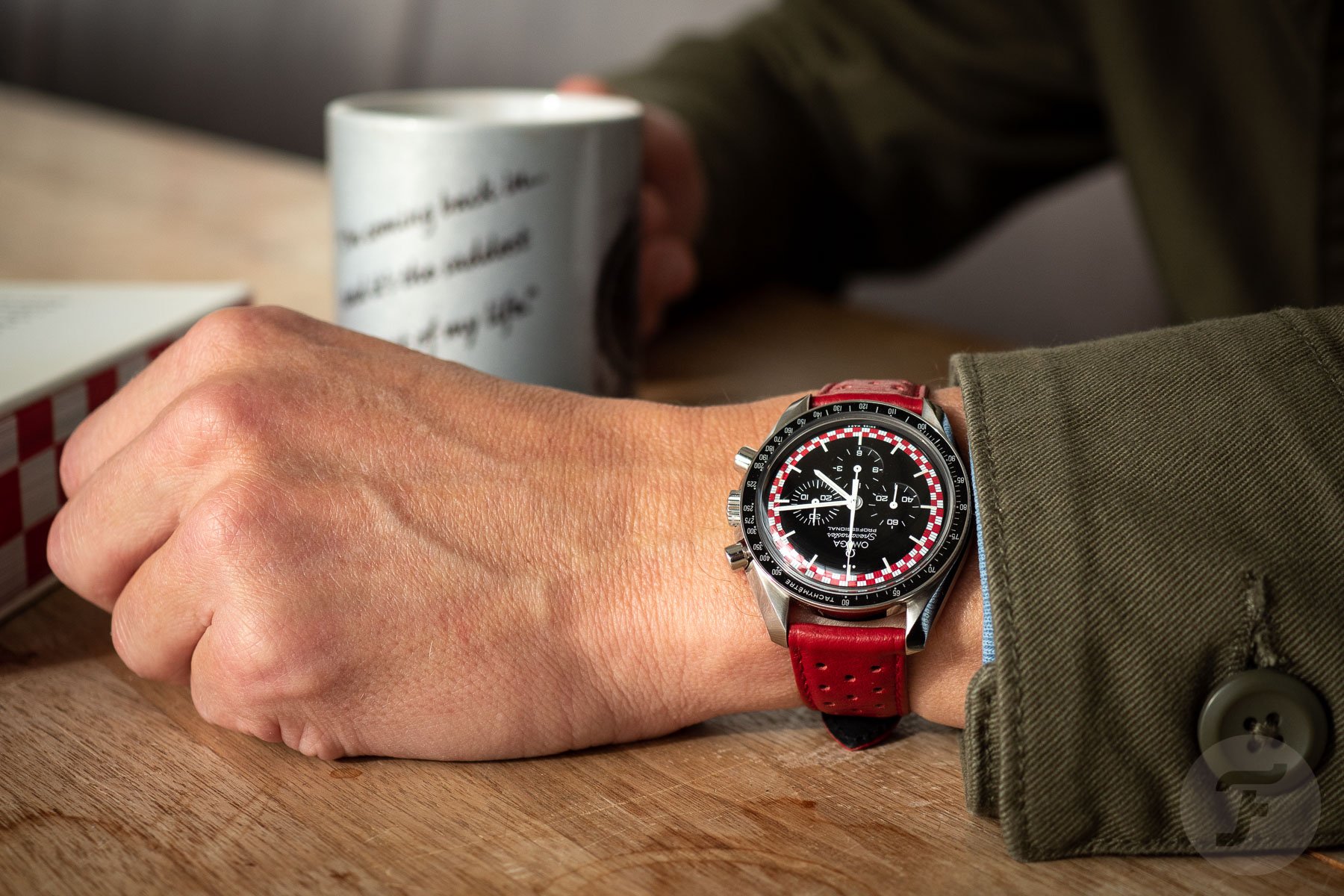 You know, of course, that the watch got the nickname “Tintin” because of its red-and-white-checkered outer ring on the dial that resembles the rocket that got the Belgian reporter to the Moon. RJ bought this particular example in Tokyo back in 2017. He got a discount for waving his EU passport and paying by credit card, resulting in a price that’s around six times less than the average price for a Tintin on Chrono24. You do the math. While having another coffee and a second slice of pizza, perhaps? In any case, after digesting this episode of Coffee Corner Watch Talk, please enjoy a great (watch) week!