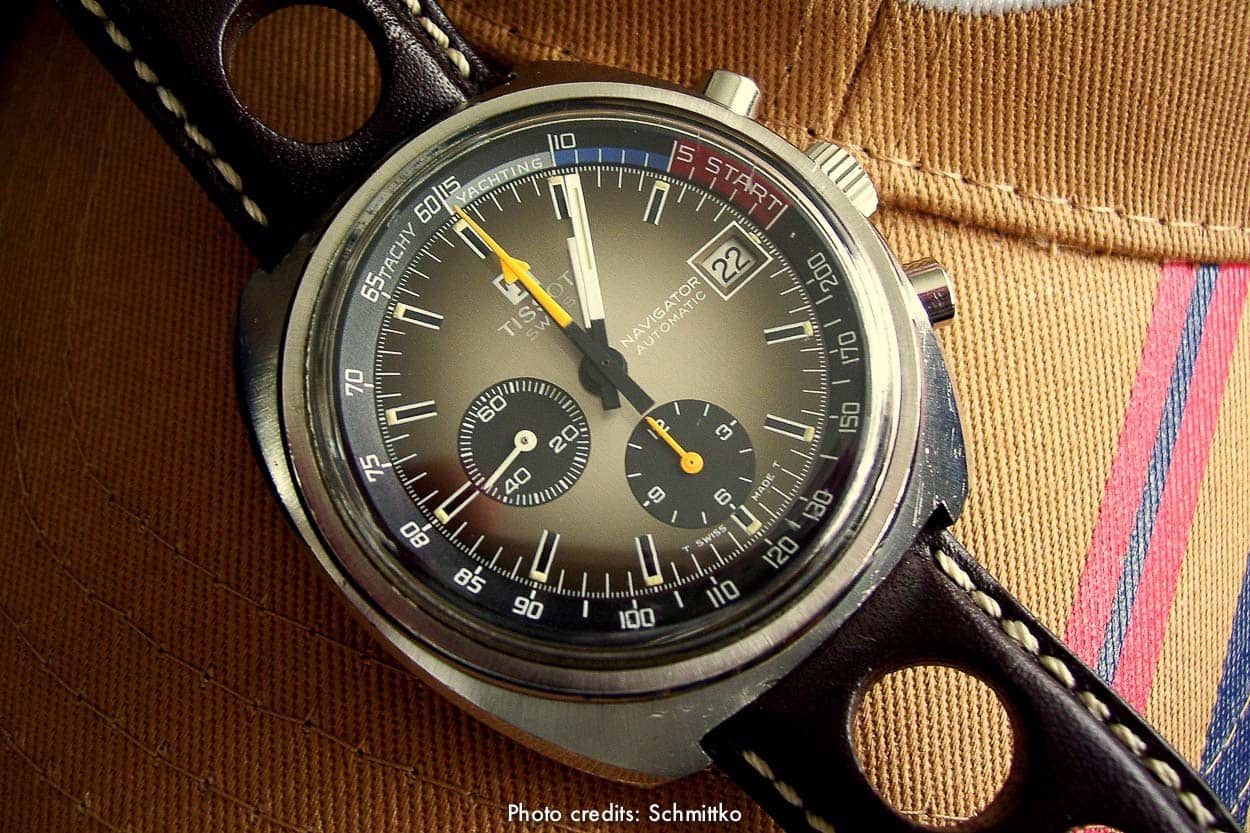 You do not necessarily have to have deep pockets if you want to acquire cool vintage timepieces. In this article I will show you an outstanding model with an interesting twist to it. Meet the Tissot Navigator Yachting chronograph.

For many Tissot is a lower brand, not comparable to the likes of Omega, TAGHeuer, Longines and the others. I beg to differ. Throughout the company’s history Tissot produced some of the most interesting and historically significant watches coming out of Switzerland. Many occasions these watches were groundbreaking as well. Think of the first antimagnetic watch, the Tissot Idea 2001 which was the first mechanical watch made of plastic in 1971 or the RockWatch and later the PearlWatch and WoodWatch. But like most of the brands Tissot produced watches for divers, racing car drivers, pilots and yachtsman.

There was a tendency that started in the late 1960s that was a groundbreaking point for the watch industry. Companies started to focus on technical sports much more seriously. They became heavily involved with car racing or yachting for that matter. It was also a design revolution. The solid, thin monochrome models were replaced by big, chunky, colorful pieces and the multicolored scale of the yachttimer just fit this line perfectly. Most of the brands came out with yachting models too. Most famous of these are probably the Heuer Skipper or the Aquastar Regatta models.

Did you know? The First World War brought a lot of business down to their knees in Europe and Swiss watch manufacturers were no exception. So to escape the financial difficulties Tissot and Omega formed an alliance in 1930 and established SSIH (Société Suisse pour l’Industrie Horlogére). Lemania Watch Co. would join this group in 1932 and became the manufacturer of not only movements but in some instances cases as well for both companies. The SSIH was the forerunner for a much larger conglomerate the World would know by the name of Swatch Group many years later.

The Tissot Navigator Yachting was introduced around 1972 as part of the company’s Navigator line. This included a series of chronographs. Some were branded Navigator some as Seastar and some even with both names on the dial. The movement inside was the Lemania 1341. This is a 17-jewel automatic chronograph movement. What makes it quite outstanding is the fact that even though it should be a 3-register chronograph, it is not. The minute register is not a sub dial but an extra minute hand that moves around the dial like a regular second hand.  A close derivative to this movement is the Lemania caliber 1340 which by the way was the movement modified by Omega to create their famous caliber 1040.

The main difference between a regular Tissot Navigator from this era and the Tissot Navigator Yachting is the 15-minute countdown scale that runs from 12 o’clock to 3 o’clock on the Tachymeter ring. From 12 to 1 it is colored grey, from 1 to 2 it’s blue and from 2 to 3 it’s red indicating the last 5 minutes before the start of a regatta. 15 minutes before the race begins the contestants receive a sound and visual signal. At this point they should set off the timer so they see how much time they have to speed up their boats. They are not supposed to cross the start line until the 15 minutes are up. At that point they should be at their best speed and begin the race. It is very similar to flying start in athletics for example.

The Navigator has a great wrist presence it is a decent but not uncomfortably thick watch. The yachting scale is a nice addition to the dial and a great conversation starter as well. If you fancy something out of the ordinary from the vintage watch world this might just be the watch for you.

If you are interested about the comparison between the Tissot Navigator Yachting and the Omega Seamaster Yachting read Kevin’s blog post on SomeTimeAgo!