You Asked Us: Is It Worth It To Have My Cortébert Sport Chronograph Repaired?

This time we’re looking at a question sent to us through our contact form by Carlos from New York. Carlos inherited a Cortébert Chronograph from his grandfather. But in a side-walk collision he, unfortunately, lost one of the chronograph pushers, and he’s now looking at how to have the watch repaired.

You Asked Us: How important is it to use an authentic part to repair my Cortébert Chronograph?

Hello! Would love to hear your thoughts on something. I inherited my grandfather’s watch, and although it was a brand I’d never heard of, I thought it was one of the most beautiful watches I’d ever seen and worked perfectly.

However, someone on the streets of NY ran right into me which popped one of the chronograph pushers that was never seen again. With a spring now coming through where the pusher was, I tried to see if I could get it fixed but it was a few grand, which is definitely out of my budget. They say Cortébert shut down a long time ago and they’d have to get an authentic part which would be hard.

The question is, do you think this is worth it? Or should I ask them to use any part? Considering that I’m no watch expert, hard to spend thousands on something, but if the company is gone and the claim is authentic, the pieces won’t get any cheaper with the passage of time. Thank you! 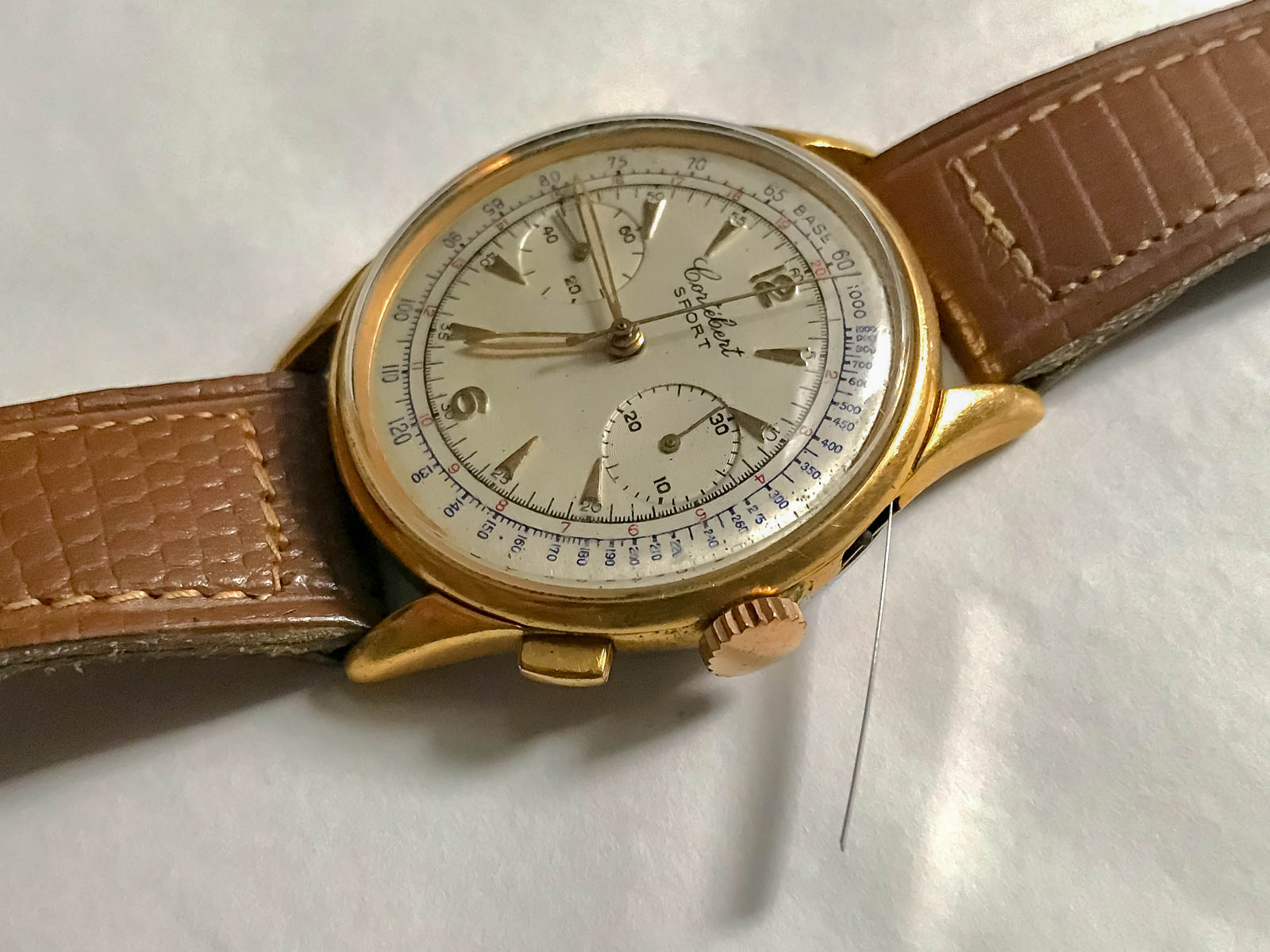 The Cortébert Sport Chronograph with the missing pusher

Upon request, additionally, Carlos sent us some pictures of his watch enabling us to better understand the situation, and how the actual part which he lost looks like. We’ll use these pictures – amongst others found on the Internet – in this article.

A quick look at the pictures learned us two things. First that this is an attractive watch indeed, and second, that it is a rectangular pusher which is missing. Opposite to the more common, and more easily found, type of round pushers I mean.

A brief history of Cortébert

Cortébert was a company of great importance in the past indeed. It was Abraham-Louis Juillard who already in 1790 opened his small watchmaking store in the little village of Cortébert, Switzerland. While this year is commonly used as the date of founding, it was only in 1855 that the brand Cortébert was registered.

Cortébert became one of the most desirable premium watchmakers and produced an extensive range of own calibers. They became well known for their railroad watches, which were sold throughout Europe. Cortébert helped to establish the watch industry in Russia by selling machinery and technical advice. The Cortébert pocket watch caliber 616 was produced in Russia, and became well knows as the ‘Molnija’. Production of this caliber was only ceased in 2014. In fascist Italy (were Mussolini rejected foreign brand names) Cortébert distributed their railroad watches under the brand name ‘Perseo’. Perseo still exists today as an independent Italian brand.

In the early 1970’s, Cortébert couldn’t keep up with the quartz revolution. It had to close its doors and stopped production completely. 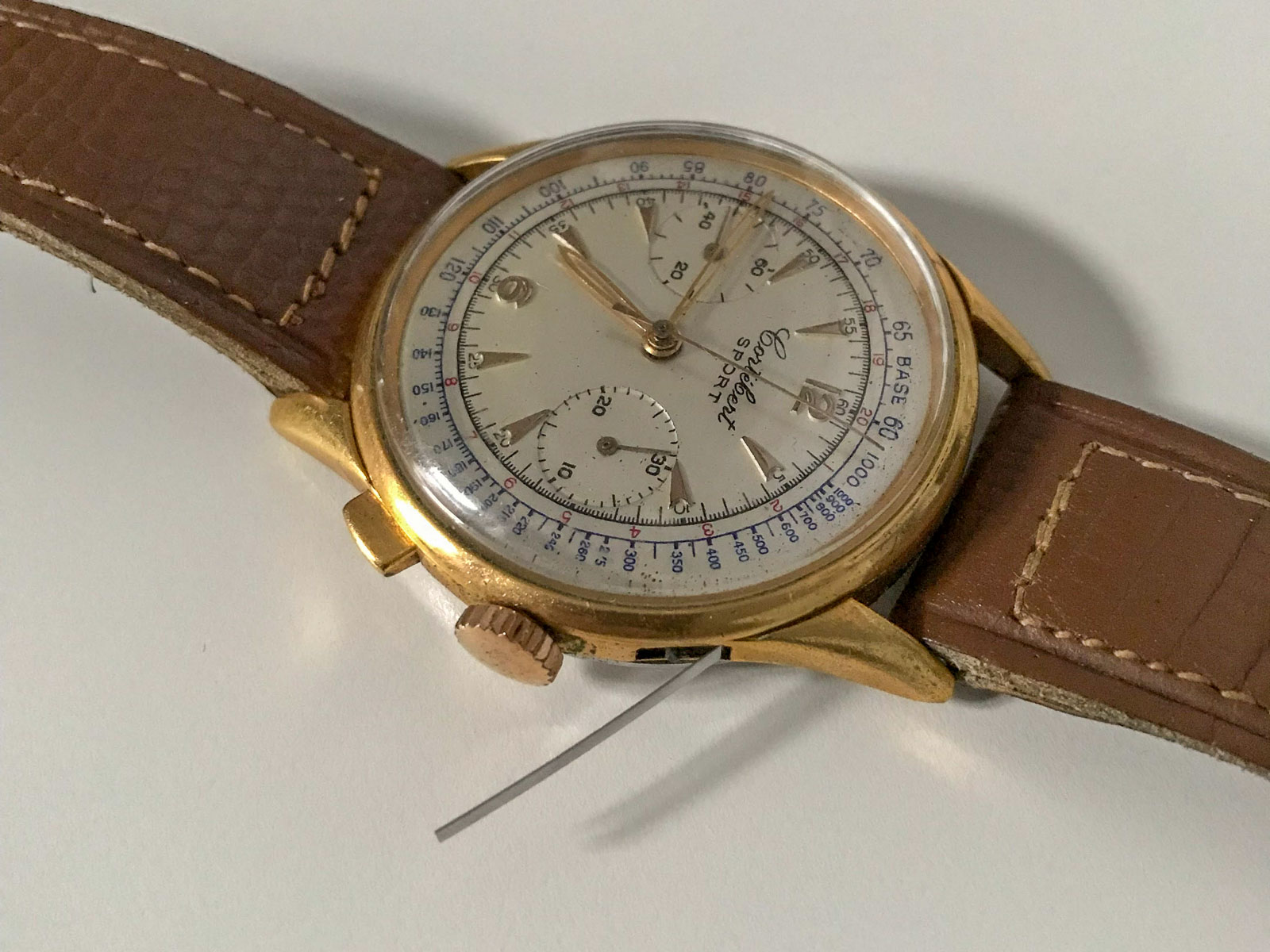 On To The Actual Watch

So far for history, on to Carlos’ watch. Upon closer inspection of the pictures, some doubts come up. For instance, I doubt if the printing of the dial is still the original. It seems a little rough to me, it might very well be that the dial has been reprinted in the past.

The hands look to be of a type which can be filled with luminous material as well. At the moment they’re not (anymore). Which makes sense, because there’s no luminous material in the dial to align with it anyhow. All in all, these are indications that the dial might have been reprinted.

The crown seems of another color of gold than the casing and the hands and markers of the watch. Most probably it has been replaced in the past. Which is quite common of course. Mind you, this is a hand winding watch, the original crown should have been worn out by now, we think. 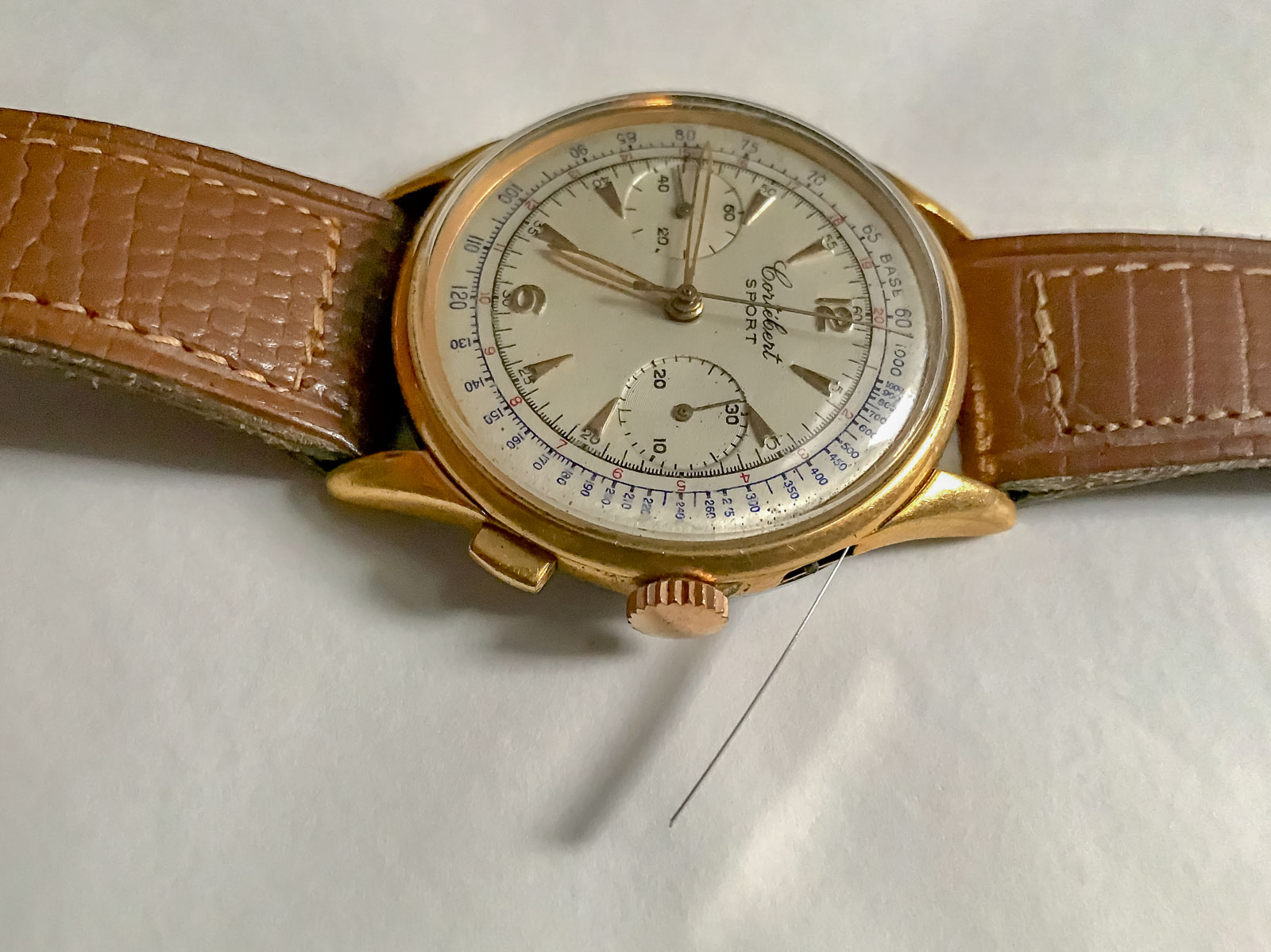 Why Is This Important?

It will be clear that it’s an almost impossible journey to find an original Cortébert pusher for this watch. Carlos has already mentioned that he got information that obtaining one might be as costly as a few thousand dollars. If possible at all. Because it seems that the watch had – quite understandably – some parts replaced already in its long past, I think it’s of no use or added value to replace the lost pusher specifically by an all original one. Although this type and model of pusher might not as readily available then it’s round counterpart, it will be possible to find one. Many more watch brands have used this type of rectangular pushers.

It’s important to know which type of caliber is used in this watch, this will make it easier to determine which pusher is needed. A watchmaker can have a quick look; my guess is that it will be a Cortebert 429 or Venus 150.

To put the cost for repair into perspective, I’ve looked on Chrono24 to see if I could find similar watches. And in fact, there are. I found certainly three watches which are quite comparable to Carlos’ watch. They happen to be all in Germany and vary in price from € 1.100,= to € 2.450,=. The condition of the one lowest in price is most comparable to the condition of Carlos’ watch, the most expensive is in better condition, however, is a more corresponding model.

So, in terms of material value, paying a few grand for the repair of the watch really isn’t relevant. I’ve asked a watchmaker specialized in this kind of vintage chronographs, and he estimated the repair more at a few hundred than a few thousand.

Have A Question For Us?

Please fill out the form below.