Czapek’s highest-end Place Vendôme model, featuring a tourbillon and GMT function, was released in two new versions during Baselworld 2019. Ombres and Etincelles, or shadows and sparks. During the fair, we were able to take a closer look at the Ombres model and are happy to share our findings. 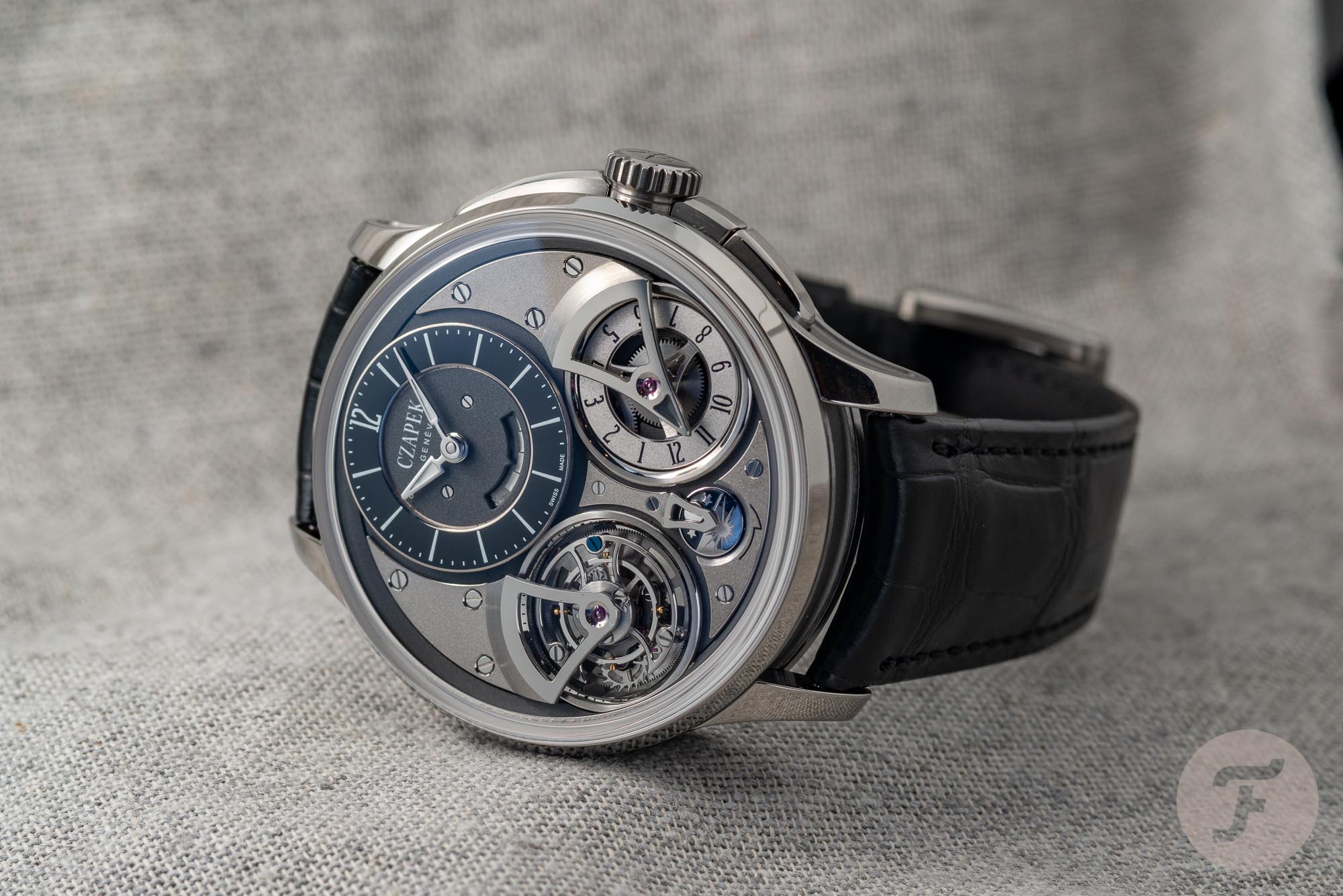 Franciszek Czapek was a Bohemian-kingdom-born young man who emigrated with his family to Poland in the early 1800s. From Poland, because of the collapse of the Polish uprising, he fled to Switzerland and became as Francois Czapek a successful watchmaker. Francois started working with local partners in Geneva, like Moreau and later Antoine Norbert de Patek. With the latter, who was a Polish immigrant as well, in 1839 he founded the Patek, Czapek & Cie company.

During this partnership, which lasted six years, they created several exceptional timepieces. In 1845 however, both gentlemen decided to split up again, both continuing to produce timepieces though. We probably all know what happened to Antoine Norbert de Patek, but Francois Czapek didn’t do badly as well. He became purveyor to the Imperial Court, Watchmaker of His Imperial Highness, Prince Napoleon. And had boutiques in Geneva, Warsaw, and Paris at Place Vendôme. Further, he wrote a book on watchmaking, one of the first of its kind ever written in Polish.

…Francois Czapek in 1869 mysteriously disappeared from the scene 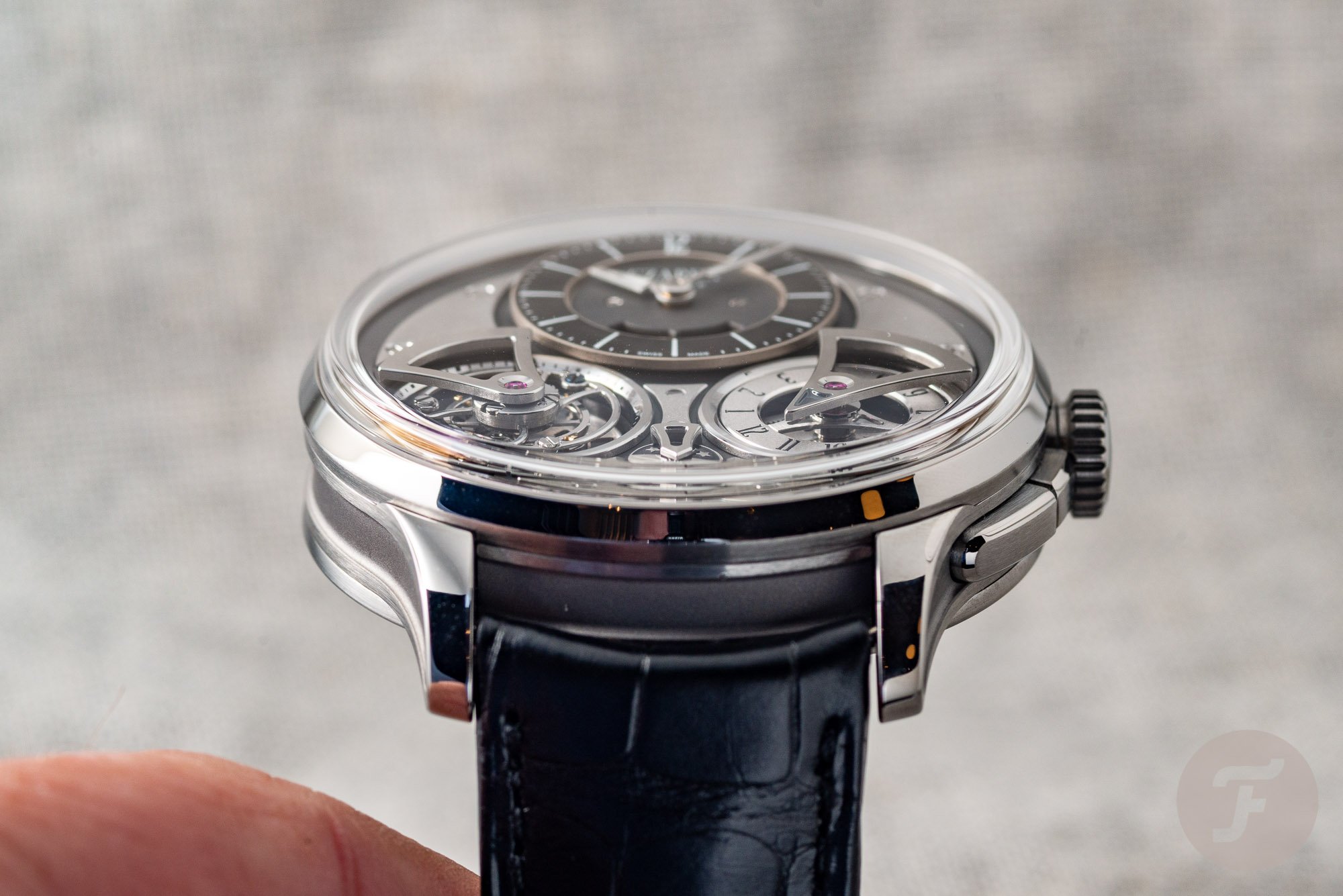 Strangely enough, and contrary to for instance Patek who meanwhile worked with Adrien Phillipe, Francois Czapek in 1869 mysteriously disappeared from the scene. It wasn’t until 2012 that the Czapek company name was re-established, while on November 10, 2015, the company was relaunched publicly. In 2016 Czapek’s first model, the Quai des Bergues wins the Public Prize at the Grand Prix d’Horlogerie de Genève. In the two years to follow Czapek launched a new model with a new caliber every year. The Place Vendôme tourbillon in 2017 and the Faubourg de Cracovie chronograph in 2018.

2019 didn’t see a new Czapek model nor caliber. However, the brand opened its first boutique, located in rue de la Corraterie 18, Geneva. To celebrate this milestone a special limited edition of 18 pieces of the Quai des Bergues was introduced. Made in a stainless steel so-called Revolution case with a dark blue Aventurine dial, and Fleurs de Lys white gold hands. 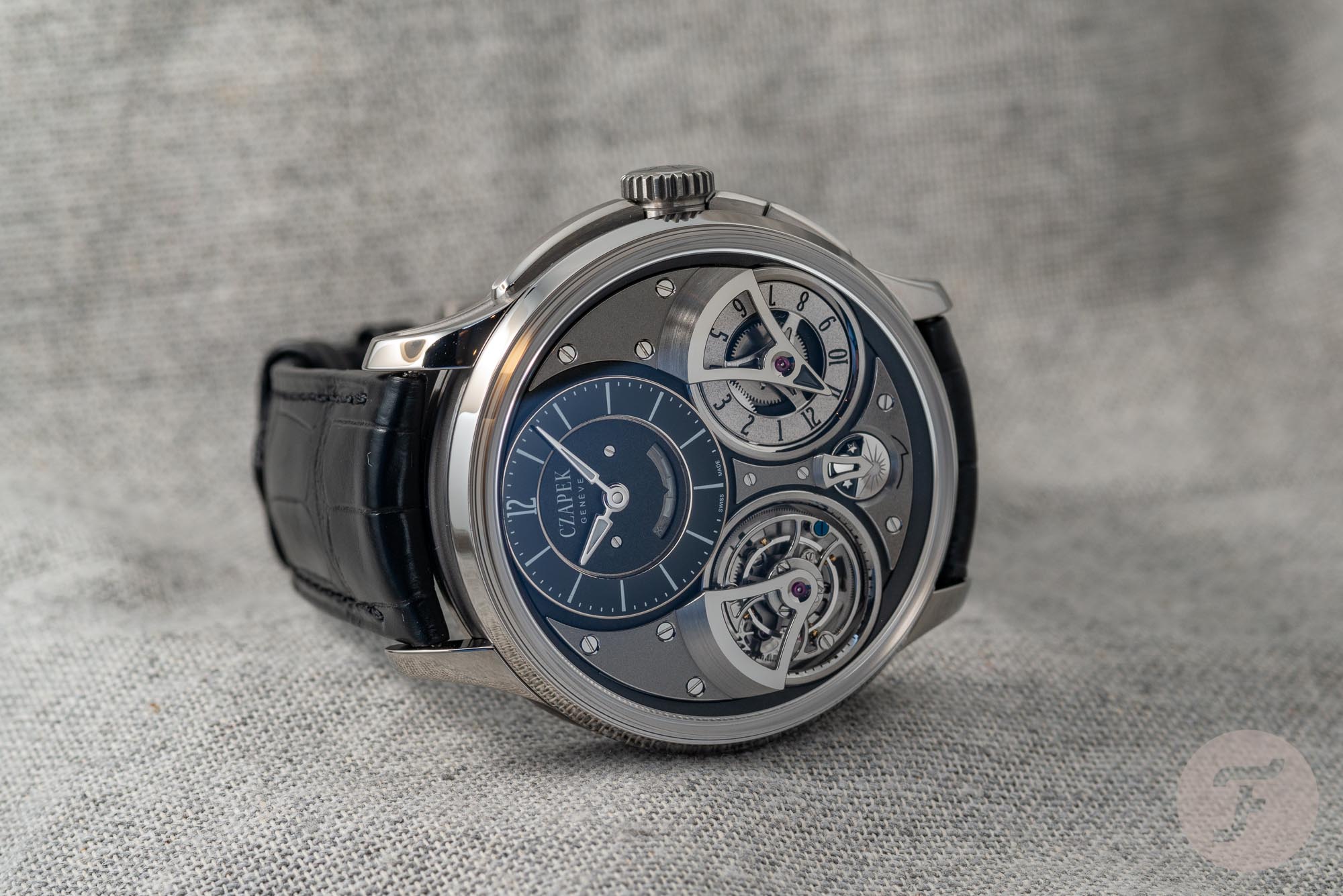 The Ombres model, in my opinion, is the one which differs most from the ones introduced in 2017

And thus as well, to be unveiled at Baselworld 2109, Czapek introduced two new editions of its Place Vendôme model, as said the Ombres and the Etincelles. The Place Vendôme Tourbillon Suspendu collection is of course named after the Parisian square where François Czapek had a boutique in the mid-19th century. The Place Vendôme features a one-minute suspended tourbillon, together with a second-time-zone, a day/night disk, and a power reserve indicator.

The Ombres model, in my opinion, is the one which differs most from the ones introduced in 2017.  Not only is it produced in titanium, which wasn’t available in the Place Vendôme models until now, but it also sports different hands and numerals. No more Fleur de Lys hands, and no more Roman numerals. To be complete, the Etincelles version is made in platinum, still sports the Fleur de Lys hands and Roman numerals, but now sports 72 baguette-cut diamonds (and has a price of CHF 215,000.=). 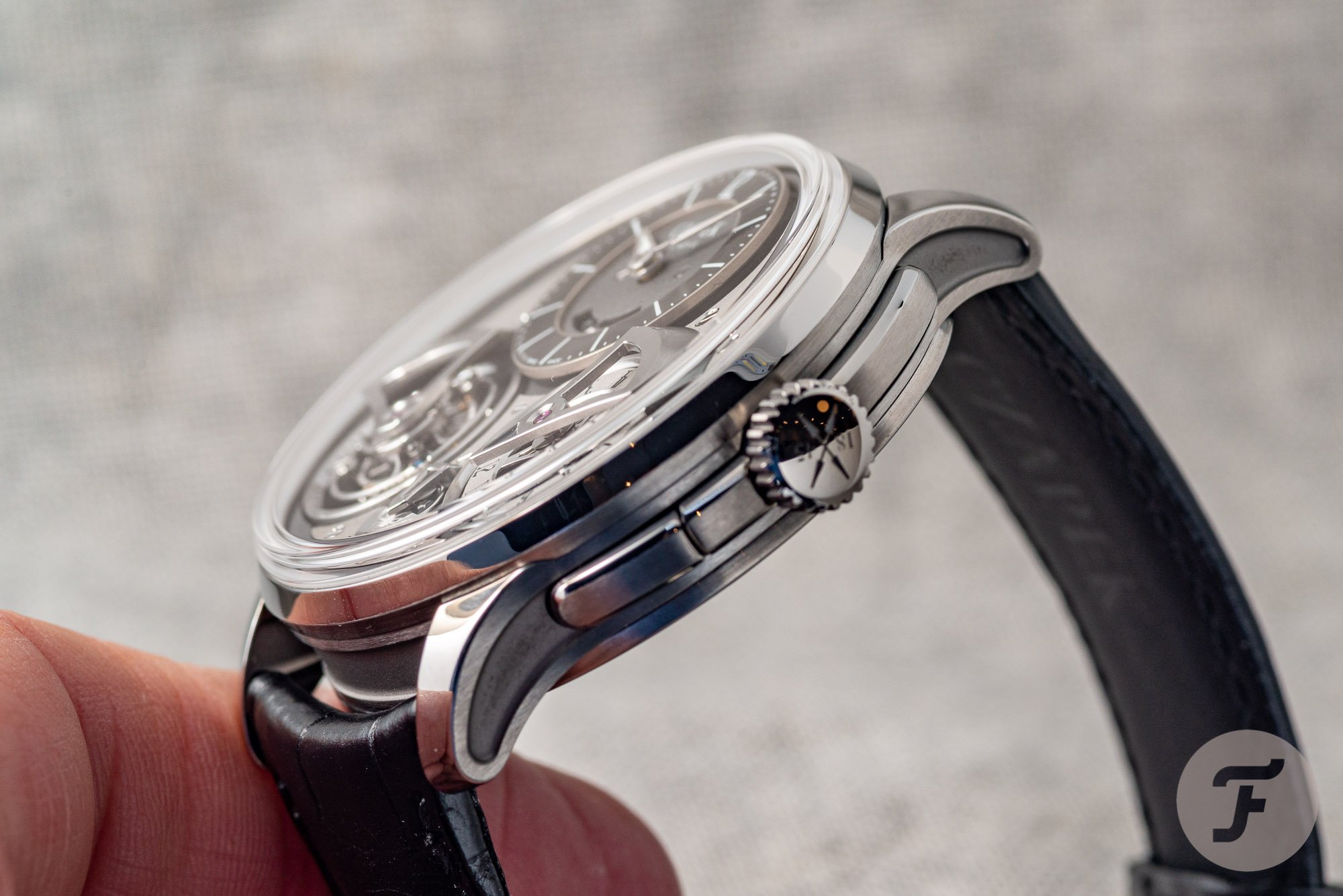 Czapek’s own manually wound SXH2 caliber powers all Place Vendôme models. It’s beating at 21,600/h (3 Hz), and the single barrel spring delivers 60 hours of power reserve. The diameter of the SXH2 caliber is 34.8 mm, with a height of 9.8 millimeters. Although rather large in diameter, the height allows the movement to be used in discreet and elegant watches. Bridges are satin-brushed while ratchets are Czapek-traditionally open-worked. In the back of the movement the inscription Tourbillon Suspendu – Ici et Ailleurs is engraved, which is a reference to the second time zone. 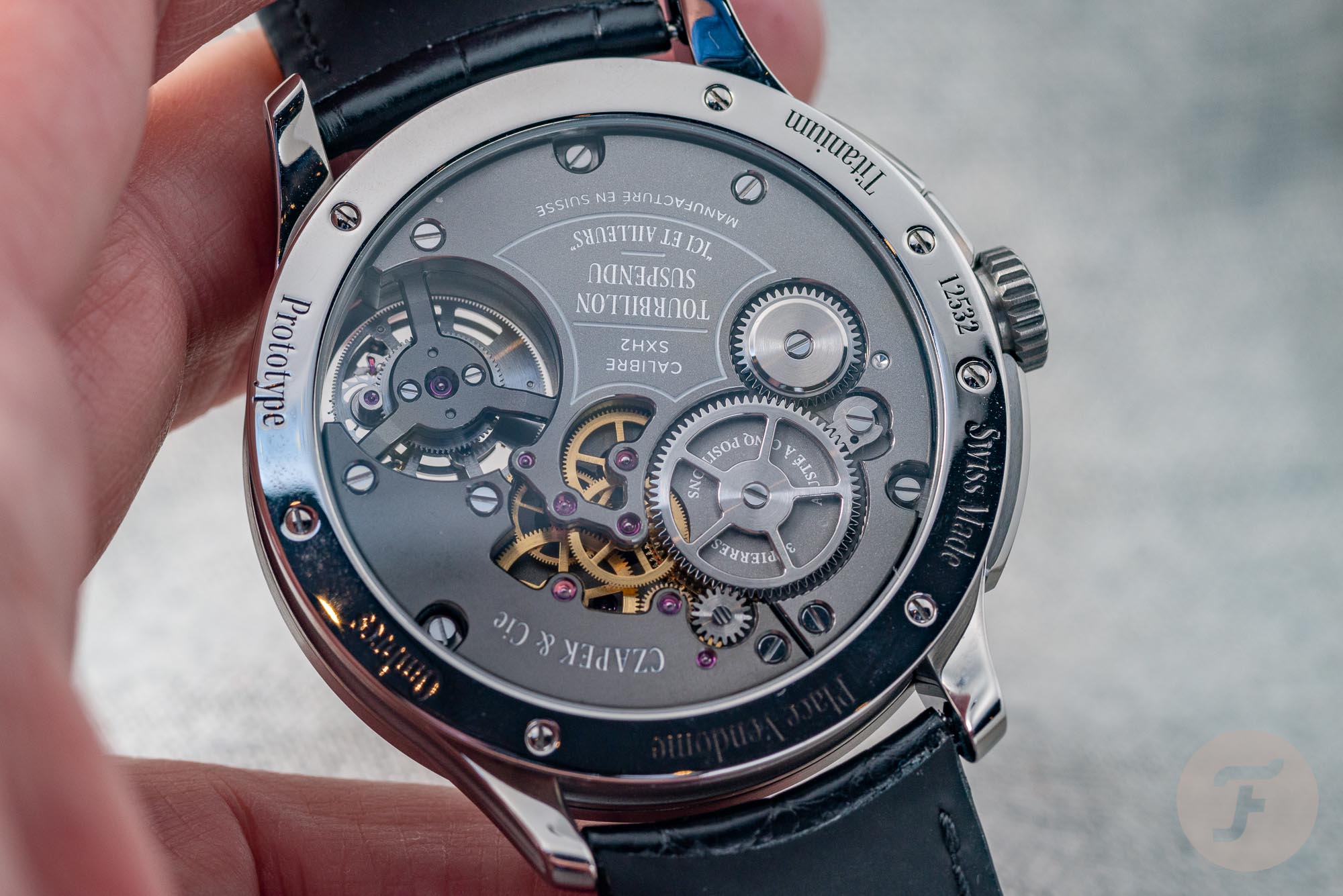 While the new platinum Etincelles version comes in a limited edition of only 10 pieces, from the, in this article shown Ombres 25 pieces will be produced. From earlier versions, only 10 came in rose gold, while another 15 in platinum. So far I have to say the titanium Ombres is my favorite of all, which Czapek reflects by the largest number of watches which will be produced in this series as well. I love the more sporty hands and equally the Arab numerals and index markers. They perfectly fit its somewhat more technical character, as shown by titanium as a choice for the case material as well. 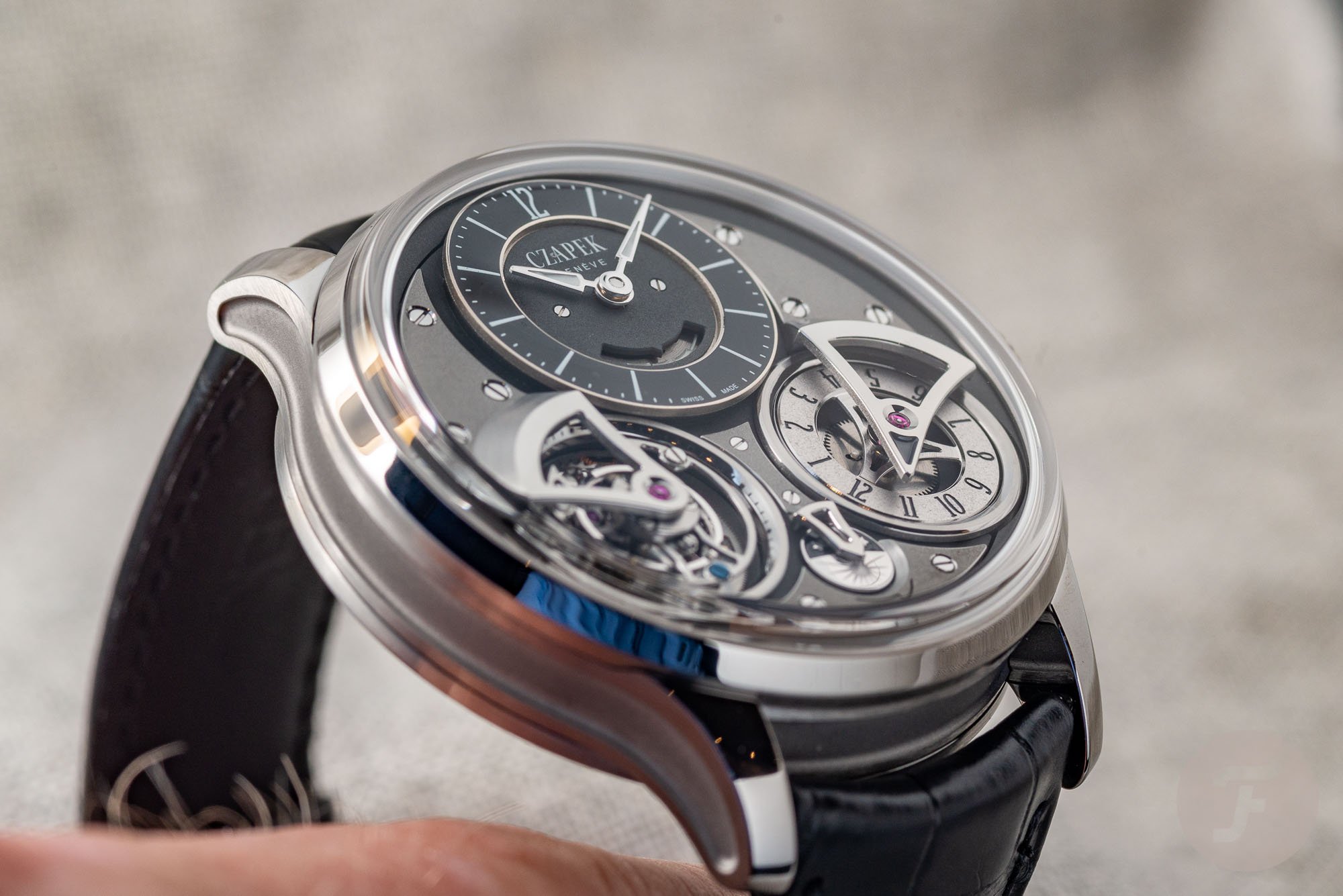 For more Fratello-information on Czapek please have a look at our other reviews, linked below:

Czapeks own website can be found through www.czapek.com Specifications and pricing on the watch in this review are listed in the form here below the gallery.