How many have-you-ever-heard-of-this-watch brands can launch a limited series with a price tag around 5.000 euros? Well, the Czech watch manufacturer PRIM, originally from Czechoslovakia, can. And to great fanfare – the watch was sold out within two weeks! 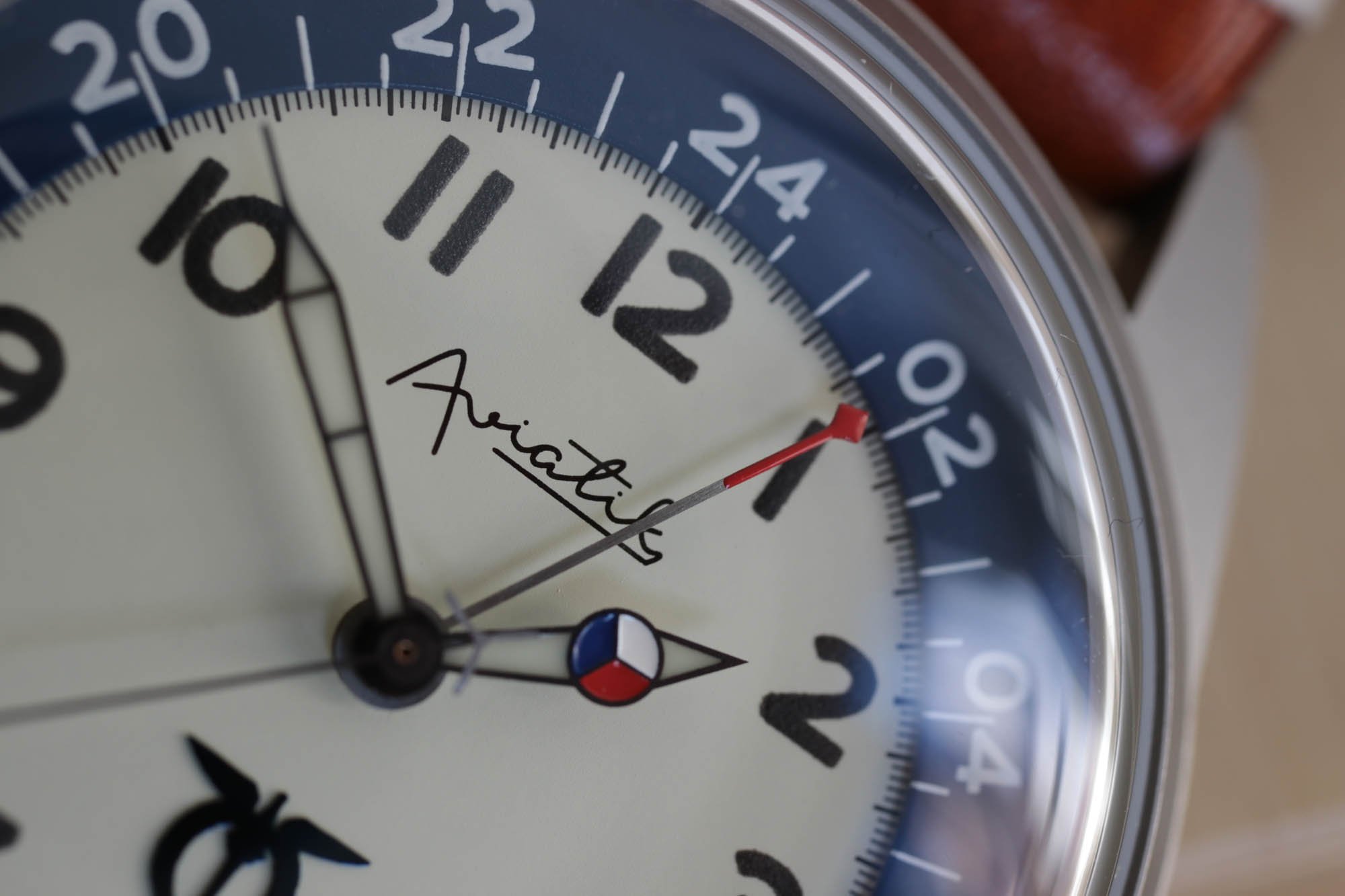 We are lucky we managed to get our hands on the only prototype marked 00/50. Initially, we thought we would write a hands-on review for a novelty piece you can then order. Today, not even a month after its introduction, we bring you a hands-on review of an already collectable piece. Probably hard to get to now. Meaning if you want to grab one, you will need to search for an owner first. Watch in question? The Prim Aviatik with a manual 93.1 calibre. 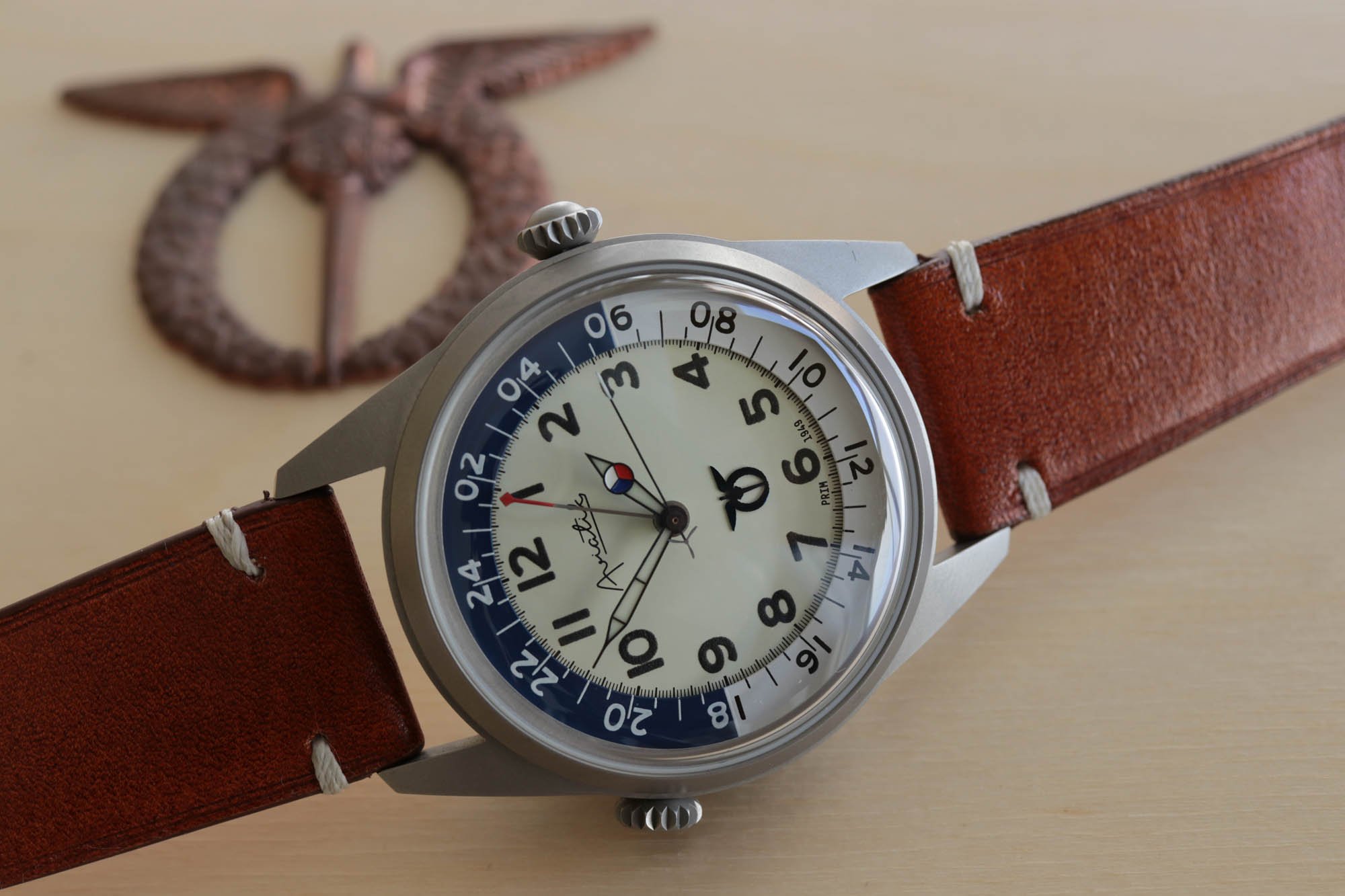 The Prim Aviatik Limited Edition commemorates two significant anniversaries for the watch brand. In 1969, twenty years after the brand was born, a new dedicated factory was opened in Nove Mesto nad Metuji. This answers the question of why a 50 piece limited edition. Why then the aviation theme? All you have to do is take a peek at the case back. Decorated with a stainless-steel engraving, before you lies the silhouette of the Letov S-2, the first military aircraft designed and mass-produced in Czechoslovakia. I like that Prim decided to keep “K” instead of opting for a “C” in the name, making the Aviatik a really honest local piece. Opting out of standard marketing techniques is a small, but valuable detail. 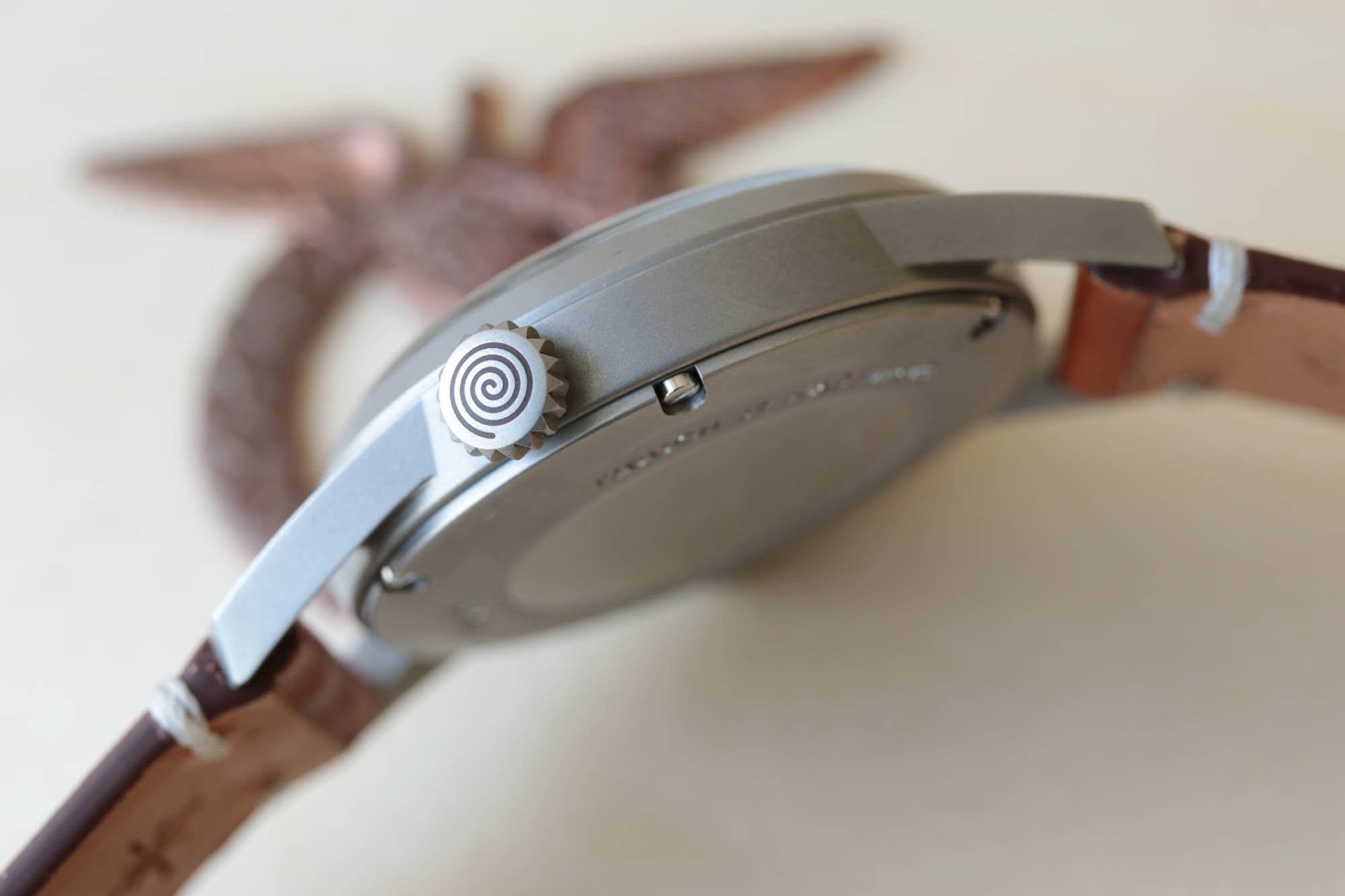 Why did the Aviatik sell out so quickly?

Since the seventy years of its existence, Prim has produced over 13 million wrist watches. What you are looking at right now is very different to anything they have made before as it is the first ever Prim model built with two crowns. The onion-shaped crown sitting between the nine and ten has no lock position and operates the inner twin-colour 24-hour bezel. Together with the fourth central hand with a red square tip, it allows you to read a second-time zone when travelling. The GMT crown sporting a spinning propeller pictogram is nicely flat and turns comfortably. The crown for setting time is similar but has more of a rounded belly sticking out of it. I would prefer if the crowns were both flat, as the different central crown styles disturb the overall design a little. 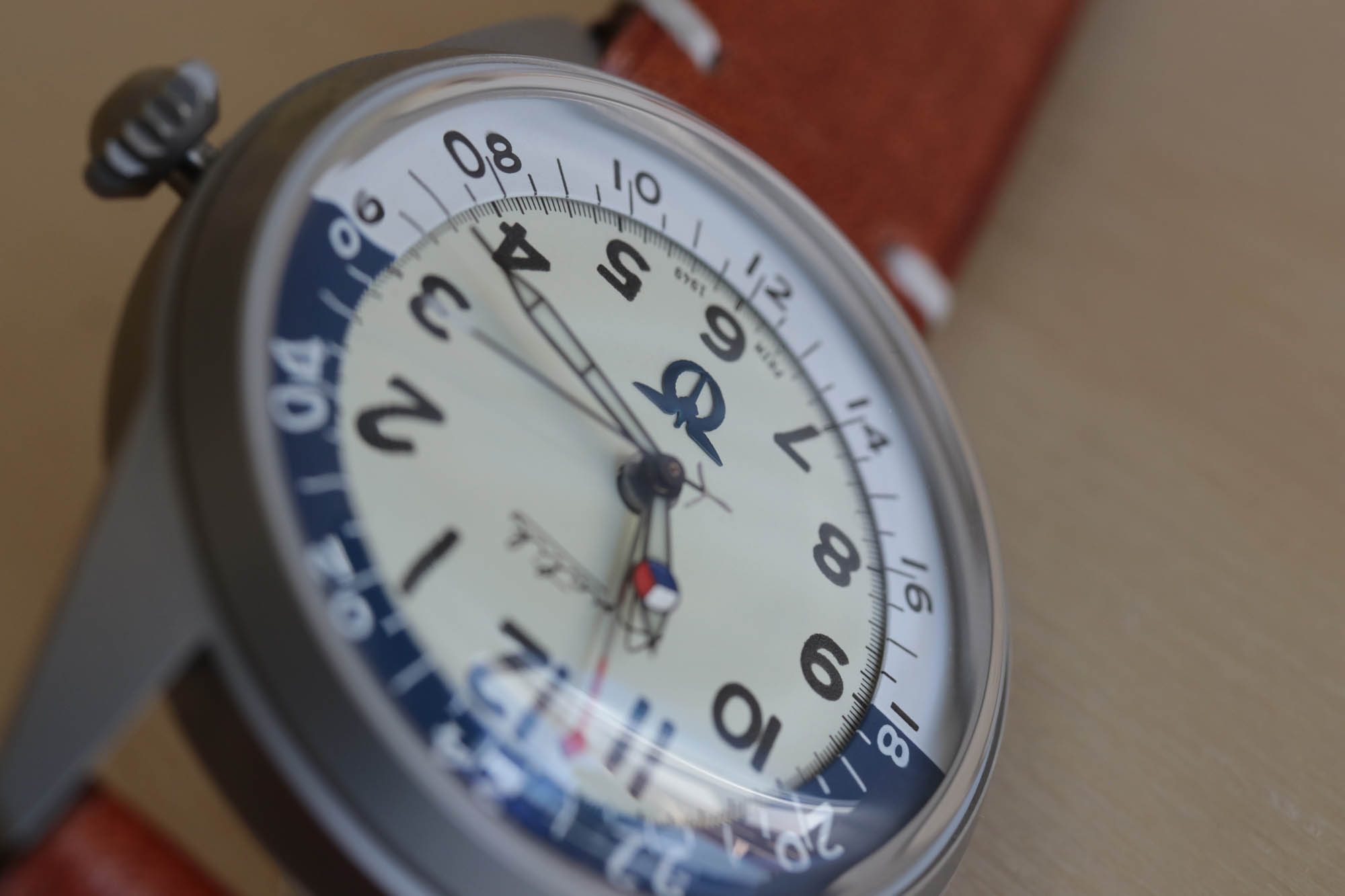 I have to admit; I was positively shocked when I saw the first picture of the Aviatik released. As I live in Slovakia, just three hours from the factory in Czechia, I know Prim production quite well. A Prim watch was one of the first I ever saw as a kid. There isn’t a person in Slovakia or Czechia that still doesn’t own or once owned a Prim watch. Before I spoke to the brand representatives, I told my wife the watch would disappear as fast as morning snow on a sunny day in Prague. I feel it in my bones when I see a good design and well, hats off to Prim – this is good design. Hence the quick sale did not come as a surprise to either of us. 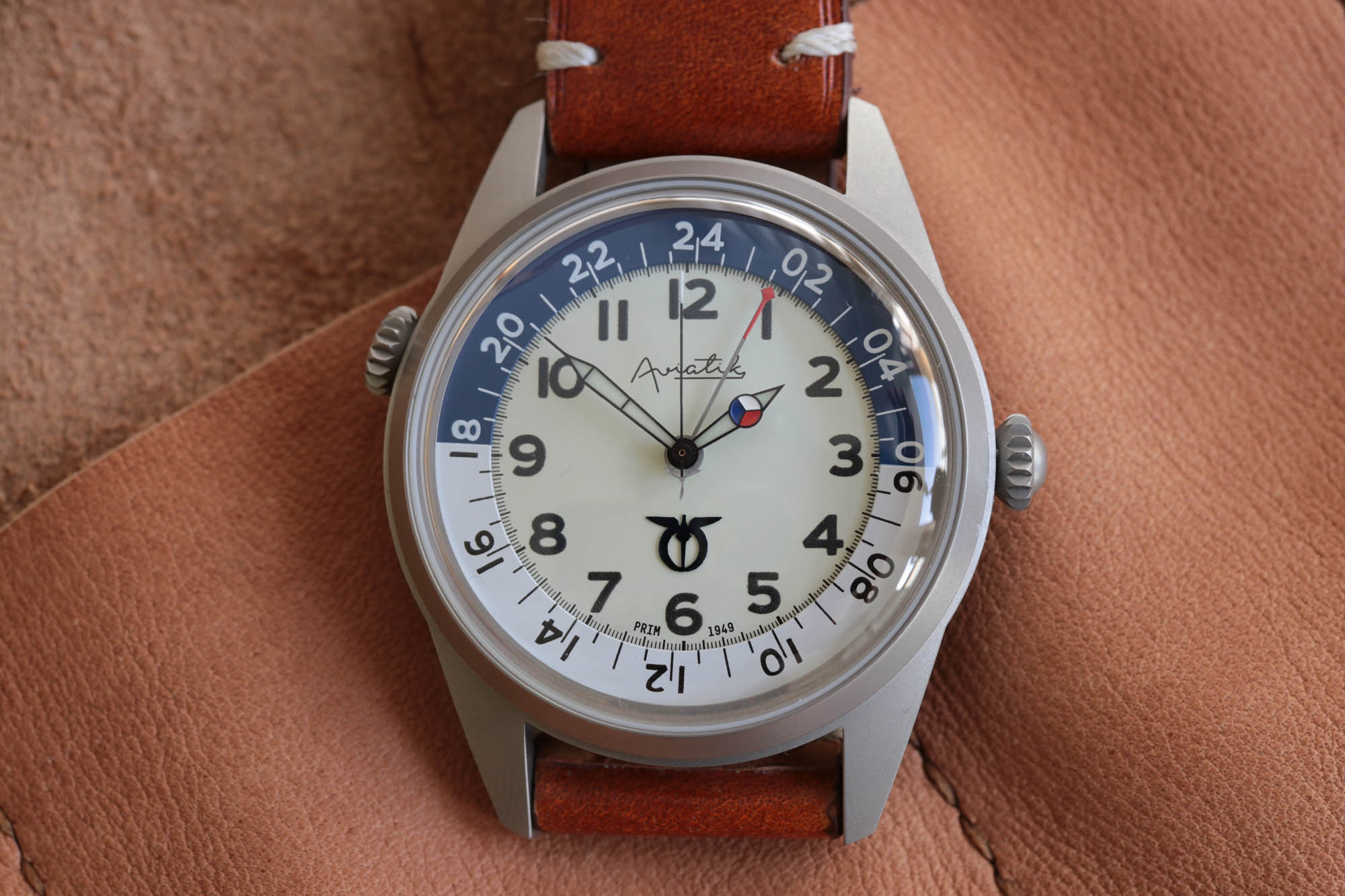 The design is at least as surprising as the 5.000 Euro price tag. If I were about to encapsulate the aura the Prim Aviatik creates, I would say the following: uncommon modern watch with a unique vintage character created via the gentle and original incorporation of local historical elements. Take the pilot badge introduced to the Czechoslovak army in 1923. It was implemented via a “Mercedes” hi-cream hour hand tip. Meisterstück. Non-violent, witty and uniquely nice. Studying the materials, colour tones, angling and playful curving guarantees some entertainment. So again. It is not just that the Prim guys found some old aeroplane, put its name on the dial and claimed a connection. 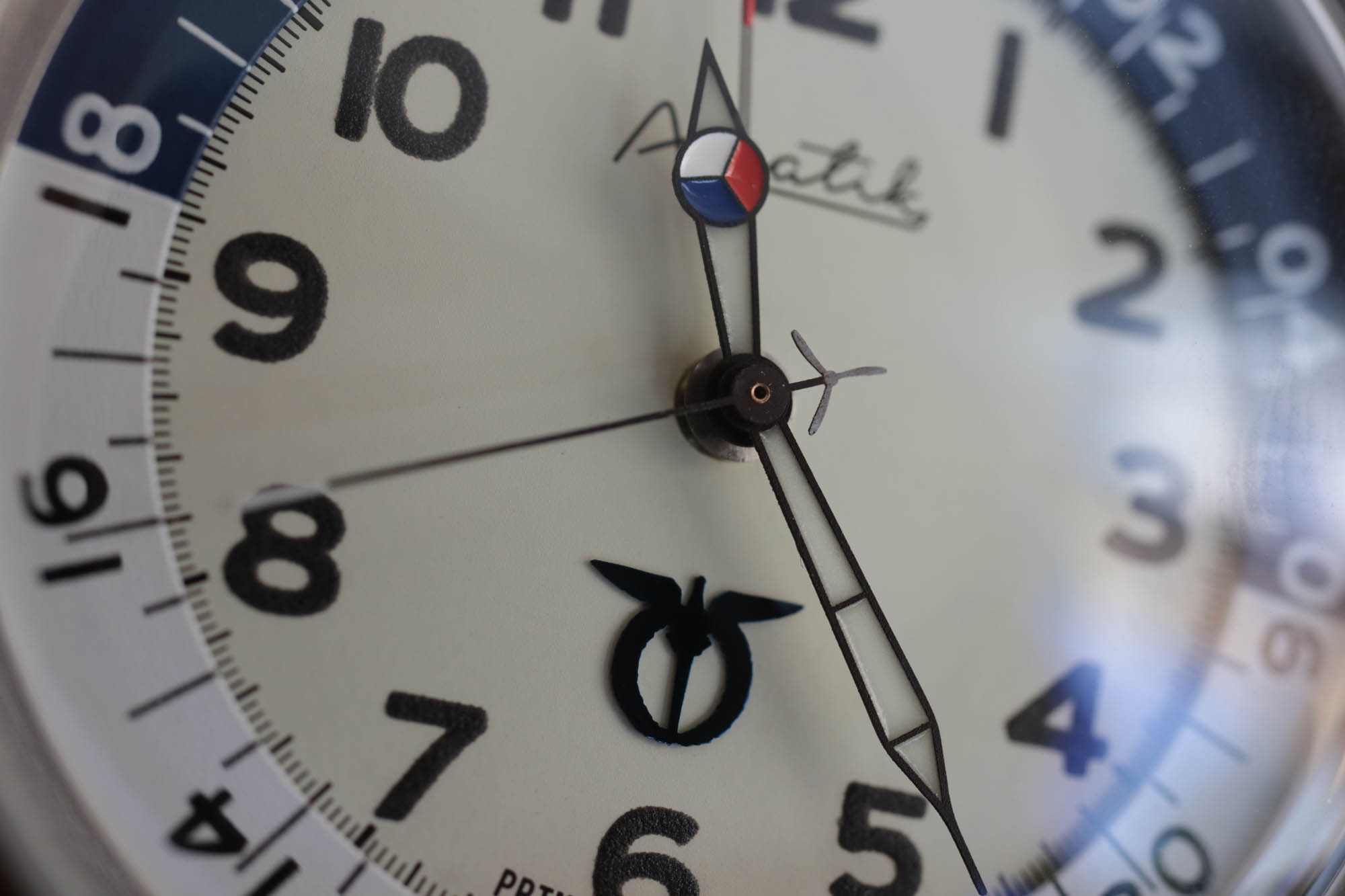 The reproduction of the badge is also part of the packaging, visible on an otherwise simple wooden box. Most importantly, though, you can find it on the dial, sitting right above the six. It was a bit of challenge to shoot it in a way that would showcase the vibrant, shiny blue colour that pops out at certain angles. 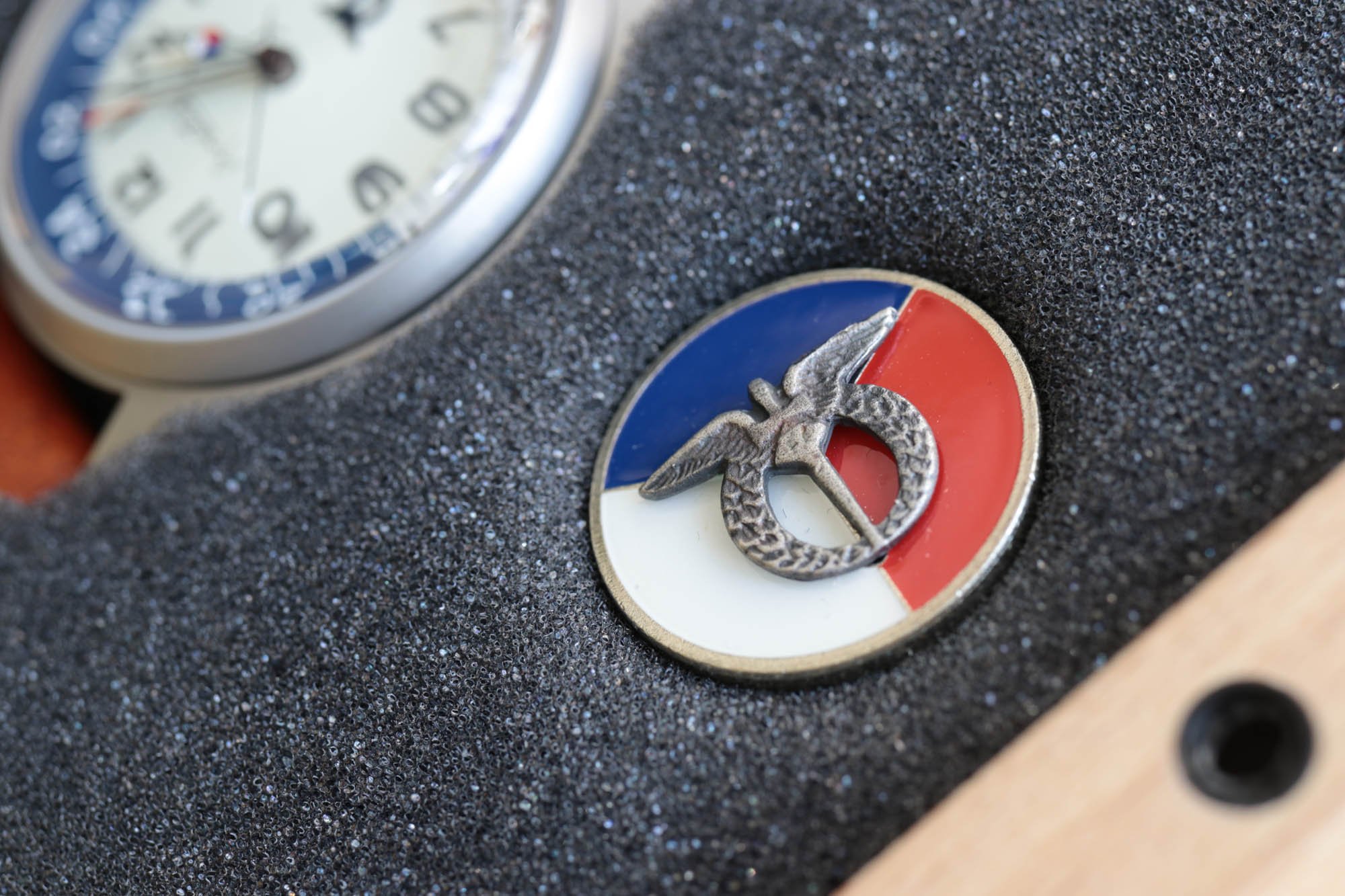 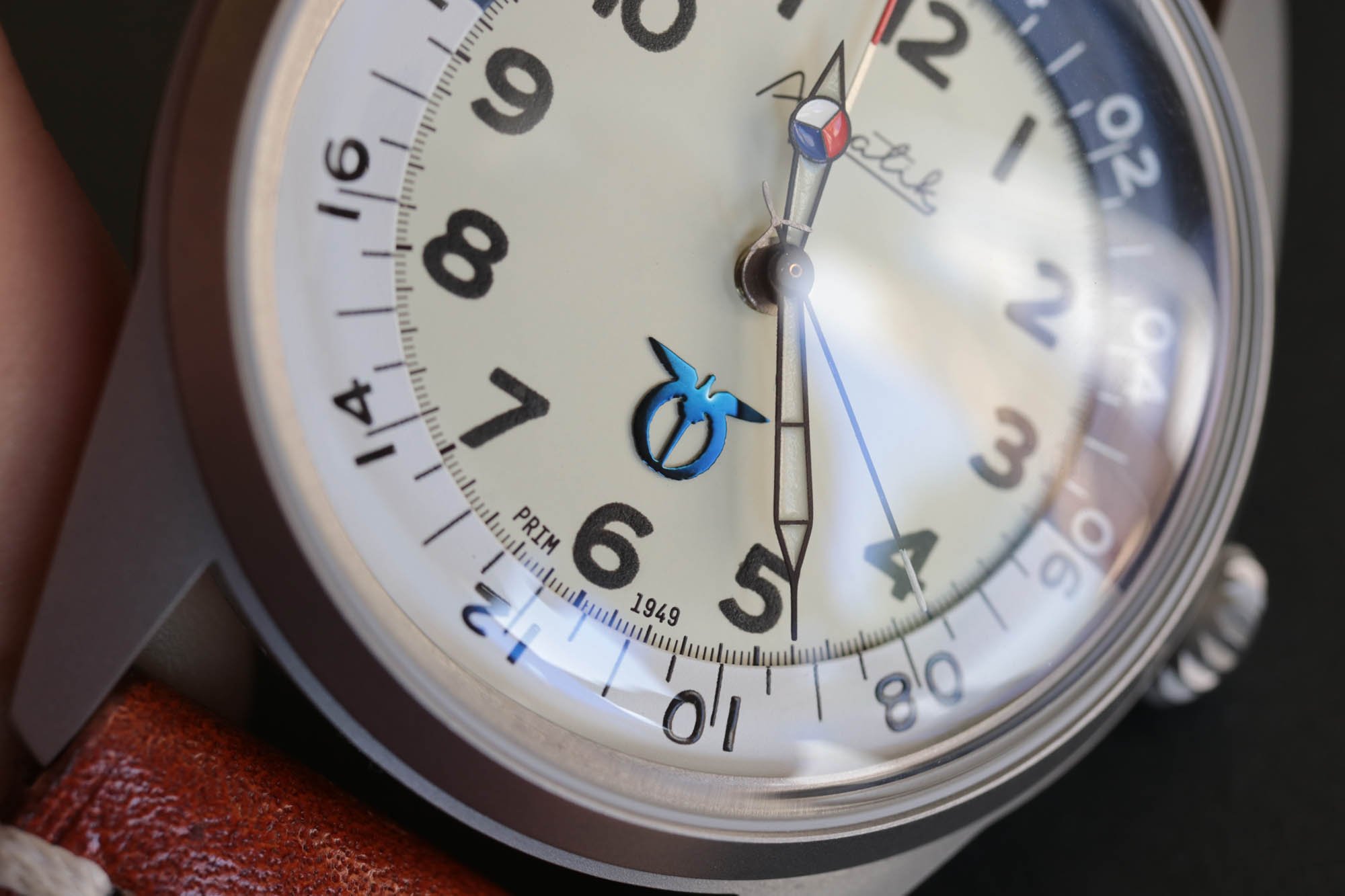 The ivory/cream white dial casts half the spell when being hypnotised by the frontal look. My original thought was that the what I’m seeing is just the background gazing through the thin skeleton hands. I was so wrong. You can find many academic disputes on the Internet dedicated to the topic of fake patina hands with every second vintage-inspired piece. Curious to see what they would say when looking at this piece. In my opinion, the luminous material colour selection and matching to the dial is perfect. And look at the moment the minute hand goes over the hour hand! The semi-transparent material creates a subtle visual effect with colourful depth. See in the video.

In full honesty, I have a couple of objections to the otherwise well-balanced dial. The printing quality of the central hour numbers could be much precise when looking at them under a magnifying glass. But this may be a prototype issue. As well as the disparity between the hands and hour numbers when shining a UV light on the dial. The third minor tweak I would tackle is the white tip of the central second hand that designers decided to coat in white. It was not necessary. The last detail I would object to is the three-armed propeller at the central hand. I was a bit confused, as the inspiration for the watch, the Letov S-2 aircraft only had a two-armed propeller. 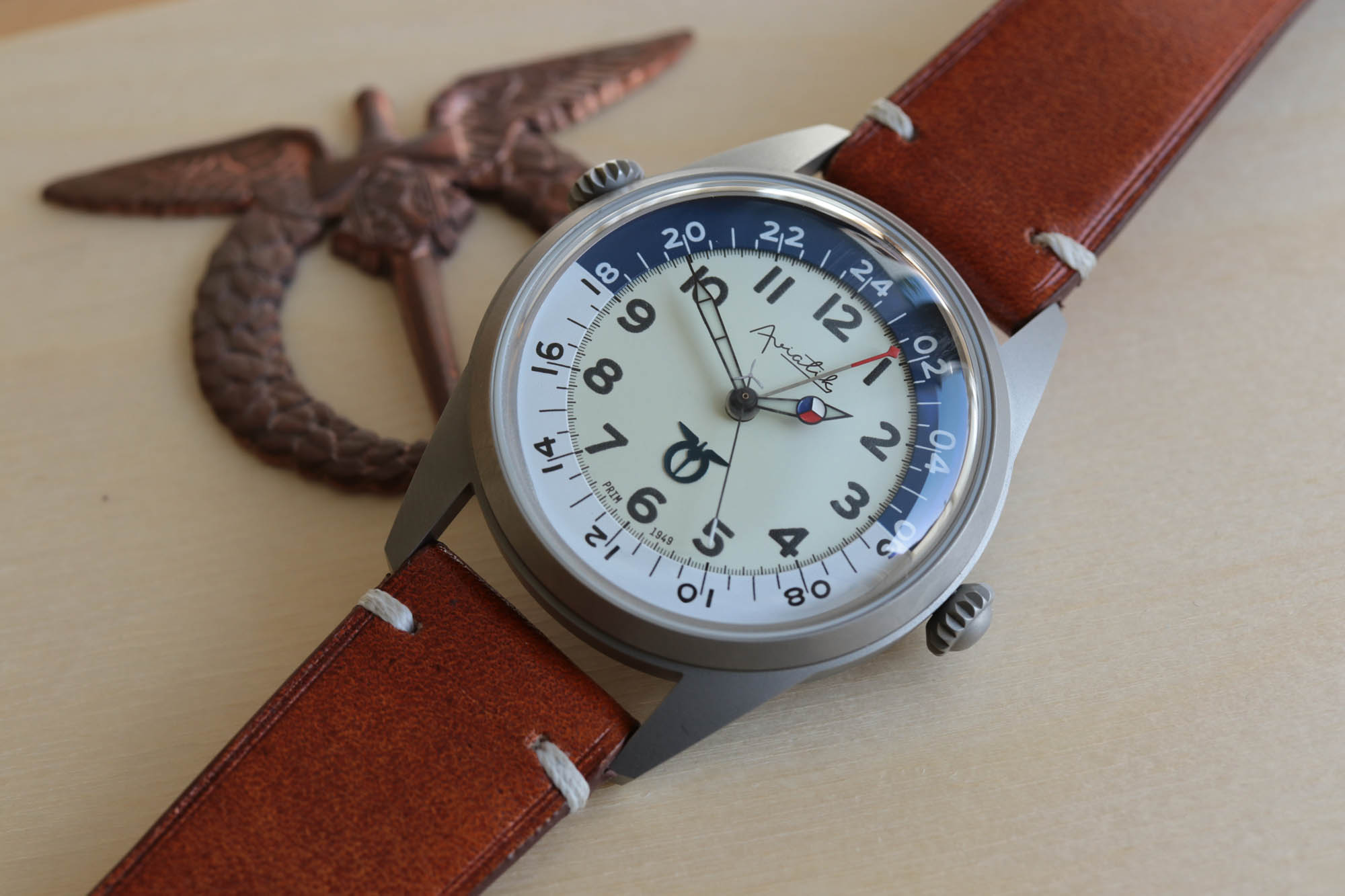 I told my wife the watch will disappear as fast as morning snow on a sunny day in Prague.

Case and case back

Selecting titanium for the casing was as an excellent choice to achieve a balanced look with the other vintage-inspired elements. The Prim Aviatik case protects a specially modified rhodium-plated mechanical caliber 93, first introduced in 2013. The entire watch development and movement modification of this new 93-1 caliber that consists of 121 parts took around a year. A shout out also goes to the non-transparent case back fixed with irregularly placed screws. A pure, but intense emotional anchor hides in the Czech inscription that translates into “The air is our sea”. It refers to the Czechoslovak aviation slogan used to promote aviation. The fame of Czechoslovak pilots spread well beyond the European borders for decades to come. 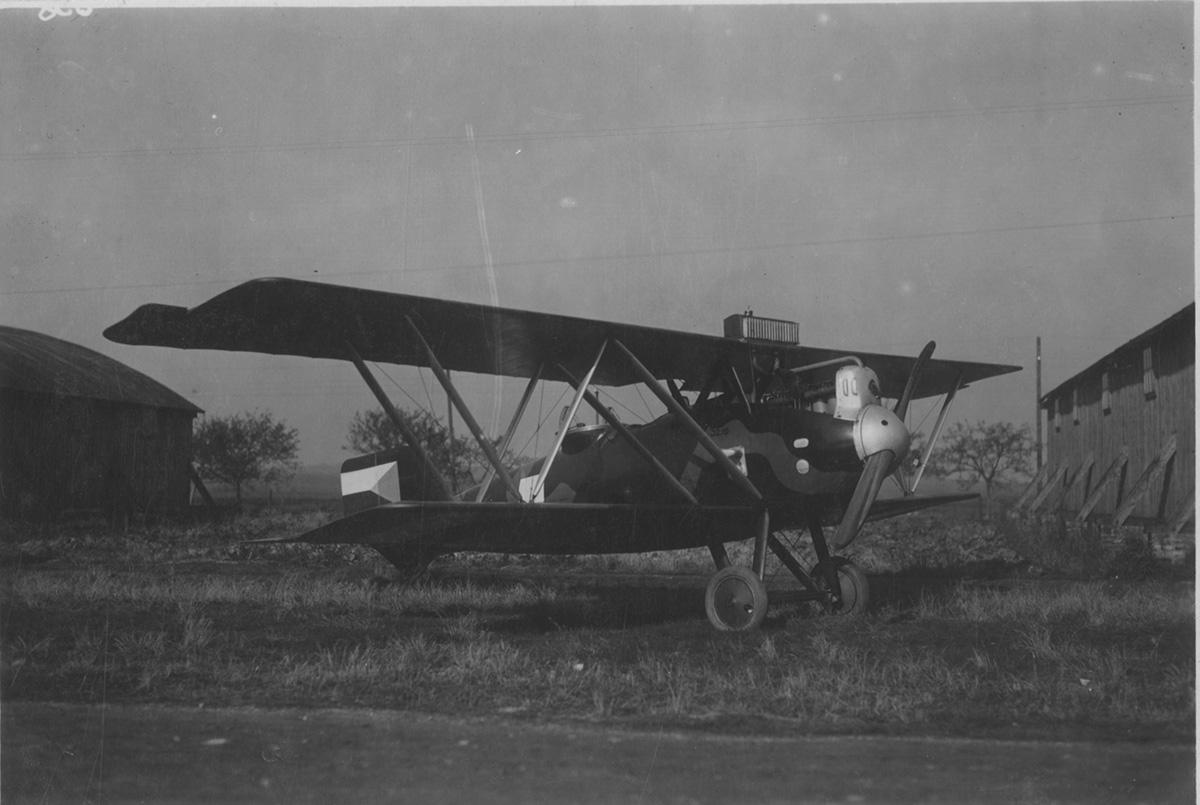 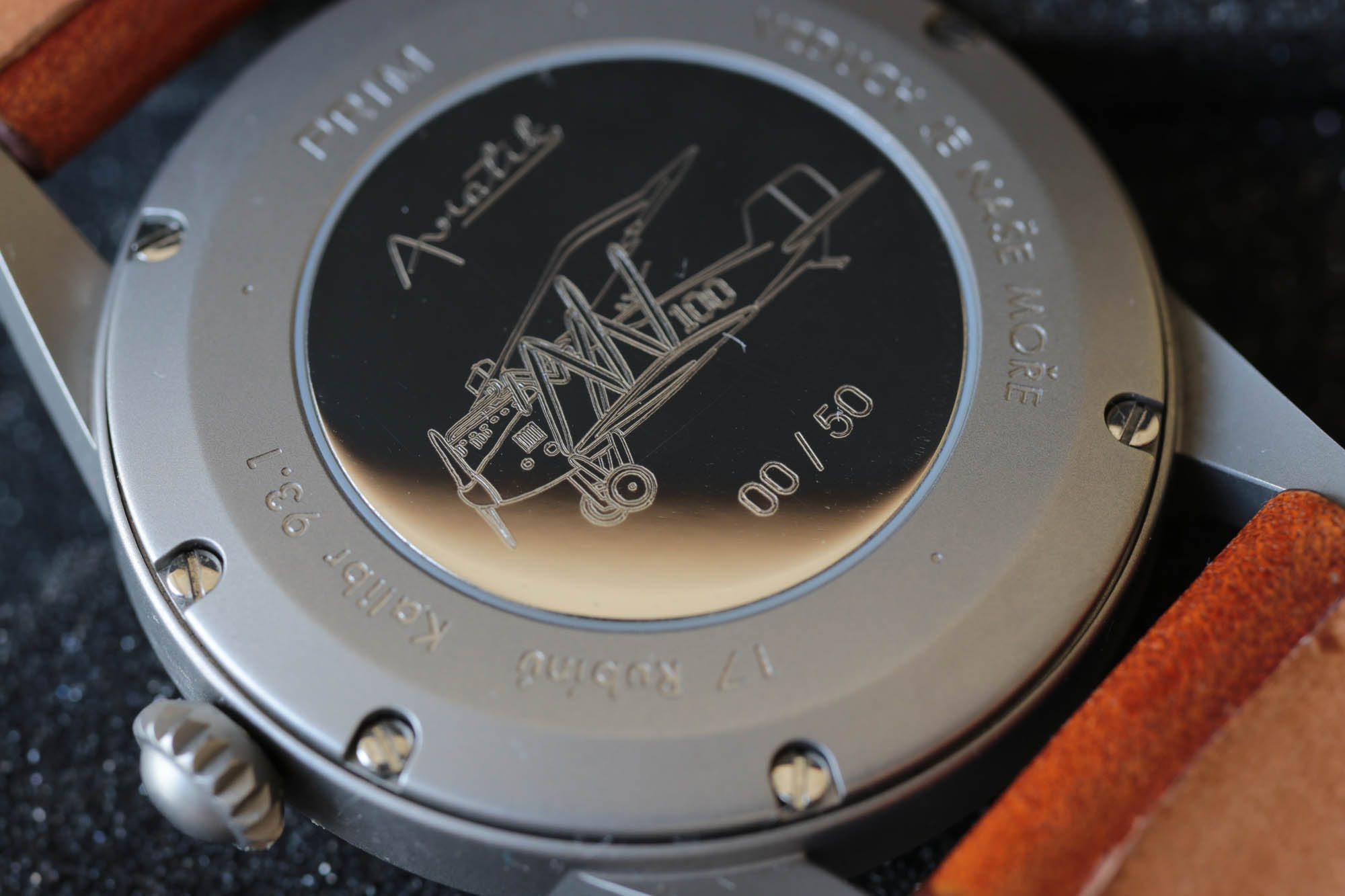 I wasn’t sure at first but after meeting the piece face to face, I quite like the out-of-the-box font selection for the vintage-inspired timepiece. I don’t, however, share the same enthusiasm for the 43mm diameter. Would it be 3mm smaller, I would be on the waiting list already. However, it has been a while since I last saw such honest and personal hand-work on a strap delivered without customisation. The cherry on the top of the strap styling is the dating and hand signature by the craftsman. Applause also for no big PRIM logo on the dial. If you’re looking for the brand, it sits decently at 6. The brand name is featured on the left side with 1949 on the right side of the six. 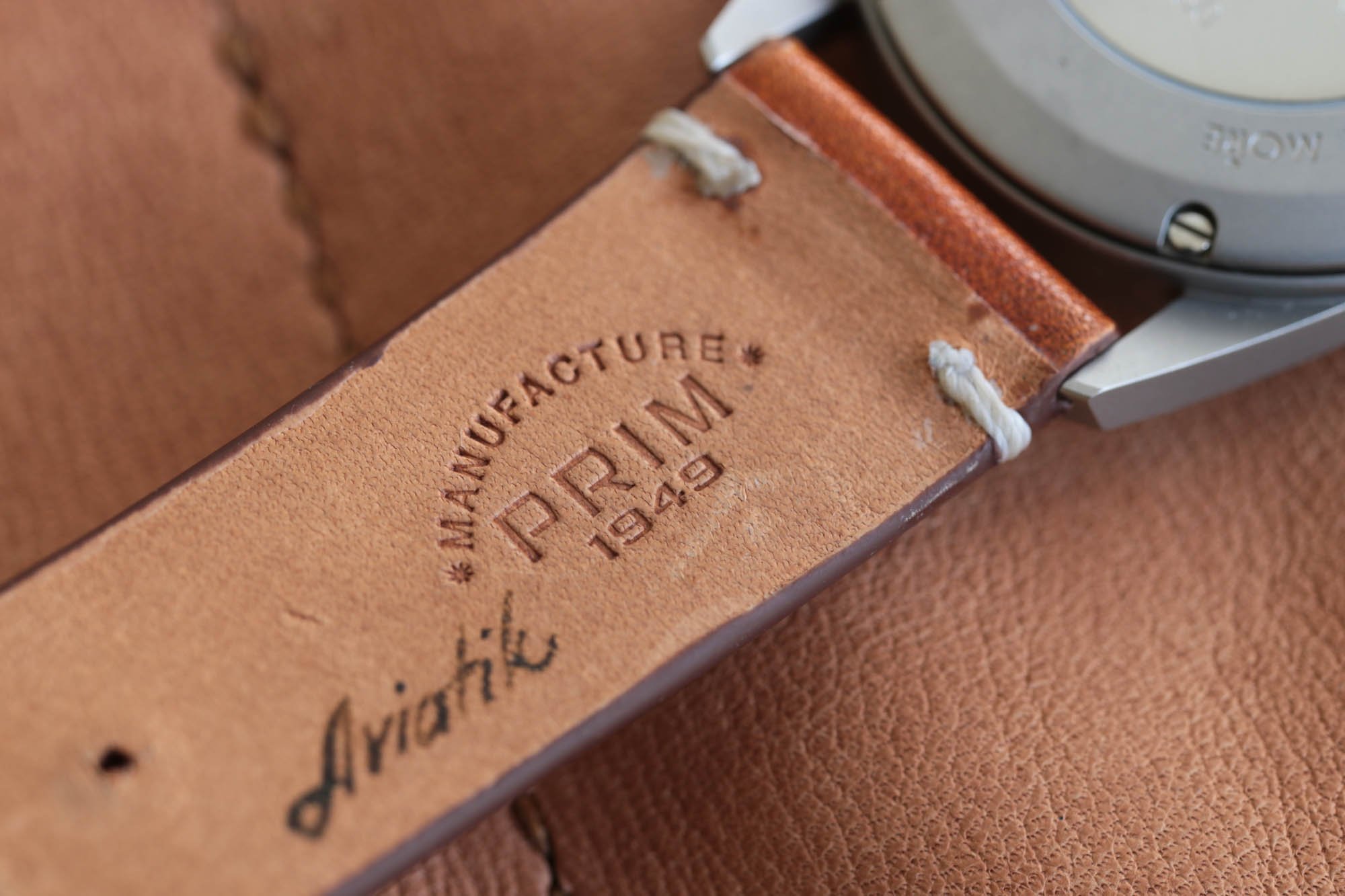 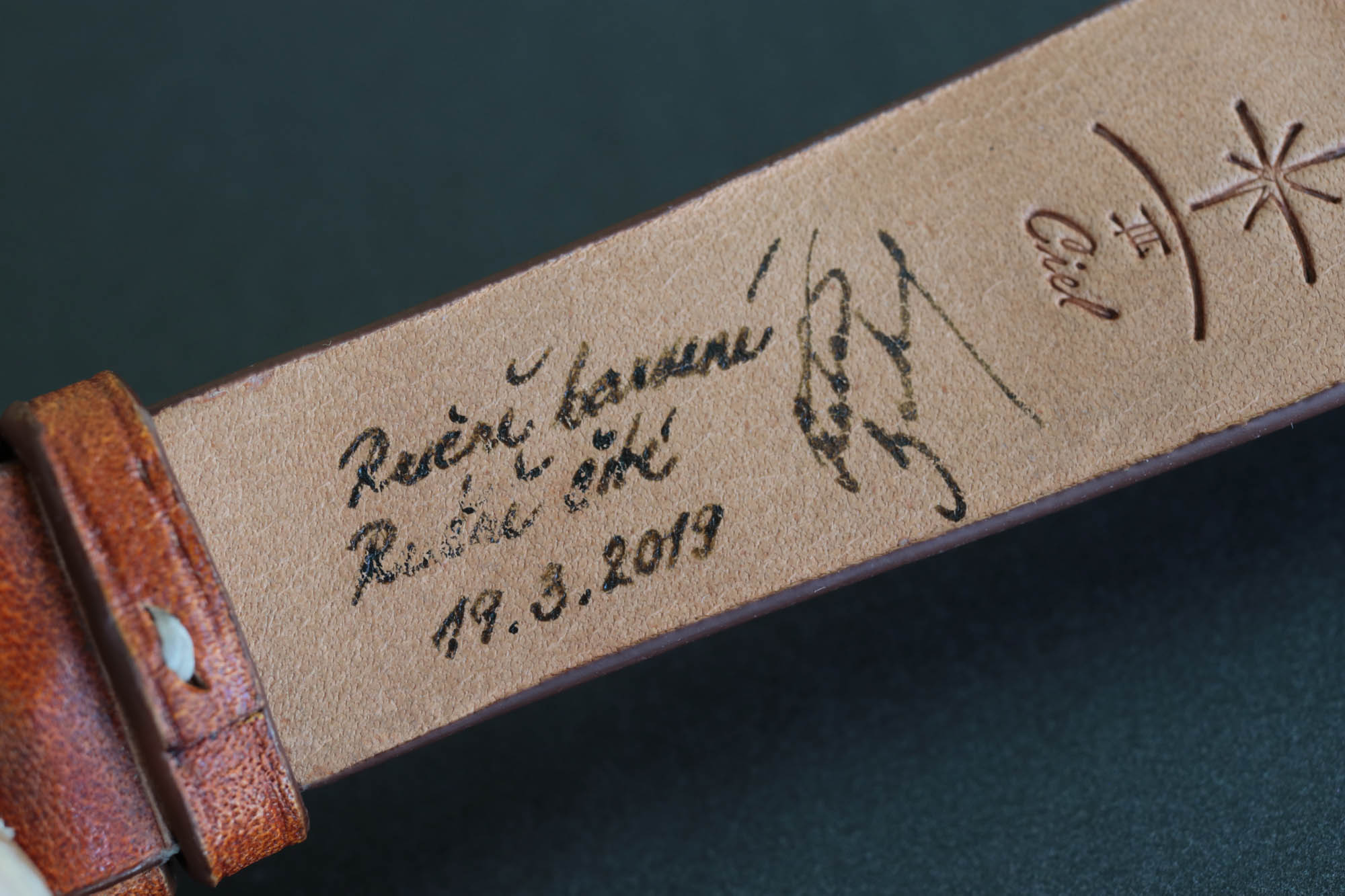 Prim Aviatik is miles away from generic designs you see in dozens, that’s for sure. It grabs attention in a moment’s notice, and I would guess it will either be an instant like or instant hate. The materials, colour and style balancing, non-traditional typo, robust – but gently incorporated links to Czechoslovak aviation and manual wound movement make for a unique watch with a strong individual character. Factoring in the limited run and local Czech manufacturing, it is a brilliant piece to add to your collection. That is if you find one available.

Hot Topics
Are You Still After An Omega × Swatch MoonSwatch?
112 comments
Introducing: The New Seamaster Professional 300M 60 Years Of Bond — With A Special Animated Case Back
110 comments
Introducing: The Oris Divers Sixty-Five Fratello Limited Edition
106 comments
It’s Time To Invest In A Dress Watch — Our Picks From Breguet, Omega, Grand Seiko, And More
75 comments
Rolex Is Going Certified Pre-Owned
68 comments
Popular
A Question From A Reader: “Which Modern Speedmaster Is Closest To The Original Moonwatch?”
Robert-Jan Broer
14
Grand Seiko SBGA211 ‘Snowflake’ And Why I Didn’t Buy It
Robert-Jan Broer
22
Two Patek Philippe Nautilus Watches: 3700/1A Versus 5711/1A
Robert-Jan Broer
16