Sometimes the love for a watch is as simple as a dial design or a set of colors. In my mind, the best example of that is the Rolex Daytona “Paul Newman”. These Daytona models sat on the shelves for years because Rolex clients clearly preferred the regular dials over their exotic counterparts. But we all know what happened with the appreciation for the “Paul Newman” dials in the decades after. But I’m not here to talk about that Daytona. Well, maybe I am a little bit. Because the influence these exotic dials had is clearly visible in the Audemars Piguet Royal Oak Chronograph ref. 26300ST. It proves that the exotic dials also work well with the iconic Royal Oak design. It’s a colorful sparkle that I miss in the current Royal Oak collection, and that is why I love to see it make a glorious return.

As I said in my opening statement, sometimes the love for a watch is as simple as a set of colors. And when it comes to this particular watch, that’s the heart of the matter. Of course, there is a huge love and appreciation for the Royal Oak, its design, and how the brand managed to create a great chronograph based on Gérald Genta’s initial concept. But in reality, the colors used for this specific version are the story of this watch. So let’s jump into the Audemars Piguet Royal Oak Chronograph ref. 26300ST and why I think it should make a return to the current Royal Oak collection. 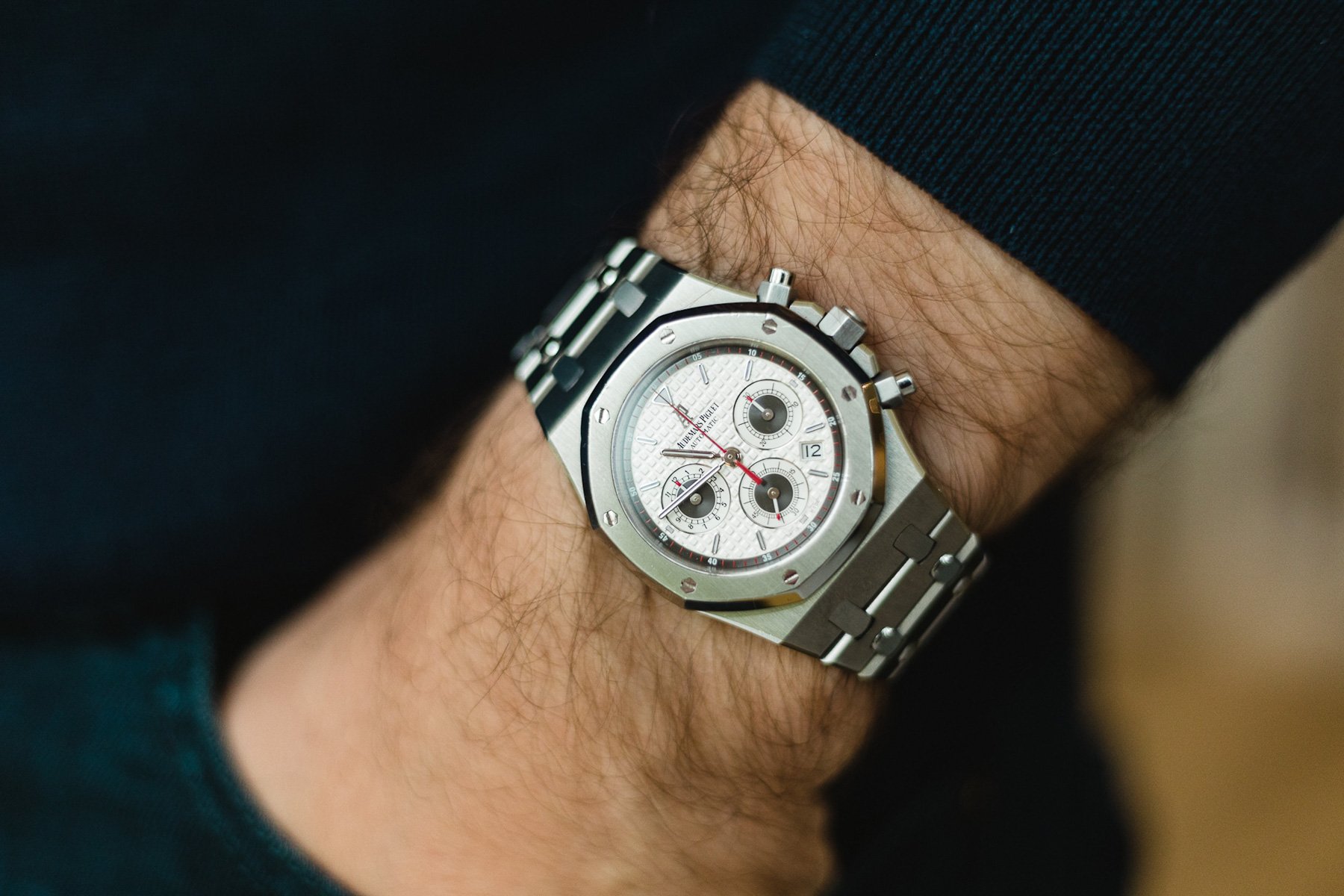 Though some might have already forgotten, at the beginning of this year, Audemars Piguet introduced its new Royal Oak collection to celebrate the iconic watch’s 50th anniversary. And it was released to much critical acclaim, I might add. Unfortunately, it also feels like the excitement died down quickly, but what we got was impressive nonetheless. The new movements that were developed and produced in-house are a great step for the new generation of Royal Oaks. And overall, the new generation feels like it has a bit more energy, as Robert-Jan explained in his introduction article. Personally, I love seeing the Royal Oak in its purest form, so the Royal Oak “Jumbo” will always be my go-to model. Just as Genta intended it to be. 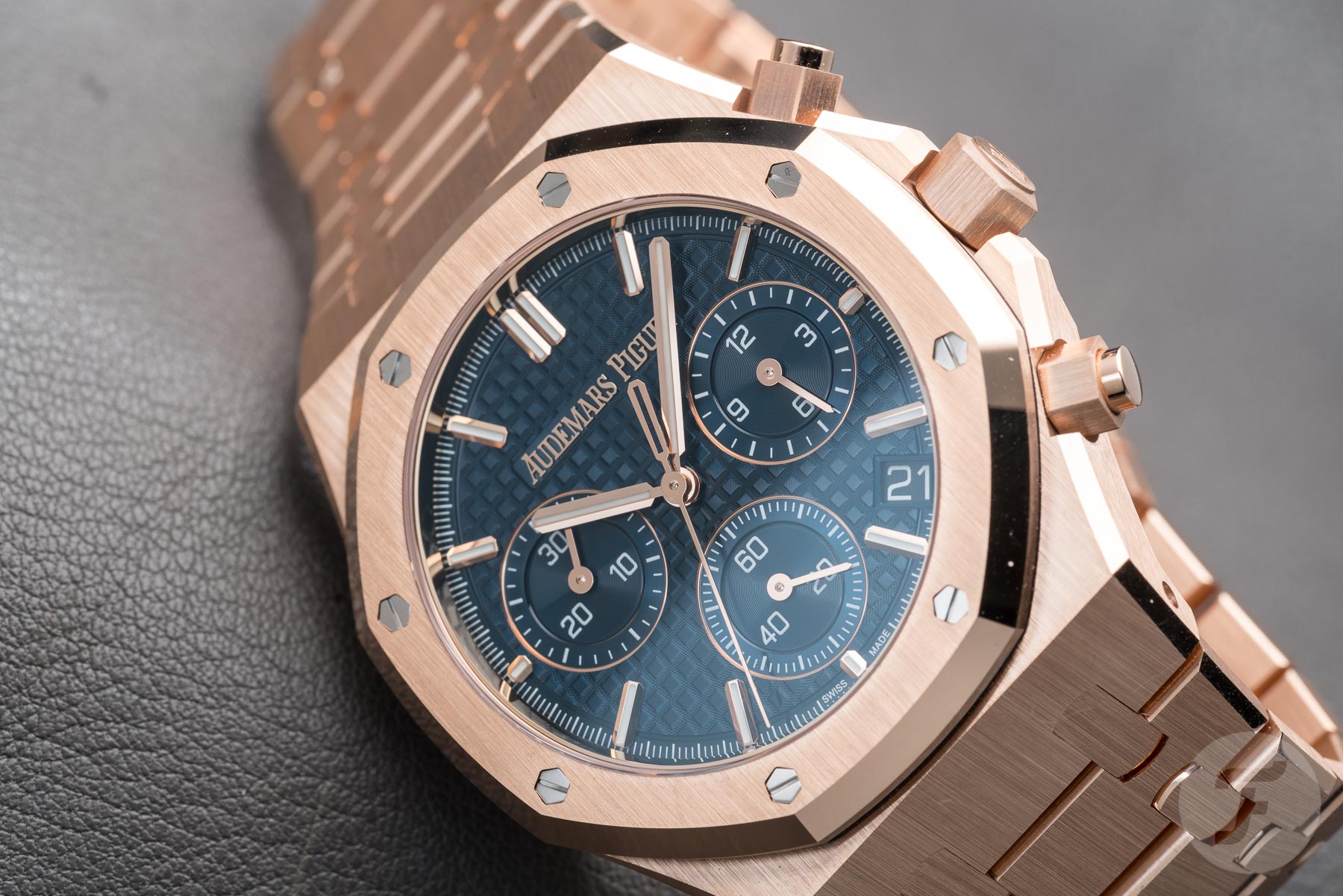 But that’s not to say that I don’t like any of the other Royal Oak models. Over the years, I have found a great appreciation time and again for the Royal Oak Chronograph as well. But when I look at the current Royal Oak Chronograph models, I miss two things that made some of the older ones so captivating. The first is a 39mm case size. Currently, Audemars Piguet offers the 50th Anniversary model in 41mm and a smaller 38mm model. While I perfectly understand the commercial choice to offer two different sizes, the original 39mm chronograph was the perfect size. It stuck to the original Genta-designed case diameter that made it ideal for a variety of wrist sizes. On top of that, we have seen dial designs that were more exciting than those used for the current offerings. That is what inspired me to look at some of the options from the past. 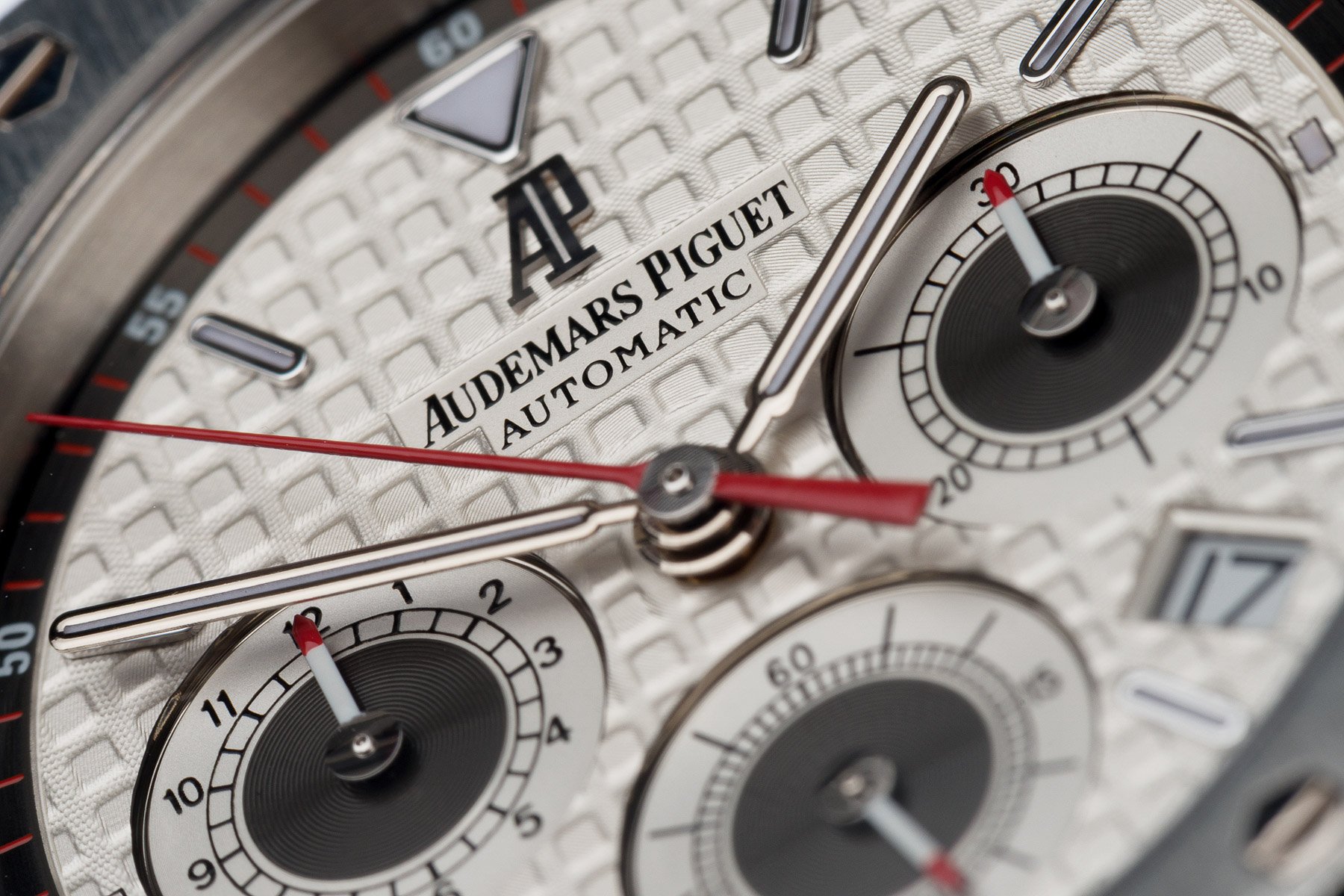 The legacy of the Audemars Piguet Royal Oak Chronograph

Or, I should say, one option in particular. There is one Royal Oak Chronograph that has always stood out to me. Its colors play a crucial part in my love for it, but they also perfectly show how good of a design the Royal Chronograph is.

Audemars Piguet introduced the chronograph version of the Royal Oak in 1997 on the 25th anniversary of the iconic watch. As I explained in one of the Buying Guide articles, it’s a weird realization that the Royal Oak Offshore was actually the first Royal Oak chronograph. 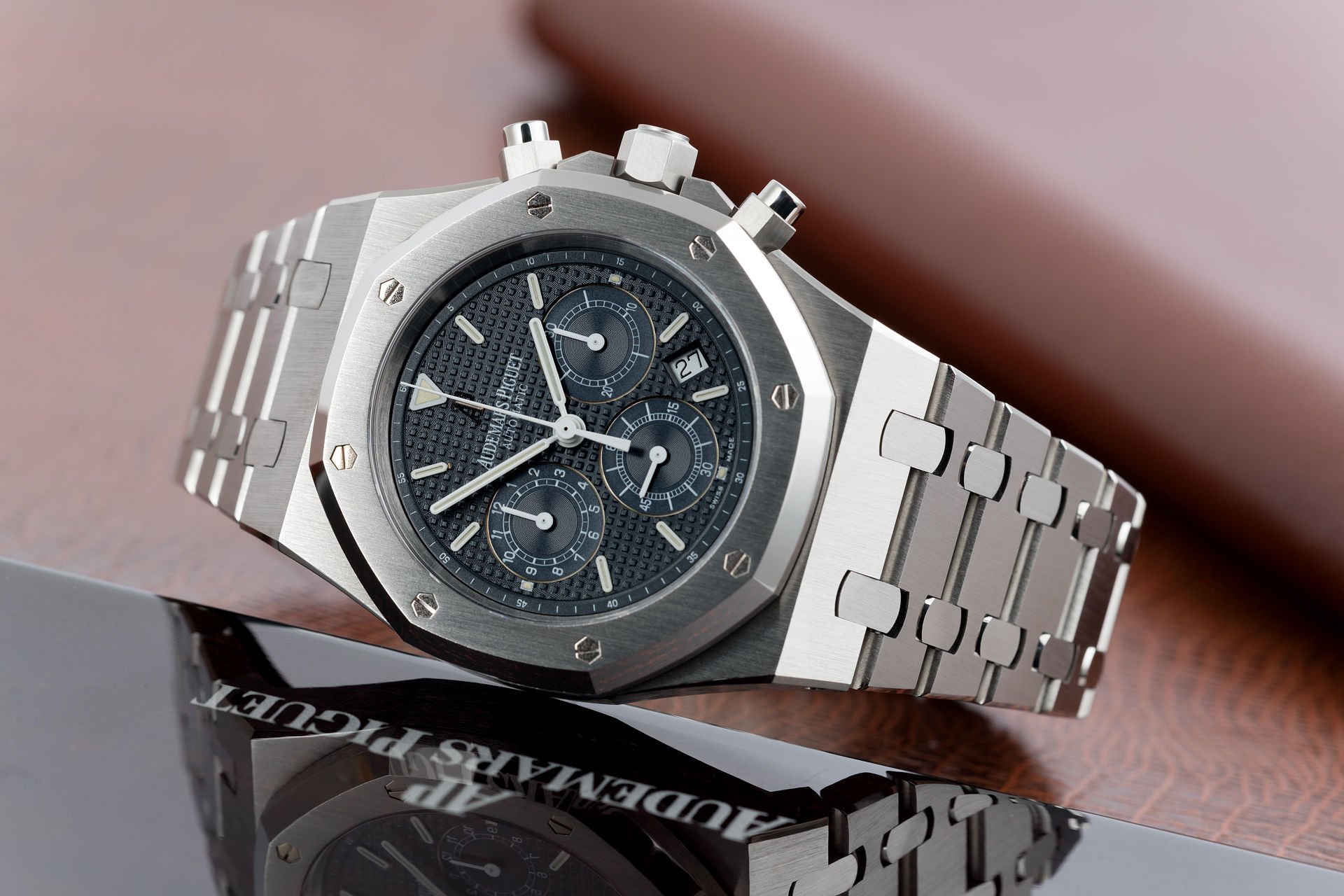 But the reference 25960ST demonstrated why the Royal Oak “Jumbo” was the perfect watch to be transformed into a chronograph. AP’s designers remained faithful to the original 39mm diameter and also managed to maintain the slim profile of the time-and-date version. It feels like the perfect evolution of the regular Royal Oak. What stands out most is how balanced the overall design feels. The dial layout is perfectly symmetrical, and the sub-dials fit in like they were meant to be there all along. It just feels expertly proportioned. 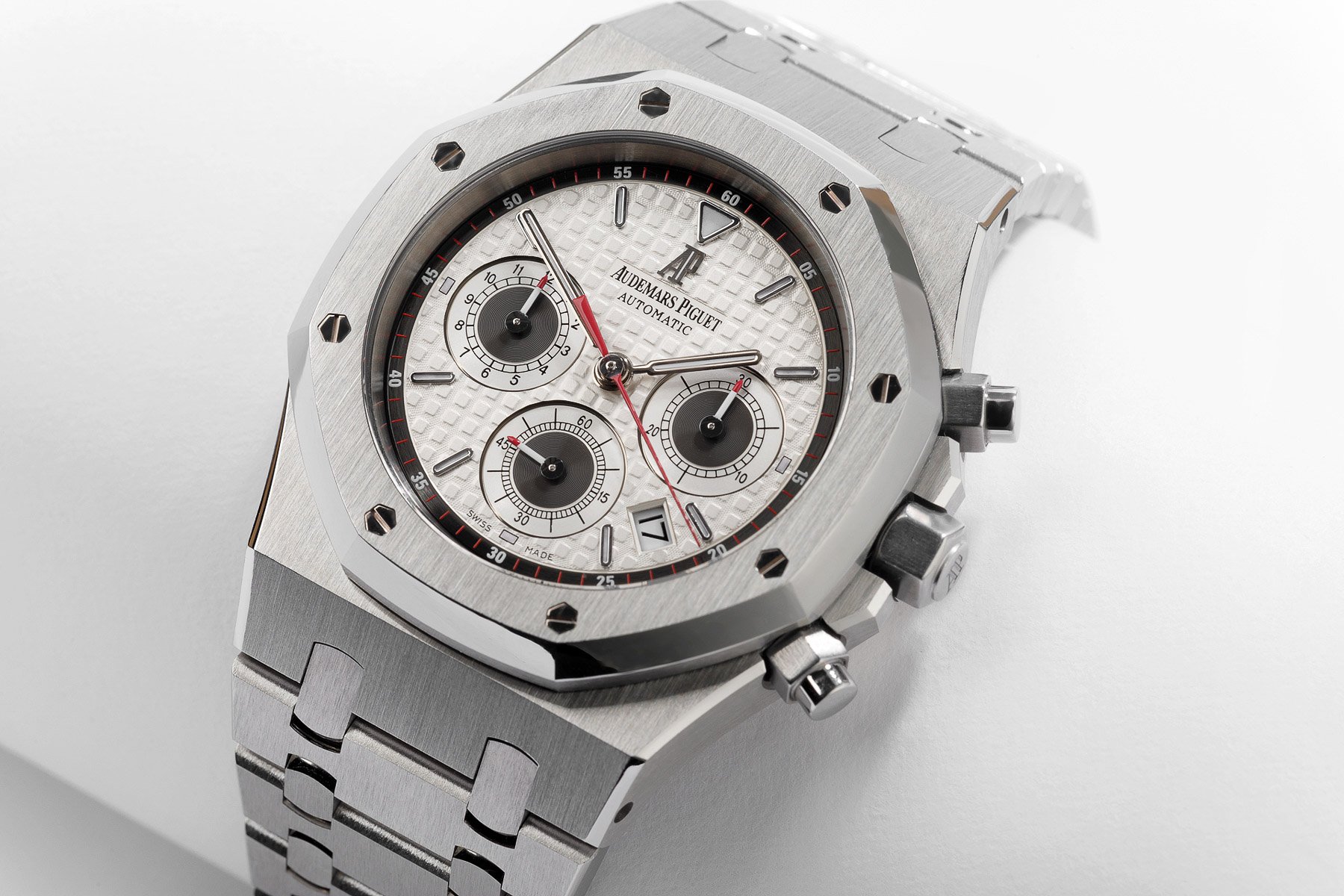 But the first generation of the Royal Oak Chronograph also had its flaws. The biggest was that the iconic screws in the bezel were merely there for show. They did not keep the bezel in place by affixing it to the case. Thankfully, that was corrected by its successor, the Royal Oak Chronograph 26300ST that I love so much. But this reference also introduced a series of colorful dials that showed the versatility of the Royal Oak’s very technical design. Indeed, the Royal Oak could look as good with a lively multi-colored dial as it did with a classic monochrome one. 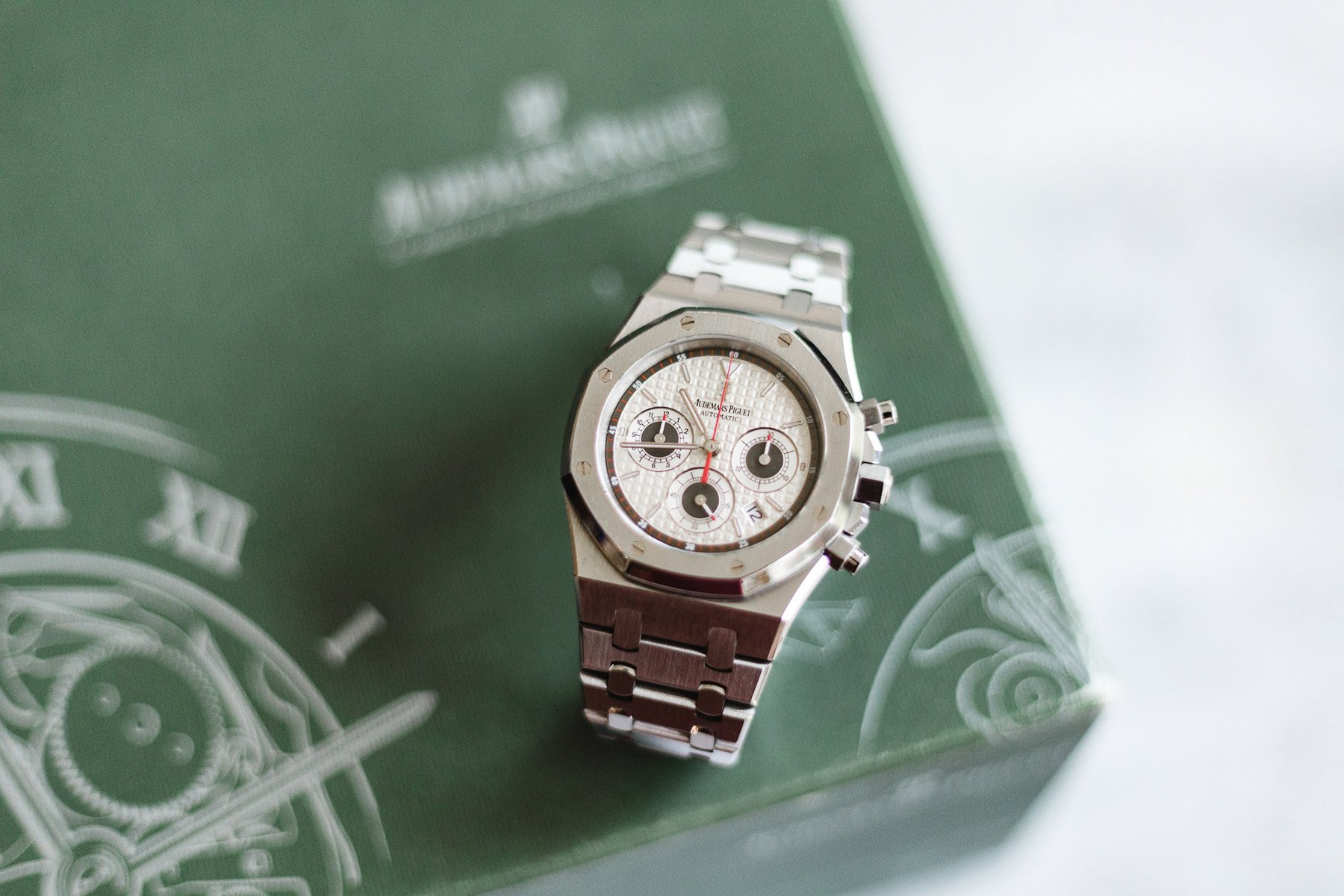 While there were other dial options that looked great, this silver dial with black and red elements takes the grand prize. Clearly inspired by the colors and design of the Rolex Daytona “Paul Newman”, this version added a colorful frivolity to the Royal Oak that I absolutely adore. Fratello’s Robert-Jan owned one of these watches, so I had the pleasure of checking it out up close numerous times. But besides being a great watch “under the lens”, what I remember most is how good it looked on Robert-Jan’s wrist (or anyone’s wrist, for that matter). The iconic shapes of the Royal Oak in combination with the remarkable colors created something new and exciting that I hadn’t seen before and haven’t seen in the Royal Oak collection since. 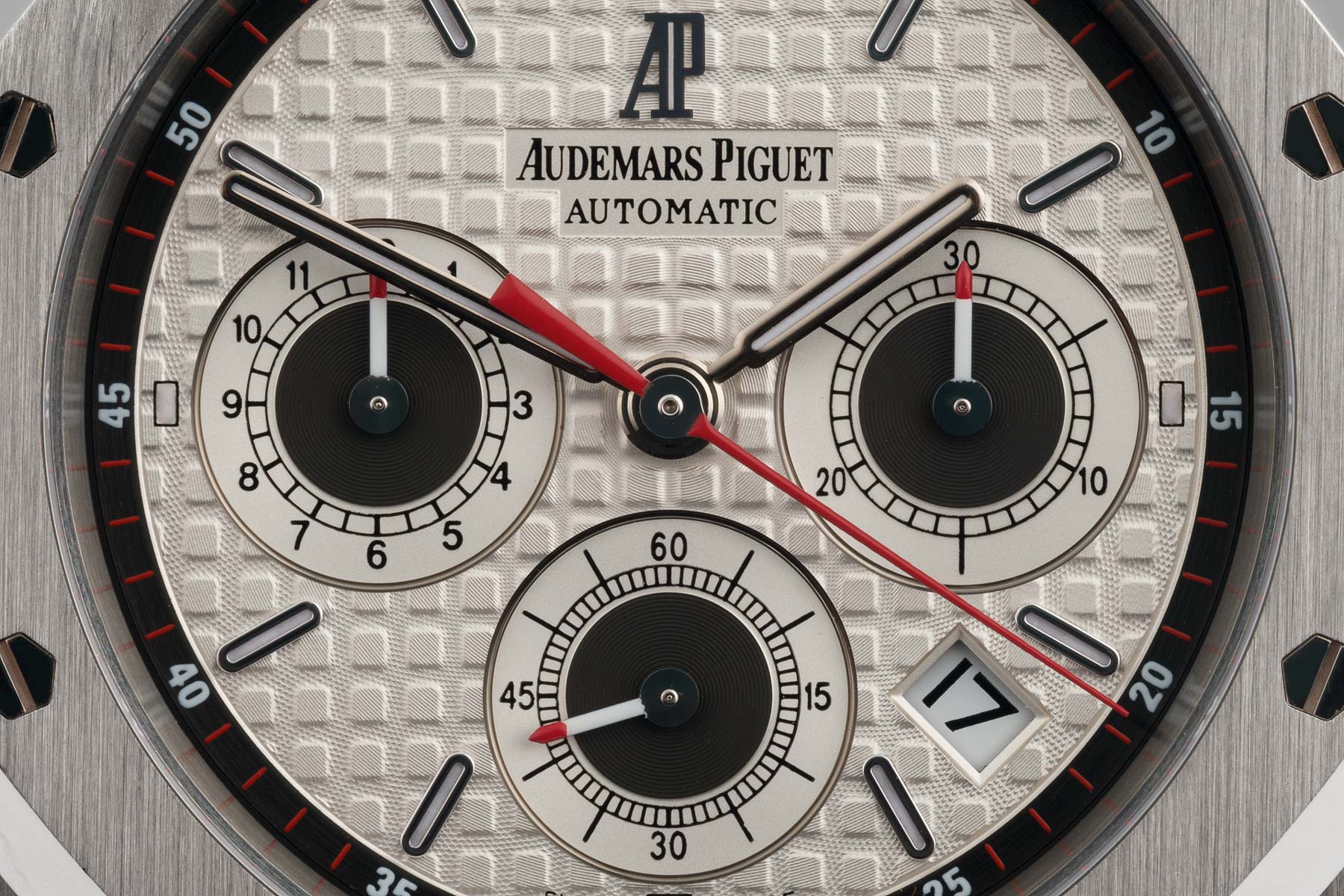 The perfect proportions of the Royal Oak 26300ST

An important part of my appreciation comes from the watch’s ideal proportions. And I don’t just mean the case and bracelet. No, the whole watch, including the dial, registers, and hands. The watch respects the original 39mm case size, and it is 11mm thick and 49.5mm from lug to lug. The case construction restores the original function of the screws in the bezel. It’s an element crucial to the design and one that should always be part of it. The dial feels perfectly balanced, with all the elements placed in perfect harmony. It results in a dial that is very easy to read and looks amazing. 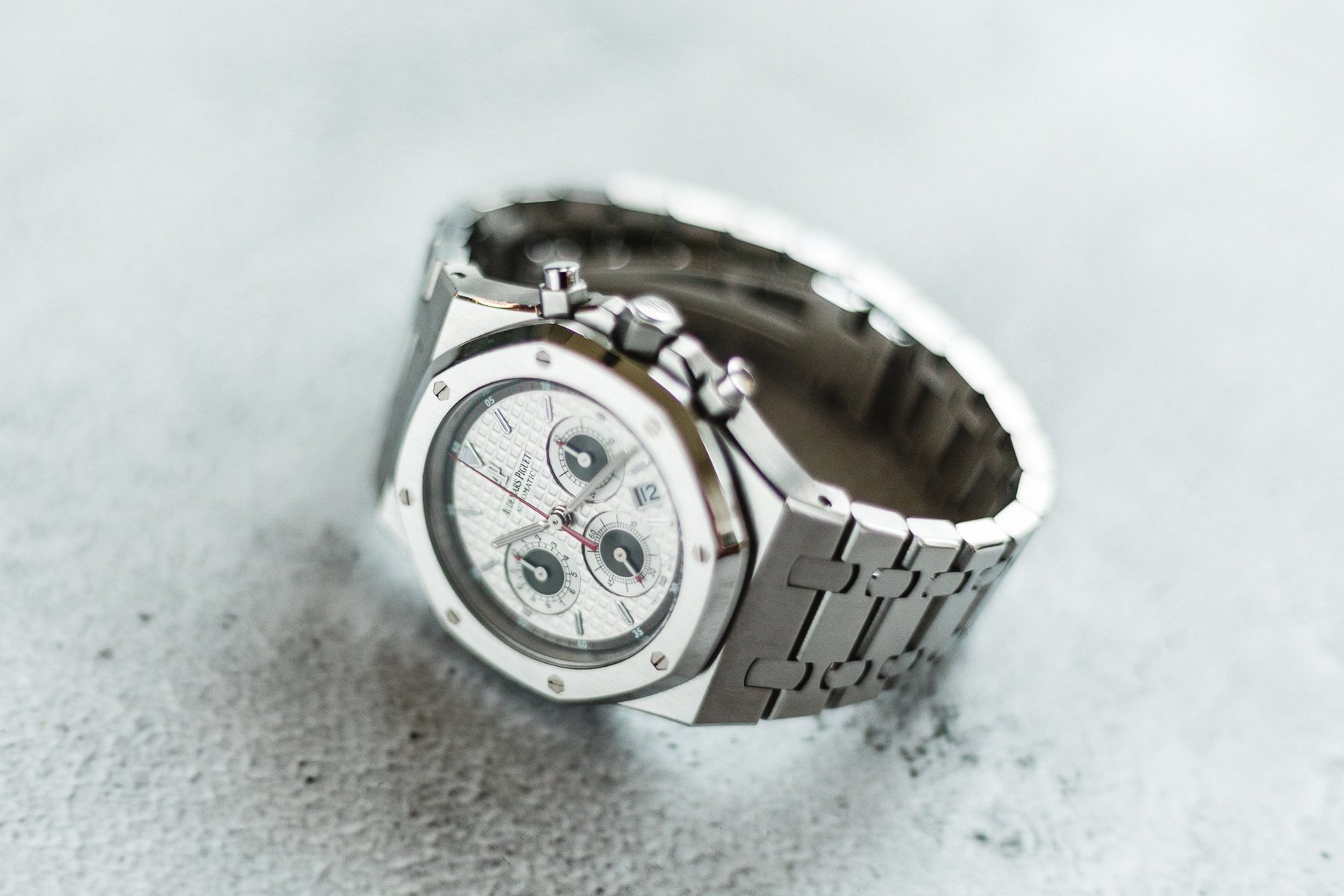 If you zoom in on the dial, you see that the designers managed to integrate the red and black colors perfectly. The watch featured a beautiful silver dial and a black outer ring with red minute markers and white printed numerals for every five minutes. The sub-dials are another thing of great beauty with their white bases and black center portions. Add the small white hands with their high-polished bases and red tips, as well as the red central chronograph hand, and you have proof of how delicately balanced this dial is. 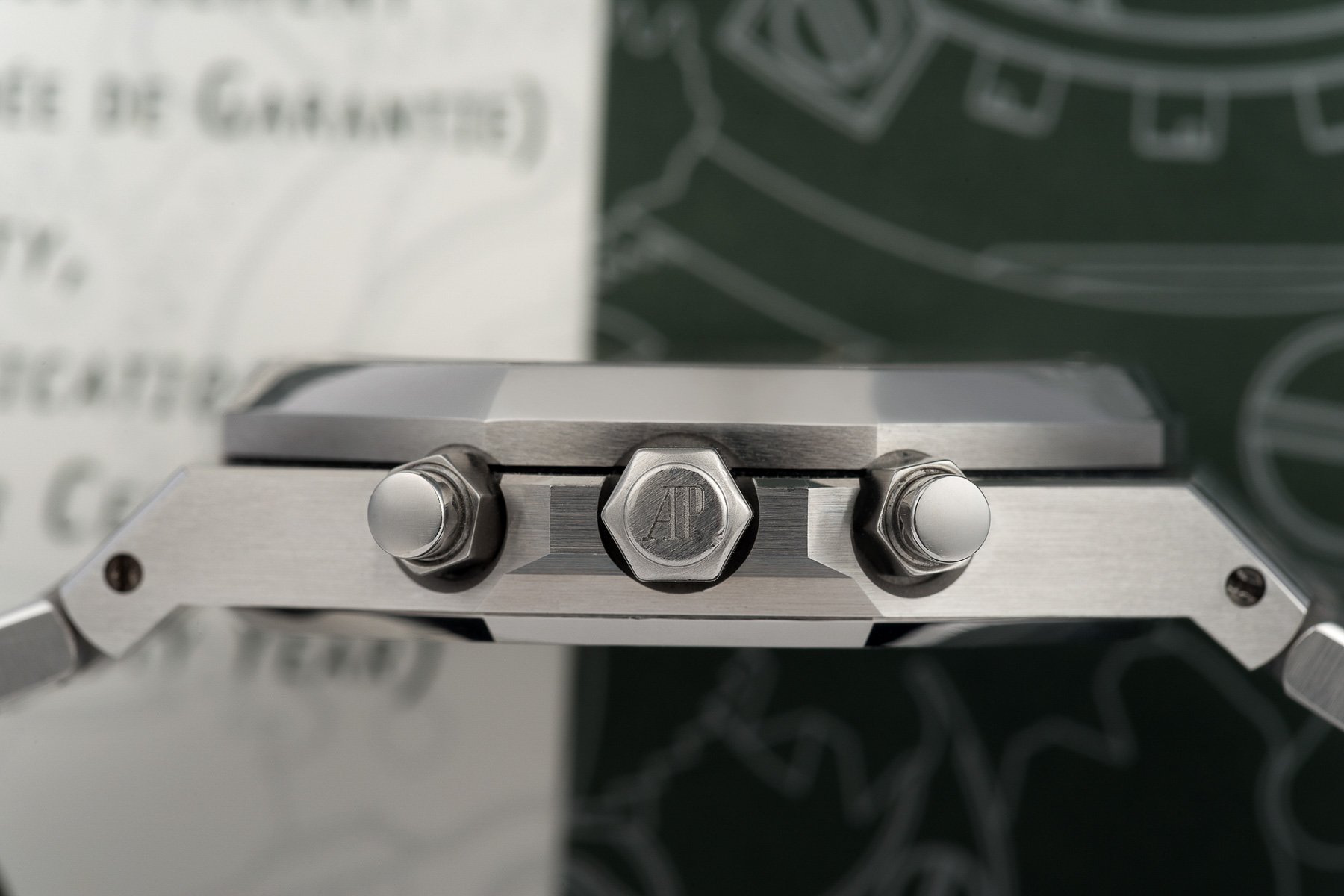 Inside the case, Audemars Piguet equipped the watch with the AP caliber 2385. This automatic chronograph movement is just 5.5mm thick and based on the F. Piguet caliber 1185. It operates at 21,600vph and has a 40-hour power reserve. It features a date window between 4 and 5 o’clock and has an 18K gold oscillating weight. Because of the slim profile of the movement, Audemars Piguet could keep the total height of the case limited to just 11mm. 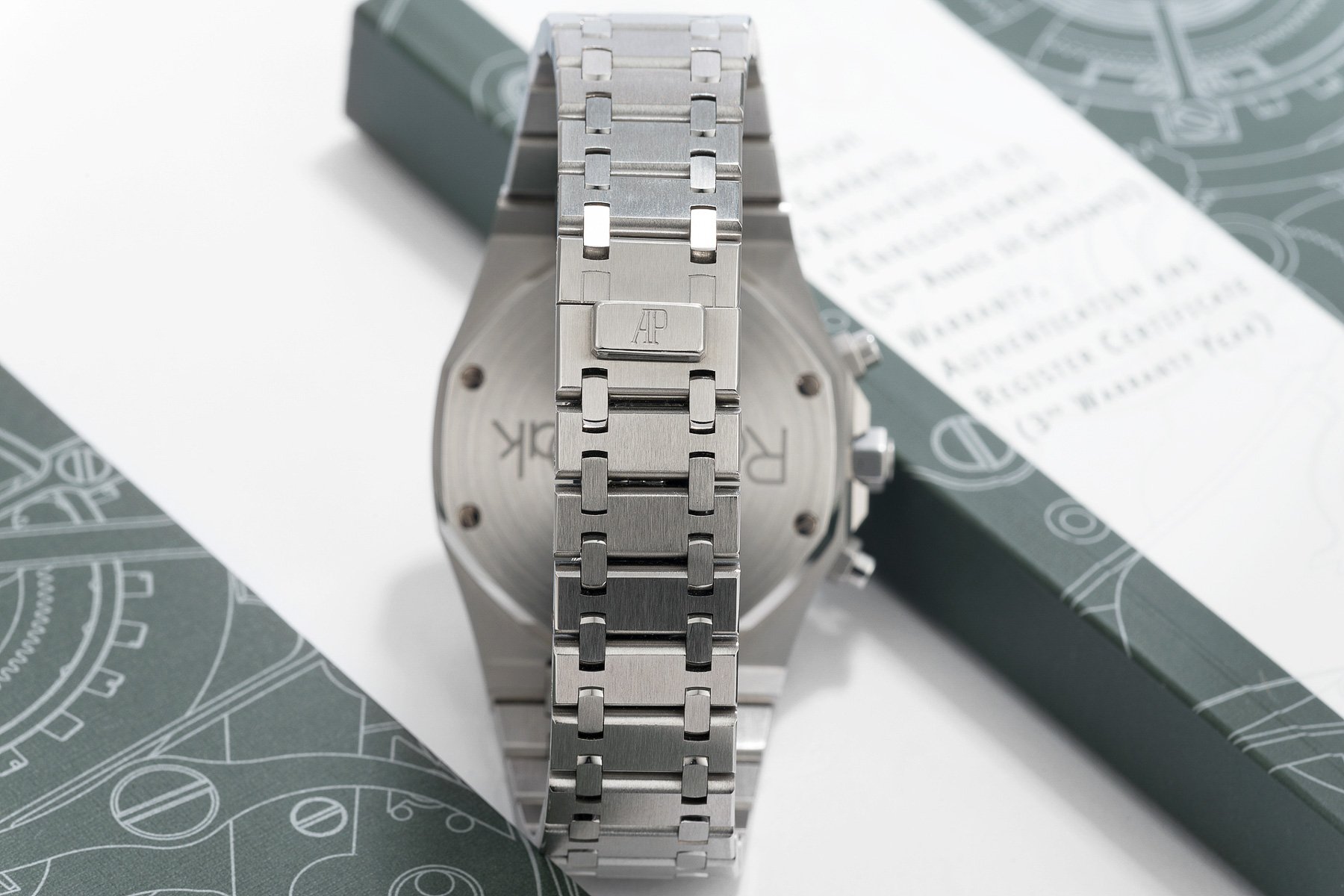 Add the brilliant bracelet and this stunning dial design, and you get the perfect Audemars Piguet Royal Oak Chronograph. The ref. 26300ST was produced from 2008 until 2012 when it was replaced with a 41mm successor. Unfortunately, with the larger dimensions, we lost the chronograph that honored the original size of Genta’s iconic Royal Oak. As you might know, the Royal Oak wears rather large due to its integrated bracelet and technical presence. As such, a 41mm case makes for a substantial difference. 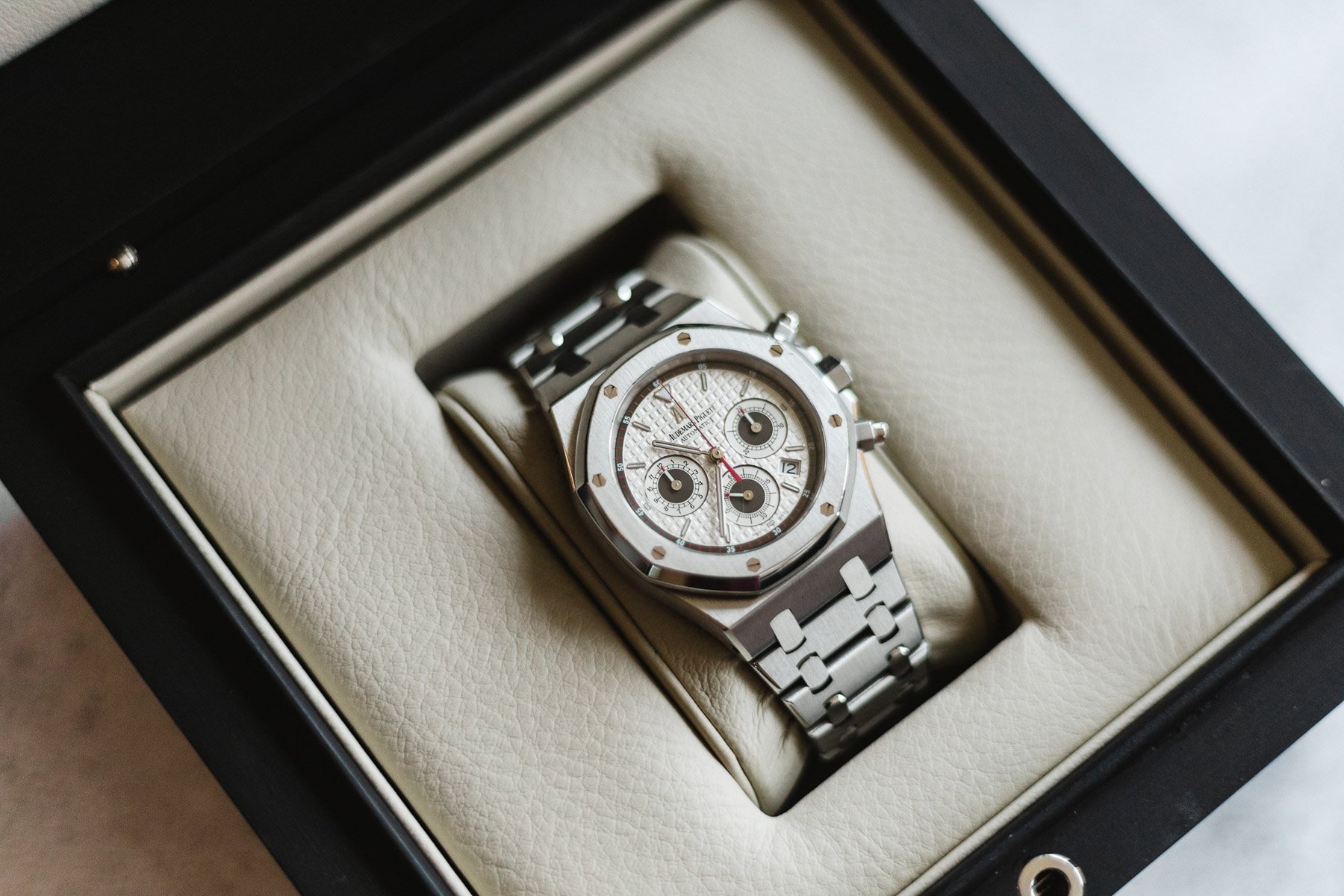 I welcome the return of multi-colored dials