Dear Zenith, Bring Back The Brilliant A277 Diving Chronograph

During the writing of the Buying Guide series, I found out about so many great watches that we don’t talk about often enough. One brand that stood out along the way was Zenith. The brand has created so many fantastic watches that would it be great to see more of them return in the form of modern re-issues. Obviously, most of Zenith’s stand-out timepieces are chronographs. With a rich history in chronographs overall and especially with the El Primero movement, the brand has always been a leader in the genre. One of the most beautiful examples, in my opinion, is the A277. This watch, which hails from the 1960s, is a perfect example of a diving chronograph done well. And now, it’s time for its glorious return.

When writing this series of articles, we are very much aware that most of the watches will probably not return any time soon. But it is great to see when brands embrace their past and re-issue their classics. Breitling is a very good example of a brand that has successfully reintroduced some of its greats from the past. Another brand that has done so is Zenith, and the manufacturer from Le Locle has released some real stunners. It’s been great seeing the famous El Primero trio from 1969 return to the spotlight. While the A386 is the most popular out of the three, my personal favorite is the A384 with its characteristic case shape, beautiful panda dial, and iconic Gay Frères ladder bracelet. It was a logical step for the brand to let these icons return to their original form. They are part of the brand’s Chronomaster Revival collection that contains more great classic pieces. 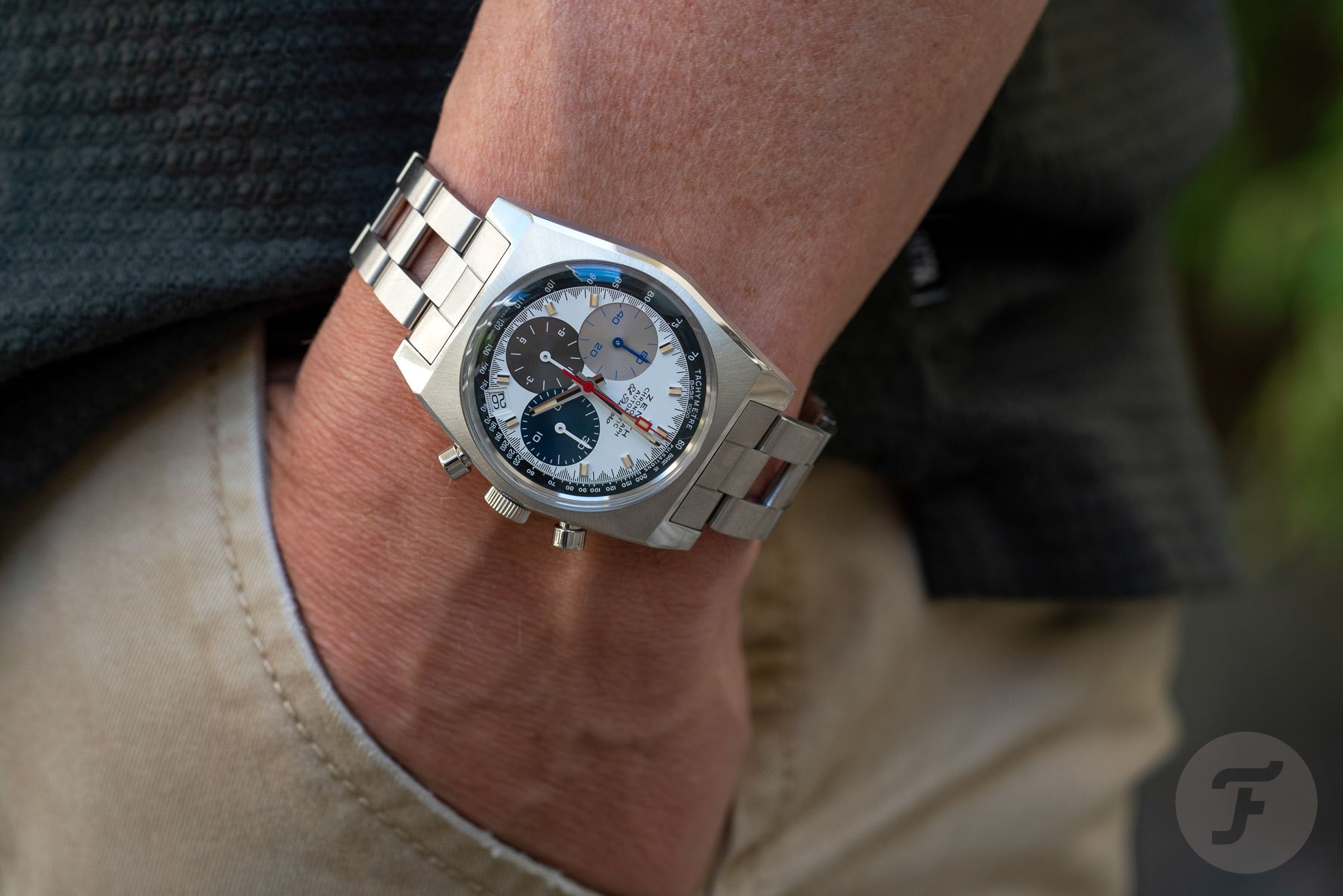 The Zenith Chronomaster Revival A3817

Zenith — a brand of brilliant classics

Luckily for us, Zenith didn’t stop with the releases of the original El Primero trio. We have seen the brilliant A3817 and the A3818 “Cover Girl” return as well. To my big surprise, Zenith did not shy away from re-releasing the Defy A3642 at the beginning of this year. It came as a surprise because the watch is pretty quirky. It is a beloved design amongst Zenith fans, but the watch’s looks are definitely an acquired taste. Nevertheless, all 250 available pieces sold out very quickly. It is proof that Zenith is doing great things with its icons from the past. 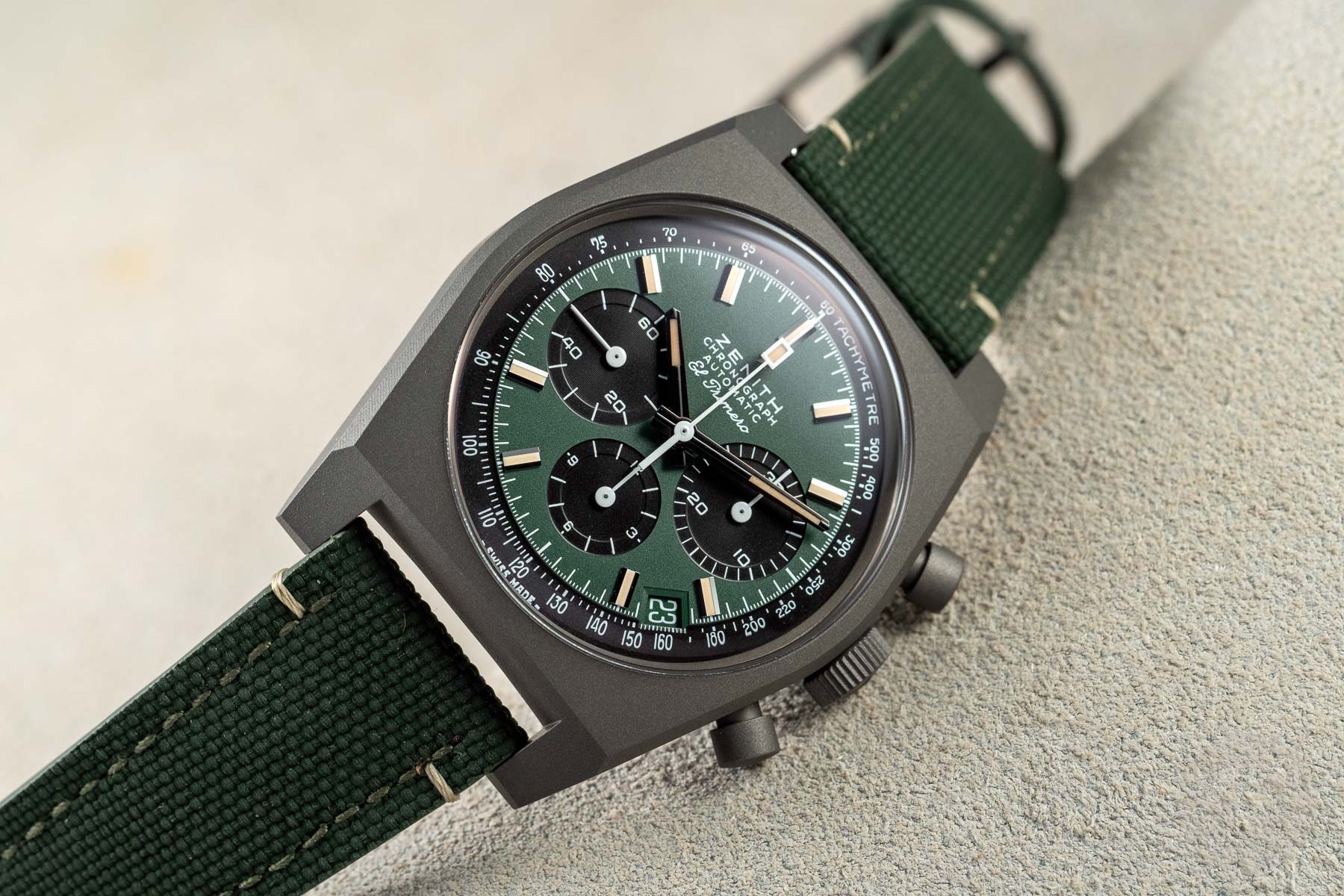 On top of that, these icons have inspired a great series of new releases. The A384 Lupin models, the Chronomaster Revival “Poker Chip” and the “Safari” models, as well as the stunning Chronomaster Original A386 with the reverse panda dial on a bracelet are just some of the stunners the brand has released. It’s been great to see Zenith really embrace its past and release some amazing watches. Another watch that is legendary amongst Zenith collectors and that I would love to see return is the A277 diver’s chronograph. 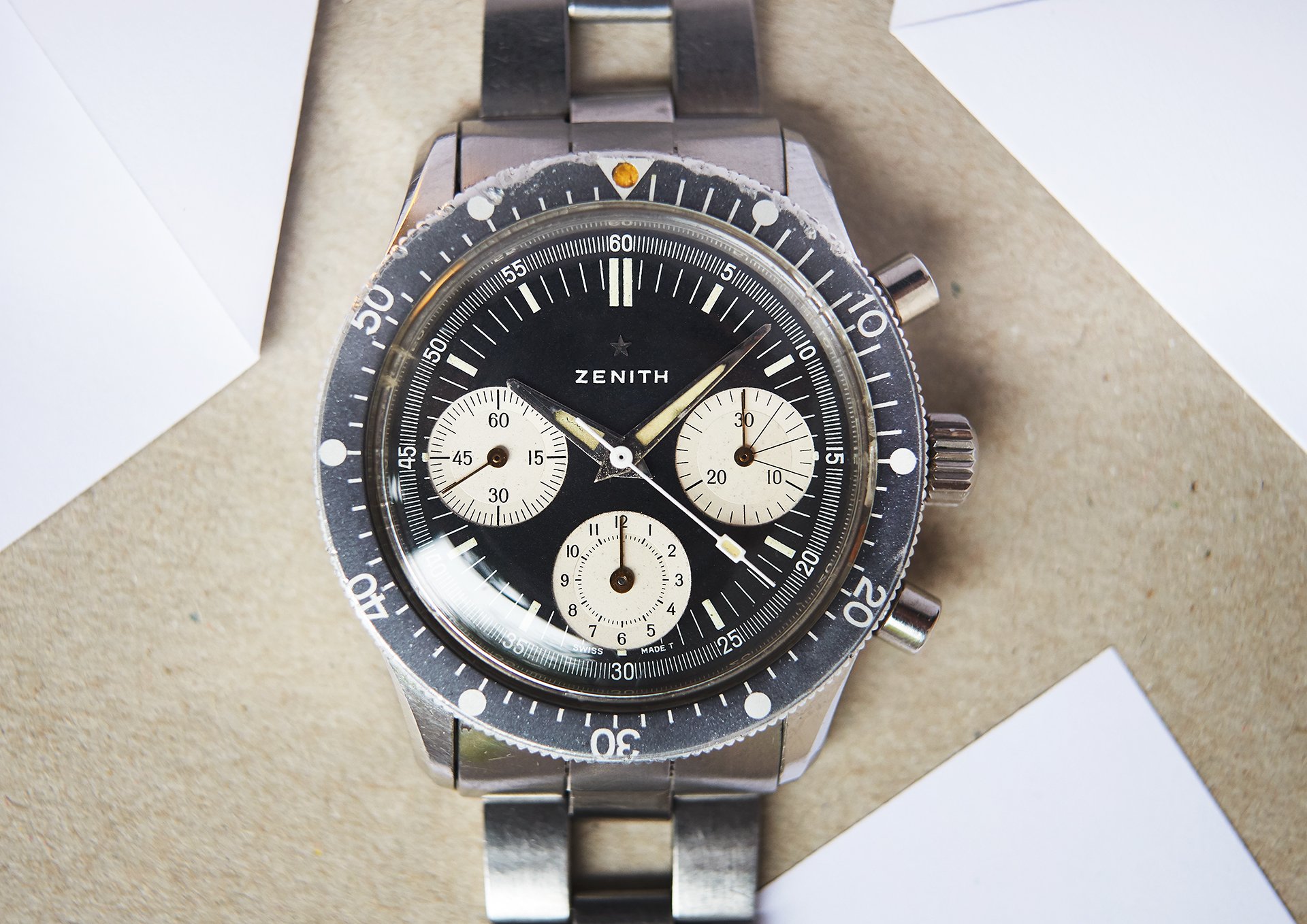 The original Zenith A277

The Zenith A277 was produced for only two years from 1968 until 1970. In that short period of time, the brand produced two versions of this diving chronograph. Overall, these two versions are pretty much the same, but there are differences that make them easy to distinguish if you know what to look for. But let’s start with some basic specs. Both versions featured a 40mm stainless steel case that was 14.5mm thick with a lug width of 22mm. I love the wider lug width because it gives the watch more wrist presence when combined with a nice leather strap. The Gay Frères bracelet the watch came on features a 22mm end link but was 20mm wide. 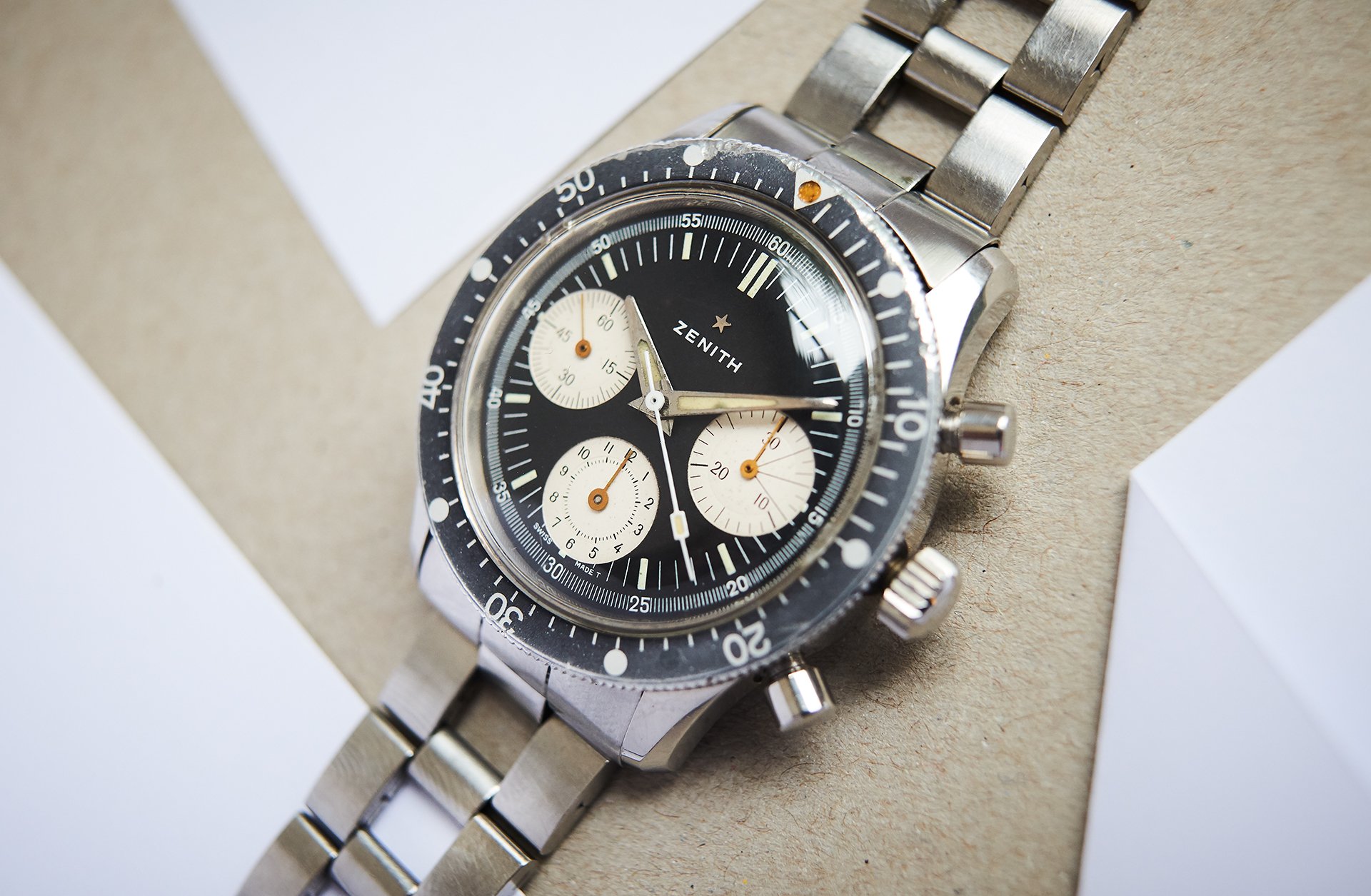 The differences between the two versions are both aesthetical and technical. Let’s start with the former. The first version featured a non-luminous chronograph seconds hand, blued-steel sub-dial hands, and a five-pointed star on the crown. The second version is the one you see pictured above. It came with a luminous chronograph seconds hand, gold-colored sub-dial hands, and a four-pointed star on the crown. As I explained in the Buying Guide article about the best Zenith watches from the 1960s, the second version is my favorite. The addition of the gold-colored hands for the sub-dials adds a touch of color and class. It just feels a bit more lively than the first version, and I love that. 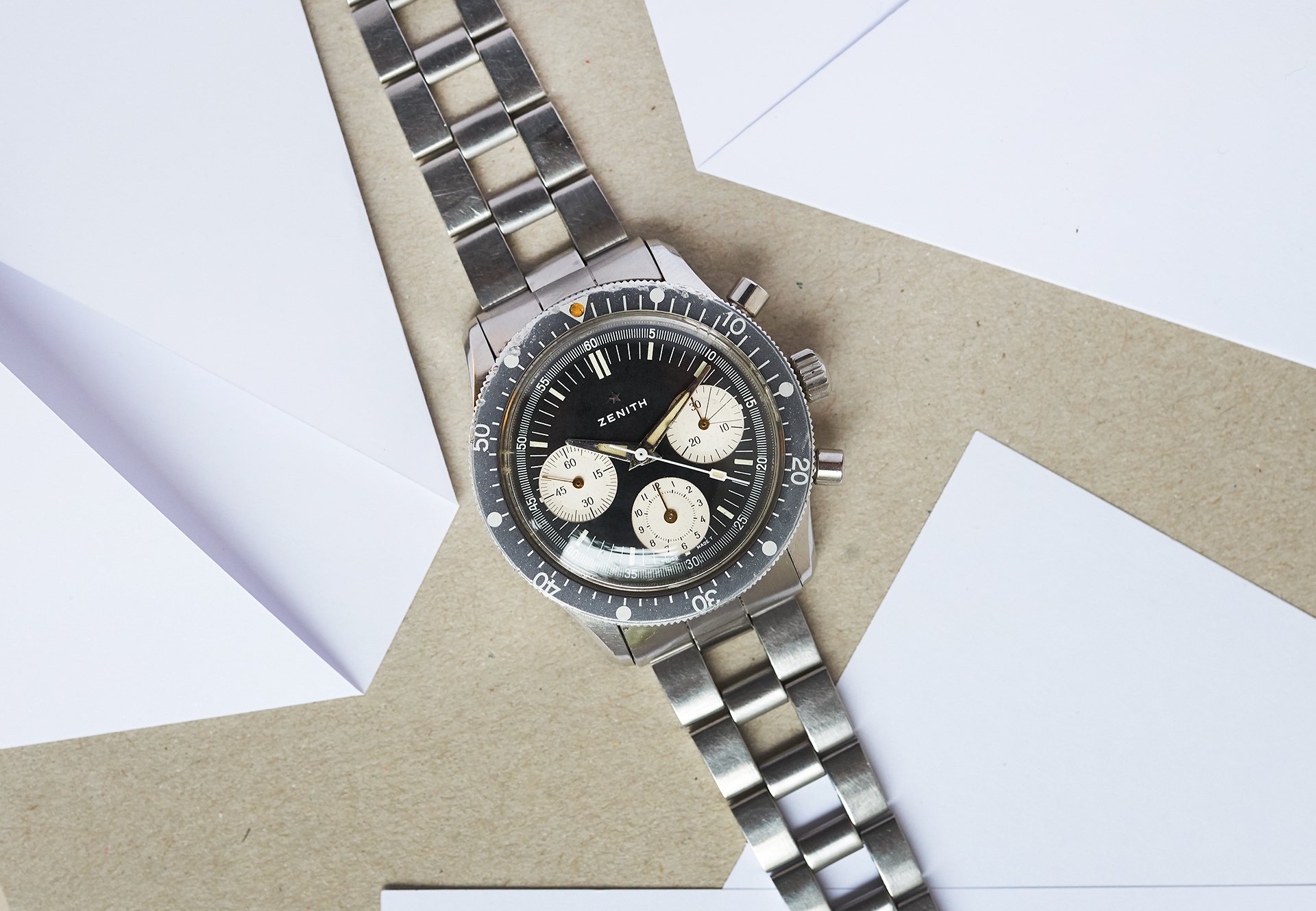 The great design details of the A277

There are so many aesthetic details that make this such a great piece. I absolutely adore the dial design. Overall, it feels balanced despite the fact that it’s a big dial in comparison to the relatively thin bezel. That was not an uncommon sight in the late 1960s, I must add. But as you can see, the dial features two scales. The outer 60-second chronograph scale has the numerals perfectly integrated for every five seconds. Additionally, there is the 60-minute scale with the integrated hour markers. It complements the outer scale perfectly, creating a nice visual balance. The large sub-dials cut into the inner scale but in no way hinder a perfect reading of the time. 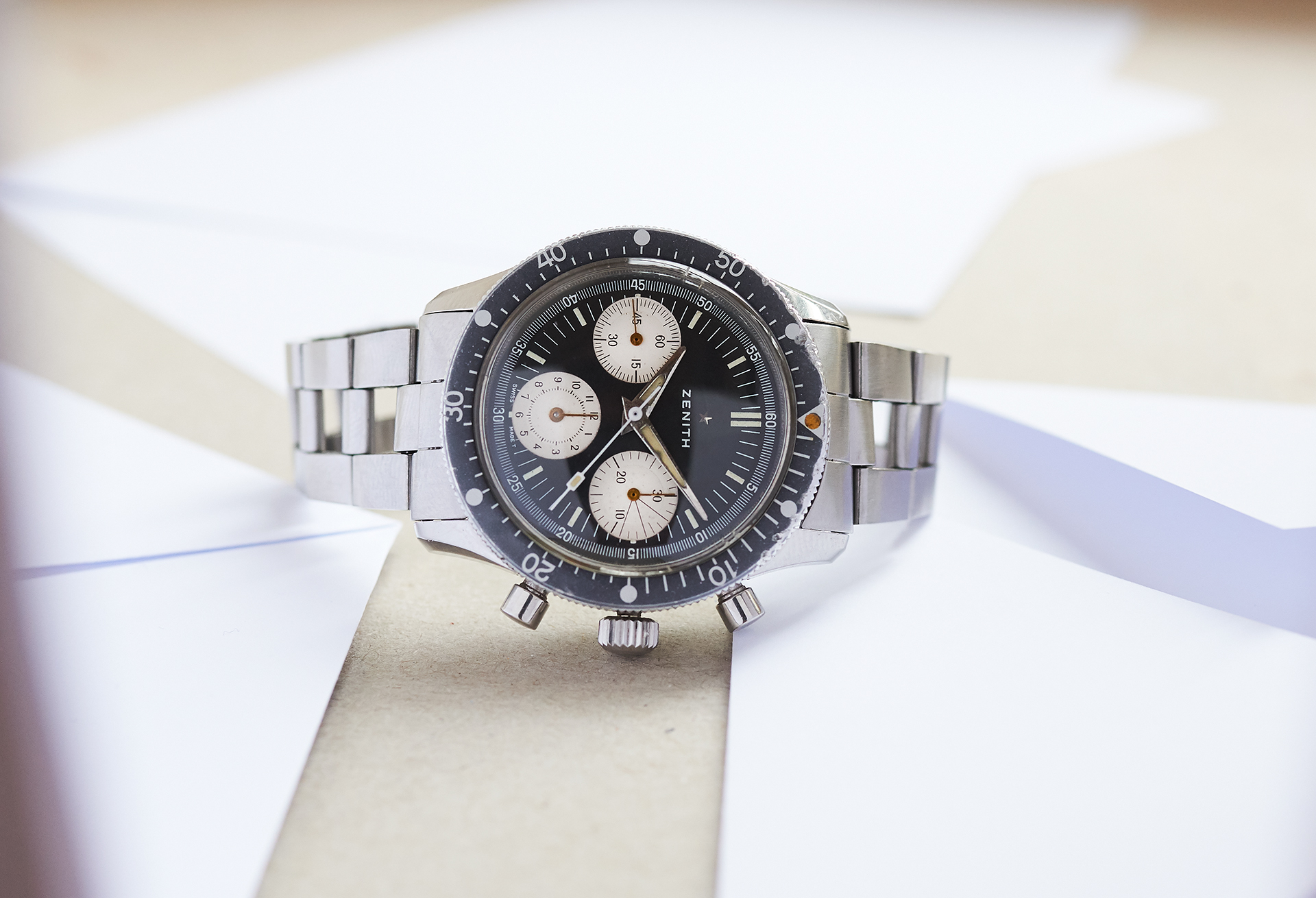 As you can see, Zenith made the clever decision not to add too much text to the dial. It features the logo with the applied Zenith star to keep things very clean and simple. Additionally, you will find the text “Swiss Made”, and that’s it. Because the central part of the dial is very quiet, it perfectly balances out the busier outer portion. Another great detail is the rotating dive bezel. As you can see, the bezel has numerals for every 10 minutes and big dots for every five minutes. You don’t see these big dots a lot on chronograph bezels, and they create a rather funky design that I love. If you go looking for a vintage A277, you will find that some of the bezels have faded over time. Others have been badly damaged, and it might prolong your search for a good vintage example. 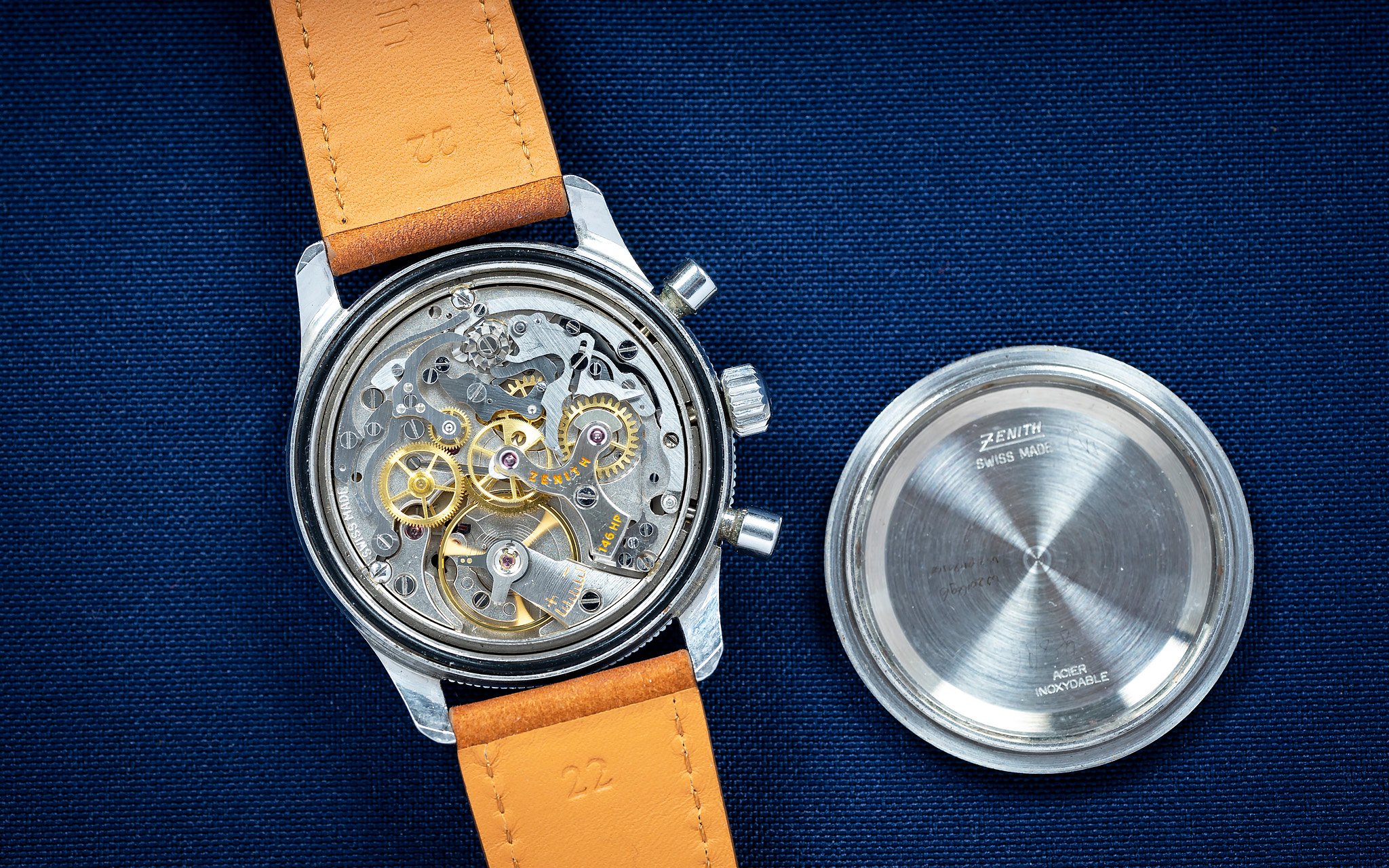 Before “diving” into the case, I’d also like to put some focus on the hands. The lume-filled stainless steel dauphine hands are a joy to see with the contrasting white central chronograph hand. The previously mentioned smaller gold-colored sub-dial hands add even more dynamism and correspond nicely with the orange dot at the 12-o’clock position on the bezel. That’s on my preferred second edition, though. Just like there are two slightly different versions aesthetically, Zenith also used two different movements for the A277. 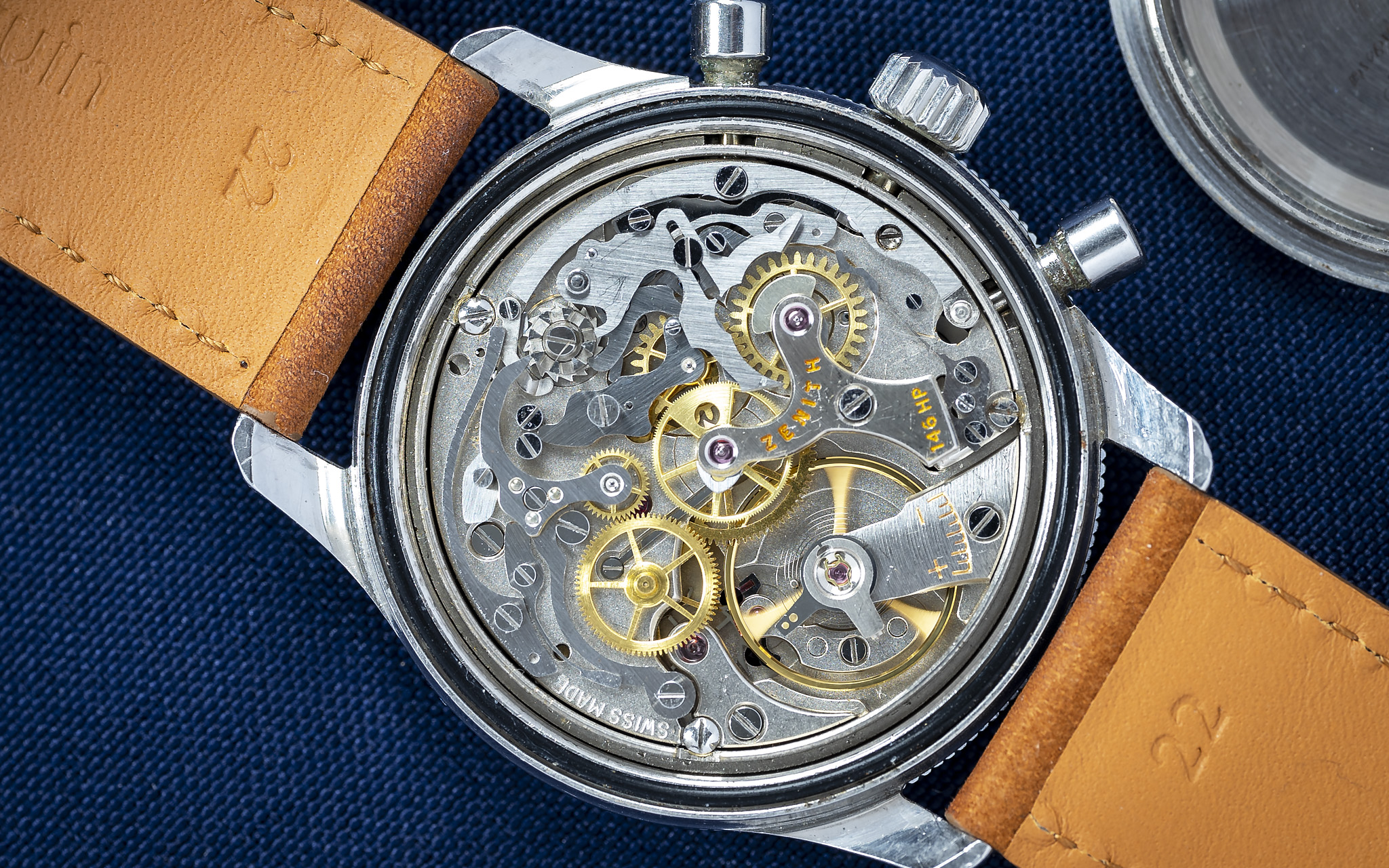 As I discussed in the Buying Guide article, Zenith equipped the first version of the A277 with the manual-wind caliber 146H. The second version, however, housed the upgraded caliber 146HP. In 1960, Zenith acquired Martel Watch Co. — although there is debate as to whether it was actually 1958, 1959, or 1960 — ensuring that it could produce chronograph movements “in-house.” The caliber 146 was one of those movements produced in-house.

The 146H used an overcoil hairspring and Incabloc shock protection. The 146HP, however, had a flat hairspring, Kif shock protection, and a different regulator and balance wheel. The A277 actually shares the caliber 146 with the Movado Super Sub Sea Chronograph from the same era. As with most watches from that time, you will find some vintage pieces that combine the aesthetics of the first version with the caliber 146HP of the second. This could have been done by Zenith itself or during a service of the watch. 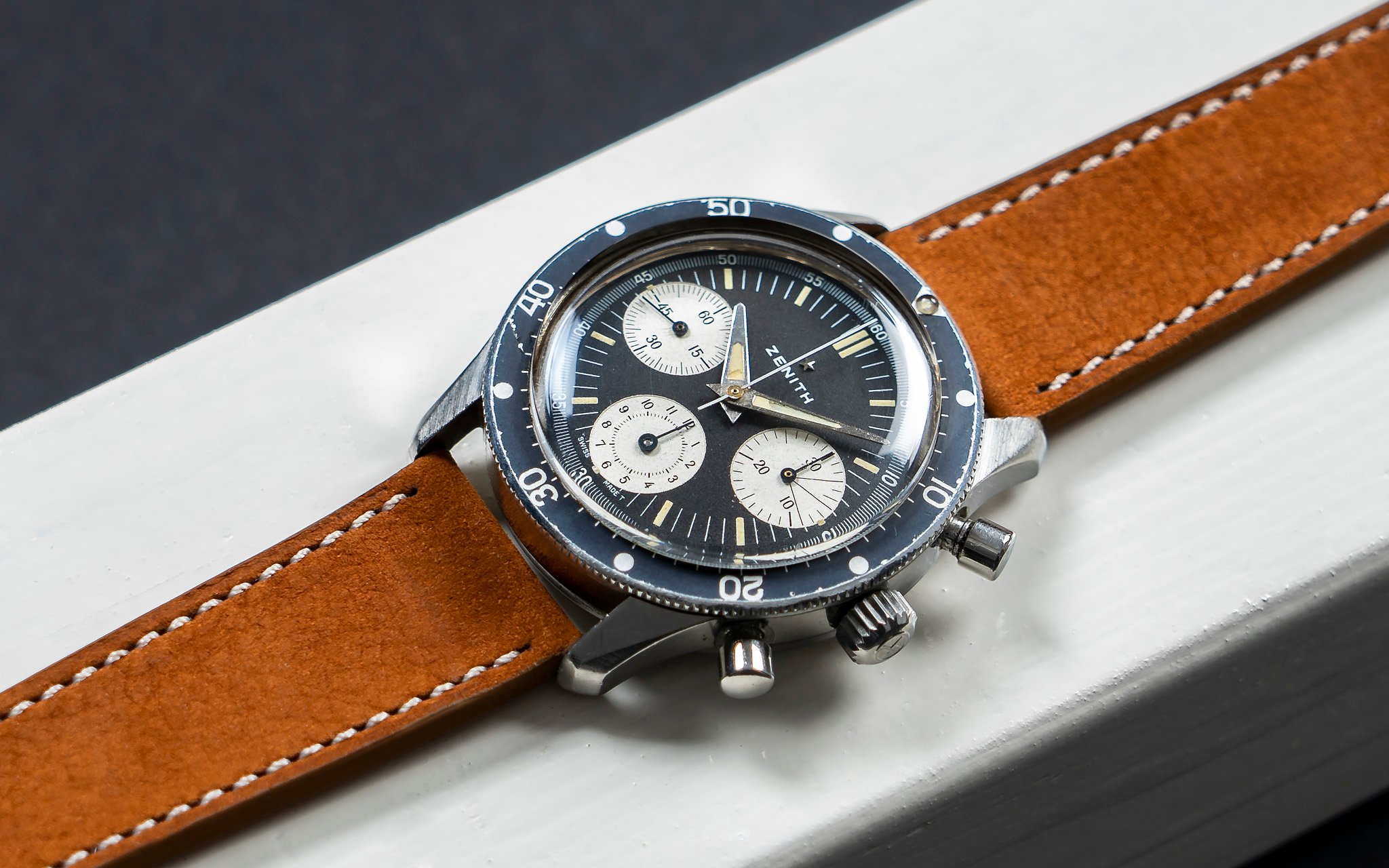 Why should Zenith bring it back?

All in all, both versions of the Zenith A277 look absolutely stunning. Sure, the watch is definitely not completely unique in the way that it looks. But it’s the combination of the design of the case, the bezel, and the dial that make this stand out for me. It just feels visually balanced and very pleasing to the eye. In my opinion, it makes this one of the best-designed chronographs of the 1960s. Add the in-house movement, and this is a true statement of late-’60s brilliance. And I’m not alone in that opinion. The A277 is recognized as one of the icons of that era. Zenith collectors often will pay roughly between €7.5K and €15K for a vintage A277. 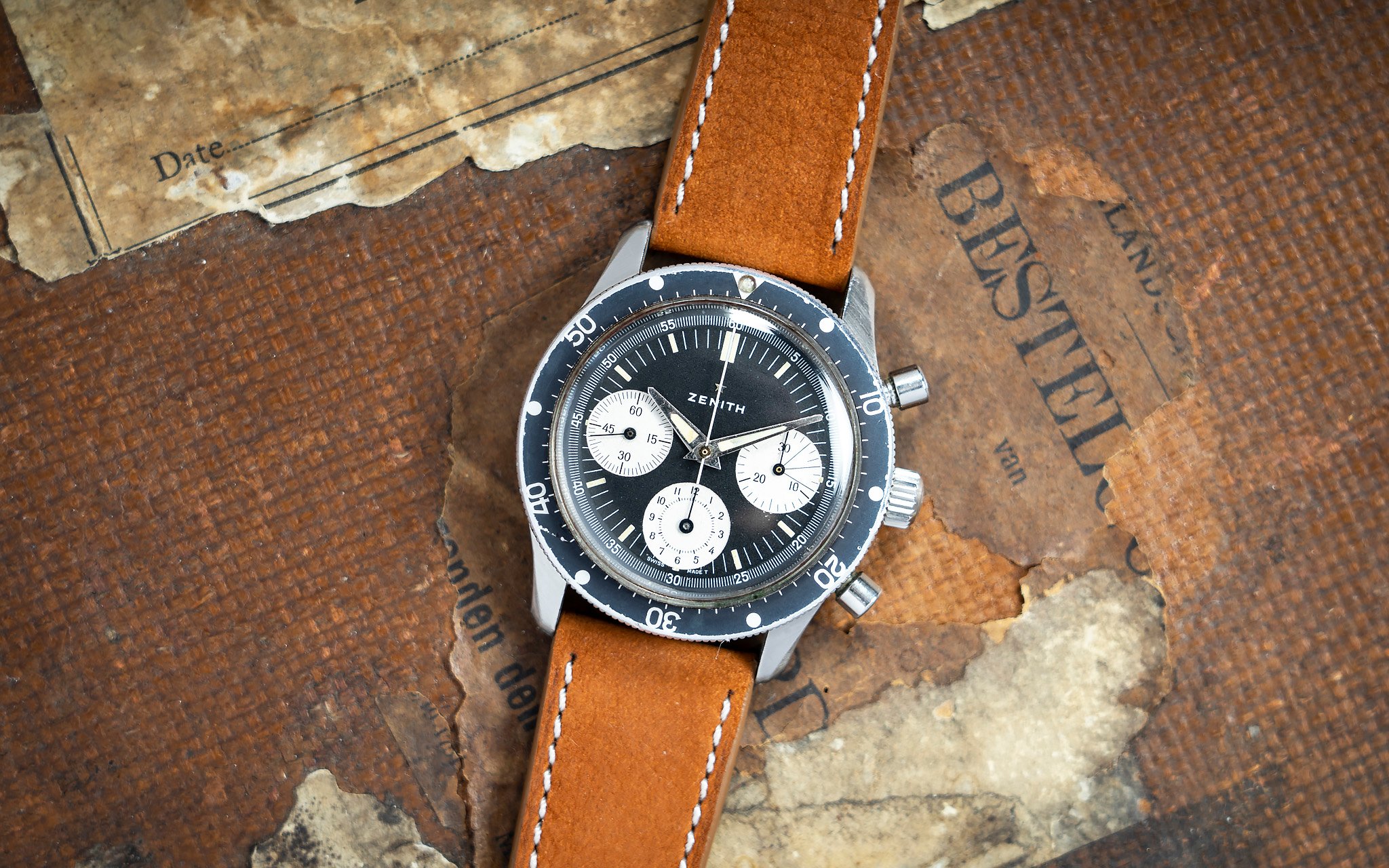 That’s obviously a lot of money, but it shows that Zenith has more than the El Primero timepieces that make the brand so special. And Zenith itself also recognizes that. The A277 is part of a series of Zenith Icons that the brand has sourced, restored, and certified before selling them again. Additionally, some of these Zenith Icons have inspired the design of the brand’s current timepieces. The A277 was one of a number of watches that inspired the design of the Chronomaster Sport. 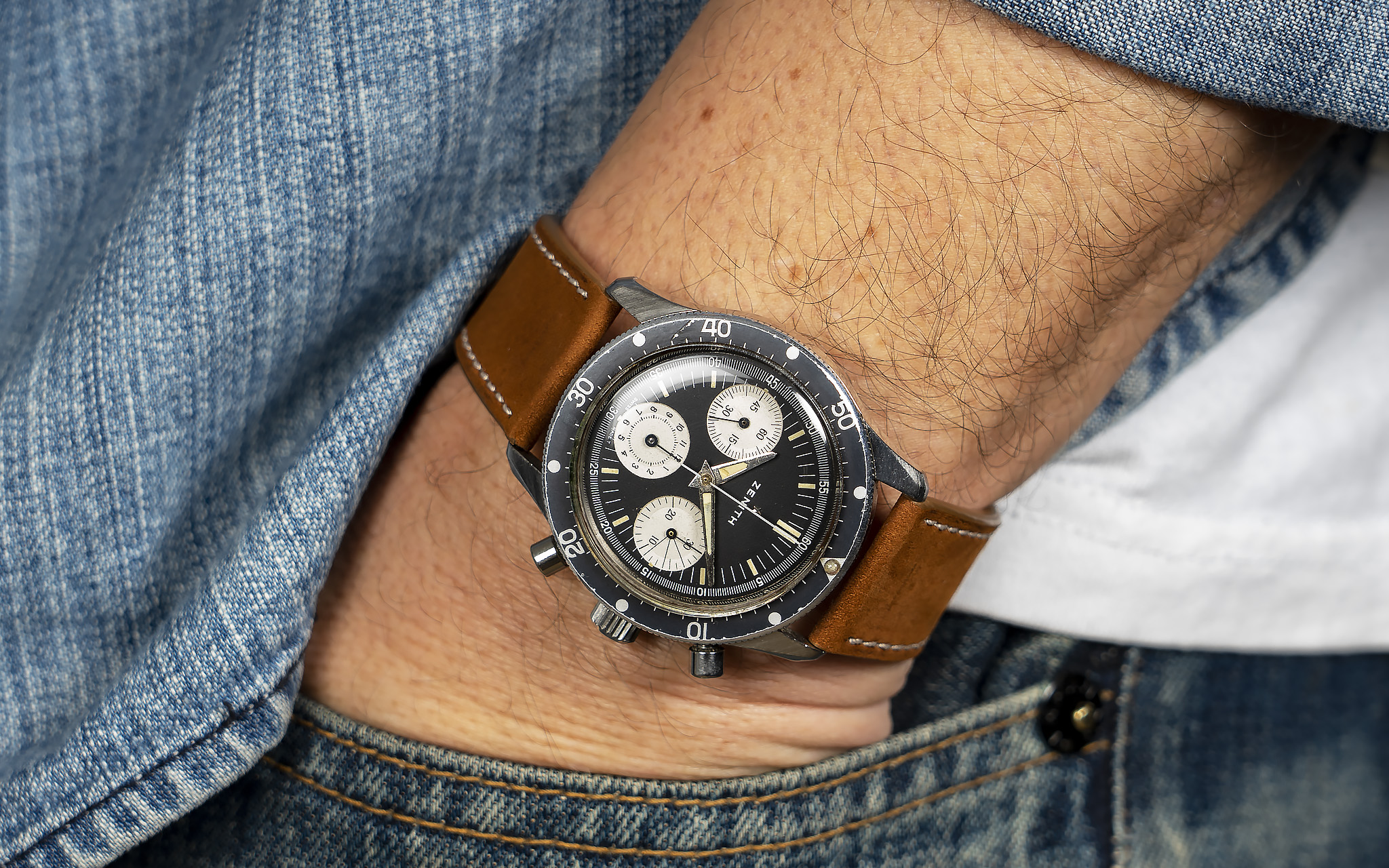 Zenith A277 as inspiration for a line of dive watches?

Although I get that the icons from the past inspire the timepieces of the present, current models don’t always do justice to the classics. Luckily, Zenith has created the Chronomaster Revival collection for faithful re-issues of its best and most famous watches from the past. Knowing how beloved the A277 is and seeing the brilliance of its design and in-house movement, I would love to see a modern re-issue of this watch. Or even better, maybe this chronograph dive watch could serve as inspiration for a new line of Zenith dive watches. Because if there is one thing missing from the modern Zenith collection, it’s a series of cool dive watches. And the A277 is exactly the right inspiration for that kind of wishful thinking.

Hot Topics
Laventure Automobile Chronograph With A Proprietary Movement — Marking A Huge Leap Forward For One Of The Industry’s Most Promising Brands
155 comments
Fratello Exclusive: An Inside Look At The MoonSwatch Production Facilities
75 comments
Selling Your Watch To A Dealer Or Trading It In — Tips From A Former Watch Dealer
49 comments
Summer Splash — Round 2 : Jorg’s Tudor Pelagos FXD Vs. Lex’s Hublot Big Bang Integral Ceramic Sky Blue
47 comments
The Top 10 GMT Watches Right Now — From Ball, Grand Seiko, Tudor, And More
44 comments
Popular
A Question From A Reader: “Which Modern Speedmaster Is Closest To The Original Moonwatch?”
Robert-Jan Broer
13
Two Patek Philippe Nautilus Watches: 3700/1A Versus 5711/1A
Robert-Jan Broer
15
You Asked Us: Tissot Powermatic 80 Seastar 1000 or Longines HydroConquest
Robert-Jan Broer
16