The ’90s was quite an era for dive watches. The decade saw many models released that continue to influence our expectations when it comes to divers today. Zodiac’s offerings were no exception. In the ’90s, the brand released a series of watches, each designated by a colored dot on the dial. To me, the most charming and interesting were the Red Point models, namely the Red Point divers. Today, I’ll give you a small insight into the history of these watches, as well as highlight some of my favorite models from that era. And who knows? Maybe the folks at Zodiac are listening and will also find this a good idea. Regardless, I think the time has come to show these classic divers a bit of much-deserved appreciation.

Remember that these Red Point divers were released in the same decade as other iconic dive watches, including the Seiko SKX007, the Omega Seamaster Professional (worn by Pierce Brosnan as James Bond), and even the Citizen NY0040 diver. And while the Red Point divers perhaps didn’t become as legendary as the models mentioned above, there’s no reason why they shouldn’t make a successful comeback, especially these days when custody of the Zodiac brand is in the capable hands of the Fossil group. And though its foundation is solid today, it has been a long and winding road for the brand. It is worth having a brief look at Zodiac’s history to help us understand why these divers might ring a bell in terms of design. 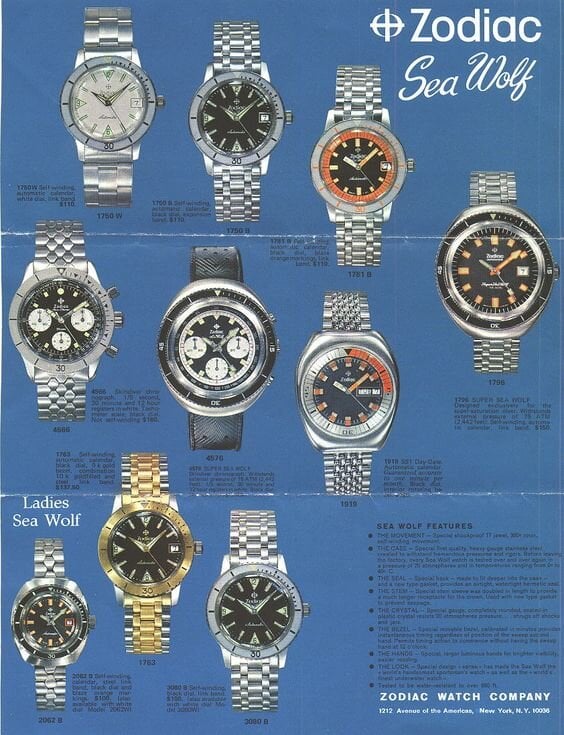 Zodiac through the years

I promise to keep this part short and sweet. In the end, we’re here to talk about a watch (or a series of watches) that I’d love to see make a comeback. However, in the case of what Zodiac was up to in the ’90s, it’s worth having a little bit of context. Now, Zodiac is a Swiss brand that has seen its fair share of ups and downs since it came onto the scene in 1882. The brand saw great success in the ‘50s and ’60s, yet it suffered the fate that many others did in the quartz crisis of the 1970s. Zodiac then went through a roller-coaster ride of rebirths, but nothing really stuck until 1990. This is when Willy Gad Monnier brought the brand back for a brief seven-year stint known as the “Monnier era”. 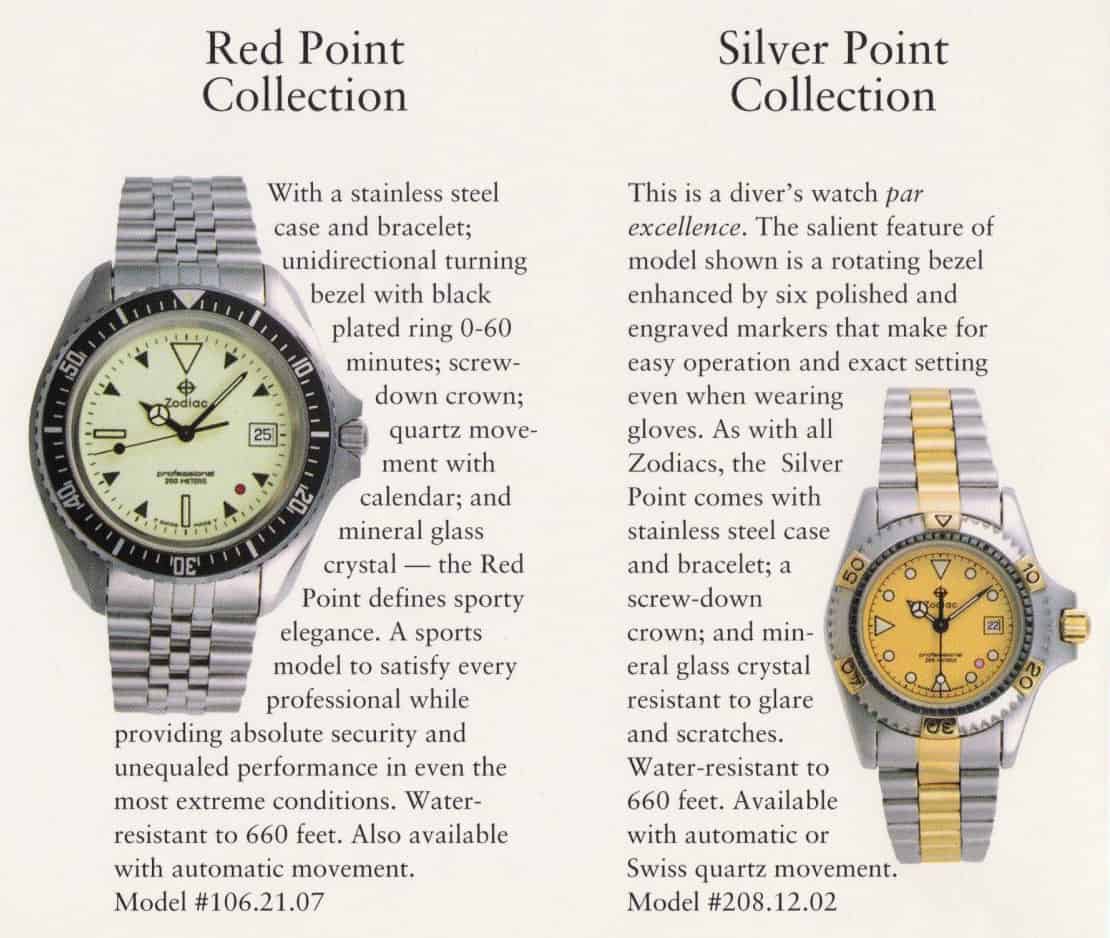 Previously, I mentioned how some of the models from that time might ring a bell. Well, that’s because, before his time leading Zodiac, Monnier was the CEO of TAG Heuer for a brief period before leaving on reportedly bad terms. Judging by the similarity of some of these Zodiacs to TAG Heuer models from the previous decade, Monnier took a number of blueprints with him when he left. And though the similarities are inescapable, that doesn’t make these Zodiac divers any less charming. And especially in the case of the Red Point dive chronographs equipped with the ever-capable Valjoux 7750, the designs still hold up today. That just about wraps up the history portion of the article. If you want to know more, I recommend consulting James Enloe’s detailed article on the Zodiac Point series for Worn & Wound here. 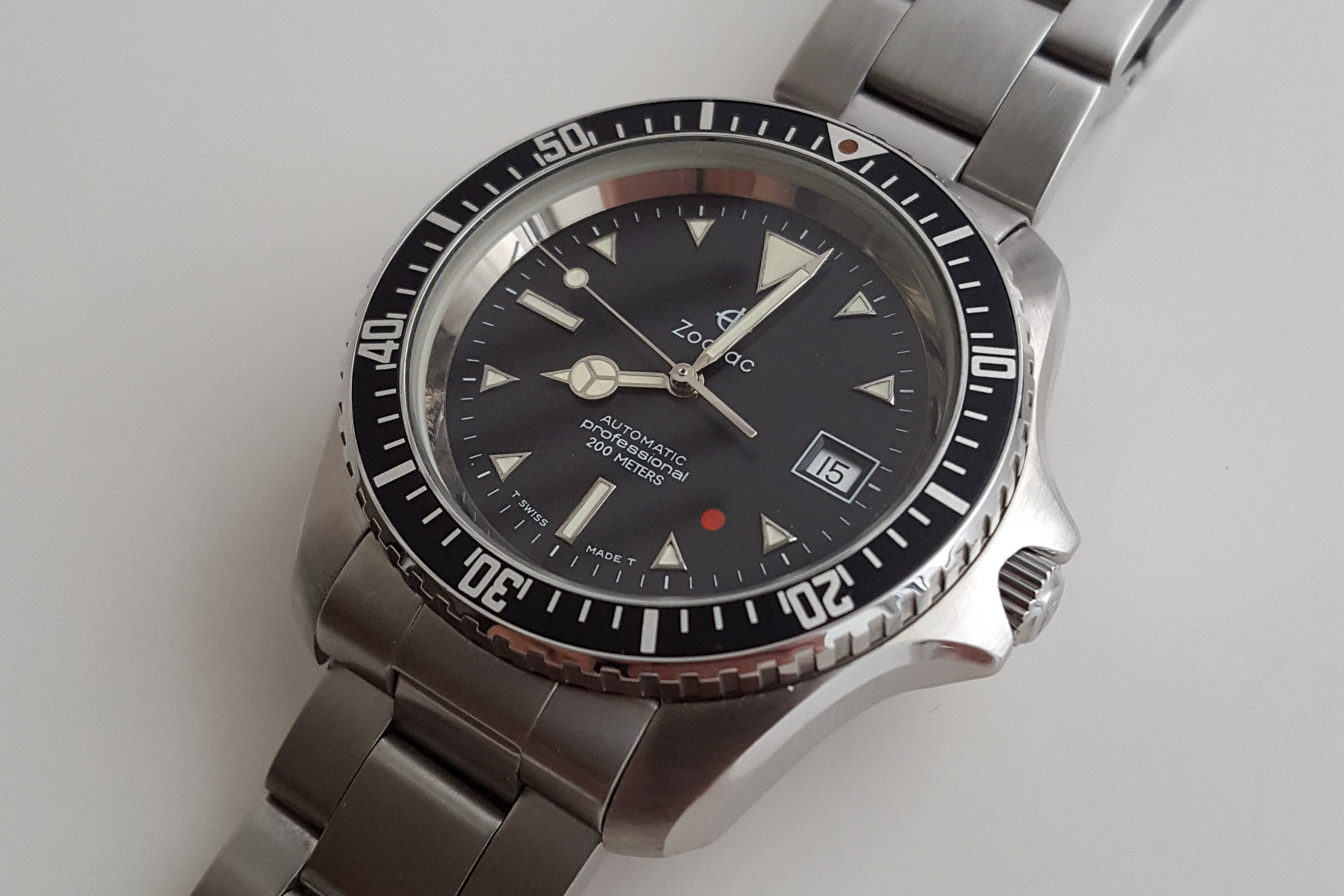 The Point series from Zodiac was not limited to the Red Point watches. There were three other denominations (the blue, silver, and gold Point models). These series included dress watches, chronographs, and dive watches in steel, gold, and two-tone variants. And as much as I do love the dive chronograph, I’ll leave that for another day (clearly, it also deserves a comeback!). For sanity’s sake, I will focus on three specific divers from the series — the classic black-dial/black-bezel diver, the lume-dial diver, and finally, a gray-dial model with a metallic bezel. In my opinion, these three perfectly summarize the Red Point series. And though their form should be familiar to those who know the TAG Heuer 1000 Professional divers of the 1980s, that doesn’t detract from these being excellent watches.

Now, these watches are ripe for a modern relaunch and are also still widely available on the secondhand market. They are perhaps (in the same way that the Monnin TAG Heuers are) not as popular as they deserve to be. However, for collectors whose tastes align with the charm of these pieces, there are plenty of opportunities to pick them up for a steal. Whether it’s the cheaper quartz models or the slightly more desirable automatics, you really can’t go wrong picking up a vintage model. However, we all know today’s watch market is full of reissues from even the most prolific brands. And these chunky-cased divers would do well in a space filled with enthusiasts prone to the appeal of neo-vintage charm with modern-day construction. 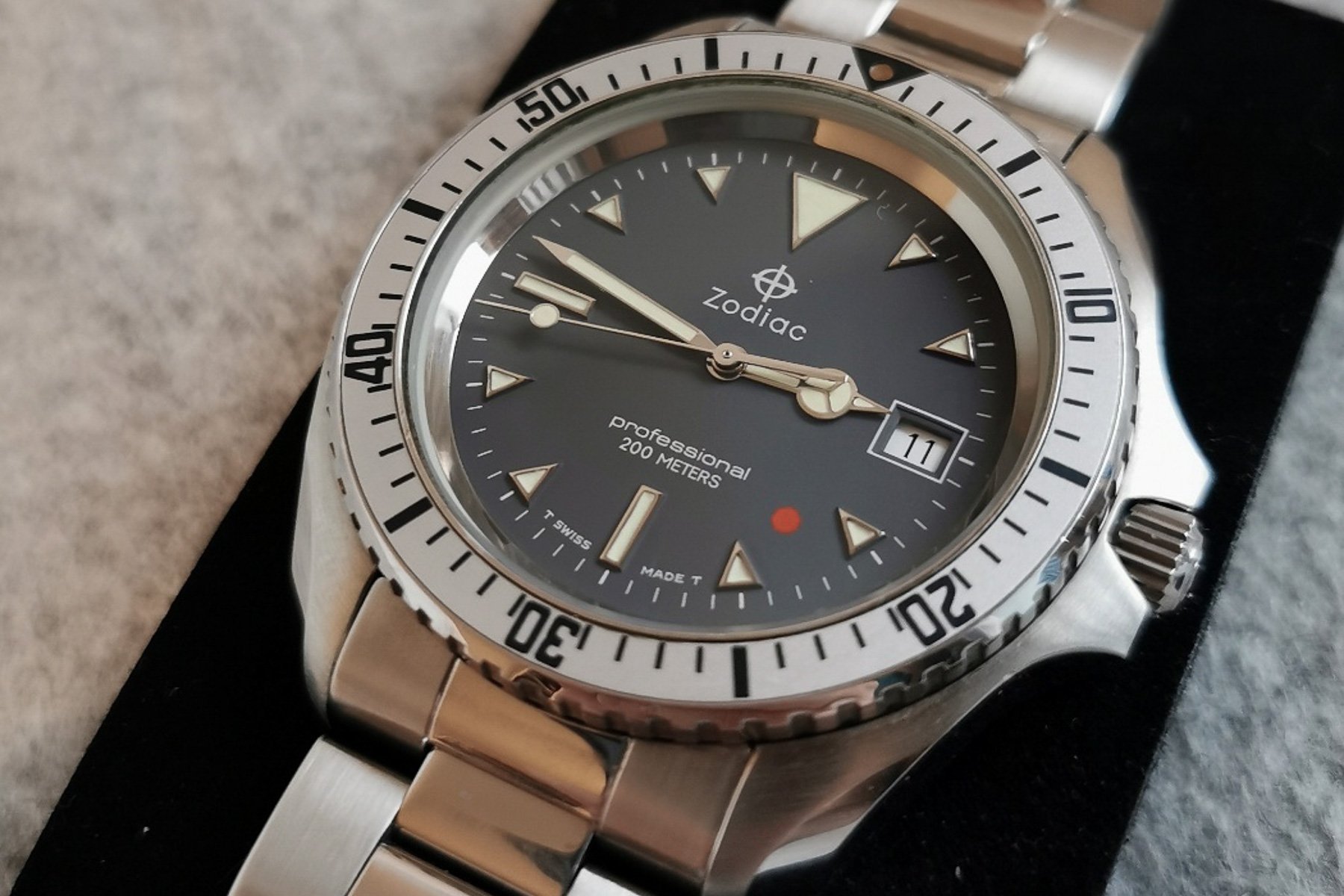 There you have it, folks! Whether these are new to you or you’re a keen admirer of the Zodiac Red Point divers, I hope you enjoyed this look back and kind request to the brand to make these happen once again. We’re ready, waiting, and wanting more! And speaking of Zodiac, keep your eyes on the site, as my long-term review of the Super Sea Wolf 53 will be dropping soon. In the meantime, this highlight of neo-vintage Zodiacs should work well to whet your appetites for more from one of the coolest, most eclectic, and best value-for-money brands on the market today. 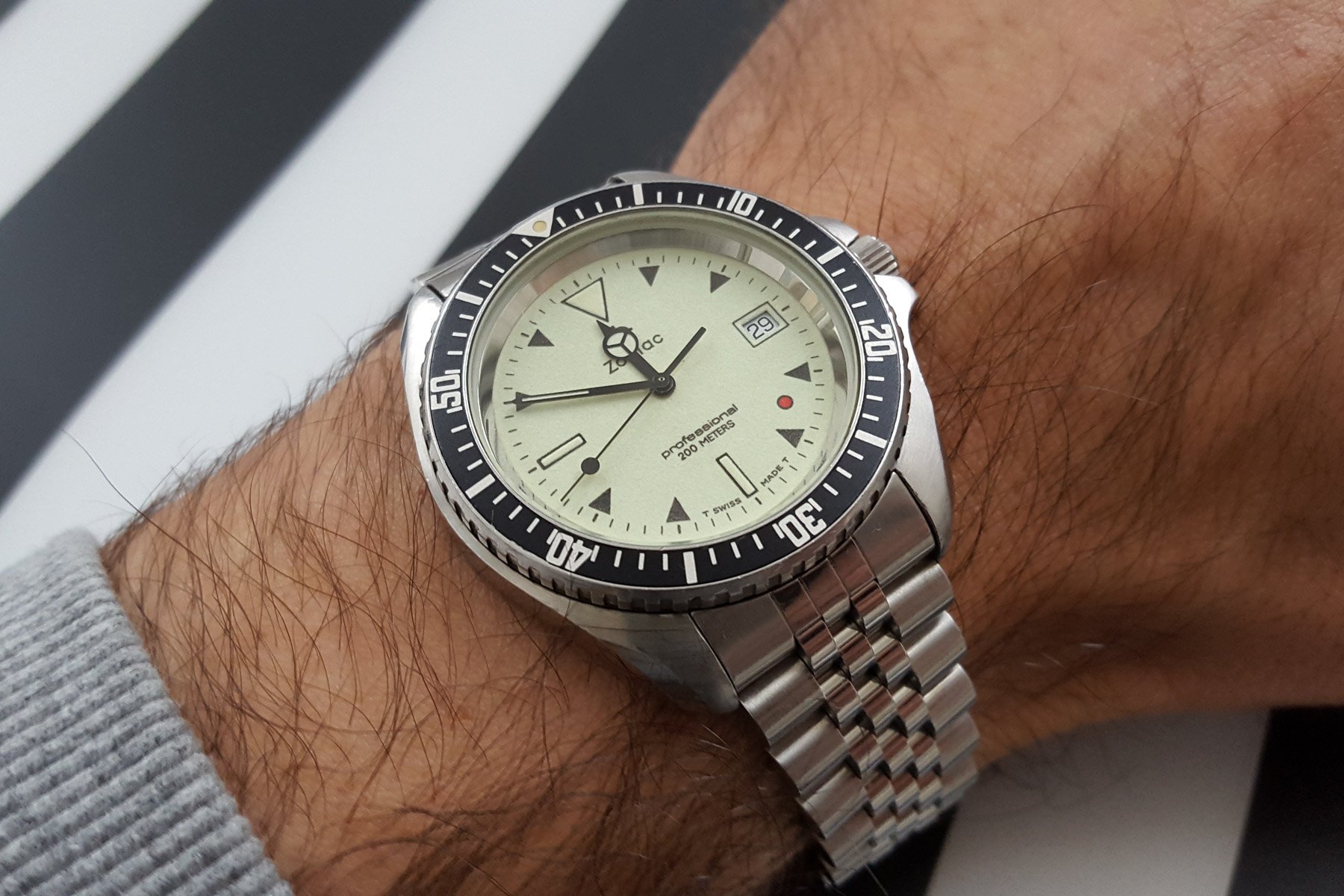 And before I wrap things up, as always, I’ll ask for your thoughts on the Zodiac Red Point divers. What do you make of them? Would you enjoy for these to make a comeback, or would you rather they remain in the history books? Let me know in the comments below.

Special thanks to Ivan (aka Rocky555 on WUS) for allowing me to use the many photographs of some of the Zodiac Red Point divers he has owned through the years.