A watch you don't have to wear on your wrist?
Dave Sergeant
comments 8
Share

Professional dive watches are ten a penny these days. With dive watch history spanning over half a century, it’s difficult for brands to offer something new in the field. Thinking about genuinely useful features for active divers is more than simply bumping the water resistance and adding a helium escape valve. While Delma’s new Quattro covers you with both of those features, the ingenuity of an additional feature makes it worth a look for professional and recreational divers alike. Yes, it has 500m of water resistance and the obligatory HEV, but this watch offers more than many comparable pieces.

What is this new and ingenuous feature I’m speaking of? Well, it’s remarkably simple, really, and also beneficial. Delma’s specialized Rapid Bracelet Exchange System (RBES) enables the watch to perform in three distinct forms. For the first and second, the wearer can quickly switch the watch between the rubber strap and the steel bracelet without needing additional tools. Fiddly tools are not your friend when you’re sitting on the boat’s edge and about to roll backwards into the water. For the third, rather than wearing the watch on your wrist, you can attach the head to a custom-designed decompression plate in a matter of seconds. 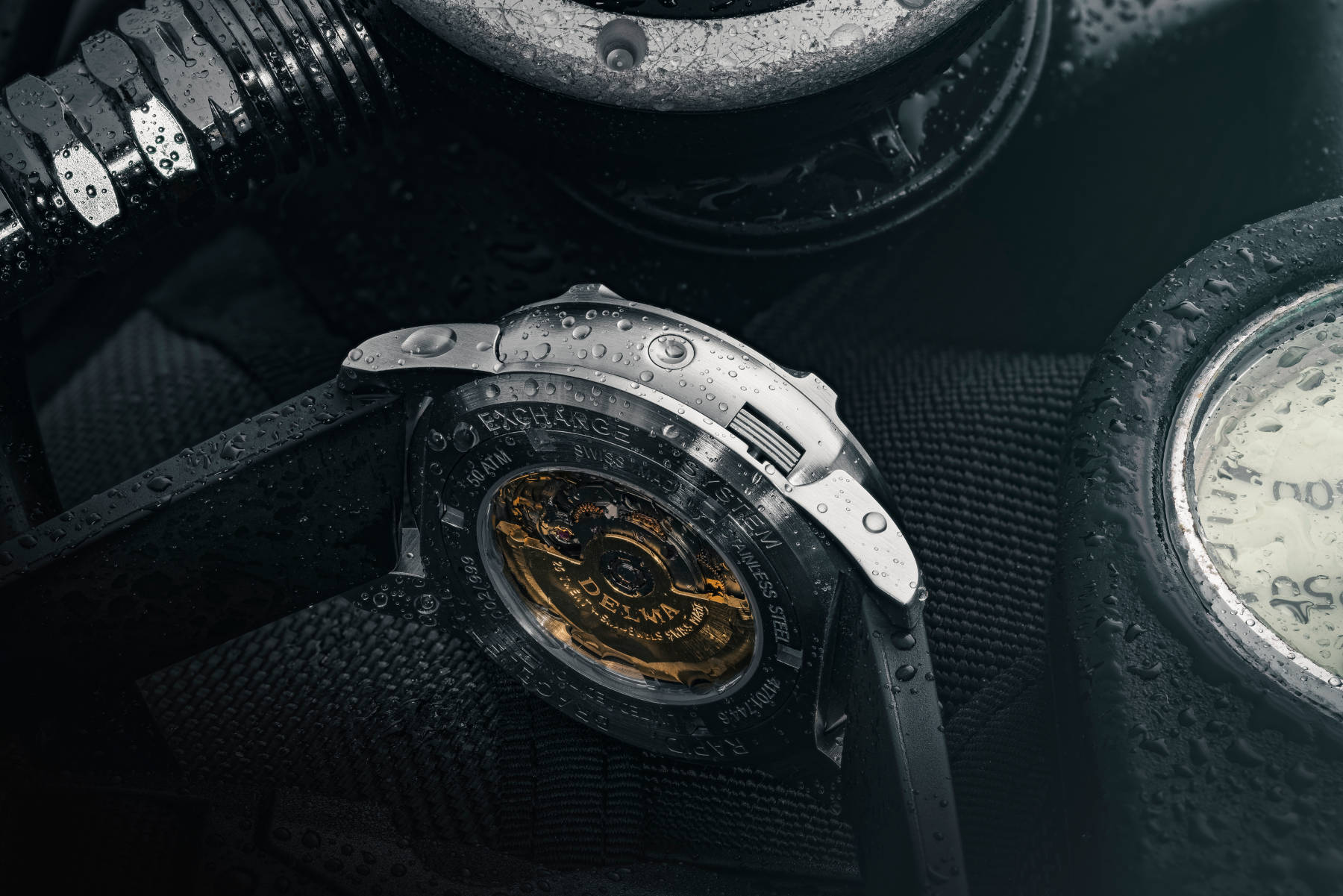 The Quattro is super simple to use…

Releasing the watch from the plate is simple too. You just pull up on a small lever on the case side at 8 o’clock then turn the case clockwise. To reattach it, you position the lever at 9 o’clock and turn the case counterclockwise until it clicks into place. Delma’s RBES uses a bayonet mount, meaning it is straightforward and safe to use in all conditions. Please don’t drop it in the water while unattached, as it will sink. Then again, you’re likely reasonably well equipped to attempt a retrieval, no? 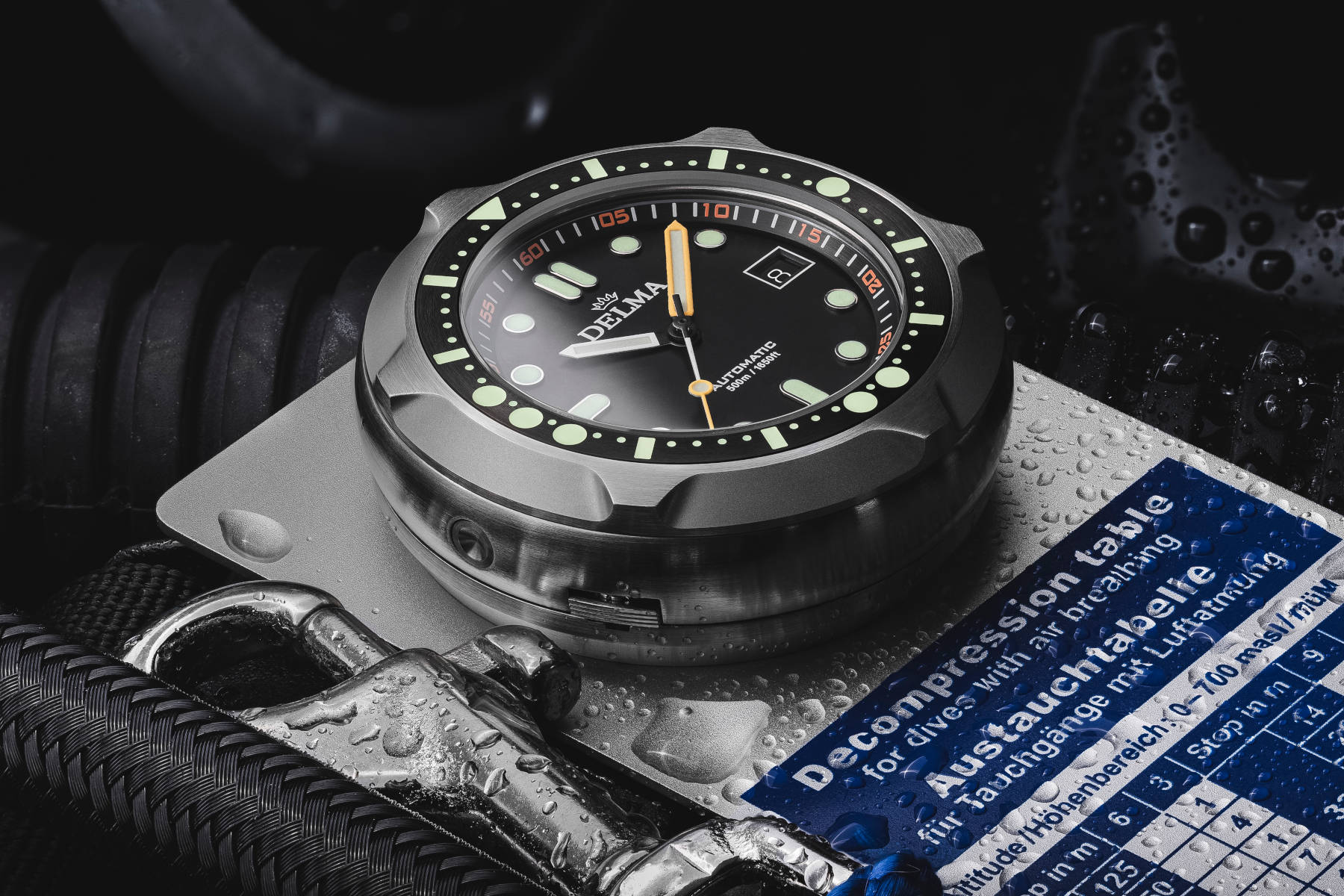 The aluminum decompression plate places the watch together with vital dive data based on the research of Swiss dive pioneers Hannes Keller and Albert Bühlmann. These decompression tables are still industry-standard points of reference for dive planning. To dive deeper and longer, divers have to plan for multiple safety stops on their ascent to slowly allow the body to rid itself of dissolved nitrogen gas in the blood. Failure to do so can lead to severe health issues and even death.

The decompression plate can easily be attached to oxygen tanks or other gear thanks to the handy spring snap hook. On the plate is two separate sets of data. One is for diving at altitudes of more than 700m above sea level, and the other is for below 700m above sea level. The reason for this differentiation is that when diving at altitude, atmospheric pressure is lower than at sea level. Surfacing at the end of an altitude dive leads to a greater relative reduction in pressure and an increased risk of decompression sickness compared to the same dive profile at sea level. 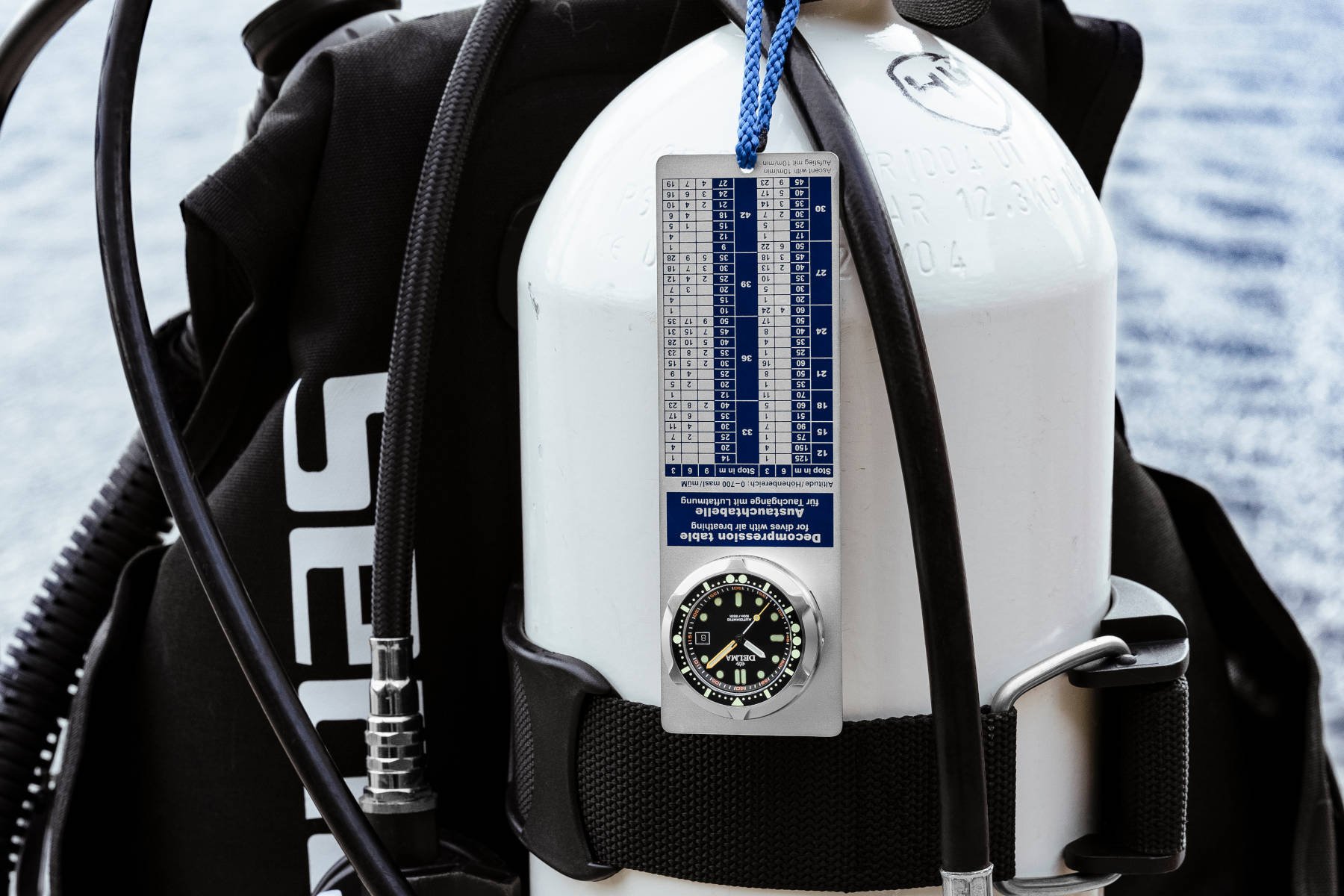 The importance of legibility

Besides its water resistance, legibility is also a vital facet of any dive watch. When underwater, light levels drop very quickly, so being able to read the time and information is critical. For this reason, Delma has used bright orange to emphasize the minute hand and the lollipop seconds hand. To avoid potential confusion, the hour hand received a white color scheme to complement but stand out from the minute hand. This is a color combination that is popular on many professional dive watches. The hands, hour markers, and bezel markings are treated with a generous helping of C5 Super-LumiNova for further underwater legibility. 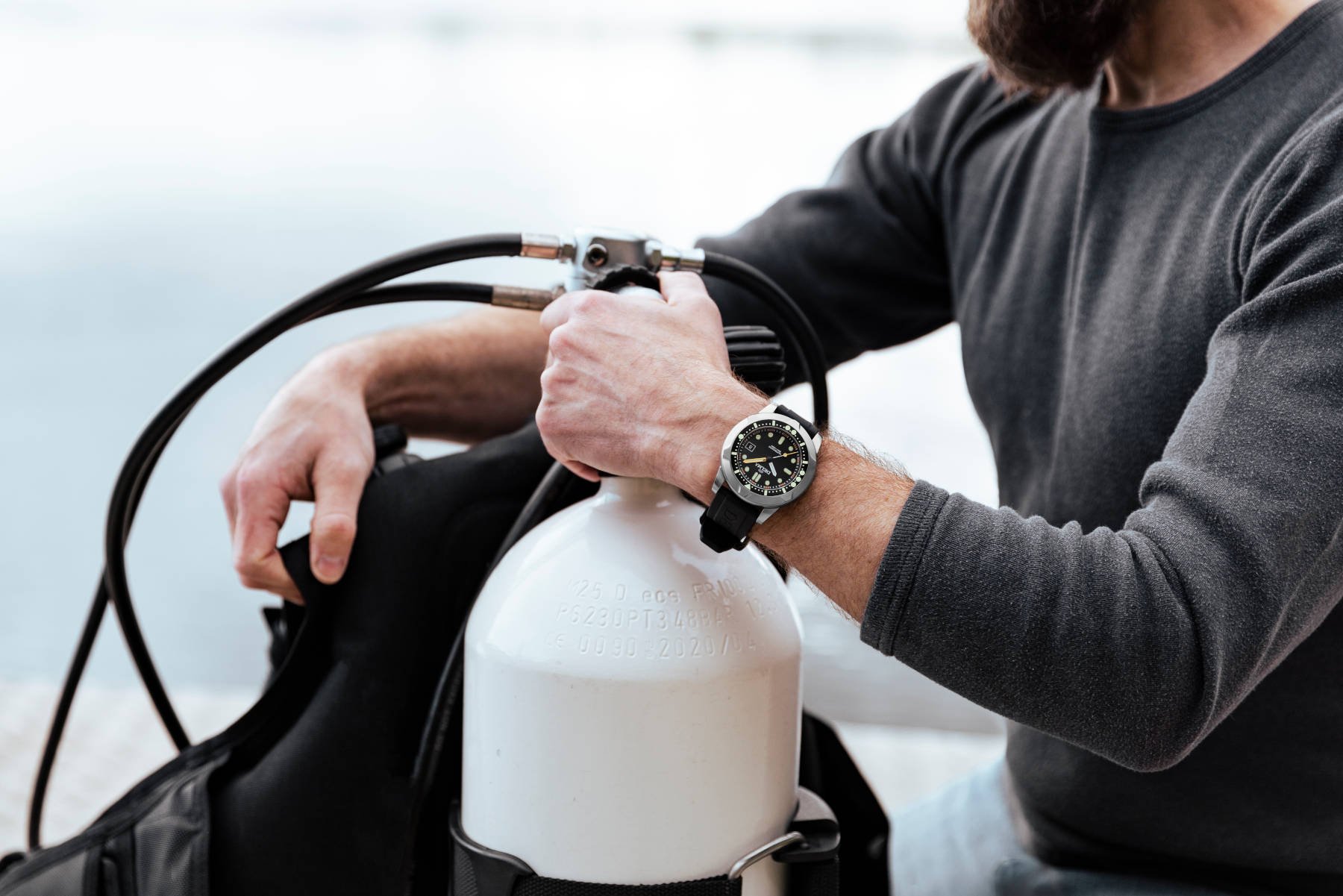 Wearable on the wrist… if you choose to do so!

The 44mm brushed stainless steel case measures just 13.7mm thick. Although this isn’t in the realm of traditionally “slim”, it’s impressive given the professional nature of the watch. Comparable watches are often over the 14mm mark, so 13.7mm is welcome here. I don’t have a lug-to-lug measurement, but the lugs don’t appear to protrude too far from the edges of the case. As such, I’d assume it’s reasonably short, meaning it should wear rather nicely if you choose to wear it on the wrist instead of on the decompression plate. 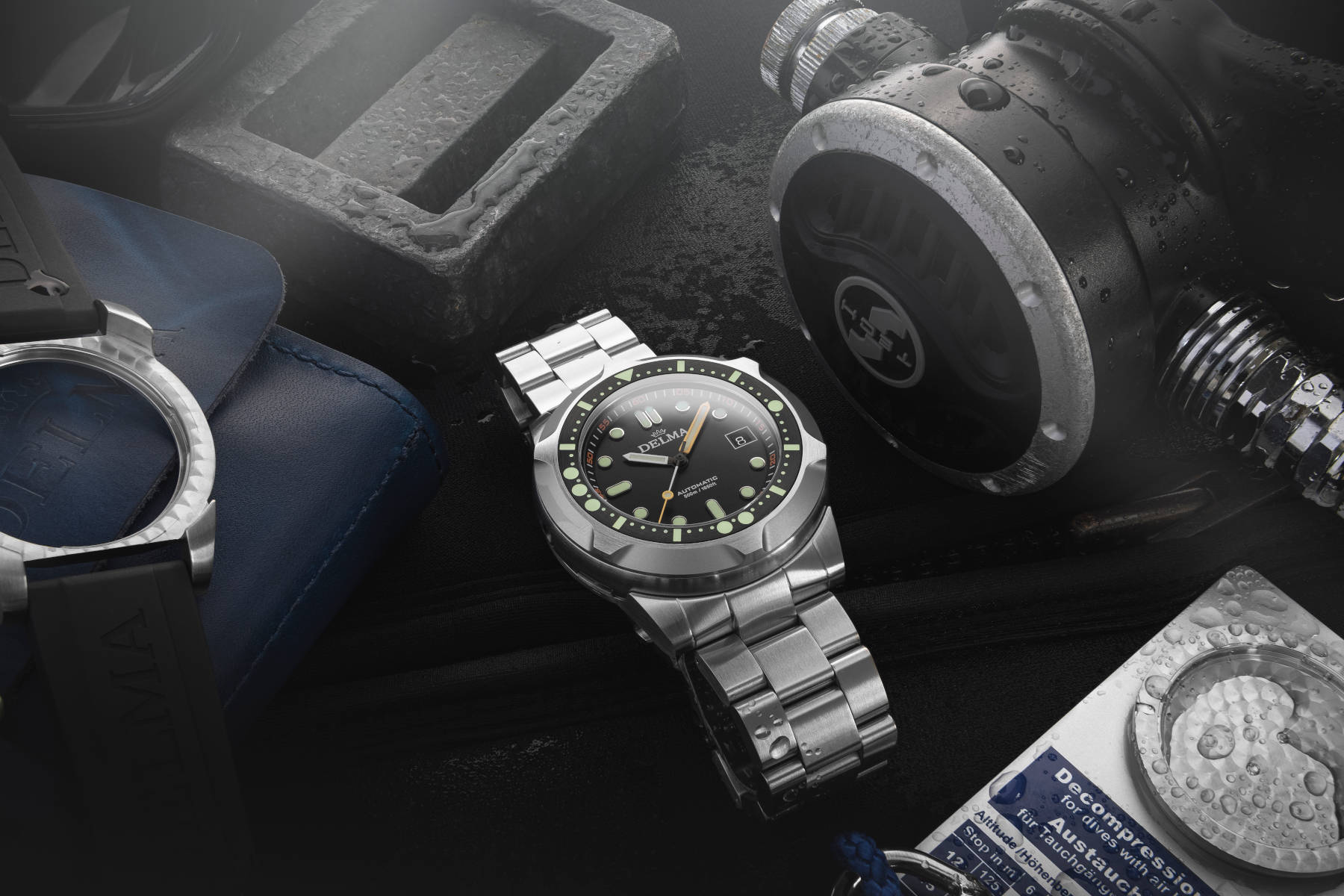 The Quattro is available with a black, blue, or orange dial. You can also choose from a stainless steel or black DLC bezel insert. Delma has equipped the brushed stainless steel bracelet with a deployant clasp, whereas the rubber strap uses a simple pin buckle. The Delma Quattro is limited to 999 pieces, and each watch is powered by the automatic Sellita SW200-1 movement. The watch comes with a special storage box to keep the watch, straps, and decompression plate safe when not in use. Delma also includes a rather fetching blue leather travel pouch for when you’re on the move.

Priced at €2,090, you can find out more about the Quattro on Delma’s official website.

Hot Topics
Introducing: The Omega Speedmaster Super Racing With Spirate System
149 comments
Design Vs. Specs — Which Is More Important To You When Buying A Watch?
85 comments
The Updated Bracelet For The Omega Speedmaster Professional 3861 — Here Is What’s New!
52 comments
The Time To Buy Is Now: How The Current Economic Climate Influences Watch Buying And How You Should React
49 comments
Introducing: The New Cartier Tank Française
49 comments
Popular
(From The Archives) Shut Up & Read The Truth About Cartier Watches
George Cramer
21
10 Tips For Better Watch Photography
Bert Buijsrogge
12
#TBT A Vintage Seiko Buyer’s Guide to Affordable Goodness
Michael Stockton
32