Before I will rattle about the new ‘Drive de Cartier’, a few words about the changes at Cartier, that brought the brand to release this new and different mens model. Cartier is known for their historic collection and design details from these early models, that often come back in new collections. Cartier always relied on their rich design history. Since 2008 however, Cartier changed slowly from a Maison in design, to a powerhouse of  mechanical calibers.

About ten years ago, the brand built a huge 30.000m2 manufacture in La-Chaux-de-Fonds and led by Carole-Forestier Kasapi, the brand launched one movement after another, from the 1904MC automatic caliber (that became the base caliber for a couple of complications) to the impressive Calibre 9454MC, used for the Mysterious Double Tourbillon. 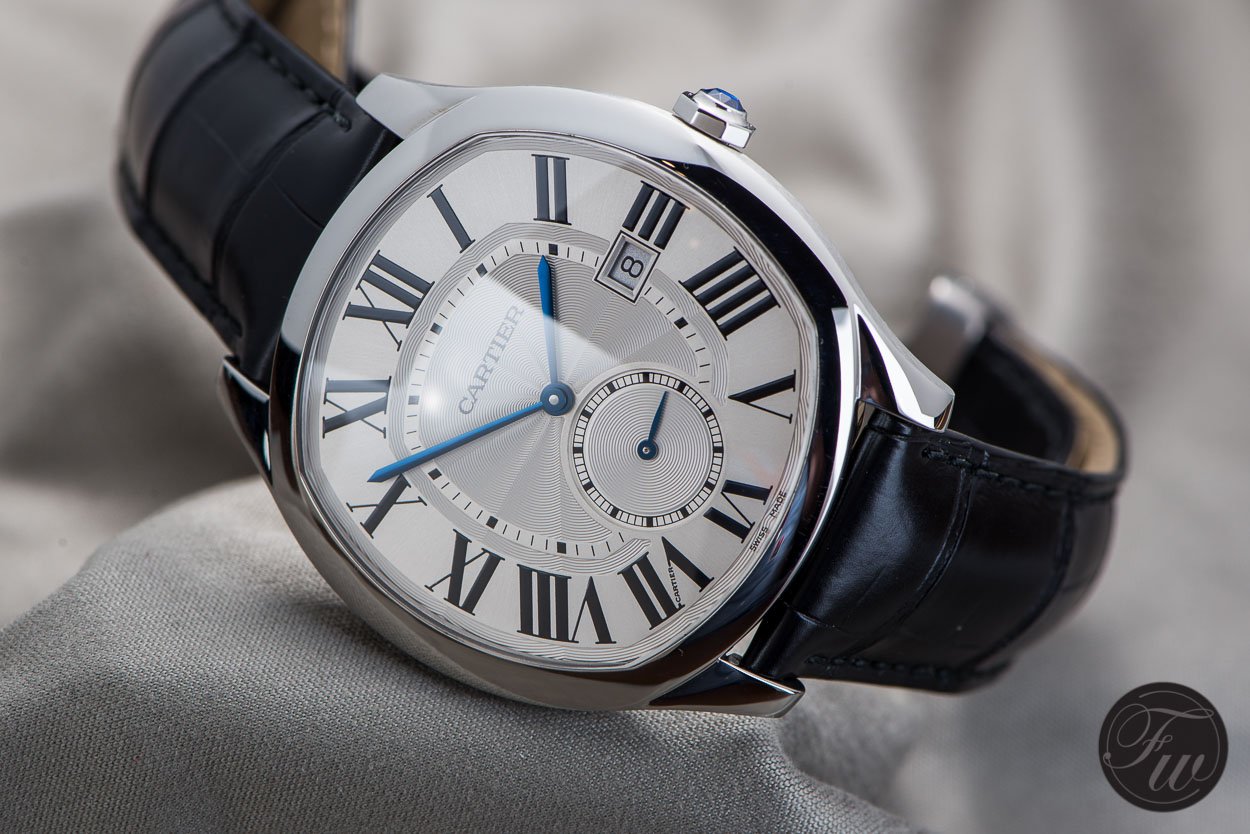 It is clear that the brand is focussing more on the male customers, than ever before. From a design point of view and almost for the first time, Louis Cartier’s early sketches, were not consulted, during the design process of  ‘the Drive’. Instead, well-known and established shapes became the inspiration for the designers to come to models like the ‘Clé de Cartier’ and to the new ‘Drive de Cartier’. Nothing wrong with that, since the brand’s signature; the blued sword hands, guilloché dial and Roman numerals, were kept and still make these timepieces unmistakable Cartier! 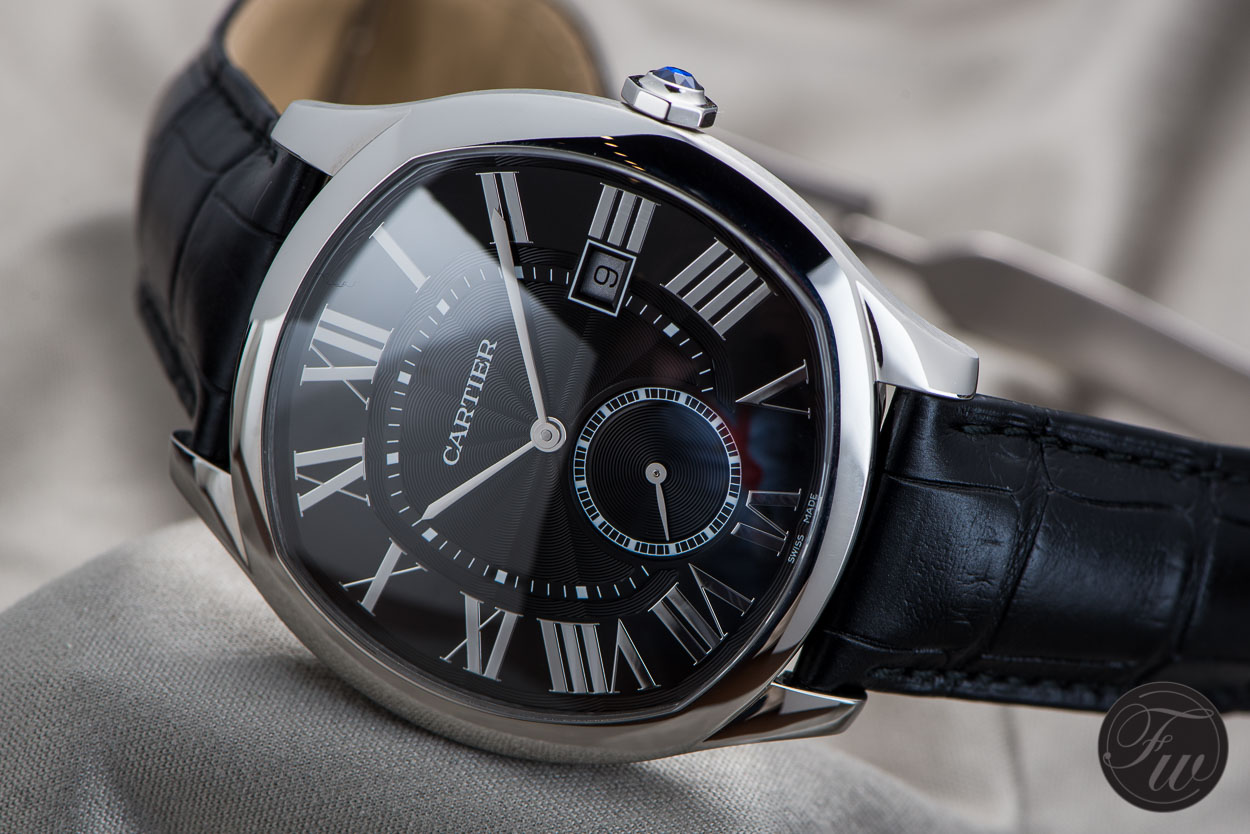 This new masculine line, with traces to the world of sporty cars, was presented at the SIHH in Geneva in January. The patterning of the guilloché dial, for instance, resembles the design of a radiator grill, while the sub-seconds at 6 o’clock, breathes the atmosphere of motor cars. While the design of the Drive case may not be that original (I guess we were spoiled over the years with Cartier’s designs), Cartier succeeded in presenting an elegant and very masculine watch, also created for consumers, that may not have looked before at Cartier’s offerings. A detail that needs to be mentioned is the domed crystal on all models. Since the crystal is a bit domed it does give some reflection, especially in bright day light. 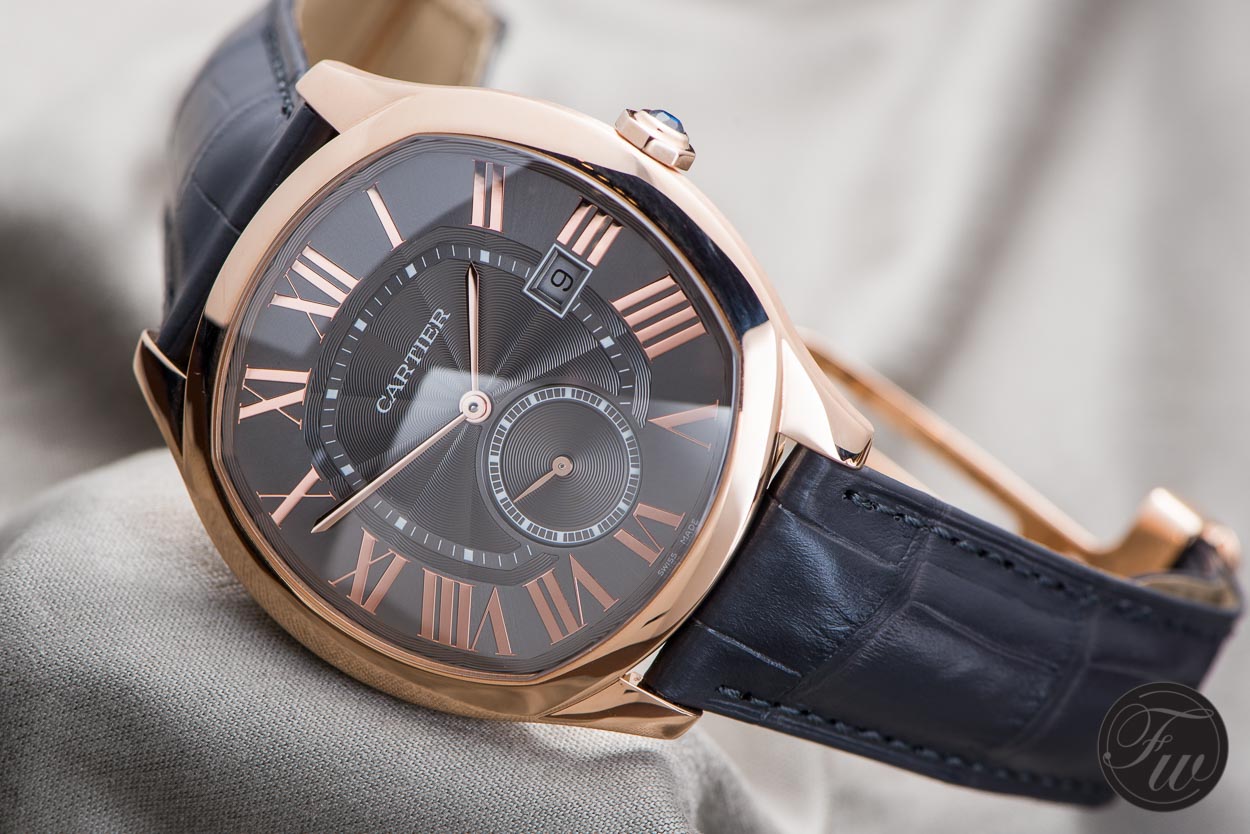 All three models have the same case dimensions and if 40mm sounds small to you, I would recommend seeing it in the flesh. A square watch wears bigger than a round one and this 40mm is a size that, I would say, is ideal for most wrists.

Front runner of the new line, that for now consists of three different models, is the attractive ‘time-only’ model, that’s housed in the new 40mm pillow or cushion shaped case. Please don’t call it a tonneau, because that’s not what it is. The polishedtop- and brushed sides of the case, in combination with the cream guilloché dial and blued hands, complete the typical image the consumer has, when a Cartier time pieces comes to mind. The cheap cut-out for the date complication spoils a lot unfortunately, but it will probably still  find enough support among men, looking for a discreet, masculine business watch.

Personally I would have preferred a pointer date, in the sub dial, that would have been more stylish and would have matched the style of the watch better. Cartier’s first automatic and ‘in-house’ developed caliber, 1904MC, is visible as the 1904-PS MC  (PS stands for small seconds) through the sapphire display back making the reverse-side of the watch very attractive.

The Drive de Cartier ‘Time Only’ is available in steel with a cream coloured- or black dial, or with the stunning grey dial and pink gold case. The fact that Cartier decided to release the steel models, along with the pink gold versions, was a real surprise to me and an even bigger surprise is the very affordable price. The new steel ‘Drive de Cartier’ will set you back just Euro 5950.- inc. sales tax and will be available in April!

When there is a bit more money to spend, the ‘Drive de Cartier Large date, Retrograde Second Time Zone and Day/Night Indicator’ will give you a same style watch, also housed in the new 40mm pillow or cushion case, but with a dial to write home about. The well-balanced Grande date, placed at 12, the very nicely colored Day & Night indicator, located at 4 and the unusual retrograde second time zone indicator, located at 10 o’clock, make the dial very eye-catching and functional at the same time. A sweep-seconds would have made a dial layout like this a bit restless, so the attractive sub seconds of the 1904-PS MC caliber, certainly helps to make this watch look damn good! The automatic 1904MC caliber, that has been equipped with a module for the second time zone display, now listens to the name 1904 FU-MC. This complicated model of ‘The Drive’ will be available in steel with cream dial, or in pink gold with slate grey- or cream coloured dial. 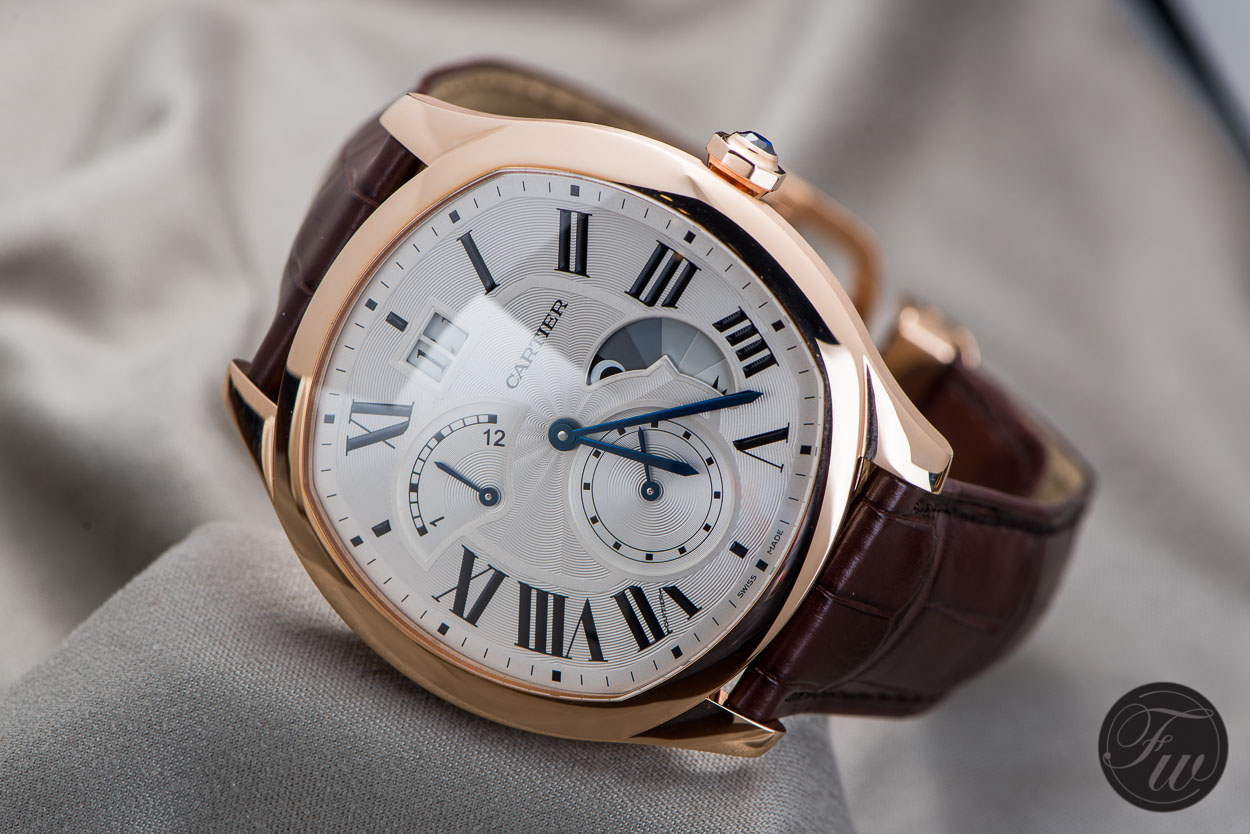 Top of the line-up is, without any doubt, the ‘Drive de Cartier’ flying tourbillon watch in 18-carat pink gold and powered by the 9452MC caliber. This caliber isn’t new but was launched for the first time in 2007, in a Ballon Bleu case, just before the Fine Watch Making-line was presented at the SIHH. Later on, this movement was also used for the Santos 100, Calibre and Tank Americain Flying Tourbillon and many others. So during the last 8 years, this in-house caliber with manual winding, that bears the “Poinçon de Genève” seal, has won its spurs! For the dial Cartier used the layered cut-out version, well known from the other models in the Fine Watch Making-line. 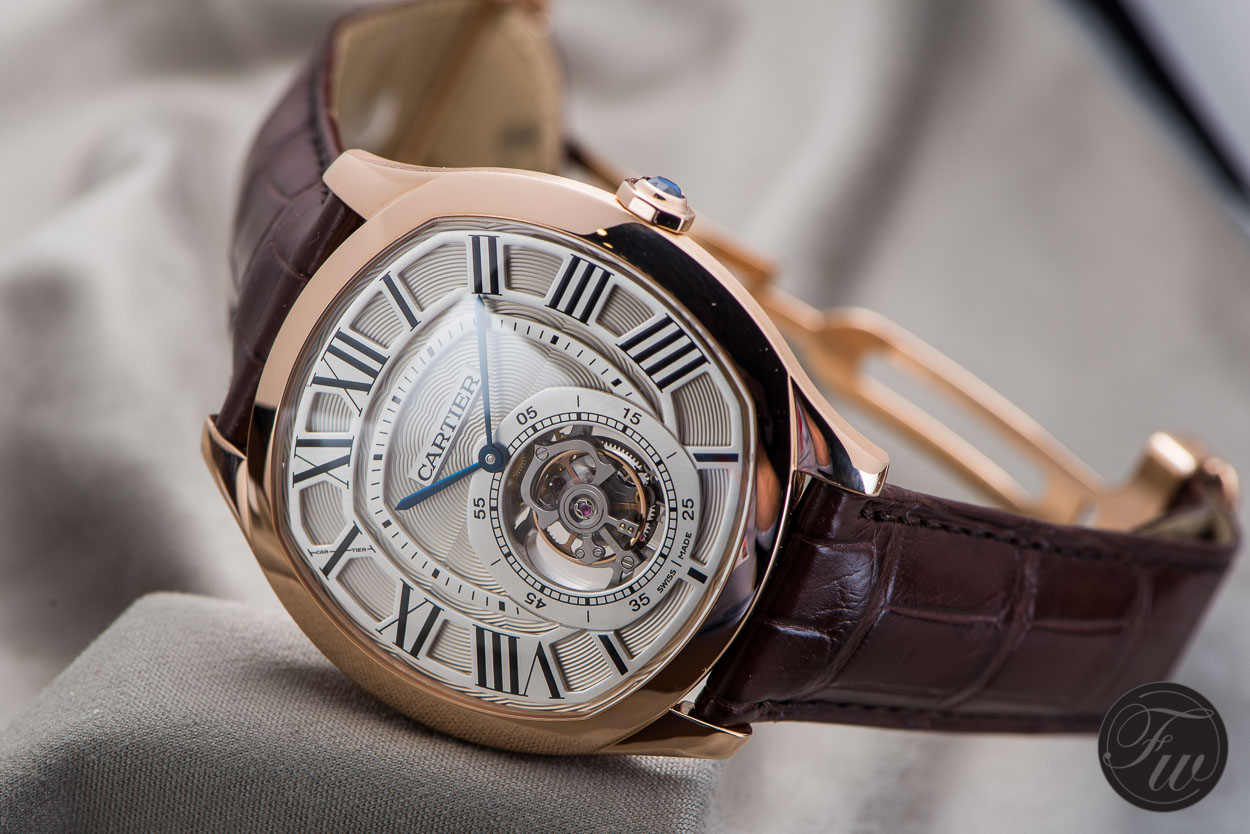 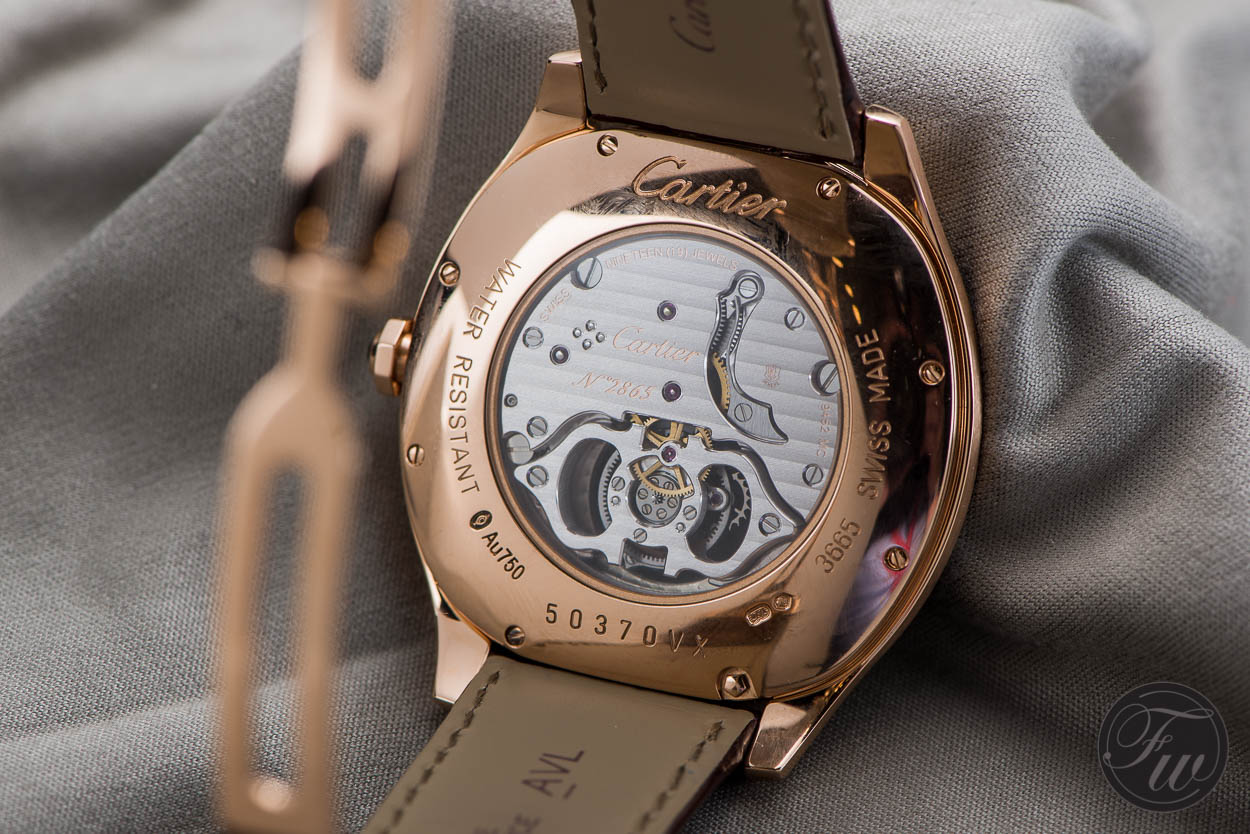 When I saw these watches it was clear that the case of the ‘Drive de Cartier’ lends itself for almost any caliber and I am sure, that we will see more complications next year, in this new ‘men only’ series. Because that’s what it is, no matter which of the three models we look at, no other Cartier model, from the current collection, gives a more self-assured image, when seen on the wrist, than this ‘Drive de Cartier‘.