Six years ago, in 2015, Edox decided to bring back the Hydro-Sub on the model’s 50th anniversary. RJ covered the original limited edition release back then. If you’re familiar with the limited edition, or the short production run of Hydro-Sub models which followed, you’ll know that they weren’t exactly a faithful reissue. Instead of bringing back the original, Edox decided to modernize its design, bringing the case size up to 46mm. Another questionable decision was to add a clunky crown-lock system to the side of the case. Despite these rather odd design choices, the watch gathered somewhat of a cult following. But if you’re more of a traditionalist, you need not fear. Edox is back with the reissue that should have been.

The Edox Hydro-Sub that I had on my wrist for the last week is far more faithful to the original Hydro-Sub from the mid-’60s. It has also lost a few pounds, and a couple of millimeters around the wrist compared to the 50th-anniversary model. Orange, blue, and white, it’s a charmingly quirky, vintage-inspired dive watch a little something sprinkled on top. No, not crushed nuts or rainbow sprinkles, but instead, 300 meters of water resistance, chronometer certification, and a delightfully thin bracelet. It’s not all perfect, as I still have one or two quibbles with the watch, but at first glance, it’s a massive step in the right direction. 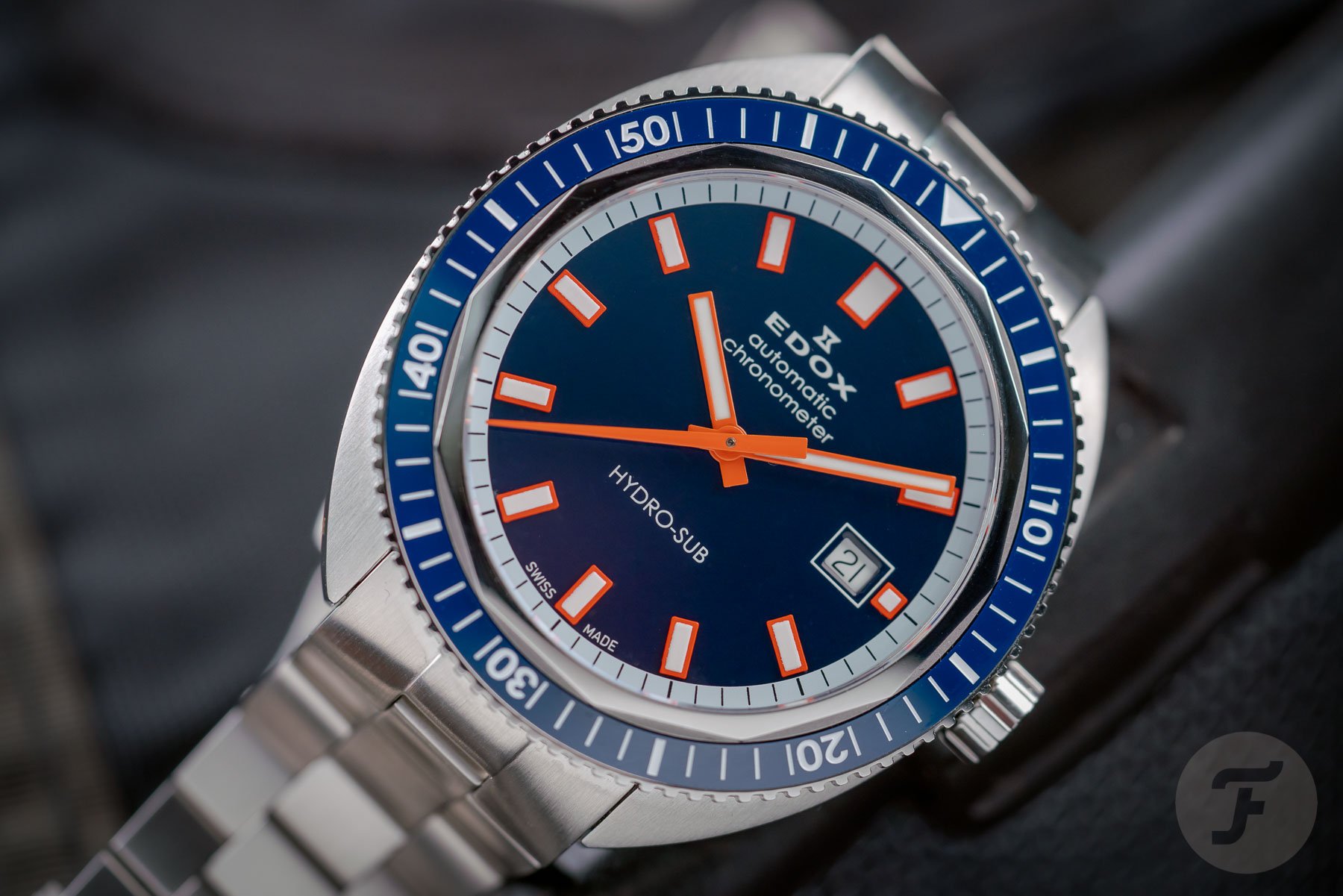 The good and the bad

That’s right, I’m only going to talk about the good and the bad here. As far as I’m concerned, there’s nothing ugly to be found, so I’ll just dive right in with a handful of “good.” The new Edox Hydro-Sub is an absolute stunner. I was surprised to hear that the original Hydro-Sub dated way back to the mid-1960s. To me, the bright orange accents and tapered seconds hand scream ’70s styling. The appeal of the skin diver (words engraved on the original’s case back) is undeniable, and I’d love to see it on a perforated tropic rubber strap. Size-wise, the reissued Edox is 1mm smaller than the original (pictured below), according to the limited information available.

As far as “bad” is concerned, we have to look behind the watch. Keep in mind, neither of these points are dealbreakers, but I felt it worthwhile to mention them. 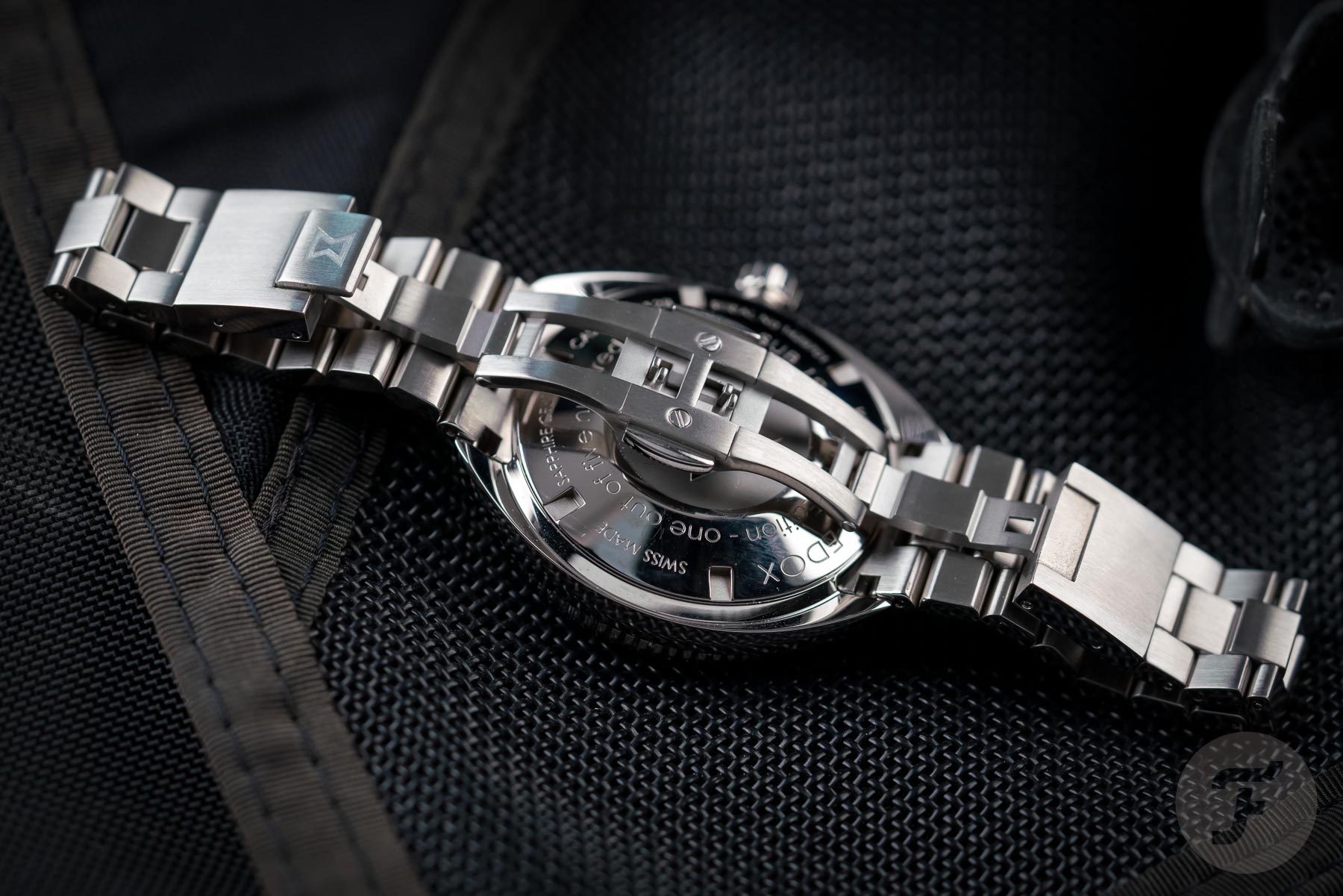 My only two points of contention with this watch are the clasp and the case back. Let’s start with the case back, where my issue can’t be seen, but it sure can be felt. Visually speaking, the case back gets full marks. It has the exact shape of the original, with a wide sloping domed shape and six notches for the opening tool. In the center, you’ll find a matte circle with a debossed Edox hourglass logo. But when handling the watch, your fingertips will be met by the logo’s extremely sharp edges. For anyone who has more sensitive skin, this could potentially put a damper on the wearing experience.

When it comes to the clasp, part of me hates that it’s a dual-deployant system with an overlapping element on one side. This means it can only be shut in the correct order. It does have a dive extension, which makes sense, but I still would have loved to see a more standard milled clasp with an added fold-over safety lock. 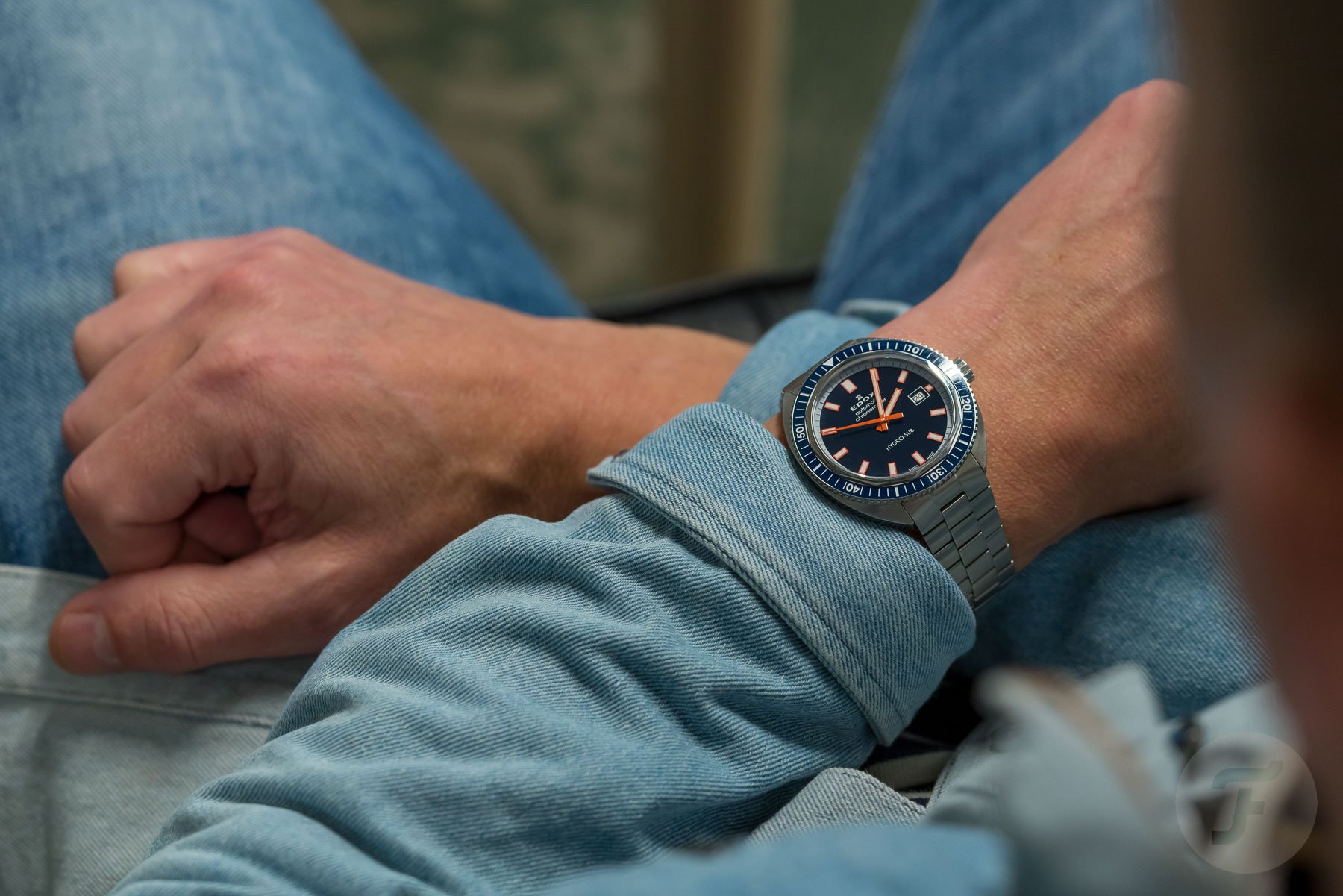 So, what exactly is the Edox Hydro-Sub 1965 limited edition? Is it redemption in the form of a beautifully reissued piece of the brand’s history? Absolutely. I think that this Hydro-Sub 1965 is a result of a recent change of pace from the brand. Keep an eye out later this week for an article from Lex on the stunning new SkyDiver LE models.

These dive watches show a degree of understanding of what works today, as well as the refinement and maturity of a brand that’s been around as long as Edox has. This translates to the watch in a number of ways. The biggest one is the consistency to which Edox brought back the original, subtly improving on its design and features. 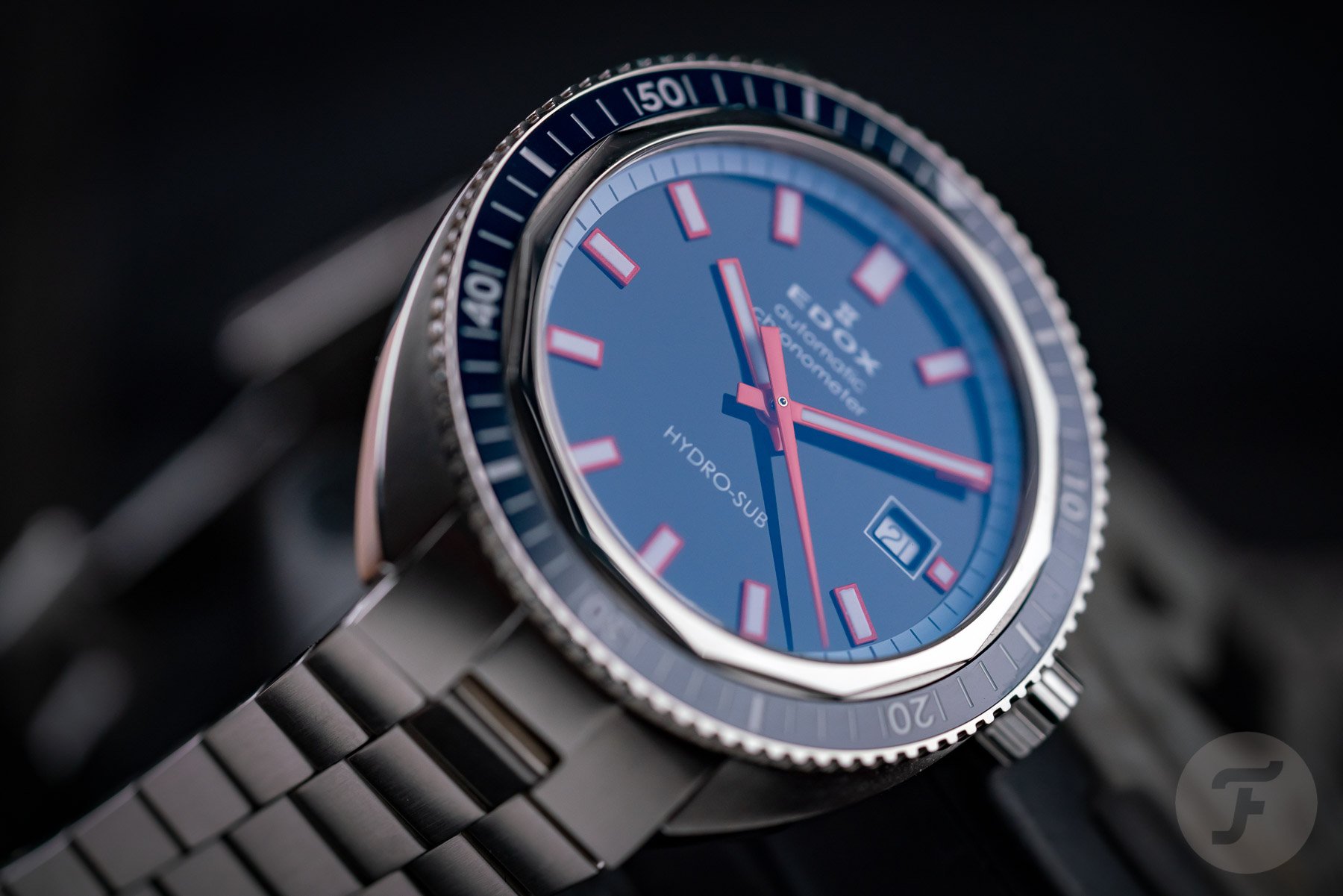 The deep blue dial has an almost purple hue but tends to turn black in low-light conditions. Like colorful rafts at the edge of a deep pool, generously lumed hour markers encircle the dial, standing proud of it ever so slightly. The rectangular hands match the markers perfectly, almost like an extension of their basic design. The very retro triangular seconds hand tapers from a broad counterpoise, past the pinion to a sharp tip. A date window at 3 o’clock, true to the original, has a white frame instead of an orange one. I like it, as it matches the white outer minute track on the subtly raised rehaut.

A double-AR-coated flat sapphire crystal keeps this watch nice and slim, at only 12.5mm tall. Between the crystal and ceramic bezel insert lies a faceted steel ring. Serving no function other than to add character, it’s a nice nod to the original design. 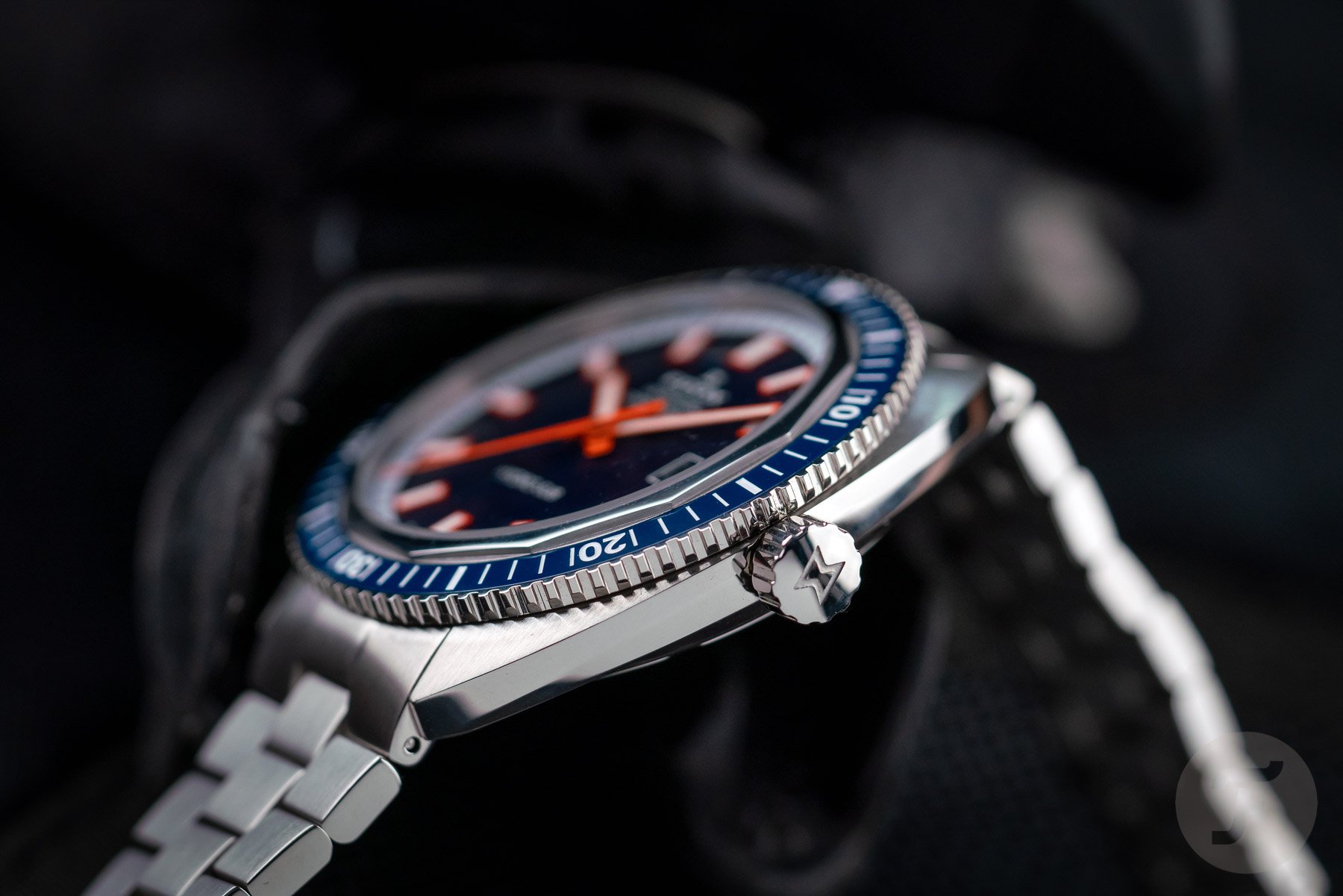 Brilliant inside and out

What is a dive watch without a great dive bezel? I’ll let you answer that one yourself. For me, it’s the first thing I check whenever a new dive watch makes its way into Fratello HQ. The results are often shocking, with watches well into the luxury four/five-figure spectrum having underperformed when compared to cheap and cheerful offerings from microbrands. So how does the bezel on the Edox perform? Pretty darn well, actually. Its thin edges are perfectly grippy, the action is solid all throughout the 120-click rotation. There is little to no back-play, and though it turns with relative ease, it never feels like it isn’t secure. This bezel, coupled with the slim, streamlined 42mm case makes for a pretty sweet combination. 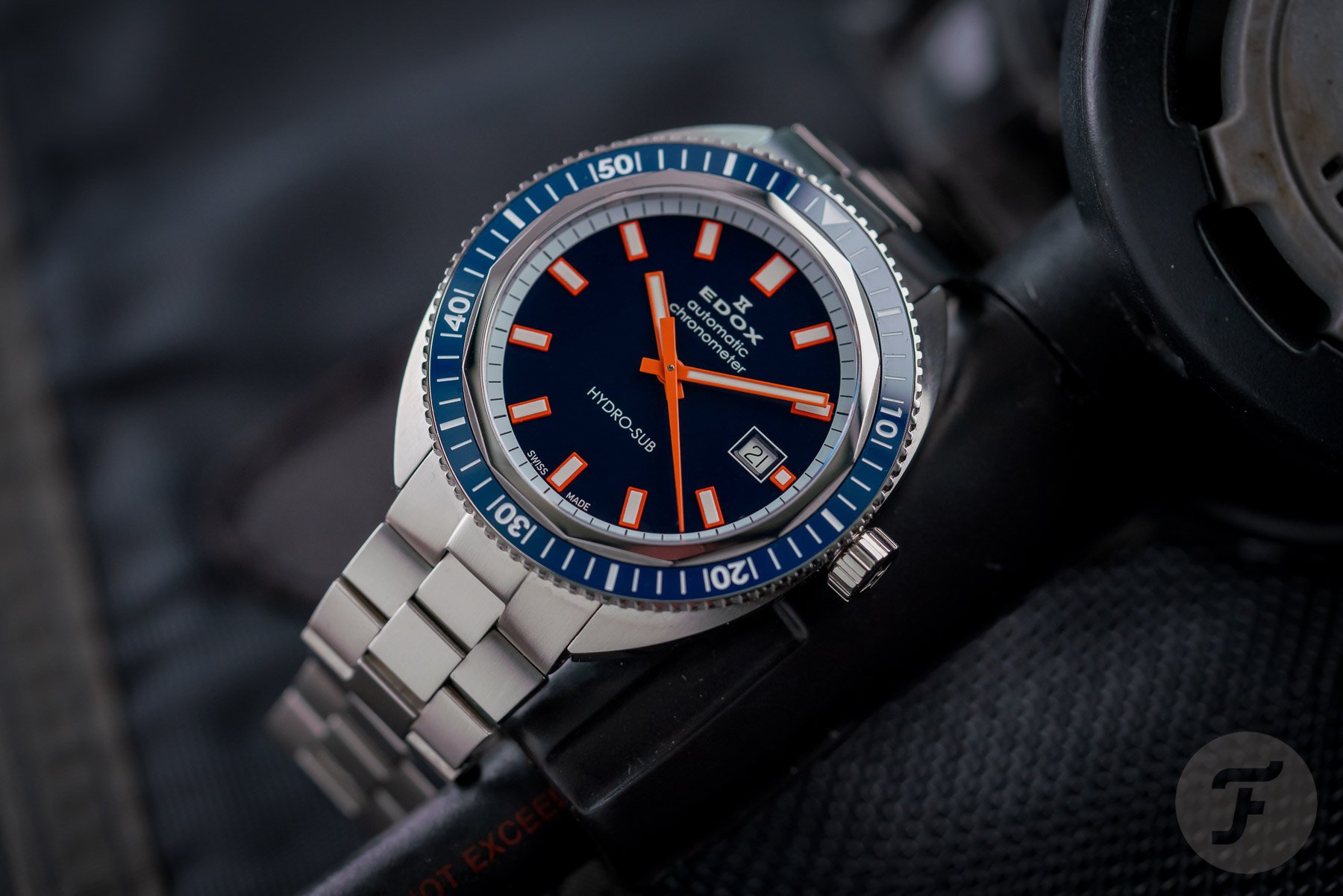 The goodness doesn’t stop there. Inside the watch, as announced by the extra line of text below the brand on the dial, is the chronometer-certified Edox caliber 806. In essence, it’s a Sellita SW200 certified to COSC standards. I’m always pleasantly surprised by the reliability and timekeeping abilities of the SW200. It’s a brilliant movement used by microbrands and large brands alike.

There’s something very reassuring about a movement becoming so popular. It promises long-term serviceability and availability of parts. In times of in-house movements garnering limitless hype, I, for one, am a Sellita SW200 fan. That being said, I believe that Edox made the right call in maintaining the original’s closed case back. A proper dive watch with 300 meters of water resistance at this price point deserves a proper steel back.

I feel the Edox Hydro-Sub has the potential to place the brand into a very exciting section of the watch market. But will Edox be bumping elbows with Doxa and Aquastar in the quirky vintage-inspired dive watch club? The Hydro-Sub 1965 gives Edox a perfectly good chance, especially at the €1,790 price point. But only time will tell. For now, Edox will make only 500 pieces, just to give the watch world a bit of a taste of what it can do when it sets its mind to it. I just hope the brand launches a full-production model at some point, even in the alternative orange and black colorway. 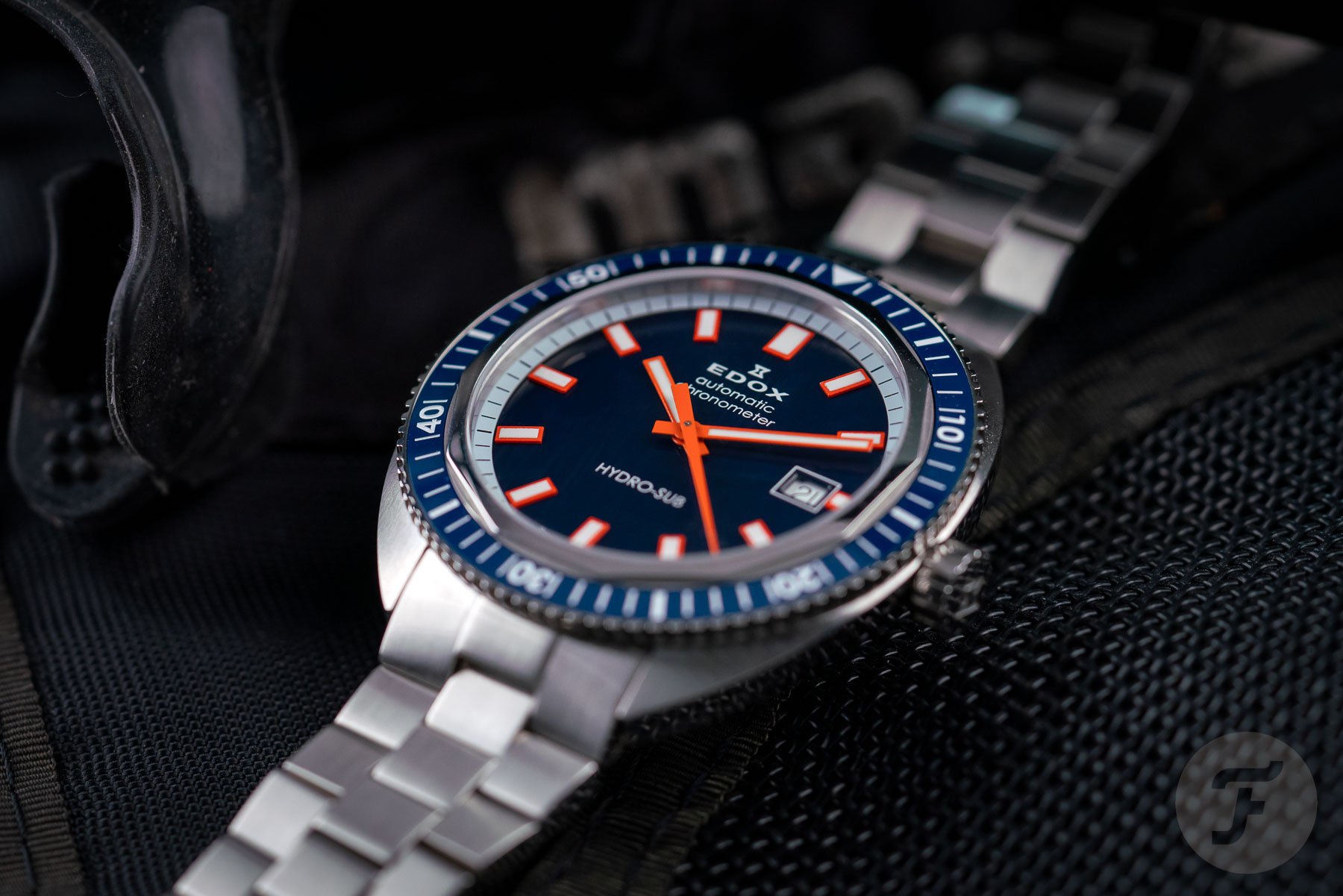 What do you think of the Edox Hydro-Sub 1965 LE? Are you intrigued by its charming vintage vibes? I know that it does the trick for me, but I’d love to hear your thoughts in the comments down below. And as always, for more information on the watch, check out the Edox website here.