Women’s watches, men’s watches. Gender draws design lines in the sand that can be difficult to cross, if one even wants to. I prefer watches not to be gendered at all, and I think we’re seeing the beginnings of a shift towards that with some brands. But within watches that are still firmly labeled for and marketed to the feminine, I’ve found a few that I appreciate. Not every watch I like needs to be a tool watch. In the case of the Citizen Calendrier for women, it’s more capable than some of the “men’s” watches I own, and it looks quite good being so.

I have to admit, I’m biased: I chose this watch for my girlfriend over a year ago. I don’t know now whether I picked it because I liked it more than any other, or if I like it because it’s now the watch she owns and wears. Truth be told, I’m not normally a fan of Citizen watches. The closest I’ve come to wanting a Citizen watch is with the JDM “The Citizen” Eco-Drive solar quartz with Tosa Washi paper dial (ref. AQ4020-54Y). But as far as a versatile, elegant feminine watch is concerned (with a moonphase complication — very important), Citizen beats every other option within a certain budget. 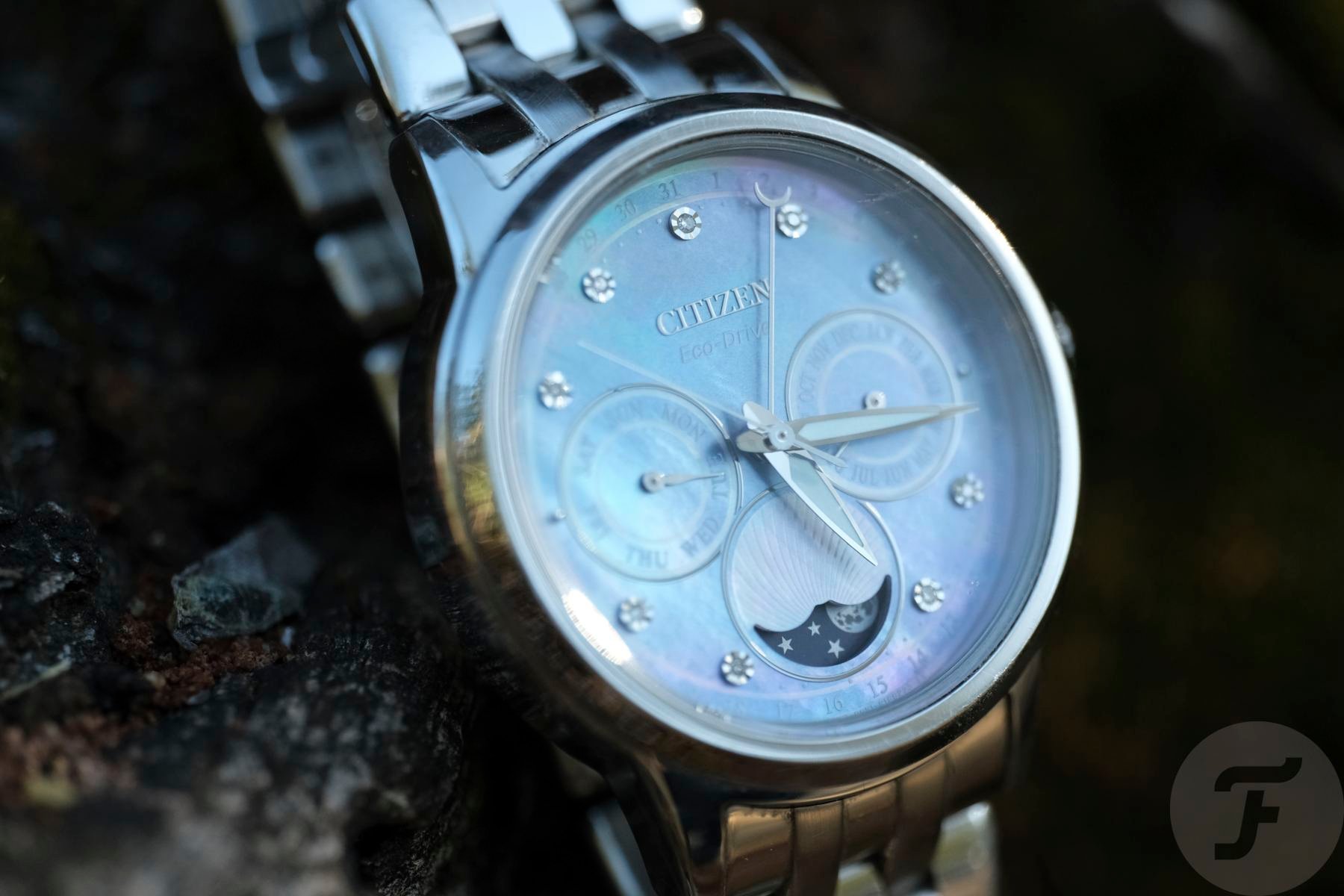 If there’s one thing that Citizen does well (though the brand actually does many things quite well), it’s packing a ton of functionality into relatively affordable watches. That’s the uber-efficiency of Japanese engineering and industry for you. Usually, we see the best examples of this with Citizen’s men’s tool watches, like the Promaster Skyhawk. But thankfully, the women’s Calendrier packs a lot under a small case and a single crown.

Stemming from the central cluster of hands is an hour, minute, and seconds hand as well as a date pointer with an elegant crescent tip. The minute and hour hands are lumed in blue and are as bright as any Seiko I’ve seen — a checkmark for practicality. The three sub-dials indicate the month, moonphase, and day of the week at 3, 6, and 9 o’clock respectively. It’s a full calendar, though not complicated or connected enough to be perpetual. As such, months with less than 31 days require adjusting.

All of this is powered by one of Citizen’s solar-powered Eco-Drive movements, the 8651. Only 12 hours of direct sunlight stores 6 months’ worth of power, though the Calendrier can charge from any light source. Light passes through the mother-of-pearl dial to the solar cell directly beneath. 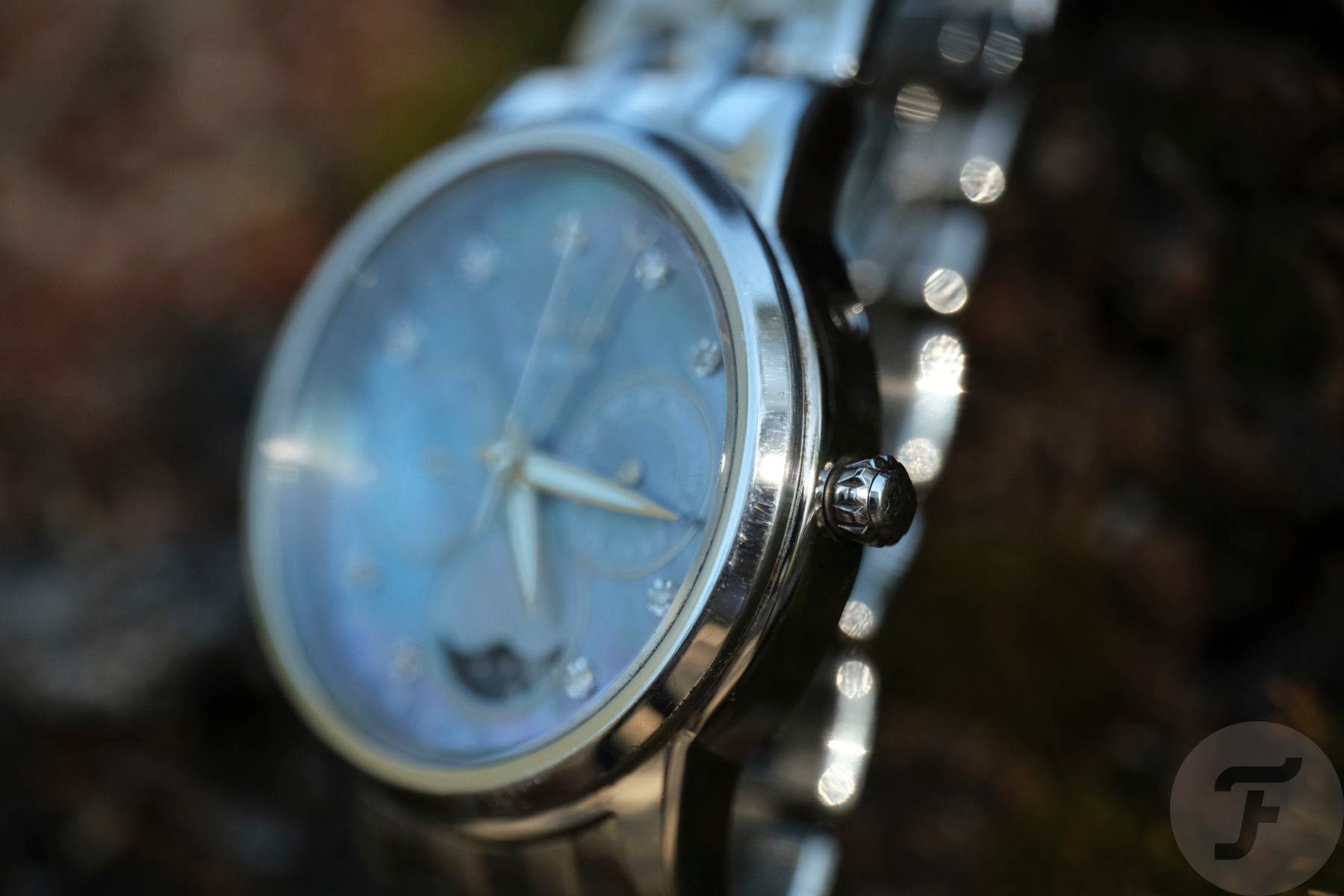 An impressive case as well

Now, a full-calendar watch for ladies is a premium feature, even if it’s quartz-driven. We’ll get to why it’s especially so for my girlfriend in a bit. But the 37mm case provides a ruggedness not typically expected of ladies’ watches or traditional dress-watch complications. The stainless steel case is water resistant to 100 meters, and a matching 19mm steel bracelet sets this watch up for swimming, no problem. The bracelet can be switched out easily enough to a fancier, less water-ready leather strap if need be. A butterfly clasp and push/pull crown without guards reduces some security, but I guess that’s the price for dainty styling…

The crystal is of the mineral variety. My girlfriend has owned and worn the watch for a year. I assured her when I gave it to her that it could keep up with her, her work, and her lifestyle. Visible in the pictures are scrapes on the case and scratches on the crystal that show her trust in the watch.

Why the Citizen Calendrier is the perfect watch (for some)

I very much enjoy shopping for watches, both for myself and others. I put myself and the potential choices through a whole evaluation process, doing my utmost to match the best watch to its intended application or recipient. Shopping for a watch for my girlfriend was no different.

I had quite a few requirements, to begin with. My girlfriend is not a watch person — or at least she wasn’t when I got her this one. She also leads an active outdoor lifestyle, both in her recreation and work. It was important that whatever watch I got her was simple and tough. I also wanted something with a mother-of-pearl dial and a moonphase. And so the hunt began.

I actually came across a few options. Certina had an automatic watch with a MOP dial and a moonphase that looked good. But I knew my girlfriend wouldn’t be too keen on setting the watch every time she let the power reserve run down. Once I landed on the Calendrier, that was it.

A complicated watch for people who need simplicity

I know a moonphase and full calendar don’t seem simple at first glance. Solar-powered quartz, however, makes it so. The Calendrier is as easy as setting it and forgetting it, at least until the date needs to be adjusted once every two months… in which case, my girlfriend brings the watch to me. Oh well, maybe she’ll find the joy of tinkering with watches down the line.

My girlfriend is self-employed. A lot of her work is outdoors, but no matter the setting, she answers only to herself and sets her own schedule. It’s no surprise that she’s notoriously terrible at remembering what the date is… or the day of the week. In fact, she’s gotten whole months wrong before. But I don’t begrudge her because I know she’s operating outside of the world of meetings and deadlines except those she sets for herself. But when she did need to know these things and didn’t have her phone on hand, she was at the mercy of her memory or those possibly around her that keep better track of them. That is no longer the case with the Calendrier, though I have caught her asking me the date out of habit with the watch on her wrist.

Even before she received the Calendrier, she had an almost internalized knowledge of the moon phases. It’s funny that the one complication I was intent on having she had the least need for. But she thoroughly appreciates it. For someone that loves the Moon, the stars, and the great outdoors, a moonphase indicator is a joy. 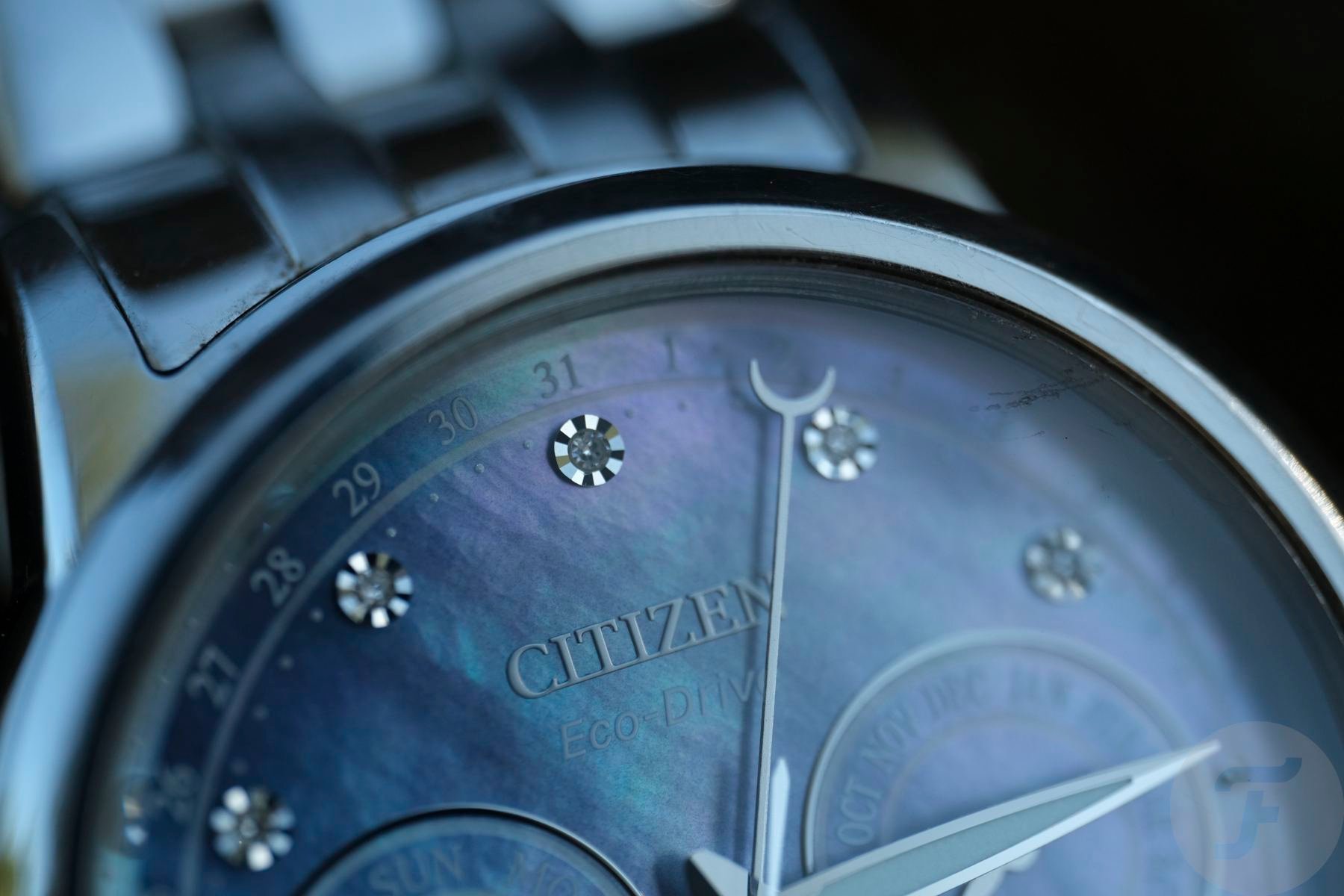 And so the Citizen Calendrier ends up being a little watch that does a lot. The wearer can go from water to wine social without missing a beat. Or the watch can be ignored for days or weeks at a time, no problem. It’s still ticking away. It can swim, it can work, and it looks wonderful doing so. In fact, the MOP becomes a veritable chameleon in different lighting. I declare the Citizen Calendrier a feminine GADA (Go Anywhere, Do Anything) without hesitation. Will I ever borrow it to wear, as my girlfriend sometimes does with my watches? I don’t know… yet. But this is the closest any pretty women’s watch has come to inspiring me to throw it on a NATO and go camping.

The little details are just icing on the cake. Turns out the center of the hour markers are real diamonds, though tiny. The sub-dial of the moonphase features a shell motif that elegantly makes use of the space. Lumed hands are a practical feature that more “pretty” watches should have, in my honest opinion.

For a woman who could care less about escapements and mainsprings, the Calendrier is the clear winner.

And you can’t beat the price. A few weeks ago, I scrolled past a women’s Vacheron Constantin in my feed. My girlfriend said, “Oh, that looks like my watch!” And so it did. Blue mother-of-pearl dial? Check. Moonphase? Check. Full calendar? Check. Oh, and diamonds? Double check. The price? A cool $87,500. Now, with 30 meters of water resistance (and that price), it’s not getting anywhere near water. At $340, the Citizen Calendrier has all that and can swim. Oh, and it doesn’t need to be wound. For a woman who could care less about escapements and mainsprings, the Calendrier is the clear winner. Keep your $87,160 and take her out to a nice dinner. That’s what I did.

You can find more information about the Calendrier and the other capable Citizen watches on the brand’s official website. What are your favorite feminine watches? For those who shop and wear feminine watches, what’s missing from the industry? Let us know in the comments below.

You can find more of me on Instagram @watchingthomas.