Fortis is a name known equally to fans of aviation and/or watches. The Grenchen-based brand has been involved with air squadrons and space flights for decades. Today, however, it is releasing a watch that might reach beyond the ISS theoretically speaking. How come? Well, the new Fortis Official Cosmonauts Chronograph AMADEE-20 is, in a pretty direct way, part of the Mars exploration project.

To be precise, it is the official timepiece of the AMADEE-20 Mars simulation mission. As such, the operation of this Fortis timepiece might directly impact and support the human race on their way to Mars.

Later this year, the Austrian Space Forum will be conducting an integrated Mars analog field mission in the Negev Desert. Hosted by the Israeli Space Agency, during this four-week period, analog astronauts with spacesuit simulators will undertake various tasks. This will include experiments to prepare future human and robotic Mars exploration missions. This small, highly trained field crew of six astronauts will emulate various aspects of a human Mars mission in the Ramon Crater.

The AMADEE-20 mission aims to study equipment behavior and develop platforms for testing life-detection and geoscientific techniques, among other things.

Thanks to the partnership between The Austrian Space Forum and Fortis, the brand will be supporting the crew with its new Fortis Official Cosmonauts Chronograph AMADEE-20. Both in Israel and the Mission Support Center in Innsbruck, Austria, the project members will sport the new Fortis AMADEE-20 equipped with designated functions. 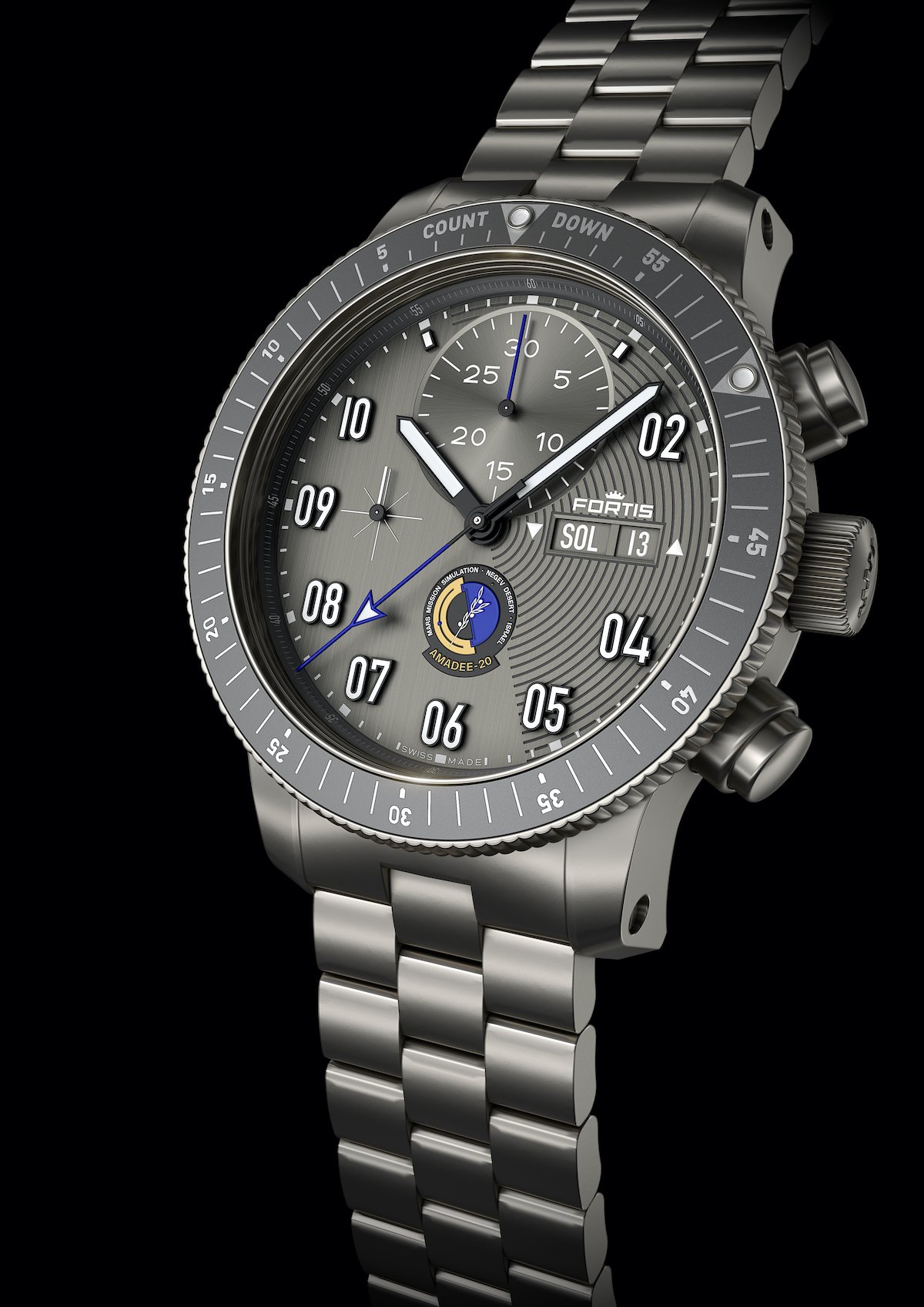 The new Fortis Official Cosmonauts Chronograph AMADEE-20 is the latest in this model range packed with features such as the Mission Control Bezel or the Hook Strap. A massive 44mm sandblasted case and case back crafted from titanium ensure that the watch will be light and comfortable despite its large size. In addition, a fitting titanium Mission Control Bezel with two lume pips surrounds the dial. One is at 12 framed by the words “mission control,” while a second one can be found 30-degrees to its right, pointing at the 2 o’clock marker while the bezel is “naturally” aligned.

Just like the case, the bracelet is also titanium, but there is a secondary Hook Strap option for this timepiece. That grey fabric strap, decorated with the Fortis wordmark, would be my choice, as I think I’d much prefer to have this large but lightweight case hugged as closely to my wrist as possible. On the case back, there’s an engraving showing us certain planetary bodies such as the Earth, the Moon, and of course, Mars.

Inside the new Fortis Official Cosmonauts Chronograph AMADEE-20 beats the caliber UW-50. The UW-50 is a Valjoux 7750-base movement. This automatic mechanical chronograph caliber has unidirectional winding, 48 hours of power reserve, a day-date display, and a chronograph function. Some of you might remember the brand’s previous collaboration with the Austrian Space Forum. That watch, the Fortis Official Cosmonauts Chronograph AMADEE-18, had very similar features. Perhaps unsurprisingly, the same caliber was beating inside that case as well. The aesthetic differences here, though, are vast. This is an icy cool watch overall, and one that really fits the new-age Space race. 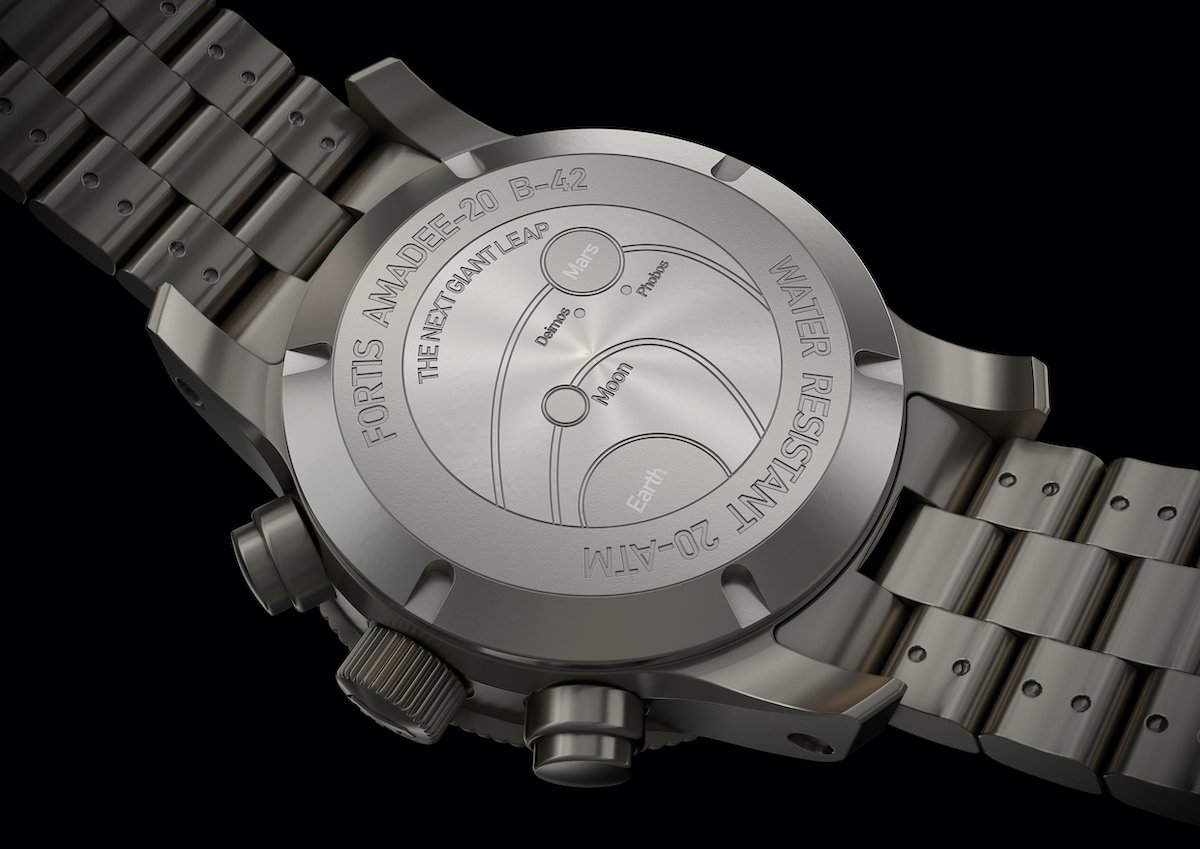 To align the look with the case, the Fortis Official Cosmonauts Chronograph AMADEE-20 has a stardust gray dial. Additionally, there are several different finishes on the face. We have vertical brushing, sunburst patterning on the large 12 o’clock 30-minute counter, and debossed lines from just after minute 56 until just before minute 26.