I must confess, it has been a while since I last wore a Fortis watch. Not that I don’t want to, but we have quite a large team of editors these days, and others jumped on Fortis a bit faster. After having the Fortis Official Cosmonauts Amadee-18 on my wrist for a few days, I’m going to make sure I’m at the front of the queue next time…

I am positively surprised by the Fortis Official Cosmonauts Amadee-18 reference 638.18.91. The first thing to notice is how good this watch looks on the wrist. And that specifications can be so deceiving. According to the spec sheet, the watch measures 44mm in diameter and has a lug-to-lug size of 53mm. Now, before you sigh and stop reading, hear me out.

I don’t have small wrists (18cm) but they’re not too big either, and this 44mm watch suits me perfectly. The interesting part is that the bezel measures 44mm in diameter, while the case diameter is 42mm. It is by no means a small watch, but it shouldn’t be either. This watch was meant to be worn by cosmonauts in space. The large bezel, big pushers, and crown are all easy to grasp. With a thickness of 15.5mm, this watch does sit high on the wrist. But again, it makes sense in my opinion. What’s most important is the wearing comfort, and I find that surprisingly good. It is just another example that shows you shouldn’t go blind on specifications. 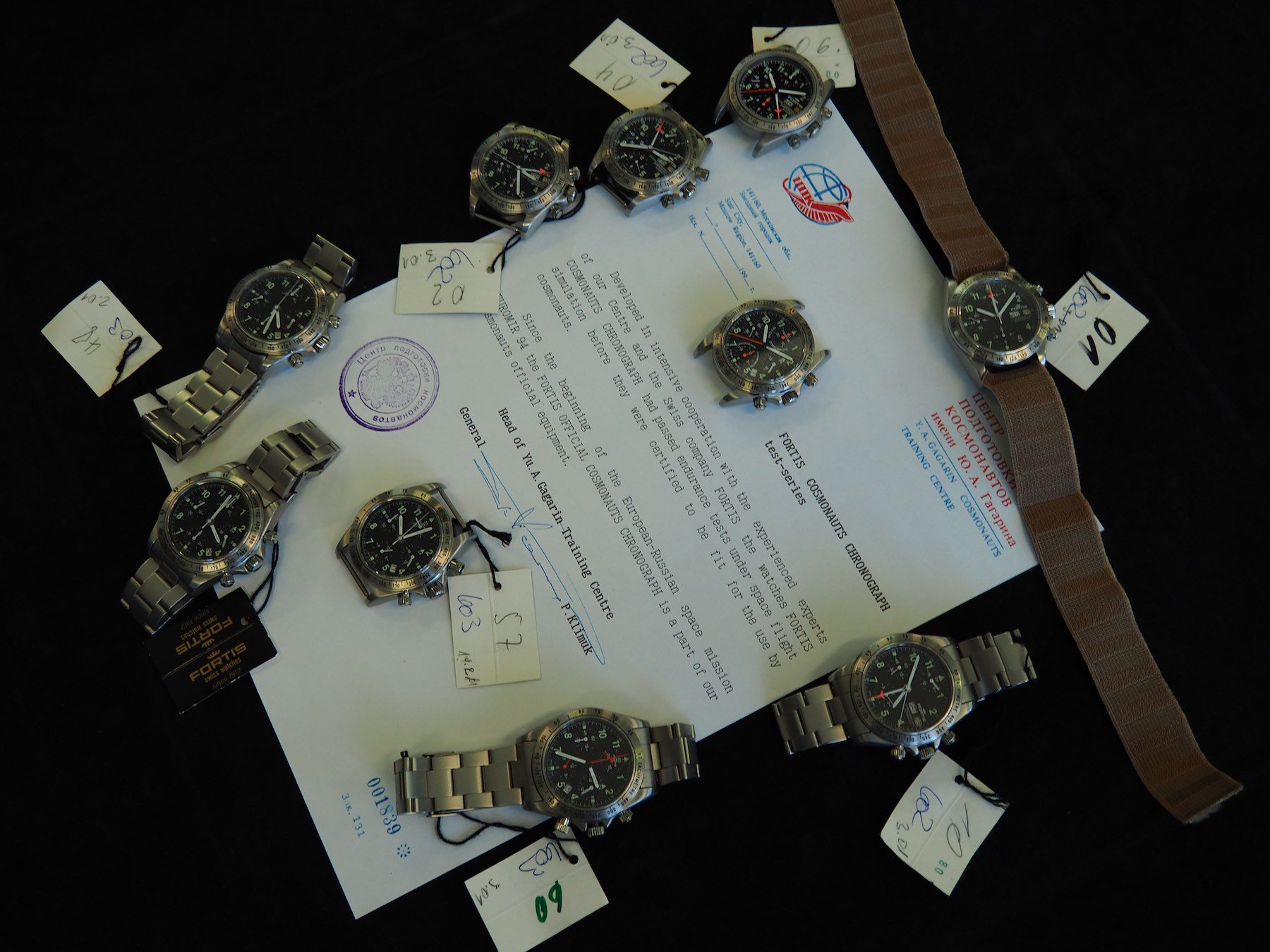 Although I am aware that there’s a certain partnership between the Russian space agency Roscosmos and Fortis since 2001 (and before that, back in 1994, with some Gagarin Cosmonaut Training Center), I can’t find specific details on this partnership. The Fortis Official Cosmonauts Chronograph reference 638.10.11 M is the model that is being given to cosmonauts apparently. However, I had never heard of Amadee-18 before I received this watch for review. Amadee-18 was an initiative by the Austrian Space Forum, to simulate a Mars mission in the Oman desert. This took place in 2018 and they performed several tasks and experiments to simulate parts of a Mars mission. 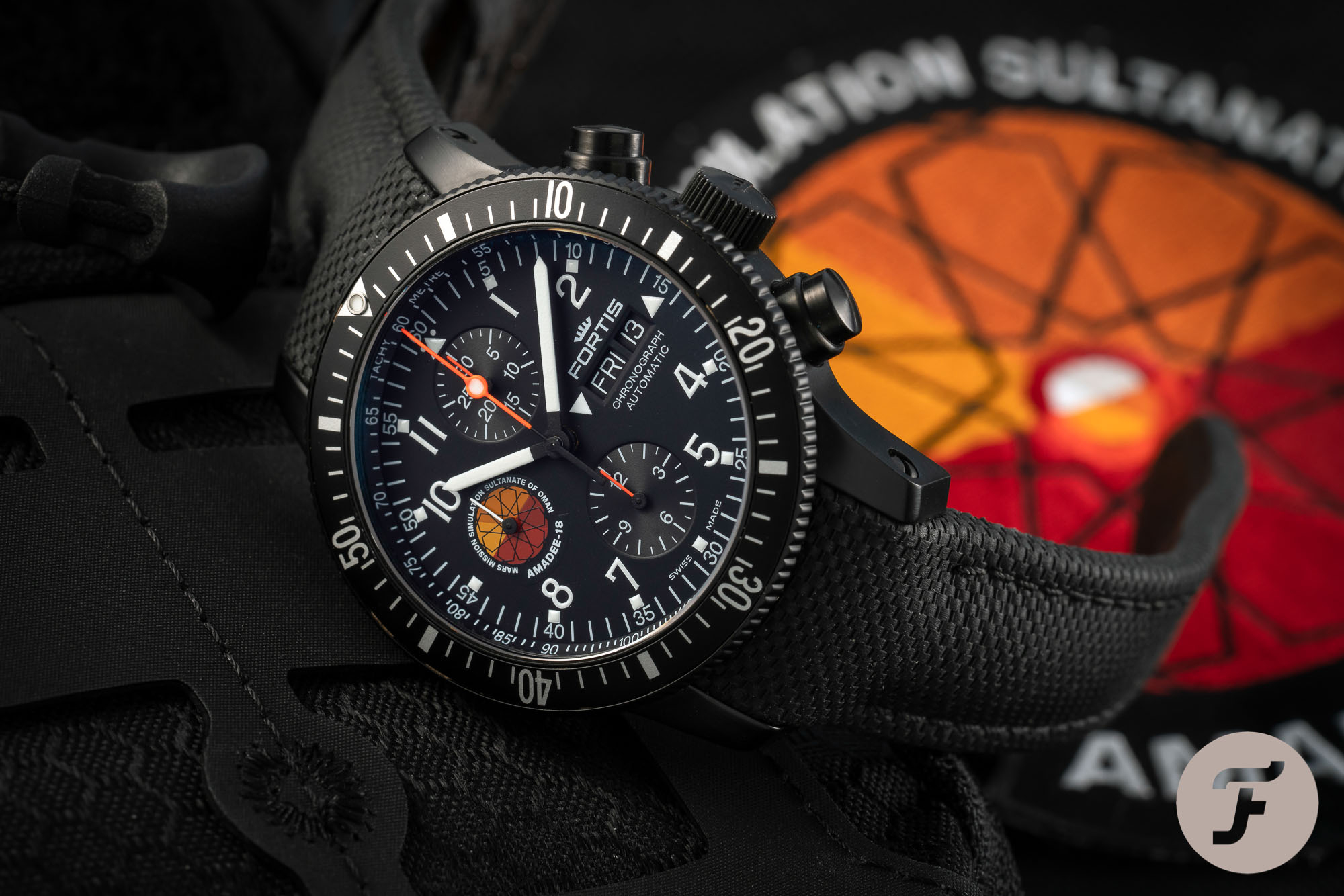 Together with the Austrian Space Forum, Fortis developed a variation on the Fortis Official Cosmonauts watch, for use during the Amadee-18 mission in Oman. It is a black PVD version of the “normal” Fortis Official Cosmonauts watch, but with a special Amadee-18 mission patch on the 9 o’clock subdial. The orange and red represent the sunrises and sunsets on Mars and Earth, the fine-lined pattern within the circle represents the experiment carried out in Oman. As you can see, it looks pretty cool. I love the use of orange and red on black dials. The chronograph hands of the watch have a bright orange color, which feels entirely in-sync with the mission patch. 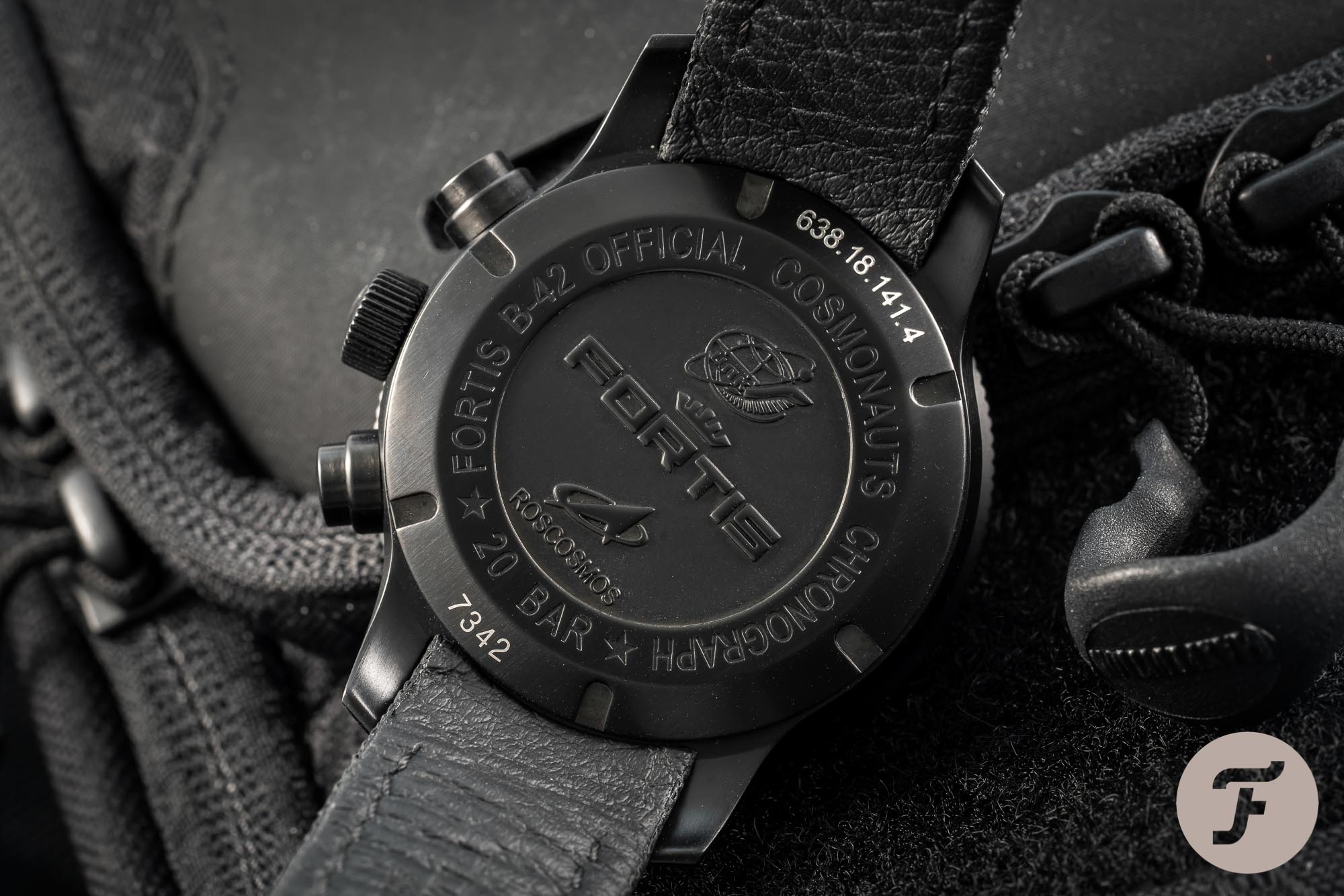 On the backside of the watch, you will find the logo and wordmark of the Roscosmos State Corporation for Space Activities, known as Roscosmos. What I can’t decipher is the reference number on the case back, as it does not match the one on the Fortis website or catalog. The official reference for this watch is 638.18.91 LP.10. Perhaps I am dealing with a sample or prototype for reviews. I prefer cool engravings or embossed logos over a sapphire case back that shows the movement. Unless we are looking at something truly exclusive or Haute Horlogerie, a nice engraving or embossing speaks to me more. 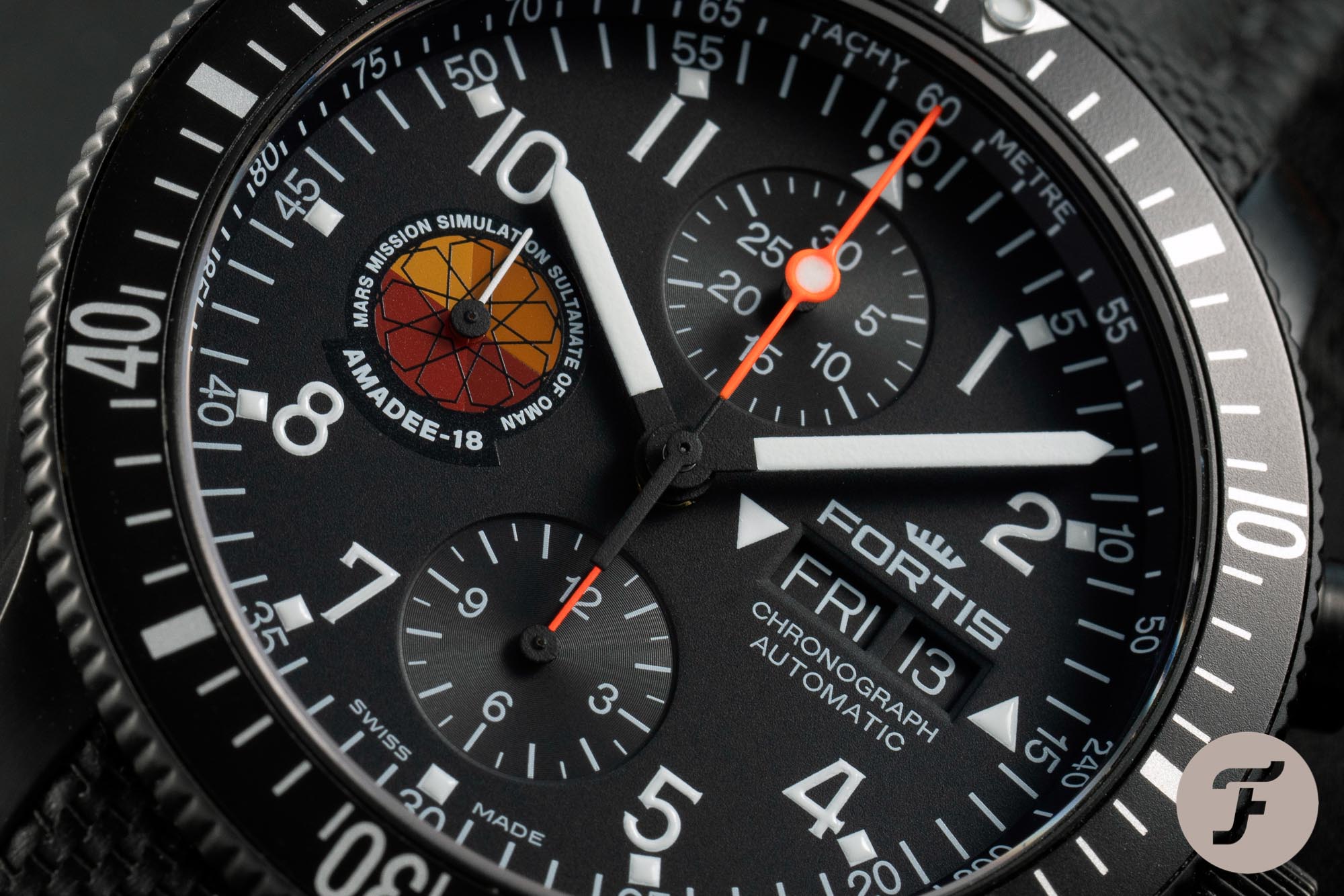 The chronograph movement inside the Fortis Official Cosmonauts Amadee-18 is caliber UW50, a Valjoux 7750 based movement. The dial probably gave that away already. This movement is also easily recognizable when you shake the watch — it only winds in one direction. The other direction results in a free spin and causes that famous Valjoux 7750 wobble. The movement ticks at 28,800vph, and has a power reserve of 48 hours. According to the Fortis website, the UW50 should be bi-directional winding. But I feel (and hear) that it only winds in one direction and has a free spin in the other direction. Either the website is wrong, or I am dealing indeed with a prototype or sample watch that has a different caliber inside (but also Valjoux 7750 based). The day and date discs are black, corresponding with the dial, and the printing is in white. 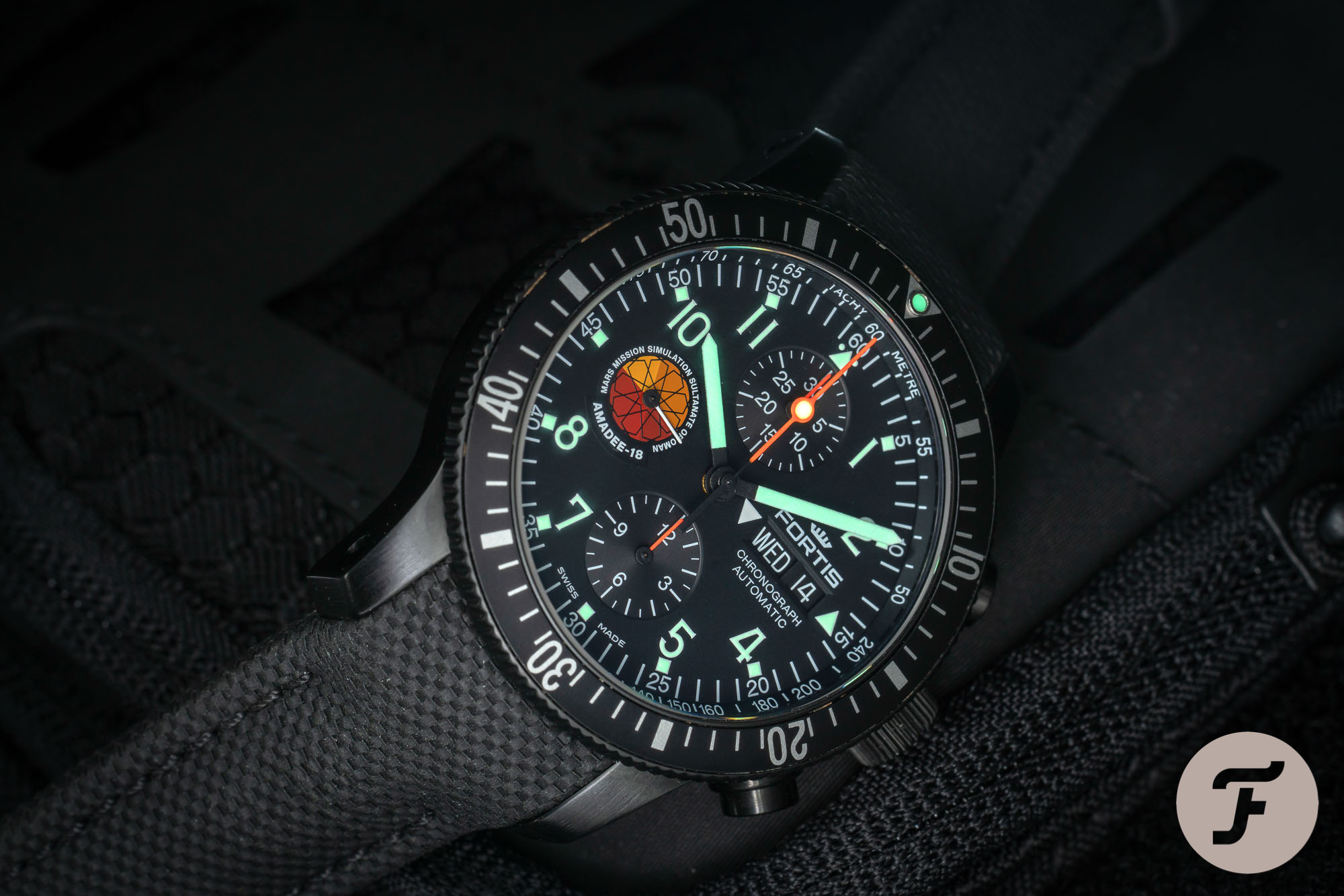 Although you can say the grain-finished dial is quite cluttered, it is also very legible. During the day, but surely also in low-light conditions. We charged the dial a bit and took the picture above to demonstrate. The wealth of numbers on the dial can come across as confusing, but each has its own track and scale. There’s the tachymeter scale in the outer ring, the minute track in the center, and the hours on the inner scale. The circular finish of the sunken subdials at 12 and 6 o’clock give a little bit of contrast.

The two triangles outside the day and date aperture show which way to turn the crown in order to advance them. Pretty neat. Besides the funky colors on the dial, this is a tool watch and it doesn’t hide it. Around the dial (and crystal), there’s the uni-directional 60-minute diving scale. It can also be used to time other things, of course. The triangle on top is lumed as well. 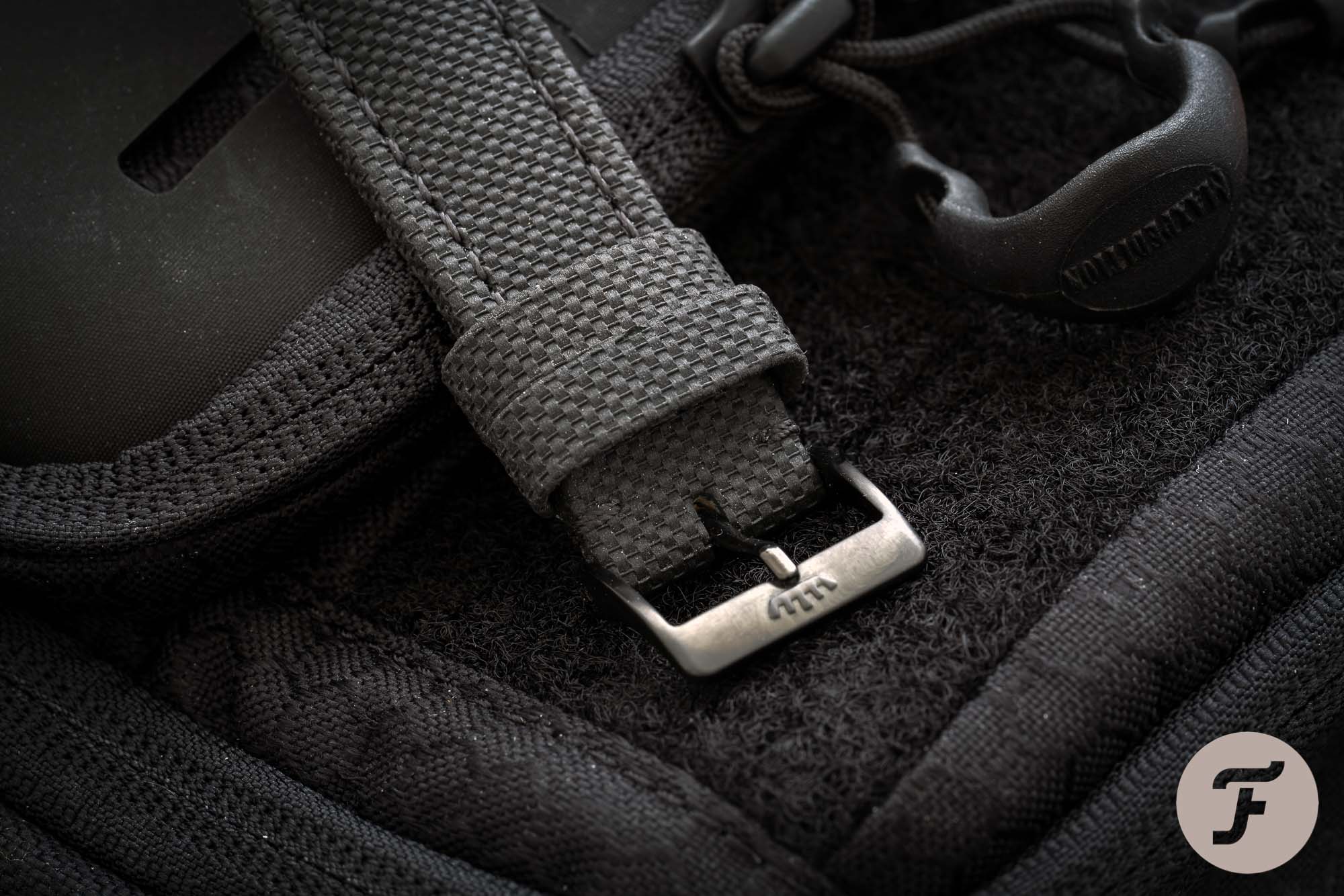 The Fortis Official Cosmonauts Amadee-18 comes on this black cordura strap. It is a bit stiffer than leather, but over time it will get more supple. It looks great with the black PVD case of the Amadee-18 chronograph. The pin buckle has an embossed Fortis logo and is made of black PVD steel. The strap connects perfectly to the case and leaves no gap or play. 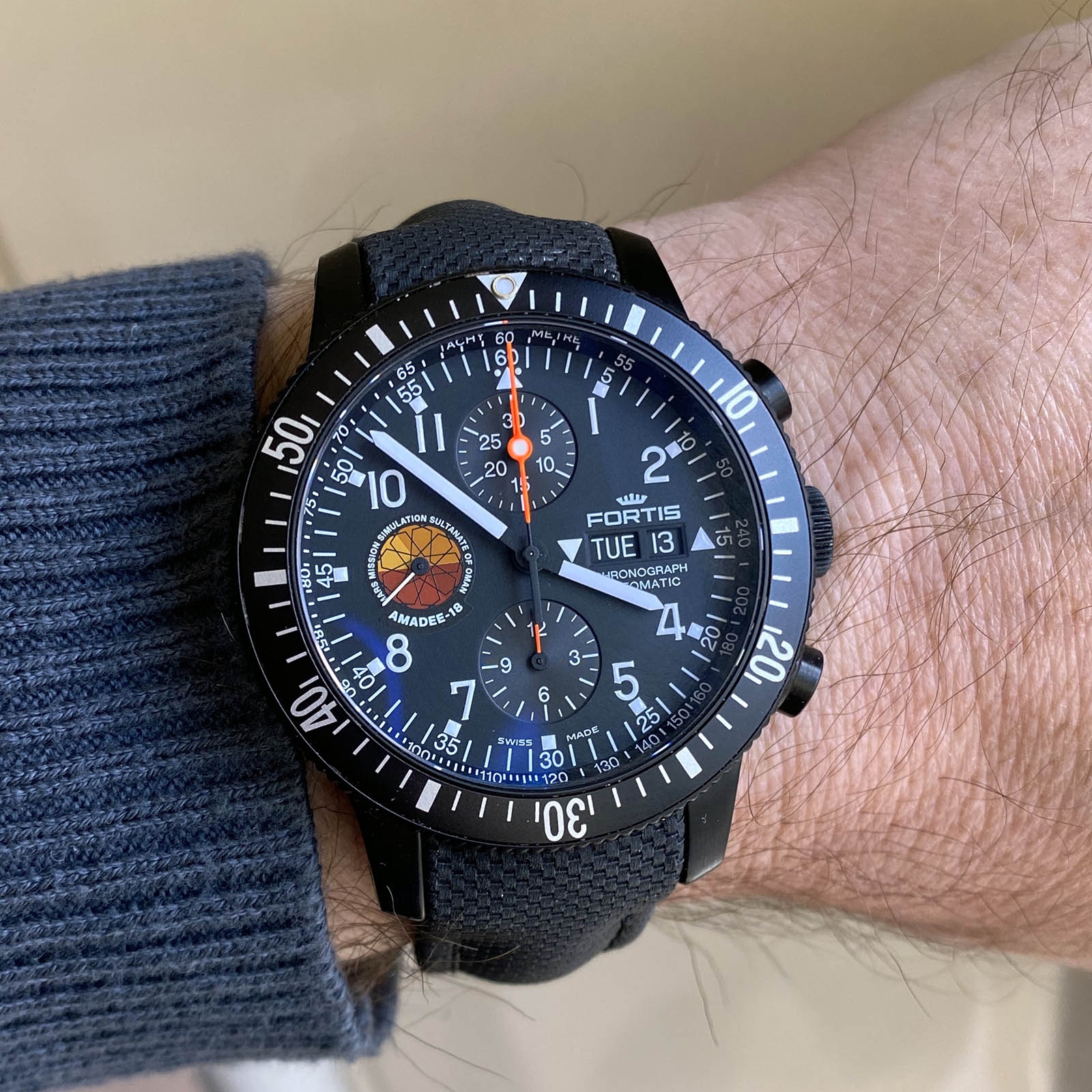 Aside from some small strange things, like the winding direction of the movement that seems to be stated incorrectly on the website, or the awkward reference number on the case back, it is a pretty cool watch. It has been on my wrist for a few days now, and I must say that the size of this Fortis Official Cosmonauts Amadee-18 is indeed just a number. It wears comfortably and it just looks awesome. After reading Rob’s interview with the sympathetic Fortis CEO Jupp Philipp (click here), I became even more enthusiastic. For me, it is important that a brand is sympathetic and fueled with passion instead of Excel sheets (although in the end, everyone needs to pay for their groceries, rent, etc.). 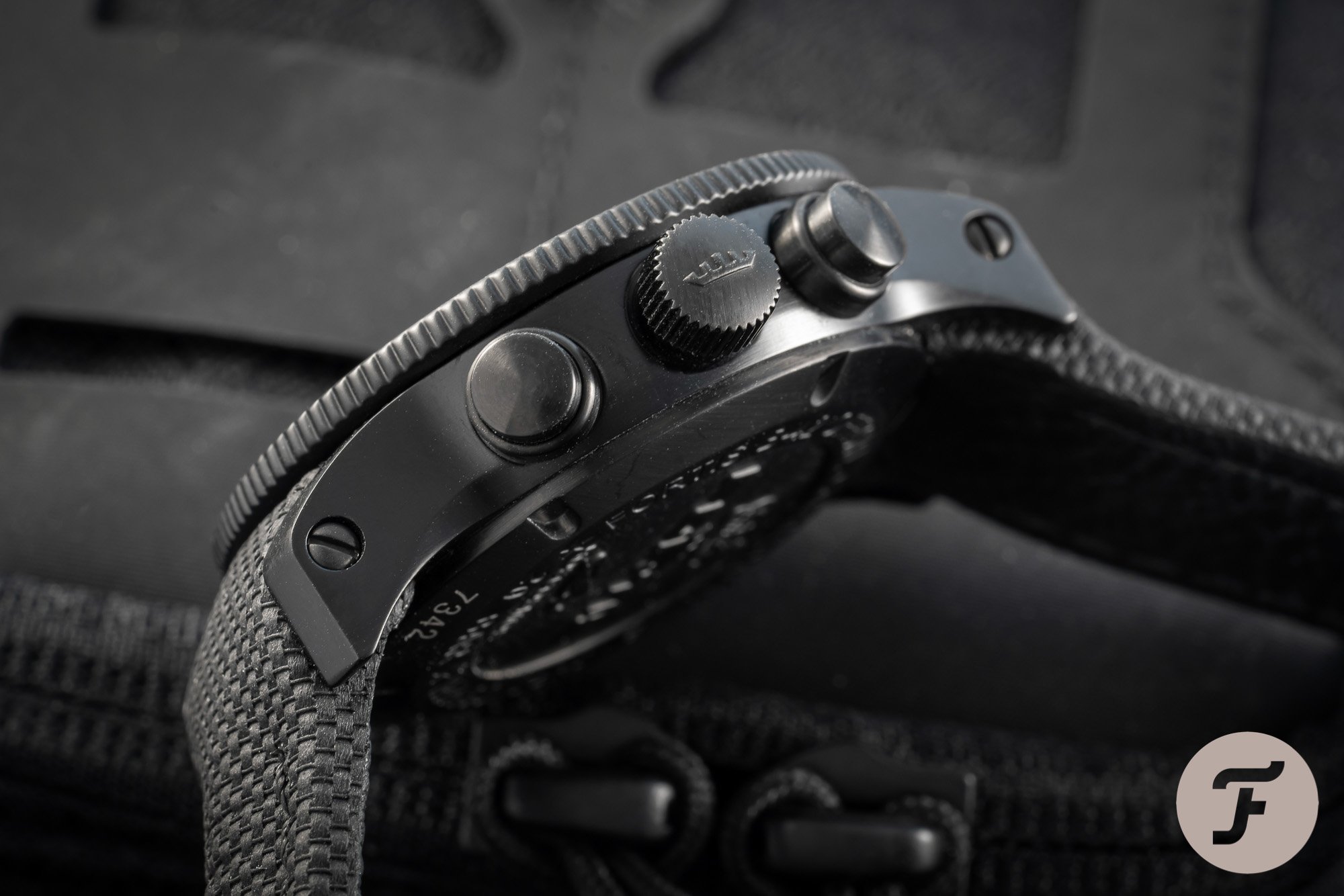 I like this watch. Period. And the Fratello team members that were in the office last week (Bert, Gerard, and Jorg) also gave it a try and gave positive feedback. It doesn’t happen to me very often that I want to keep a watch after review. But I am impressed. I wouldn’t mind adding either this model or one of the Official Cosmonauts chronographs in steel to my collection. Perhaps I just shouldn’t give it back (but yeah, I will).

The price of this Fortis Official Cosmonaut Amadee-18  is just a little bit higher than the regular Roscosmos embossed version in steel. It has a retail price of €3,300 (including VAT). More information on the official Fortis website.