Fortis On The Edge Of Space — Testing Watches In Extreme Conditions

Part two: to launch or not to launch
Rob Nudds
comments 5
Share

A journey north with Fortis Watches…

We’re out of bed early and meet one another in the canteen. Today is the projected launch day. The excitement is palpable. The weather looks stunning and the windsock is barely moving. We are confident. Our meeting up at The Dome is scheduled for 8:15 am and we troop up there en masse, eager to hear the results of the high-altitude weather test. 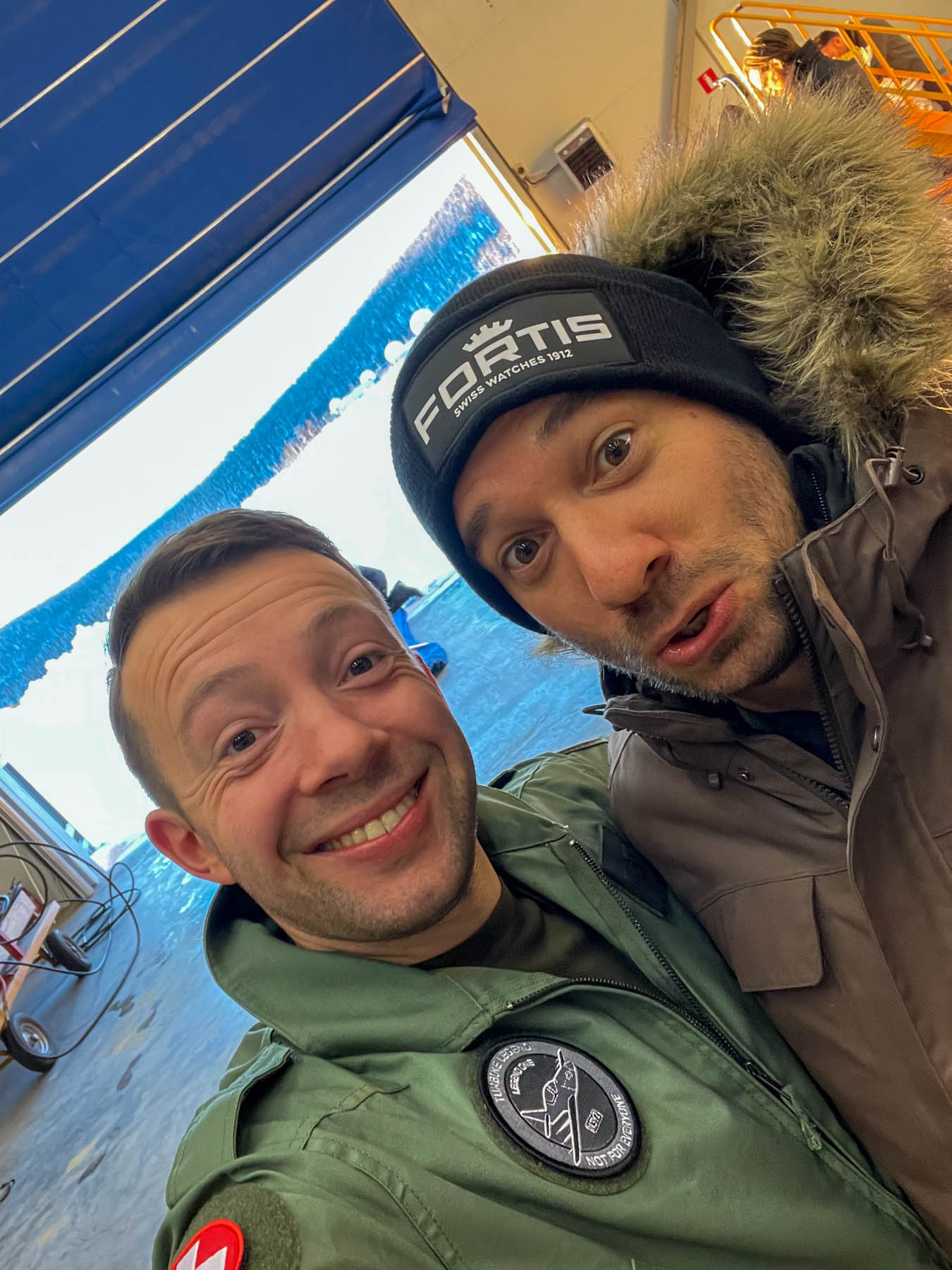 The disappointment takes a while to bed in. At first, none of us believes it. The environment seems to be on our side. The weather is serene, blissful, even. The news that the wind speeds just above our head are too high deflates us all (no pun intended). The maximum windspeed we can handle for a safe launch is 5–6kph. Apparently, winds are gusting up to 12kph just above the launch pad. Launch in these conditions and we risk the balloon blowing back towards base, crashing into the dome, and destroying both its precious cargo and our hopes of a successful mission. Reluctantly we accept the advice of the experts and slink off to the hotel or different corners of The Dome to make use of our suddenly “free” time as best as possible. 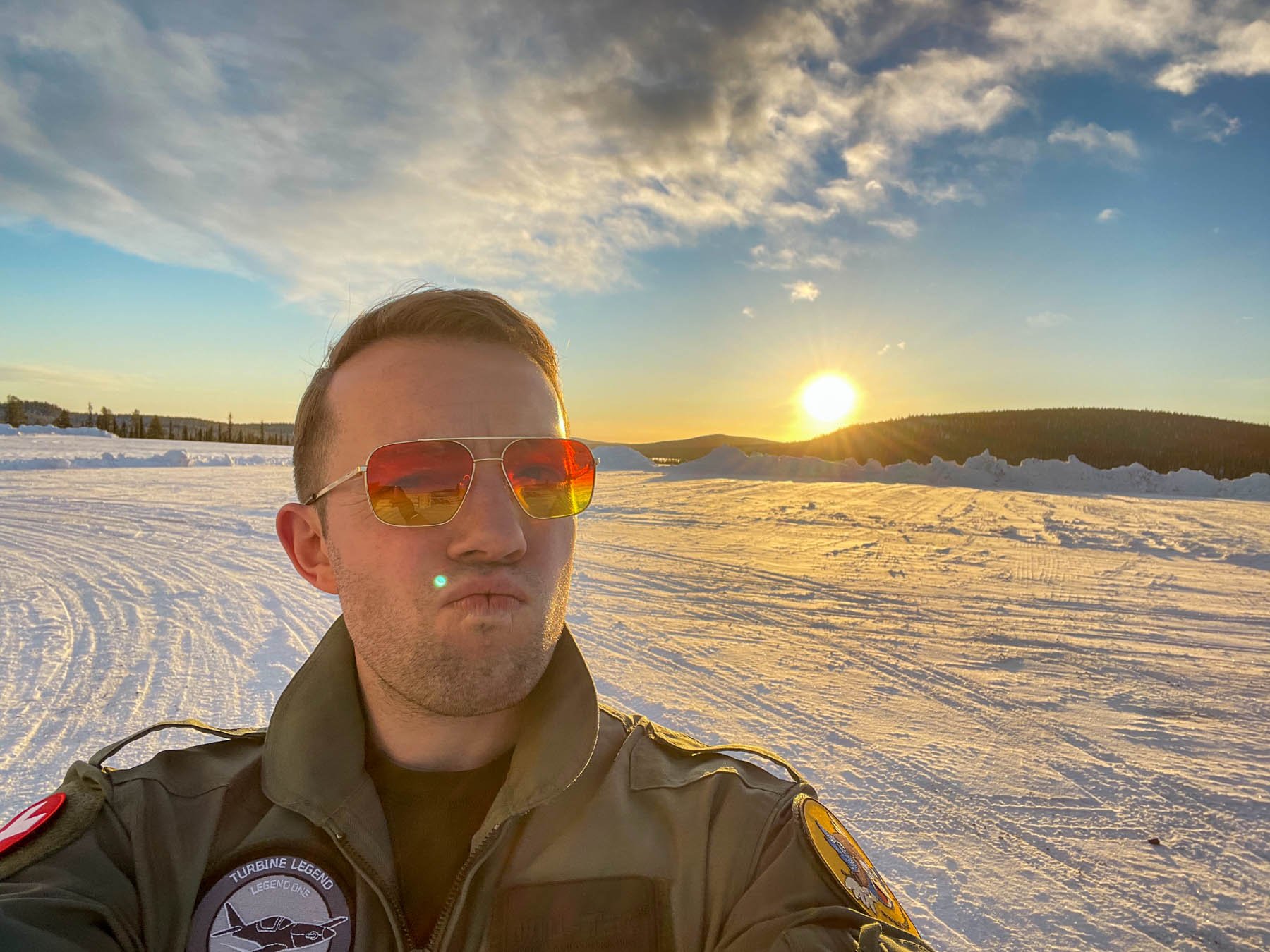 The sense of foreboding is exacerbated by the preliminary readings of yesterday’s weather forecast. Wednesday was seen as the best day — by quite some way — for a smooth launch. Thursday was clearly predicted to be windier and cloudier, two things we’re keen to avoid given that our recovery mission should, ideally, take place on the same day as the launch and while the helicopters can handle the stronger winds, the reduced visibility would become a serious issue. Friday morning was predicted to be completely unworkable. Heavy and low fog was forecast to arrive on the back of blistering gusts and viciously low temperature. 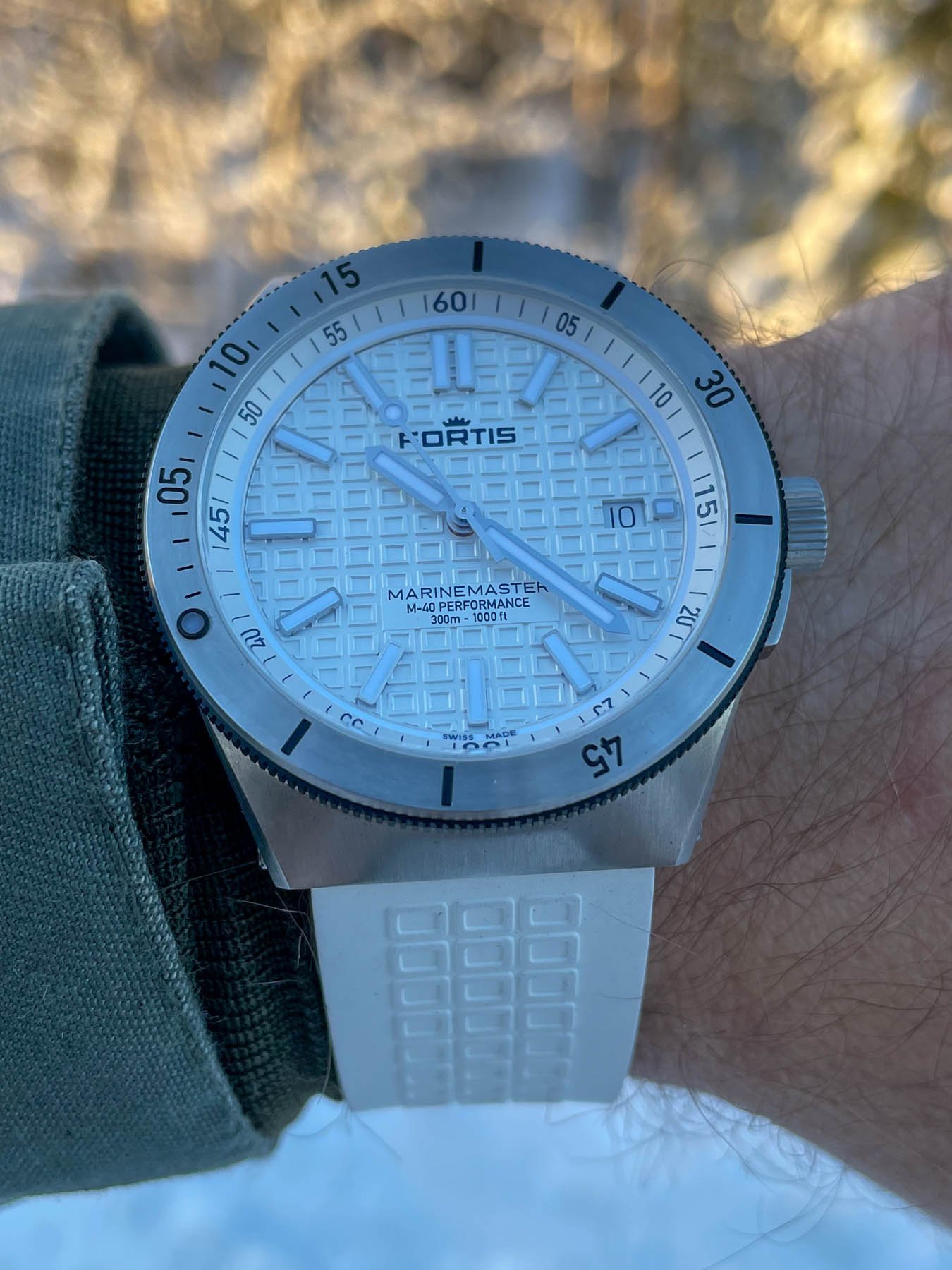 Andreas, Stefan, and I take our seats in the center of The Dome as we prepare to shoot a relaxed and convivial conversation detailing the reasons behind our presence at Esrange. We had originally scheduled this shoot for Thursday, hoping, of course, to be reflecting on a job well done, but the shuffled schedule left us little choice but to film ahead of the launch.

We enjoy the chat but beneath every word is a palpable sense of uncertainty. Will the mission go ahead as planned? Will we be able to launch thirteen chronograph movements into the stratosphere? Could it be that we might possibly leave Sweden disappointed and with our eyes fixed over our shoulders, still upon the stars? [You could see everyone behind the scenes doing their best to remain calm and positive, but there was a definite sense of foreboding among the team! — Dave] 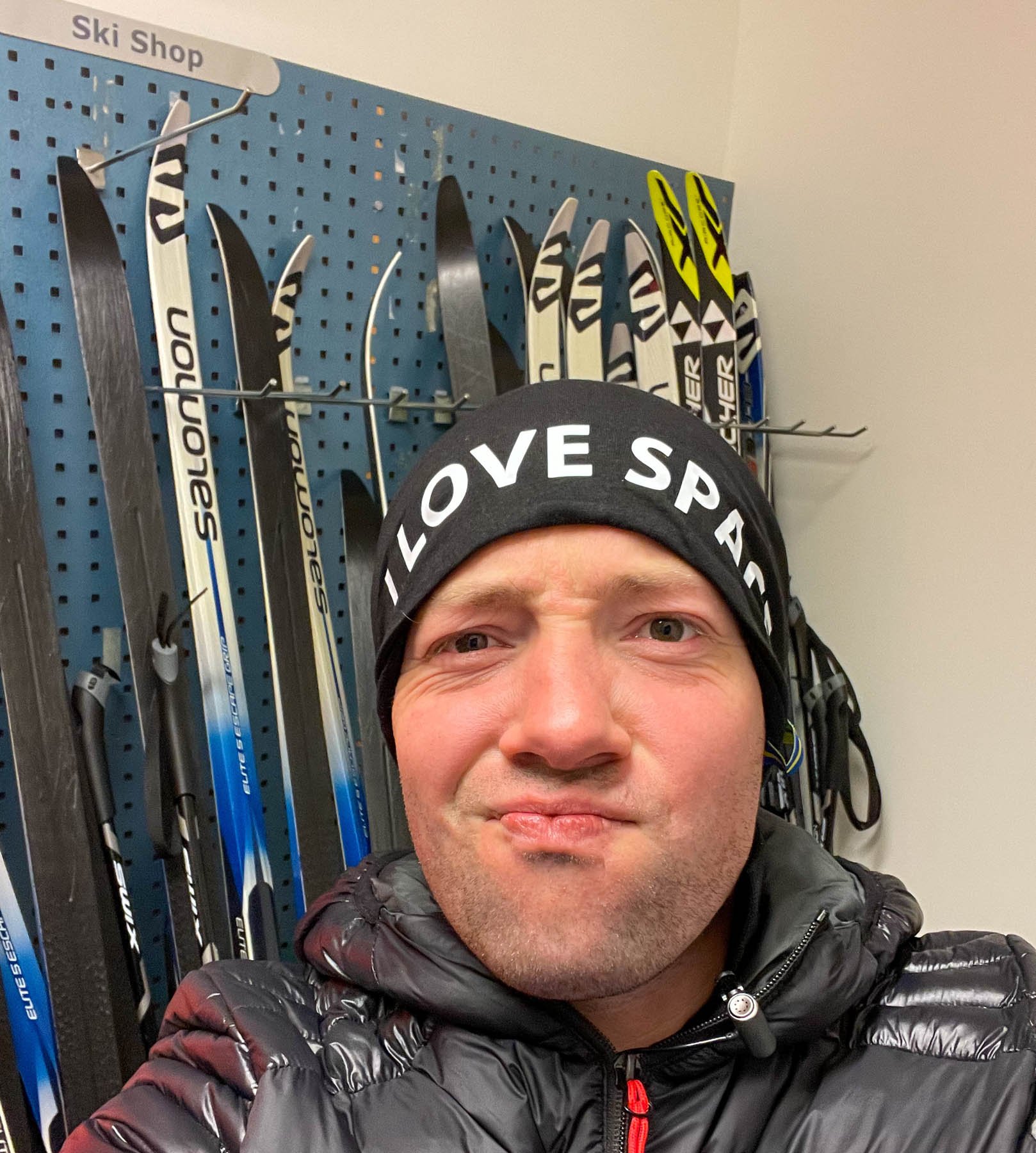 The video shoot wraps and we dissipate into separate areas of The Dome like hot mercury dropped on a cold surface. I am mooching around in the kitchen upstairs [What better way to drown our sorrows than with a cup of terrible machine coffee?! — Dave], looking out on the silent scene, staring intently at a rock that keeps managing to convince me it is a prone deer every time I look out of that same window when Dave approaches me from behind.

“What do you think our chances are?”

I’m an optimist. Sometimes I am a bloody-minded optimist of the most thoroughly obstinate optimism. Generally speaking, I refuse to buckle in the face of bad news, but before an optimist, I am a realist and everything we’ve been told about the weather and its projected development doesn’t fill me with confidence. 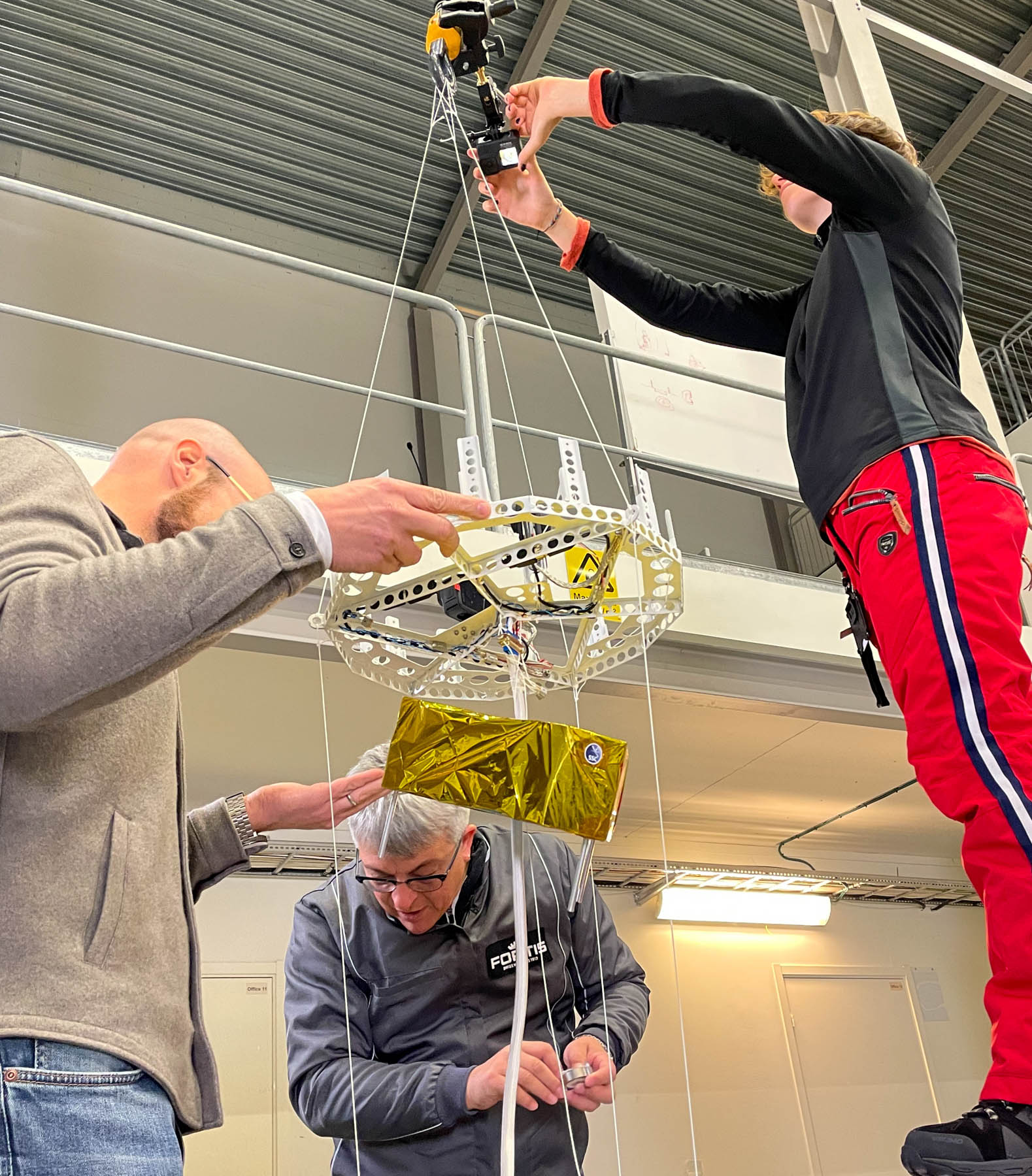 Dave nods stoically. He’s keeping a typically stiff upper lip but I can see the flicker of disappointment race across his corneas in the fluorescent light of the kitchen. 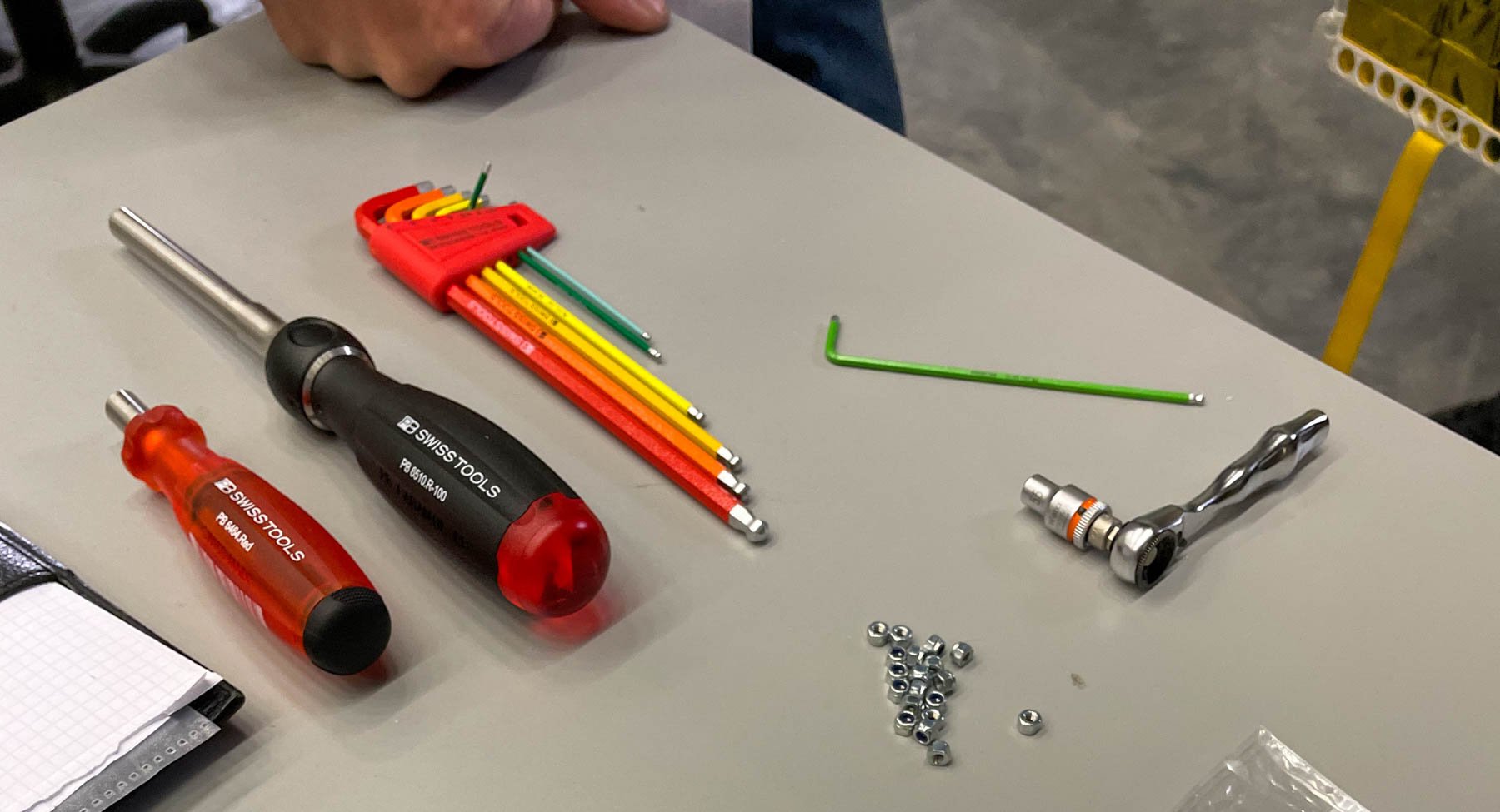 We write for a short while before deciding to use the afternoon to record a few more video shorts for Instagram. We’re outside in the cold shooting what sounds like an infomercial for commercial travel when Stefan rocks up next to us.

“So…” he starts slowly. “We’ve got the special dinner tonight.”

“To celebrate the launch.”

“The launch that hasn’t happened yet?”

“Yes, that one. Definitely that one.” 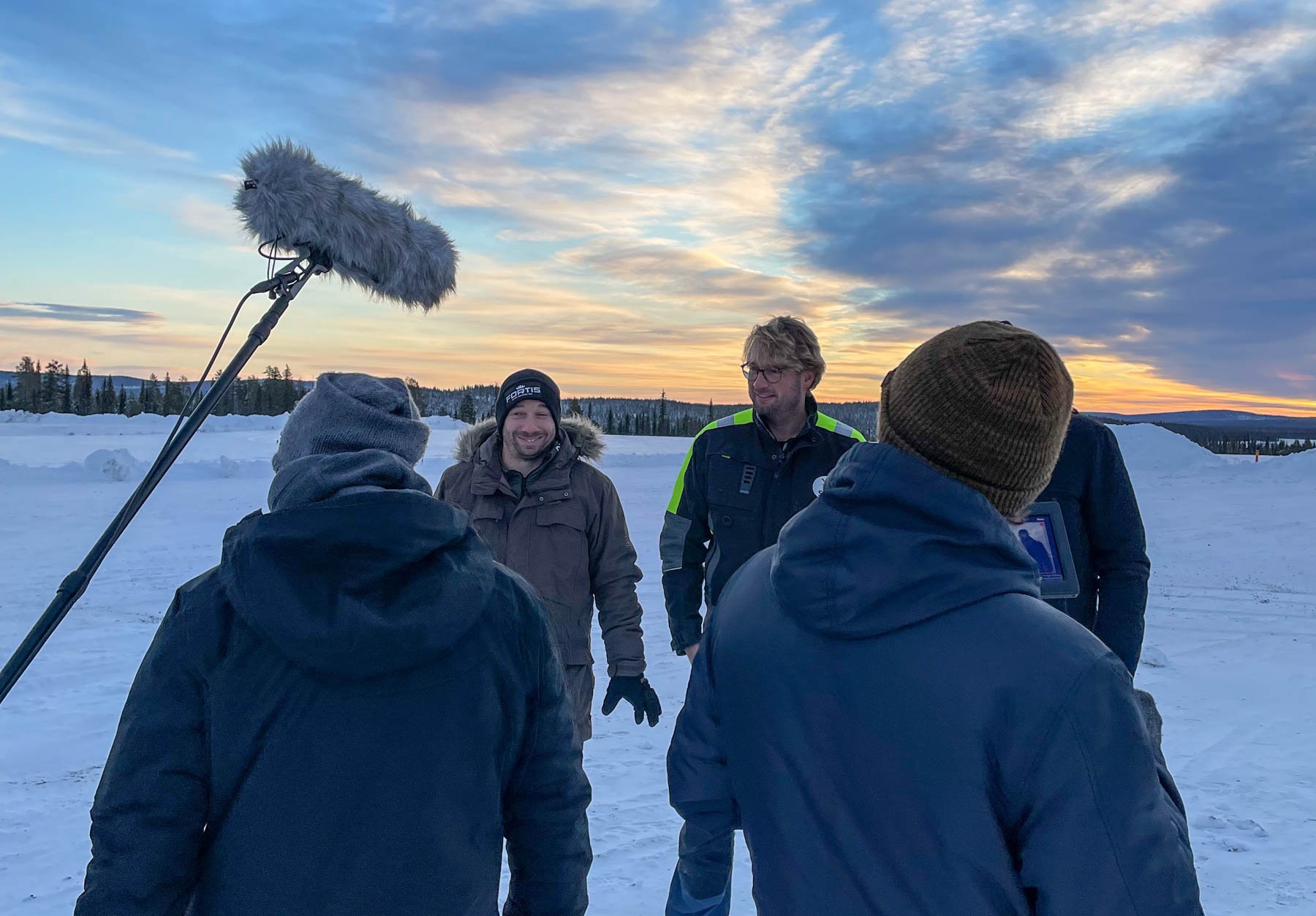 “Well,” he draws a circle in the snow with his toe and glances skyward, “we don’t really have a choice. We had to drag in the caterers from the city, so tonight’s the night.” 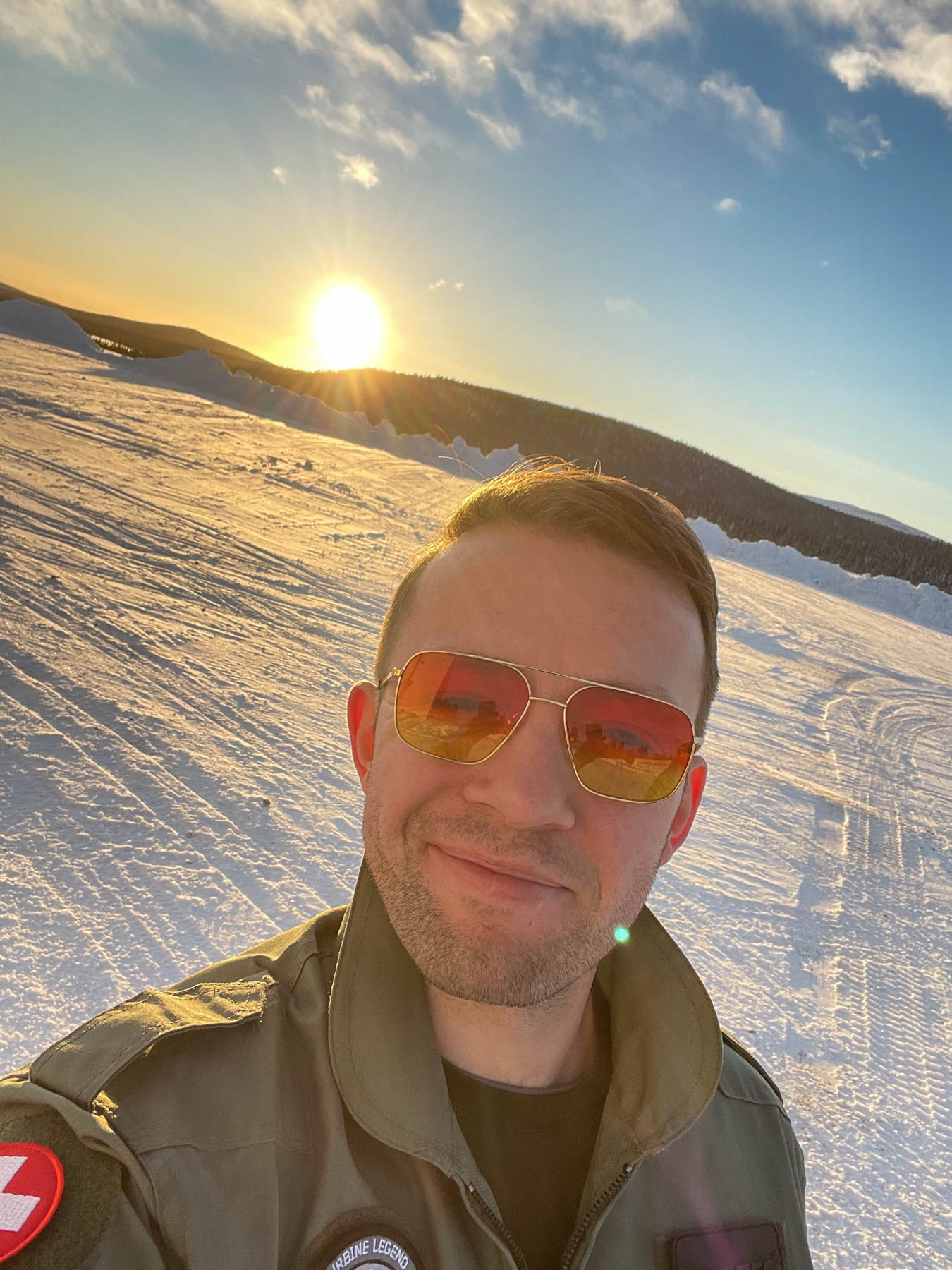 We shrug and admit we’re hardly going to turn our noses up at a three-course meal with wine. As such, we get there early. The room is lit with candles and the tables have all been pushed together giving the impression of an old-school banqueting hall. Everyone files in and takes a seat. The food is before us immediately. 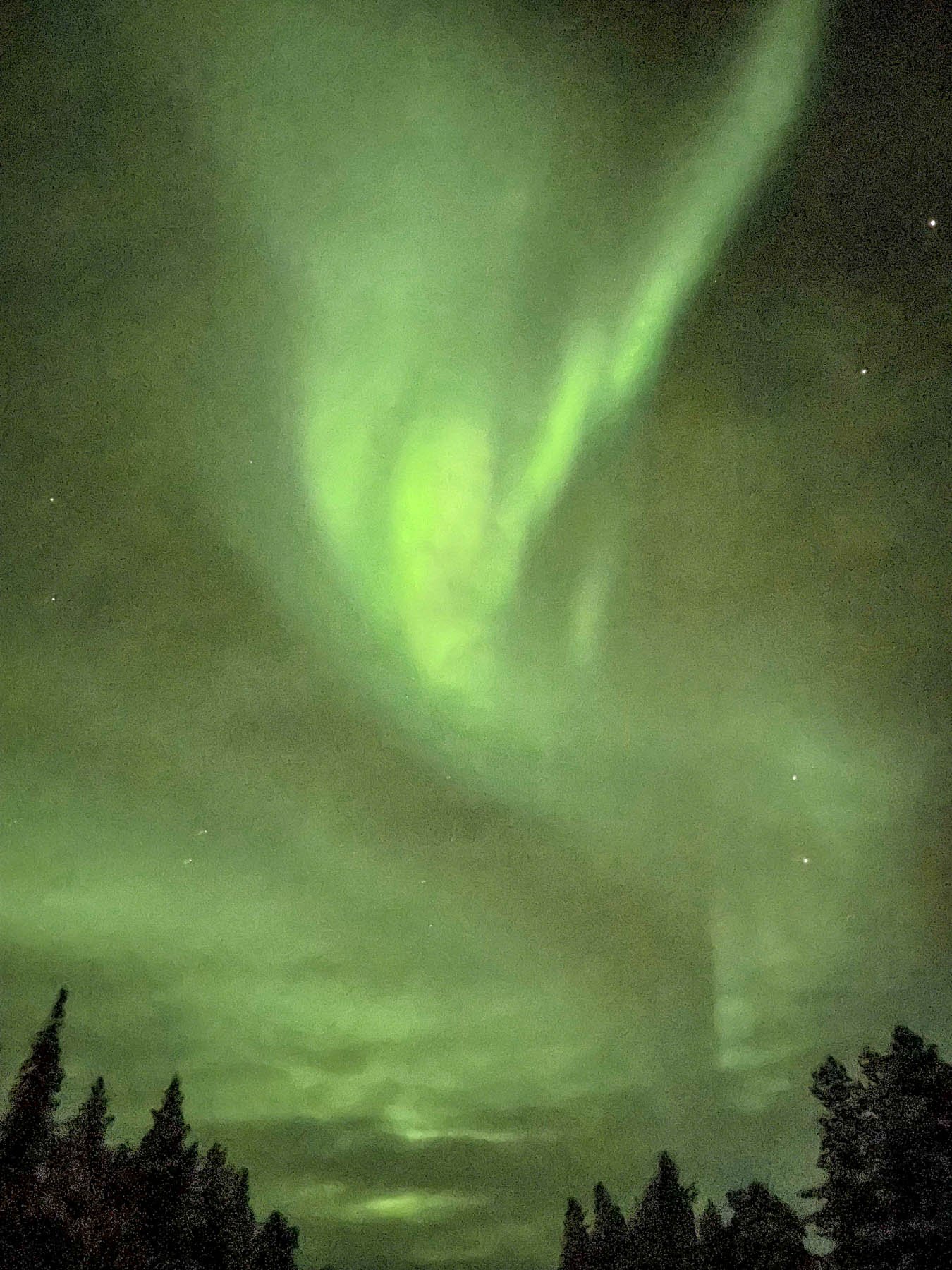 Here we are, 145km north of the Arctic Circle, eating some of the finest food to ever grace my lips. Maybe it tastes even better because we’d been eating pretty much the same thing daily but whatever it is I can’t believe my taste buds when I dig into the main course of tender moose and some kind of spicy root vegetable pastry sent from heaven by a vengeful God himself to ruin the rest of my mealtimes for that one time I cussed him out in the playground. It was totally worth it. 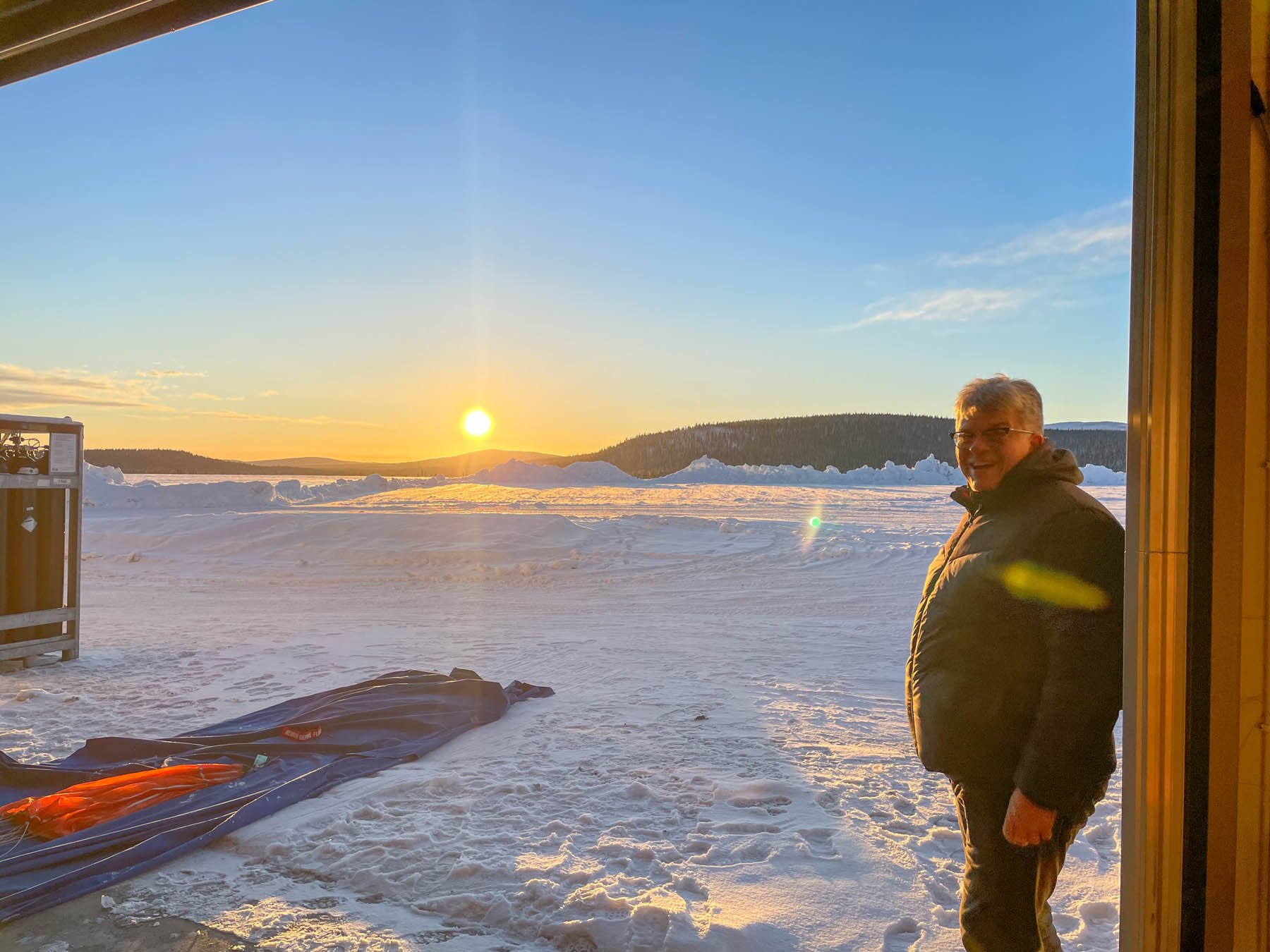 I am hunched over my bowl of scrambled eggs. I don’t know how many eggs gave their lives for my breakfast, but it was a lot [You sure ate a LOT of eggs this week. Please try to cut back next time! — Dave]. The sausages look minuscule in comparison to the mountain of eggs they are flanking, but they don’t seem to mind. Together, my breakfast items are doing their best to prepare me for a big day. The wind is low. The fog is absent. All around a sense of calm pervades. It wasn’t supposed to be like this. It wasn’t supposed to be clear. Could we be about to get lucky? 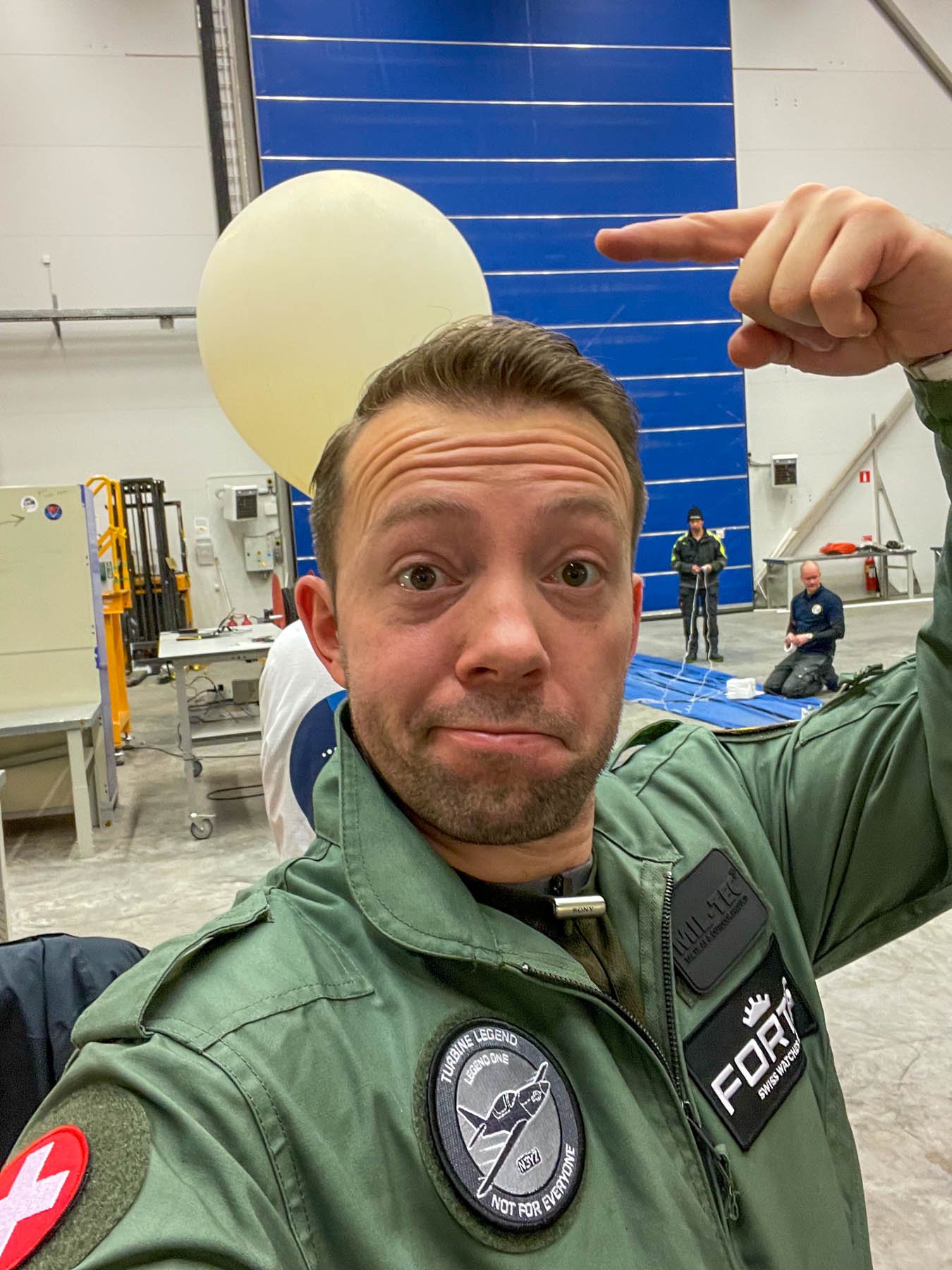 “The Dome at 7:30,” says Andreas, appearing in a blur of excitement. The deflation of yesterday is gone.

“It’s happening?” I say through about two and a half eggs worth of scramble. 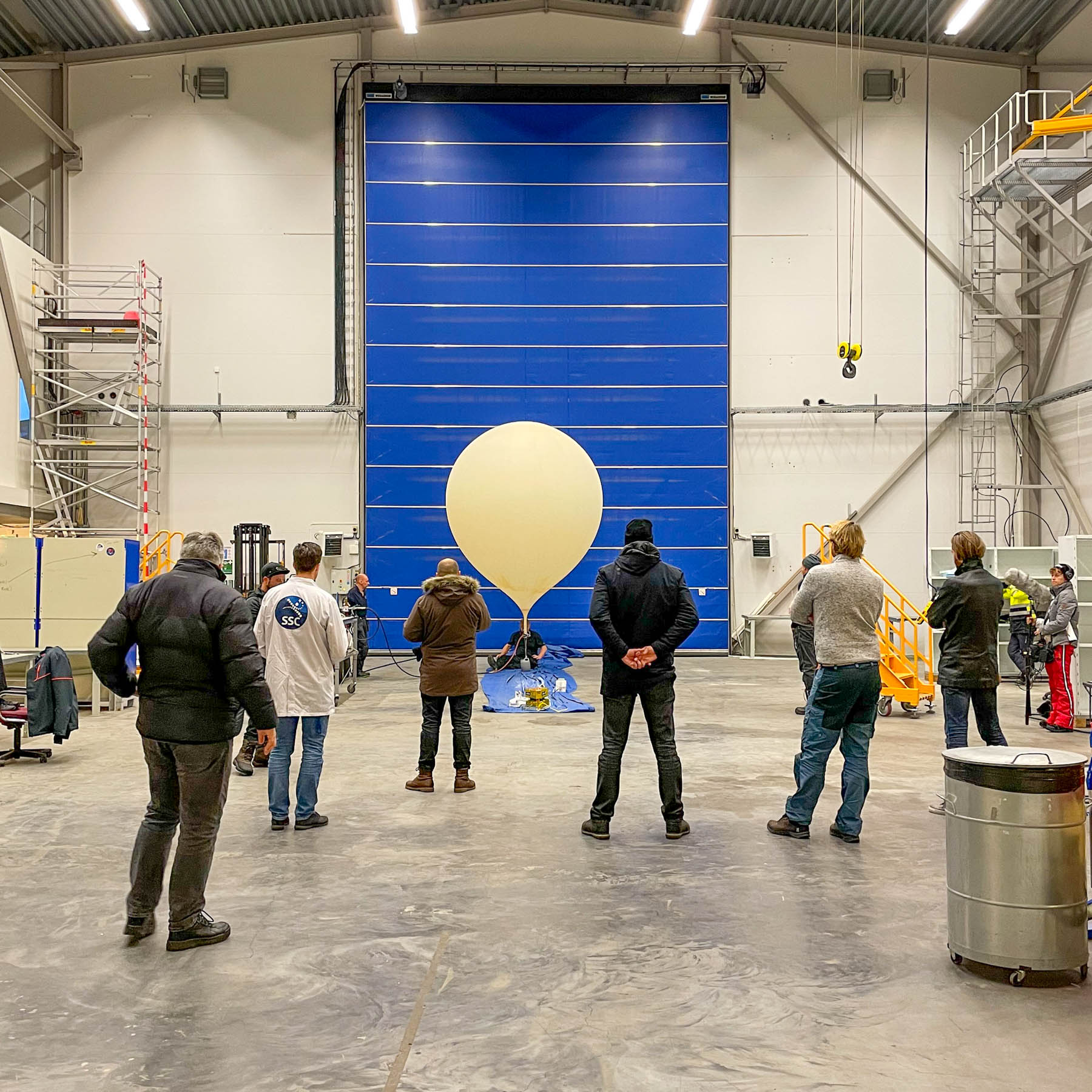 I inhale the rest of my breakfast and dash back to the hotel in search of Dave. I can’t locate him so I hotfoot it up to The Dome alone where the engineers and launch professionals are hard at work readying the balloon [I was having breakfast with other Stefan, whom we all called “The Master of Rockets”. He said “without me, this balloon isn’t going anywhere, so I shall enjoy my breakfast — you should too.” — Dave]. I step inside just in time for the briefing. It’s actually happening. I can’t believe it. The rolling door of The Dome is half open and the Arctic sun is blazing through. It is beyond beautiful. The tranquility. The crispness of everything. It was like being on another planet. 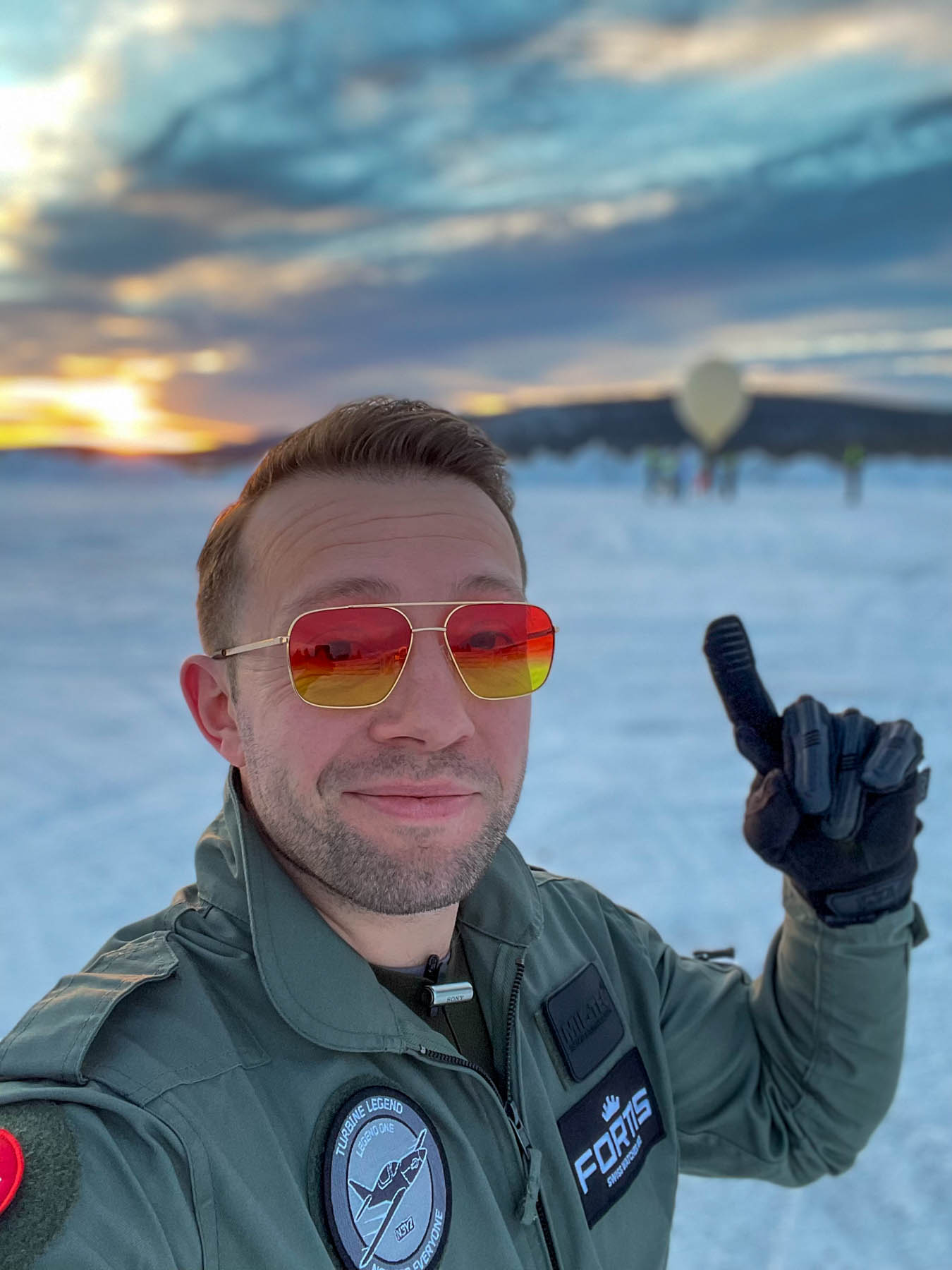 The briefing rounds out in good time but I’m not sure anyone can remember a word of it. The excitement is tearing through the hanger like a tornado and not even the deafening sound of the balloon being inflated at such a pace can flatten the mood. The film crew is buzzing around the balloon like well-drilled bees. I’m doing my best to get some amusing shots of it and me in my flight suit (because I’m a pilot, don’t you know?) while they ready it for take-off. 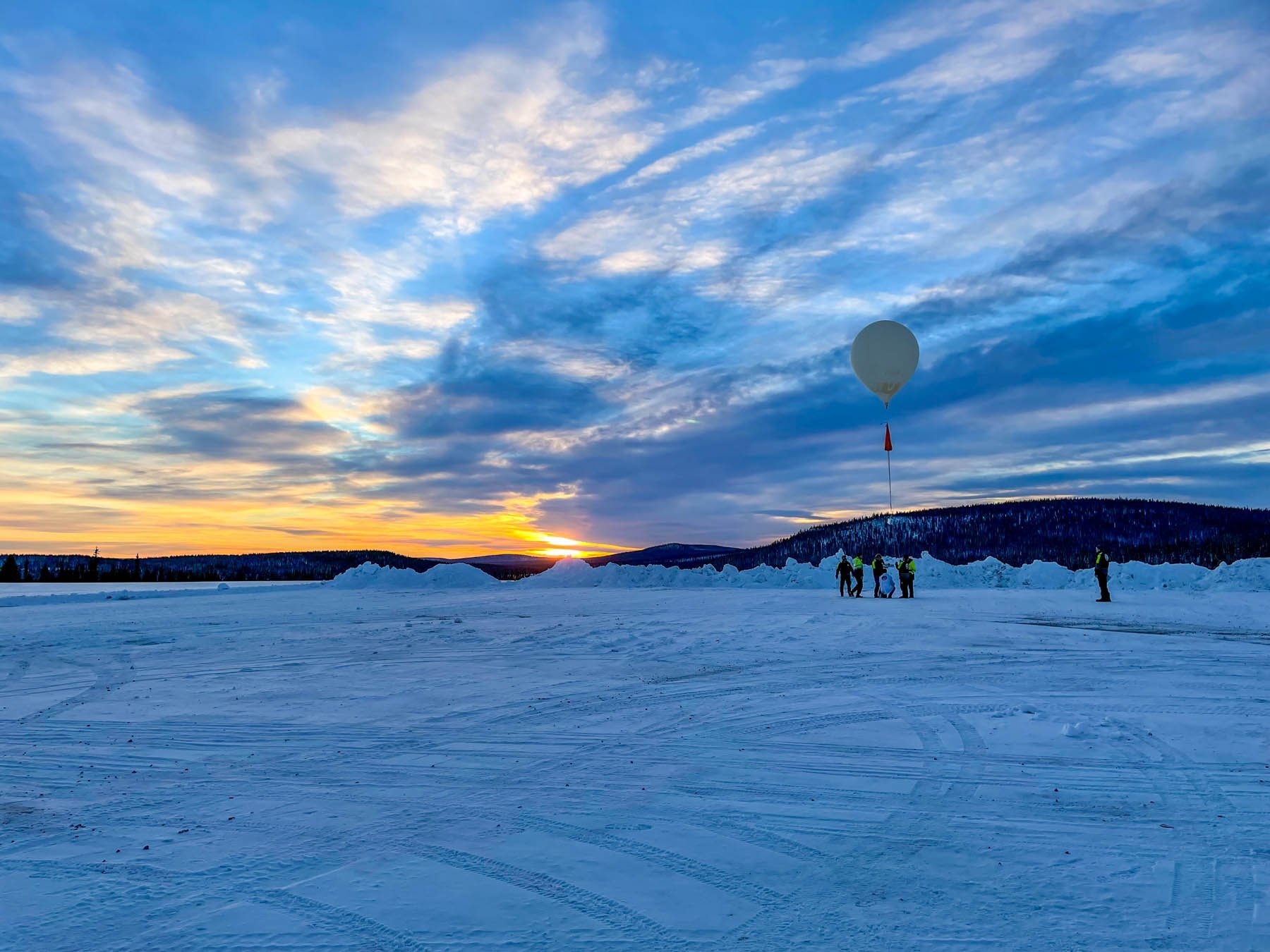 We are told that take-off won’t be a particularly grandiose affair. Basically, the balloon, once full, will be carried out of the hanger, with its precious payload supported beneath it and as soon as it is outside and the wind turns to our favor it will be released. This isn’t a rocket launch. There is no countdown. There is no ignition. This is just good, old-fashioned, high-altitude ballooning. If there ever was such a thing…

Before we know it it’s happening. The balloon is escorted out to the launchpad, wished luck by all asunder, and cast into the willing sky. And up she goes! Higher and higher, into the blue. There isn’t a single moment in which we worry that the balloon might blow back towards us or The Dome. She’s free within seconds and, climbing at a rate of four meters per second, she’s clear of all danger in around ten.

“No time to celebrate,” grins Andreas as he walks toward me having finished a short interview with the crew. “We’ve got a helicopter to catch…”