Fortis Adds The Blue Japan Edition To The Stratoliner Collection

Designed for the Japanese market, available to all!
Dave Sergeant
comments 10
Share

If you’re a regular reader here on the pages of Fratello, you’re likely well aware of the Fortis Stratoliner. The new Stratoliner is a complete redesign and revamp of the old Stratoliner collection with the modern-day space traveler in mind. Not only that, but Fortis also sent the watch up to the stratosphere on a balloon last November to conduct real-time environmental testing on its new WERK-17 caliber (made by La Joux-Perret). No, the stratosphere is not actual space, but the next stage of the testing program will see Stratoliner watches launched into outer space on a sounding rocket.

That’s all pretty cool, right?! I was present at the Swedish Space Center along with Rob last year, and you can read some of our coverage here and here. It was a fascinating trip and one that shows Fortis is pushing itself to be the best it can be. Conducting real-environment testing is far more expensive than simulated-environment testing, but the results are more accurate. Authenticity is vitally important to Fortis, and that dedication is something I appreciate. 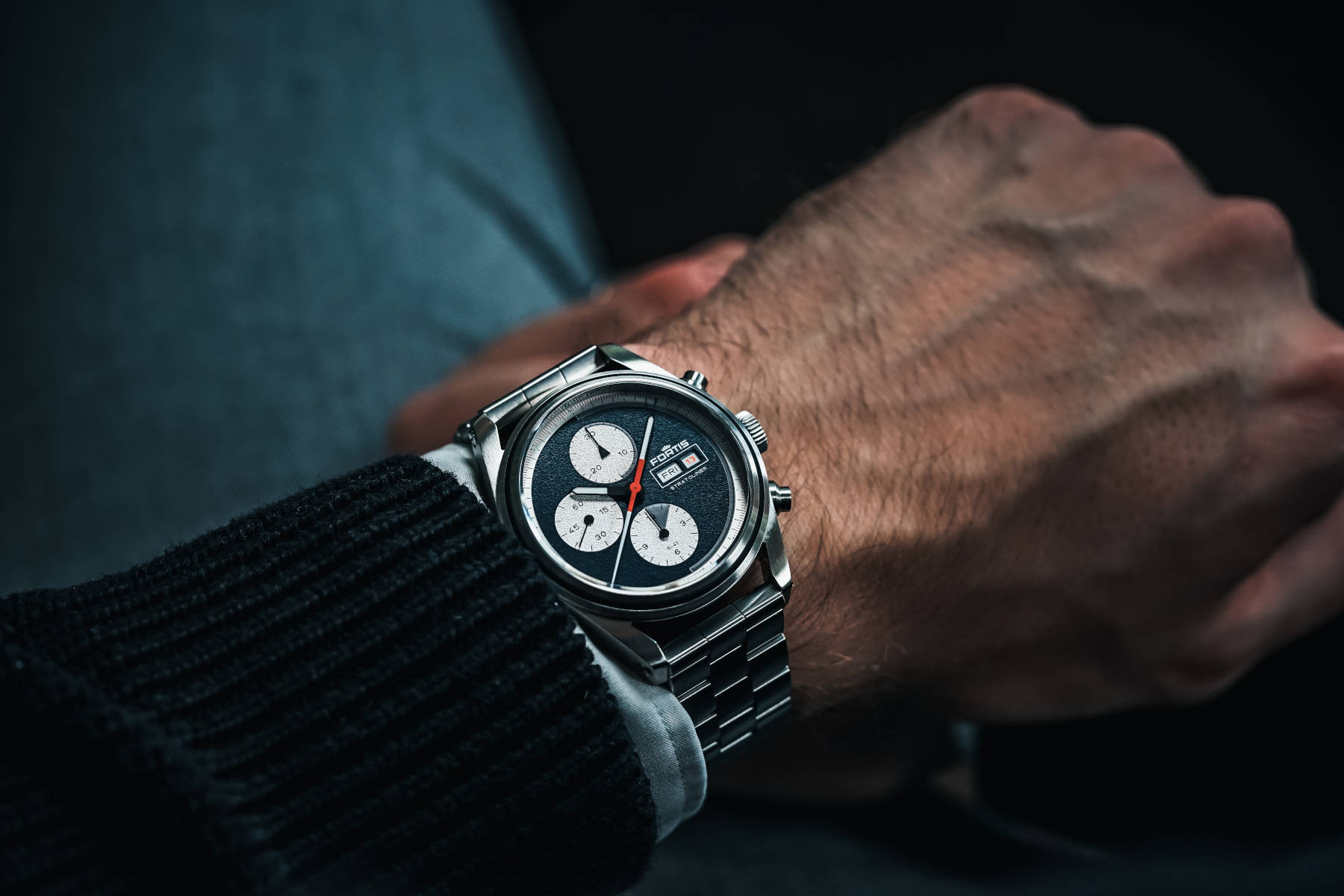 When Fortis officially released the Stratoliner in May this year, the collection comprised three colorways — White Dust, Cool Gray, and Cosmic Gray. However, the Fortis website also indicated that a fourth colorway would be coming to the collection soon. That model was the Stratoliner Blue Japan, and now it is here!

This is not the first time that Fortis has released a Blue Japan-dialed model. In late 2020, the brand from Grenchen launched its Flieger collection in both 41mm and 39mm cases. Alongside the regular collection, Fortis released the F-39-J, a limited edition of 50 pieces sold only in Japan. That was almost a trial run for how the brand would approach future Janapese editions. After it proved popular, Fortis decided not to limit the Stratoliner Blue Japan in quantity or by location. 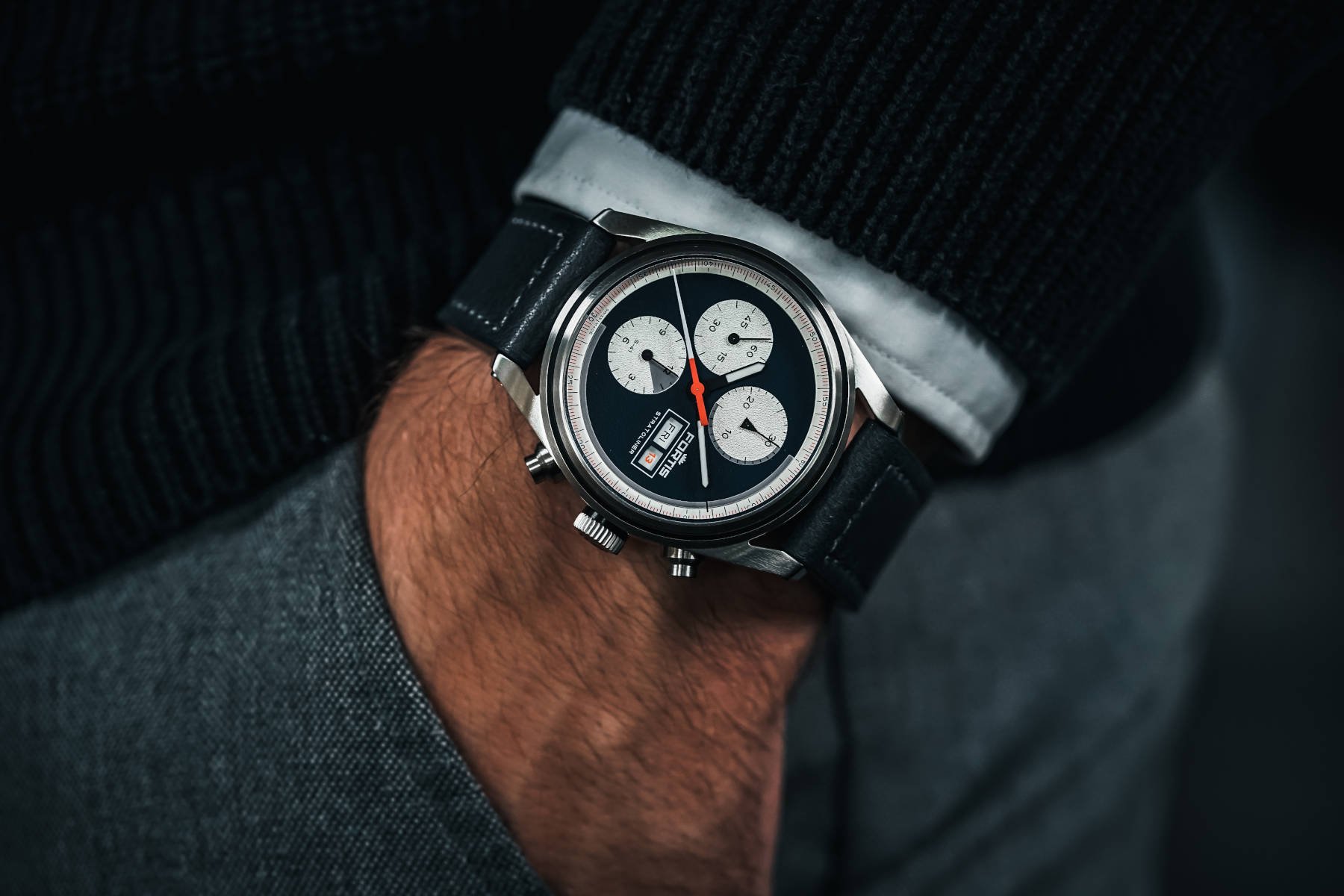 The Japanese flag is white and red, so why does Fortis use blue for its Japan edition? Blue is one of the Japanese primary colors, alongside white, red, and black. Most Japanese traditions, clothing, architecture, and events are represented through these primary colors.

Blue and indigo (the popular shade of blue made from the leaves of the indigo plant) are used extensively in clothing and textiles, casual wear, and formal attire. Many students wear blue uniforms as per school rules, and businesspeople traditionally wear blue clothing to show their serious intentions in the workplace. Furthermore, the Japanese national football team plays in blue. You only have to think of the Japanese denim industry (one of the finest and most respected producers of high-quality denim worldwide) to see blue and indigo once again. 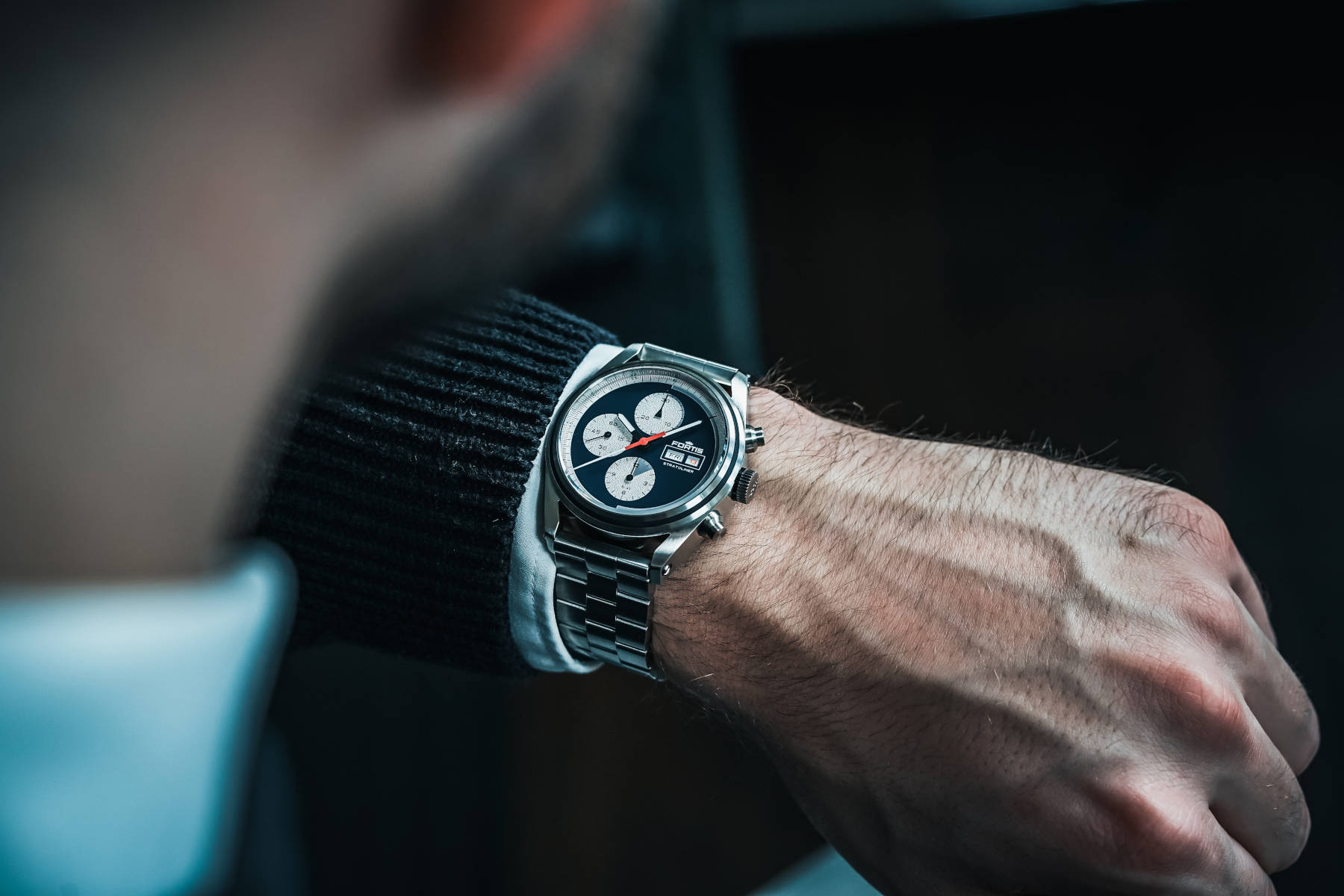 Aside from the dial color, the Stratoliner Blue Japan is identical to its three siblings in terms of specifications. The 41mm recycled-steel case houses the excellent WERK-17 movement, produced exclusively for Fortis by La Joux-Perret. Sixty hours of power reserve is a nice feature of the triple-register day-date caliber. The Blue Japan Stratoliner comes with an Aviator leather strap or Fortis’s Block Bracelet with its excellent quick-adjust clasp. You can take a look at my more in-depth hands-on review here. 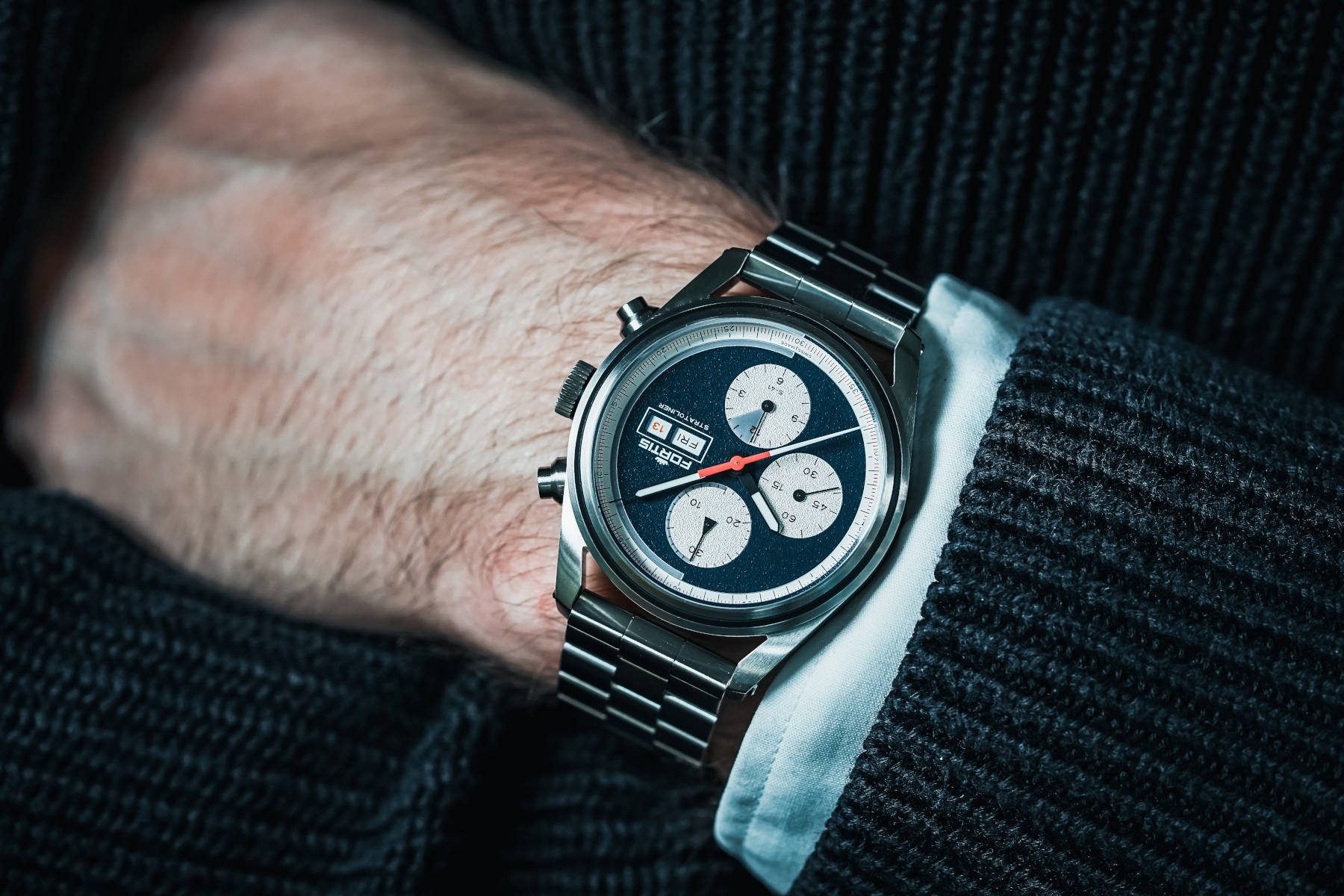 Aside from changing the dial color to this gorgeous blue shade, Fortis also included a little Easter egg hiding in plain sight. Indeed, I probably would not have spotted it had Fortis’s Andreas Bentele not pointed it out. Take a look at the central chronograph seconds hand. On the other three colorways, this hand is Galactic Blue in color, but the Blue Japan edition is red and white. That in itself is not particularly special, but as Andreas explained, “If you turned this hand very fast, you would have the flag of Japan!”

Love it or hate it, it’s kind of a gimmick, but to the right degree. It’s there if you know where to look. Of course, the chronograph seconds hand will never turn that fast (at least it shouldn’t!), so you will never actually see the Japanese flag. Still, it’s a thoughtful little touch from the Fortis design team. 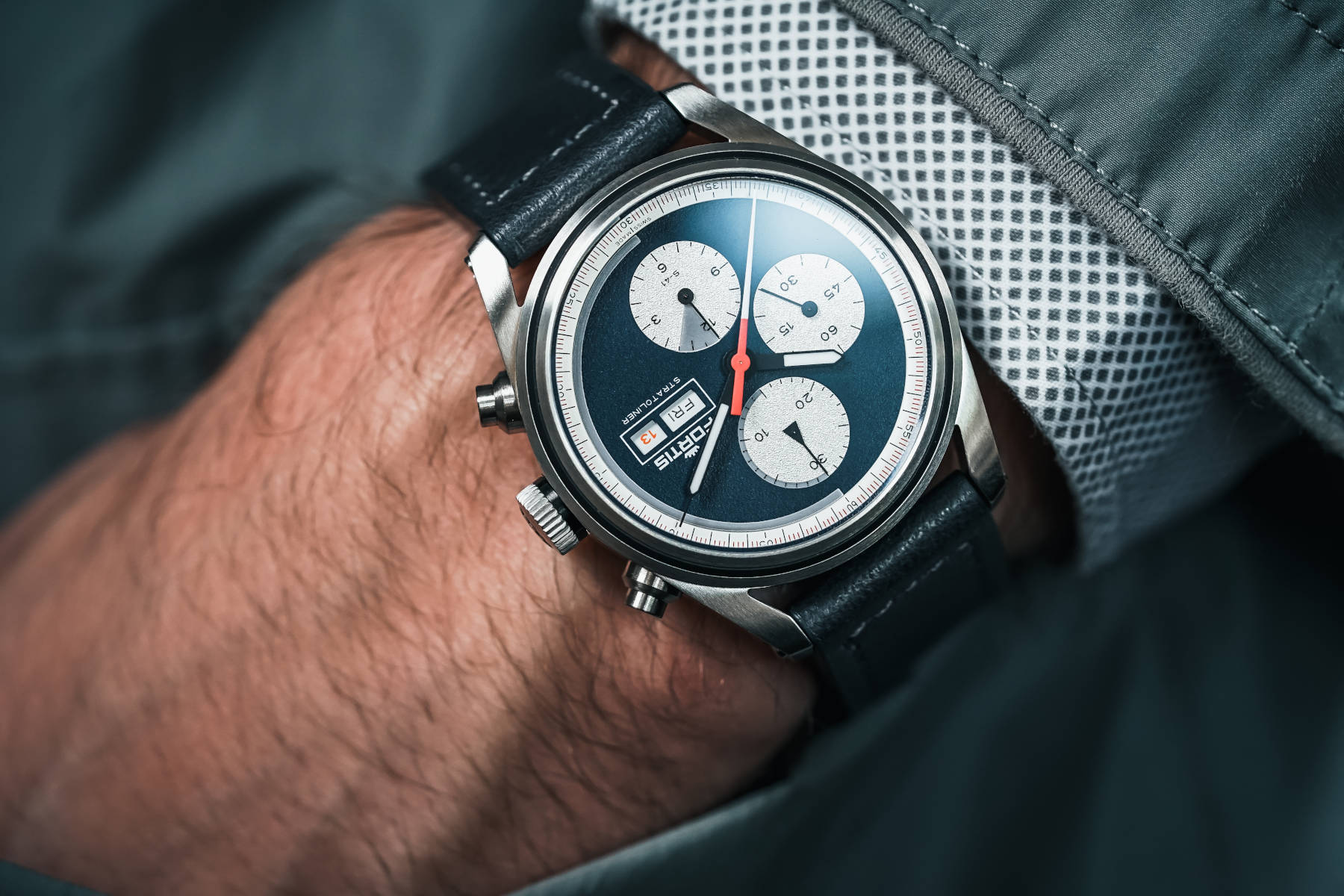 The Fortis Stratoliner Blue Japan is now available from the brand’s Japanese retailers. From August 13th, you’ll be able to order the watch directly from the Fortis online web store with worldwide delivery.