I’m sorry to disappoint, but today I won’t be talking about some Japan-based spinoff of a popular series of books turned movies. On the bright side, you won’t be subjected to sparkly pale men (other than in the wrist shots) and some of the most hilariously bad acting and special effects ever to hit the silver screen. Instead, what you will be subjected to will be the very special G-Shock GMW-B5000PB-6 Twilight Tokyo. This limited-run model was introduced at the start of October, and it caused quite a splash at the time of release. Its unique mix of color both on the dial and bracelet was quite unique and charming. But the question remains, does the watch hold up in person and on the wrist?

First of all, let me disclose that I am a big fan of square G-Shocks. In the digital watch space, I don’t think there’s anything out there that beats the classic square. I am the proud owner and abuser of a rather basic resin-cased model, the DW-5600E-1. This is the watch that comes with me when no other watch dares. Running, swimming, fishing, hiking, cycling… This thing does it all and shrugs off any bump or knock thrown its way like it was nothing. 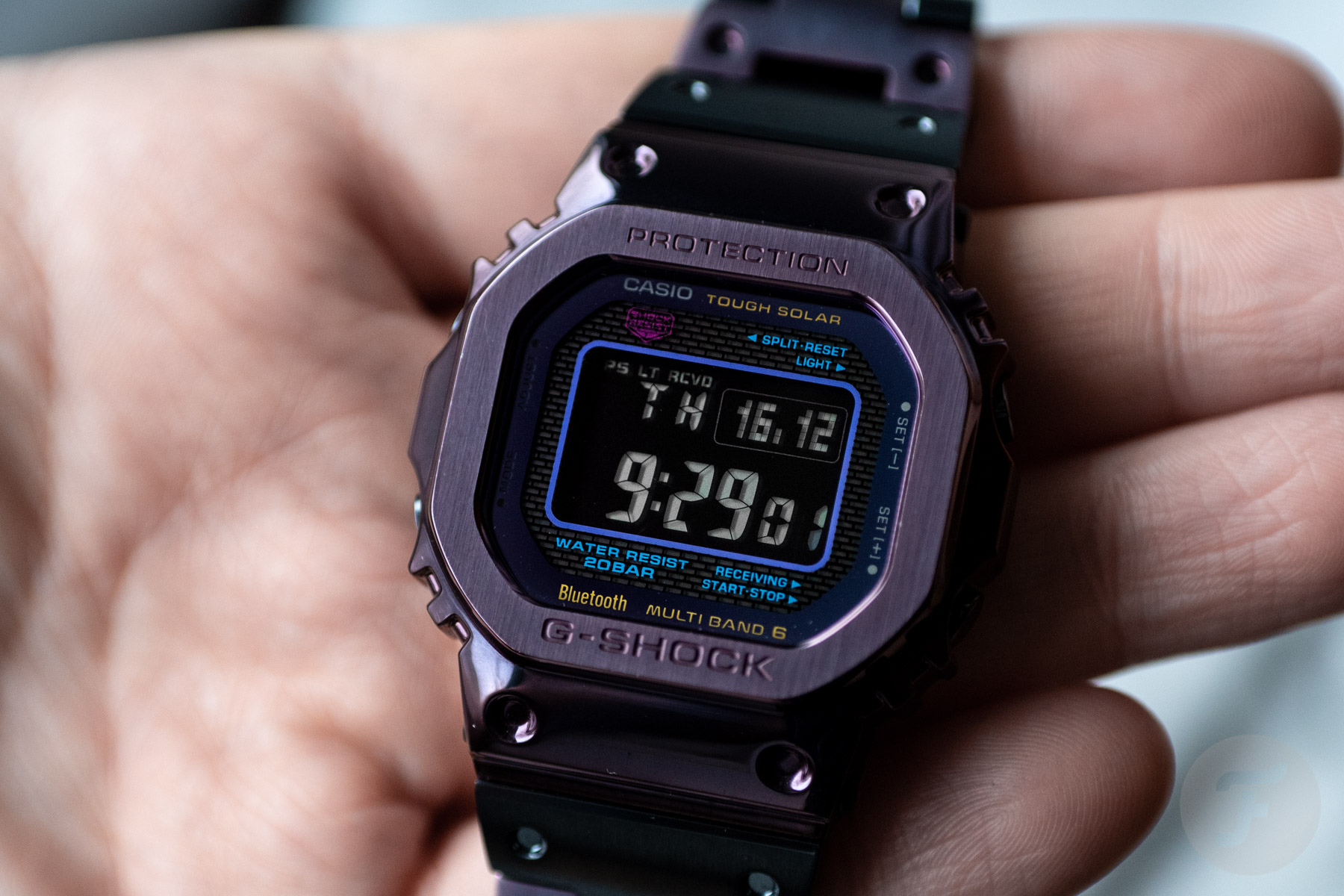 Earlier this year, I experienced my first metal square. I believe it was RJ’s very own GMW-B5000D-1ER, and boy, was I impressed. My only small gripe with it was that it was a bit too shiny and missing a little bit of color. And in this sense, the GMW-B5000PB-6 delivers the goods. It’s tough as ever, with all the bells and whistles, but it’s also an eye-catching, quirky beast!

I’ll spare you the story and most of the technicalities. What I want to cover here is how the watch felt on the wrist, and also how wearing the watch on my wrist made me feel. If you do want to know about the tech and the specs, check out Lex’s detailed coverage of the watch’s release here. Now, if you did take the time to dive into Lex’s article, the first thing you will have noticed is how different the GMW-B5000PB-6 Twilight Tokyo looks in my real photos of it, as opposed to in the renders and press release images. If you, like me, found the watch in those images a little too bright, you’ll be happy to see how it actually looks in the metal.

What you’ll find is that the watch is a bit of a dark knight. It wears its deep, dark, richly saturated steel armor in a way that truly lives up to the Twilight Tokyo name. The wizards over at Casio G-Shock have mastered the art of ion plating (IP), and they have put their expertise to good use in this piece. The stunning purple tones achieved are incredible. Playing with the light, they range from a bright magenta sheen to a blueish hue in the shadows. I cannot stress enough how special this one is in person. The contrasting links, which have more of a cool blueish purple tone, perfectly balance the look. With the satin-finished bracelet, it’s far from too shiny. And this, combined with the dark color scheme lends a subtle edge to the watch that the shinier chrome and gold models simply don’t have. 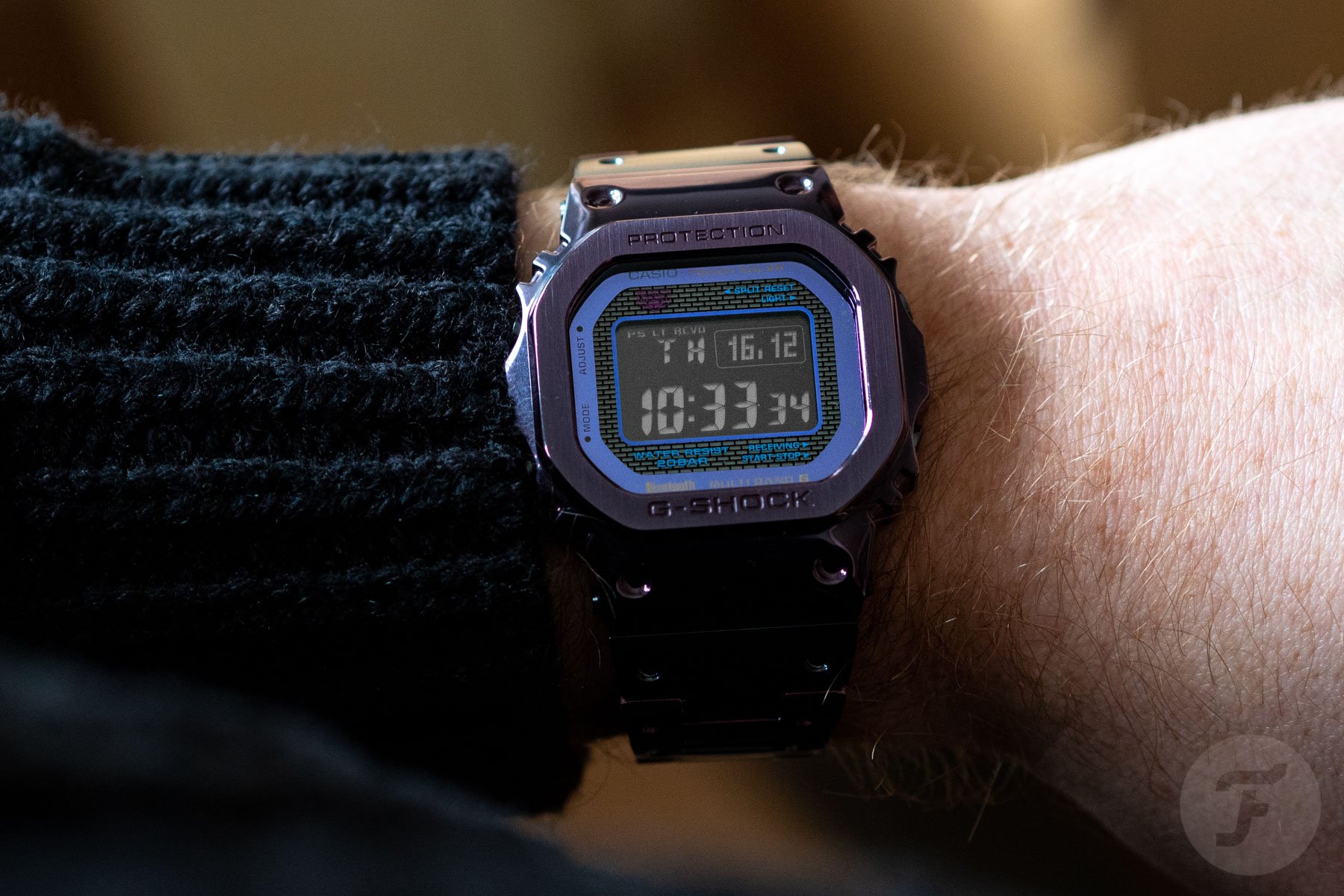 Once sized to your wrist, the bracelet is unbelievably comfortable. I don’t know about you, but the last place I expected to find a perfectly comfortable bracelet with a unique design and beautiful finishing was attached to a G-Shock. The way it is integrated into the case is fantastic. It tapers down to the clasp, which is equipped with milled elements for a better fit and comfort on the wrist. Is it rattly? You bet it is! To an almost exaggerated degree. But once on the wrist, it feels absolutely perfect. The watch sits balanced and steady on the wrist, with no rattle or hair pulling to report. If you are familiar with G-Shock squares, you’ll know that despite the generous dimensions (49.3 × 43.2 × 13mm), they fit the wrist extremely well. At around 165g, this model has a qualitative, weighty feel, similar to what you’d find with a mechanical watch.

Moving on to the watch itself, we find a nicely finished case with a bright polish all around. The only exception is the vertically brushed bezel, where the words “Protection” and “G-Shock” are deeply engraved. Four polished black IP buttons flank the case on its sides. The dial, printed under the mineral glass, is split into three sections. The outer edge is done a shiny purple color that matches the case and features white and yellow text. The mid-section, or solar element, has the traditional “brick-wall” pattern and features bright blue text and a magenta “shock resist” logo. Finally, a purple ring encircles the digital display. The mix of colors, textures, and detail add plenty of charm to this piece, making it anything but monochromatic. It’s a real eye-catcher and one that a number of people commented on when they spotted it on my wrist. 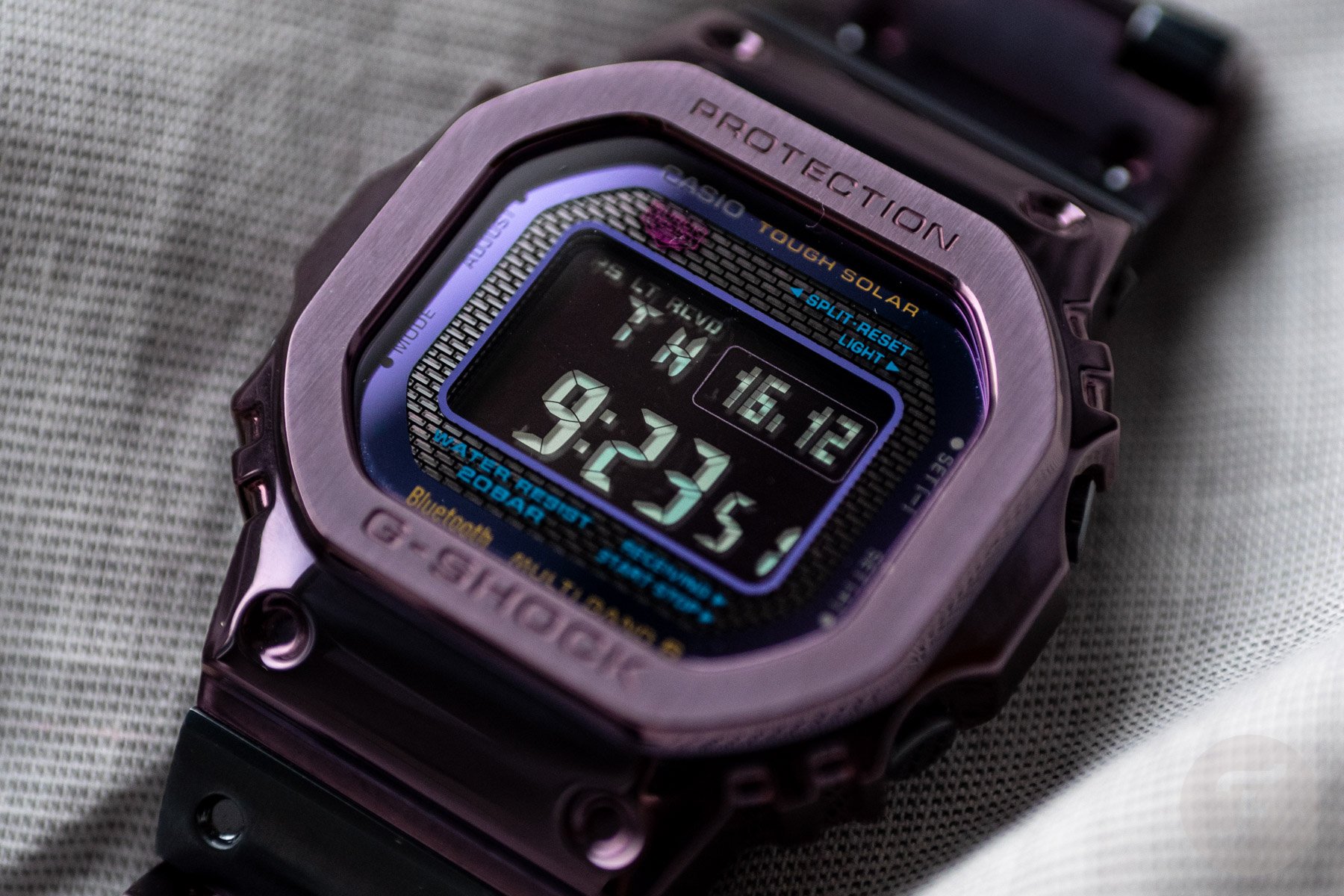 I would be remiss not to list at least some of the features that you get on the G-Shock GMW-B5000PB-6 Twilight Tokyo. As with all G-Shocks, it’s a heavy-duty, shock-resistant watch with 200m of water resistance. This particular model has a screw-down case back, which inspires even more confidence in this regard. It’s solar-powered, which means it will run for years on end when exposed to light. It will also run for 10 months without exposure to light, and for 22 months in its power-saving mode. The watch also self-calibrates once a day, accessing a nearby radio signal. You also get all the Bluetooth-enabled features, which means you can set up the watch from your smartphone. These functions include an automatic LED backlight, five world timezones, a chronograph, a countdown timer, and five daily alarms.

The impressive list of features of this €549 G-Shock is far too long to include here, but if you’d like to check it out, head over to the Casio website. 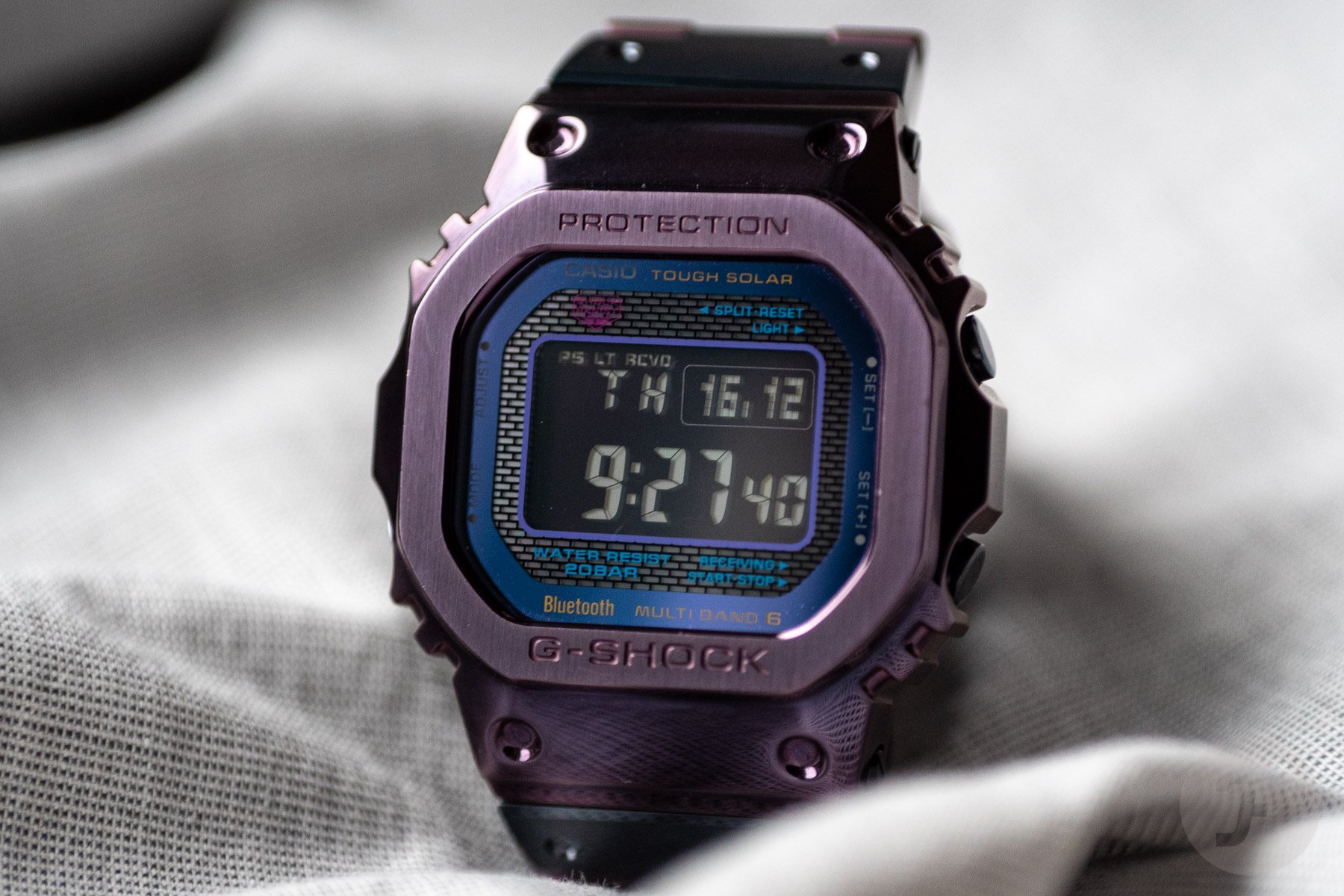 Finally, I will say that having worn this watch for a full week, it was both a struggle and a pleasure to go back to my resin square. Was it light, comfortable, and familiar? Yes. But was it also missing the qualitative heft, features, and charm of the GMW-B5000PB-6? Absolutely. I think it’s only a matter of time before I get myself one of these metal squares, and the purple Twilight Toyko is a strong contender so far. After all, Donatello was always my favorite Ninja Turtle! For now, I’d love to hear your thoughts on this stunner of a G-Shock in the comments below.