The Grand Seiko Hi-Beat SLGH002 watch is the latest in a long line of rootin’ tootin’ anniversary release from the hyperactive Japanese brand.

And I love it. In fact, I take that back. I adore it. And when you see the hands-on pictures we took of this baby when it passed through our headquarters in the Hague, I am sure you will too. But don’t be distracted by the “movement”. The watch we received to photograph was a pre-production non-working sample. The movement that will feature in this watch is a princely caliber, but, for now, we had to make do with a sweet sticker on the inside of the sapphire display window. I thought that was worth mentioning right off the bat, on the off chance anyone assumed Grand Seiko had filled the case with oil in pursuit of that oh-so-Ressence vibe… 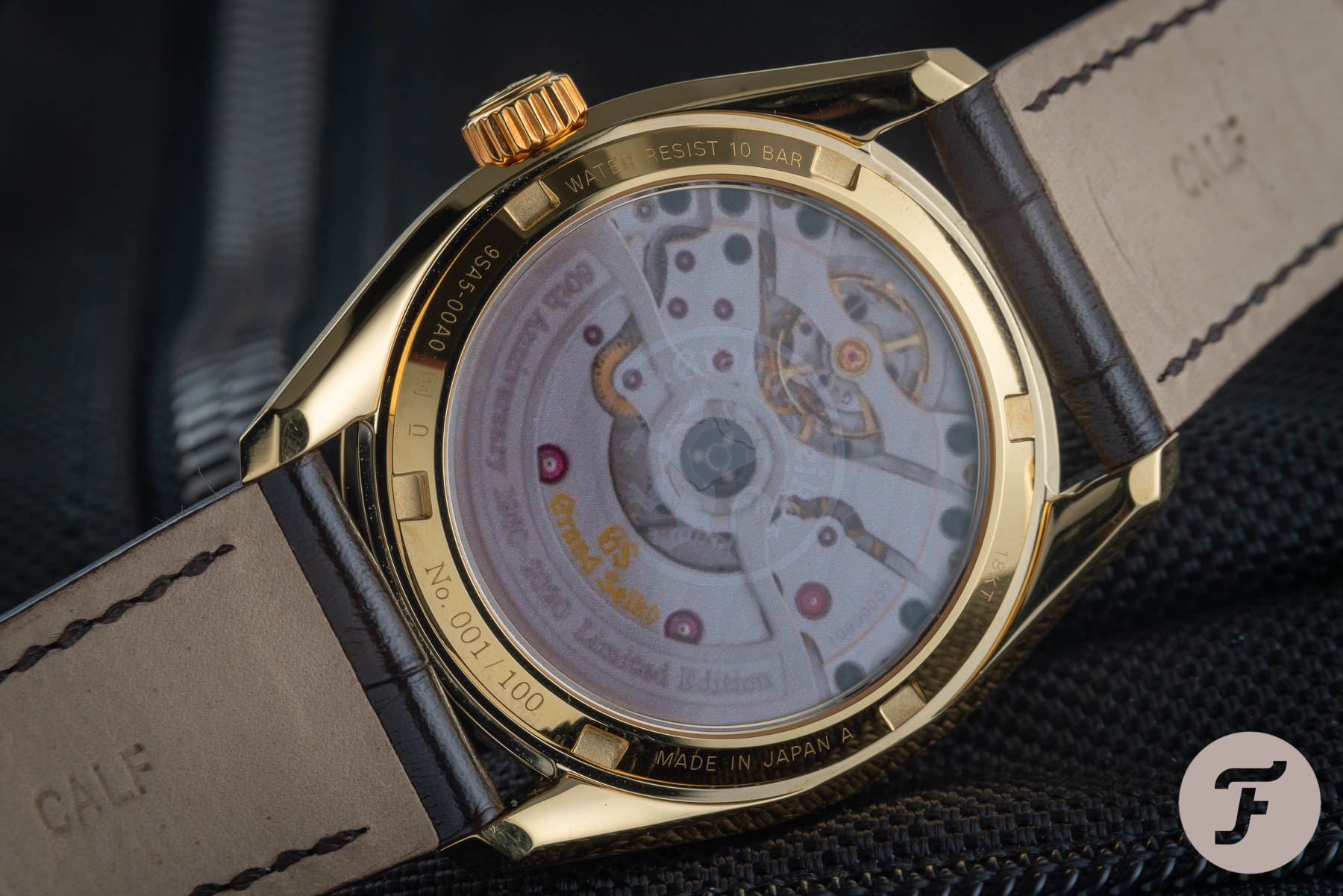 Not oil-filled; just a sticker.

The caliber itself, which is known as caliber 9SA5, is really the star of the show here. Although, it is easy for attention to be stolen entirely by the gorgeous, timeless case, dial, and handset of the SLGH002. But before I wax lyrical about the aesthetics of this anniversary ticker, let’s give this rather exceptional movement its due. 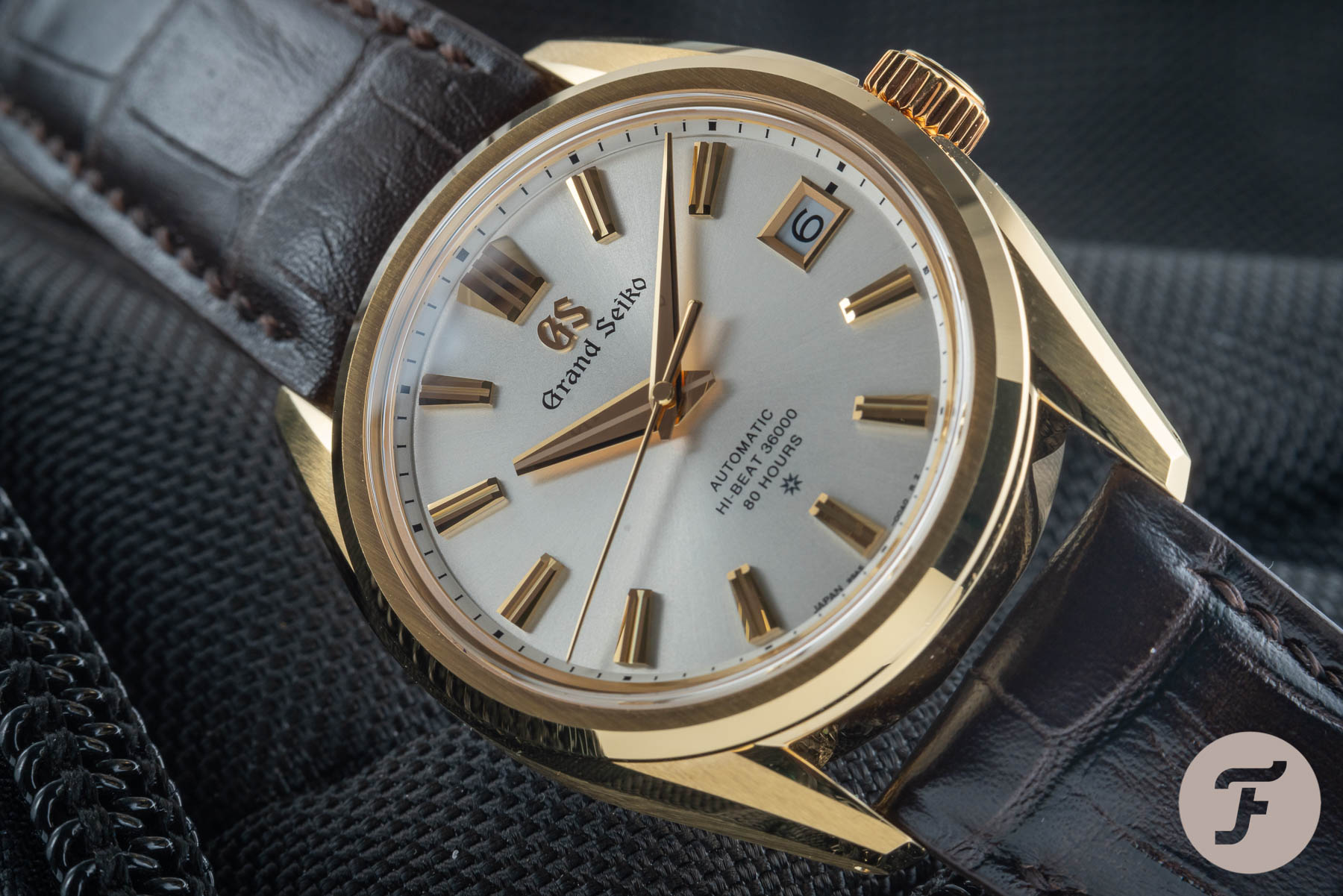 Caliber 9SA5 operates at 36,600vph. That means it is a “hi-beat” movement with a seconds hand ticking 600 times per minute (which sounds even more impressive than 10 times per second, don’t you think?). That results in a beautiful sweeping motion around the dial. But we’ve seen this before from many brands including Grand Seiko. What makes the 9SA5 within the SLGH002 special, however, is its thinness and power reserve. Both are massive improvements on previous models. What is weird about these two upgrades is that they rarely go hand-in-hand for what may be obvious reasons.

If those reasons aren’t obvious, allow me to make them so. Mechanical watches (both manual and automatic types) are powered by a mainspring. Mainsprings generate that power by being coiled tightly around a post that sits in the middle of a barrel that is connected to the winding crown. As you wind the crown, you tighten the spring. The spring wants to unfurl. That is its only desire in life. The bigger and stronger the spring, the bigger and stronger its desire to unfurl. But the problem with big, strong springs is that they take up a lot of space. 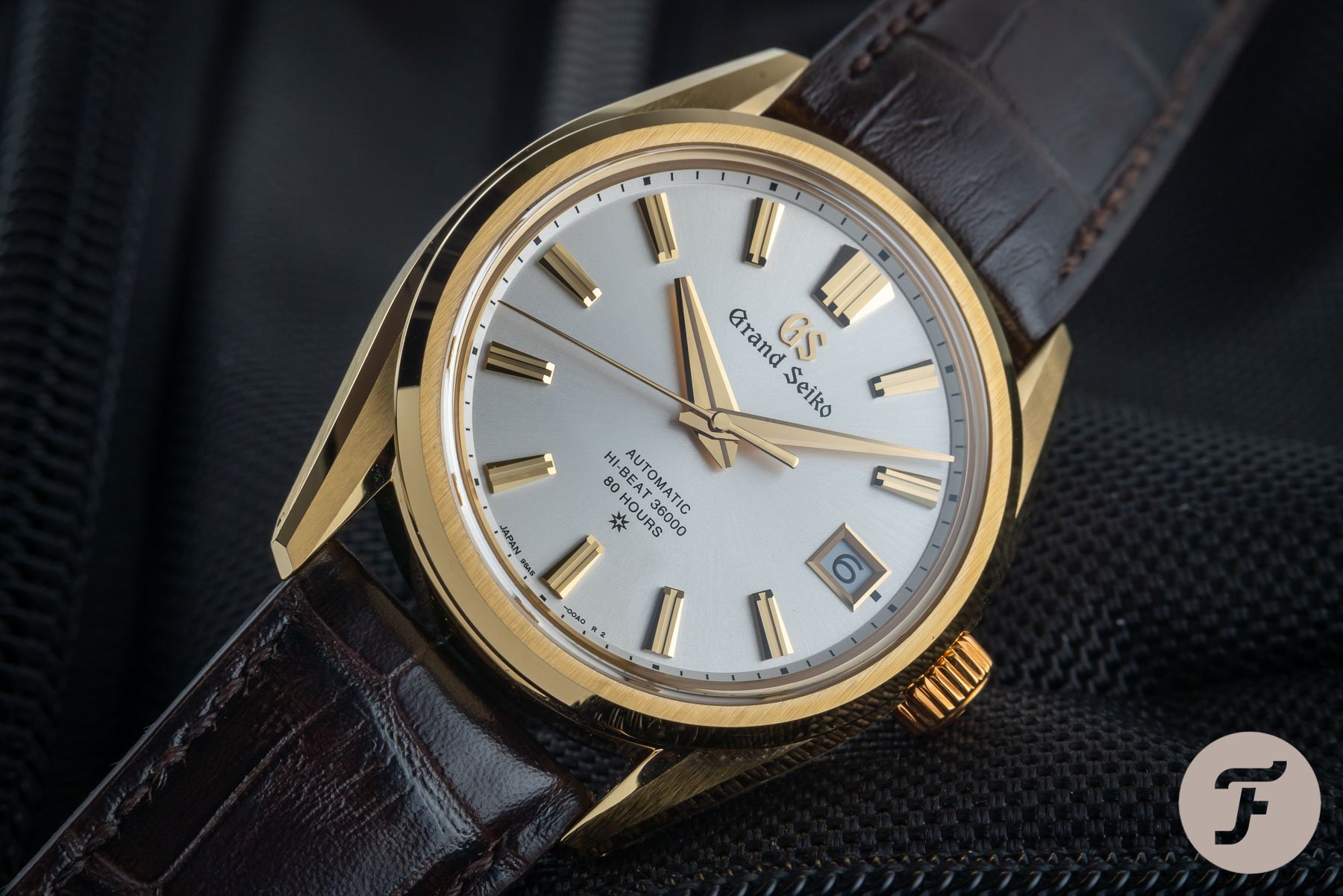 To reduce thickness, it is common practice to use a slimmer mainspring to save space in the movement. Similarly, to stretch the power generated by that slimmer mainspring further, brands often reduce the operating speed (which has an aesthetically adverse effect on the sweeping seconds hand). Here, however, we have the best of both worlds. Grand Seiko has used a twin-barrel system to boost the regular 9S- caliber series power reserve of 55 hours all the way to 80 while wrapping this new tech up in a package that stands just 5.18mm tall. 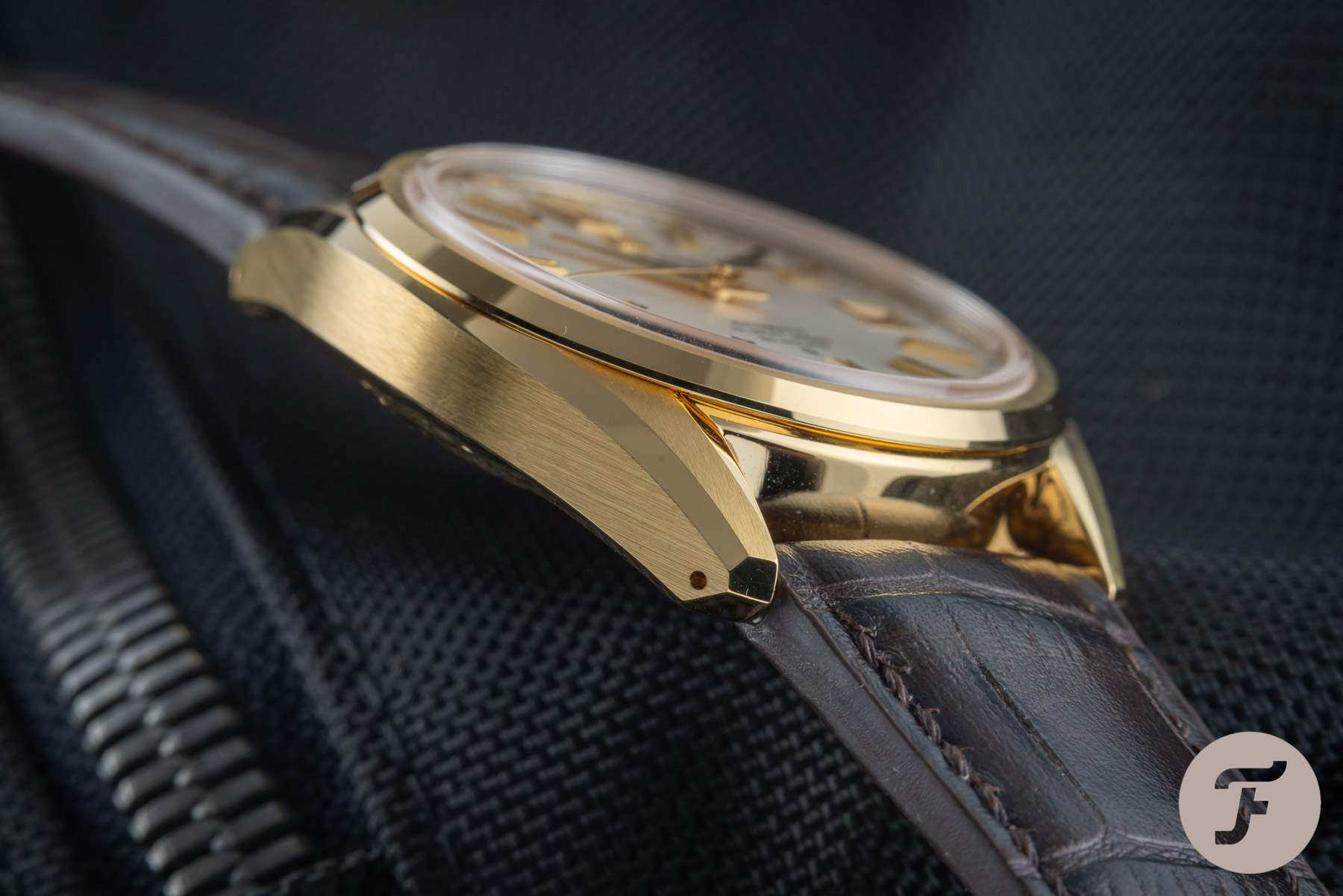 Better still, this slimness isn’t just thanks to the twin-barrel system. Grand Seiko has also designed an extra-flat gear train (with exceptionally tight tolerances to ensure optimal and uninterrupted operation) along with ultra-efficient escapement components. These are genuine long-term solutions to the common problems found in wristwatch design, most notably the presence of intense friction. To read a really good breakdown of the new movement, check out RJ’s recent release article here.

…exactly what we want to see from the top-level brands.

In summary, these components, thanks to their size and materials, greatly reduce friction within the movement. This should extend the run time between services and result in better all-round performance, which is exactly what we want to see from the top-level brands. 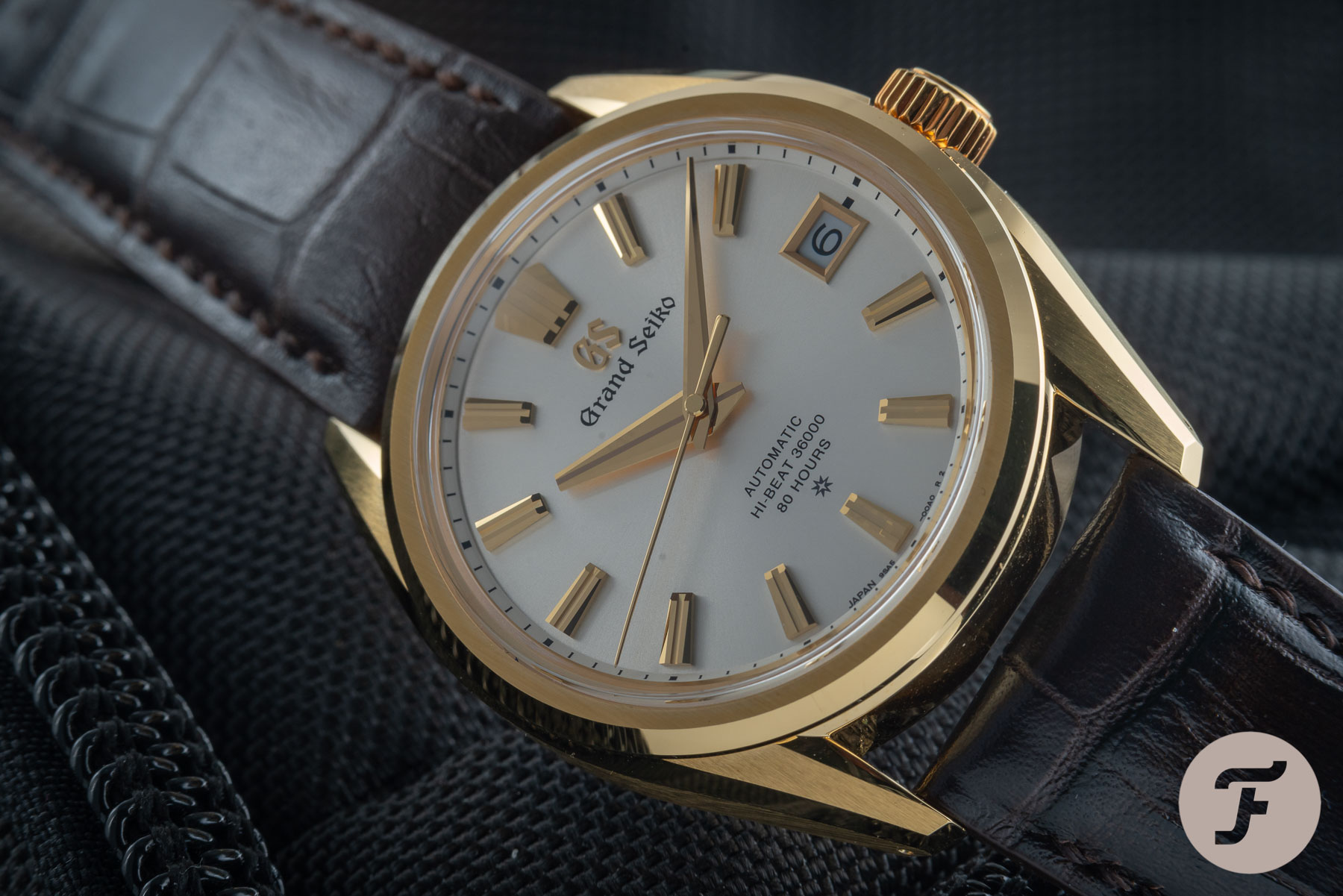 If you don’t like gold watches, this obviously isn’t for you. But if you, like me, have a collection replete with stainless steel sports watches because you like that aesthetic and simply never thought such a dynamic case silhouette would look right in yellow gold, this piece might pique our interest. I think this design is timeless. The addition of 18-carat gold indices (indicated by the star above 6 o’clock) really does make this one for the ages.

…my favorite element of this design has to be the handset.

In fact, this watch has turned me so far towards the idea of a yellow gold timepiece that I wish, wish, wish that Grand Seiko offered reference SLGH002 with a gold beads-of-rice bracelet. That, to me, would make this the perfect modern interpretation of those achingly cool (and reasonably priced) gold-plated Omega Seamasters from the ’60s.

Seriously, though, my favorite element of this design has to be the handset. The length of all three hands is, in my opinion, spot-on, and the design — with chamfering and polishing of the very highest standard — is finished off by the frosted strip right down the middle of the hour hand, which provides visual clarity as well as bucketloads of character without even coming close to being too much. It’s a masterstroke. 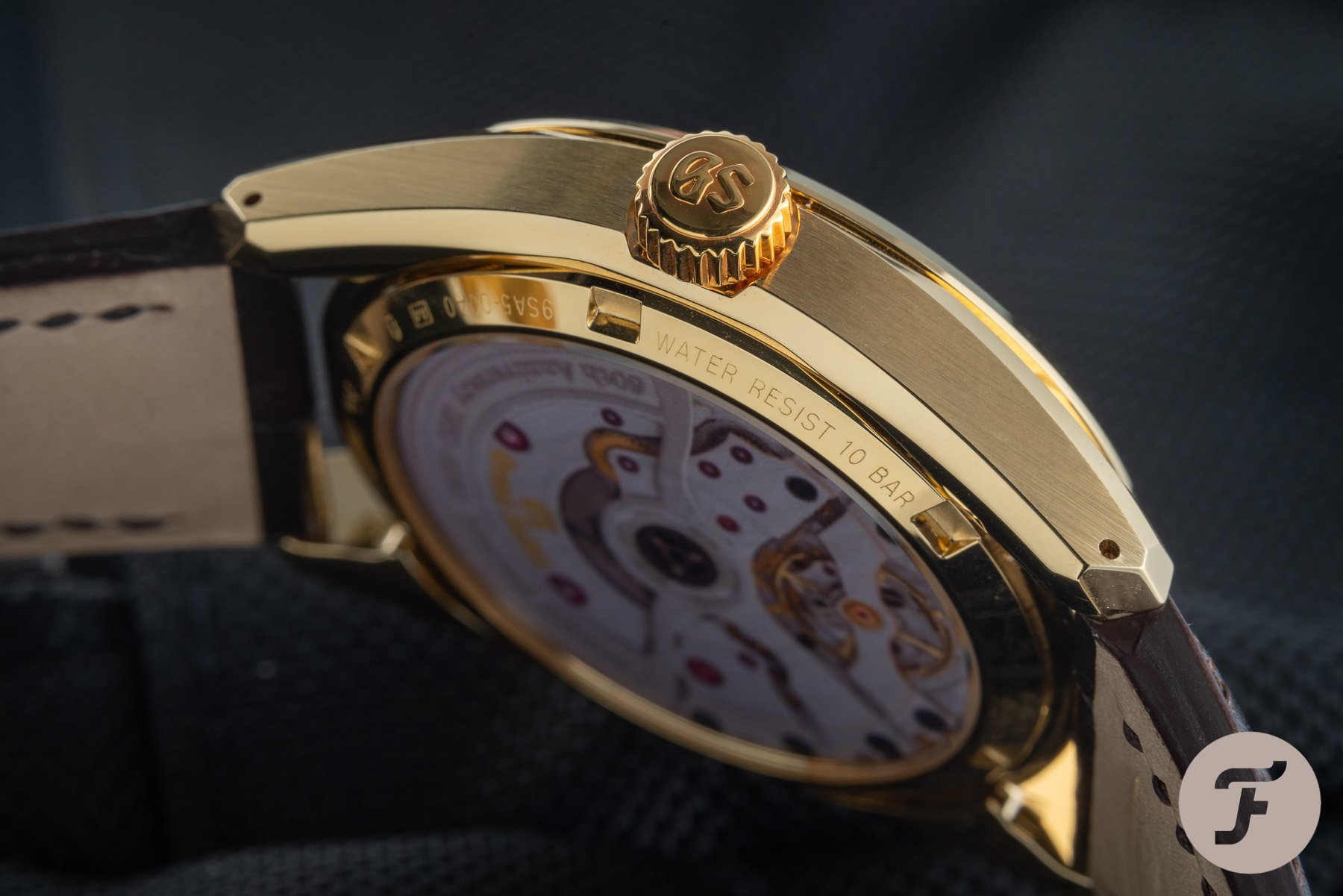 Do you remember checks (cheques in the UK)? We used to pay for things — often expensive things — with checks. Nowadays, people rarely (if ever) use such a medium, but whenever I see a piece like this I feel like reaching for mine. Why? I think because a checkbook enables you to leap over that mental hurdle having to hand over a large wad of cash often erects in your mind. There is distance between you, your actions, and the actual sum involved. In this case, that sum is a whopping €45,000. I’m not going to pretend I have that kind of change lying around the house (obviously, if I did, I would have already spent it on this watch). 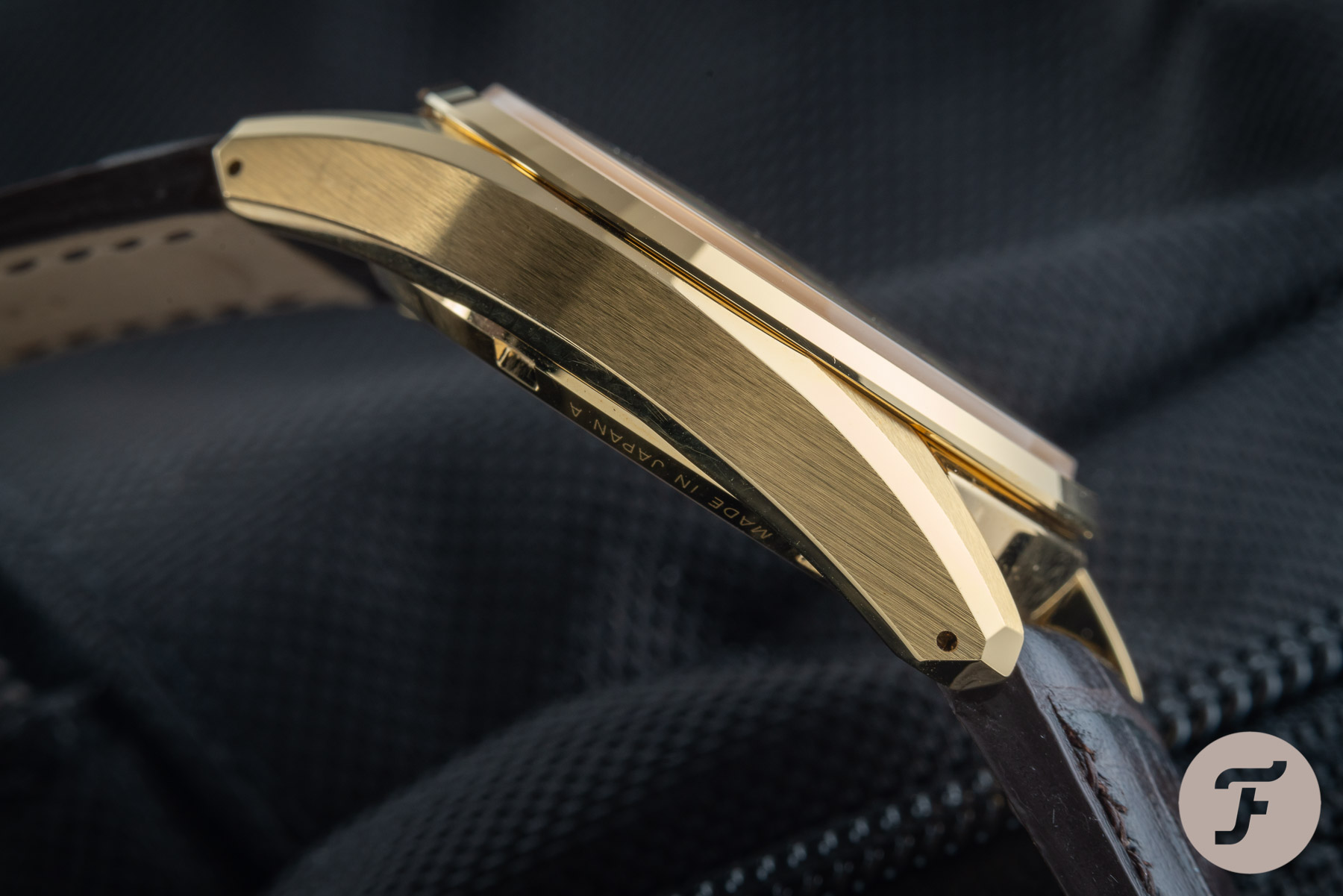 That kind of price makes reference SLGH002 out of reach for most people. That is a shame because it is a really lovely watch. However, often the best ideas from the upper echelons make their way down to an affordable level in time. Hopefully, the positive response to this model results in more pieces of this style a little lower down the catalog’s price list. If you are lucky enough to have 45k kicking around in an old gym bag, you’ll have to move quickly. Only 100 of these pieces will be made.

I’ve got a feeling that is about the right amount for such a wearable-but-pricey piece. I think GS has struck the right balance. Let us know what you think of this watch and whether it would be your choice if we gifted you 45,000 to spend on watches and watches alone. I can’t wait to read your shopping lists! Learn more about Grand Seiko and reference SLGH002 here.