A black-dialed model joins the popular "Birch" lineup, and this time, it comes in titanium
Jorg Weppelink
comments 19
Share

We have discussed the Grand Seiko Evolution 9 collection quite a lot here at Fratello. The Japanese brand’s collection of modern timepieces with new case designs features quite a few remarkable releases. My personal favorite is the SBGE285 “Mist Flake” GMT. Another much-talked-about release from the same collection is the SLGH005 “White Birch”. It was followed by the Spring Drive version nicknamed the “White Birch II”. Today, we see the release of the black-dial SLGH017 “Night Birch. The twist to this new release is that it is executed in titanium.

It has been interesting to see all the different Grand Seiko Evolution 9 releases. The combination of modern designs and new movements has led to some new Grand Seiko favorites. As mentioned, I love the monochromatic SBGE285 “Mist Flake”. It would be one of two Grand Seiko models that I would love to add to my collection, the second being the SBGA413 with its mesmerizing pink dial. While I found the new GS diver and chronograph introduced at Watches And Wonders this year less captivating in terms of design, the two Evolution 9 “White Birch” models are exquisite timepieces. The new “Night Birch” builds further on the theme of the “Birch” models. Let’s check it out. 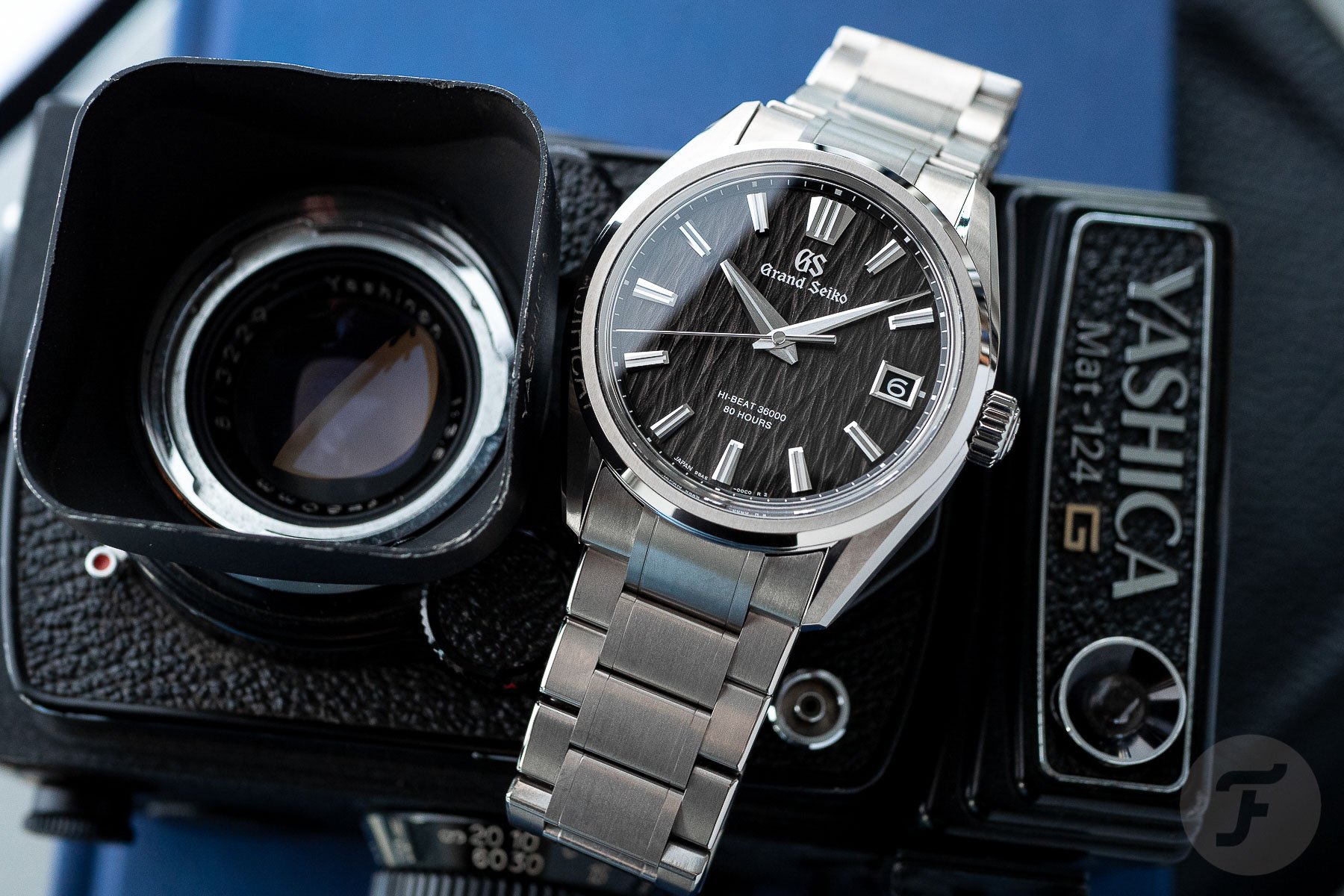 The inspiration for the “Night Birch”

Grand Seiko often finds inspiration for its dials in the areas surrounding the studio in Shizukuishi where all Grand Seiko mechanical watches are crafted. As a result, we always get poetic explanations for the often stunning dials. This time, it’s no different. The inspiration for the black version of this “Birch” dial comes from the atmosphere of the white-birch forests on the Hiraniwa Plateau at night. 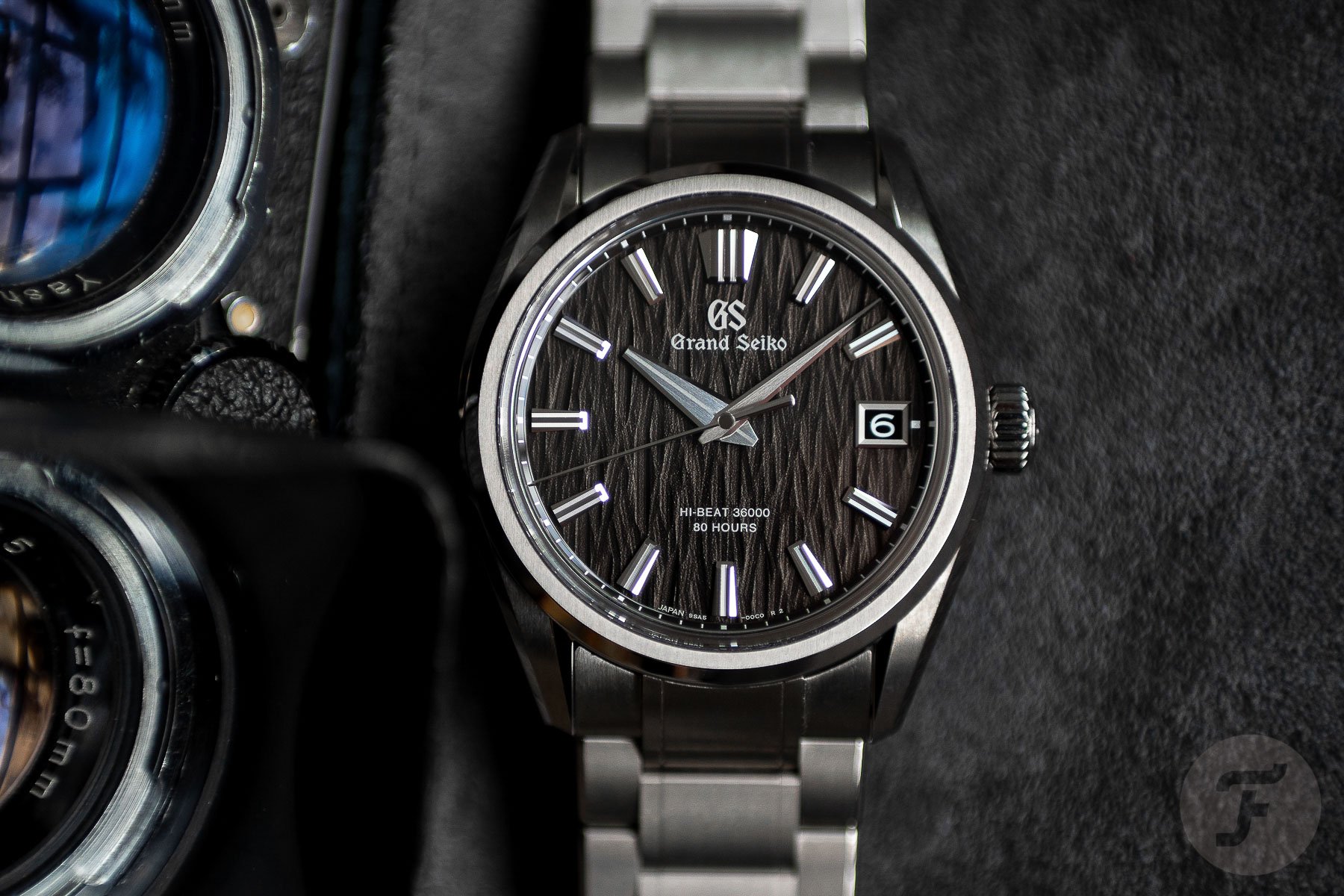 In essence, it is a black version of the “White Birch” dial. It features the same stunning structural pattern that graces the white-dial models. As most of you will know, seeing a watch in real life can make all the difference. Nacho and I had a chance to witness the SLGH017 up close, and it is nothing short of stunning. You have to take your hat off to Grand Seiko for the brilliant level of craftsmanship that the brand displays with its dials. The dial changes appearance depending on how the lights hit it. But play a little with the light, and the black dial comes to life in a way that I’ve hardly seen with any other black dial. It is a thing of sheer beauty. 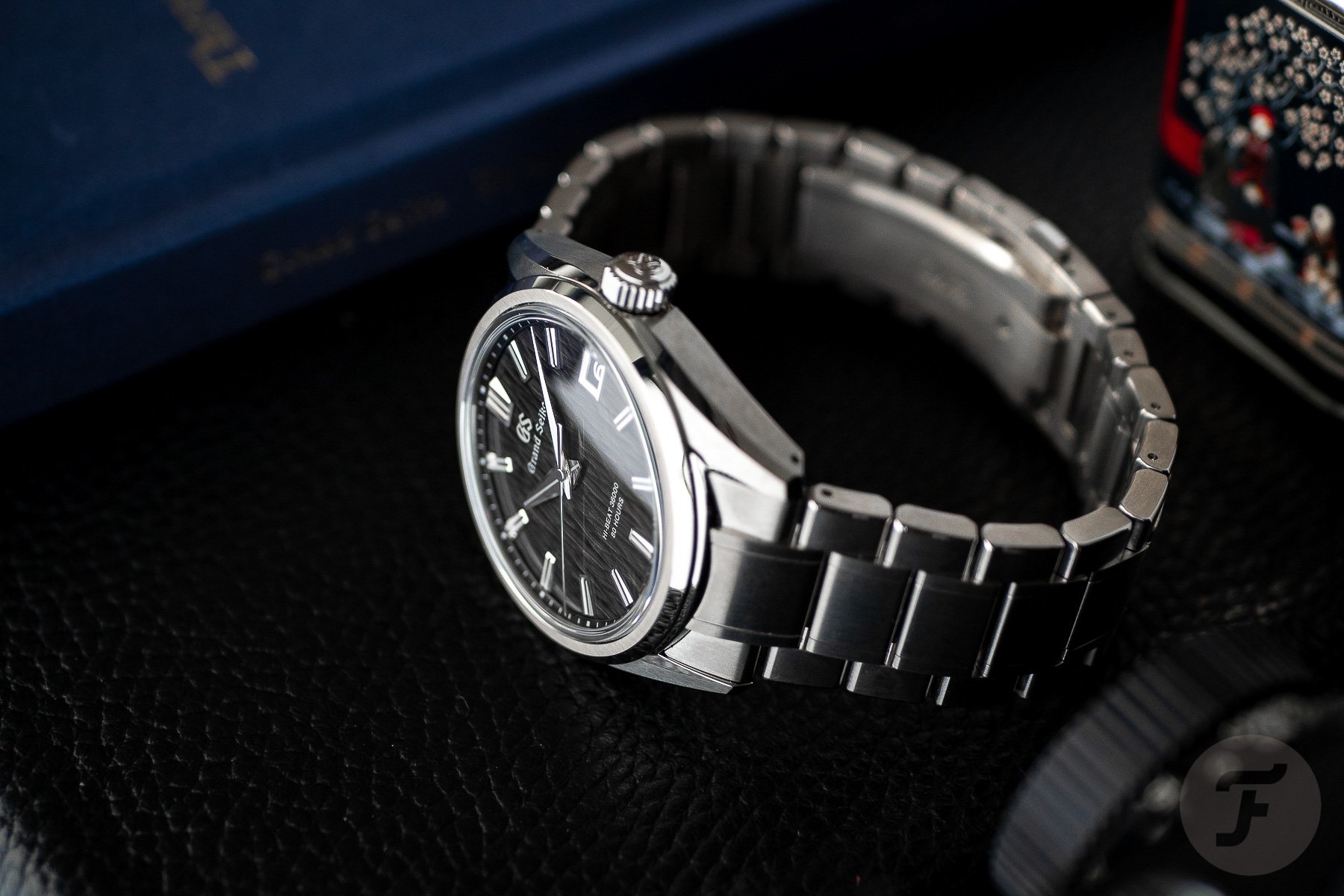 Titanium instead of stainless steel

When it comes to the specs of the SLGH017, there is a lot that we already have seen before. But there is one big difference compared to the two “White Birch” models. Whereas those were executed in stainless steel, this “Night Birch” features a case and bracelet in titanium. If you have seen a Grand Seiko in this metal before, you’ll know that the brand’s high-intensity titanium is slightly different in color compared to stainless steel. Every time I see one, though, I am surprised that the difference in appearance is not as big as with other brands. 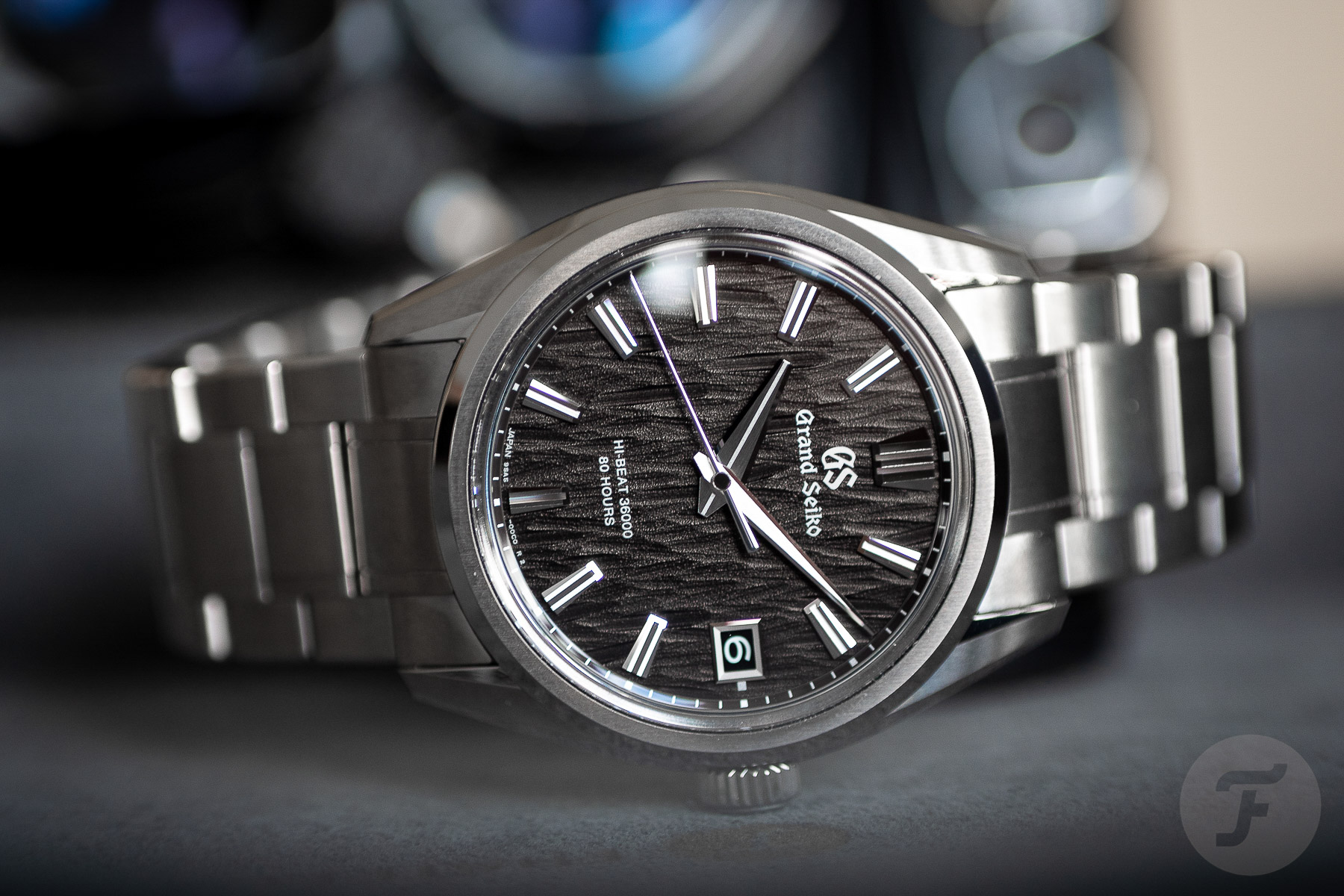 Additionally, the level of finishing is always brilliant, even with Grand Seiko’s titanium timepieces. It creates a great contrast between the Zaratsu-polished and brushed components. Just looking at the watch, the polished portions might even have you mistaking this for a stainless steel model. As soon as you pick it up, however, the weight gives away that it’s lightweight titanium. Why Grand Seiko has chosen to release a titanium model next in the “Birch” lineup is a bit of a mystery, to be honest. It would have made sense to add a stainless steel version with a black dial in line with the “White Birch”. But, for some reason, the brand chose differently. 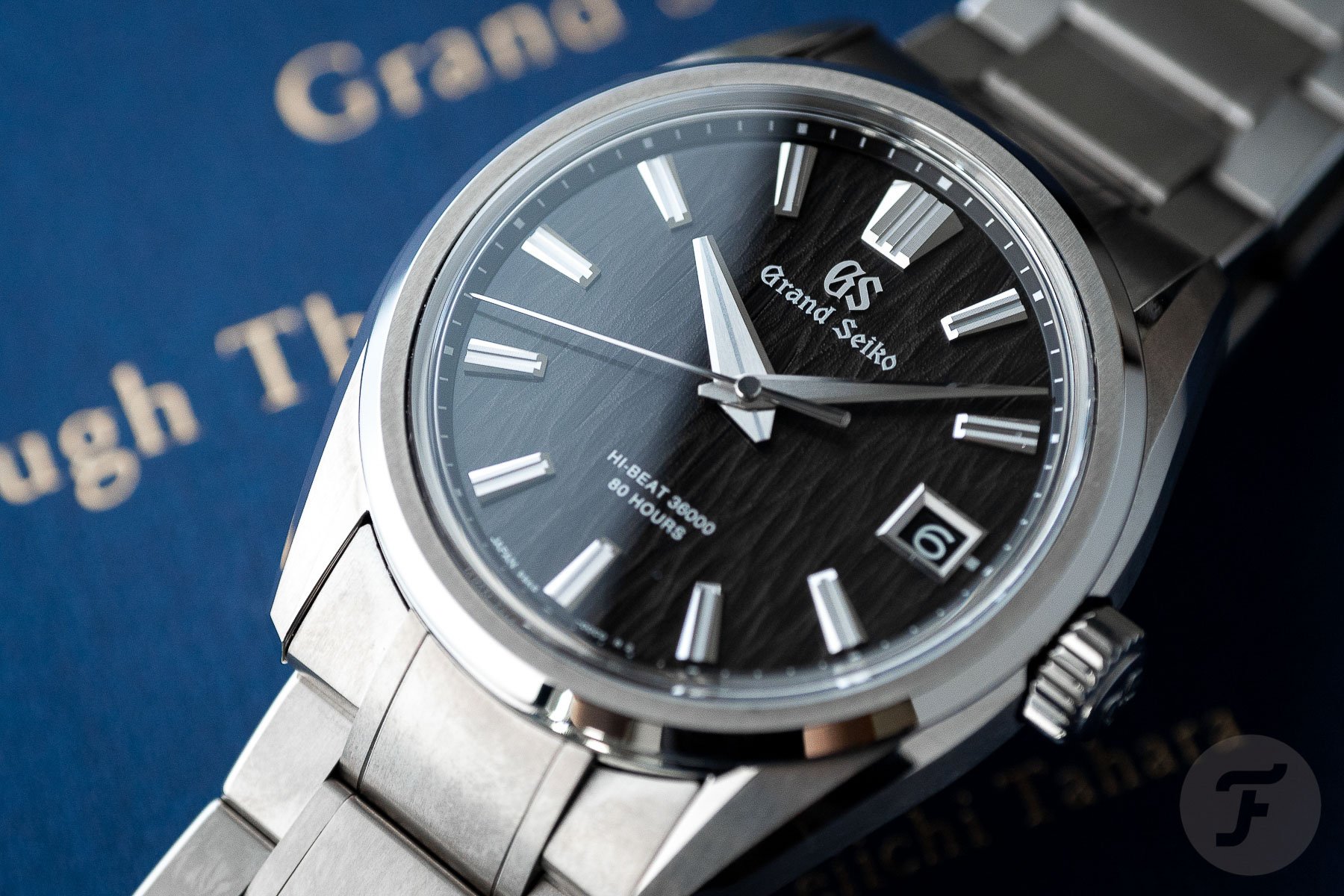 A familiar set of specs

Despite the different materials used for the case and bracelet, the specs are similar to the stainless steel model. The watch features a 40mm case that is 11.7mm thick. It has a lug-to-lug of 47mm, and the lug width is 22mm. I love the angular lines of this new Evolution 9 case a lot. They give it a modern feel that is very different from the iconic 44GS-style and 62GS-style cases that we love so much. Personally, I think it’s fantastic to see these new case designs for the collection. They perfectly show that Grand Seiko is still looking forward in terms of design. 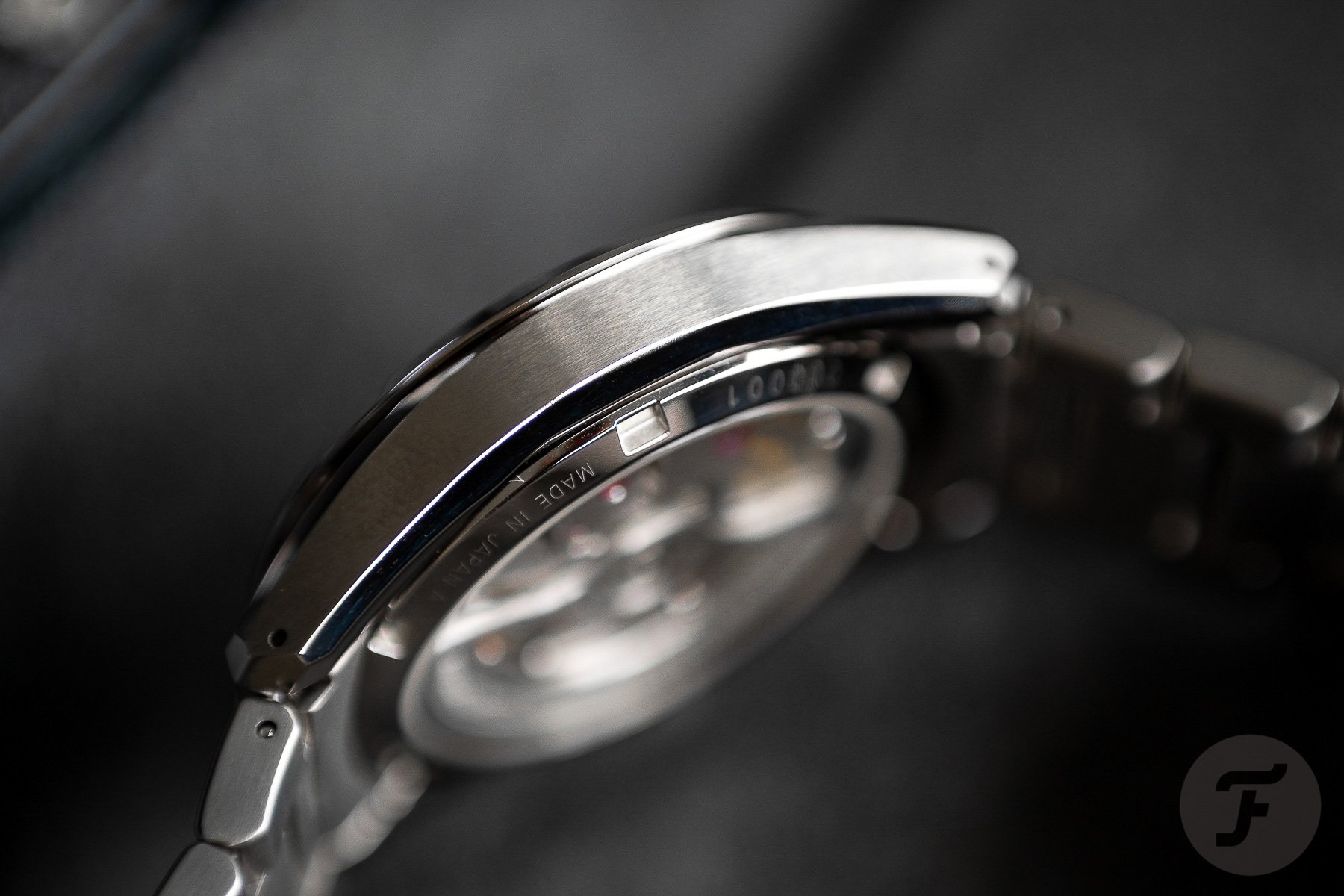 When you see the case, the one element that immediately stands out is the brushed bezel. From the bezel, your eyes are drawn inward to the brilliant applied markers. The thick indices are executed to perfection. In their size, thickness, as well as their finishing, they are simply stunning to behold. Grab a loupe, and you will be reminded why Grand Seiko is praised so highly for its immaculate finishing. 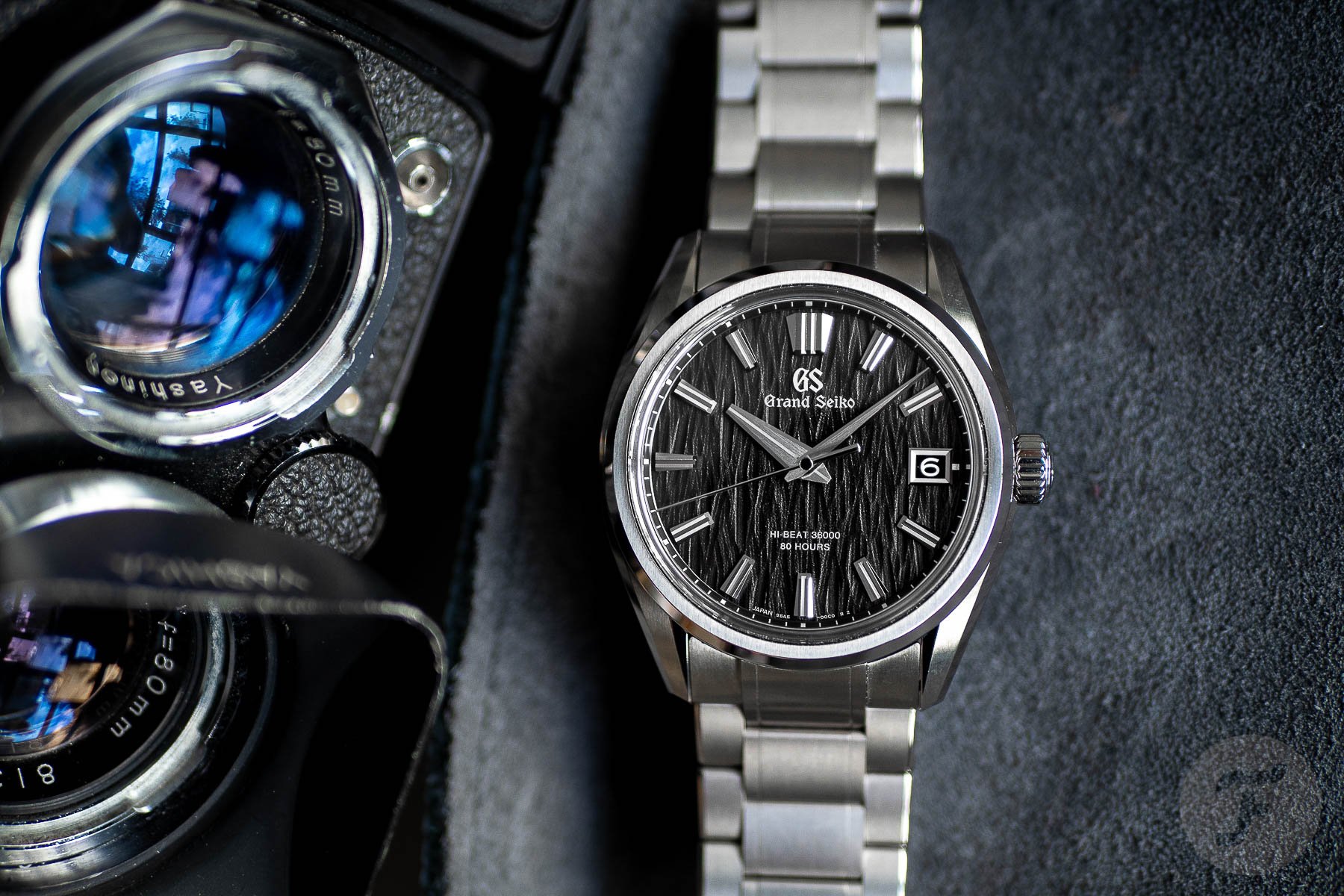 From the markers, your eyes will further travel across the dial, meeting the razor-sharp handset. Personally, I love the hour hand, in particular. With its substantial thickness and chopped-off end, it has a ton of character. Additionally, it complements the other slimmer hands perfectly to create one of my current favorite sets of hands. As you can see, the date window is neatly tucked away at 3 o’clock. It fits in perfectly and stands out when you need it to without intruding on the overall design of the dial. And what a stunning dial it is! 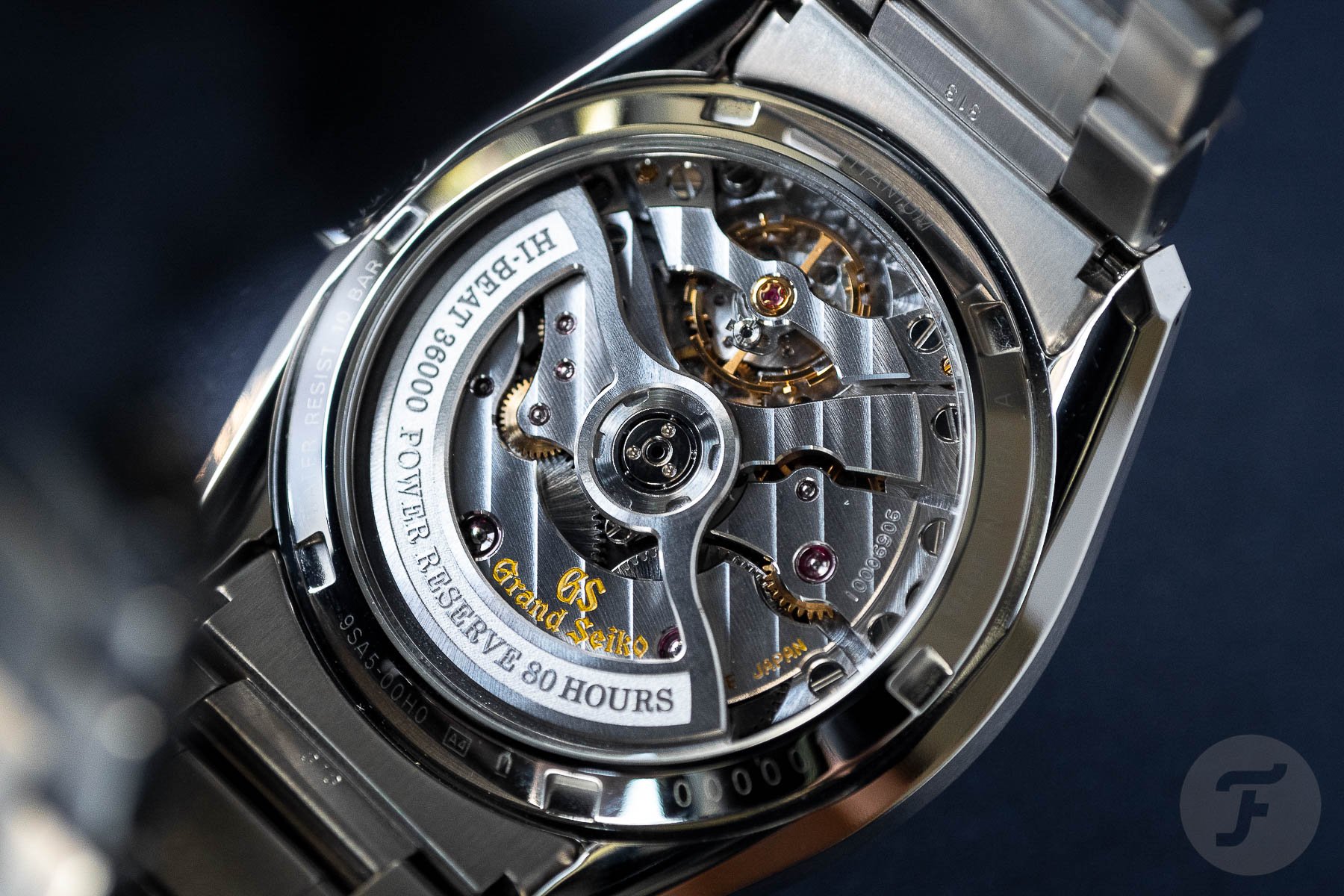 If you turn the watch around, you can see the Grand Seiko 9SA5 movement through the sapphire case back. It’s the same Hi-Beat movement that is used for the SLGH005 “White Birch”. As Robert-Jan explained in his review of the “White Birch”, it was first introduced in 2020. The automatic movement features the Dual Impulse escapement. As RJ wrote, “It is a clever mechanism that makes the escapement more efficient. It is able to transmit power directly from the escapement wheel to the balance and in the other direction via the pallet fork.” 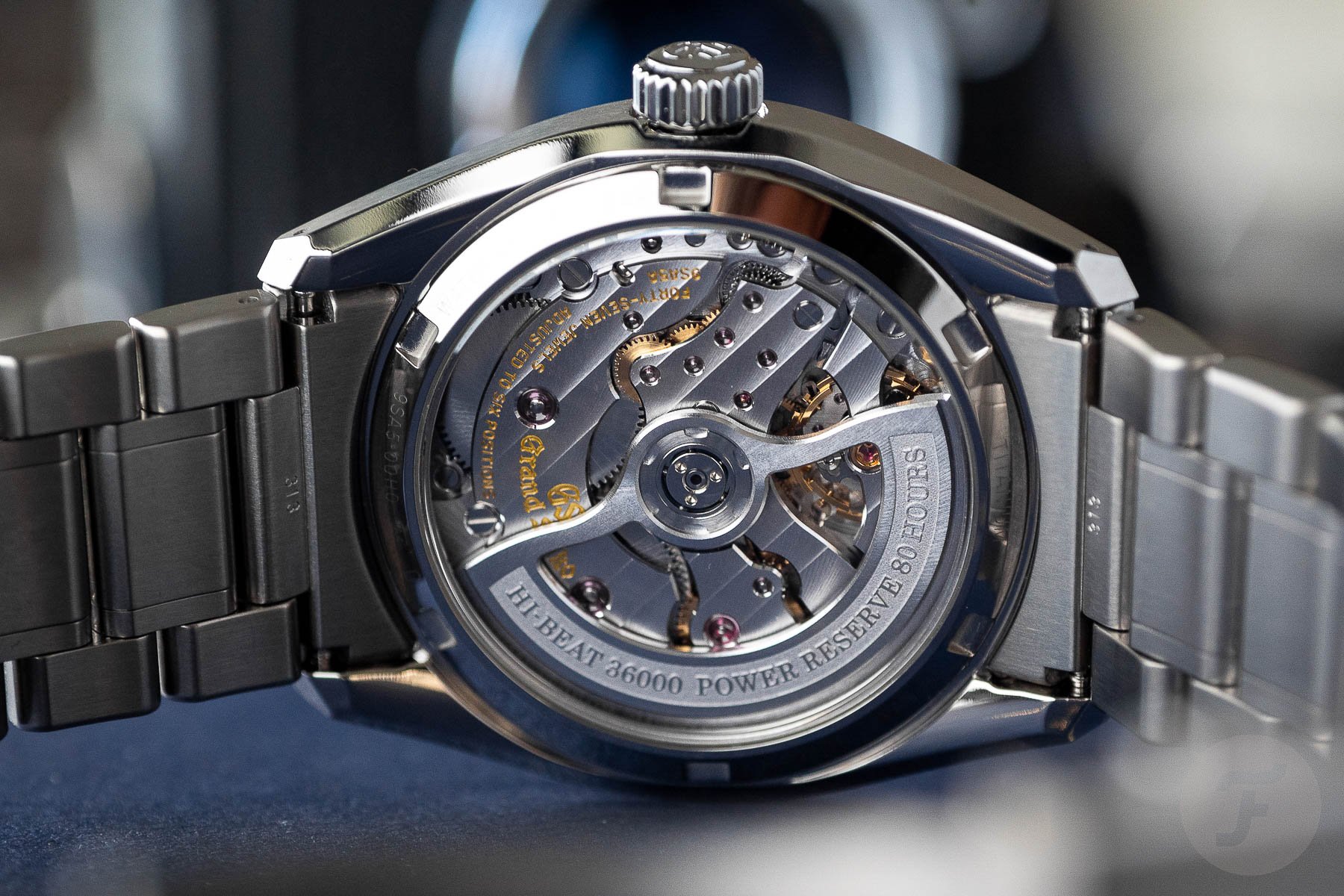 The 9SA5 contains a free-sprung balance that Grand Seiko developed especially for this caliber. It allows for higher precision over longer periods of time and provides more shock resistance and less friction. The movement comes with an overcoil hairspring instead of the flat hairspring that is used for the other Grand Seiko 9S movements. The brand decided to make this switch after strict tests concluded that the overcoil hairspring allowed for more stable operation in every tested position. As a result, it improves the constant performance of the movement. 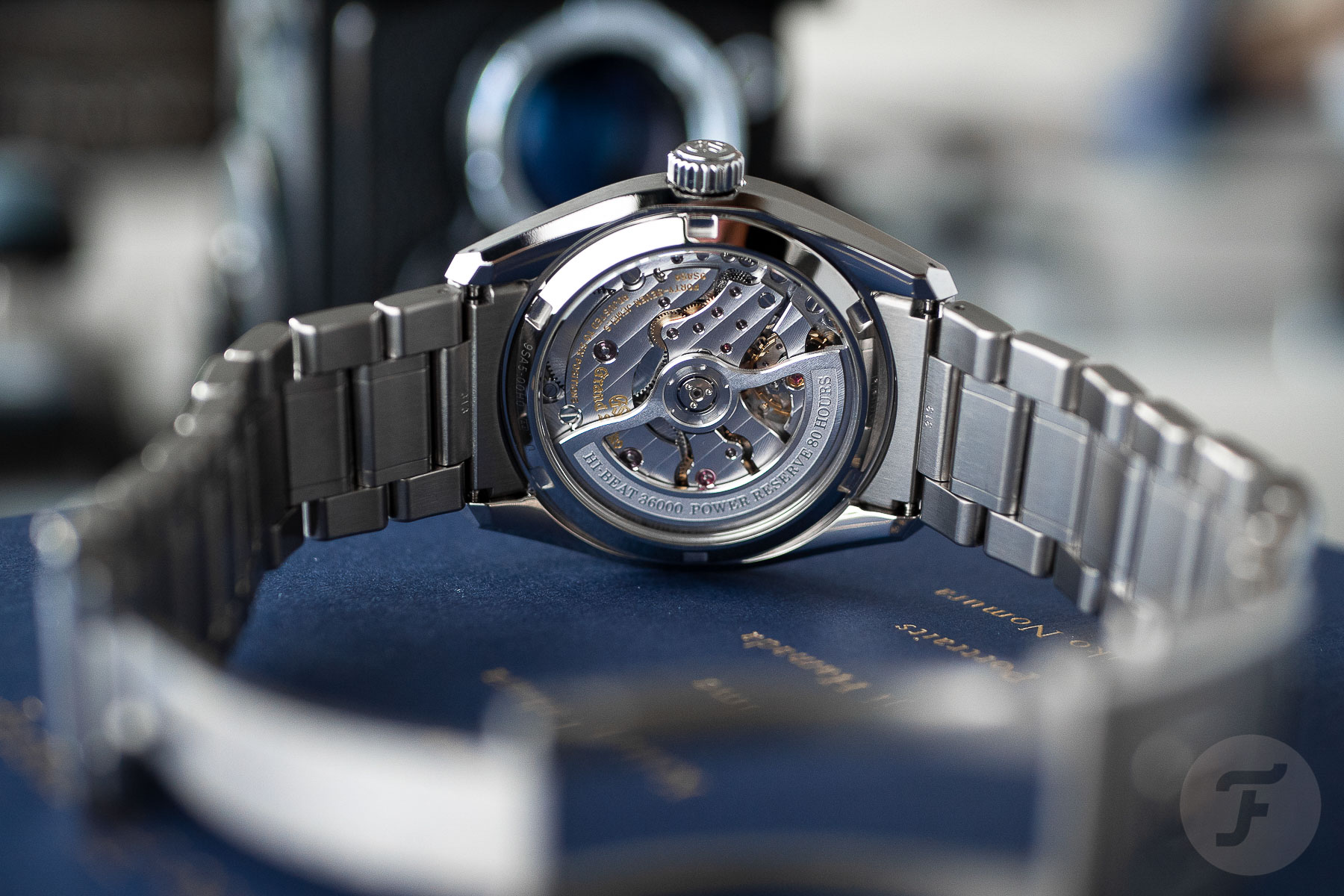 In terms of specs, the movement operates at 36,000vph and provides 80 hours of power reserve. As far as accuracy goes, the caliber runs between +5 and -3 seconds per day on average. However, as most of you will know, Grand Seiko is rather conservative with the numbers. Therefore, the actual performance is likely even better than the brand states. It almost goes without saying that the accuracy falls within chronometer specifications of +6/-4 seconds per day.  As you would expect, the finishing of the movement is also a joy to see. The bridges feature Côtes de Genève decoration, where the main plate features perlage decoration. 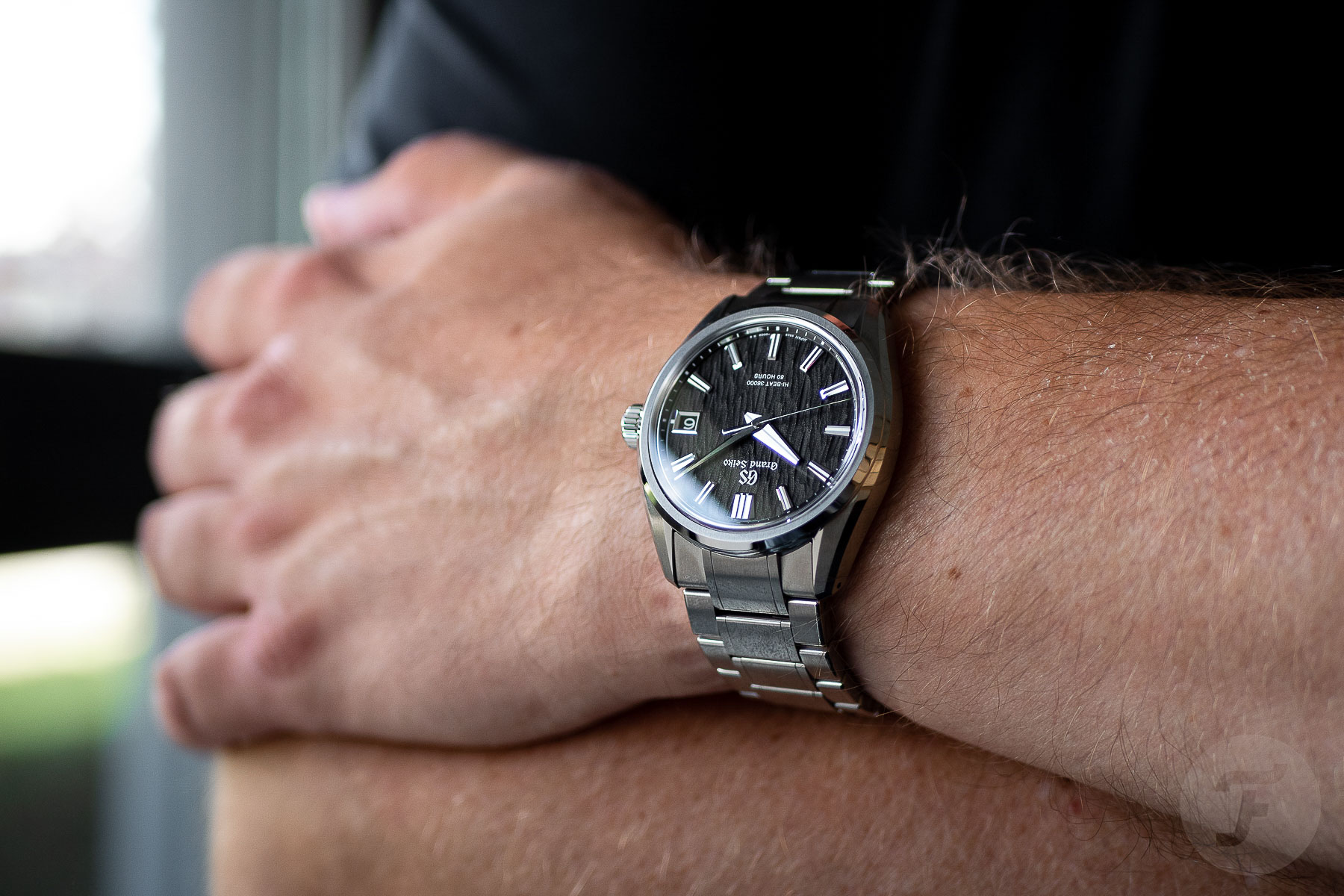 My impressions of the SLGH017 “Night Birch”

We didn’t have a chance to take the watch for a longer review, but putting the watch on your wrist quickly makes you realize that this is a stunning timepiece. I personally would pick this black-dial version over either of the two “White Birch” models. The titanium bracelet is the same design as is used for the stainless steel versions. It features a fully brushed top surface with a little polished bevel. Additionally, the sides are polished as well. The quality and feel of the bracelet are incredible and ensure that the watch is a joy to wear. 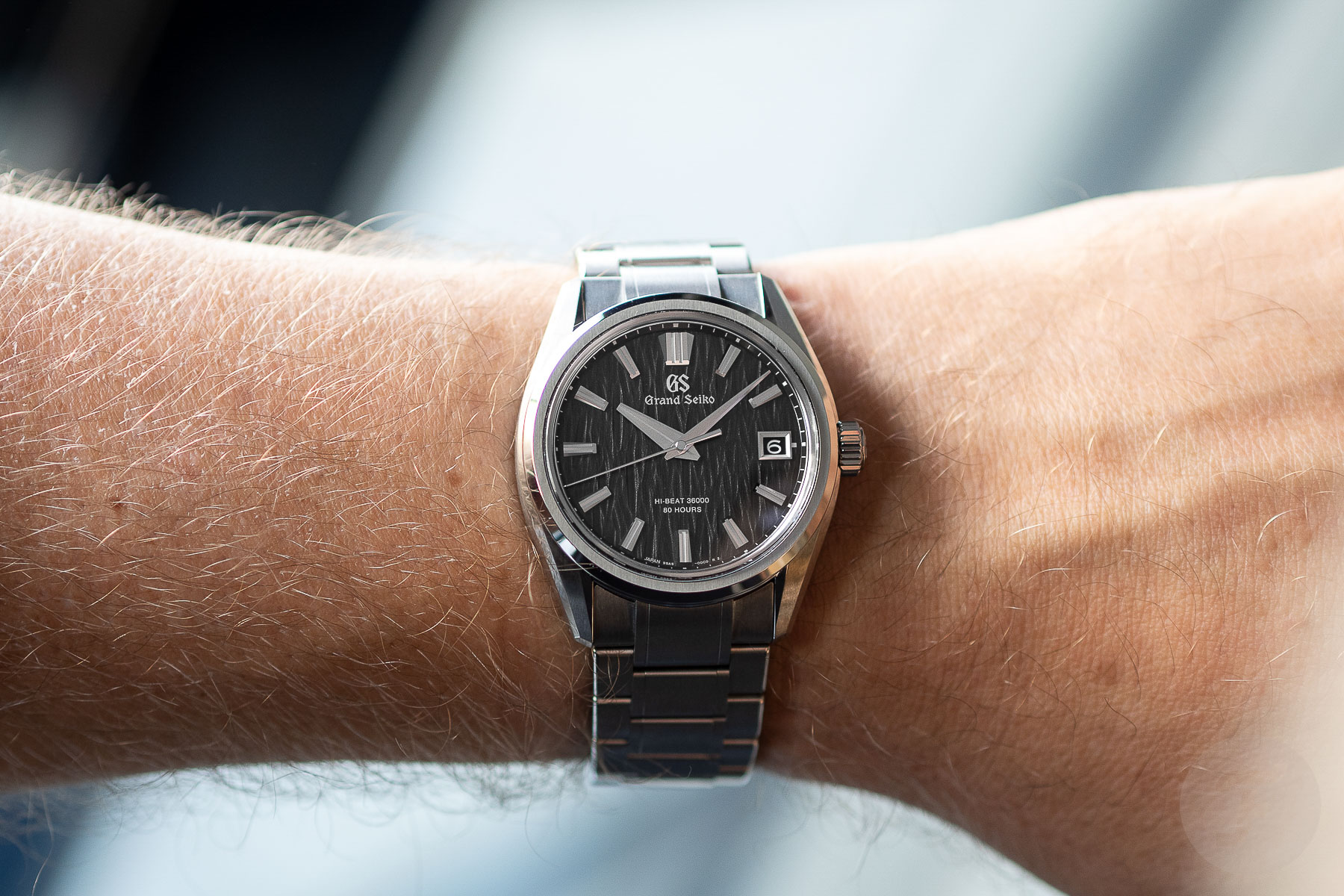 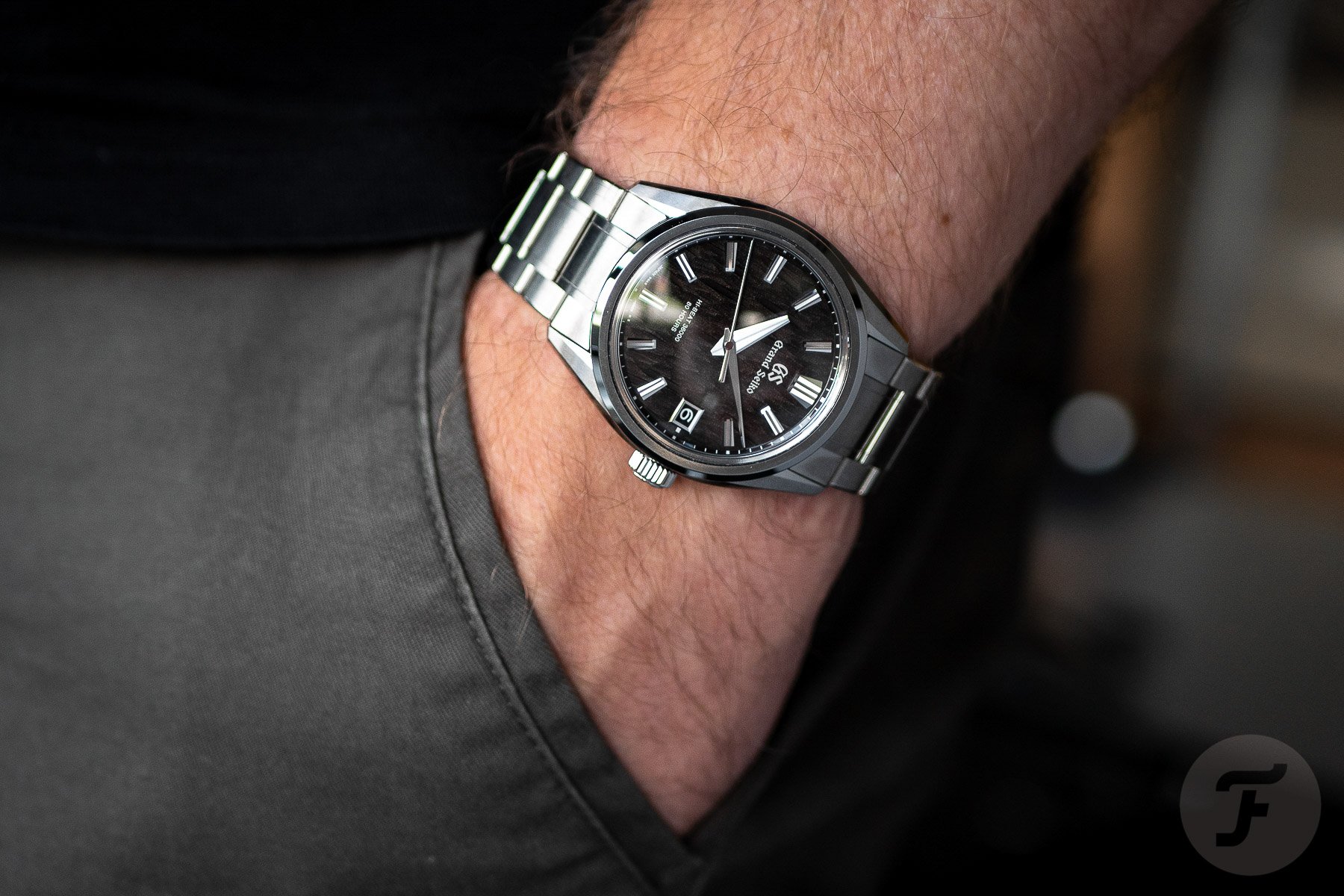 Does it make this SLGH017 “Night Birch” less impressive? Absolutely not. Experiencing the watch up close and wearing it on your wrist will immediately remind you that Grand Seiko creates some of the absolute best and most impressive timepieces around. And this new “Night Birch” is the perfect example of that once again. I can’t wait to take it out for a full review.

For more information, visit the official Grand Seiko website. And let us know your thoughts on the new Grand Seiko “Night Birch” in the comments section.