There’s a cold wind blowing from the East, and it carries the Grand Seiko Chronograph SBGC247 and GMT SBGE275. Both watches are limited editions that have something to celebrate. The GMT celebrates the 20th anniversary of the first Spring Drive GMT watch. The chronograph, the 15th anniversary of the… what again? Exactly. And what did Grand Seiko use as a source of inspiration for the celebratory dials of the watches? That’s right — nature. “Nature again?!” some folks would complain. But is that a bad thing? Let me answer that question in this article. And while I’m at it, I will also address something that is a hot topic amongst Grand Seiko fans and followers here on Fratello — the stream of new Grand Seiko releases. Should the floodgates stay open, or is enough really enough?

In our comments section, we have had many remarks about the large number of novelties — limited and special editions included — that Grand Seiko has been releasing as of late. “Pumping out” watches is a term sometimes used, and it’s a term with a negative connotation indeed. The same goes for the remark that Grand Seiko has become a “dial maker”. It’s a remark that refers to (amongst other new releases) the most recent SLGA009 White Birch II and also the wintery Sōkō Frost SBGH295 and SBGA471 from not so long ago. 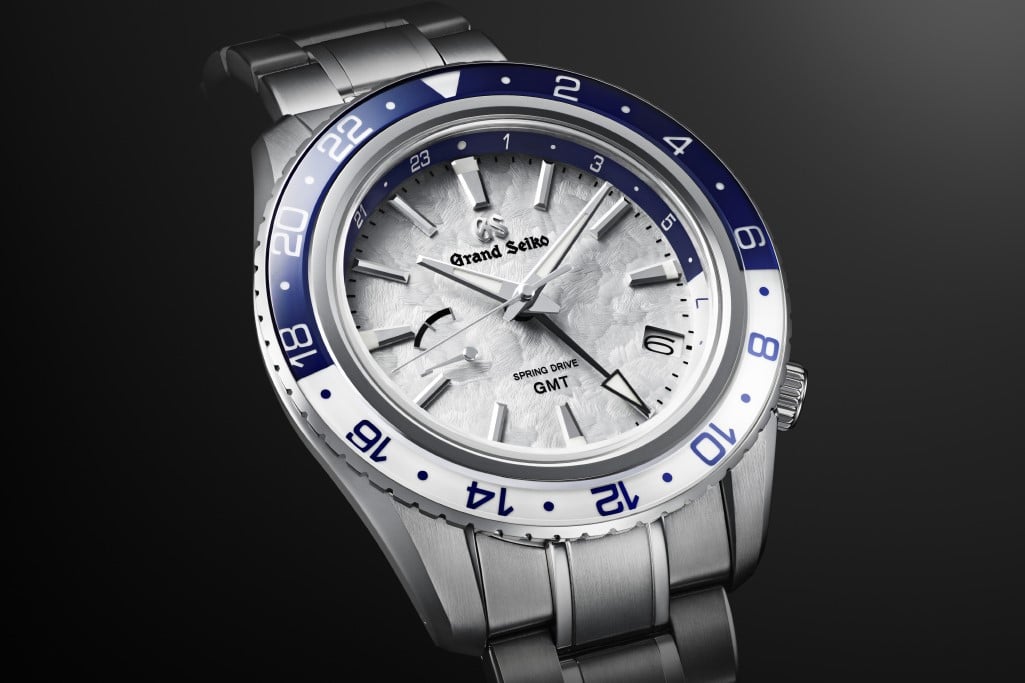 This is how I see it. In the end, it’s not about the quantity Grand Seiko releases, but about the quality. The agony of choice when it concerns luxury watches is a textbook example of a first-world problem. Yes, it’s sometimes hard to keep track, but it sure is more exciting than just releasing five or six new watches every year like the European equivalent of GS does in the best Genevan/Calvinist tradition. If you don’t like the pink-dialed SBGA413 inspired by the pink cherry blossoms that fall on the water and become “hanaikada”, you won’t remember it. And you know what? That’s fine. Another dial, very possibly to your taste, will come along soon.

Nature is the ultimate artist, after all.

And regarding the sources of inspiration — such as the 24 sekki that mark nature’s ever-changing seasons — I’m glad Grand Seiko makes good use of them. Nature is the ultimate artist, after all. And in the end, the watches’ looks count for a lot. 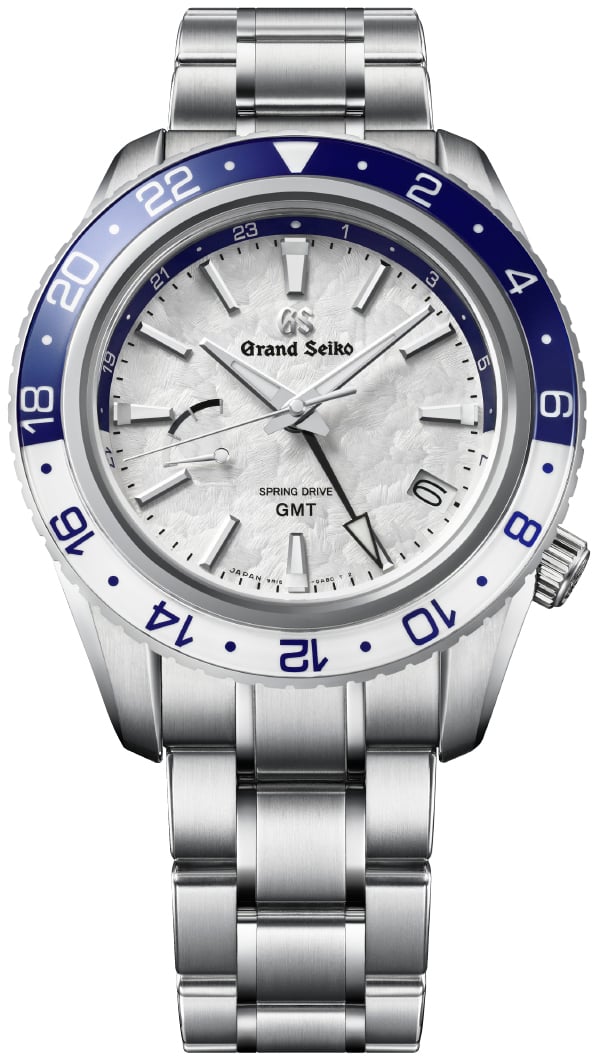 Anyway, the Grand Seiko GMT SBGE275 kicks off this round. The first Grand Seiko GMT watch made a late appearance in 2002, two years before the launch of the first Spring Drive movement. Interestingly, the SBGE275 celebrates this 20th anniversary not with an automatic movement, but with the Spring Drive Caliber 9R16. The caliber already appeared in the SBGE037 and SBGE039 from 2016, as well as the SBGE241 from 2017 — all limited editions.

The 30-jewel movement has a claimed accuracy of ±0.5 second per day and a power reserve of 72 hours. The hour hand is adjustable without compromising the time, thus rendering this watch a “true” GMT instead of a less-complicated “caller” GMT. The practical movement will beat within 1,500 pieces of the SBGE275 travel watch. It will be available as of March 2022 at Grand Seiko boutiques and selected Grand Seiko retailers worldwide. The price will be €7,400. 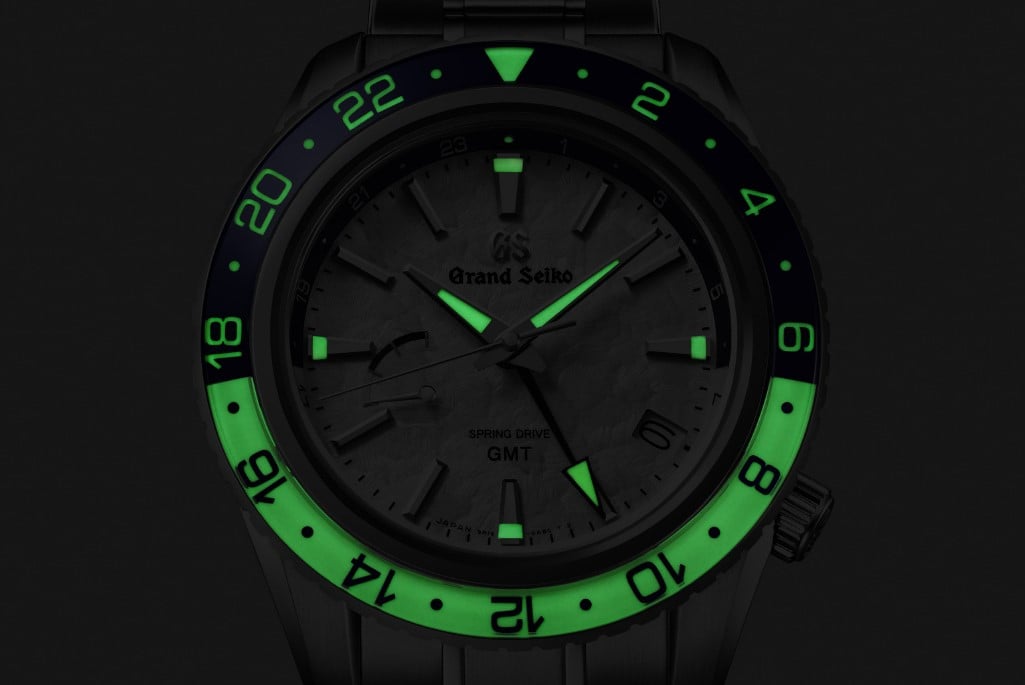 A new athlete in the Sport Collection

The Grand Seiko GMT SBGE275 has a steel case that measures 44 × 14.9mm — that’s an XL size case that asks for an XL wrist. As a part of the Sport Collection, the watch has an edgy, muscular case. It’s equipped with a see-through, screw-down case back and a screw-down crown that ensures 200 meters of water resistance. In case you’re worried about magnetic radiation, the SBGE275 can withstand magnetic fields up to 4,800 A/m. The polished and brushed case is matched to a bracelet that also shows the two types of finishing. The bracelet also has a deployant clasp with a push-button release. A dual-curved sapphire crystal with anti-reflective coating is surrounded by a two-tone ceramic bezel. The in-house Lumibrite on the bezel, indexes, and hands ensures good readability in darker circumstances. 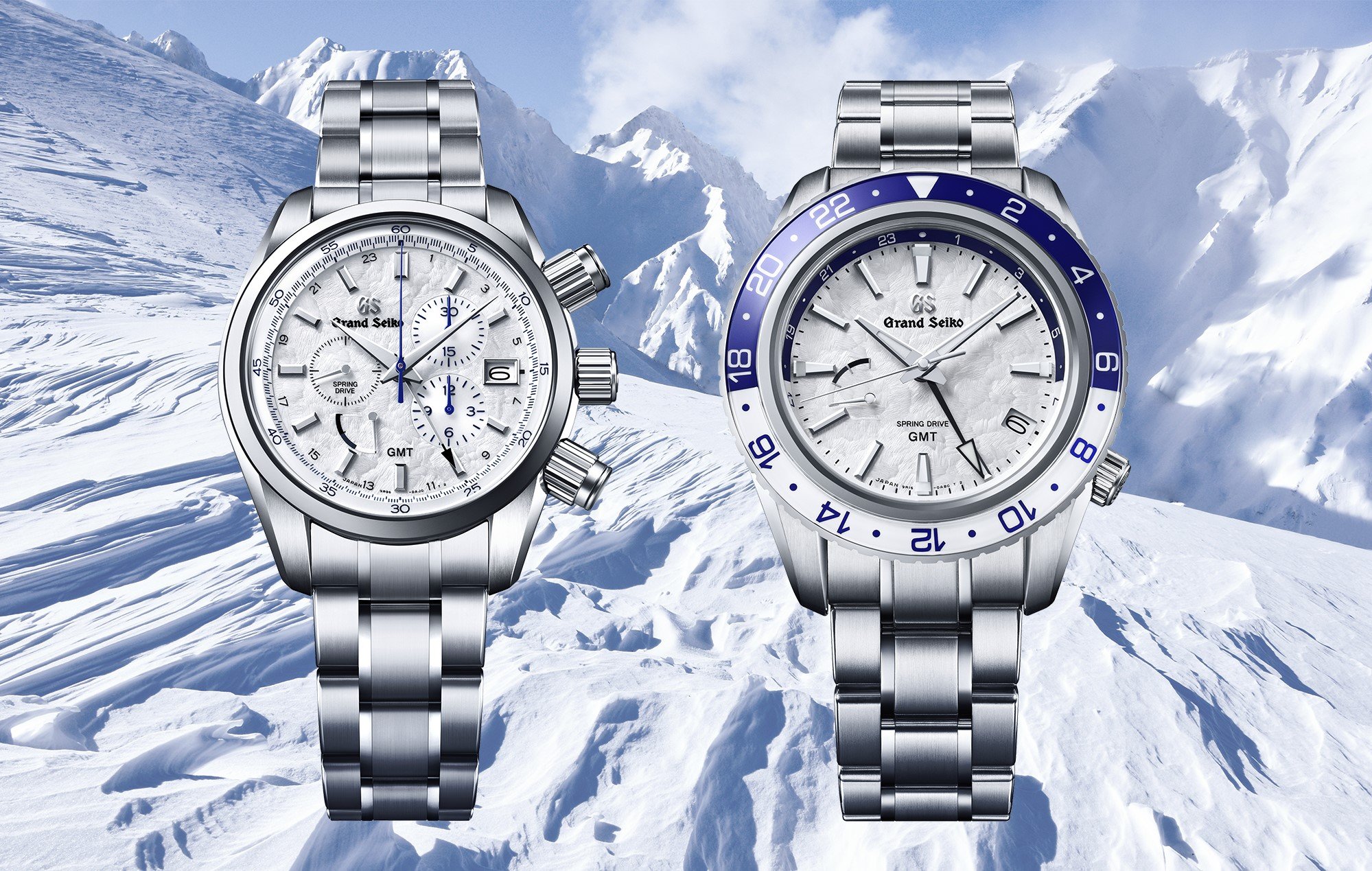 Carved patterns in the snow

The dial of the GMT SBGE275 — and also of the Chronograph SBGC247 that I will tell you about a little later — is inspired by the winter landscape of the mountains that surround the studio where they are made. That’s in Shinshu, in central Japan. It’s a place where the rugged Hotaka mountains can be seen through the windows of the Shinshu Watch Studio. And even if you don’t care where the inspiration comes from, the end result is a stunning dial.

… snow that got its carved pattern from the strong mountain winds that are especially frequent in late winter and early spring.

The famous SBGA211 “Snowflake” also has a dial inspired by the snow-capped Hotaka mountains, but that dial appears to have a smaller, more peaceful pattern. The flaky-dialed SBGE275 and SBGC247 are more dynamic and rough. They resemble snow that got its carved pattern from the strong mountain winds that are especially frequent in late winter and early spring. Either way, you like the dial or you don’t. In the end, it’s that simple. 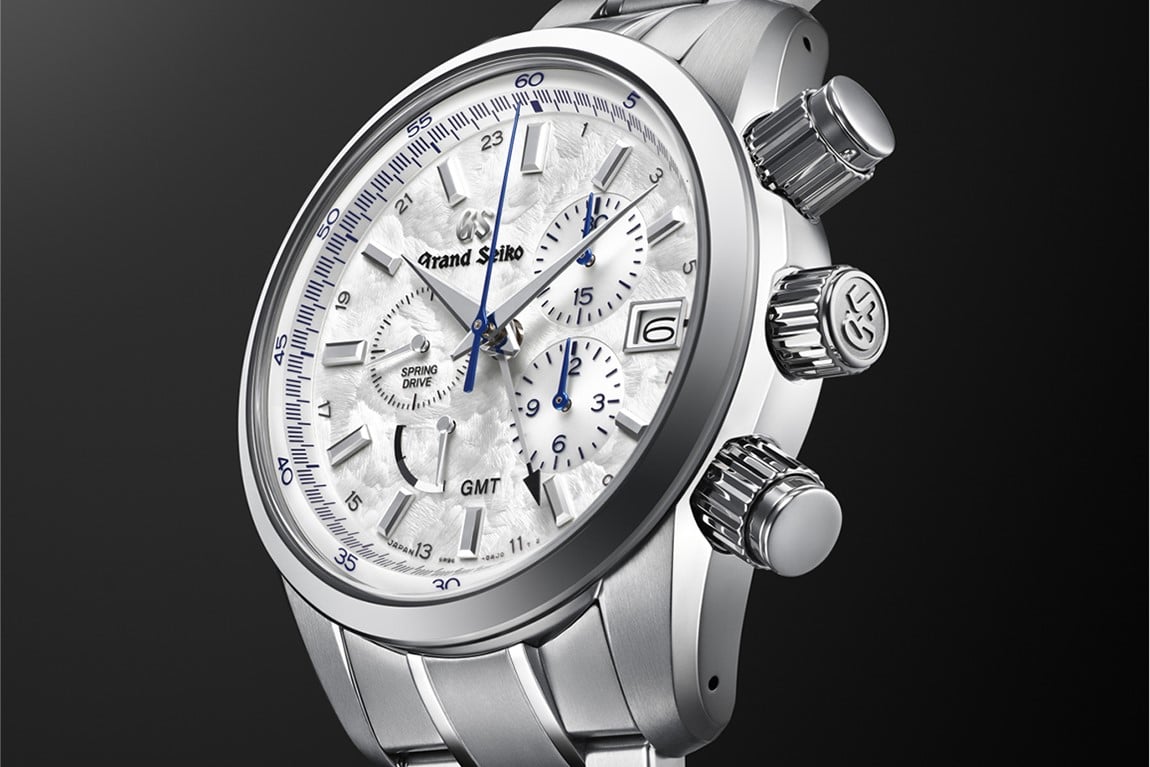 And that sober realization leads me to the GMT Chronograph SBGC247 in high-intensity titanium. Through the secure see-through case back, one can see the 18K gold Grand Seiko lion emblem. The lion graces Grand Seiko’s oscillating weights as an indication of enhanced accuracy. One can also see this spectacle when you look at the case back of the GMT SBGE275. You could describe the SBGC247 as the winter version of the SBGC240 I reviewed a while back. But there are subtle differences. Take the movement, for instance. The SBGC240 uses the Caliber 9R86, but the new SBGC247 is outfitted with the Caliber 9R96. This is a specially adjusted version of the 9R86, which was also used in the 60th Anniversary Limited Edition SBGC238. Whereas the Caliber 9R86 has a claimed accuracy of ±15 seconds a month, the Caliber 9R96 boasts an accuracy of ±10 seconds a month. 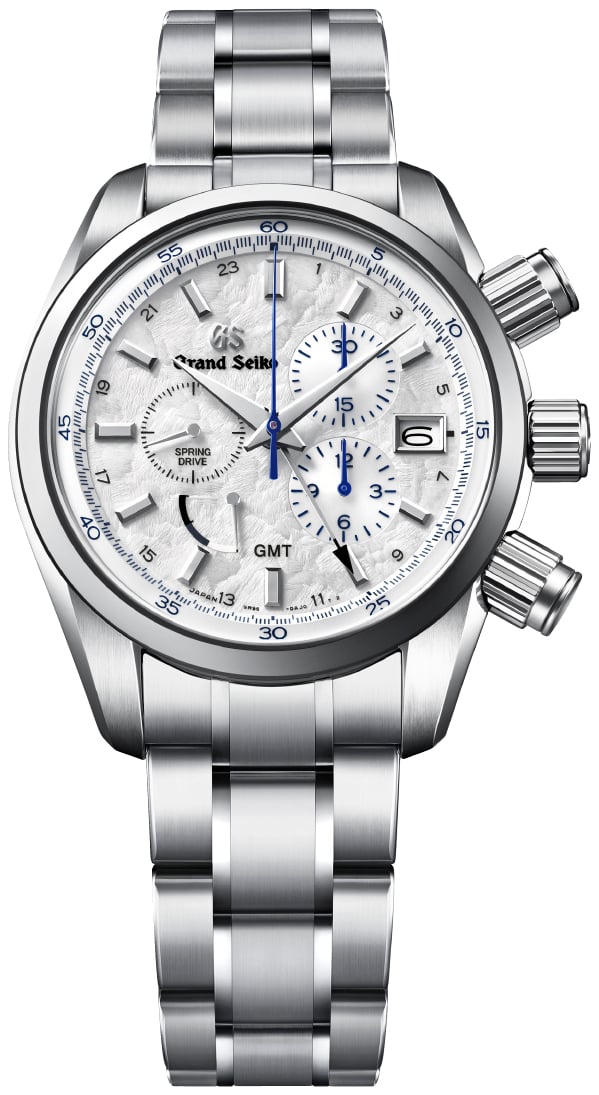 The Grand Seiko Chronograph SBGC247 is a limited edition of 700 pieces. This premium chronograph will be in Grand Seiko boutiques and selected Grand Seiko retailers worldwide starting in February. What you get for €11,100 is a very precise chronograph in a 43.5 × 16.1mm titanium case, which also doubles as a travel watch thanks to the GMT function. The matching titanium bracelet is outfitted with a deployant clasp with a push-button release. The expressive snowy dial is guarded by a dual-curved sapphire crystal with anti-reflective coating. The screw-down crown is accompanied by large screw-down pushers that create a very distinct silhouette. When it comes to the pushers, I guess it’s a love-or-hate thing, and the same goes for the layout of the dial. I like it for its originality and functional nature, but I know of people who strongly disagree. 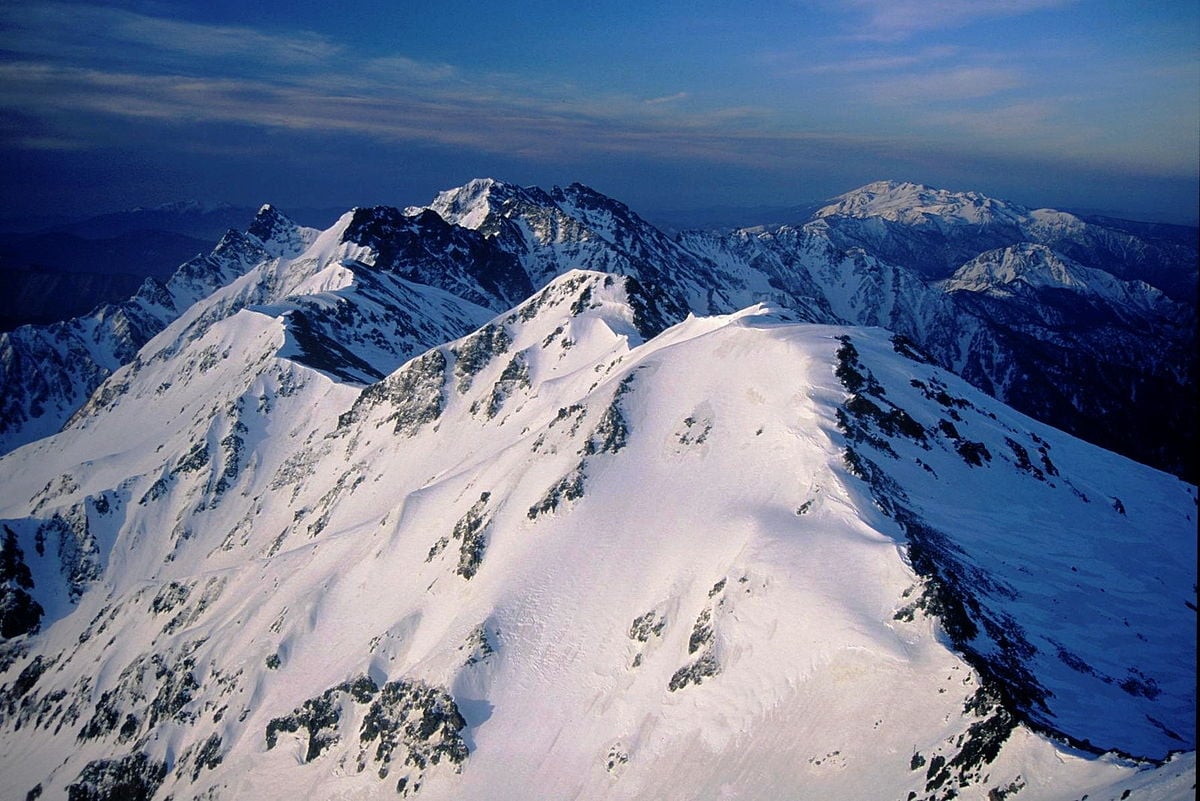 Some final considerations for these two LEs

Let’s circle back to two questions I raised in the intro of this article. Is it a bad thing the dials of both the GMT SBGE275 and Chronograph SBGC247 are inspired by the snow that covers the mountains outside the Grand Seiko manufacture? If you can appreciate a nice sunset, I’m sure you can also appreciate other natural phenomena like fallen snow. As I said earlier, if the dial appeals to you because of its color or pattern, that should be enough.

… since Grand Seiko serves you a buffet of watches, the chances are very high there will be one for your palate.

And regarding the stream of releases by “dial maker” Grand Seiko, I can understand that it’s sometimes hard to keep up, especially with the release of several models at the same time. Different cases with different dials and different movements underneath can sometimes create a bit of a puzzle. But since Grand Seiko serves you a buffet of watches, the chances are very high there will be one for your palate. You should ask yourself this: do you prefer being starved for choice? Or do you favor the impossibility of making a choice because there’s almost too much to choose from? I know what I prefer.