The Hamilton Ventura’s connection to Elvis is one of those famous-owner stories that never gets old. Ever since the King made it “his watch” in 1961, the avant-garde timepiece has been immortalized. Through the decades, the Ventura has spawned countless sizes, colors, executions, and movements. The latest iteration takes inspiration from a neon city at night as the energy and vibrancy come alive. The Ventura XXL Bright features a dial that illuminates with red detailing and comes in a super-large size for the big-wristed or big-spirited among us. 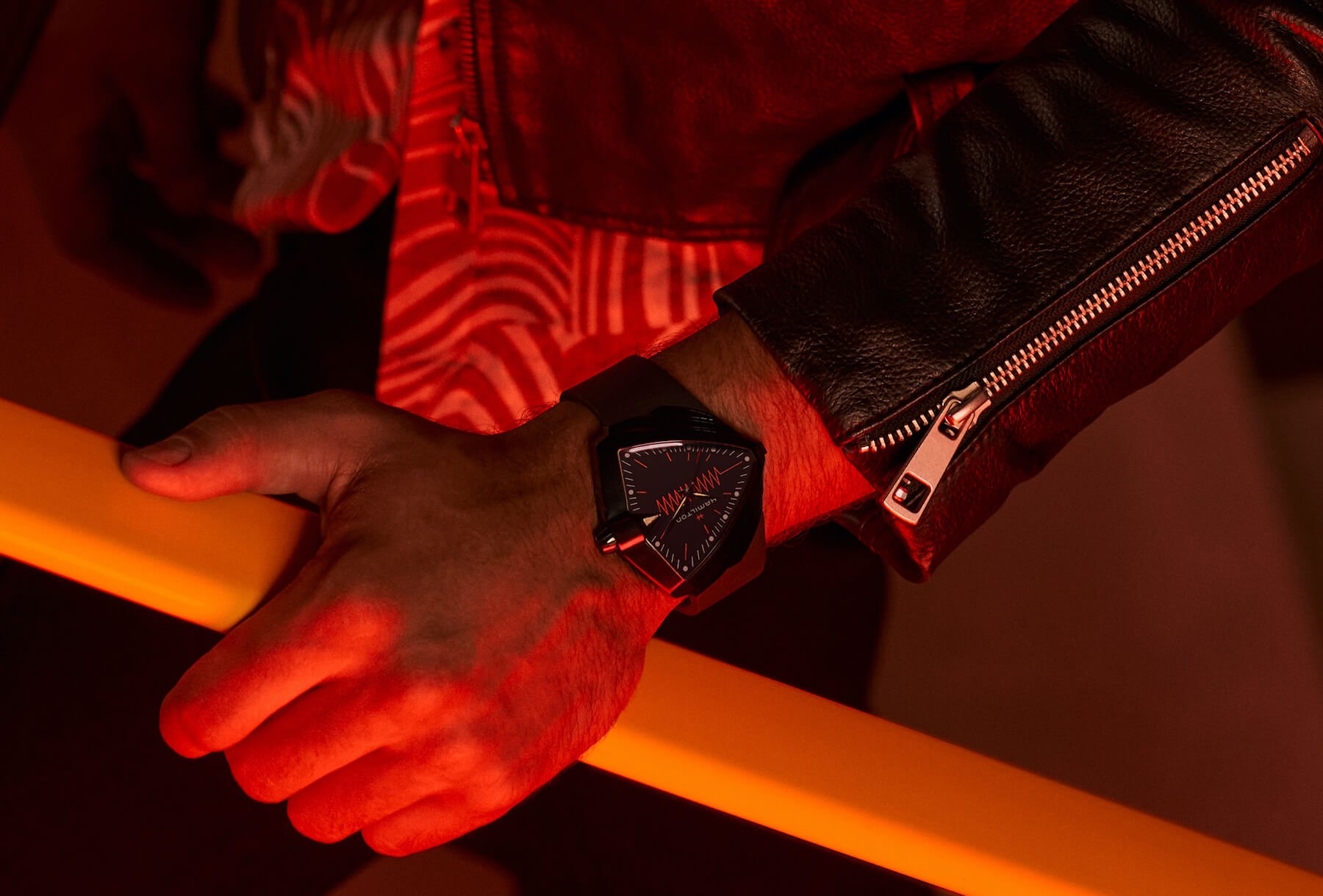 From bygone times to avant-garde

Hamilton started life producing pocket watches as the “Railroad Timekeeper of America” (which we just covered here) at the turn of the 20th century. When you consider the brand’s origin, it’s almost mind-boggling to put the Ventura in the same sentence. The Ventura was the world’s first battery-powered watch, and as such, it was a technical ground-breaker. What makes it even more fascinating is that it was launched in a quirky triangular case and an inventive electric-powered movement in 1957, over a decade before quartz innovation took hold. 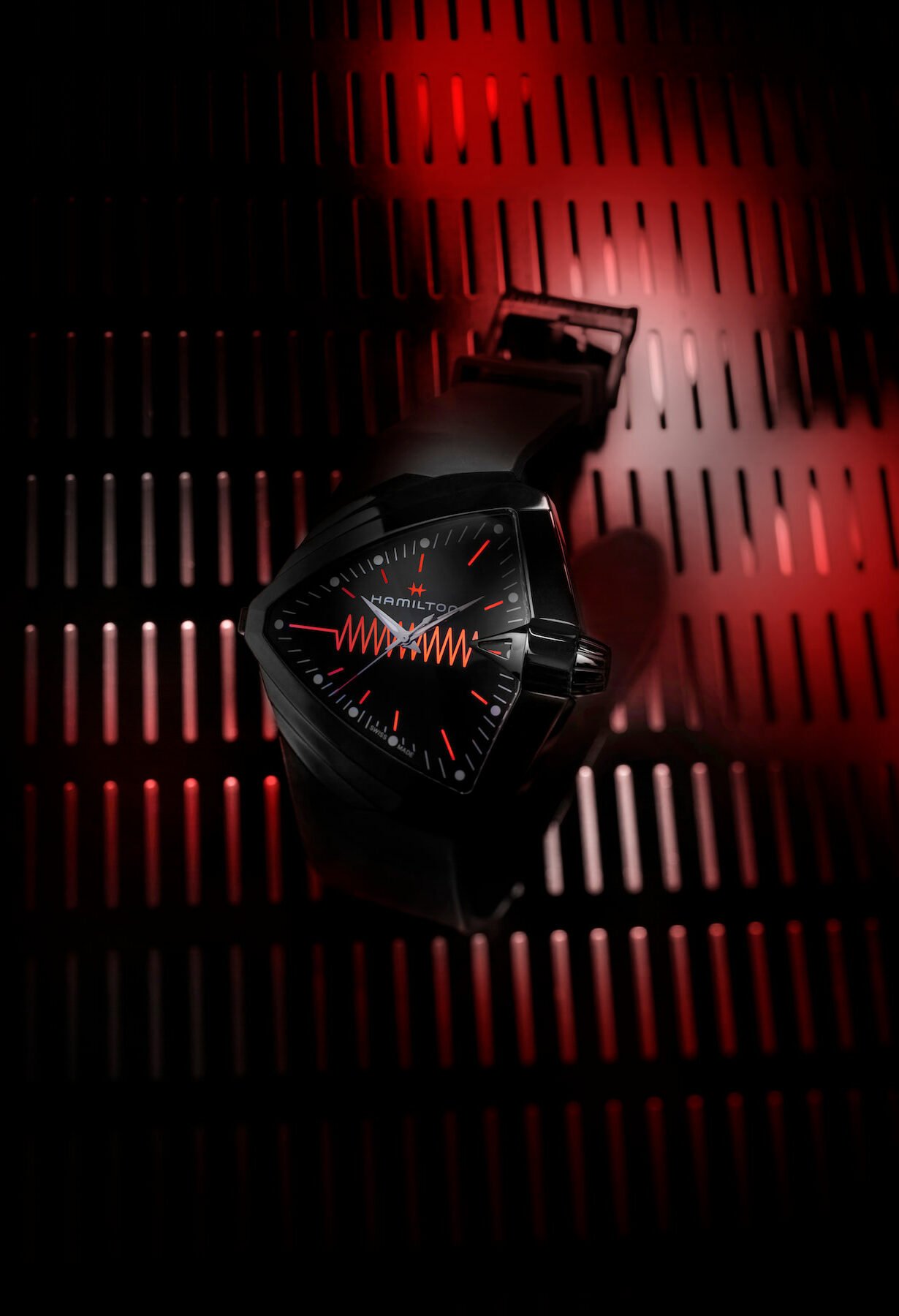 The weird and wonderful

Created by American industrial designer Richard Arbib, the Ventura was clearly not just ahead of its time but also an awe-inspiring representation of 1950s design. Arbib himself had a futuristic edge and a thing for what he called “V-line styling”, which he applied to automobiles at that time. Somehow, that translated into an arrow case shape in a wristwatch for the Ventura. Even to this day, triangular cases are few and far between, and for good reason. 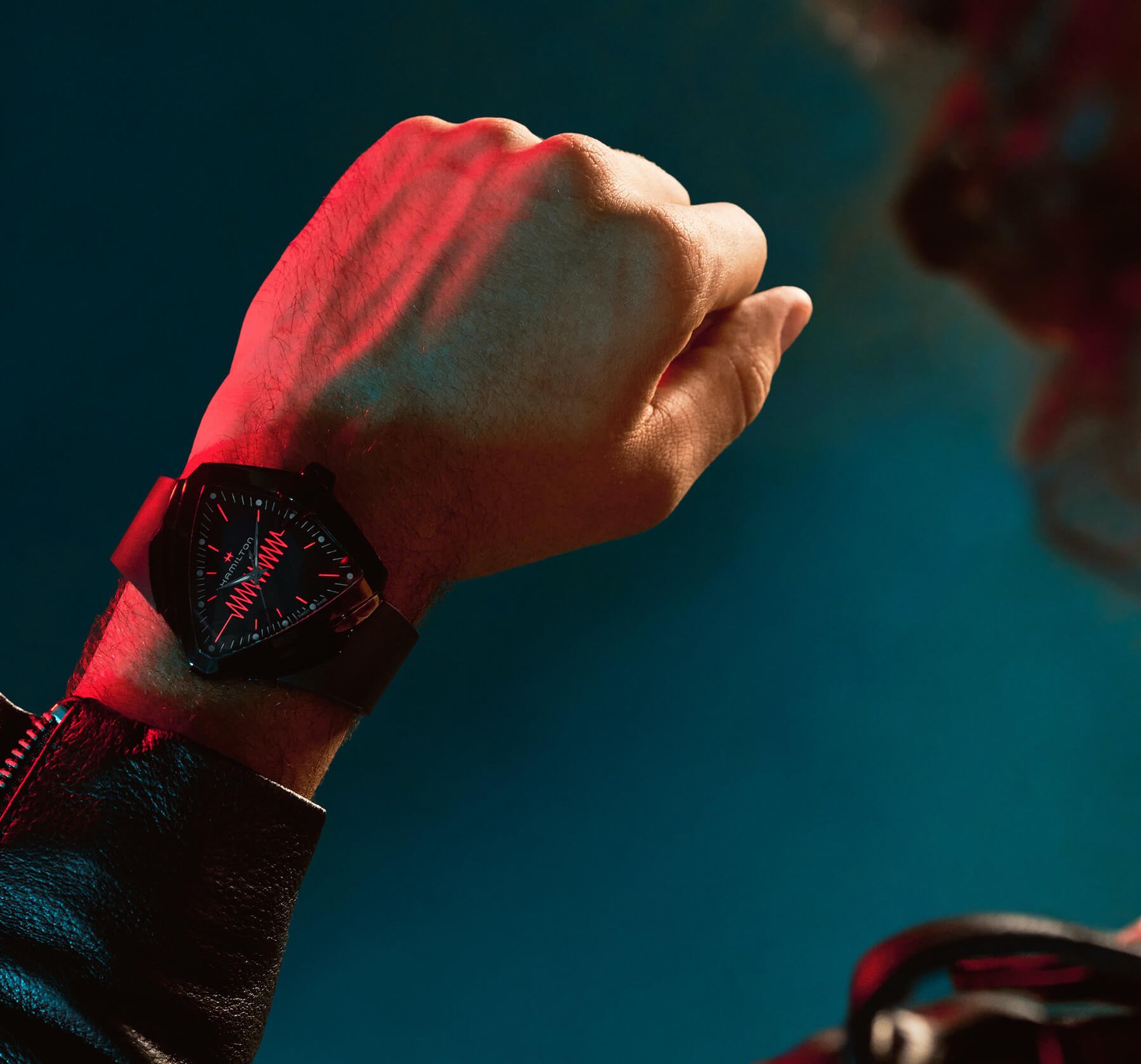 An icon through the times

In fact, the original run of the Hamilton Ventura was short-lived, despite its iconic status. It was out of production after just seven years. However, Hamilton revived the Ventura in 1988 and has kept it in the core collection ever since. The iconic watch has proven to stand the test of time from both creative and manufacturing perspectives while it continues to evolve. More than that, it has remained relevant even as our wrists have grown in size. Bucking the trend of smaller watches, Hamilton brings out the Ventura XXL Bright to celebrate the bright and the bold in all its glory.

The new Ventura XXL Bright is even larger than the XXL Automatic we reviewed here earlier this year. The polished stainless steel case with a black PVD coating is 52mm × 47.6mm in size. Its geometric terraced shell features rounded edges for a softer feel. The case measures 11.8mm thick, has a lug width of 23.5mm, and provides 50 meters of water resistance. 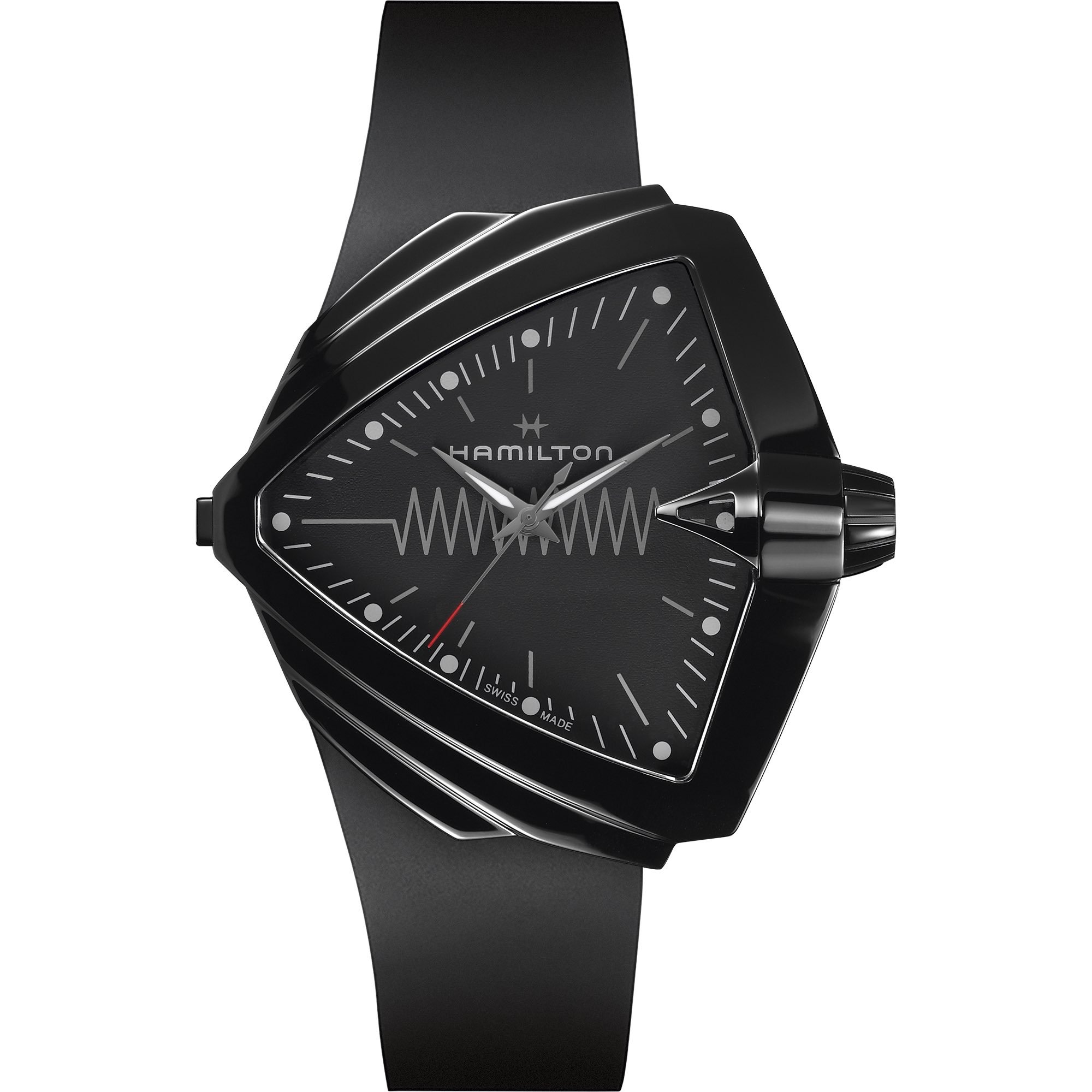 The XXL Bright is more triangular than the original Ventura but feels familiar in theme. The black dial features a similar electric-pulse motif and matching indexes for a fresh take on the 1950s model. The same motif was also seen in the Ventura Elvis80 that Jorg reviewed here. Along with the H logo, the gray detailing glows in red with a push of the button at 9 o’clock. Powered by a modern-day custom quartz movement, it nods to urban neon signage as it illuminates a buzzing night scene.

Against a black backdrop, the black hour and minute hands coated with Super-LumiNova light up as darkness sets in. The seconds hand has a red tip that sweeps around the arrow-shaped dial, just like the ’50s original. Protecting it all is a sapphire crystal with a double anti-reflective coating, and fitted into the terraced lugs is a black rubber strap. 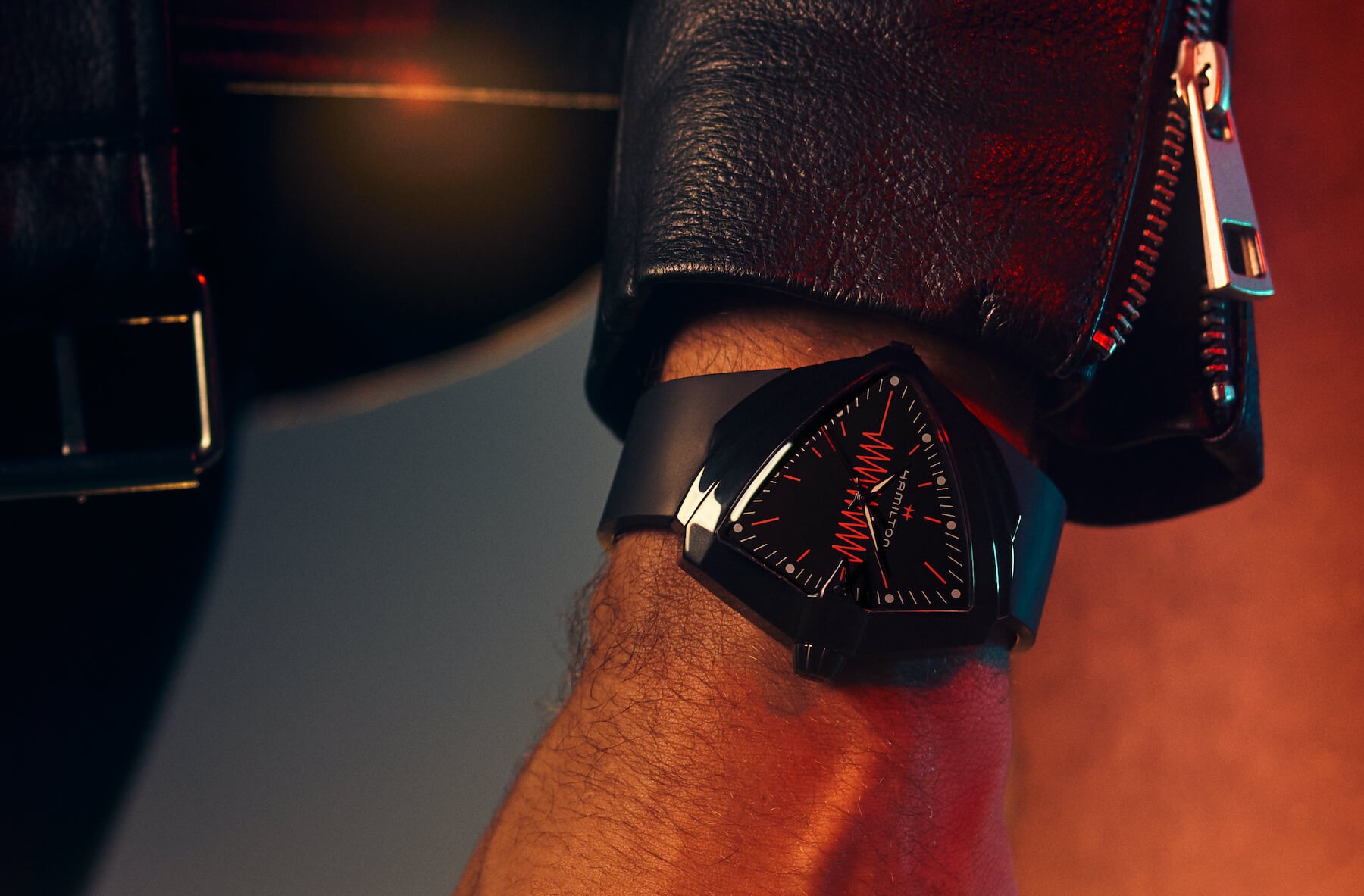 The Ventura XXL Bright is unapologetically big and bold for those with extraordinary wrists. It comes at a time when Hamilton celebrates its 130th anniversary with a pocket watch. I cannot say there are many watch companies that can pull a move like that and still make complete sense. Hamilton does, though, and the brand is certainly not leaving the large-watch lovers out of the party with the Ventura XXL Bright. This new model retails for €1,525 including VAT in Europe or $1,495 in the US.