The Hamilton Ventura is one of those watches that pretty much every watch enthusiast knows. The Ventura takes all the classic conventions of what a watch should look like and throws them straight out of the window. The most famous wearer of the Ventura was without a doubt, Elvis Presley. Back in 2015, Hamilton launched the Ventura Elvis80 collection on what was to be Elvis’s 80th birth year. Almost six years after that, the latest additions to the collection are the Hamilton Ventura Elvis80 Skeleton watches. Are these two watches still the classic that Elvis wore? Let’s find out!

It’s remarkable how I managed not to review or even wear a Hamilton Ventura before. As someone that is predominantly drawn to the design of watches first, the Ventura is one of those iconic watches that stands out because of its design.  But I somehow managed to never experience one from up close. But I’m getting my fair share now with two new skeletonized versions of the Ventura. 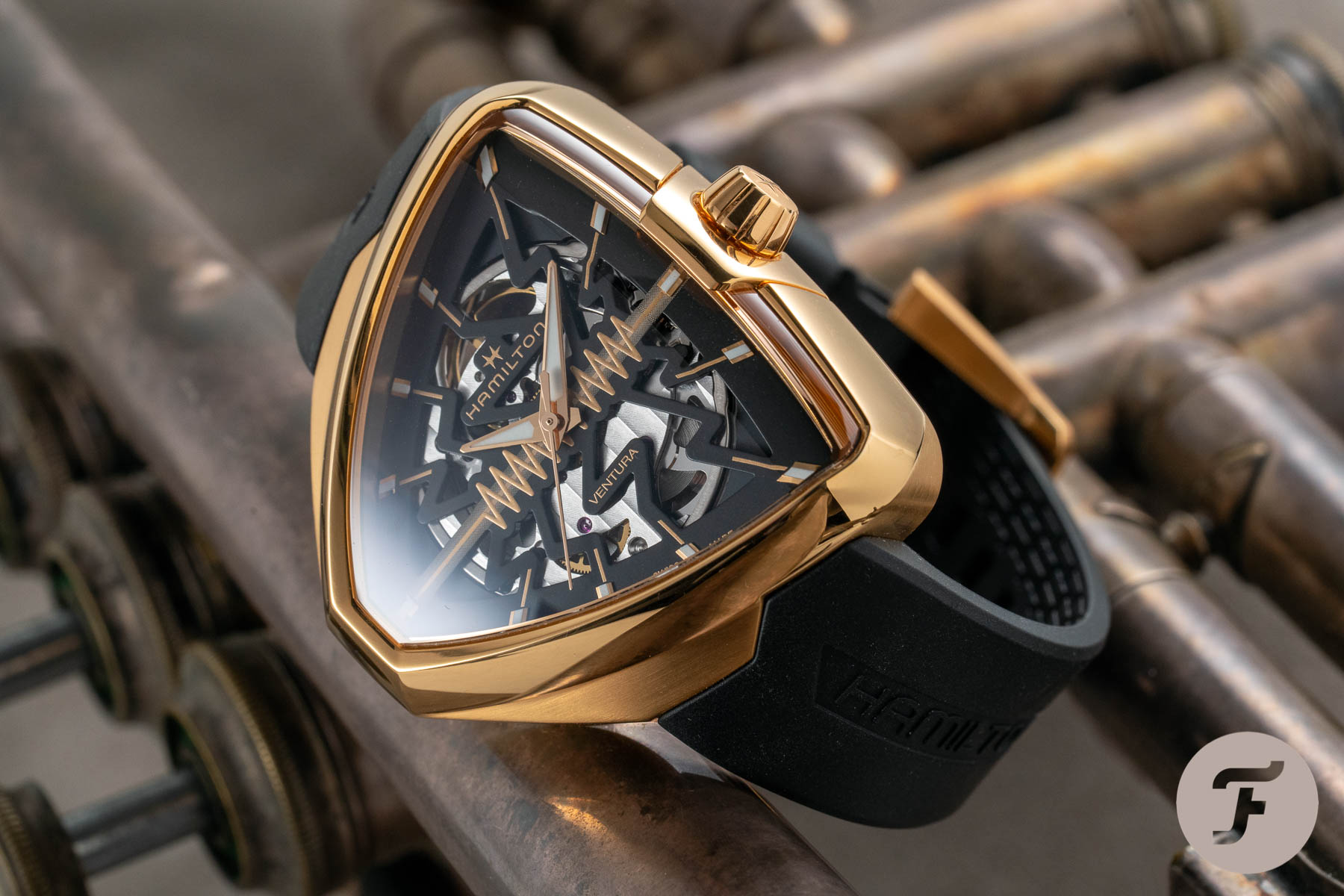 The statement the Ventura makes has always been a staple of 1950s American design. The Ventura was introduced in 1957 and perfectly represents American design from that era. In an era where the Swiss watch brands introduced some of the most iconic watches ever released, Hamilton took a different route. Designer Richard Arbib created a statement that was all about being different. The designer made a name for himself at General Motors and the work he did for GM is reflected in the Ventura.

On top of that the Ventura was the first mechanical watch to be fueled by a battery. Hamilton invested ten years of research into the development of the H500 movement that would take away the ‘nuisance’ of having to wind your mechanical watch. Hamilton developed a battery specifically for the Ventura with the help of the National Carbon Company. It was the final missing piece of the puzzle and on 3 January 1957, the Hamilton Ventura was presented in the Savoy Plaza hotel in New York. A total of 120 journalists from all over the world witnessed the presentation of the next step in watchmaking. 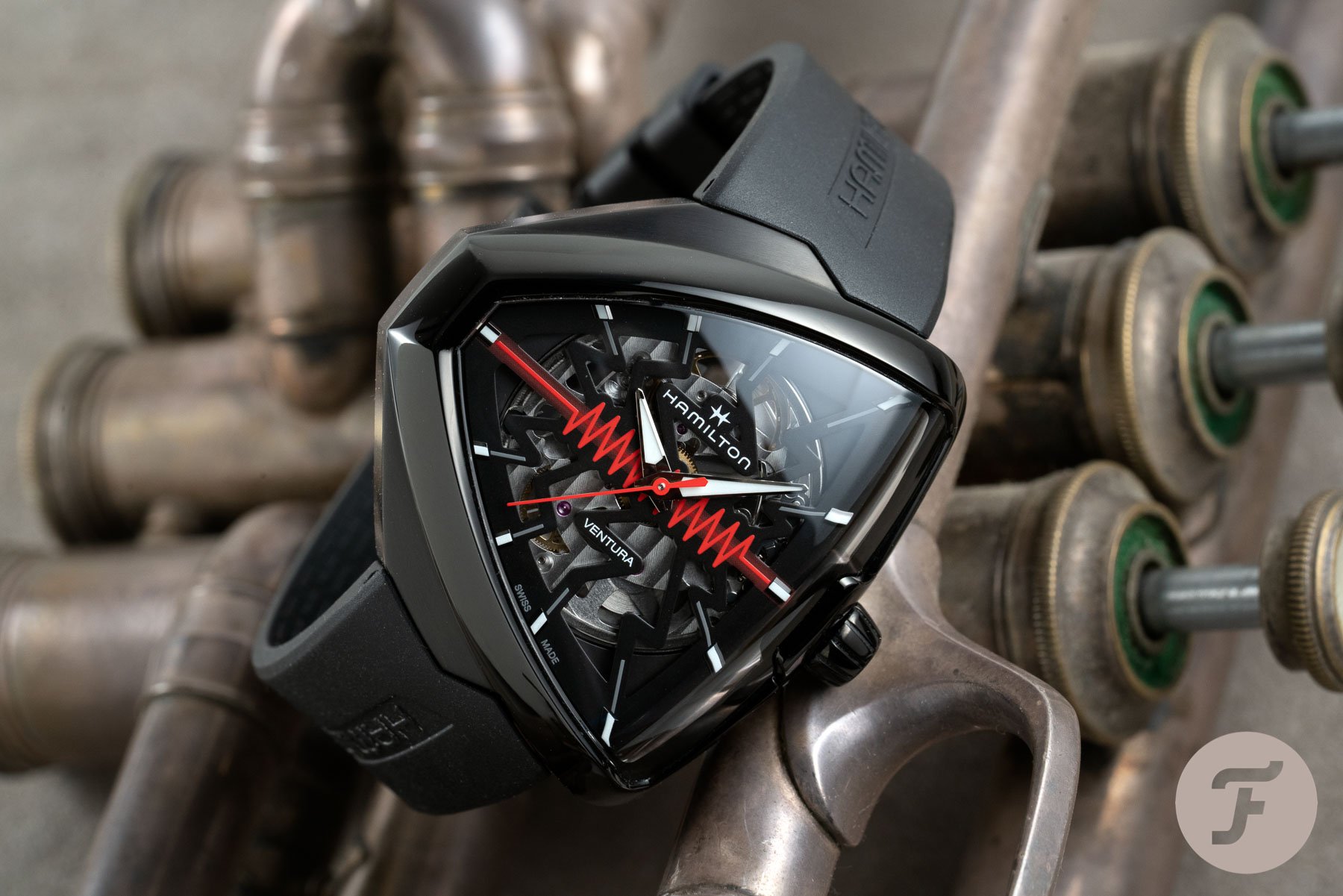 In the first years after the Ventura was introduced, it turned out to be a commercial success for Hamilton. But the watch really hit the spotlights when Elvis Presley wore his white gold Ventura in 1961 in the hit movie Blue Hawaii. The King really loved the Ventura. Not only did he own several Venturas, but he also gifted them to friends. Six decades later the legacy of the Ventura and Elvis is still one of the industry’s most famous stories. It made the Ventura into a cult classic that found renewed popularity multiple times over the decades. One of these moments is that the Ventura is the watch worn in the Men In Black movies. 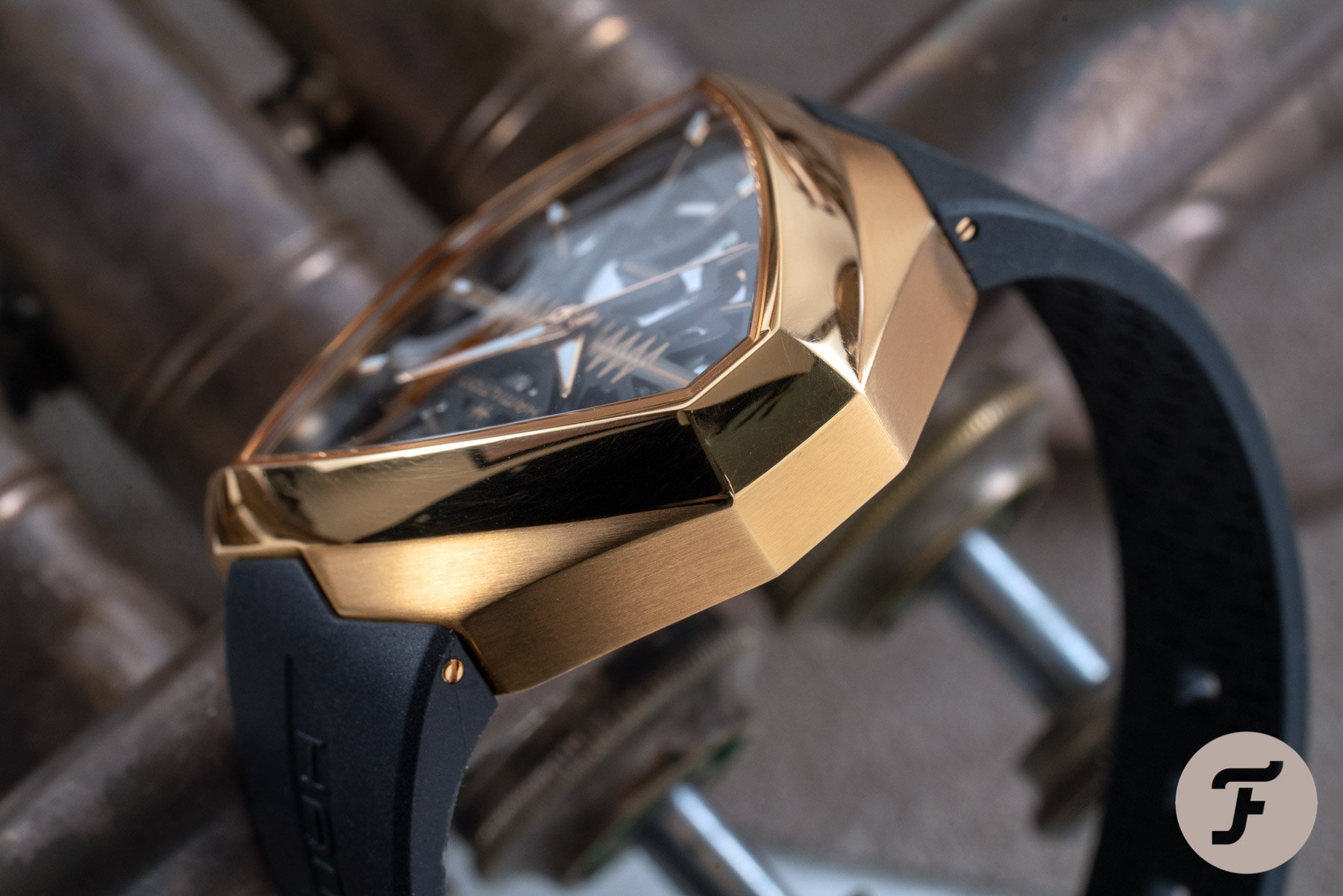 But Hamilton decided to honor the Ventura’s most famous wearer with the introduction of the Ventura Elvis80 collection in 2015. The collection was introduced in the year The King would have turned 80 years old. Hamilton completely redesigned the case of the Ventura for this new collection. The goal was to make sure its dimensions combined with its ergonomic case shape guarantee great comfort on the wrist. These latest additions to the collection are a pair of skeletonized Ventura models. They take the Ventura into the future rather than making it a staple of the past. 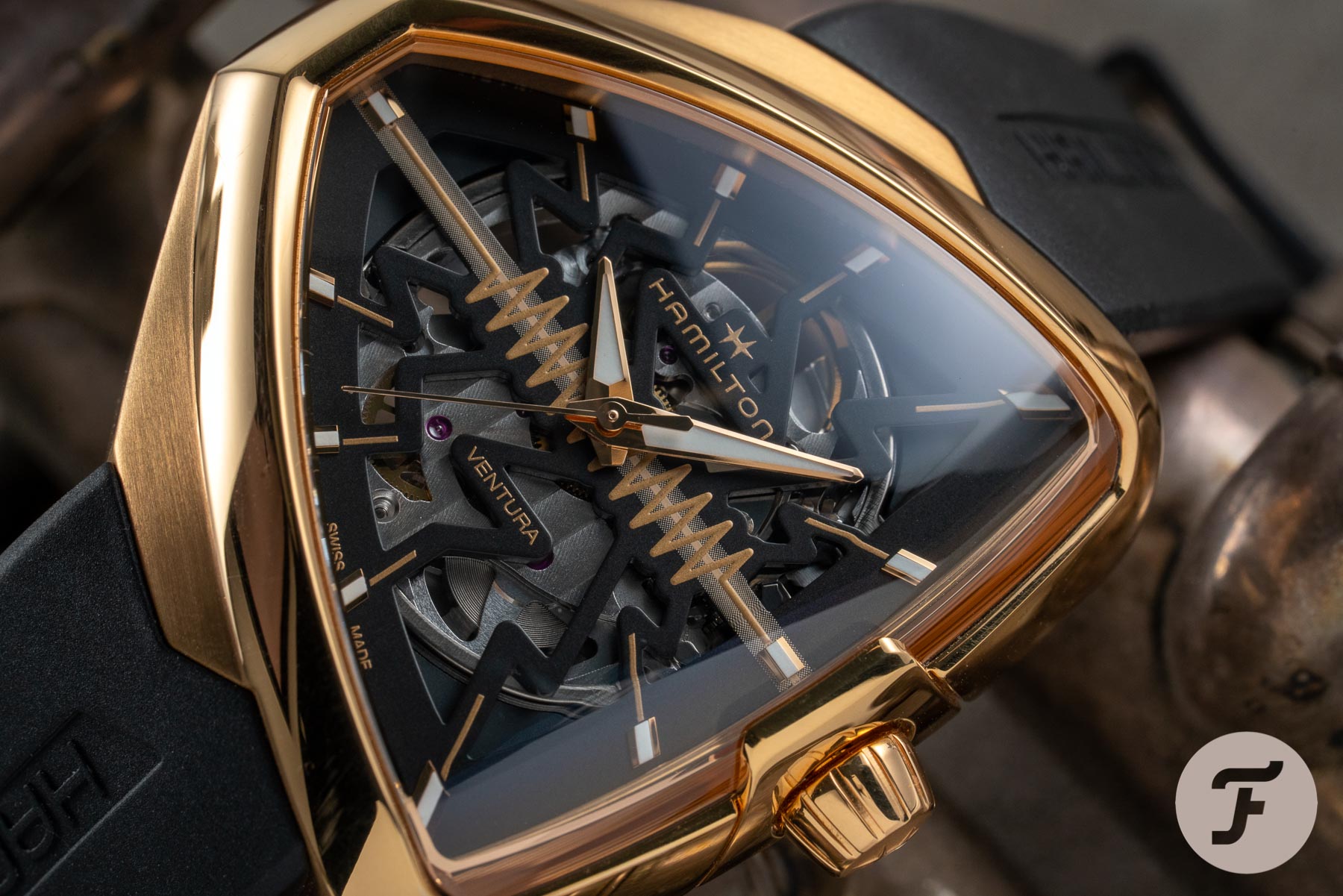 The new Skeleton models come in two variations. The first is a stainless steel version with a black PVD coating. The watch has a black open-worked dial that is lit up by a red electric pulse and comes on a black rubber strap. The second version features a stainless steel case with a rose gold PVD coating. This piece also has a black open-worked dial and comes with a rose gold electric pulse. And just like the black version, it also comes on a black rubber strap. The pulse is a nice hint to the origins of the Ventura that perfectly fits the modern aesthetics.

Both watches feature a 42,5mm x 44,6mm case that is water-resistant up to 50 meters. The dimensions might sound quite large at first. But due to the Ventura’s different shape, it cannot be compared to a conventional watch case with those dimensions. If anything, I feel the Ventura needs this size to be able to pull in a crowd that is looking for a modern and different looking watch. Especially considering its technical looks. 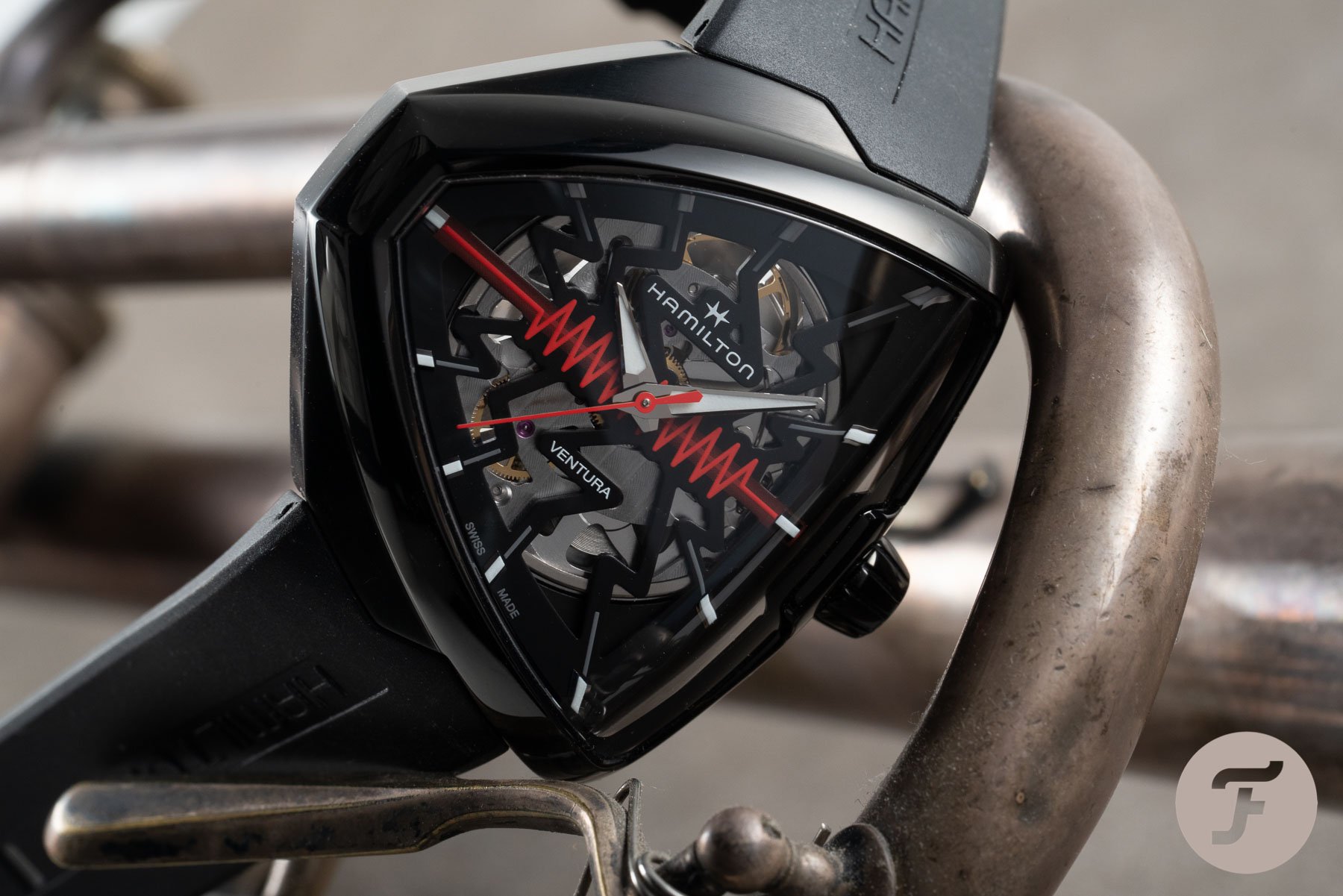 As you can see in the pictures there is quite a difference in presence when you see the watches together. What they definitely have in common though is their futuristic presence. The watches look more at home in a sci-fi movie than in Blue Hawaii. It is proof that the Ventura is definitely not a one-trick pony when it comes to its design. And I definitely feel that this could be a direction for the Ventura that will attract a new and younger crowd.

If we zoom in a little more, you will see there are more differences between the two models than just their black vs. rose gold PVD coating. Both models feature the same open-worked dial construction with four black lightning bolt-like shapes that connect the upper hour markers and the lower hour markers. The mentioned electric pulse shape connects the 3 o’clock and 9 o’clock markers horizontally. It’s a clever construction that also places the Hamilton logo and the Ventura logo strategically on the construction of the dial. 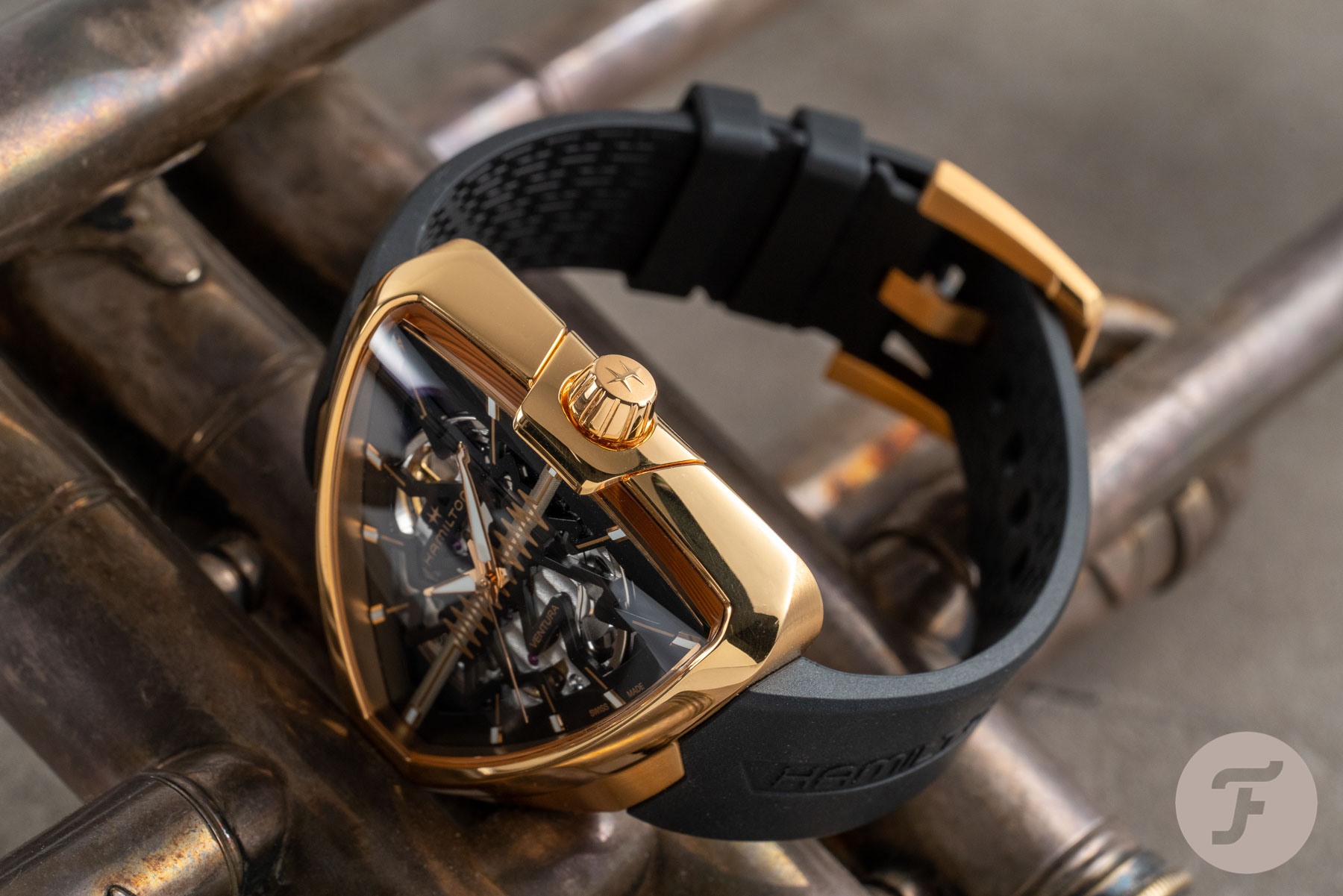 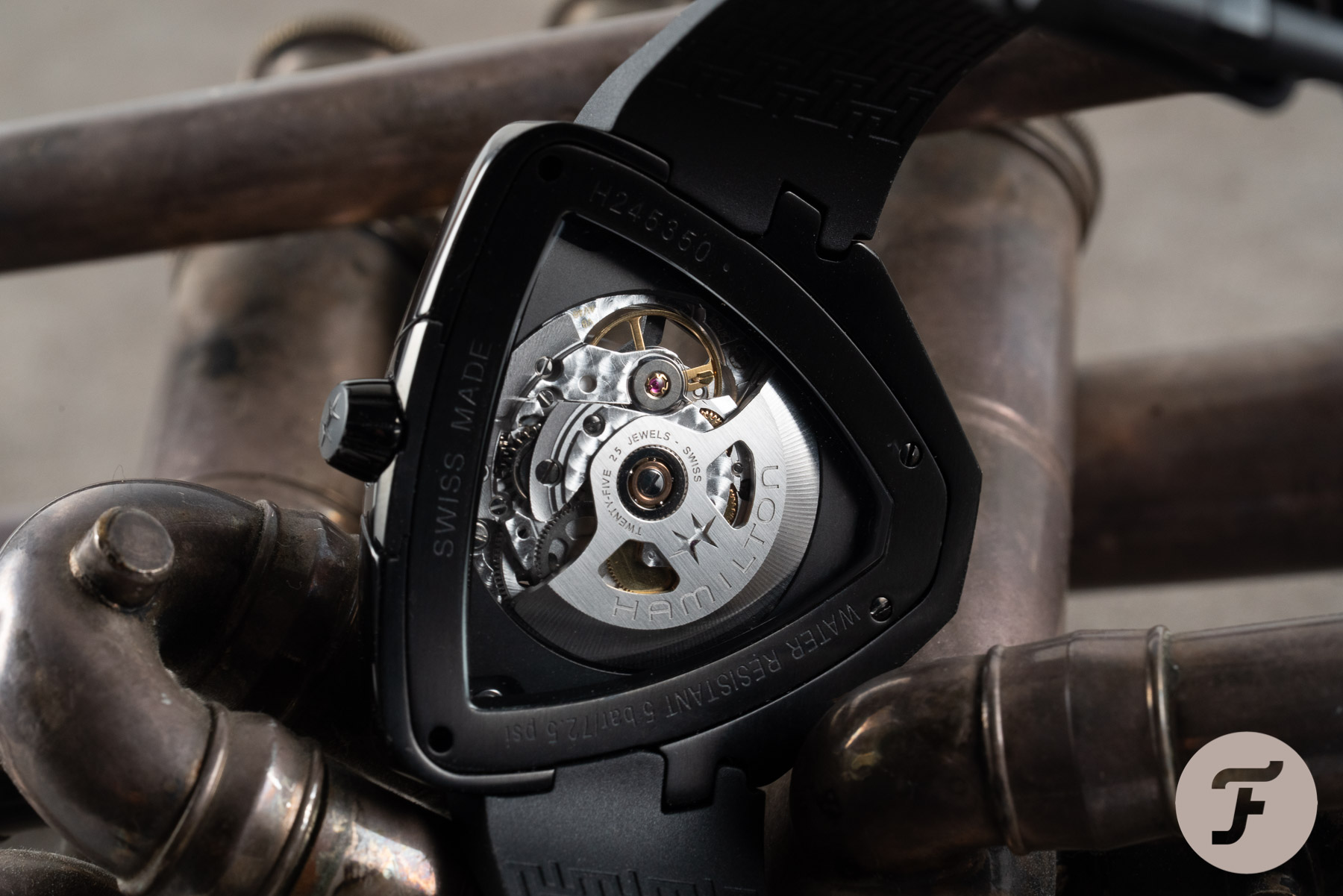 Through the open-worked dial, you can see the automatic Hamilton caliber H-10-S in action. Hamilton made sure that the movement has a nice Côtes de Genève decoration finish for the necessary visual impact. The movement is also used for a string of other Hamilton watches including other Ventura models. The movement is based on the ETA C07.111. It has 25 jewels, operates at 21,600vph, and features an impressive 80-hour power reserve. 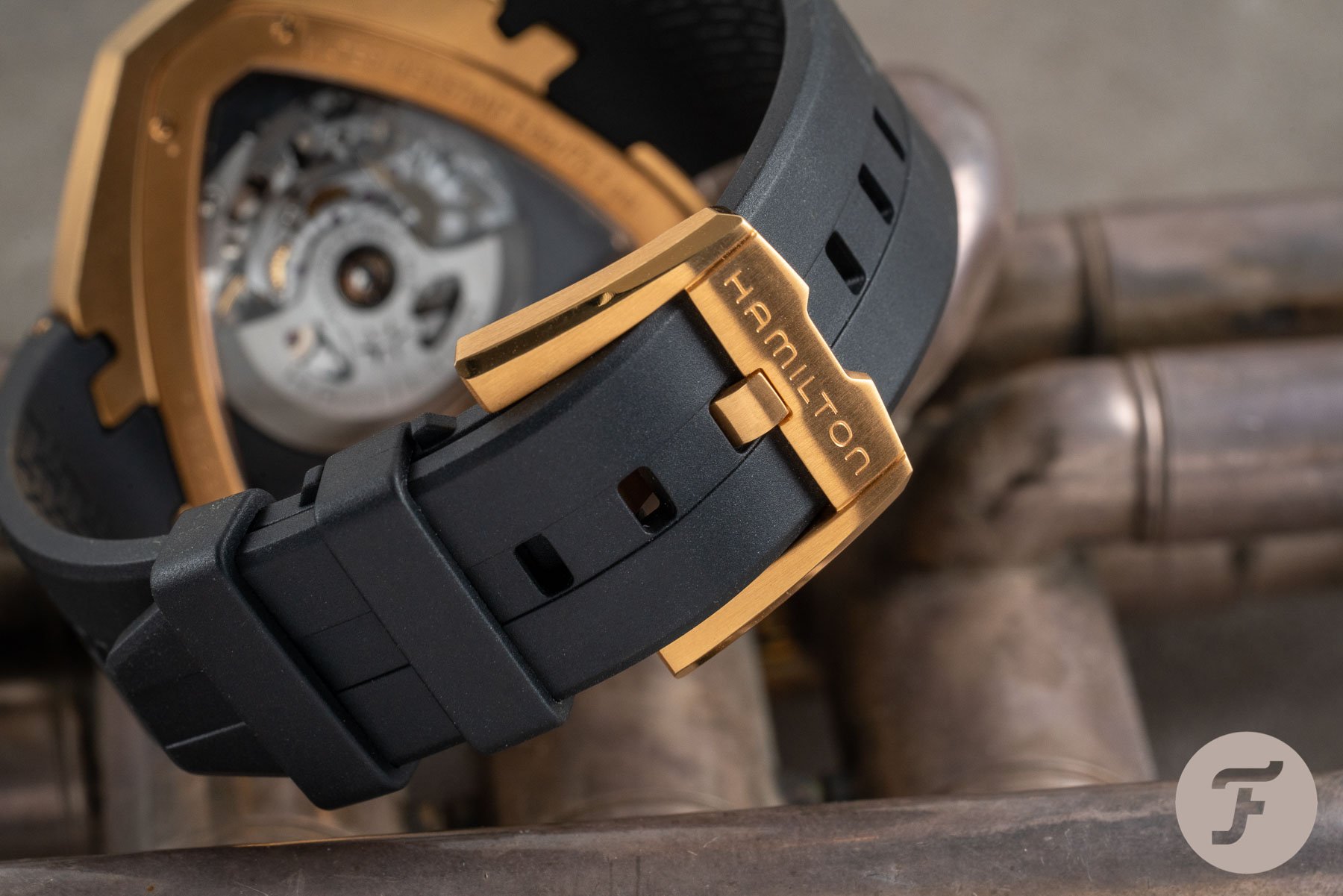 Both watches feature a display case back, making sure you can check out the movement in action. It’s fun to see the contrast of the triangular case and the round movement. It creates a fun view and makes you realize once more this is not your ordinary shaped watch. The backside of the H-10-s movement is decorated with perlage and has a customized, open-worked rotor. 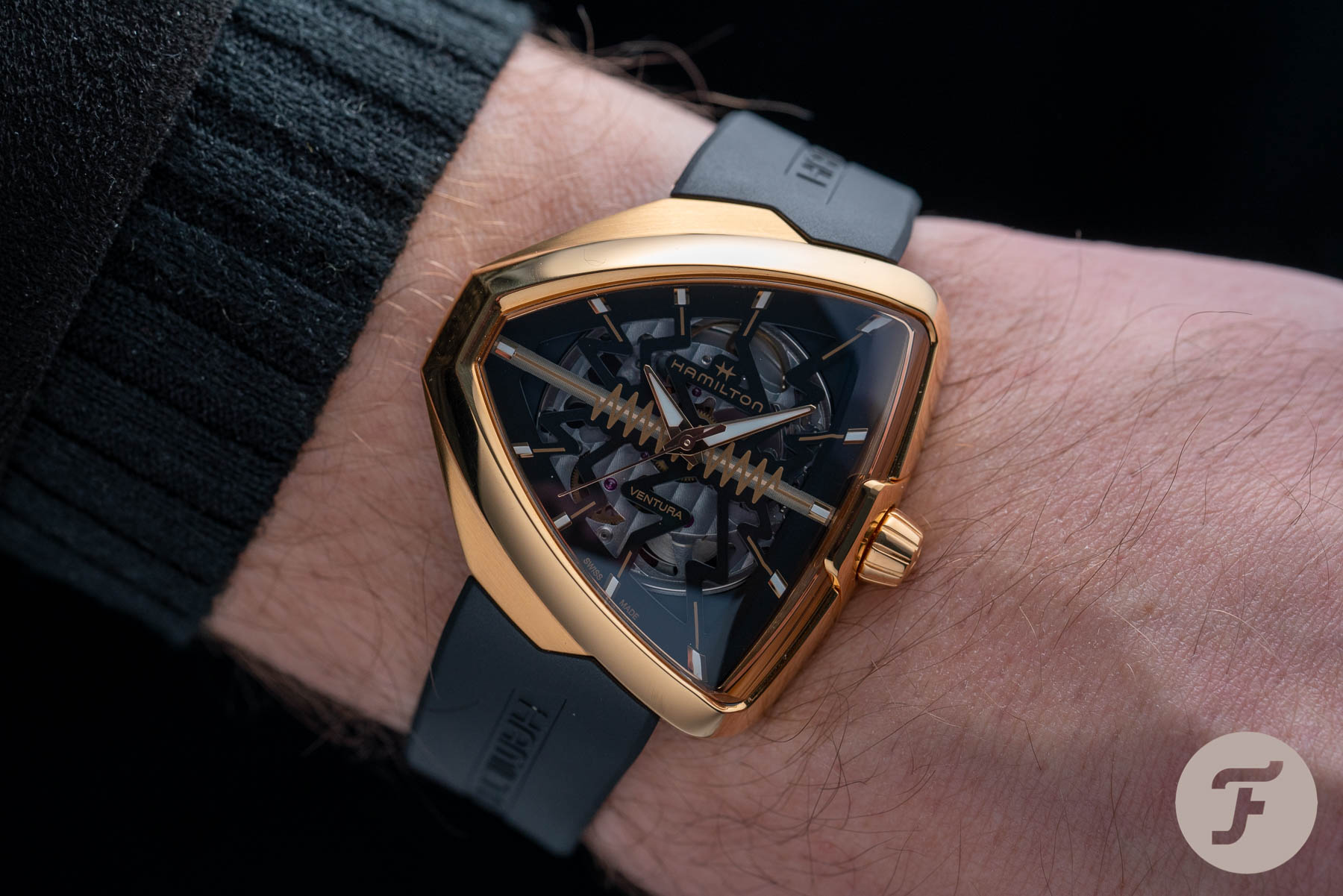 So with the facts and figures out of the way, it’s time to experience the skeletonized Ventura models on the wrist. The first thing that stands out is how comfortably the Ventura sits on your wrist. The case has a curved silhouette that truly hugs the wrist. And once you have it on your wrist, there is no denying the remarkable shape. A Ventura wears completely different than your normal shaped watch. I was impressed by how easy it is to wear despite its possibly daunting size dimensions. 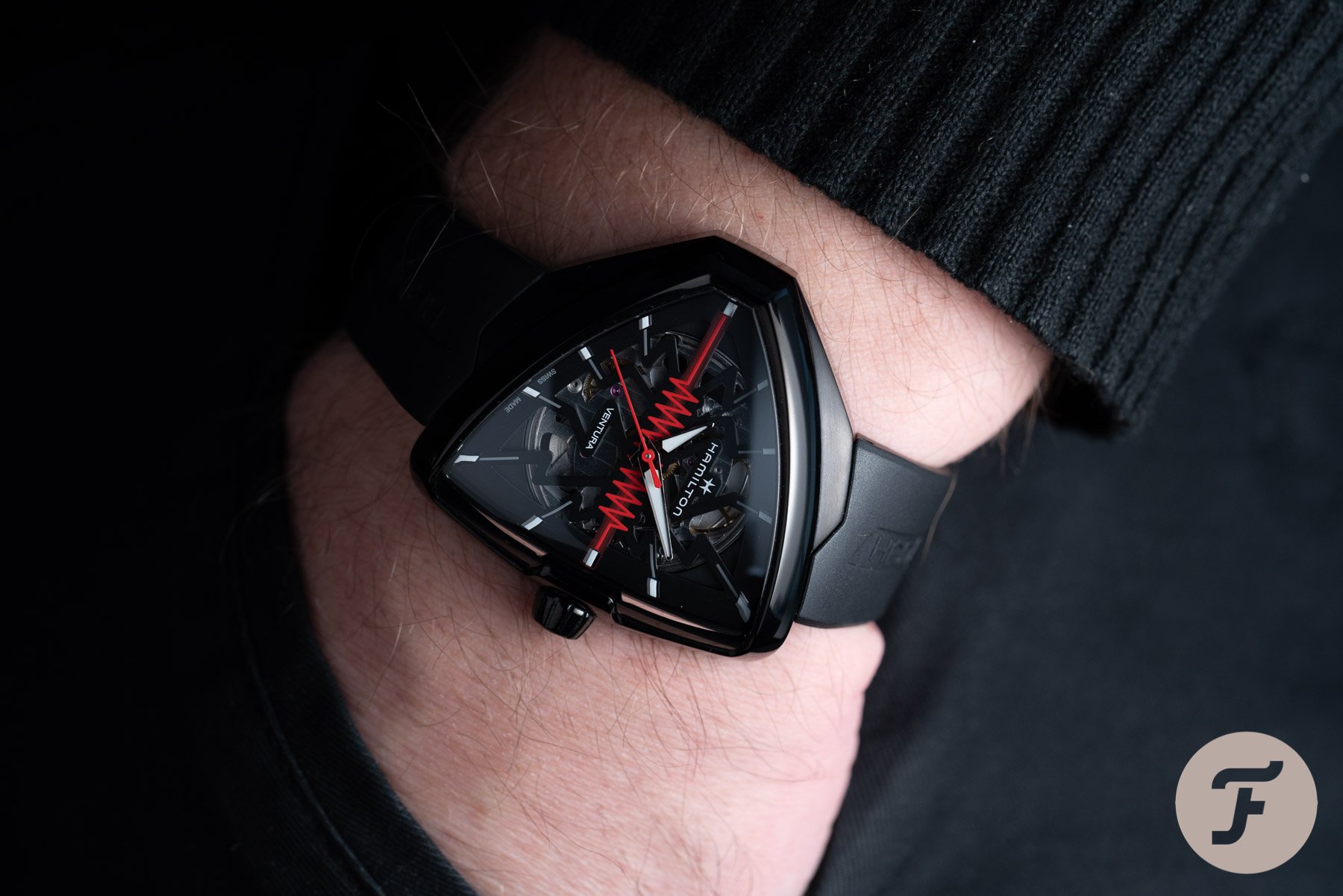 The triangular shape is definitely something to get used to though. Obviously because it’s a different basic shape for a watch. But because that shape is different, reading the time is also different. As fellow Fratello team member Andreas explained, it does take a short time of habituation to get comfortable with the deformed dial. But once you have worn the watch for some time, you won’t even notice the difference when simply reading the time. 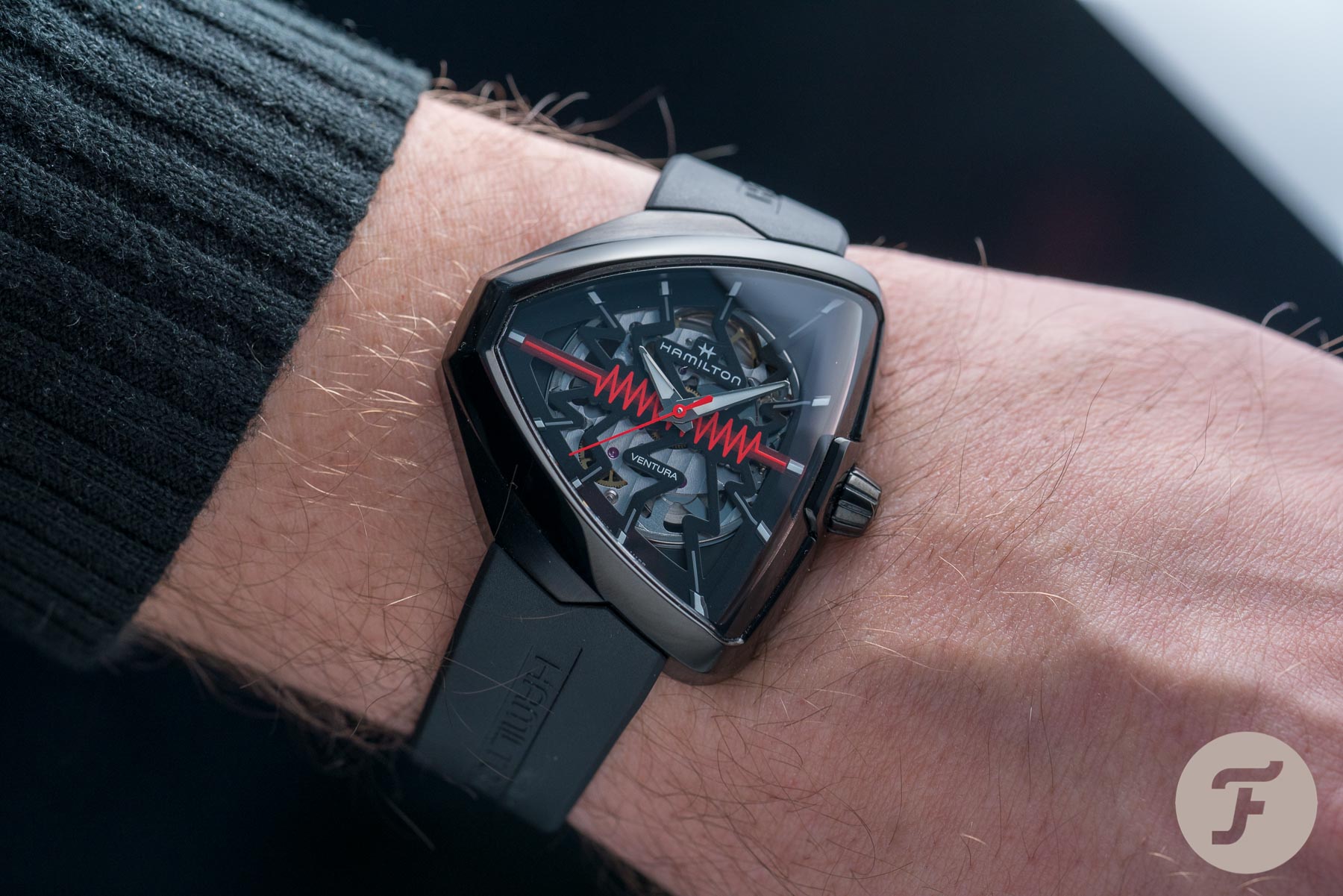 Wearing the watch also gives you a better idea of all the different details that make this a special watch. For instance, the curved sapphire spectacularly because follows the shape of the case. And the shape of the crown perfectly fits the design of the case. It’s both perfect in its dimensions as in its design. Or the really comfortable rubber straps that come with a pin buckle and balance the watch perfectly on your wrist. 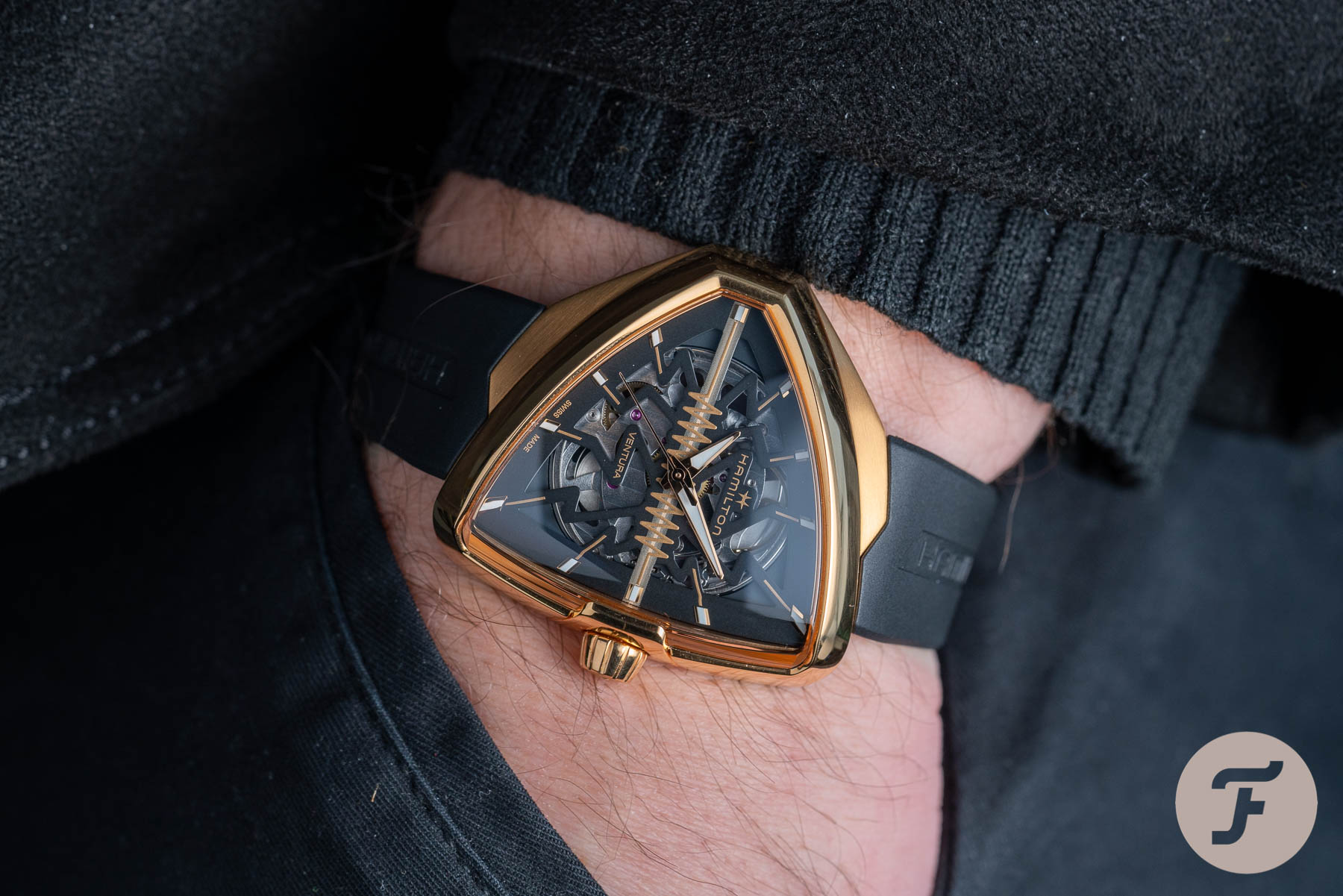 After wearing both Skeleton models, I do have a preference for the rose gold model. And the reason is simple. Both of the watches do justice to what the Ventura is and what it can be. The stealthy black model is the more futuristic of the two and a great possible step into the future of the Hamilton Ventura. But as someone who has been to Graceland and visited Elvis Presley’s last resting place, I simply like the rose gold version a bit better.

It’s simply a better reminder of Elvis Presley and the time the Hamilton Ventura was conceived in. And the rose gold and black colors look great. And with both watches priced at €1,695, it is a simple pick of your favorite aesthetics.

Having said that, both watches are an acquired taste. Would I like to own one as a design enthusiast? I have to say that I am a bit more conservative when it comes to watches. There is no denying the Ventura Elvis80 collection is one for fans that like something different. And as it turns out, I like different, but not something completely different.

But as said before, both of the Skeleton models show that there is a futuristic potential for this icon of the 1950s. And they can potentially draw in a younger crowd that loves a bold design statement. And we have to give Hamilton credit for exploring new territory with the Ventura Elvis80 collection. Because as an icon in the industry it should always be available, but it doesn’t mean you have to keep everything as is. And that’s what Hamilton has perfectly understood.

Hot Topics
Dear Watch Fans, Why So Angry? — Don’t Let Your Passion Get The Better Of You
97 comments
Hands-On With The Polarizing Tudor Black Bay Pro
70 comments
The Unexpected Perfect Two-Watch Collection — Rolex Sea-Dweller And Day-Date
69 comments
Introducing The New Fortis Stratoliner — Tested For Space Travellers
57 comments
Hands-On With The Rolex GMT-Master II 126720VTNR “Destro” — Does It Make Any Sense?
47 comments
Popular
Two Patek Philippe Nautilus Watches: 3700/1A Versus 5711/1A
Robert-Jan Broer
15
You Asked Us: Nomos Orion as a dress watch?
Gerard Nijenbrinks
7
Why You Can’t Go Wrong With The Rolex Datejust
Robert-Jan Broer
3