While round (or round-ish) watches may be the bread and butter of the industry, there are always some anomalies. If you know of these anomalies, it’s probably because they’ve stuck around and stood the test of time. The Hamilton Ventura is possibly the most perfect example of an anomaly! Hamilton wears its heart on its sleeve and bears it all with its new skeletonized XXL Ventura.

The Ventura case is an asymmetrical “arrow-shaped” watch that was made famous by The King. Of course, I’m talking about rock ‘n’ roll royalty here, the legend that is Elvis Presley. Debuting in 1957, the Hamilton Ventura was the world’s first electric watch powered by a battery. But, it was its appearance on the wrist of Elvis Presley in the 1961 musical comedy Blue Hawaii that catapulted it to stardom. Elvis was at the height of his fame when the Ventura shared screentime with him, and it was this association that made the Ventura into the cult icon of watchmaking that it is today. 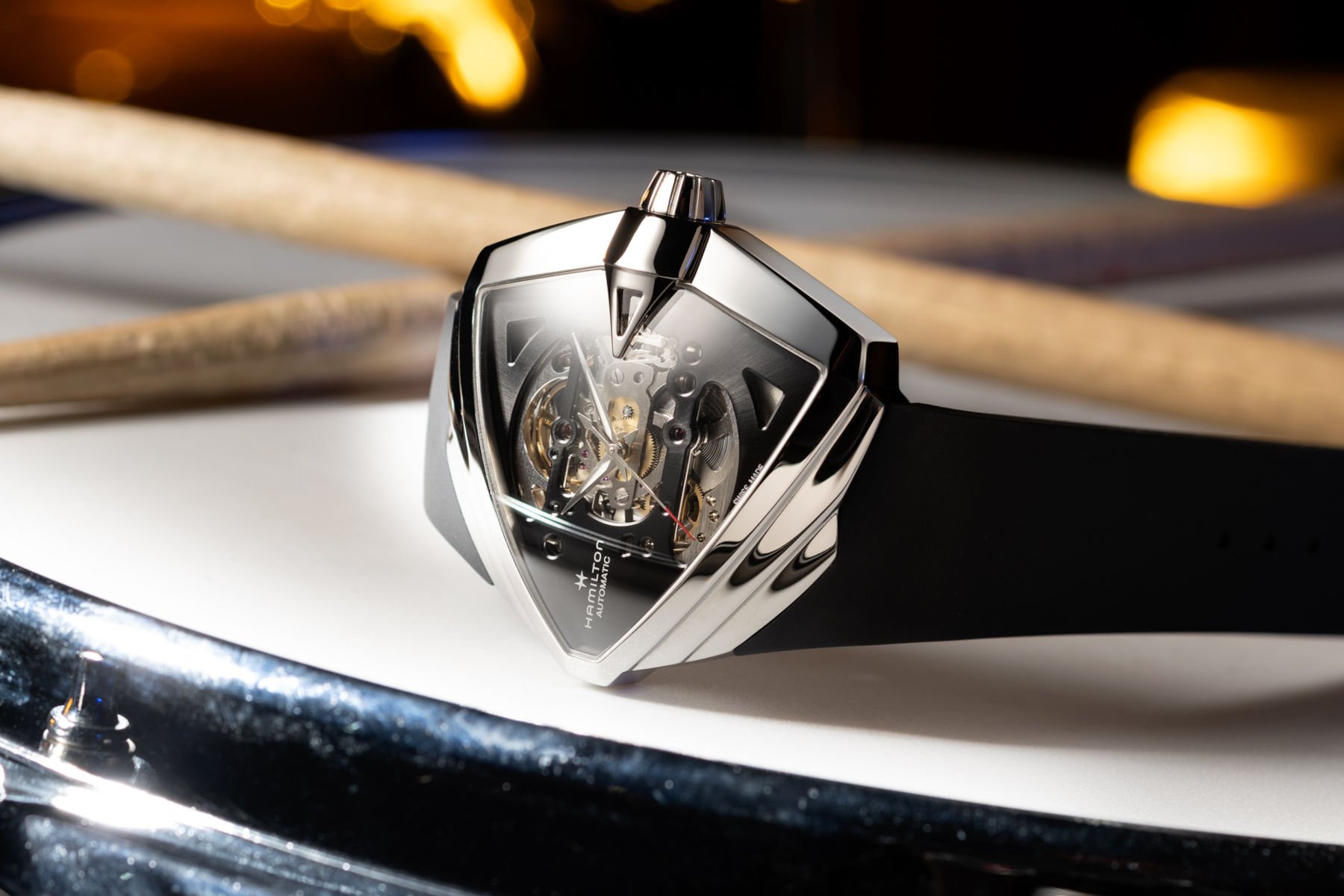 Size is a very personal preference when it comes to timepieces. Due to the variation in wrist sizes, vastly different sizes of watches are required to cover all bases. The Hamilton Ventura ensures nobody is left out with sizes ranging from S right up to XXL, as we see on the new XXL Skeleton model here. While Elvis wore a more demure size befitting the 1960s, the new 46mm XXL ensures that the larger wristed fans are not left out of the Ventura fun!

Hamilton upsized the iconic case shape, which, in turn, allowed arresting cutaways in the metallic dial to reveal a brand new skeletonized movement beneath. The case style remains true to the late ’50s original, but of course, it’s not identical every way. Over the years, Hamilton has made subtle tweaks and changes to the lines and the shape, but the identity remains quintessentially Ventura. 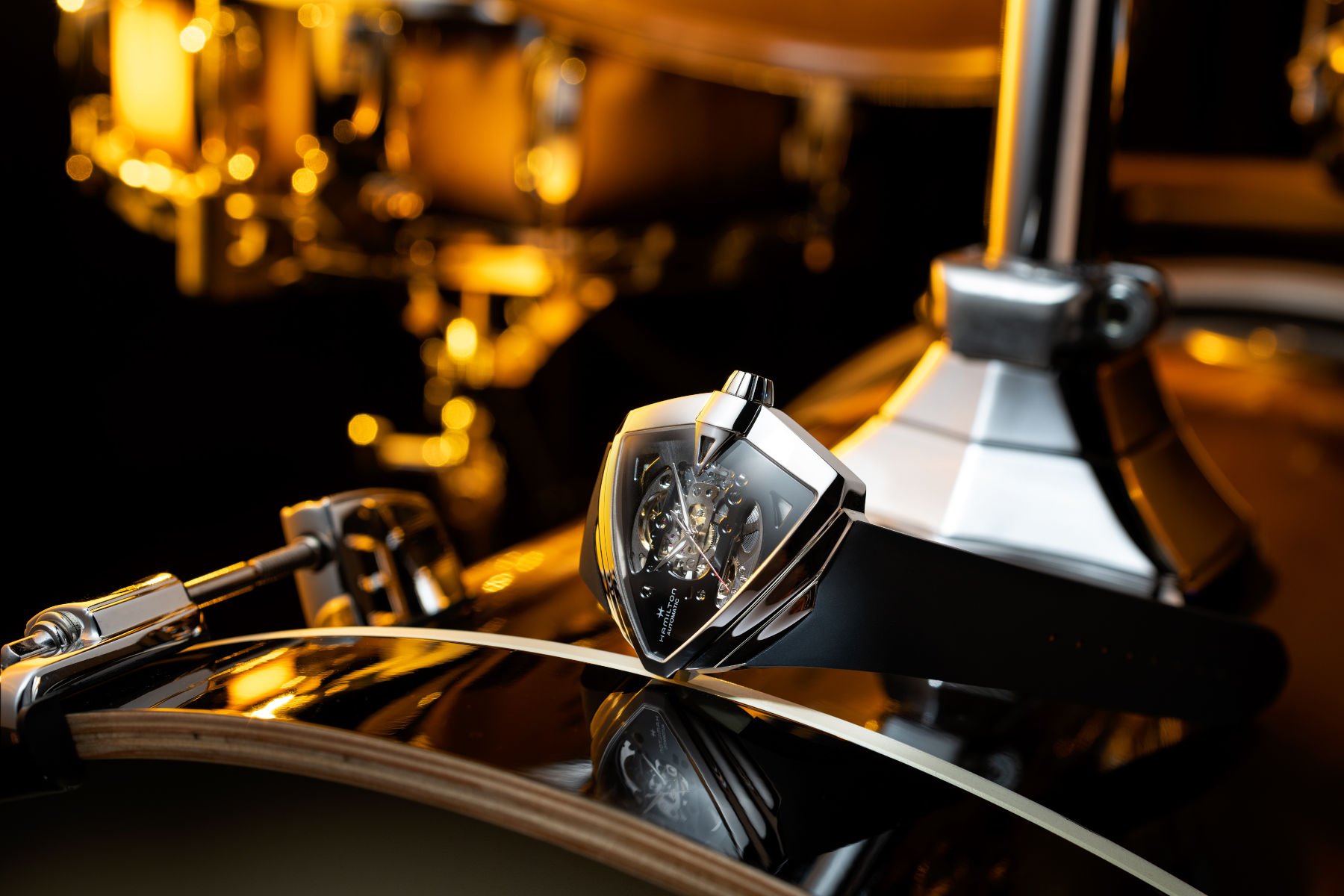 Straight to the heart

As you’d expect from the name, one of the main draws of the XXL Ventura Skeleton is the dial. Or perhaps I should say not the dial itself, but rather, the view through it to the movement within. Skeleton watches can be quite hit and miss, with it being all too easy for the result to appear “cheap”. As such, there’s often little middle ground in the eyes of the collectors. They’re either loved or hated. Thankfully, Hamilton has taken a slightly more reserved approach here. I think it’s the right one, too, as a wildly skeletonized dial would end up fighting for attention with the quirky Ventura case, and the overall combined impact would suffer. I believe the XXL Ventura Skeleton offers a nice balance here without being too gaudy.

It was developed to resist magnetic fields and offer stable performance across a wide range of temperatures.

The movement that we see peeking through that dial is the ETA C07.901, which has a Nivachron balance spring and 80 hours of power reserve. If you’re wondering what Nivachron is, it’s not just a fancy marketing term without substance. Nivachron is a special metal alloy developed by the Swatch Group. It was developed to resist magnetic fields and offer stable performance across a wide range of temperatures. When it comes to our watches’ accuracy, magnetism and fluctuating temperatures are not our friends. 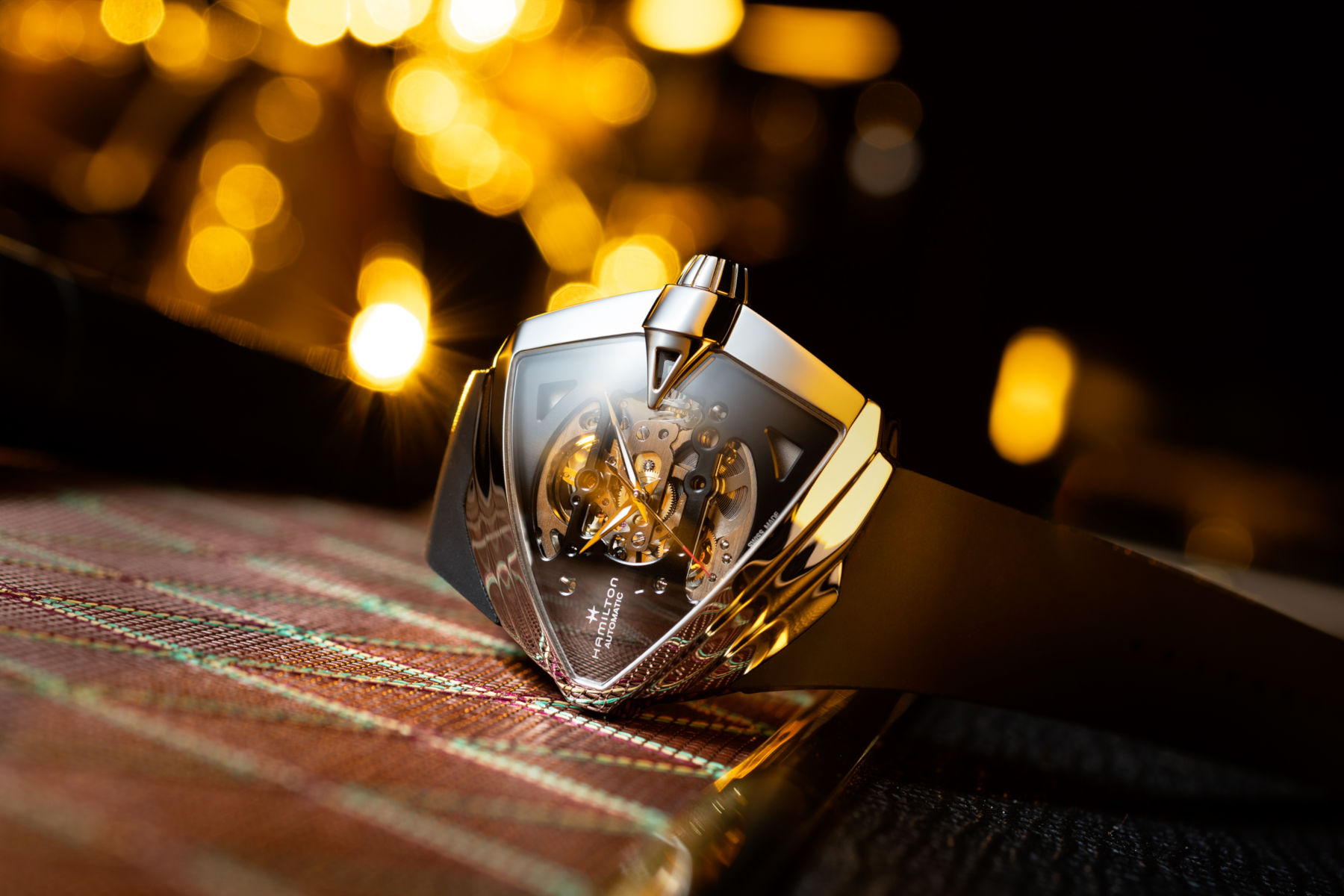 So there we have it; a quirky new addition to the already quirky Ventura family. While its radically unique personality may not be for everyone, the Ventura doesn’t shy away from the stage and putting on a show. With that in mind, it now feels like the obvious choice of watch for The King himself! What do you make of the Hamilton Ventura? Can you help falling in love, or is it the devil in disguise? Let me know in the comments below!

The Hamilton XXL Ventura Skeleton retails for €1,765. For more information on the entire Ventura collection, check out the Hamilton website.

Hot Topics
Laventure Automobile Chronograph With A Proprietary Movement — Marking A Huge Leap Forward For One Of The Industry’s Most Promising Brands
155 comments
Fratello Exclusive: An Inside Look At The MoonSwatch Production Facilities
75 comments
Selling Your Watch To A Dealer Or Trading It In — Tips From A Former Watch Dealer
49 comments
Summer Splash — Round 2 : Jorg’s Tudor Pelagos FXD Vs. Lex’s Hublot Big Bang Integral Ceramic Sky Blue
47 comments
The Top 10 GMT Watches Right Now — From Ball, Grand Seiko, Tudor, And More
44 comments
Popular
A Question From A Reader: “Which Modern Speedmaster Is Closest To The Original Moonwatch?”
Robert-Jan Broer
13
Hands-On With The Seiko Prospex Dawn Grey Series
Robert-Jan Broer
9
Two Patek Philippe Nautilus Watches: 3700/1A Versus 5711/1A
Robert-Jan Broer
15