This may be my favorite Breguet...
Sky Sit
comments 4
Share

A magnificent dial-side showcase of the engine has been Breguet’s house style for its Tradition collection. These epic open-worked timepieces honor the brand’s watchmaking tradition for over two centuries in their modern interpretations and executions. And if you want to experience a watch with all of Breguet’s history rolled into one timepiece, you cannot miss the Tradition 7047. This “Grande Complication” watch with a fusée tourbillon has just been given a new color scheme in regal blue to enliven its mechanical marvel. 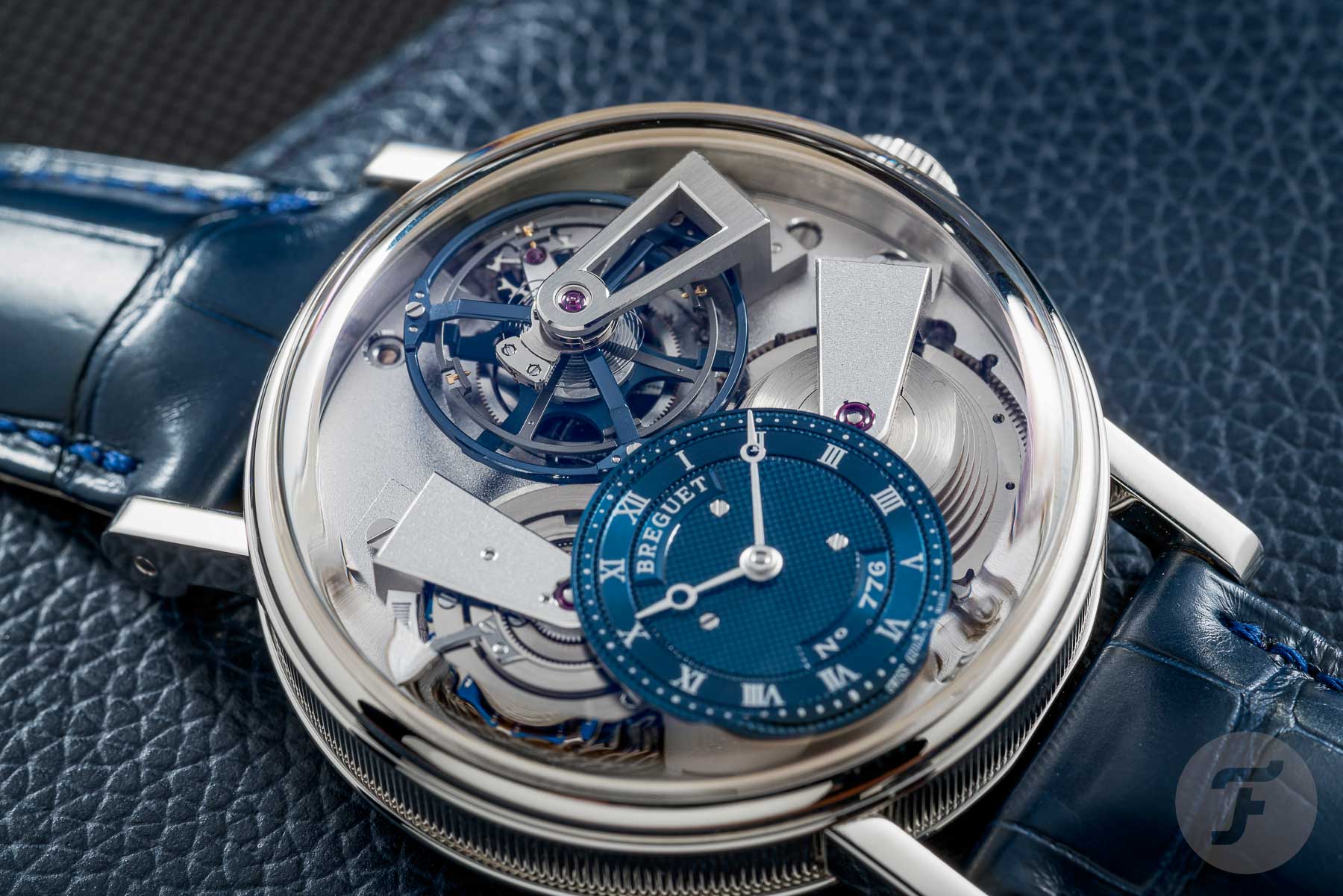 Forming the landscape of the dial, the tourbillon and the fusée-and-chain of the Tradition 7047 are naturally the centerpieces. Both of these centuries-old components were created to improve timekeeping accuracy for pocket watches. The truth is, as we’ve advanced to wristwatches and have made technical and material innovations, both have been replaced by more effective solutions. However, by utilizing these antiquated mechanisms in present-day expressions, it is heralded in the world of Haute Horlogerie as the pinnacle of mastery and artistry. In this case, given the tourbillon was invented by Breguet’s very own founder, Abraham-Louis Breguet, it is almost the Tradition 7047’s birthright to enthrall us. 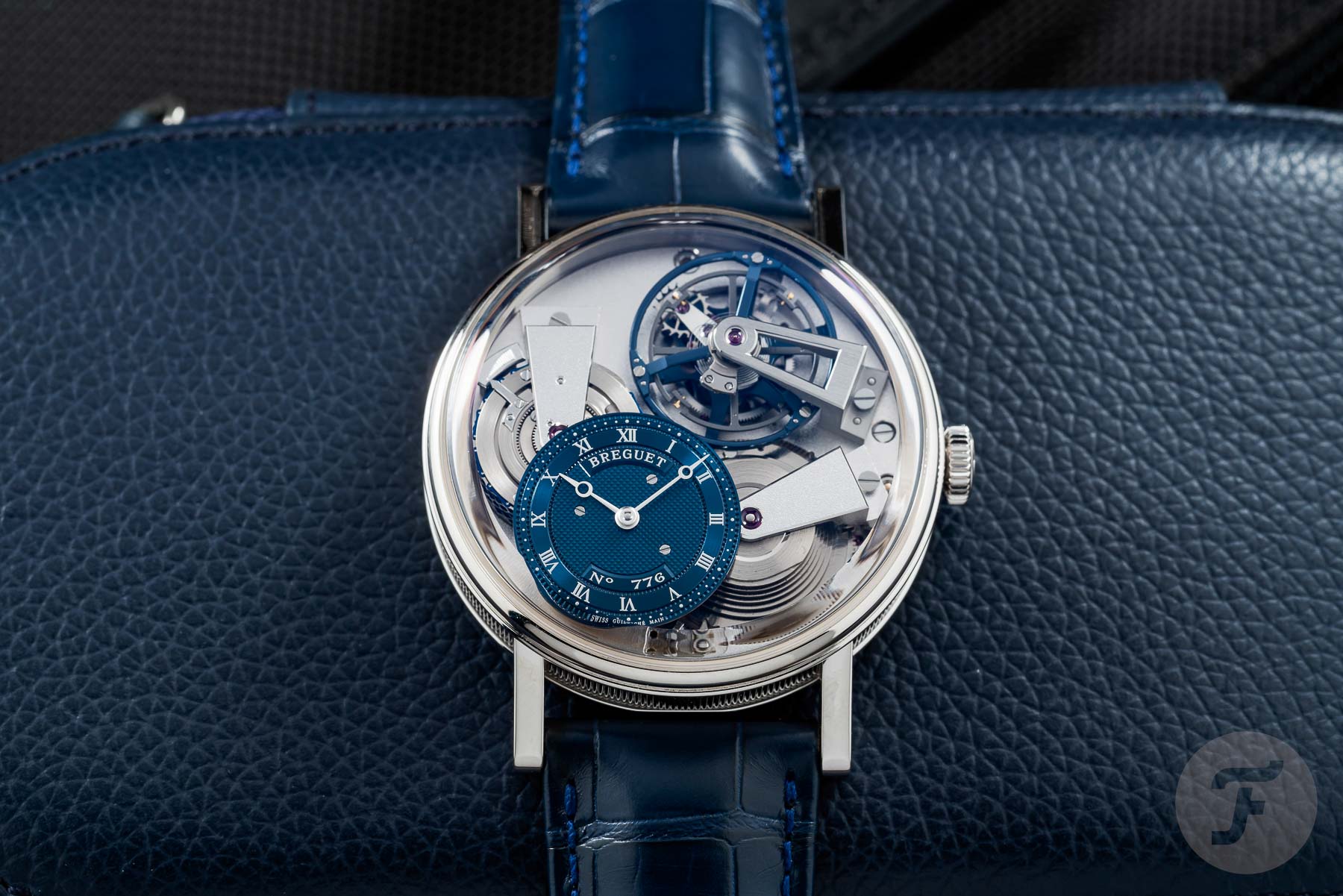 Now, that would have sufficed to make this review short and sweet. And I could reach for my glass of tipple while leaving you to admire the most celebrated horological mechanism of all time. For the uninitiated, I would still leave you to get educated on the much-discussed 221-year-old ingenious invention with RJ here and with Rob here. Unfortunately for me (and fortunately for you), we are not done yet. There is just this curveball that Breguet has thrown with the fusée. Not only is this archaic device a rather uncommon sight nowadays, but it has also been enhanced with a blued chain in this new 7047 for our visual pleasure. 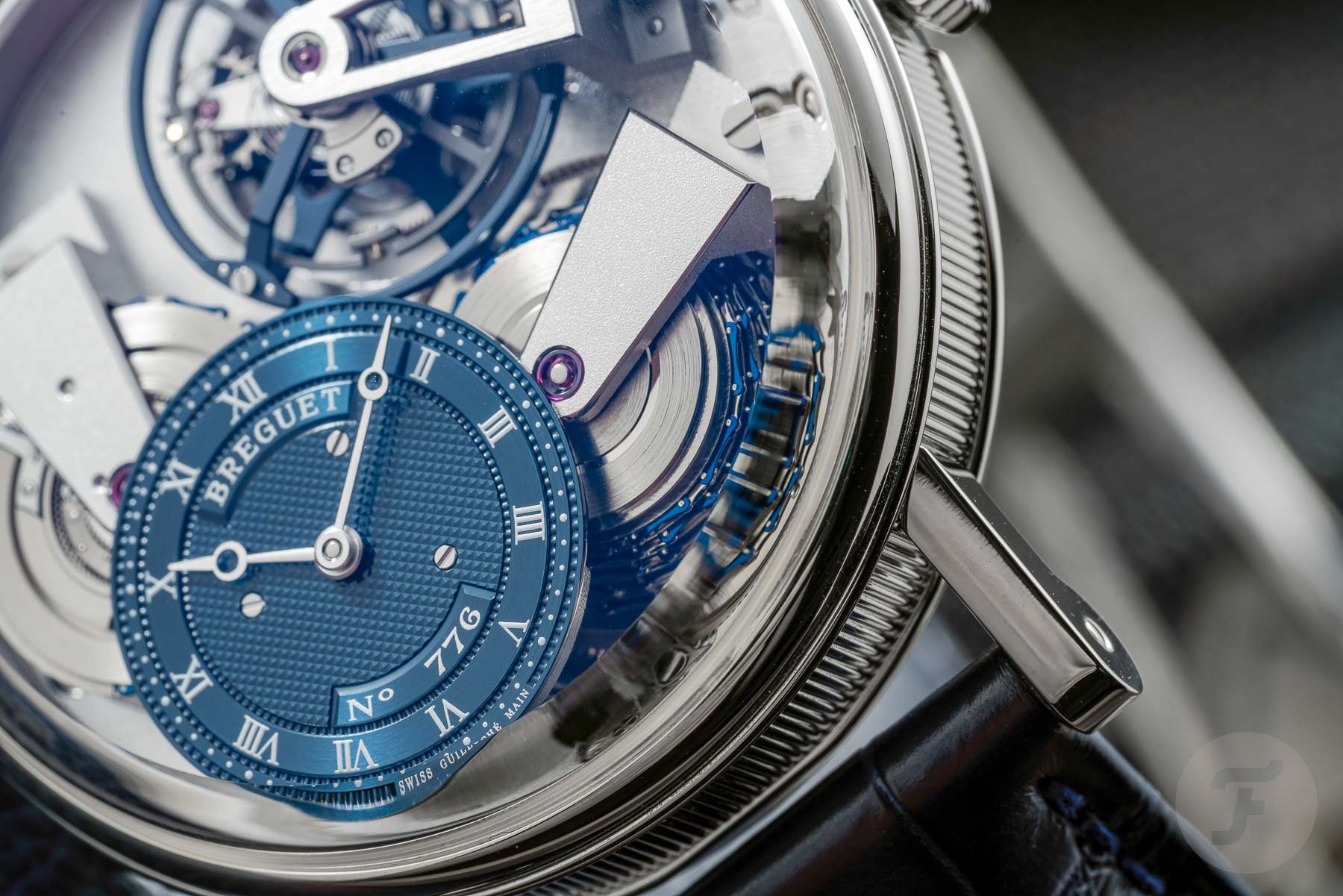 The fusée is known as a constant-force mechanism and was first incorporated into a modern wristwatch only in 1994. It acts as a conical gearbox with a chain connecting the crown to the barrel and regulates a steady flow of power to the balance. As we wind the crown, we transfer energy to the mainspring inside the barrel. In most movements, the force released from a full barrel wanes as the mainspring gradually unwinds, which makes the watch run slow. 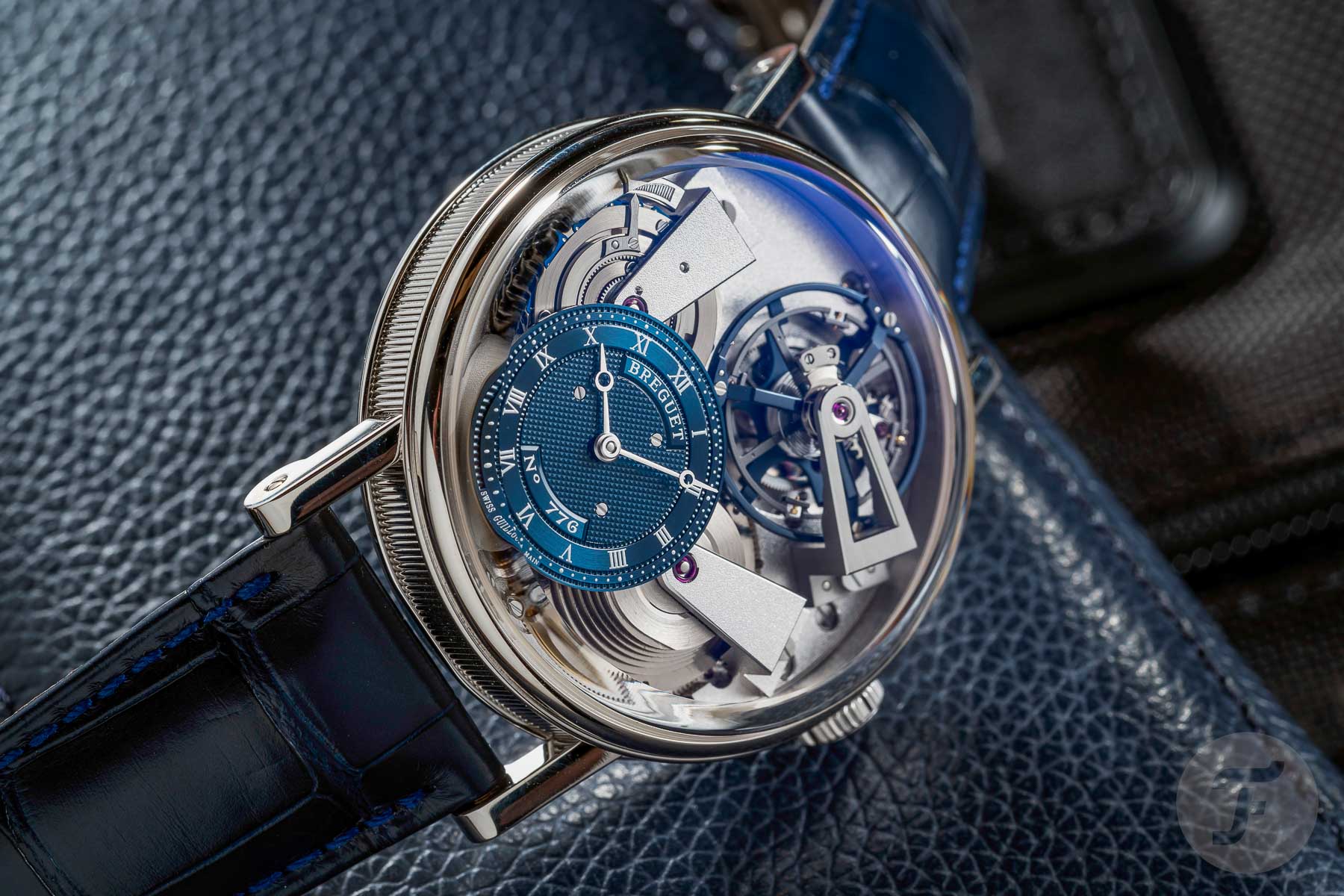 That’s where the fusée came in. The fusée gears work like those of a bicycle to compensate for abating force and to even out the power. To that end, the chain moves from essentially a stiff gear ratio at the top of the fusée to one that gives far more mechanical leverage towards the bottom, like going into the low gears of a bicycle. The fusée-and-chain transmission, therefore, discharges the same amount of torque throughout and keeps the watch running at an exact rate no matter the winding level. 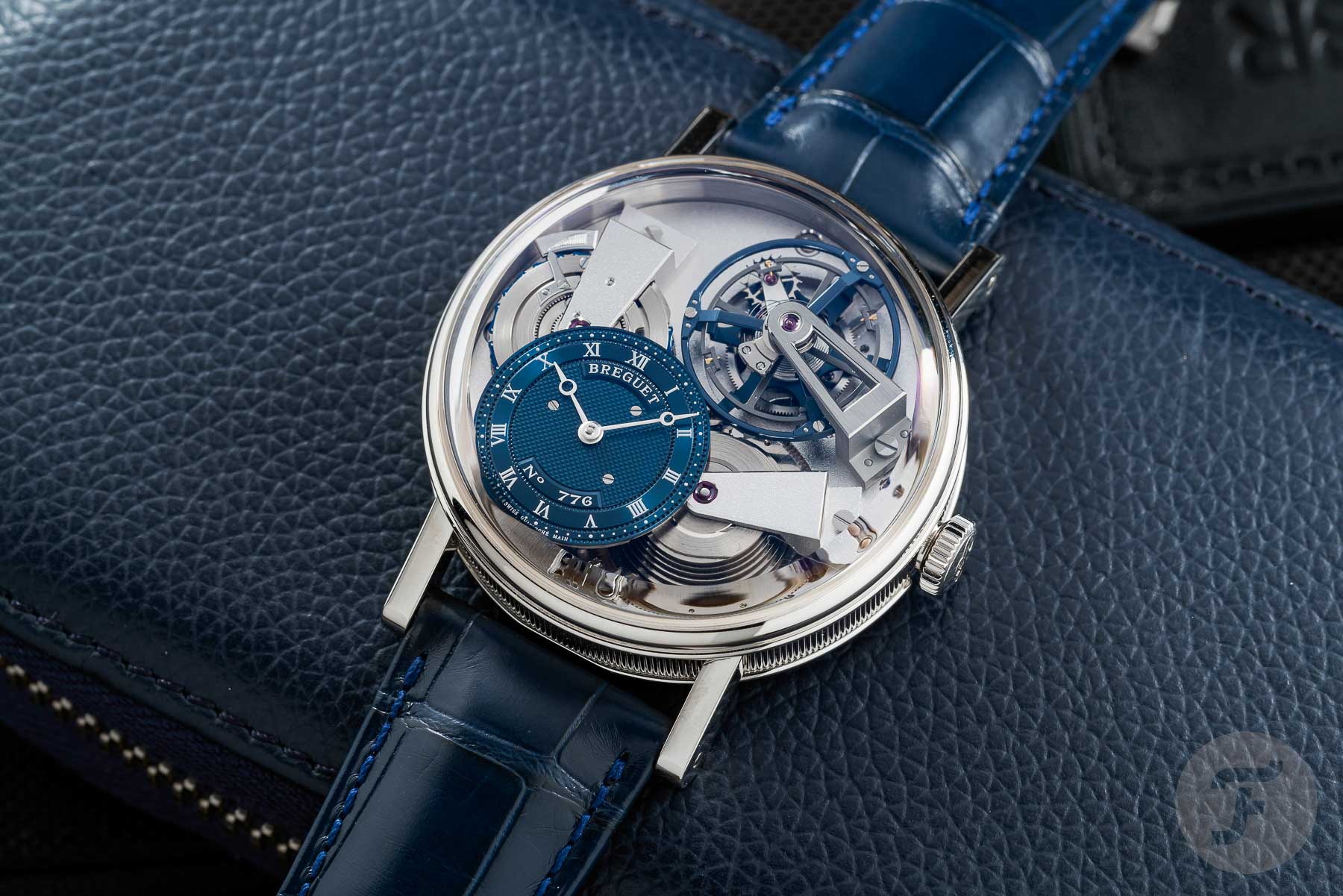 The fusée in the Tradition 7047

Of course, a micro-mechanical assembly of this kind (and even just the chain itself) involves hundreds of components and requires exceptionally greater effort to make the structure robust. It’s no wonder that you don’t see it in many watches. But I’m glad that Breguet is finally reaching the point of highlighting the action (after three prior 7047 variants) with those exquisite blued links in the chain. Upon a full wind, the 7047’s fusée constant-force mechanism provides 50 hours of power reserve. And what makes this contraption even more endearing is the power reserve indicator. Without stealing any limelight, the gauge faithfully sits on the west side of the dial atop the barrel. 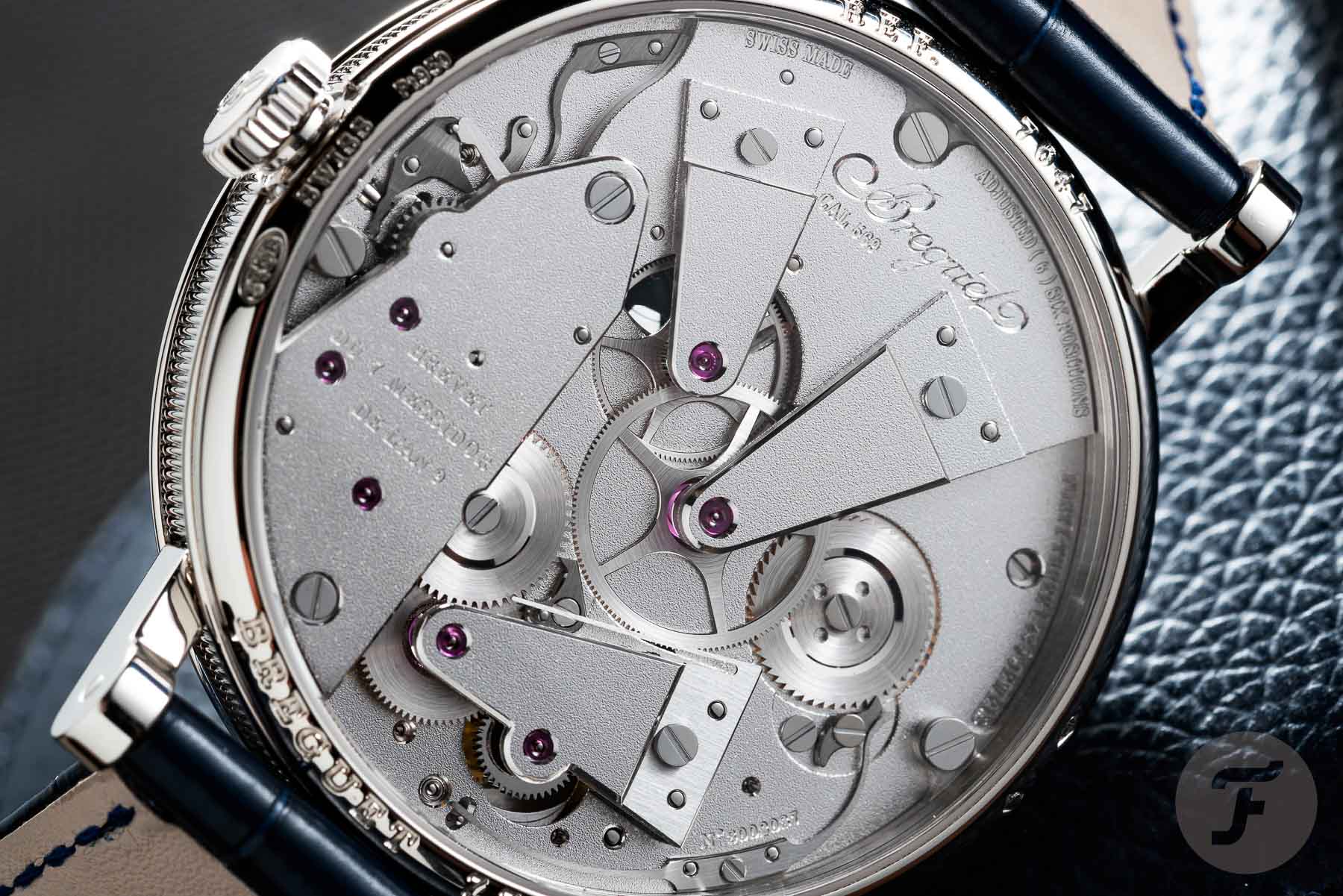 An ancient craft made cutting-edge

And all that power talk is important because it is the lifeline for the hand-wound movement in the Tradition 7047. This rhodium-plated Breguet Caliber 569 comprises 542 components and 43 jewels, including that aforementioned spectacular tourbillon with a stately oscillating frequency of 18,000vph (2.5Hz). Naturally, the free-sprung balance employs the well-known Breguet overcoil hairspring, another invention of Abraham-Louis Breguet, now made of silicon and often adopted by other brands in premium watches. Silicon is hailed as the high-tech material in present-day watchmaking for its non-magnetic, anti-friction, and corrosion-resistant properties. It is also used for Breguet’s own creation of the silicon horns and wheel in the inverted straight-line lever escapement in the caliber 569. The tourbillon itself is massive and highlighted by its beautifully blued cage. The tourbillon cage and balance wheel are made of titanium whereas the balance weights are solid gold.

And let’s not forget that the movement is meticulously finished on both the front and back. Every tiny piece of it is decorated by hand, just as it would have been two centuries ago. The blasted finish and those wheels and bridges share the same design code as other Tradition watches, which is a nod to the original Souscription watch that inspired the collection (you can refer to my review of the Tradition 7597 for the backstory). Not only can you admire the impeccable craftsmanship through a full-diameter sapphire case back, but you can also feel the depth of the inner workings through a mighty domed sapphire crystal on the front.

All those mechanical and artisanal wonders culminate in the ultimate display — the time. For the Tradition 7047, it is presented on a blued off-center dial that encompasses several Breguet signatures. Instantly recognizable elements are the hand-guilloché dial in a Clous de Paris motif, the satin-finished hour track featuring traditional Roman numerals, and the original Breguet blued hands, designed by the founder, indicating the hours and minutes. 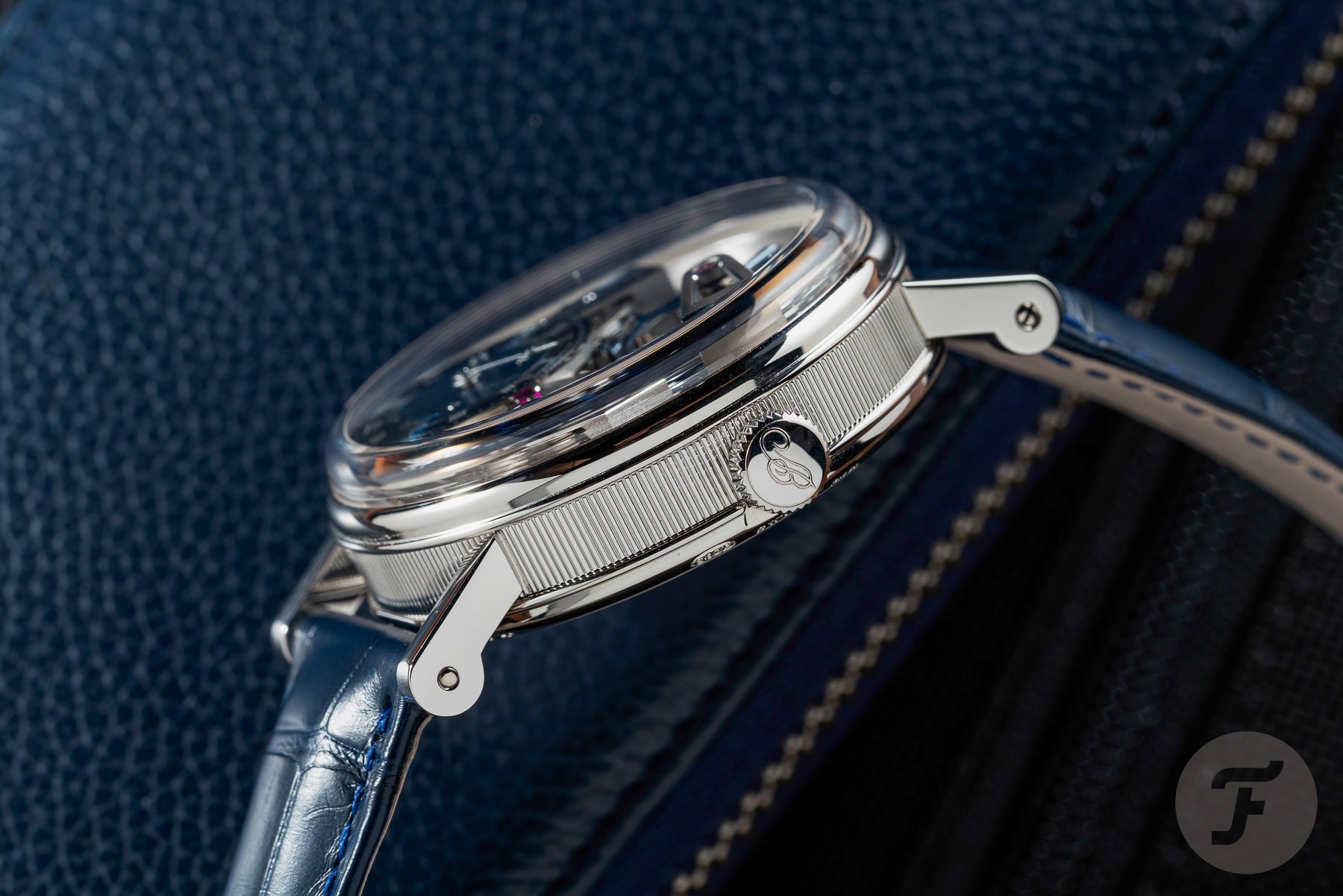 The full historical glory is enshrined in a 41mm platinum case with a finely fluted band and classic Breguet lugs. The craftsmanship of the case is top-notch. The overall height runs up to 15.95mm, which gives room for the movement architecture to stand tall and proud. And with quite a portion of the thickness being the sapphire crystal, it somehow gives an optical illusion of a smaller profile. The new Tradition 7047’s regal blue color scheme is a running theme for many of the brand’s latest releases. To complete the look, this model is fitted with a midnight-blue alligator strap secured by a triple-blade platinum folding clasp. 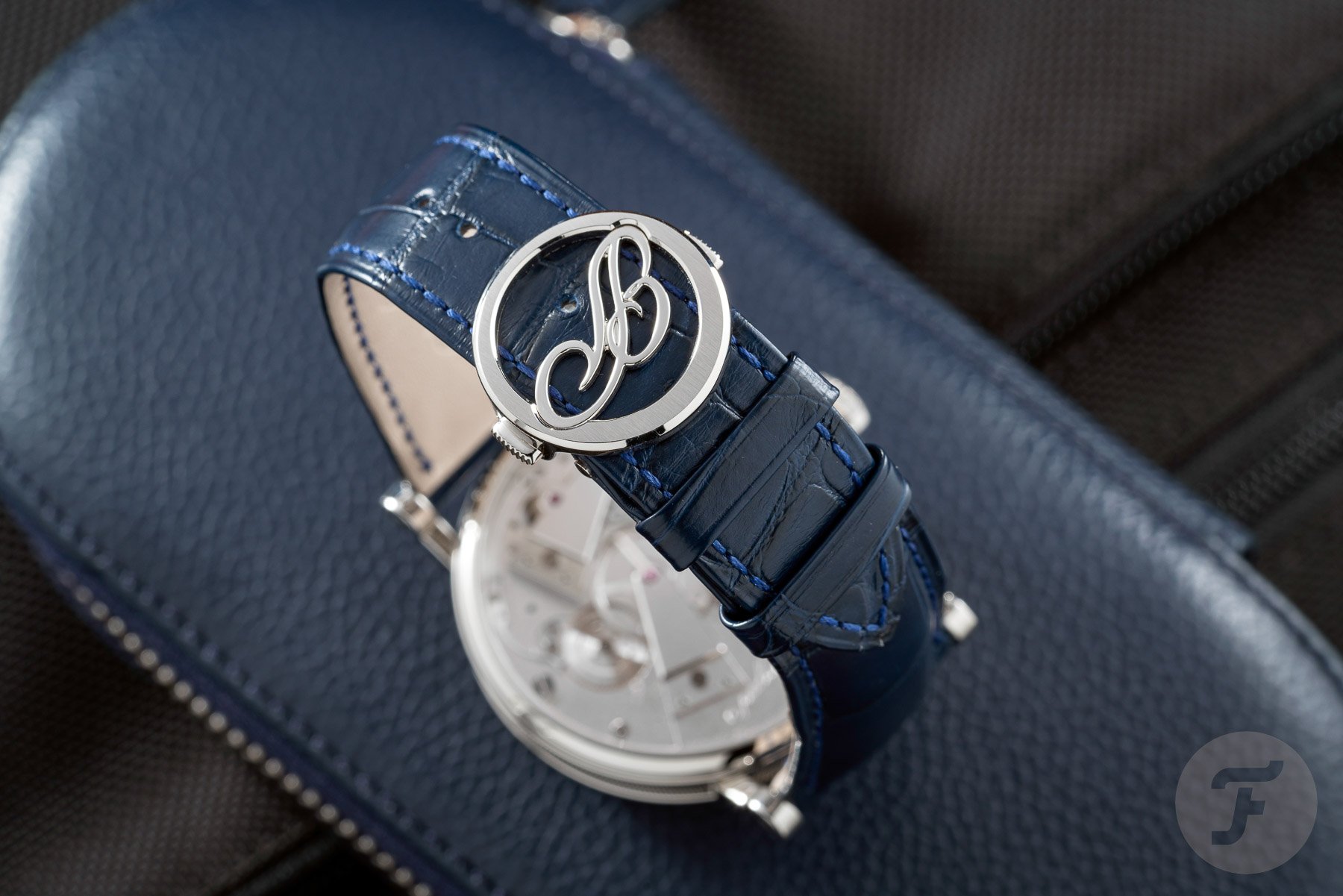 The Tradition Fusée Tourbillon in this regal blue dress is without a doubt my favorite of the whole Tradition family. It may even be my favorite of all modern Breguet timepieces. I love its old-school design and industrial feel for a top-of-the-line masterpiece. The visual composition is the cleanest and most calming of all the Tradition offerings, albeit housing two of the most elaborate vintage mechanisms. There are no dazzling or attention-seeking gimmicks, just good old high-horology mechanics in a latter-day legendary style. The Tradition Fusée Tourbillon is packed with milestones of the past, and in keeping with the times, injected with new technology. The 7047 certainly honors many of the founder’s inventions and showcases the achievements of the house of Breguet.

Hot Topics
Introducing: The Omega Speedmaster Super Racing With Spirate System
165 comments
Design Vs. Specs — Which Is More Important To You When Buying A Watch?
87 comments
New Release: The Limited-Edition Seiko Prospex SLA067J1 Diver
64 comments
My Predictions For New Omega Speedmasters In 2023
60 comments
The Best Independent/Microbrand Alternatives To The Rolex Explorer In 2023
53 comments
Popular
10 Tips For Better Watch Photography
Bert Buijsrogge
12
You Asked Us: Rolex Submariner vs Omega Seamaster
Robert-Jan Broer
25
You Asked Us: Nomos Orion as a dress watch?
Gerard Nijenbrinks
10