When writing about a timepiece made by Hermès, it is legit to ask yourself fashion-related questions. At the same time, the French maison’s recently released pieces rise way above the level of fashion watches. The Hermès H08 Blue Edition is a timepiece with a fascinating color scheme. It pairs blue PVD-coated titanium with black ceramic, and a touch of archetypical Hermès orange is also present. This is a seriously good-looking watch with some very serious features. Find out how this dressy sports watch in the colors of FC Internazionale Milano performs in this hands-on review.

Hermès is not a Fratello regular, but whenever a timepiece from the brand comes along, it makes an impression. I’m talking about the exciting Arceau Le Temps Voyageur and the impressive Arceau L’heure de la Lune, for instance. Each of these watches pairs an unorthodox, contemporary design with a classic complication in a very original way. The Hermès H08 Blue Edition, however, forgoes complications and presents itself as a very well-dressed athlete. 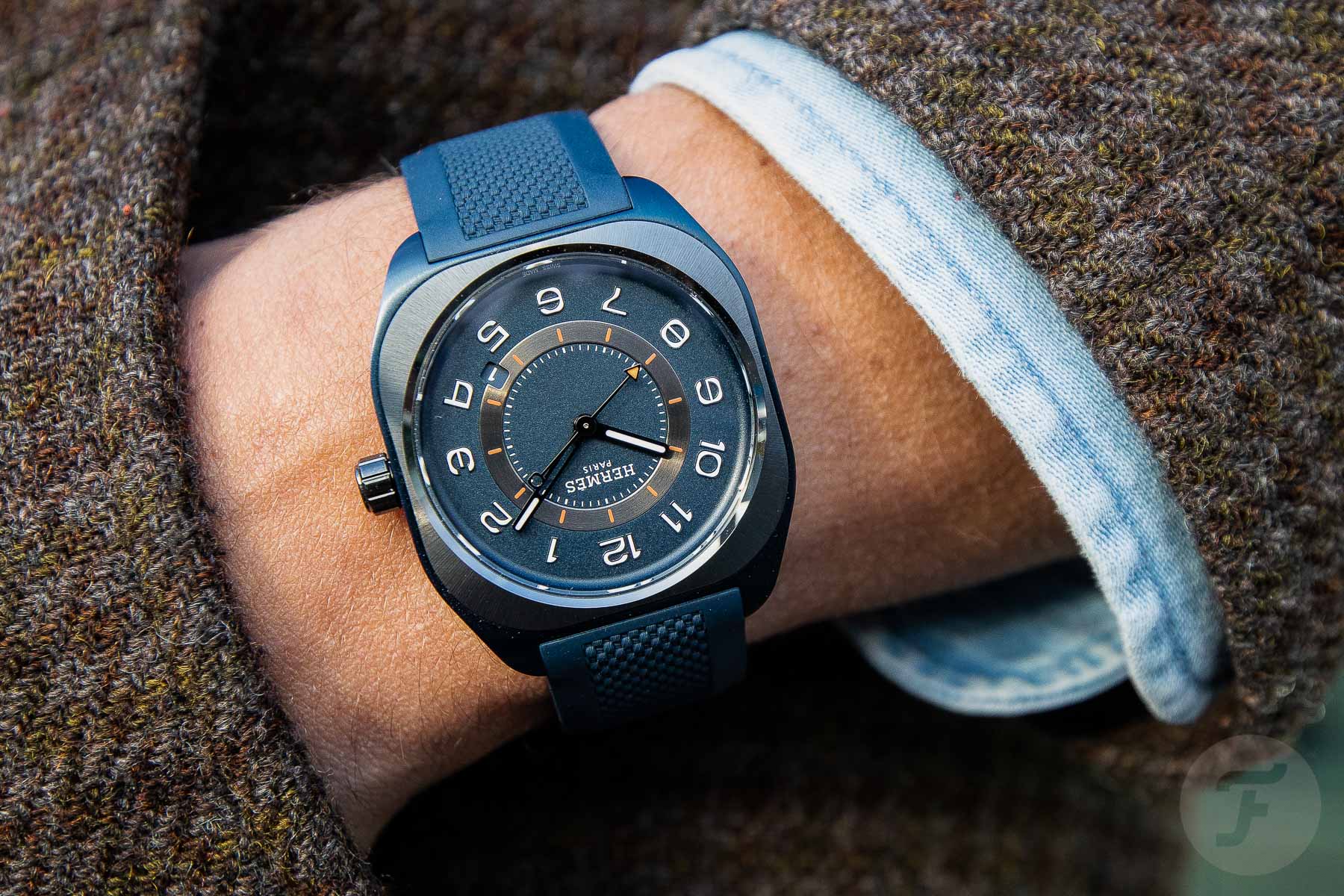 The Hermès H08 Blue Edition (€6,900) pairs very dark blue with black, a color combination that I have a little trouble with. I know that this color combo can both look sporty and powerful. One of the best football kits, in my opinion, is the black and blue one of FC Internazionale Milano, aka I Nerazzurri. Nevertheless, I struggle to wear black and blue in daily life. It’s probably because of the old sartorial rule that cautioned against wearing black and blue (especially navy) together that somehow has found a place in my subconscious. But, as one famous watch brand once wrote in its advertisements, “To break the rules, you must first master them.” In other words, if you know what you’re doing, black and blue — and any other combination of neutral colors — can look great together. The rule-breaking Hermès H08 Blue Edition provides further proof of that. 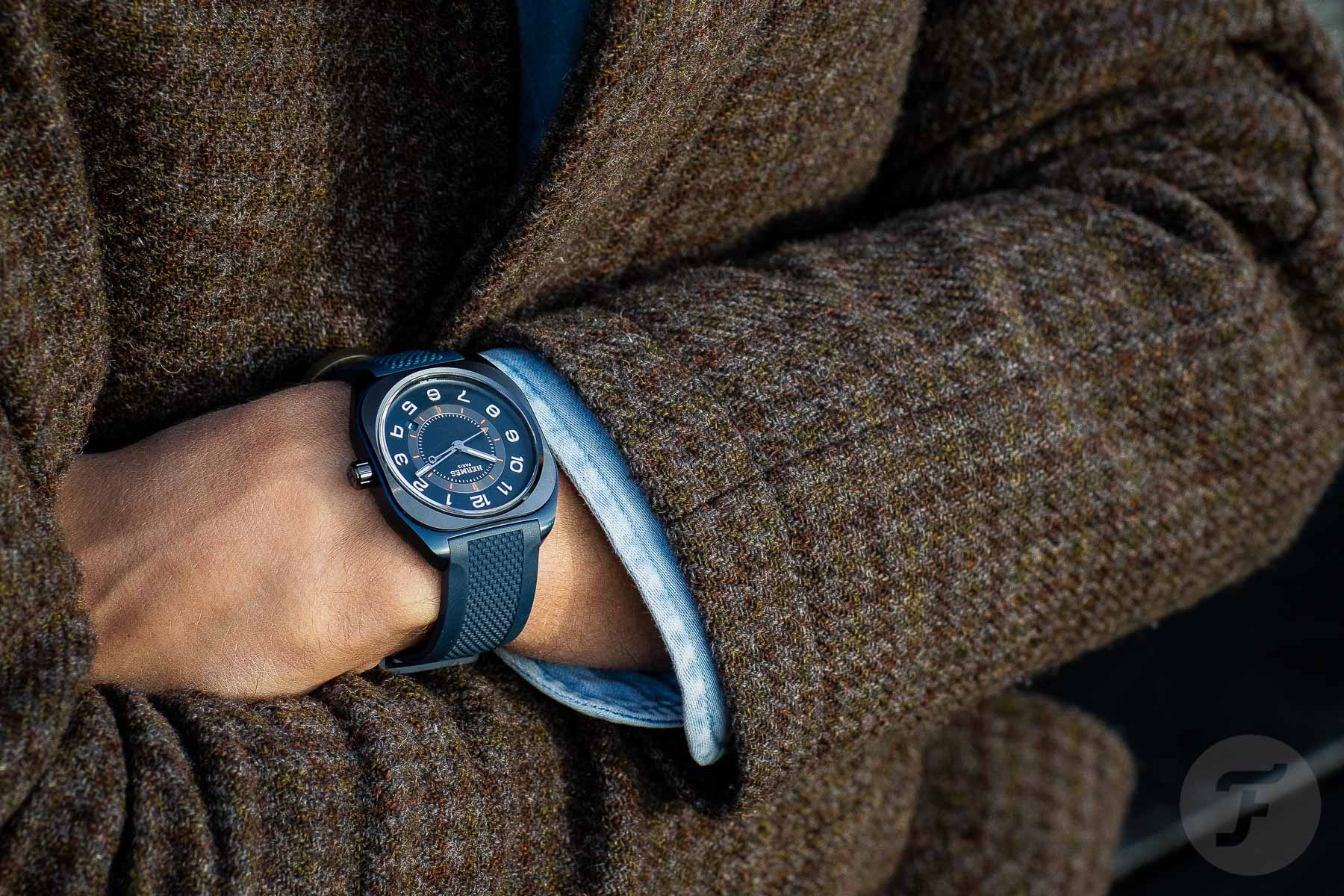 The Hermès H08 Blue Edition on the wrist

Wearing the Hermès H08 Blue Edition proved therapeutic since it helped me overcome my reluctance to combine black and blue. It also brought back a nice memory. When I joined the Fratello team in April 2021, the subject of my very first story was the introduction of the cushion-shaped H08 in titanium. Anyway, back to the H08 Blue Edition that’s on my wrist in December 2022. It is a watch I struggled with. No, not because of its looks, size, or choice of materials used, but because of the black DLC titanium folding clasp. I was fighting with it from the very beginning. It’s a dual-deployant design that allows for easy entry of the hand, but that means there is also a lot of moving parts. 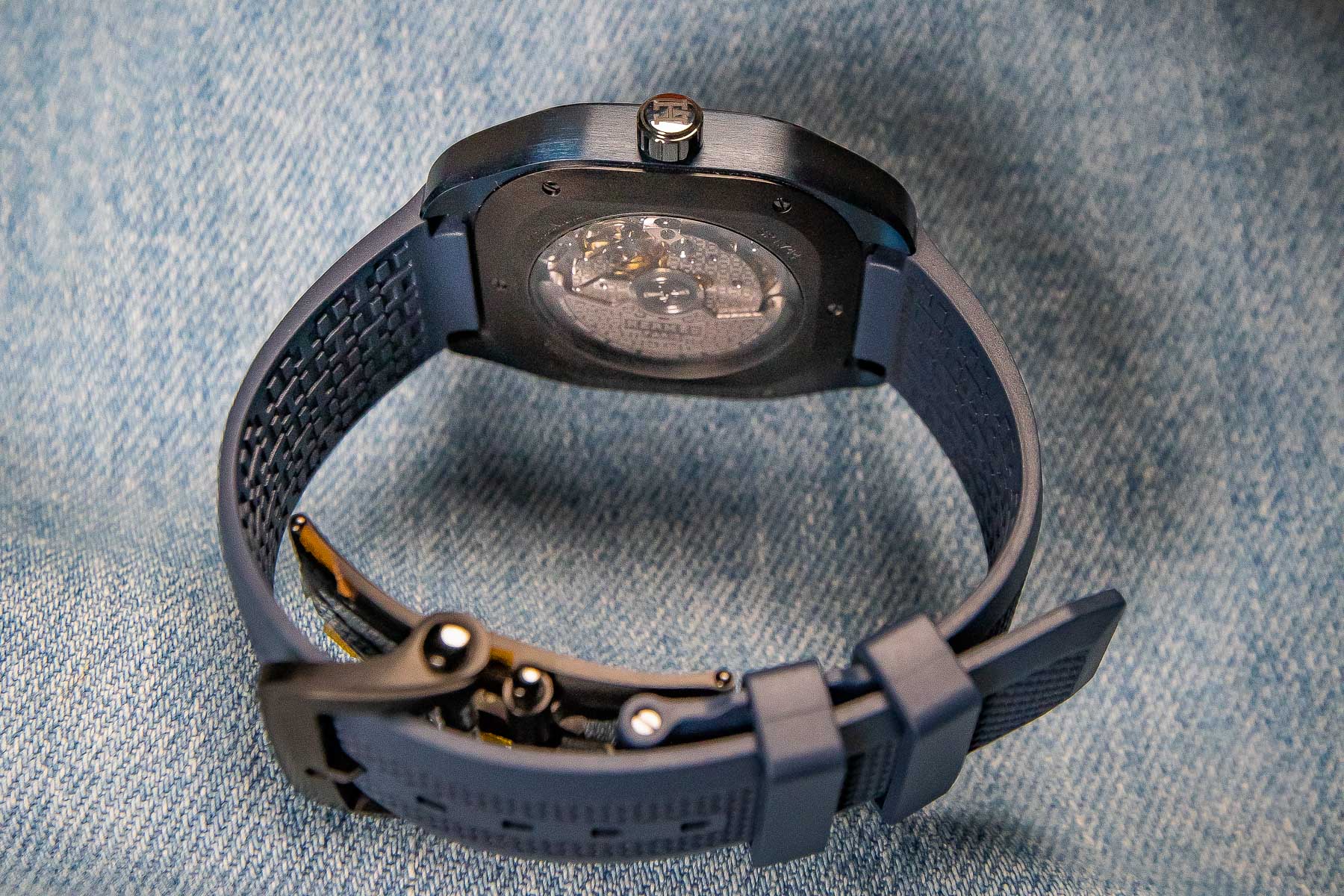 Maybe I lack the necessary motor skills, but I never got along with the butterfly clasp. It also kept opening while wearing the watch, but that was because I was handling a prototype clasp that was already abused by many watch journalists before me, Hermès explained (and apologetically so). 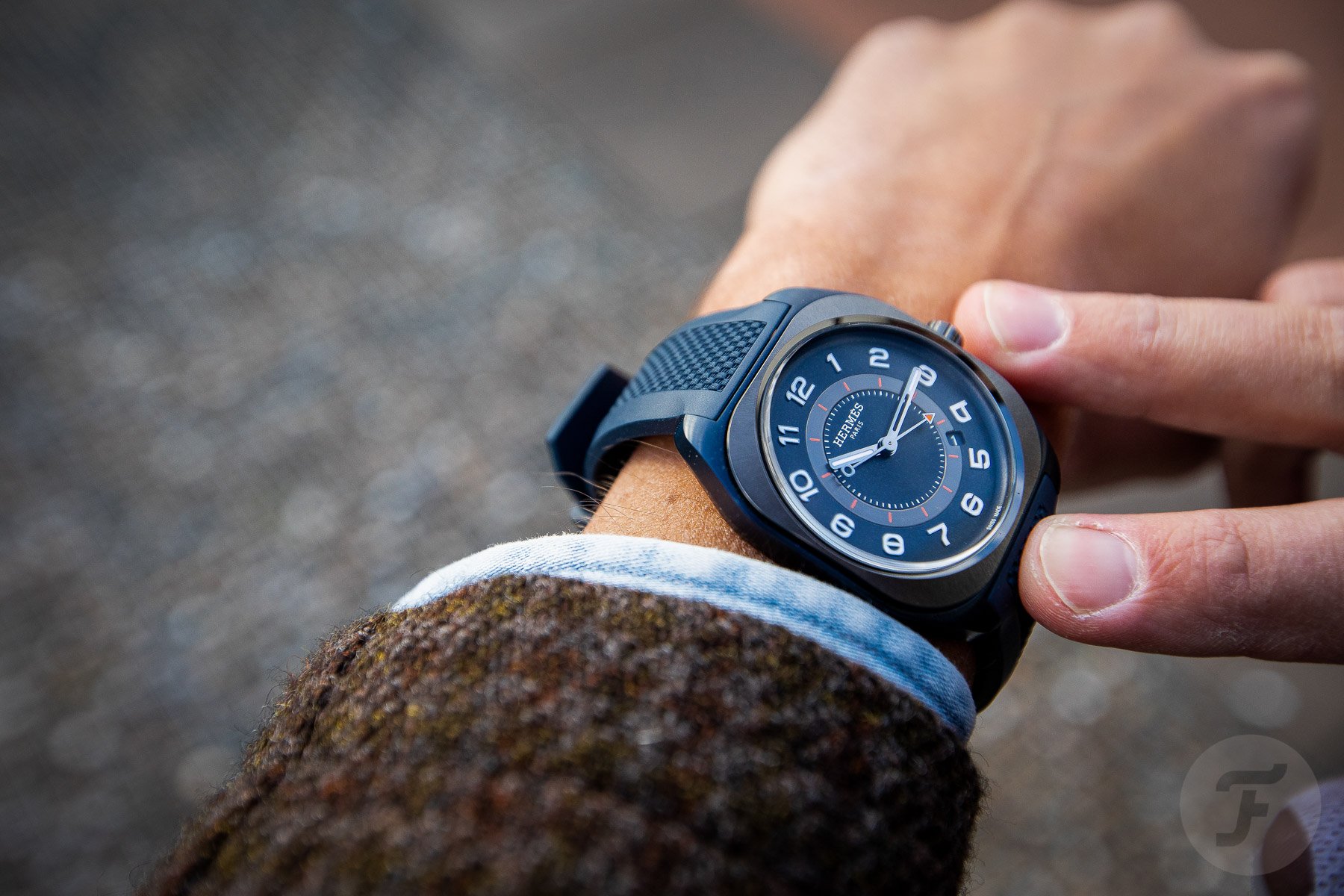 The comfort of rubber

I can’t think of leather straps that are nicer to wear, better finished, and more aesthetically pleasing than the ones produced by Hermès. To my surprise back in 2021, the H08 on a rubber strap looks the part. Rubber fits the design of the watch. And rubber wears nicely too, although I understand that’s a personal opinion. Another opinion of mine is that a rubber strap doesn’t need a folding clasp, but rather works and wears best with a pin buckle. The pin buckle won’t damage the rubber as it would do over time to a leather strap, and it keeps things simple, both functionally and visibly. A folding clasp, in my view, gives people a false idea of luxury. Interestingly, the folding clasp is designed to look like a pin buckle. Why? What’s the point? 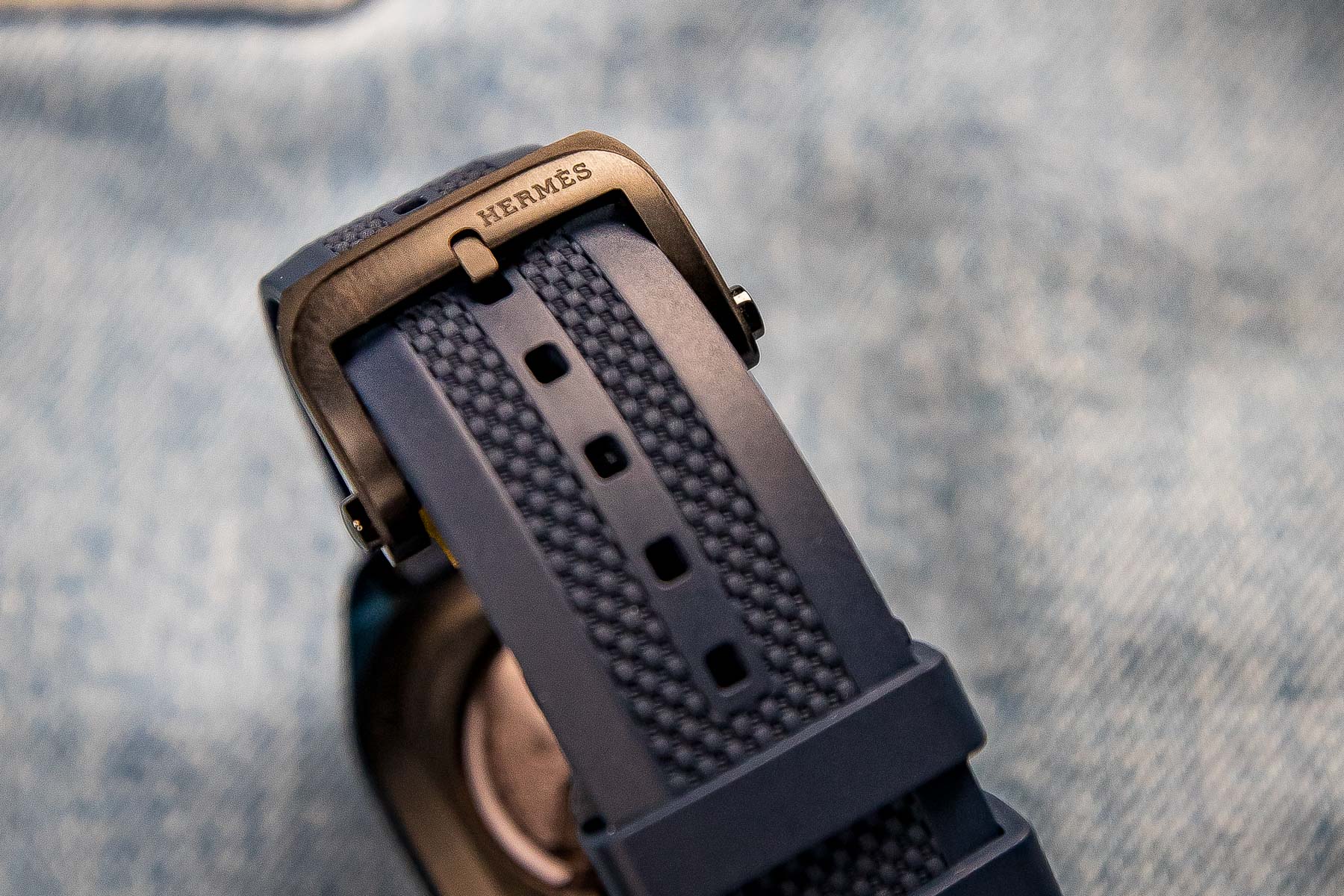 The whole folding clasp/pin buckle-lookalike situation is missing the point if you ask me. “Luxury is something that can be repaired” is an expression from Hermès. But to me, luxury is also something that is comfortable and forgoes unnecessary, complicating frills. Yes, luxury is a nicely detailed pin buckle. 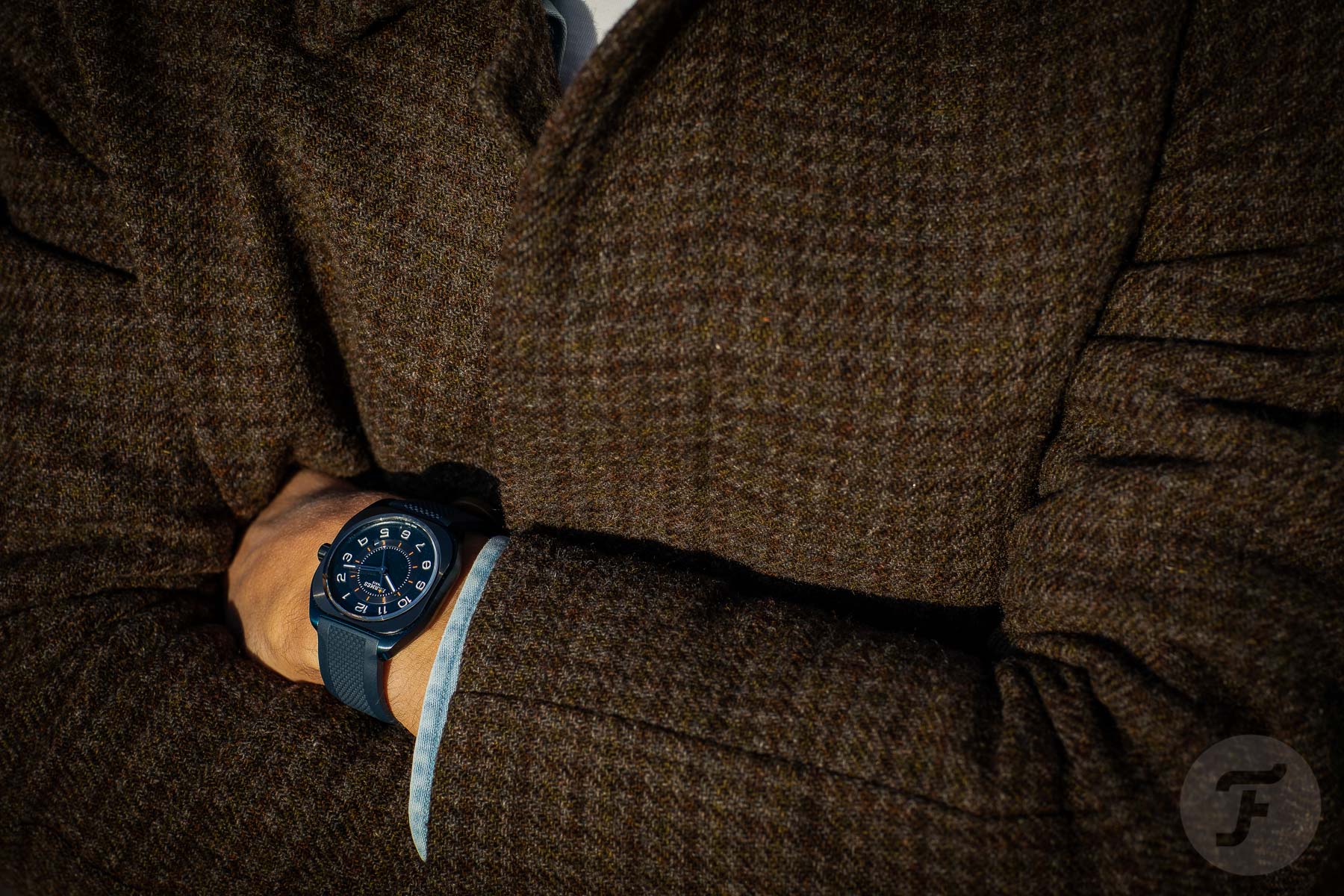 You probably don’t think of sports when Hermès comes to mind, but sporty stuff rules the world, you know. The world has become more and more informal, meaning that jeans and sneakers have now become accepted in situations in which casual wear was normally out of the question. The not-quite-cushion-shaped but also not-quite-square 39 × 39 × 10.96mm H08 is a casual watch, meticulously designed by Philippe Delhotal, the creative director of Hermès Horloger. And because of the well-balanced, even elegant design, it’s more of an urban timepiece than an outright sports watch, although it has a titanium screw-down crown, and it’s water-resistant to 100 meters. 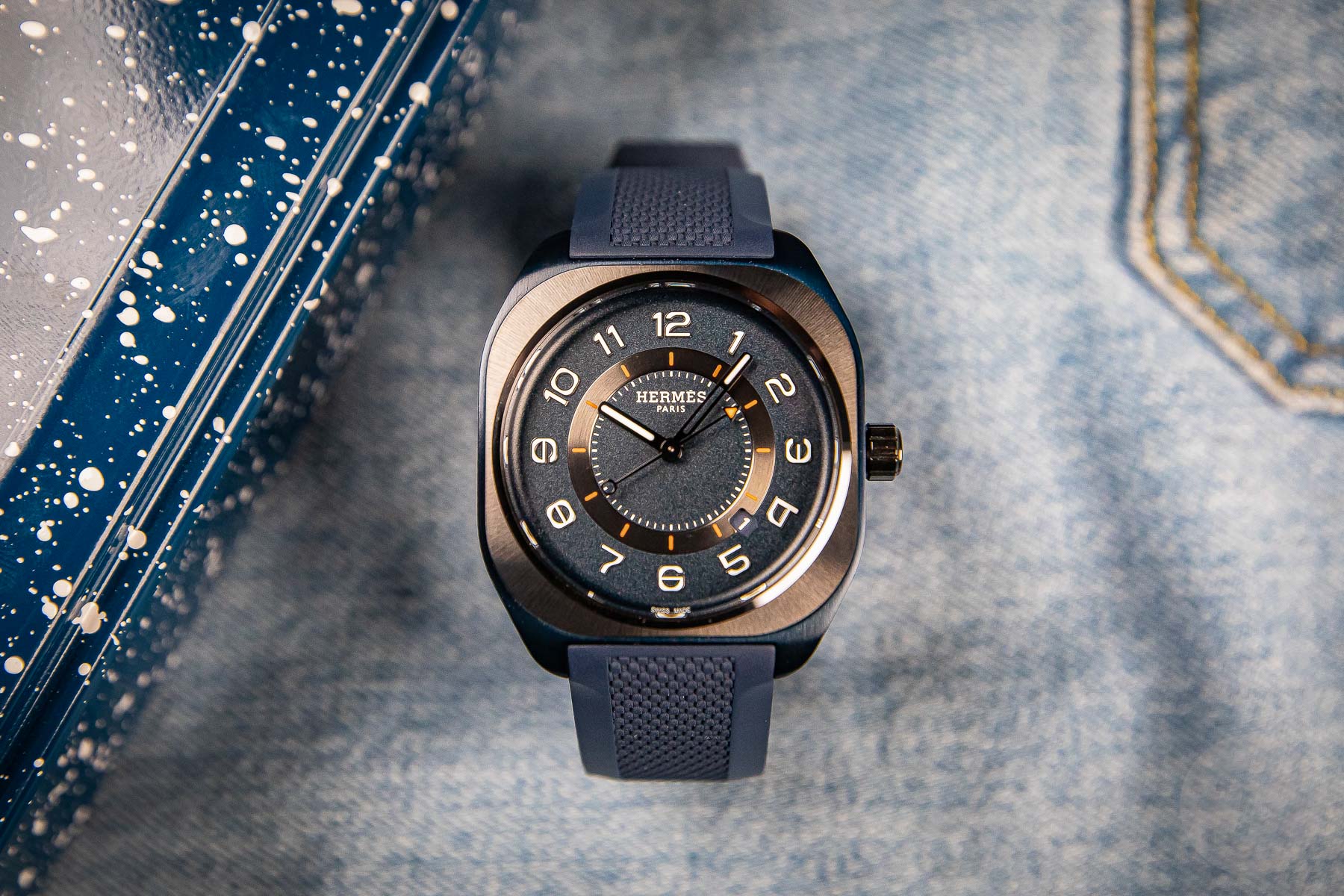 Blue titanium and black ceramic plus a mysterious reflection of color

In some lighting, it’s hard to tell the deep blue PVD titanium of the case and the black ceramic of the bezel apart. However, in other lighting and with, for instance, an orange object close to the watch, the black turns bronze-like, just like the polished black ring on the dial. It’s the blue PVD-treated dial with its different textures and finishes that helps distinguish the two dark colors. The dial ties the watch together with its subtle orange accents and elegant white Arabic numerals in their on-point typeface. The black hour, minute, and seconds hands allow good readability, and the date at four-thirty is not too provocatively present. The mix of materials, textures, and shapes creates a dynamic-looking timepiece. It is simply energetic, and the rubber strap with its integrated, textured look only helps complete the picture. 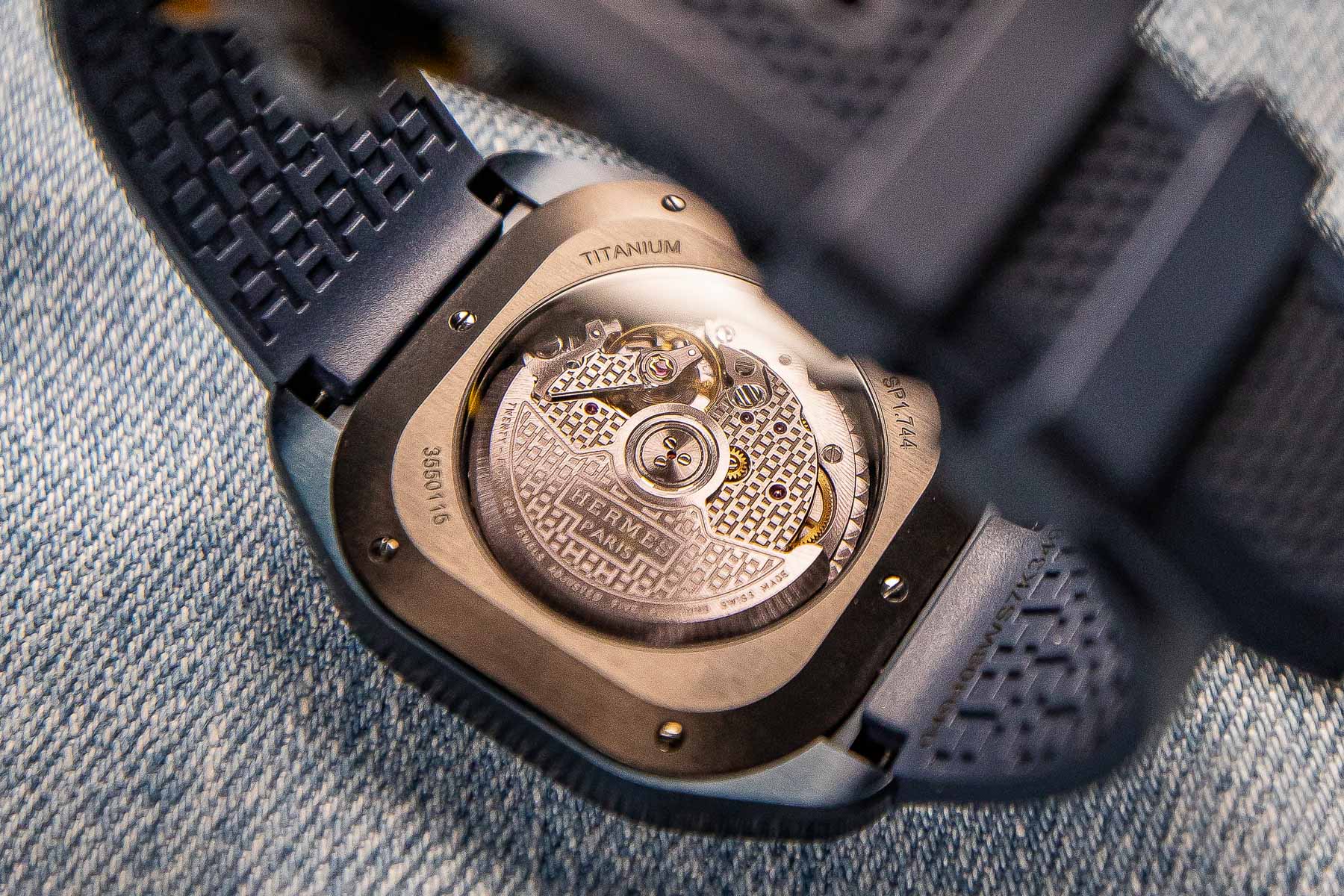 The movement will match your belt buckle

The movement that Hermès uses for its new H08 Blue Edition is the self-winding mechanical caliber Manufacture Hermès H1837. Now, I could start an engaging debate on the subject “what is ‘manufacture’?” after telling you that the movement is made by Vaucher. In 2006, Hermès acquired a 25% stake in Vaucher. Does that make the 3.7mm-thick caliber H1837 that’s based on the Vaucher VMF 3000 a quarter in-house? I don’t want to start a debate, but I am curious about what you think, so let me know in the comments (but please don’t forget to also mention something about the watch itself!). What’s non-debatable, however, is the fact that it’s a 4Hz movement with two barrels and a 50-hour power reserve. Additionally, the bridges and rotor of the movement are lavishly decorated with the Hermès “H” pattern, so it will match your belt buckle. 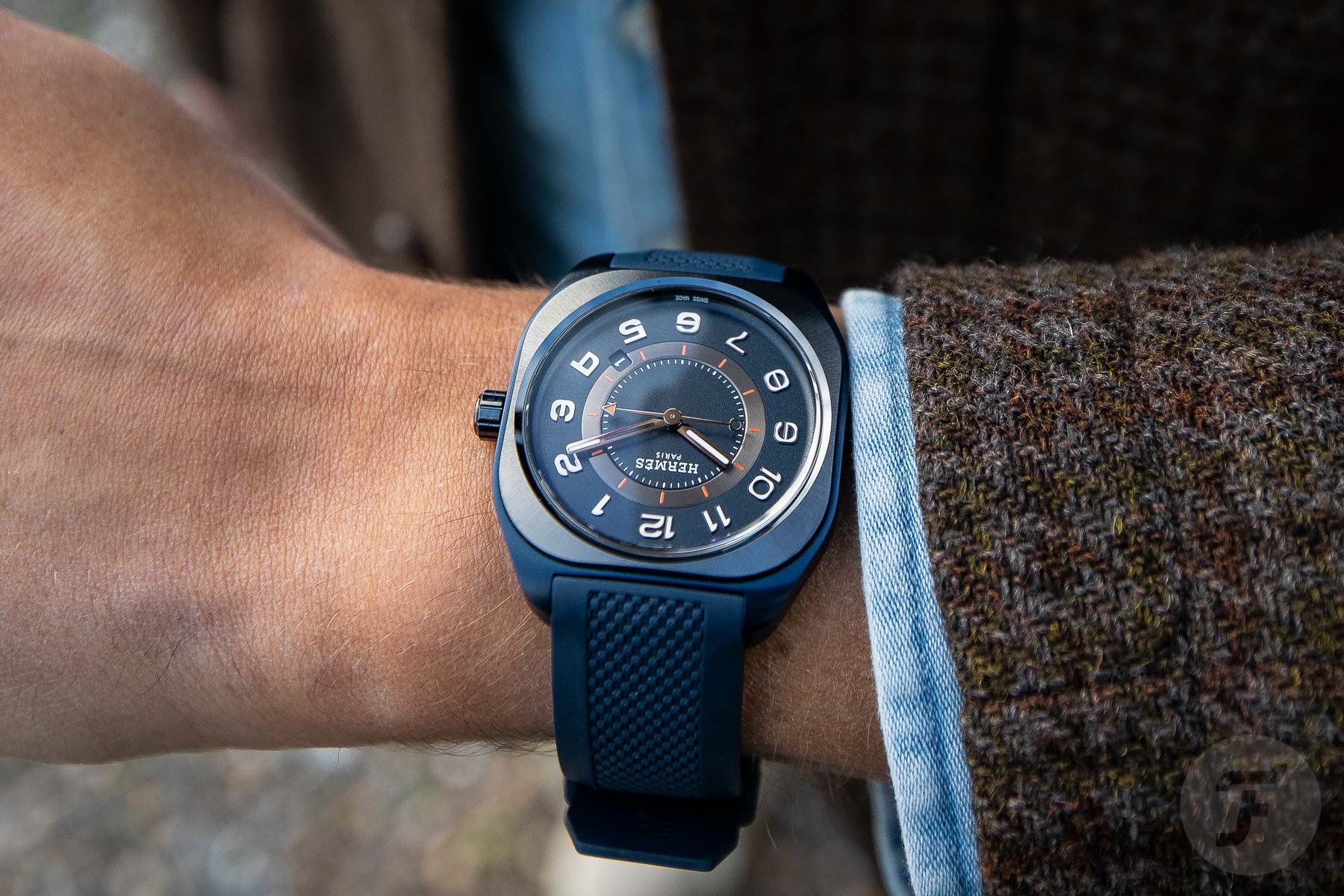 The combination of shape and colorway of the Hermès H08 Blue Edition had different effects on me. Sometimes I thought it looked too much like a smartwatch, the name of which I will not write. But just moments later, I fully sensed, experienced, and saw the luxurious qualities of the watch. The built quality is fantastic, and so is the finishing. And the attention to detail and the matching of colors, shapes, and textures leave no room for doubt that this Hermès H08 Blue Edition is not a run-of-the-mill, mass-produced object. It’s also way too distinguished, refined, and subtle to be a watch worn best with an I Nerazzurri football jersey. This blue and black watch has a dynamic character and a sporty spirit, and it is fashionable without being dandy. It matches nicely with the Hermès men’s ready-to-wear collections.

If you’re familiar with the prices of Hermès fashion, the €6,900 price of the H08 Blue Edition will not be a big surprise. For others outside the Hermès universe, the price might take some getting used to. I’m talking to the purist watch aficionados here, those who tend to stick to the traditional Swiss manufacturers and regard a watch with “Hermès” on the dial as a fashion watch. Yet, the Hermès H08 Blue Edition is definitely worth a look. The high-grade finishing and the movement inside the well-shaped case are just two of several reasons. Not to mention, the looks of the watch will please almost anybody.

Don’t try to buy the Hermès H08 Blue Edition online. It’s only available in stores and not through e-commerce platforms. It’s not even listed on the Hermès website, but you can head over there to find the store nearest you.